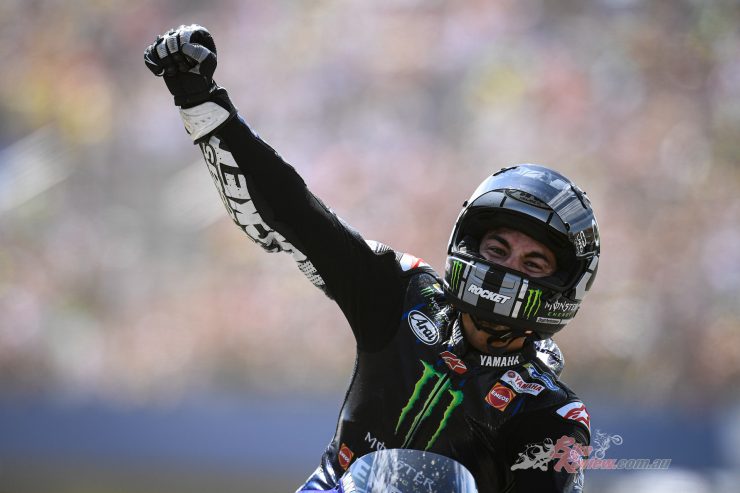 MotoGP News Vinales takes on Marquez and comes out on top

Maverick Vinales (Monster Energy Yamaha MotoGP) has taken a stunning Grand Prix win at the Motul TT Assen, stalking the front before striking for the lead and stretching his legs to pull away from reigning Champion Marc Marquez (Repsol Honda Team). Fabio Quartararo (Petronas Yamaha SRT) followed up his record-breaking pole position on Saturday with another podium, impressing once again even as he continues to recover from arm pump surgery. 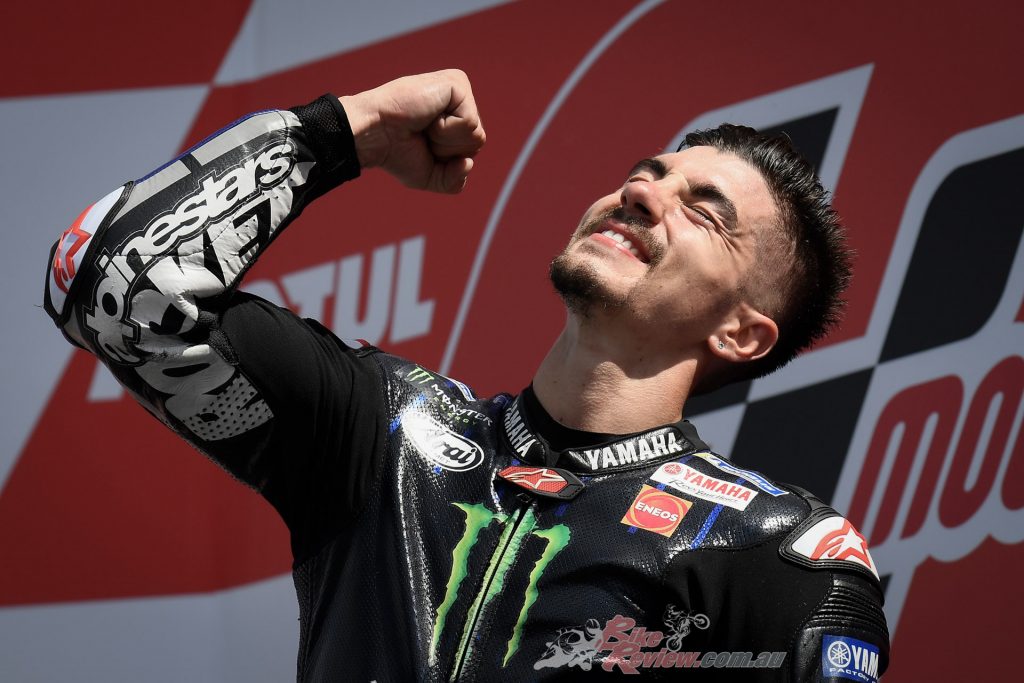 Alex Rins (Team Suzuki Ecstar) took the holeshot from third on the grid, the Suzuki man streaking away from the line and soon joined by impressive rookie teammate Joan Mir as he slotted into second. Quartararo didn’t retain P1 but he stayed third after a solid start, with eventual winner Vinales the man initially losing out a little. Marquez was next up, with Andrea Dovizioso (Ducati Team) harrying teammate Danilo Petrucci just behind. 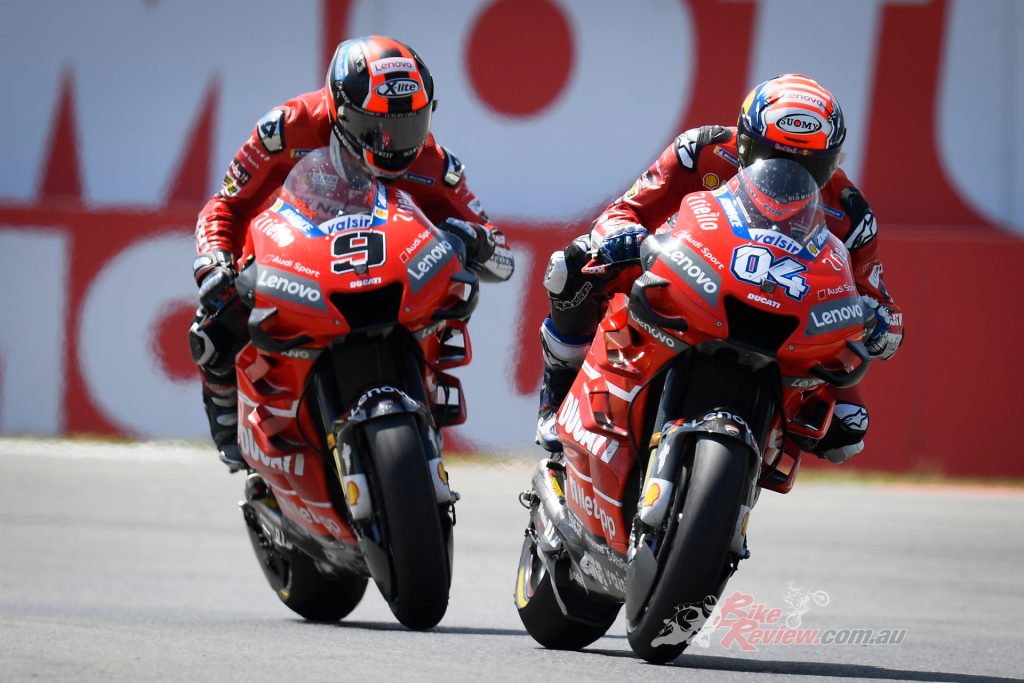 At the start of Lap 2 Vinales made his first move to take Marquez, but then all eyes on were the lead as Rins suddenly slid out…leaving Mir under the pressure of leading a premier class race for the first time, and Quartararo in second for a rookie 1-2. The number 36 then headed a bit wide and the number 20 sliced through, with Vinales taking over in second and Marquez up into third.

Mir had been shuffled back into fourth but Dovizioso soon struck, having passed teammate Petrucci to begin his assault on the front, before there was another strike of bad luck lightning as Vinales headed wide from the lead. Marquez took over, stalking Quartararo, with Dovizioso then within touching distance of the number 12 Yamaha as he got shuffled back. Marquez tried to attack, Quartararo resisted, and Vinales was then back on their tail and it was a trio locked together in the lead. 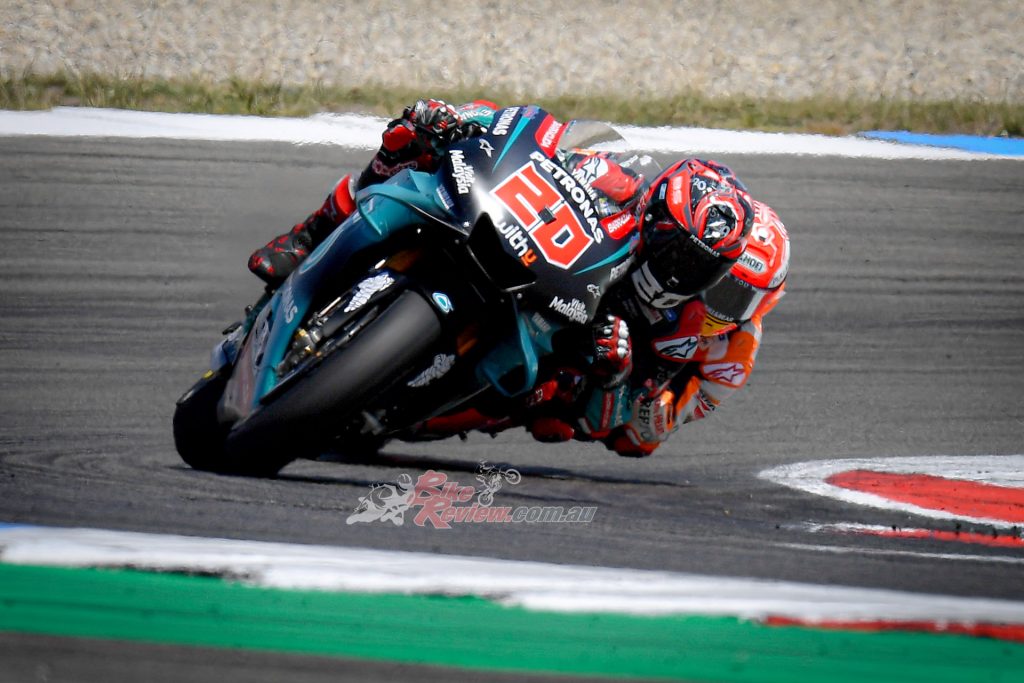 That was how it would stay for much of the race. Vinales overcooked Turn 1 but reeled them back in, Marquez attacked Quartararo a lap later after a wobble for the Frenchman, and then Marquez had his own moment and the rookie was back in the lead. The trio were once again line astern, uneasily holding station.

With 11 to go, Vinales broke the stalemate. He attacked Marquez and got through before then homing in on Quartararo, pouncing where Marquez had earlier as the Frenchman struggled again with a bit of a wobble at high speed. But a small error soon after cost him and Marquez took over in P1. Would that be the number 93’s chance to pull the pin? 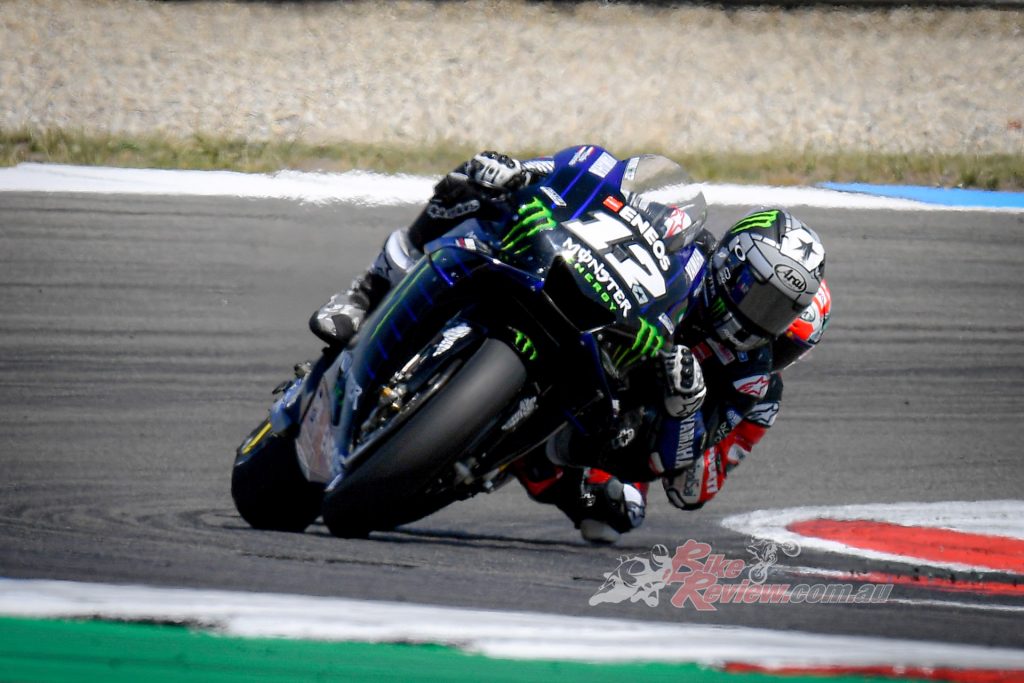 Maveric Vinales on the charge Assen 2019

No chance. Vinales sliced back through as swiftly as he could, and the two were starting to gap Quartararo behind. With six laps to go they were still both locked together and there was nothing in it, but gradually then, Vinales started taking a tenth here and a tenth there.

Finally, it seemed the number 12 had broken the Honda rider. The top three had all had their share of mini dramas during the race, but Vinales was then pitch perfect to the flag. Eventually, the gap was nearly five seconds over the line and the Spaniard celebrated in style. It’s his first win since Phillip Island last year, Yamaha’s first of the season and one of his most impressive rides. 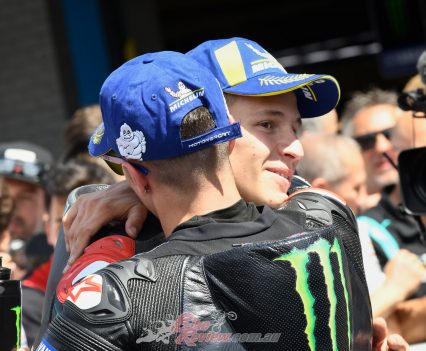 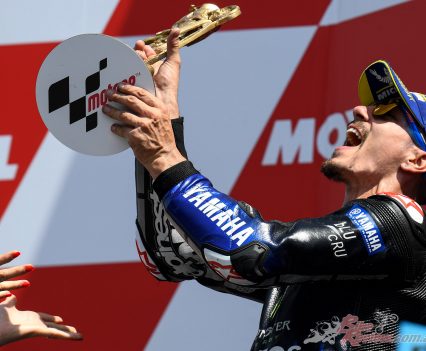 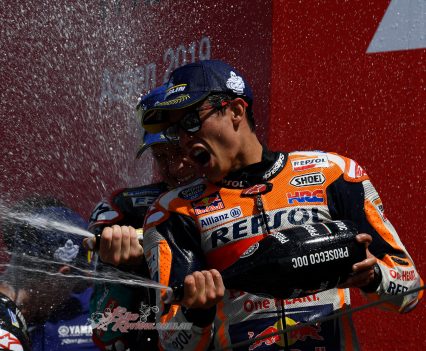 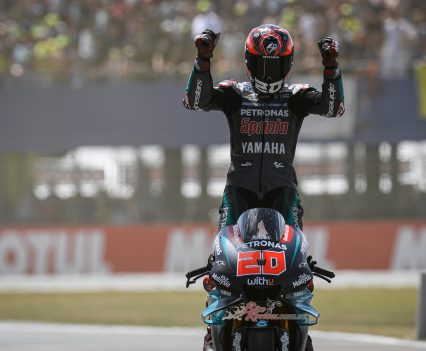 Quartararo took his second podium in succession in third as he managed to last the distance, ever-impressive as he continues to makes waves in MotoGP. Dovizioso was the man behind him, locked in battle with Petrucci and Franco Morbidelli (Petronas Yamaha SRT) for much of the race and coming out on top. Morbidelli eventually just beat Petrucci to complete the top five and equal his best ever premier class result.

There were a few names missing from the finishers along with Rins, the biggest of which was Valentino Rossi (Monster Energy Yamaha MotoGP). The ‘Doctor’ lost the chance at a ride back through the field as he collided with Takaaki Nakagami (LCR Honda Idemitsu) and both went down, making it a difficult run of three for the number 46 of late. 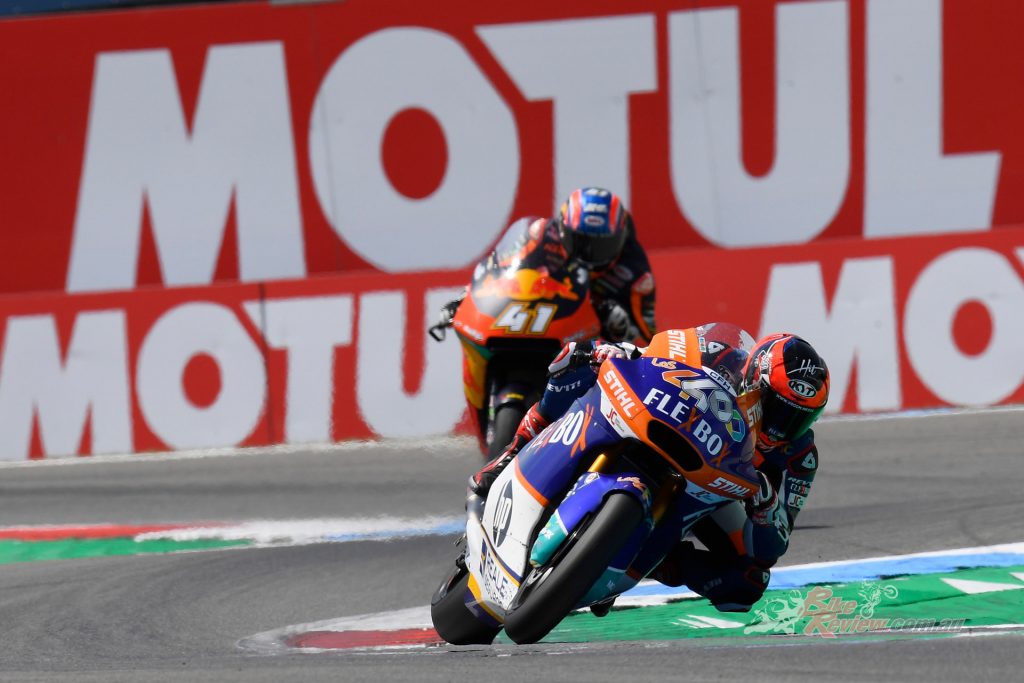 Moto2
Augusto Fernandez (Flexbox HP 40) is a man in form and the Motul TT Assen saw his run of firsts finally culminate in a first ever Grand Prix as he became the 37th different winner in Moto2, a fitting statistic for the rider who made his way to the MotoGP World Championship racing that very number. The Spaniard was a force to be reckoned with in a manic fight at the front throughout and came through the chaos of a clash between Championship rivals Alex Marquez (EG 0,0 Marc VDS) and Lorenzo Baldassarri (Flexbox HP40) to beat Brad Binder (Red Bull KTM Ajo) to the flag by tenths.  Completing the podium after the war of attrition was Luca Marini (Sky Racing Team VR46), with Tom Lüthi (Dynavolt Intact GP) just behind the Italian but the P4 enough for the Swiss veteran to become the new Championship leader.

It was Binder who took the holeshot from P2 on the grid, with Xavi Vierge (EG 0,0 Marc VDS) also able to leapfrog polesitter Remy Gardner (ONEXOX TKKR SAG Team) in the early stages. Alex Marquez remained P4, with Lüthi making gains into fifth. Sam Lowes (Federal Oil Gresini Moto2) was another key player in the group as it remained a tight fight minus Binder, who had begun to make a gap at the front.

Remy Gardner was able to hunt the South African back down soon enough, however, and set about trying to get past. But a wobble for the Aussie dropped him back down to fourth as the front squabble suddenly really set alight. Lowes moved through to attack Binder, Binder hit back, and the lead group set about going to war: Binder, Lowes, Vierge, Fernandez, Marquez, Gardner and Lüthi. Rookies Jorge Martin (Red Bull KTM Ajo) and Enea Bastianini (Italtrans Racing Team) arrived on the scene soon enough though – joined by Marini.

With 14 to go the first big drama hit as Gardner crashed out due to gearbox issues, and then Martin tagged Lowes and the Brit went down, taking another player out the group. The Spanish rookie was the next man to crash in the race of attrition, just as teammate Brad Binder was back in front and trying to pull the pin. That set Alex Marquez in motion as the former Championship leader sliced through to lead the chasing pack, eager to close him down on the hunt for a fourth win in a row.

Vierge then crashed, and it was another key moment in the race as Bastianini was caught up in it and Lüthi too, but the Swiss veteran somehow stayed on. At the front, that left four men and soon enough Binder had been caught and passed by Marquez and then both Flexbox HP 40 riders. Then, more drama struck.

With two laps to go Marquez was still ahead, with Baldassarri tagged close behind. But suddenly the Italian went for a move and slid out, taking the former Championship leader with him and leaving Fernandez within touching distance of the win. Able to hold of Binder, he took his first Grand Prix win as the South African got back on the podium and converted a much-improved weekend for KTM into a top haul of points. Marini, able to pick his way through the chaos, completed the podium as he just staved off Lüthi.

After the chaos and attrition in Assen, it’s Lüthi in the lead now and the Swiss rider has six points of advantage. Marquez drops to second, Baldassarri is now just behind teammate Fernandez…there’s everything to play for in Germany and we’re back in action in just a few days’ time. 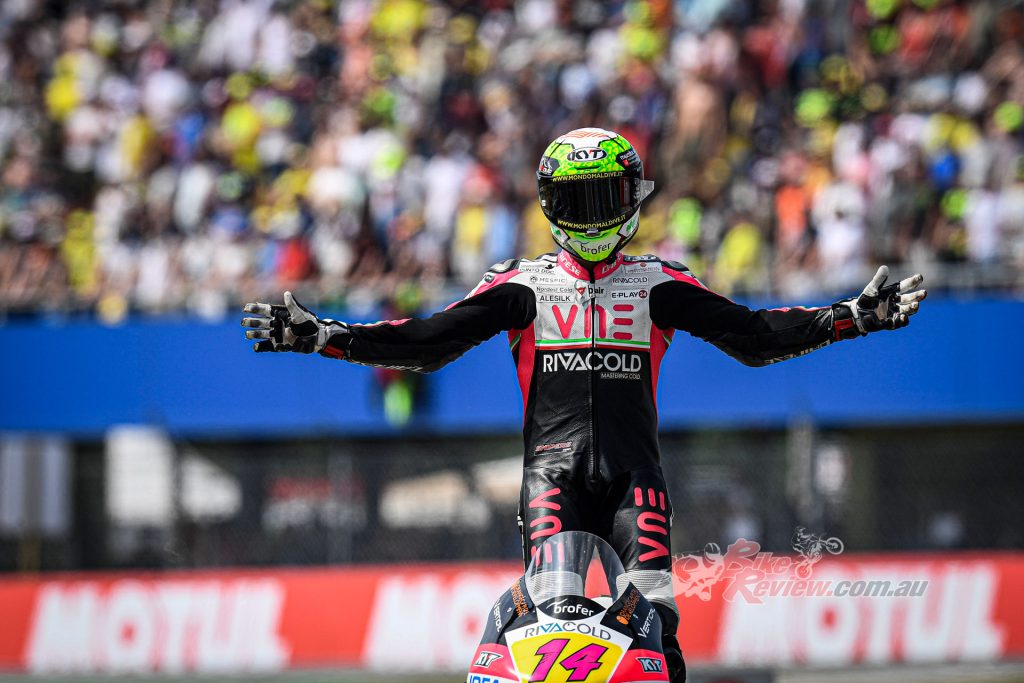 Tony Arbolino (VNE Snipers) has become the first man this season to win two Moto3 races, with the Italian holding off Lorenzo Dalla Porta (Leopard Racing) to cross the line just 0.045 clear in the Motul TT Assen. Jakub Kornfeil (Redox PrüstelGP) took third and his first podium since Brno last year despite a Long Lap Penalty in the latter stages; the Czech rider leading at the time before the last-gasp drama.

It was Niccolo Antonelli (SIC58 Squadra Corse) who took the holeshot from pole, with Arbolino slotting in behind him and the huge freight train group at the front stuck line astern in classic Moto3(tm) style. One of the biggest moves early on saw Kaito Toba (Honda Team Asia) take over at the front and keep it through the final chicane, with the Japanese rider leading the pack over the line with 19 laps to go. A few laps later came another key move: Romano Fenati (VNE Snipers) was up in the top trio taking on Arbolino and Toba from 13th on the grid, and with 16 to go he sliced through to lead but there was plenty more action to come.

Chopping and changing, the fight for the ‘lead’ remained a huge group stretching far beyond the final chicane as the snake of riders threaded the needle towards the line. But after a battle royal of a shuffle, one moment would change that with six laps to go…

Toba collided with Celestino Vietti (Sky Racing Team VR46), taking down Raul Fernandez (Angel Nieto Team) on the outside, and Tatsuki Suzuki (SIC58 Squadra Corse) then got caught up in the drama. That created a gap in the group, with Lorenzo Dalla Porta then at the head of train of just seven riders then battling for the win.

Not long after that, Jakub Kornfeil was the man in charge. Hitting the front with a handful of laps to spare, the Czech rider was in some clear air but track limits were about to bite as he was given a Long Lap Penalty. From then, he had three laps to take it and the race result looked like it could all rest on when he did – or even if, with the team putting the pit board out make sure he definitely saw it as soon as possible.

Luckily, he did, and heading into the area to take it released Lorenzo Dalla Porta into the lead with two laps to go. Could the Italian do it and become the 13th different winner in a row? It was all down to the final lap, and the number 48 machine had a duel on his hands against the man who just beat him to the flag at Mugello: Arbolino. Would he wait for a last gasp move?

The number 14 struck just before the final chicane, cleanly getting past and setting up what would become a drag to the line as the kept it pinned and Dalla Porta tried to respond. Sadly for the Leopard Rider, however, he would once again be the bridesmaid rather than the bride, with Arbolino just a whisker ahead to become the first repeat winner and launch himself into the title fight.

Kornfeil had emerged from his penalty into third, and the Czech rider was able to keep it together to stay ahead of another group fight and cross the line for the podium. Gabriel Rodrigo (Kömmerling Gresini Moto3) by half a tenth, with John McPhee (Petronas Sprinta Racing) putting in a stunning ride to complete the top five from outside the top twenty on the grid.

Romano Fenati took P11 after getting shuffled back in the latter stages, ahead of Championship leader Aron Canet (Sterilgarda Max Racing Team) after a tougher round for him. Nevertheless, he remains seven points ahead. Kazuki Masaki (BOE Skull Rider Mugen Race) and Filip Salac (Redox PrüstelGP) completed the group fighting it out, with Sergio Garca (Estrella Galicia 0,0) completing the points.