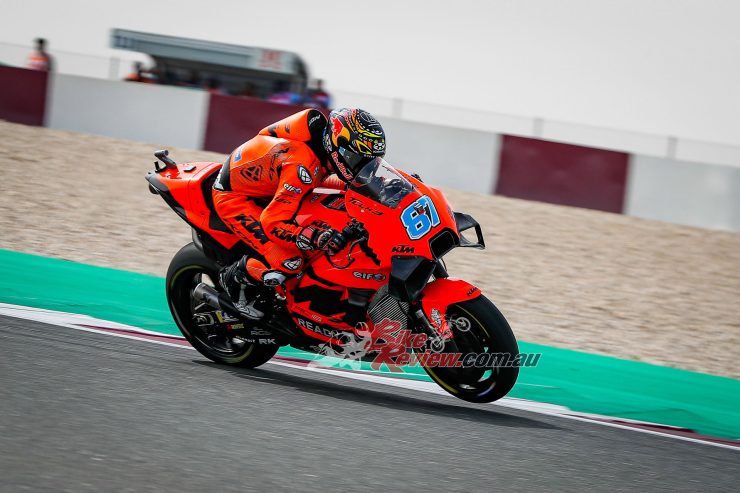 MotoGP Rd1: Friday at the Grand Prix of Qatar

More Suzuki power? Day 1 certainly suggests so. Alex Rins (Team Suzuki Ecstar) topped the timesheets on the first day of 2022 as MotoGP™ returned to blistering action at the Grand Prix of Qatar, with teammate and 2020 Champion Joan Mir in third and MM #93 2nd. 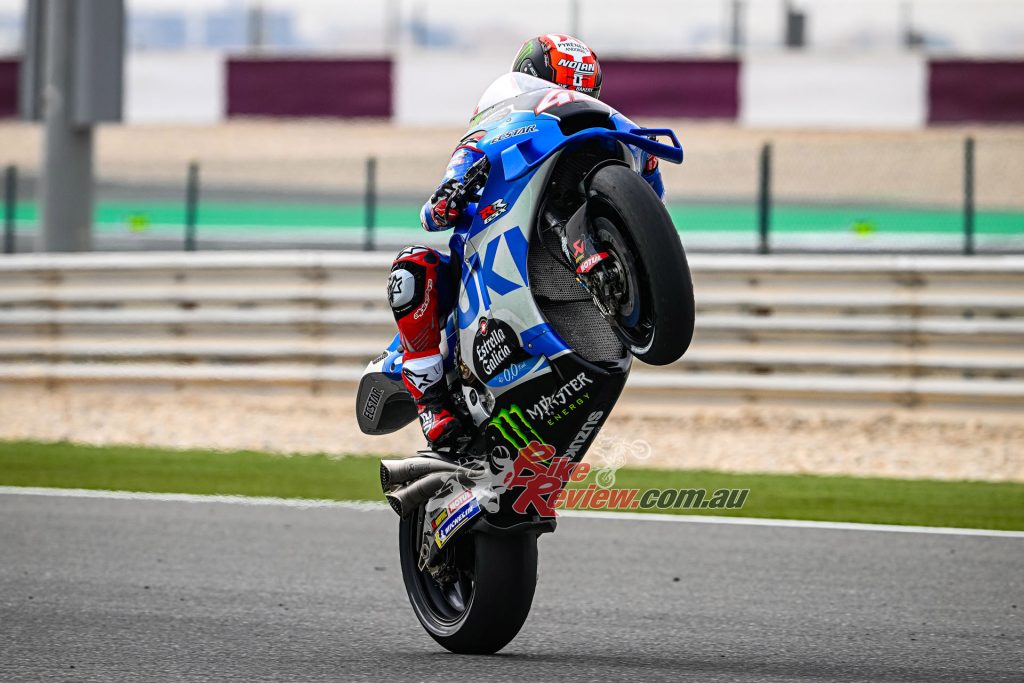 Alex Rins has topped Friday Practice at the Grand Prix of Qatar.

FP1
Red Bull KTM Factory Racing’s Brad Binder pipped Takaaki Nakagami (LCR Honda Idemitsu) to the first MotoGP™ P1 of the season, lunging to the top with a 1:54.851. It was close, however, with 0.056 between the two. Rins rounded out the top three. 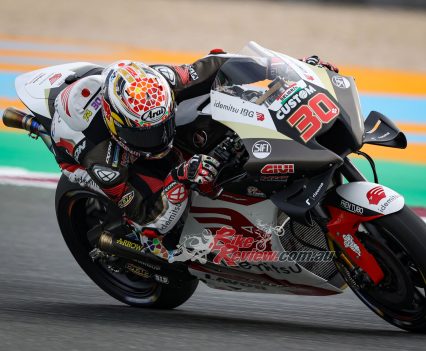 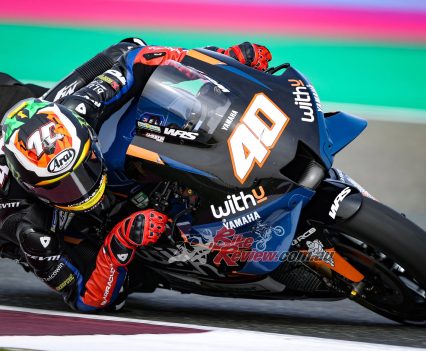 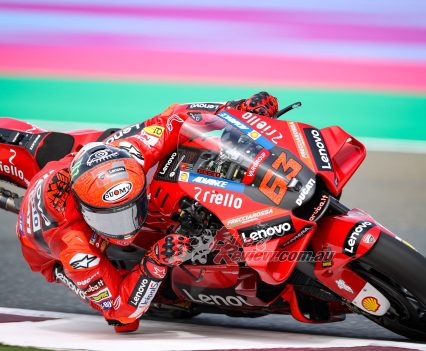 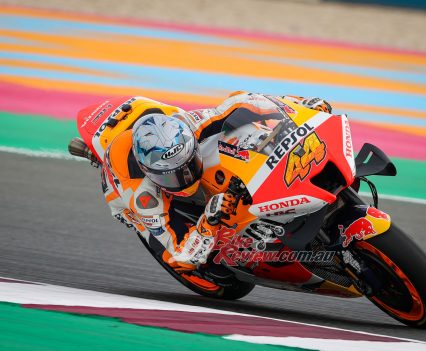 Pol Espargaro and Repsol Honda Team teammate Marc Marquez made it three Hondas in the top five to kick off the season too, with just 0.2s splitting the fastest quintet. 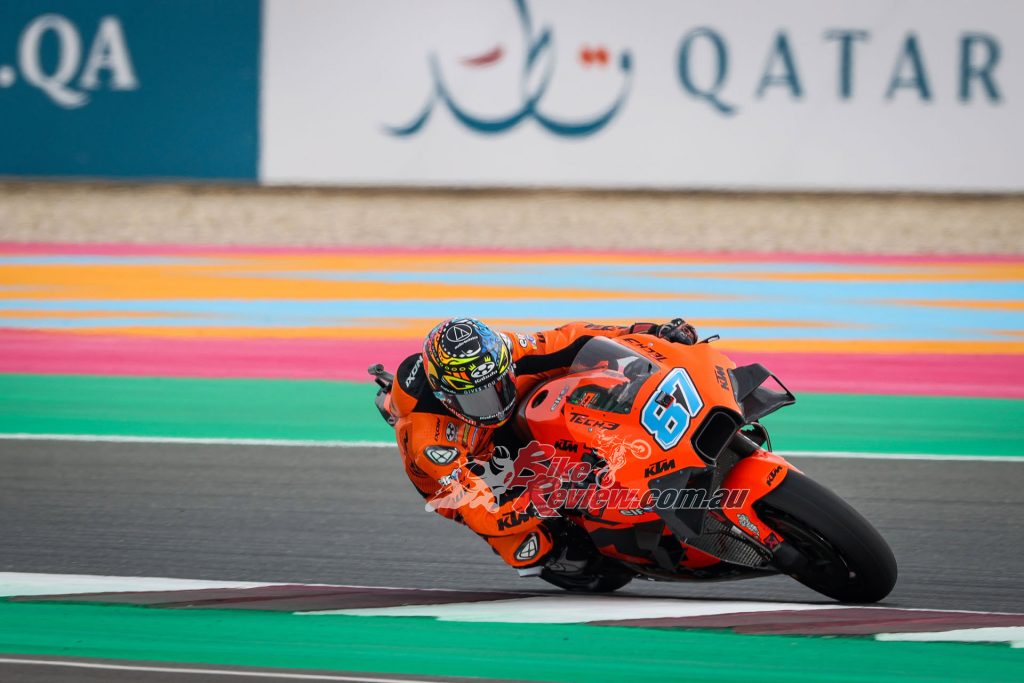 Remy Gardner in his first full day of official round practice has finished in 21st.

Check out our huge gallery of day one from Qatar, click here

Darryn Binder (WithU Yamaha RNF MotoGP™ Team) encountered an early issue when his YZR-M1’s belly pan was loose, but nothing came of it for the South African rookie. Fabio Di Giannantonio (Gresini Racing MotoGP™) crashed unhurt with just over 15 minutes to go at Turn 3. 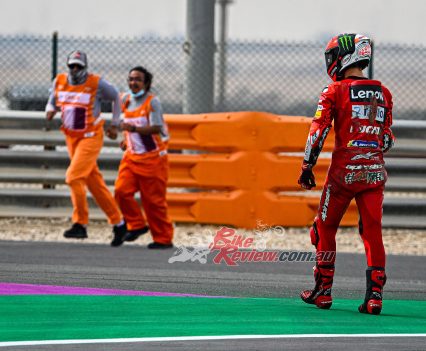 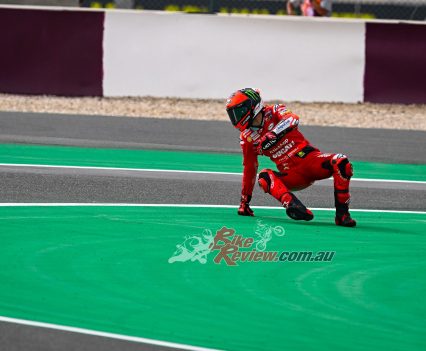 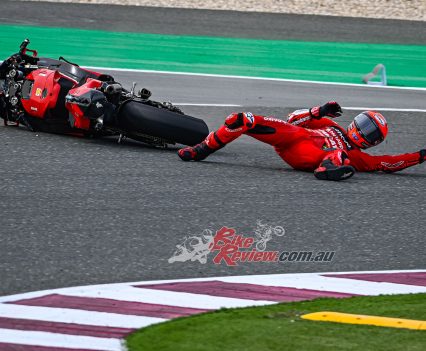 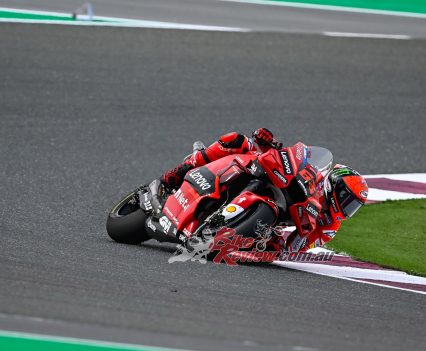 Francesco Bagnaia (Ducati Lenovo Team), the runner-up in 2021, then crashed at Turn 6 with five minutes to go – rider ok. The front of the Italian’s GP22 washed away early in the braking zone in an early mistake for Pecco in 2022 as he ended FP1 in P18. 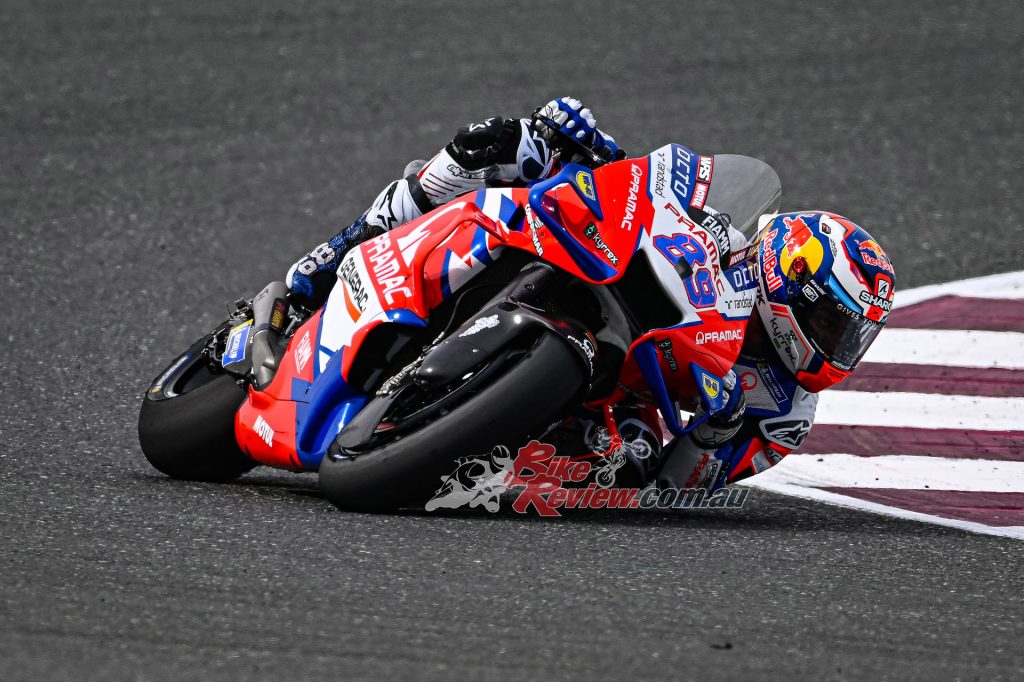 The riders got some valuable laps under their belts at the same time the race is going to be at on Sunday, but with 20 minutes to go, the time attacks started. Pol Espargaro climbed to the summit, then went even faster on his second flying lap on the soft tyres, the gap up to 0.4. A whole heap of rapid laps were about to appear, however. 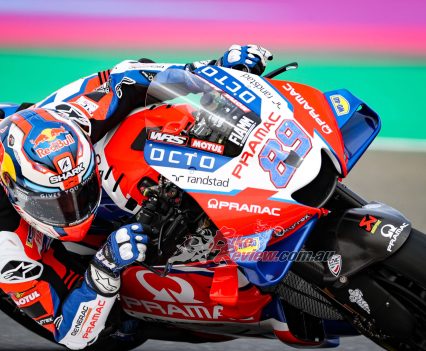 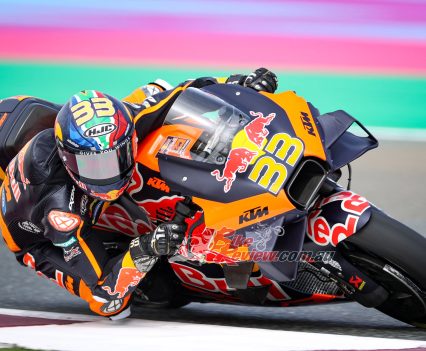 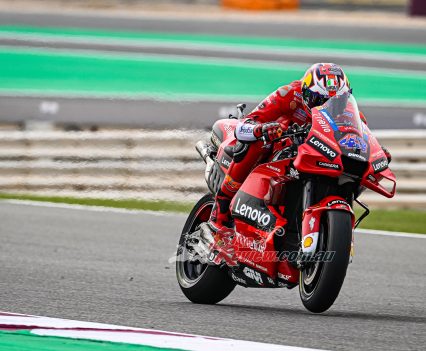 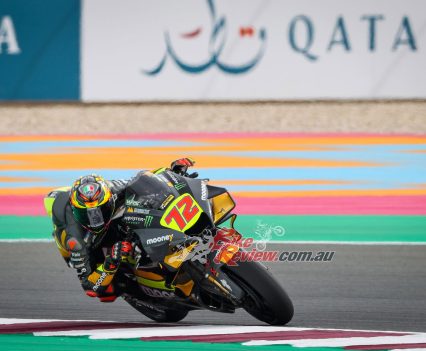 The first 1:53 came in from Mir with 13 minutes to go. That was swiftly beaten by Marc Marquez, the new benchmark a 1:53.711, but that didn’t stand as the fastest for long either – and it was Rins who struck back to go 0.174 clear. Jorge Martin (Pramac Racing) then closed the gap with two minutes to go, before Mir made it a Suzuki 1-2. It still wasn’t done, however, as Marc Marquez returned to P1 with a minute left on the clock. Again, though, Rins struck back and at the end of play, the Suzuki man is the rider to beat heading into Day 2. 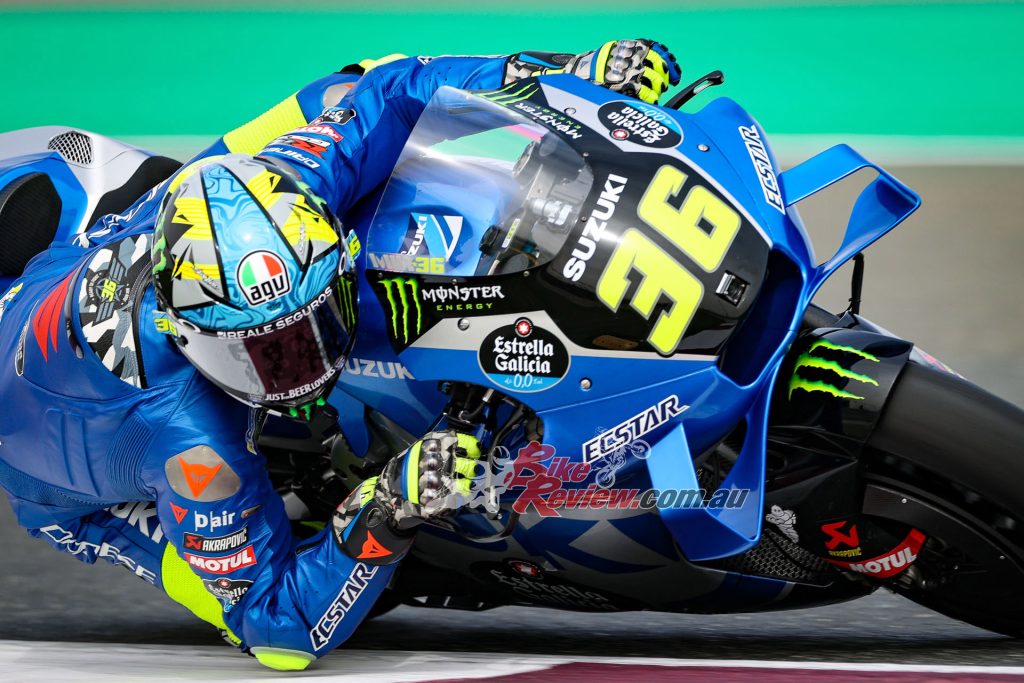 Luca Marini (Mooney VR46 Racing Team) crashed unhurt at Turn 1, and Alex Marquez (LCR Honda Castrol) crashed twice in quick succession in FP2, once at Turn 6 and then on the next lap at Turn 10 – rider ok. 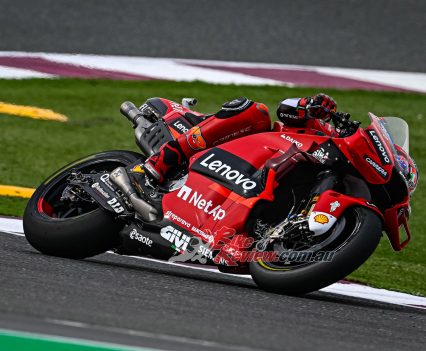 The fastest Yamaha was Franco Morbidelli (Monster Energy Yamaha MotoGP™) as a late time saw the Italian leap up the timesheets, with Jack Miller (Ducati Lenovo Team) sixth ahead of qualifying day in the desert 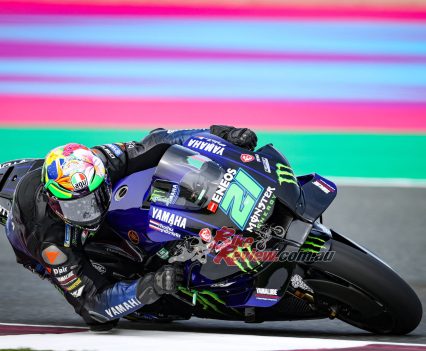 The fastest Yamaha was Franco Morbidelli (Monster Energy Yamaha MotoGP™) as a late time saw the Italian leap up the timesheets, with Jack Miller (Ducati Lenovo Team) sixth ahead of qualifying day in the desert

Provisional Q2 places
Behind Rins, Marc Marquez and Mir, Martin ends the day in P4 and as both top Independent Team rider and Ducati. For the most part, it had been a quiet day for the Borgo Panigale factory before the 2021 Rookie of the Year struck.

The fastest Yamaha was Franco Morbidelli (Monster Energy Yamaha MotoGP™) as a late time saw the Italian leap up the timesheets, with Jack Miller (Ducati Lenovo Team) sixth ahead of qualifying day in the desert. Aleix Espargaro grabbed P7 overall, despite nearly getting in a bit of a tangle with teammate Maverick Viñales on his final flying effort. 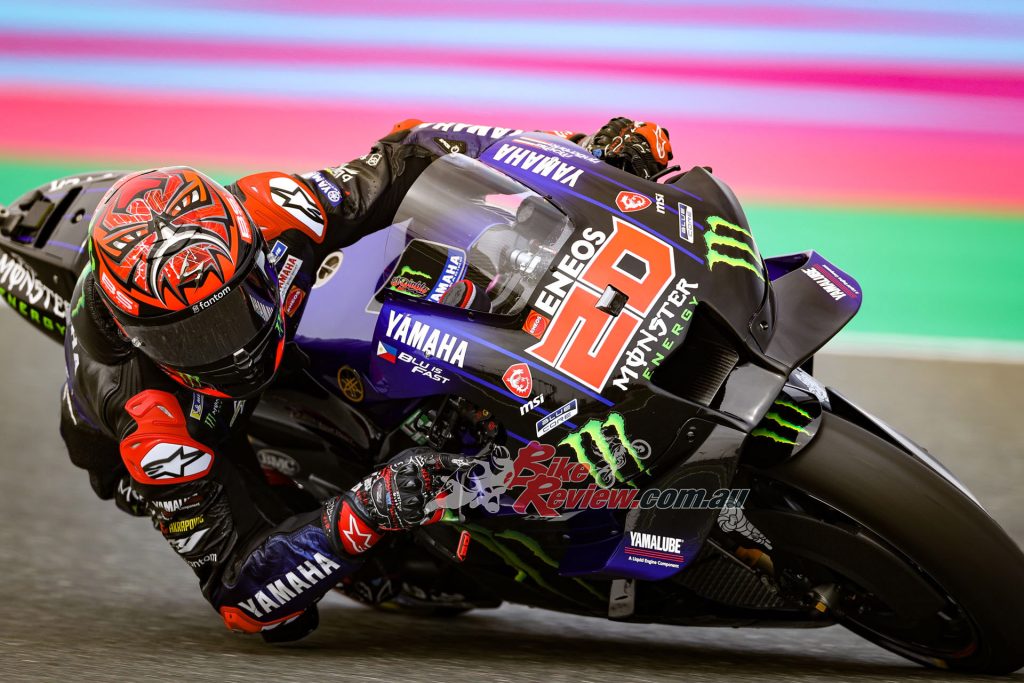 Reigning World Champion Fabio Quartararo (Monster Energy Yamaha MotoGP™) is four tenths off the pace in P8, just ahead of Pol Espargaro in ninth and Francesco Bagnaia (Ducati Lenovo Team) in tenth – the Italian sneaking into the top 10 after a crash at Turn 6 in FP1 dampened his first session.

0.8s splits the top 15 right down to FP1 pacesetter Brad Binder, and the riders outside the top 10 now face an uphill battle to try and earn an automatic Q2 place in the warmer, daytime conditions… see who can hit back on Saturday with FP3 at 13:15 (GMT +3), before qualifying for the first race of the season kicks off at 18:00. 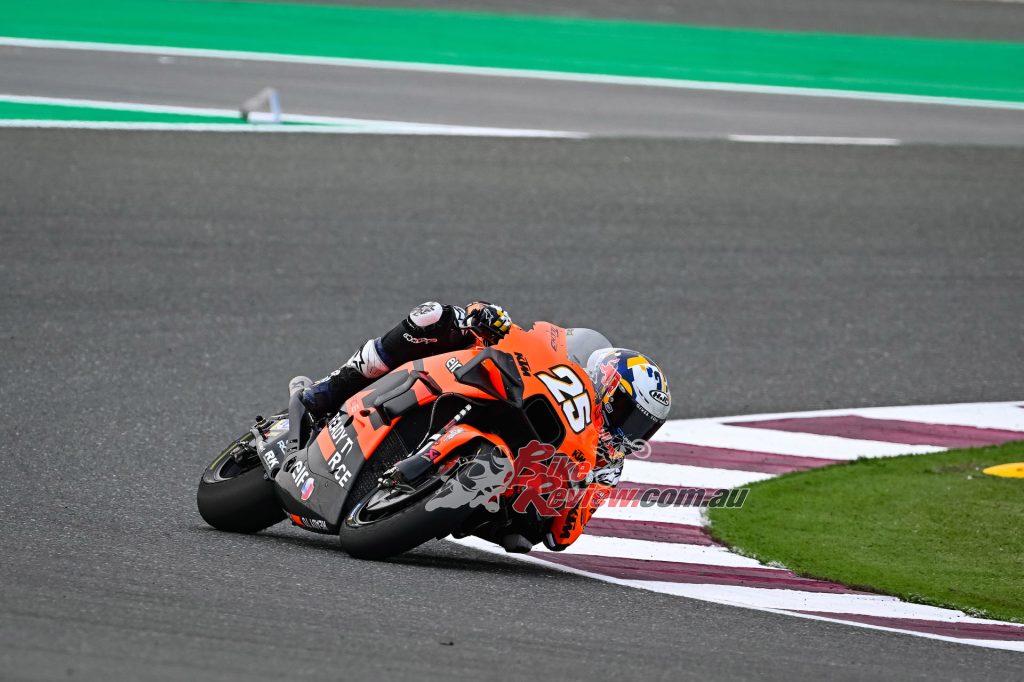 Augusto Fernandez (Red Bull KTM Ajo) ended the first day of 2022 Moto2™ at the top of the timesheets,

Moto2 Friday
Augusto Fernandez (Red Bull KTM Ajo) ended the first day of 2022 Moto2™ at the top of the timesheets, setting a 1:59.112 as his best lap but fastest in both sessions. The number 37 denied new teammate and rookie sensation Pedro Acosta by just over a tenth and a half, but the now number 51 still made it a Red Bull KTM Ajo 1-2 on Day 1. Marcel Schrötter (Liqui Moly Intact GP) – recovering from a broken hand – landed P3 late on.

Fermin Aldeguer (MB Conveyors Speed Up) was P4 and 0.393s away from Fernandez’s 2:00.290, with Aron Canet (Flexbox HP40) rounding out the top five ahead of reigning Moto3™ World Champion Acosta.

Lorenzo Dalla Porta (Italtrans Racing Team) suffered an issue with his machine with just over 15 minutes left of the session, rider ok. 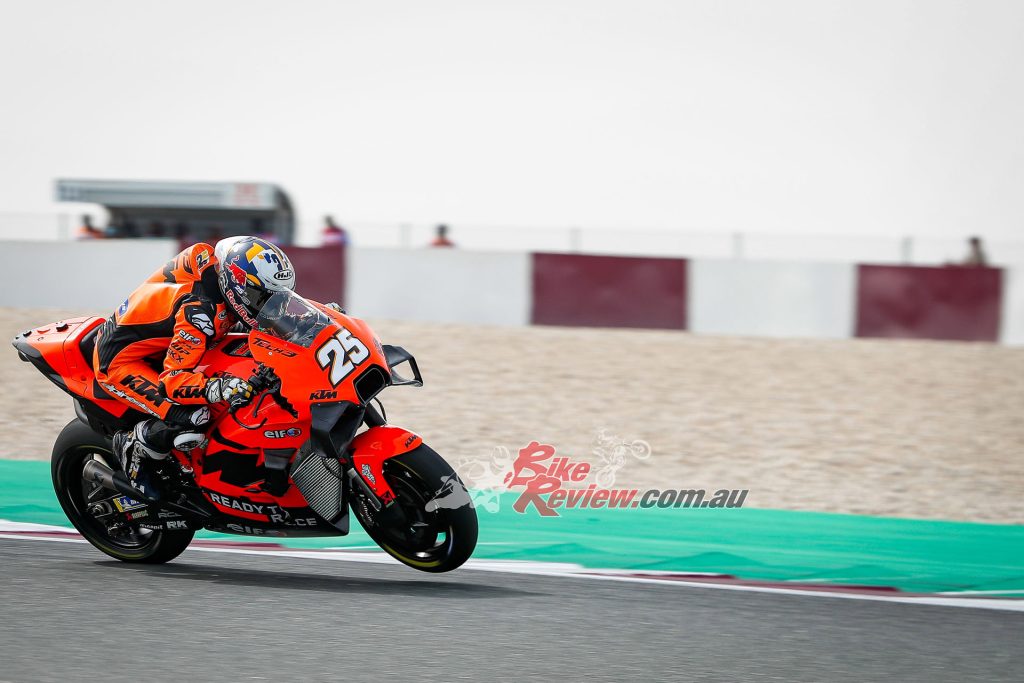 Behind Fernandez, Acosta and Schrötter at the top, Vietti edged out Canet by 0.004 as the pair finished P4 and P5 respectively.

FP2
The opening exchanges of FP2 were busy as track conditions allowed the riders to immediately improve their times. Dixon rose to the top on his fifth flying lap, before Canet moved the goalposts with just under 10 minutes to go. Acosta and Fernandez then exchanged P1 and Dixon crashed – unhurt – as he chased a time to go back to the summit. In the end, Fernandez held P1 from Acosta, with Schrötter rising to P3 on his last lap.

Provisional Q2 places
Behind Fernandez, Acosta and Schrötter at the top, Vietti edged out Canet by 0.004 as the pair finished P4 and P5 respectively. 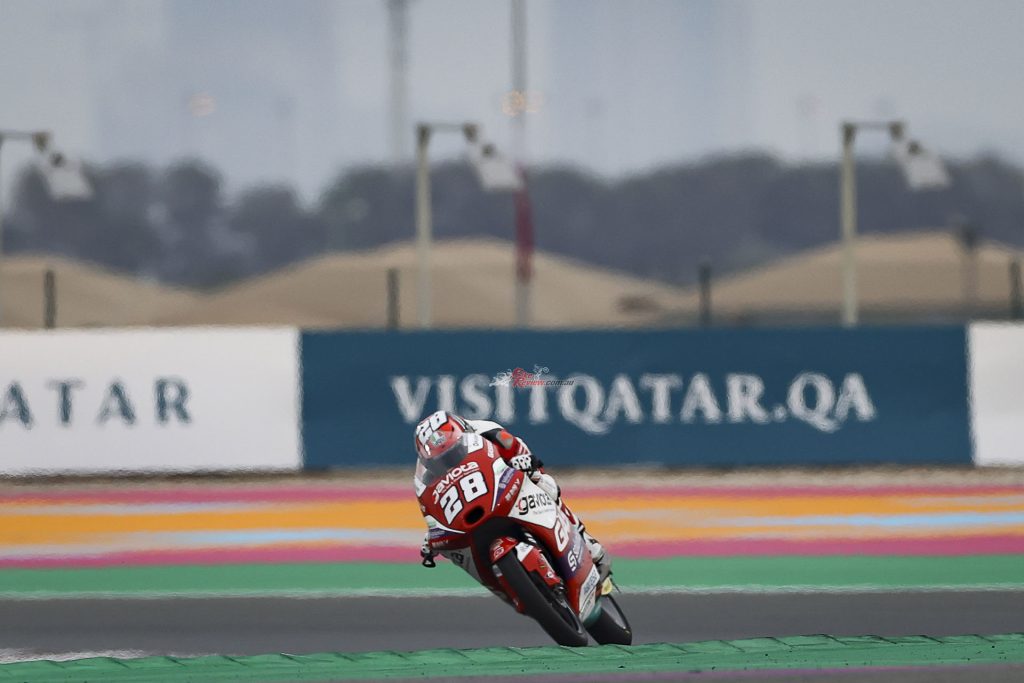 Izan Guevara (Gaviota GASGAS Aspar Team) claimed the first Friday Moto3™ honours of the season thanks to a late 2:04.920 in FP2

Moto3 Friday
Izan Guevara (Gaviota GASGAS Aspar Team) claimed the first Friday Moto3™ honours of the season thanks to a late 2:04.920 in FP2 at the Grand Prix of Qatar, pulling an impressive 0.4 seconds clear of the pack. That pack was led by John McPhee (Sterilgarda Max Racing Team), with FP1 pacesetter and 2021 runner up Dennis Foggia (Leopard Racing) ending Day 1 in P3 thanks to his morning best.

FP1
Foggia put in a commanding performance in the first session of the season, heading the timesheets by a whopping 0.9 seconds. Second was compatriot Andrea Migno (Rivacold Snipers Team), with Carlos Tatay (CFMoto Racing PrüstelGP) third quickest but 1.1 seconds off the top. Tatsuki Suzuki made it two Leopard Racing machines in the top five as the Japanese rider claimed P4, with P5 going the way of Riccardo Rossi (SIC58 Squadra Corse).

Track conditions were better than expected, and there were no crashers in FP1.

FP2
Most of the action came in the final five minutes of FP2, but ahead of the final flurry of fast laps, Guevera had to pull up at the end of the front straight with a broken chain. Luckily, the Aspar Team mechanics were able to sort the issue as the Spanish sophomore then went out to slam home the only 2:04 of the day. McPhee briefly sat top with his final fast lap before being deposed, with Suzuki third fastest in FP2. Ayumu Sasaki (Sterilgarda Husqvarna Max) suffered a technical problem.

Provisional Q2 places
Behind Guevara and McPhee from their FP2 bests, Foggia slots into third thanks to his FP1 stunner – and the Italian rode alone in the closing stages while others went in search of a tow. Suzuki ends the day in fourth, and Sergio Garcia (Gaviota GASGAS Aspar Team) completed the top five, 0.5s off Guevara.