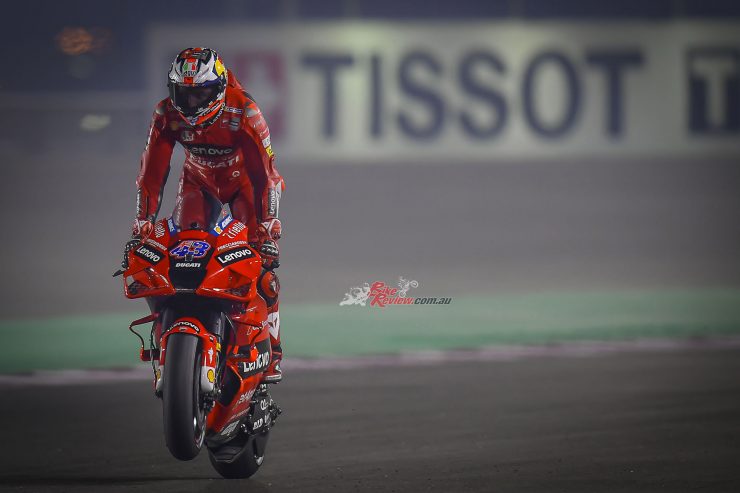 Day 1 of the TISSOT Grand Prix of Doha saw one marque very much lay down a marker, with four Ducatis ending the day in the top five. The fastest was Jack Miller (Ducati Lenovo Team) as the Aussie bounced back from a more difficult first race of the season to top the timesheets.

Miller put in a 1:53.145 to pull three tenths ahead of teammate Francesco Bagnaia in second. Third went to Qatar GP podium finisher Johann Zarco (Pramac Racing), with the Frenchman less than a tenth further back and top Independent Team rider. His rookie teammate Jorge Martin impressed in fifth to make it that four out of five for Ducati, with only Fabio Quartararo (Monster Energy Yamaha MotoGP) able to spoil the Borgo Panigale party as he took fourth. 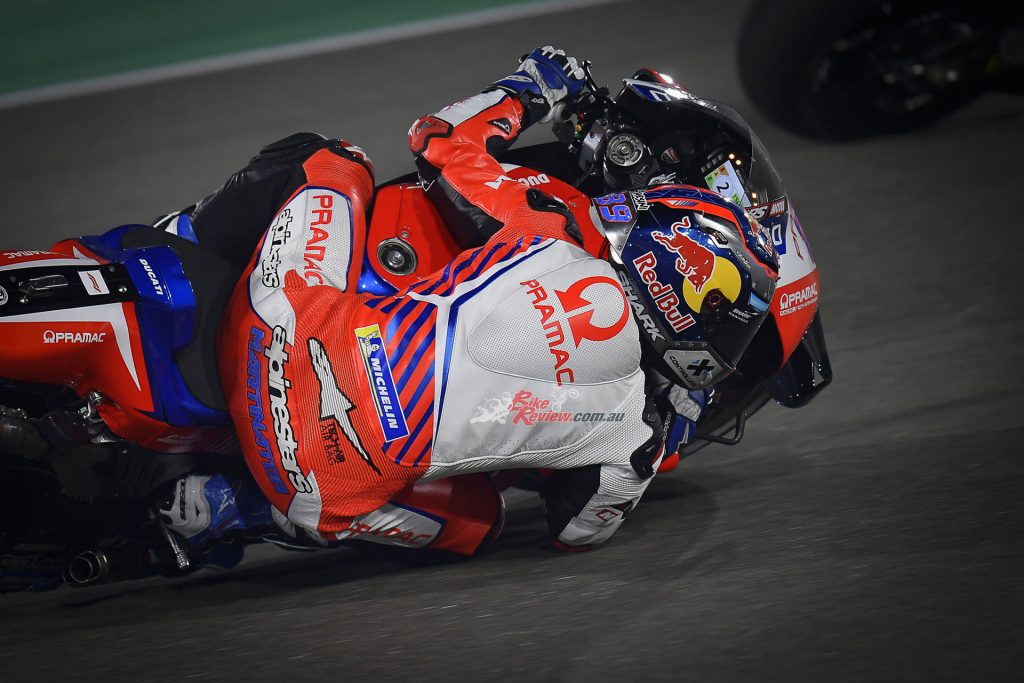 With conditions likely to make improvements difficult in the afternoon heat of FP3, gaining automatic entry to Q2 was the name of the game and that led to a classic last dash shootout at the end of FP2. First though, there was setup work to be done and after a couple of faster efforts from Bagnaia and Martin, most settled into working for the race. With just under 20 minutes to go, however, Takaaki Nakagami (LCR Honda Idemitsu) shot first as the Japanese rider started making moves on brand-new rubber, taking over in P2 and less than a tenth away from Bagnaia.

Martin, not looking like a rookie at all on the GP21, then moved back into P3 with 15 minutes to go and it was game on for time attacks. The Spanish rookie then put in another impressive lap and improved his time to go P1, but the Pramac rider’s time at the summit lasted about five seconds as Alex Rins (Team Suzuki Ecstar) then landed the first 1:53 of the day and we strapped in for a barnstorming final 13 or so minutes of action on Friday evening. 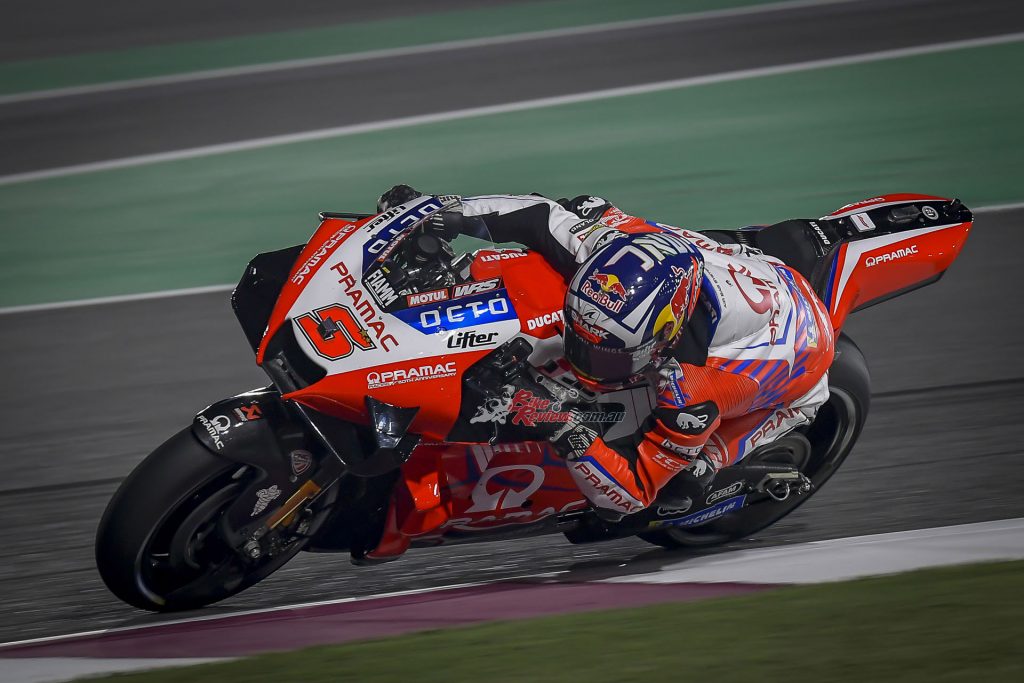 Quartararo soon demoted Rins to P2 before Aleix Espargaro (Aprilia Racing Team Gresini) moved the goalposts, a 1:53.646 putting the RS-GP rider nearly three tenths clear of the pack. Despite two mechanical issues in FP1, Franco Morbidelli (Petronas Yamaha SRT) next slotted himself into P2 before Miller, who was on a quick lap, stole the spotlight. Not for all the right reasons though, as the Australian was up with red sectors before having a huge moment out of Turn 14 that rattled him out the seat. He stayed on but headed into pitlane, down in P19 with only five minutes to go.

The turnaround was quick, however, and once back out Miller was firing on all cylinders. Half way around his flying lap, the number 43 was four tenths up and looking to lay down a serious benchmark, with the advantage only getting bigger in the latter half of the lap as Miller put himself 0.501s clear with a minute to go, luckily just avoiding the yellow flags waved for a Nakagami crash at Turn 7. 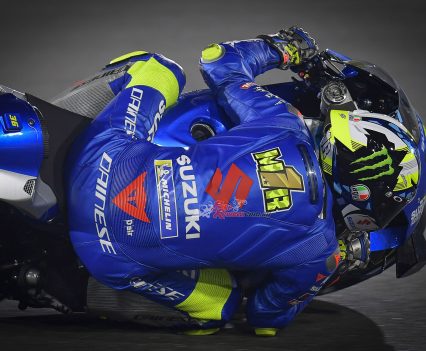 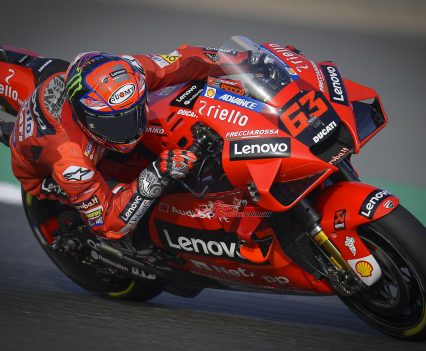 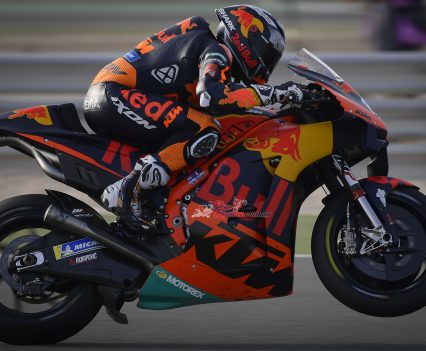 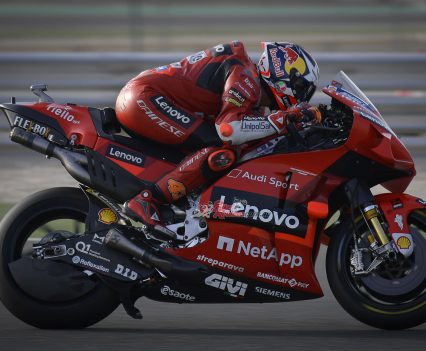 The final flying laps then saw plenty of movement, but none of it would be in front of Miller. Bagnaia, Zarco and Martin propelled themselves into the top five as the two Qatar podium finishers also avoided the yellow flags, this time for an Alex Marquez (LCR Honda Castrol) crash at the final corner. Further back on the road there was bad news for World Champion Joan Mir (Team Suzuki Ecstar) and nine-time World Champion Valentino Rossi (Petronas Yamaha SRT) too, with both needing to find time to break into the top 10… and both failing to find enough.

At the end of the shuffle then, it’s advantage Ducati with Miller, Bagnaia and Zarco, with Jorge Martin hanging on to an impressive fifth. Quartararo slips into P4 as top Yamaha, with FP1 pacesetter Aleix Espargaro taking sixth despite not heading out for a final time attack, that first flier enough. 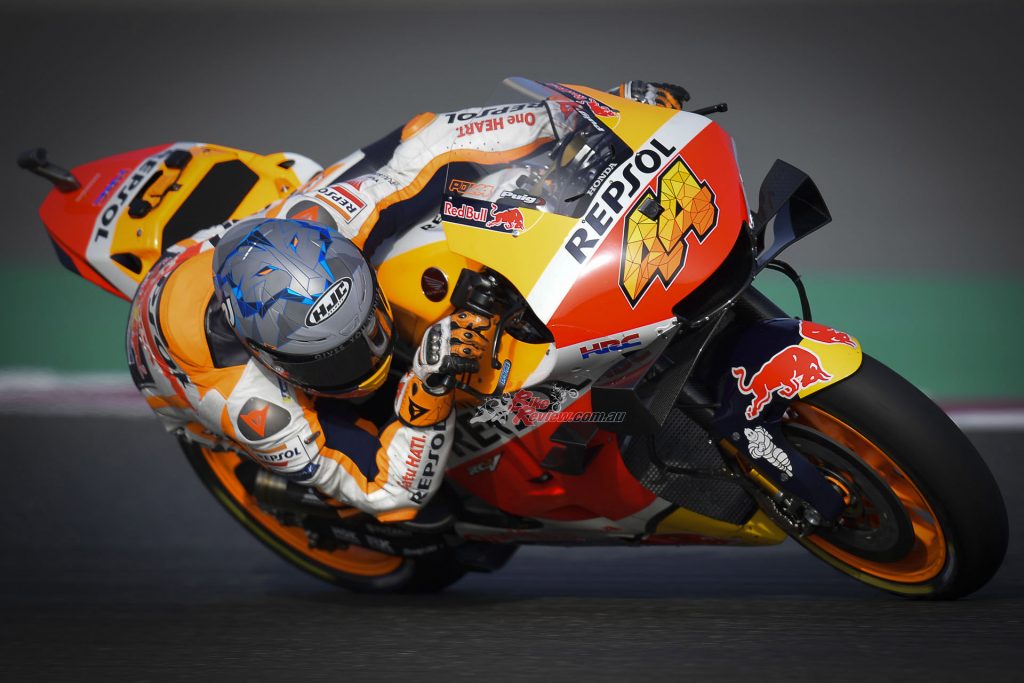 Morbidelli enjoyed a better evening to end up P7, and there were no issues for the Italian in FP2 as he got in some smoother sailing. Just 0.014 behind the Petronas Yamaha SRT rider is Rins, with the top eight covered by half a second.

World Championship leader Maverick Viñales (Monster Energy Yamaha MotoGP) only just squeezed into the top 10 in P9 with a late effort, with Marc Marquez’s replacement – and Honda test rider – Stefan Bradl (Repsol Honda Team) doing another fine job in P10 to break some hearts, not least those of Mir and Rossi. The reigning World Champion is P13, and Rossi exactly a tenth behind him in P14 as Miguel Oliveira (Red Bull KTM Factory Racing) and Danilo Petrucci (Tech3 KTM Factory Racing) slotted into 11th and 12th respectively. 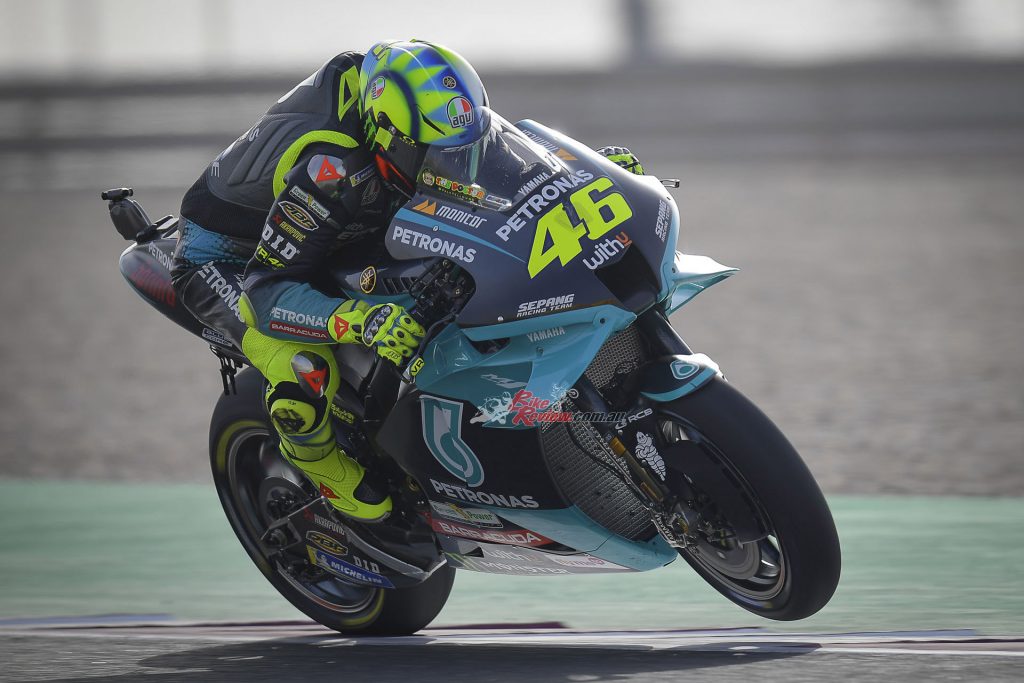 It didn’t take long for the times to immediately be quicker than a very warm FP1, and leading the way in the early stages were two rookies: Celestino Vietti (Sky Racing Team VR46) and Raul Fernandez. It didn’t last long though, as FP1 pacesetter Di Giannantonio stuck in a 1:59.058, with Joe Roberts (Italtrans Racing Team) and Marco Bezzecchi joining the Italian in the top three. 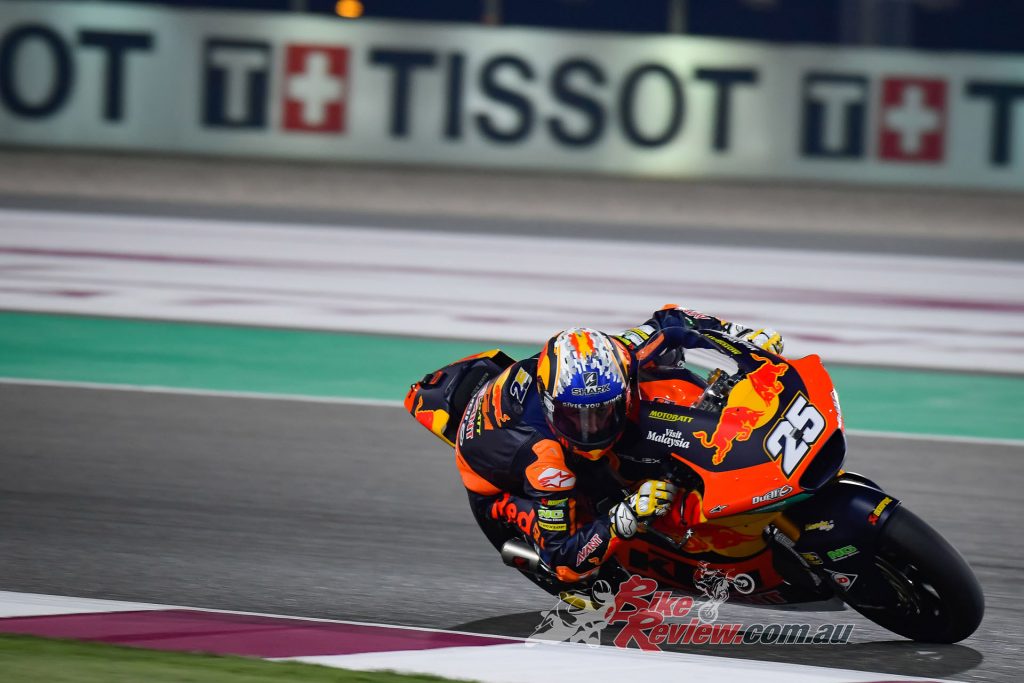 The session was then fairly quiet in terms of improvements, with plenty of riders figuring out race settings rather than searching for a quick lap time. The ever-impressive Raul Fernandez then went two tenths quicker than Sam Lowes’ (Elf Marc VDS Racing Team) pole time from last weekend with just under four minutes to go though, a lap that put him over half a second clear of the pack. Ai Ogura (Idemitsu Honda Team Asia) made it two rookies inside the top five too as there were a few movers down the bottom end of the top 14, but no one was troubling Raul Fernandez at the top.

The young Spaniard remained over half a second clear of Di Giannantonio to head into qualifying day as the rider to beat and by some distance, with Qatar GP podium finisher Diggia enjoying a good day at the office to take P2. Gardner beat fourth place Bezzecchi by just 0.020s, and then it’s only 0.005s back to fifth place Roberts as the timesheets got incredibly tight. Two more rookies impressed next up, with sixth-placed Ogura and eighth-placed Vietti sandwiching World Championship leader Lowes as the Qatar GP winner ended the day in seventh.

Marcel Schrötter (Liqui Moly Intact GP) and Nicolo Bulega (Federal Oil Gresini Moto2) – despite an early crash at Turn 6 – were able to comfortably grab places in the all-important top 14 as they complete the top ten, with those provisionally on for a place in Q2 concluded by Stefano Manzi (Flexbox HP 40), Aron Canet (Solunion Aspar Team), Augusto Fernandez (Elf Marc VDS Racing Team) and rookie Cameron Beaubier (American Racing), who recovered from a small tumble in FP1.

That means some big name riders may miss out on an automatic place in Q2, with conditions likely to be more difficult for a time attack in FP3. Petronas Sprinta Racing pair Xavi Vierge and Jake Dixon are two of those, with Somkiat Chantra (Idemitsu Honda Team Asia), Jorge Navarro (MB Conveyors Speed Up), Tom Lüthi (Pertamina Mandalika SAG Team) and his teammate Bo Bendsneyder also having tricky Friday evenings.

Moto3 Friday
With an automatic slot in Q2 on their minds, the Moto3™ field left it late to try and make one last dash count in FP2 at the TISSOT Grand Prix of Doha… but many didn’t even make it to the line in time. That left Darryn Binder (Petronas Sprinta Racing) on top of the pile, although the South African held onto it by 0.040 ahead of Sergio Garcia (GASGAS Gaviota Aspar Team) as the Spaniard just made it over the line to improve. Gabriel Rodrigo (Indonesian Racing Gresini Moto3) slots into third, another key name from the front group in the Qatar GP making his presence felt on Friday.

Pretty good conditions welcomed Moto3™ back on track at Losail International Circuit, and after a scorching FP1 it all came down to pushing for that laptime in FP2. Binder did just that to put in a time around seven tenths off his Qatar GP pole lap, with quiet then falling in the final few minutes as the field filed back into pitlane. Filing back out, however, is where the idea of a last dash came undone as many didn’t manage to cross the line in time to set that final fast lap. The result? A few key names out of position, including Dennis Foggia (Leopard Racing) set to miss the cut in P15 and Qatar GP frontrunner Ayumu Sasaki (Red Bull KTM Tech 3) in P27. 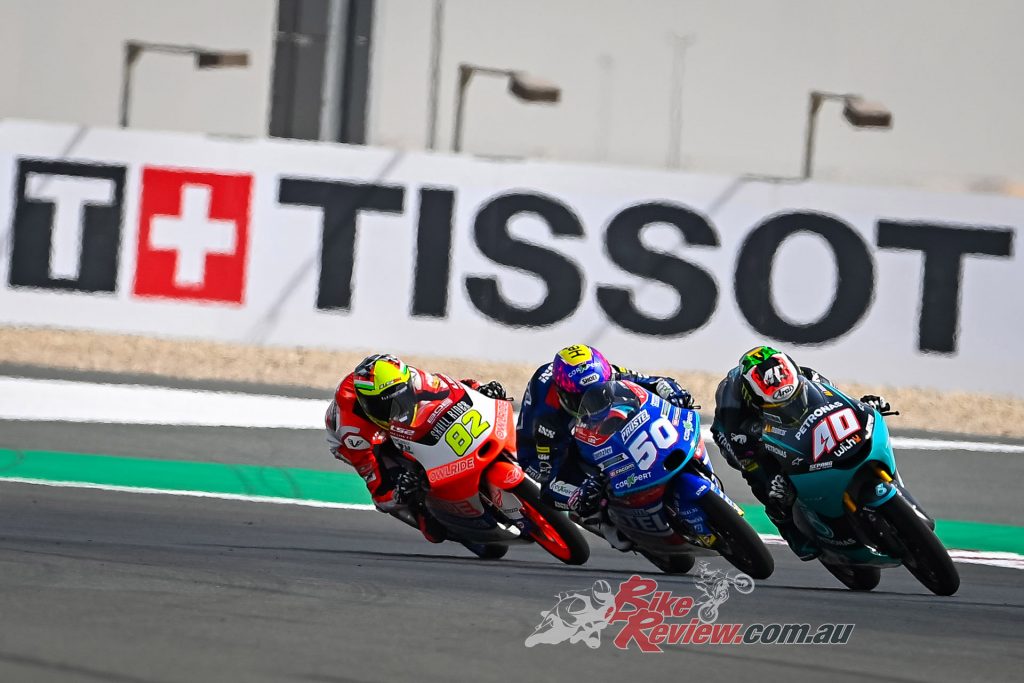 Behind Binder, Garcia and Rodrigo at the top though, John McPhee (Petronas Sprinta Racing) ends Friday in fourth as he got back up to the sharp end following bad luck in the Qatar GP, and fellow veteran Tatsuki Suzuki (SIC58 Squadra Corse) completes the top five. Qatar winner Jaume Masia (Red Bull KTM Ajo) slots into sixth overall ahead of rookie sensation Izan Guevara (GASGAS Gaviota Aspar Team), with 2020 Rookie of the Year Jeremy Alcoba (Indonesian Racing Gresini Moto3) in P8 as he moved up from ending FP1 very out of position in last place.