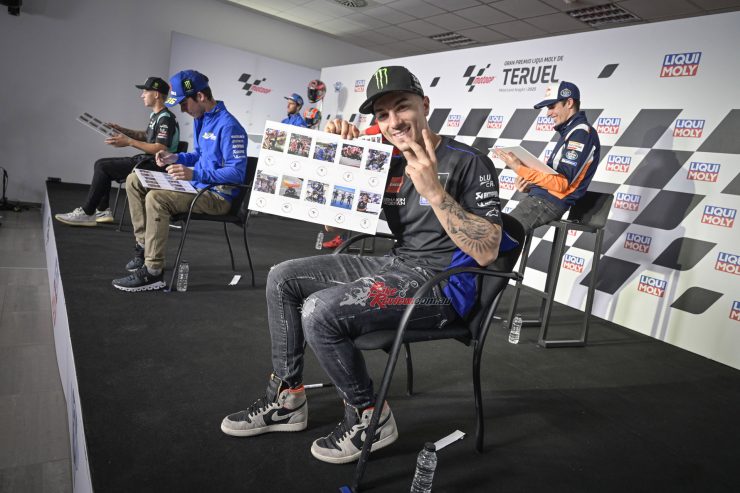 MotoGP: Riders ready to do battle for the second weekend at Motorland Aragon

It’s the third MotoGP race weekend in a row but now there are only four Grands Prix remaining in 2020, the pressure is starting to amp up – not that anyone says they feel it. Ahead of the Gran Premio Liqui Moly de Teruel, the pre-event Press Conference focused a lot on the title fight.. 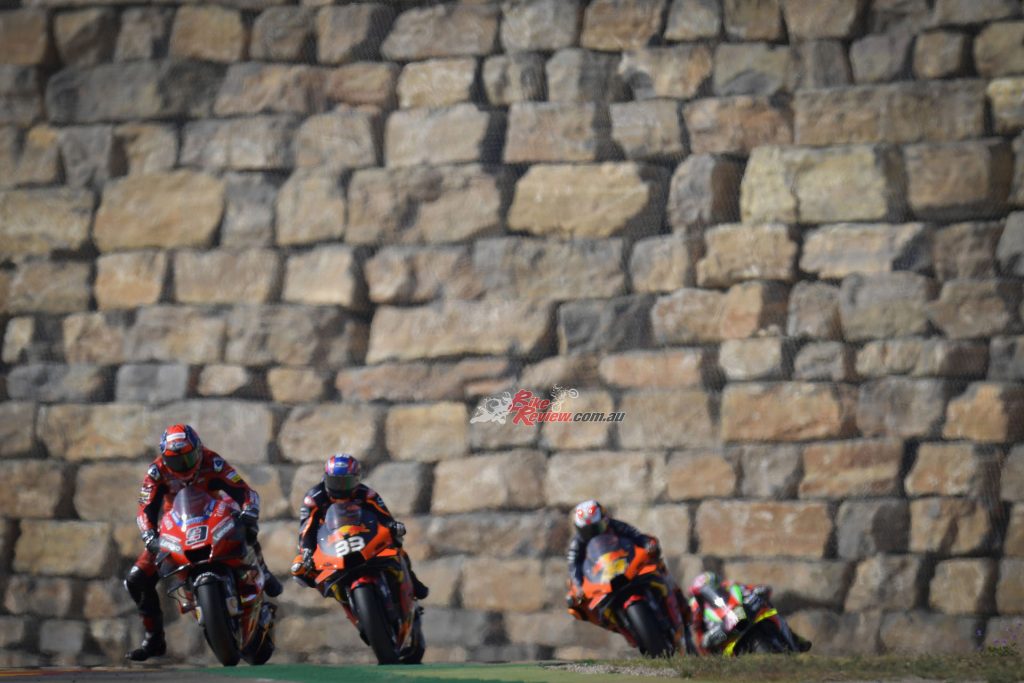 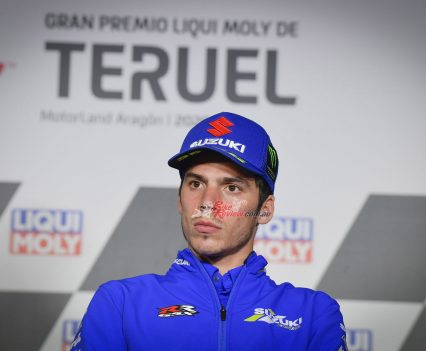 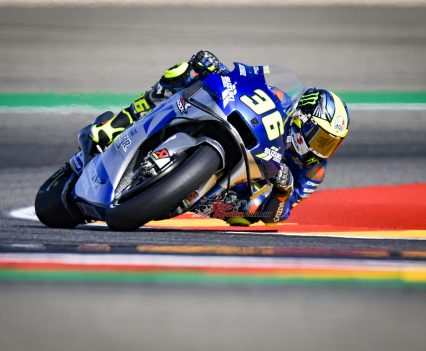 JOAN MIR: “l’m looking forward to this weekend, I think it can be good and positive. I feel great on this track, we had some problems at the end of the last race and it’s important to understand why. I think all of us will be faster because of more information, more laps on track, probably more rubber. So it will be interesting for sure.

Check out the action from last weekend here…

“The pressure is the same because six points behind or six points in front, four races remaining, it’s the same. Nothing changes. The important thing in MotoGP is to be in a good position and to show the potential every race. It would be a mistake changing the way I approach the race I have to continue going race by race, trying to get as many points as possible and then on Sunday we will see where we are. If we have the chance for the victory we will try and if not, we will stay on the podium or close.” 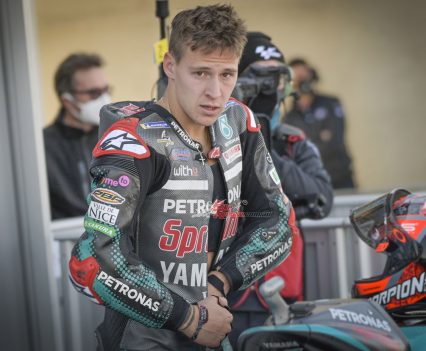 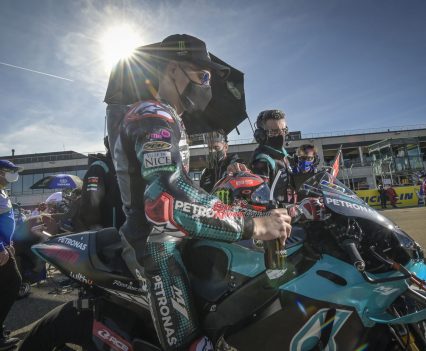 FABIO QUARTARARO: “Last weekend was a bit up and down for us. The crash, then a great pole position but then in the race I had a problem with the front tyre, a pressure problem, but our pace was not extremely good. It was enough to fight for top 5 but not really for the podium and victory, but it looks like we found something positive for this weekend and, for sure, I want to fight for a great result because I think we have something positive for tomorrow and for Saturday and Sunday.” 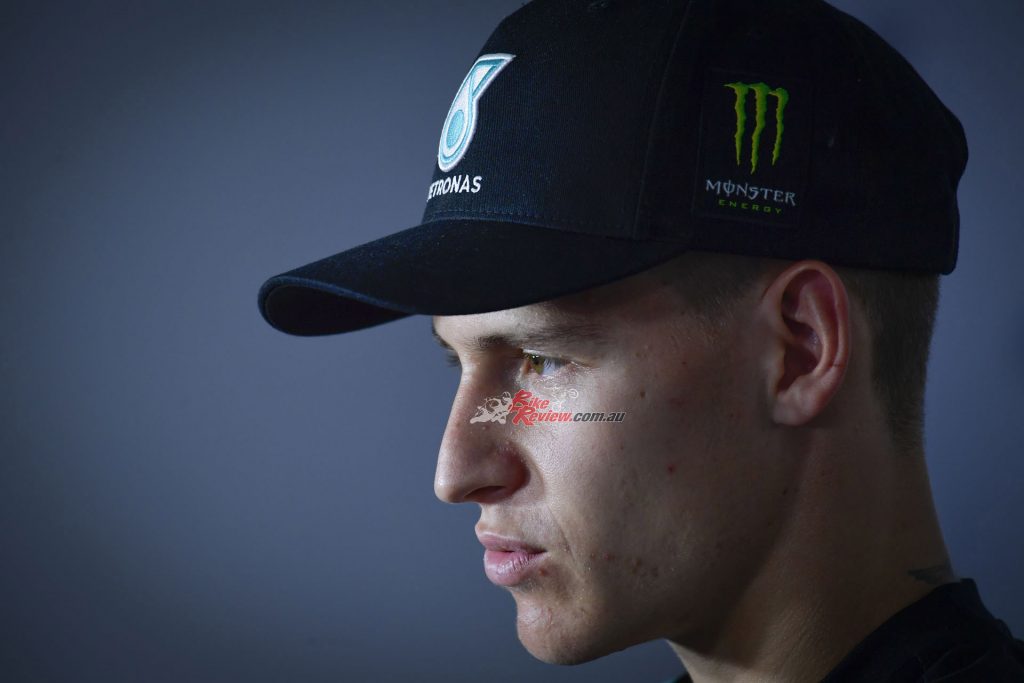 “For me the pressure is not so high because in the end there are so many races to go. Now I am behind in second, it just looks like that I have three guys around me who are factory riders and they need to fight also, so honestly the pressure is not really on me for the Championship so I’m feeling good and a little bit… released! I am feeling confident and we are in a great position right now.” 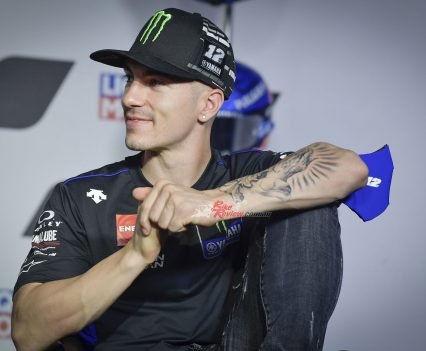 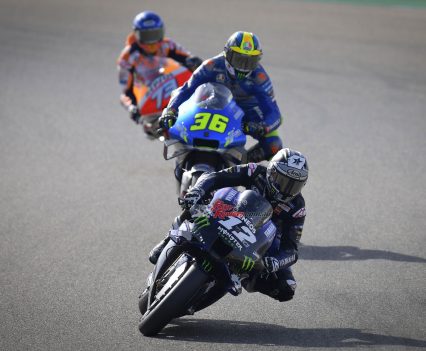 MAVERICK VIÑALES: “I will try to be more precise, to hit better lines. Especially adapt even more to the bike. We did a big step with the bike last weekend, but still I need to adapt a little more. Behind the competitors I saw many good things and many bad. So we need to concentrate to take the maximum from the good things. What I like was at the end I had something more, if this race we are fighting for the win we know we have something at the end of the race, which is good. But still I need to improve and be smoother with the MotoGP bike.

“Well I think for sure, because of many mechanical problems I lost at least 40 points in three races. They’re amazing points which we could achieve but in the end we need to face it like it is. We did good results in Misano, we got back to winning ways and we recovered a lot of points in Misano, which was positive. In the end our team is working good, but we need to understand why sometimes we don’t perform at the top. It seems we understand which is why we’re concentrating on the riding style, the bike is that bike; we can’t improve it right now and we need to take the maximum from what we have. 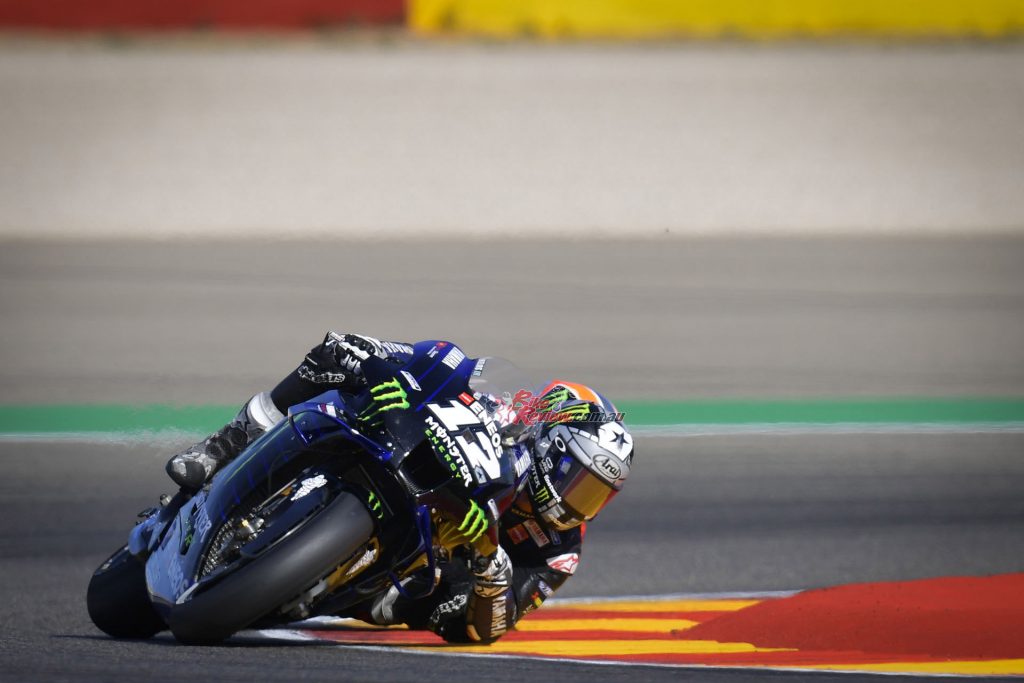 “These races I will be in the same mood, trying to ride, do good lap times, to do perfect lines and then we’ll see where we are in the race. For sure I’m confident that we can do a good job. Valencia is a track I like, Portimao I really like, when we rode there I was immediately fast straight away which is always positive. So for us the main key is to be consistent. If we can be consistent then I think we have a chance to fight for the title for sure.” 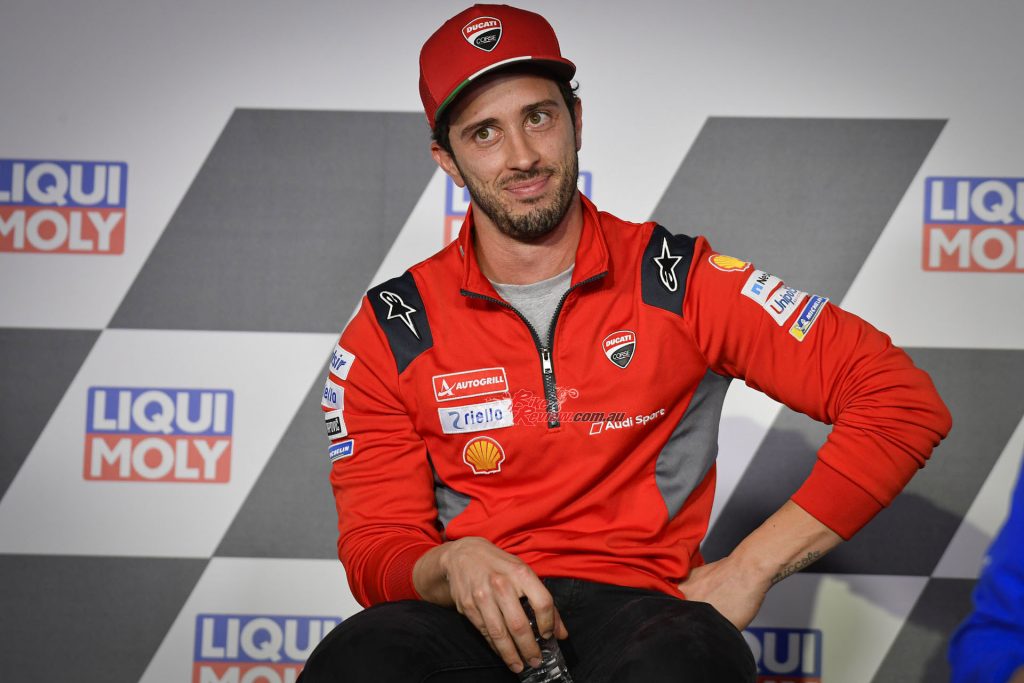 ANDREA DOVIZIOSO: “In the end we were struggling so much during the weekend, especially for the temperature but in the race the situation was a bit better. Not good enough to have the same pace as the fastest riders. But in the end, we are still there, and the Championship is still open. It is difficult and hard because they are really strong and fast on every track, but I hope and believe that if the conditions improve then we have the biggest margin for improvement. Everybody will be faster for sure so it will be a difficult weekend like every double race at the same track but in the end, we have to keep dreaming and keep working.

“In the end for me it has been a strange and different season compared to these riders. I have never been that strong to think about the Championship but in the end, I am there, and this is very important. Still I think we have our chance, but it is difficult like I said before. We won one race but in the other races the feeling wasn’t that good so it is difficult to fight for the Championship in that situation we are there so I think we will use our cards until the end.” 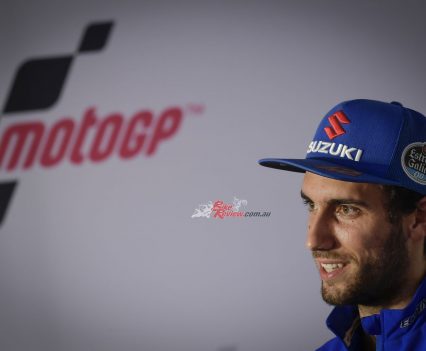 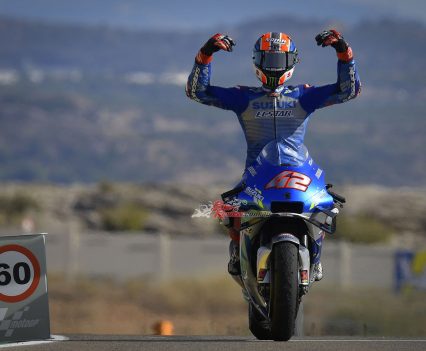 Rins – although not in the top four contenders as it stands – was asked whether he thinks he’s out the title fight and free of pressure… and it seems not.

ALEX RINS: “Nothing to lose? Maybe not! We’re 36 points, a bit far away but still we have options. There are still 100 points in the game so let’s try to recover the points. For sure this season is very up and down, I suffer a lot but this is the price to pay. We need to be there, to fight, for sure last weekend was a fantastic result to get the win in Aragon. But as the others say, this weekend will be even more difficult because everything will be closer. So let’s see where we can arrive.

“For sure it’s difficult to say I will be at 100% this season because to recover from a shoulder injury, it takes time. For me this track isn’t very aggressive, for example unlike Montmelo or Misano – I don’t struggle a lot with my right arm. For sure we lost two or three big opportunities but we were always there fighting. Always we had the opportunity. So let’s see what happens. The Suzuki is working quite good, you can see from Joan’s results and mine so let’s see!” 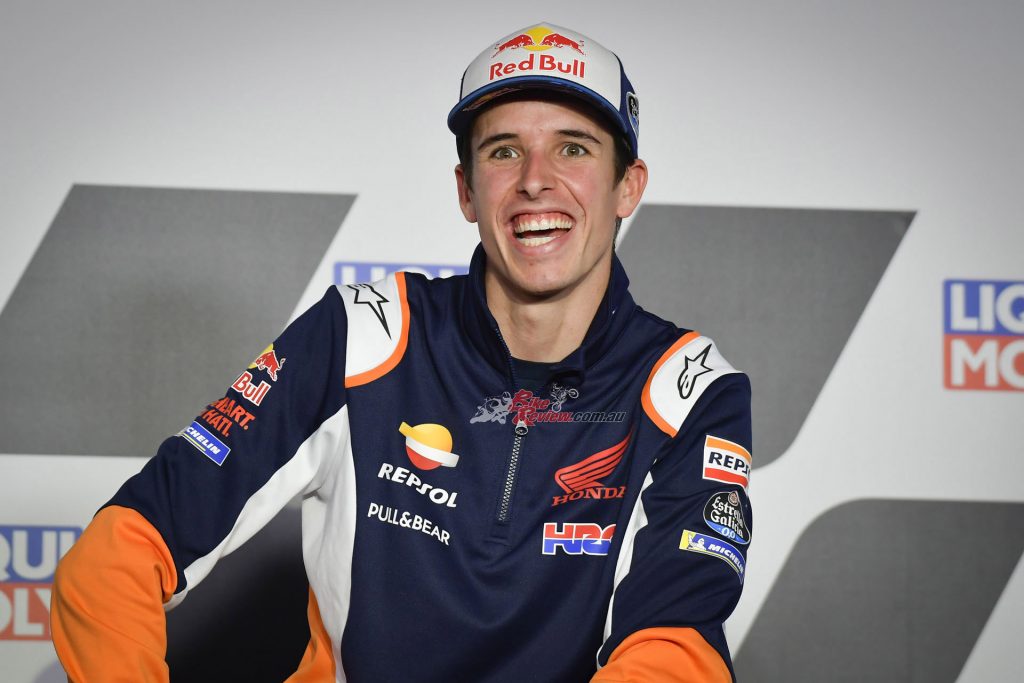 ALEX MARQUEZ: “Honestly my target this weekend is not to win the race, it is to repeat the work I did last weekend. In the end the race was a consequence from the practice where we did a really good job. We were making improvements every day, especially in the hot and in the cold, we were fast in all the conditions, so it was a consequence. I knew before the race that I had a good pace and I knew it would be difficult coming from P11, but yeah it will be an interesting weekend for us, we need to see how much we can improve in the second weekend. It is always interesting to see that. I think we have many points where we can improve. We need to focus on MotoGP qualifying, in the race it is the key. 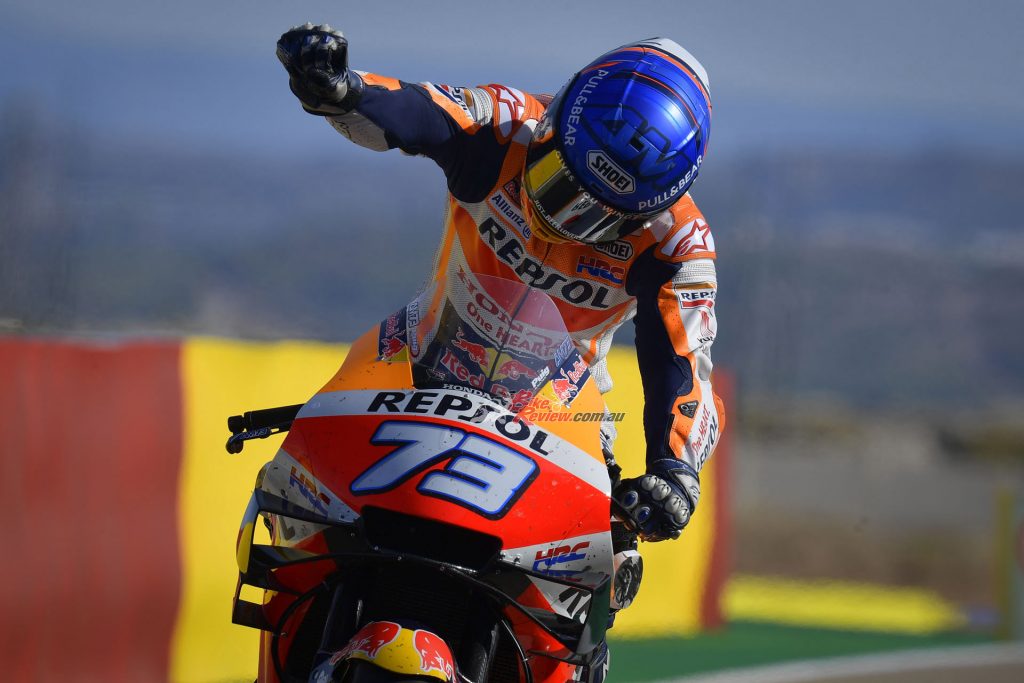 “For me the Misano MotoGP test was so important. We made a step forward from Qatar season test, I didn’t have the chance to have a test, and for a rookie it is difficult if you are not on the bike for three months during the lockdown and then you go to Jerez so always is a little bit difficult to try things during a race weekend. But in Misano MotoGP we started to try things and try set ups and also that day of test gave me lots of opportunities to take the confidence from the bike, to understand it a little better. It was a fantastic test for us. Since then we look like we are working in a better way, also Taka, from the first races he was so fast, he is in his third year and he made a really good step this year., he is still in the fight for the championship. I focus a lot on Taka’s style from the beginning because it was the best way to improve, so yeah, we are making steps; I think we still need improve.”