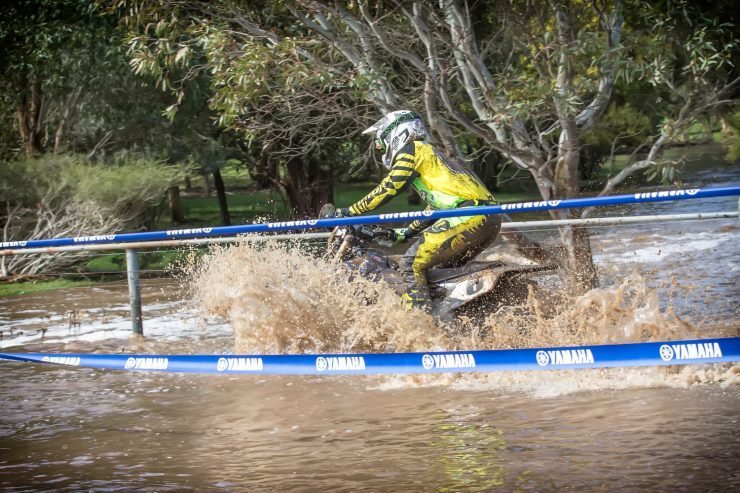 Beau Ralston wades his way through a water crossing at the final round of the AORC.

Active8 Yamahas Beau Ralston climbed to fifth outright in the final standings after the last two rounds of the Australian Off Road Championship were ran in wet and muddy conditions at Penshurst, Victoria, over the weekend.

In conditions that were more suited to a water vehicle, organisers re-routed the original Saturday Cross Country course that would have seen riders in waist deep water to slightly drier terrain and a far more sensible Sprint format with no river crossings and the weekend went ahead without incident.

Ralston, who entered the final weekend looking to make up points after not finishing a round earlier in the year, finished sixth outright, third in the E3 (over 450cc) class on Saturday in a good performance that edged him closer to that top five finish for the year he wanted.

With conditions improving and Ralston determined to make the top five for the year, he knuckled down and posted some great times during Sunday’s race and finished the round in fifth place to secure enough points to move him to fifth in the championship.

“We would have all loved a smooth, easy weekend of the final rounds of the championship but that wasn’t the case as the weather made it difficult for everybody,” Ralston explains. “The organisers and land owners did a great job to keep the weekend rolling and despite the mud, it wasn’t too bad, especially on Sunday. 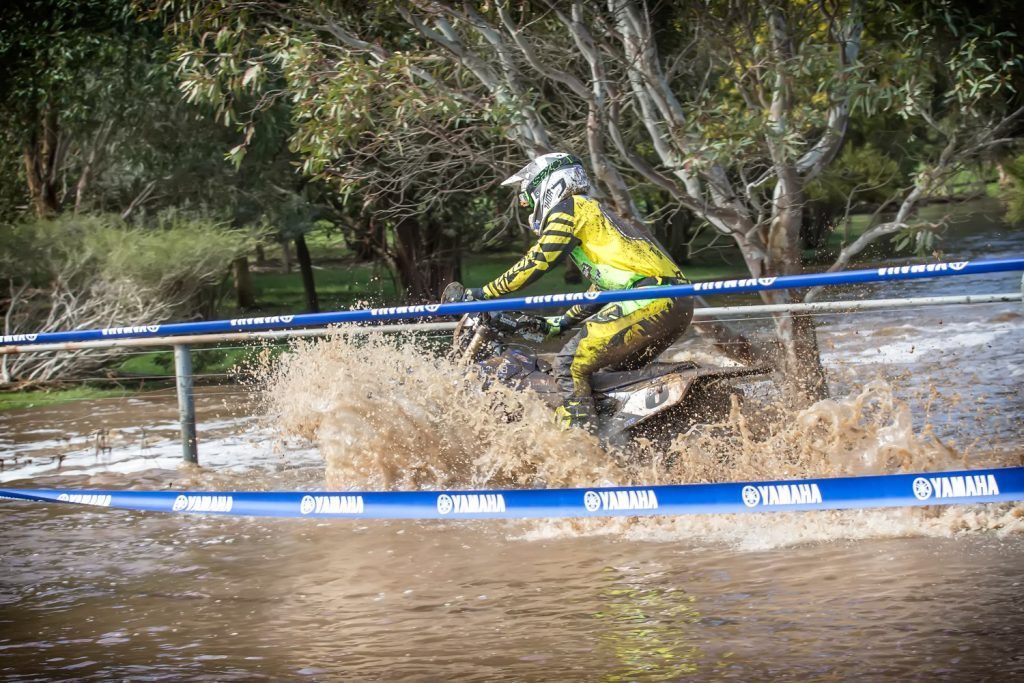 Beau Ralston wades his way through a water crossing at the final round of the AORC.

“Thank you to the Active8 Yamaha team for another great AORC championship and we now look forward to getting the job done in the A4DE in November,” Ralston ends.

Tayla Jones made her return to off road racing on the weekend after time off due to injury and was greeted by mud and water as far as the eye could see. Not ideal conditions for her return to racing after months on the sideline but Jones acquitted herself well and finished inside the top 10 on both days competed in the E1 (250cc) class against the men.

With lead rider Josh Green still on the mend from his knee surgery, Active8 Yamaha enlisted Yamaha privateer, Chris Davey, for the final rounds of the AORC. Unfortunately, Davey also hurt himself prior to this round but was able to get back on the bike and compete over the weekend.

Davey showed good speed but the lack of bike time showed and the energy sapping conditions took effect with Davey doing it tough on Sunday with little recent bike fitness under his belt.

“The 2016 AORC season has been a strange one for us,” states team manager, AJ Roberts. “We had a terrible run with injury this year with all three riders missing races throughout the season which means it is extremely difficult to get a good result when you don’t compete at all the rounds.

“But the riders have all worked hard and for Beau to finish fifth for the year was a good achievement. His continues to improve at off road and that’s important to us. Tayla jumped into the deep end to race the men this year and she proved how tough she is. It’s not easy but she has done a great job for us.

“All going well, we will get Josh back for the A4DE so we will be at full strength when the 4 Days starts in November,” Roberts signed off.

The Active8 Yamaha team will now have Beau Ralston and Tayla Jones represent Australia at the International Six Day Enduro (ISDE) in Spain starting on October 11, while the Josh Green is due back on the bike as he prepares for the A4DE.