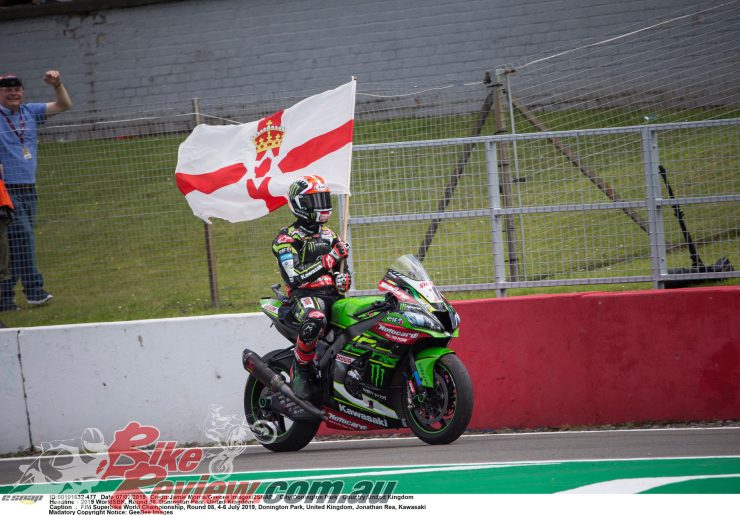 It has been a roller-coaster season in WorldSBK and there has been yet another twist in the tale of 2019 this past weekend at the British circuit of Donington, as Jonathan Rea takes the championship lead for the first time. A win in race one propelled the four-time WorldSBK champion to the head of the standings, as he capitalised fully on the crash of Alvaro Bautista (ARUBA.IT Racing – Ducati). Backed up with wins in the Tissot Superpole Race and in race two, Jonathan Rea sees himself back in the lead of the championship. 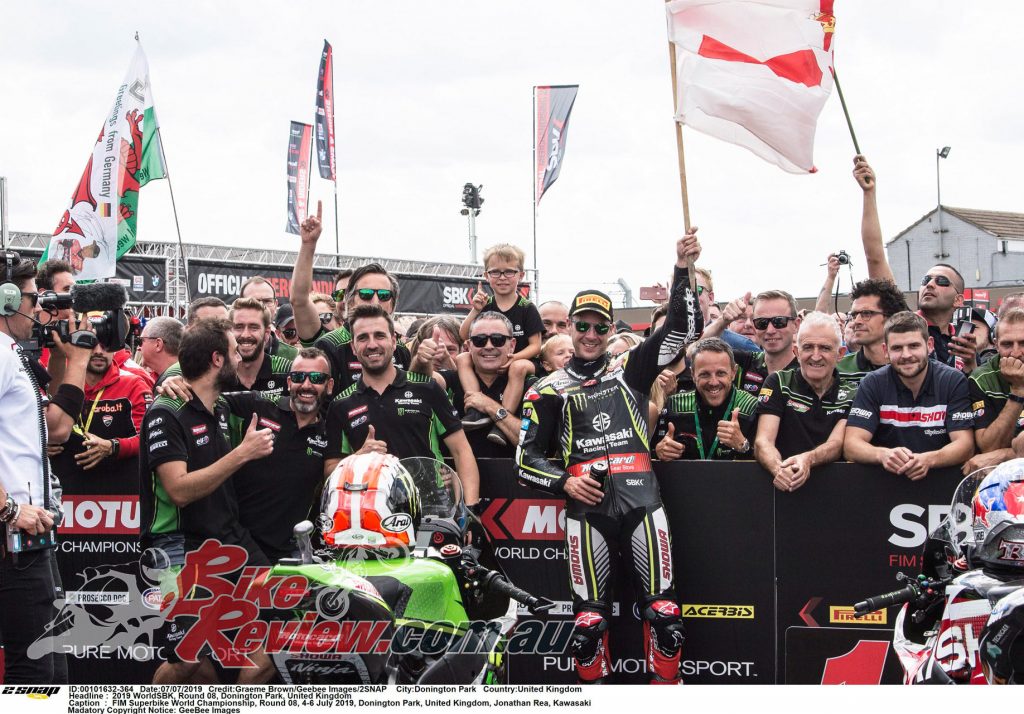 Speaking after the race, Rea described the feeling of being back at the head of the standings: “It is incredible! A similar story to Misano in race two with Toprak; he was so strong on the brakes. My team gave me a great bike, physically this weekend I felt really good and I was able to extract the best potential from the Kawasaki ZX-10RR.

“We worked step-by-step throughout the weekend, in FP1 I was a little bit unhappy with our set-up as we were quite far away – 0.9s from the fastest lap time but we arrive in the end with three race wins. To be back in the lead of the championship, I can’t quite believe it!”

Race 1
A wet race one proved to be dramatic in the 2019 MOTUL FIM Superbike World Championship, as Donington Park hosted yet another thrilling encounter. A frantic start saw Jonathan Rea (Kawasaki Racing Team WorldSBK) take the lead early on and never look back as he romped to a 76th career win to take the championship lead, as Alvaro Bautista (ARUBA.IT Racing – Ducati) crashed out in dramatic fashion.

It was a blistering opening lap from Jonathan Rea, who leapt of the line and took the lead at turn one, opening up a lead of over a second on the first lap. Pole-sitter Tom Sykes (BMW Motorrad WorldSBK Team) held second place, ahead of Leon Haslam (Kawasaki Racing Team WorldSBK), with the Ten Kate Racing – Yamaha of Loris Baz in fourth. Alvaro Bautista was fifth in the early stages but losing time to Alex Lowes (Pata Yamaha WorldSBK Team).

As the race settled, Rea was setting a scorching pace, lapping two seconds a lap quicker than anybody else, whilst behind him, Loris Baz got his way into the podium positions and ahead of Leon Haslam at the Melbourne Loop on lap two. One of the bigger losers off the start was Toprak Razgatlioglu (Turkish Puccetti Racing), who was down in ninth. It was a bright start for Argentine rider, Leandro Mercado (Orelac Racing VerdNatura), who was up to eighth from 14th, one place behind replacement rider, Peter Hickman (BMW Motorrad WorldSBK Team). 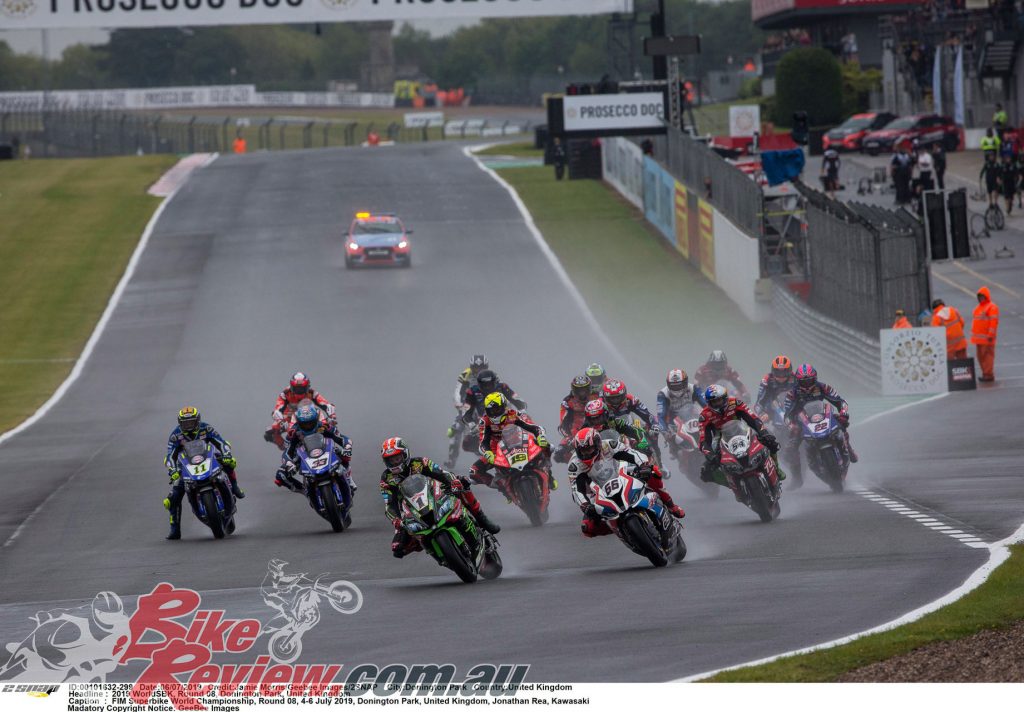 On lap four, Bautista began to respond to Lowes, as the Spaniard pulled clear and steadied the tide. Further down the order, Alessandro Delbianco (Mie Althea Racing Team) was showing his wet weather skills once again, as he was coming through the order. However, two laps later, it was a colossal moment for the Italian at Turn 2, with both legs off one side of his Honda, taking to the soaking wet grass at high-speed, yet somehow remaining upright.

Back at the front, Jonathan Rea continued to pull away from the rest, although Tom Sykes was beginning to match his former teammate’s lap times. After eight laps, Rea had a seven second lead, setting a supreme pace but needing to remain focussed, as the rain became heavier and more water was laying on the track. Whilst Sykes was second, Haslam was back in third and ahead of Loris Baz.

Then, a succession of accidents as Jordi Torres crashed on wet grass on the exit of turn six, whilst Sandro Cortese crashed at the same corner on the same lap, with the entry of the corner being the only difference. However, then there was huge drama, as Alvaro Bautista crashed out in spectacular style at the same point of the track, suffering his first back-to-back crashes of the season. The championship pendulum had now swung to Jonathan Rea, but with more than ten laps left, he still had to remain upright.

As riders ahead fell, other riders took advantage, with Leandro Mercado now elevated into sixth place, Hickman seventh and Michael van der Mark (Pata Yamaha WorldSBK Team) in eighth. Behind them, Alessandro Delbianco was on the move, up inside the top ten and wanting more, as he chased after those ahead of him.

Jonathan Rea took a third career victory at Donington Park, his 76th in total. Tom Sykes was back on the podium for a second round running and on a third manufacturer at Donington Park, whilst Leon Haslam was third at his home venue. Once again proving his worth in the wet weather, Loris Baz was fourth, ahead of Alex Lowes, who had a relatively quiet race.

A stunning ride for ‘Tati’ Mercado saw him take his joint-best result of his career and his best result of the 2019 season. Peter Hickman took a career-best seventh as a replacement rider, whilst behind him was Michael van der Mark, Alessandro Delbianco and Chaz Davies – the Italian getting the Welshman on the penultimate lap. It was a best result of the season for Ryuichi Kiyonari (Moriwaki Althea Honda. 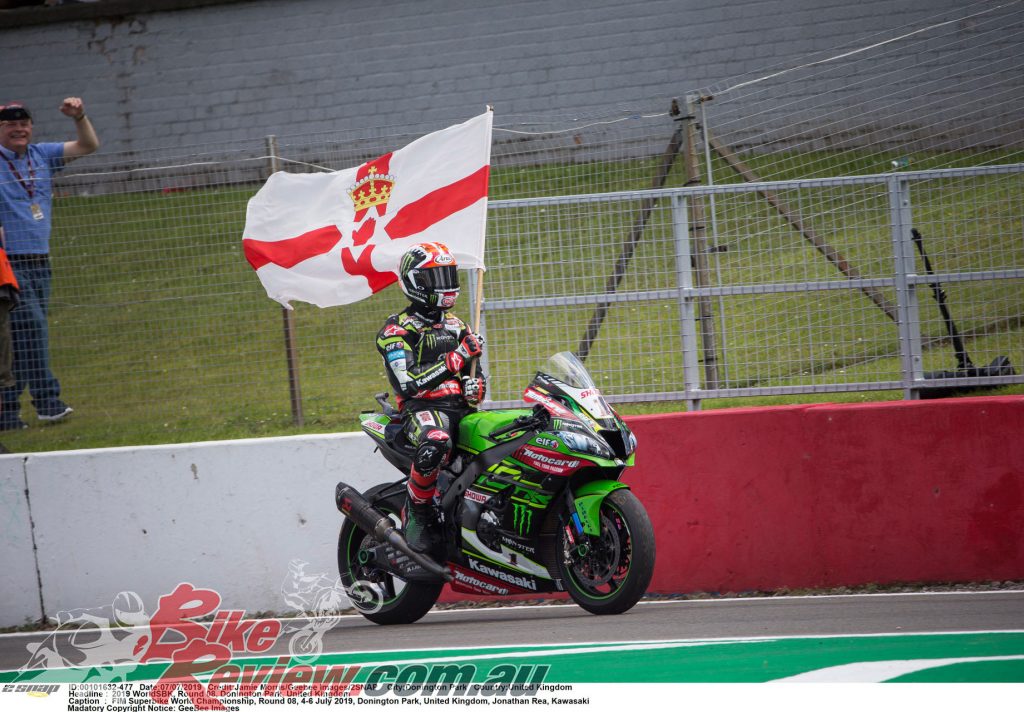 Tissot Superpole Race
It was a scorching encounter in the Tissot Superpole Race, as a four-man scrap at the front of the field. Under glorious blue skies, it was frantic and feisty from lap one to the chequered flag, with Jonathan Rea (Kawasaki Racing Team WorldSBK) taking another vital win to extend his championship lead.

Taking the lead into turn one, Tom Sykes (BMW Motorrad WorldSBK Team) had the advantage ahead of new championship leader Jonathan Rea, whilst Leon Haslam (Kawasaki Racing Team WorldSBK) was third and Toprak Razgatlioglu (Turkish Puccetti Racing) was fourth; it was a rapid start from the Turkish rider, coming through from row three. Alvaro Bautista (ARUBA.IT Racing – Ducati) was fifth, but not making huge in-roads on the opening lap.

Razgatlioglu got ahead of Haslam at the Melbourne Loop on the second lap, and soon, it was an all-out brawl between the leading four riders, as Jonathan Rea tried to get ahead of Sykes at the Foggy Esses but didn’t make it stick, with Sykes fighting back. The battling allowed Alvaro Bautista to begin to close on the leading group, as he was in fifth. 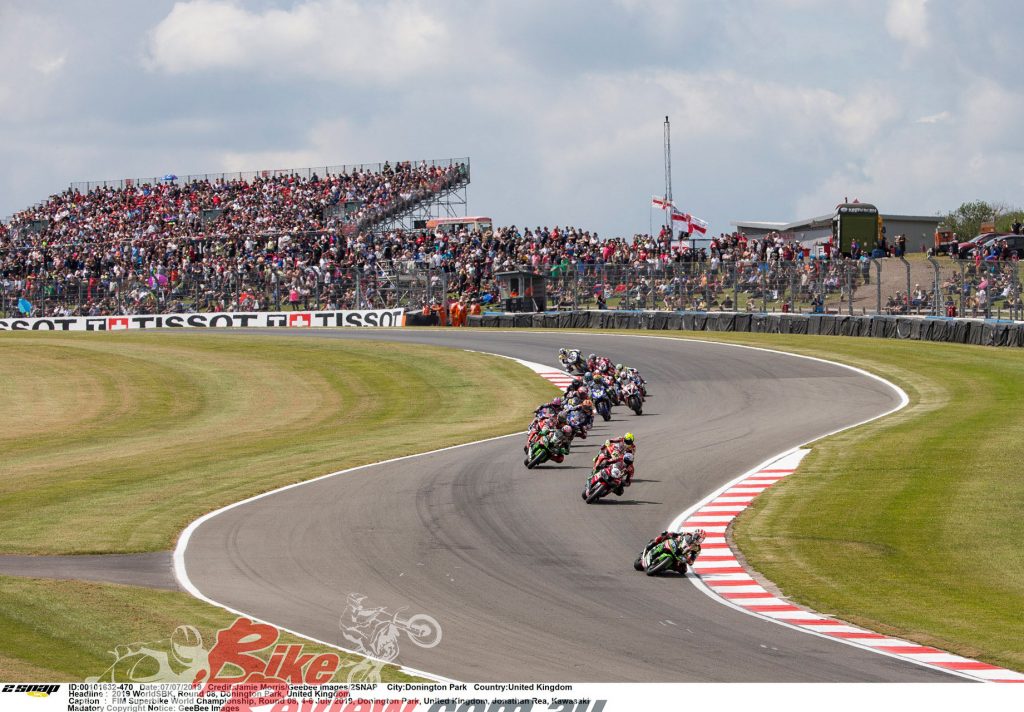 On lap four, Rea took the lead at the Foggy Esses, barging his way ahead of the 2013 WorldSBK champion, although the Huddersfield-ace tried fighting back, excelling in the opening two sectors. However, on lap six, it was drama and a red flag was brought out after Peter Hickman (BMW Motorrad WorldSBK Team) suffered a blown engine, dropping fluid on the circuit at the Melbourne Loop. Unfortunately, Leandro Mercado (Orelac Racing VerdNatura), Alessandro Delbianco (Althea Mie Racing Team), Sandro Cortese (GRT Yamaha WorldSBK) and Ryuichi Kiyonari (Moriwaki Althea Honda Team).

However, after the red flag went down, although being classified as second, Tom Sykes crashed on the oil on the approach and, due to not getting back to the pits with his bike within five minutes, was classed as a retirement. 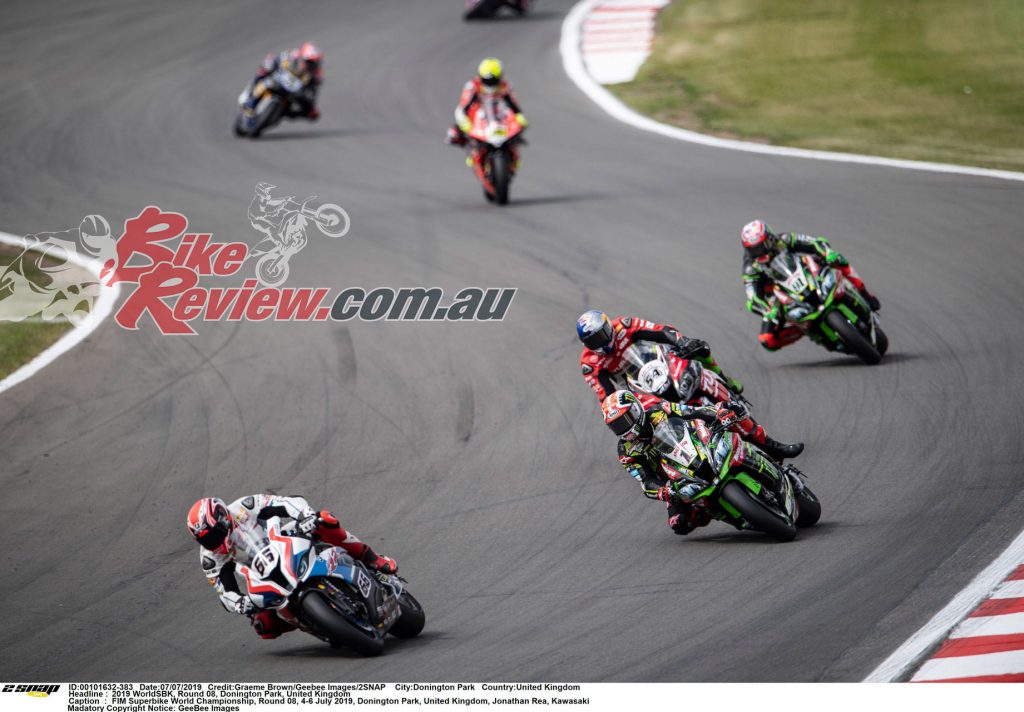 Race 2
In the final action of the weekend for the MOTUL FIM Superbike World Championship, it  was action right from the start, with Jonathan Rea (Kawasaki Racing Team WorldSBK) coming out on top after another tough scrap with Toprak Razgatlioglu (Turkish Puccetti Racing).

Heading towards turn one for the first time, Jonathan Rea rocketed from pole position to grab the hole-shot, ahead of Toprak Razgatlioglu (Turkish Puccetti Racing), whilst Alvaro Bautista (ARUBA.IT Racing – Ducati) blasted into third. At the Old Hairpin however, Bautista was passed by home-hero Leon Haslam (Kawasaki Racing Team WorldSBK). Chaz Davies had a strong opening, running as high as fifth, right behind his teammate. It was a nightmare for Jordi Torres (Team Pedercini Racing) one lap later, as the Spaniard retired.

With the race settling down, on lap three, Razgatlioglu took the lead at the circuit where he took his first WorldSBK career podium. With a strong out-braking manoeuvre at the Melbourne Loop, he was able to pinch the advantage. However, two laps later, Rea took the lead back and one lap further on, Haslam momentarily got ahead of the Turk at the Foggy Esses.  At the Melbourne Loop, Razgatlioglu recovered and the 22-year-old was back in second. 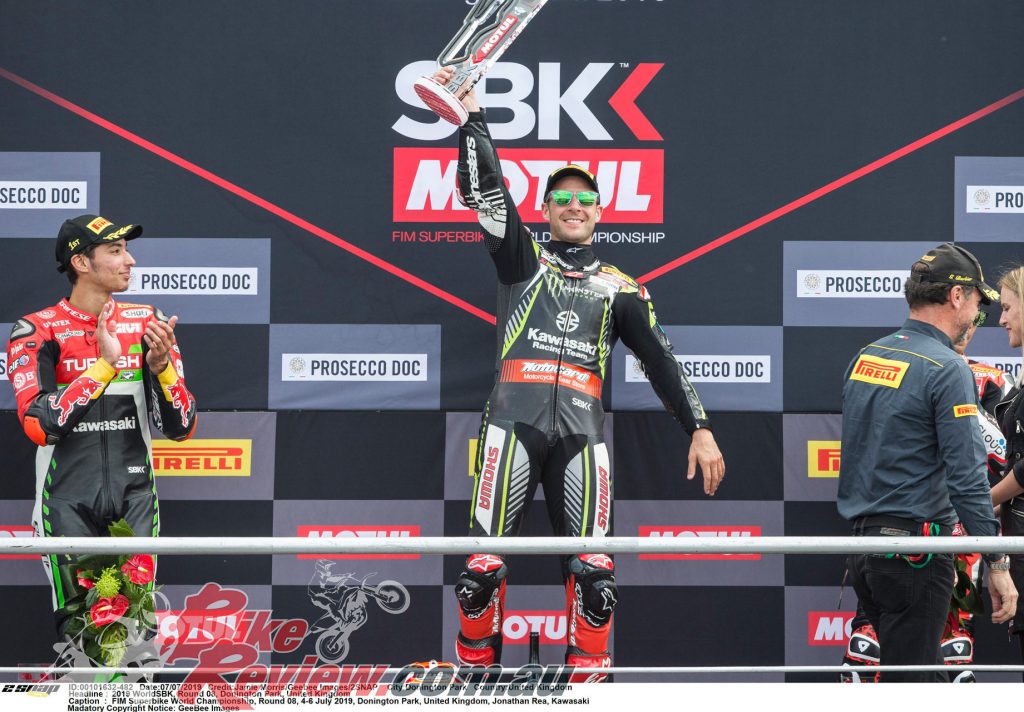 Razgatlioglu was able to retake the lead from Rea, with the two riders dancing side-by-side around the Donington Park circuit. Another late-braking move at the Melbourne Loop saw him retake the lead and then, put the hammer down. Razgatlioglu and Rea broke clear of the fading Haslam in third place, whilst Alvaro Bautista was all over the rear-end of the five-time WorldSBK race winner.

With 12 to go, it was a rare error at the Foggy Esses from Toprak, allowing Rea to cut through and take the lead back from the young Turk. A lap later, and the battle for third started to ignite with Bautista taking the final podium position from Leon Haslam. With all the swapping, slowly but surely, Loris Baz (Ten Kate Racing – Yamaha) was now closing down Leon Haslam, with Alex Lowes (Pata Yamaha WorldSBK Team) in sixth. Tom Sykes (BMW Motorrad WorldSBK Team) was seventh from tenth on the grid, whilst Davies had slipped to eighth.

There was a change in the battle for fifth place, as Alex Lowes forced Baz wide at the Foggy Esses, with the British rider getting ahead into the Melbourne Loop. Even further back, double winner from Donington Park in 2018, Michael van der Mark (Pata Yamaha WorldSBK Team), got ahead of Davies for eighth place. 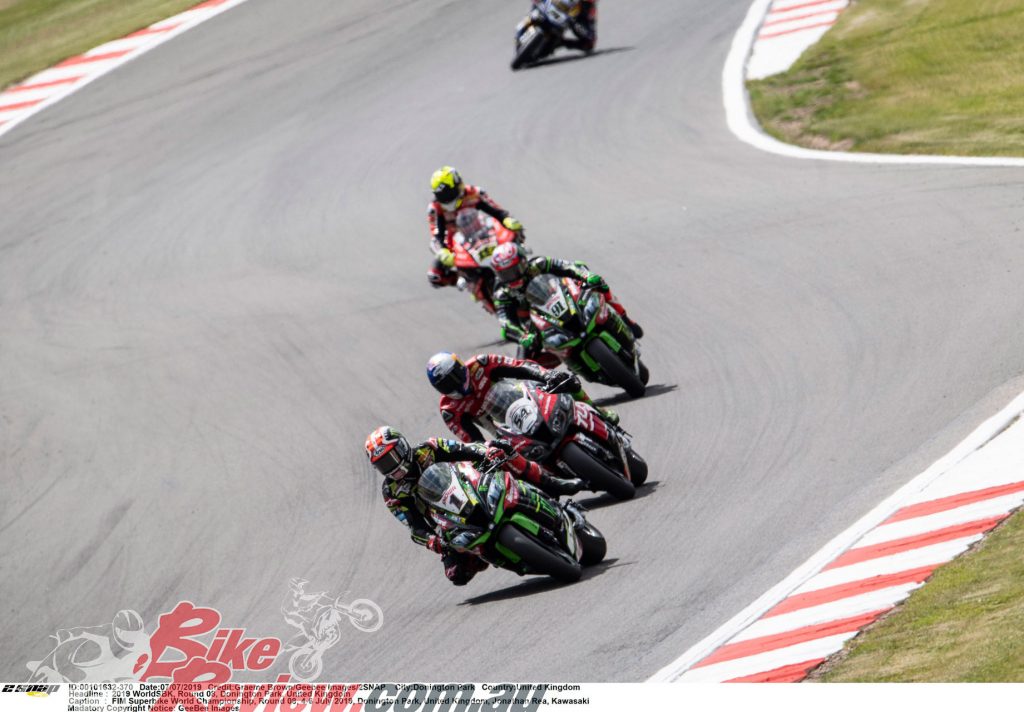 In the closing stages, there were two battles: for first and second between Rea and Razgatlioglu, and for third place between Bautista, Lowes, Haslam and Baz – with Lowes getting ahead of Haslam with just three laps to go. Going into the final lap, half-a-second split the leading two, whilst Bautista had a small buffer for a safe third place.

Coming to the line for the final time, Jonathan Rea completed a Donington Park hat-trick at home, the first triple he has achieved this season. Razgatlioglu took another podium with second and Alvaro Bautista took his first podium of the weekend, although he now trails the reigning WorldSBK champion by 24 points. Alex Lowes was fourth whilst Leon Haslam completed the top five, only just ahead Loris Baz.

Top 5 championship points at the end of round eight: