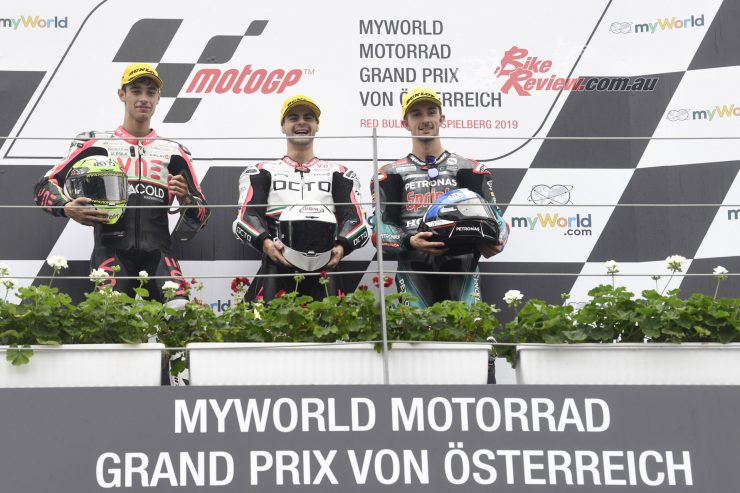 Romano Fenati’s (VNE Snipers) 2019 reboot is complete after the myWorld Motorrad Grand Prix von Österreich, with the Italian veteran producing a sensational ride to claim his first win since the 2017 Japanese Grand Prix. The number 55 was pitch perfect to finish just over a second clear of teammate Tony Arbolino for a VNE Snipers 1-2, with John McPhee (Petronas Sprinta Racing) locking out the final place on the podium. 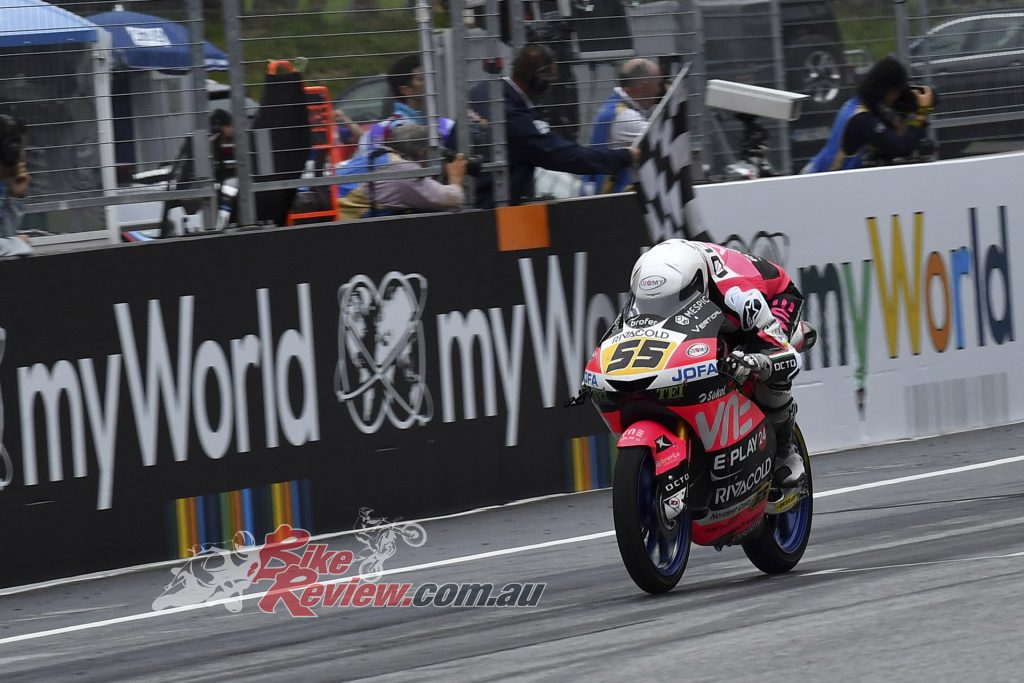 Despite plenty of rainfall in the morning, the track had mostly dried for the Moto3™ race as every rider went for slicks. There remained plenty of wet patches on the grid, however, and off the line it was Fenati who got the better of polesitter McPhee, with Arbolino slotting into second at Turn 1 to make it a VNE Snipers 1-2 on the run down to Turn 3. At said corner, Arbolino immediately pounced to take over in the lead and the trio of Arbolino, Fenati and McPhee started to pull the pin and create a gap to the chasing pack.

On Lap 2 the front three were well clear of fourth place Lorenzo Dalla Porta (Leopard Racing), with the gap up to 2.7 seconds despite Fenati and Arbolino exchanging the lead of the race as McPhee looked on. On Lap 7, Arbolino told Fenati to stick behind him, but the number 55 was soon back through and with the gap to the chasers up to over four seconds, it seemed set to remain a three-way fight for the win.

The lead had changed again but on Lap 9 Fenati took over again, then setting a 1:38.4 to stretch his lead to over half a second. It seemed the veteran was in the groove in the tricky conditions, and Arbolino and McPhee were also starting to come under pressure from those behind as Celestino Vietti (Sky Racing Team VR46) and Jaume Masia (Bester Capital Dubai) started to close in. 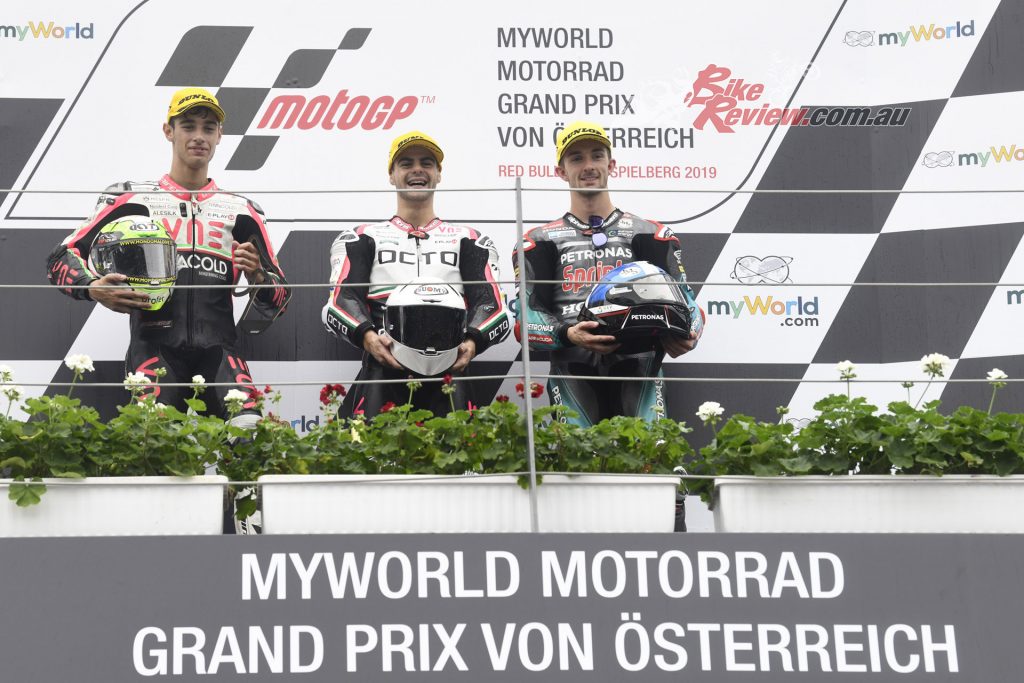 By then, Fenati was setting fastest lap after fastest lap and his lead was creeping up to the two-second mark. Vietti and Masia were also on fastest lap pace as the duo started to eat into the 3.3-second advantage McPhee and Arbolino had, with the latter two getting closed down half a second a lap.

With four to go, it was game on for the podium battle. A lap later Vietti set the fastest lap and Masia stuck with him, with Fenati still over 1.5 seconds up the road. Masia then made a move stick on Vietti at Turn 3 as the Spaniard eyed a first podium since Mugello but after attempting a move up the inside of McPhee on the penultimate lap, the number 5 went down. And then there were three.

Fenati crossed the line with just over a second of breathing space for his first win since 2017 and Italy’s 250th win in the lightweight class, keeping incredible composure throughout despite the tough conditions – and a lot of pressure. Behind him, it was Arbolino from Vietti from McPhee on the last lap, with the trio line astern into the final corner and everything coming down to the drag to the line, but Arbolino was just able to keep second by a handful of thousandths. He took second, with McPhee able to pip Vietti to P3 by just by 0.015.

Romano Fenati: “It feels like a Championship win! It’s nice to come back and win after two years, and in Austria where I’ve never been on the podium. For us it was a perfect weekend. This weekend we changed the job in the box, it was really perfect this weekend and I think it’ll be difficult to repeat but we have to stay focused.

“For sure it’s  been difficult, but it’s our story. We always have to go on, we write our own lives. Now, here we are, I won and I’m happy…tomorrow, I don’t know. We’ll see!”