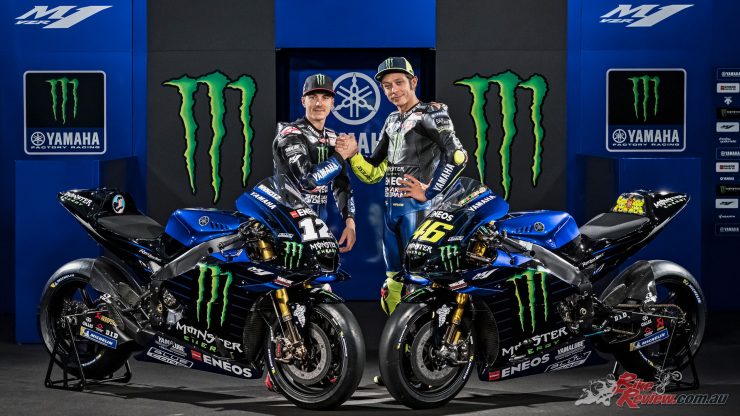 The Monster Energy Yamaha MotoGP Team unveiled their 2019 colour scheme in Jakarta, Indonesia to great excitement, with the launch event‘s theme “Beast Mode On” echoing the new title sponsorship deal between Yamaha and Monster Energy, as well as the team’s mindset ahead of the official 2019 IRTA MotoGP preseason test in Sepang, Malaysia. 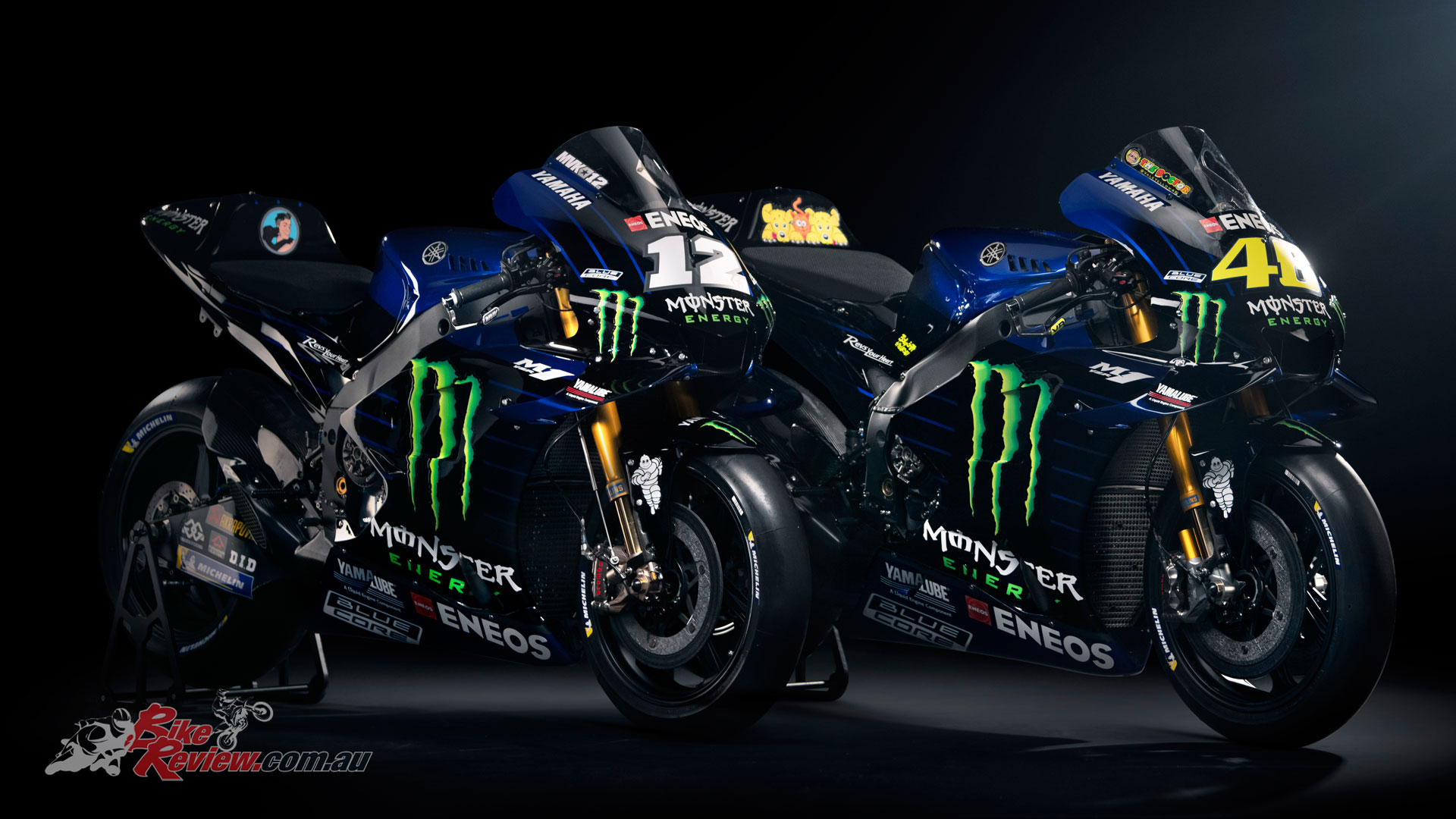 Valentino Rossi and Maverick Viñales also joined the talk show, and made it clear that they can’t wait to get back into action at the official 2019 IRTA MotoGP preseason test held in Sepang, Malaysia, in two days‘ time.

Valentino is famously Yamaha’s most successful rider. This will be his 14th season with the manufacturer since he first joined the factory team in 2004, and there is no sign of him slowing down. The nine-time World Champion is as eager as ever to score GP victories, as he enters a seventh consecutive year with Yamaha since his return in 2013. 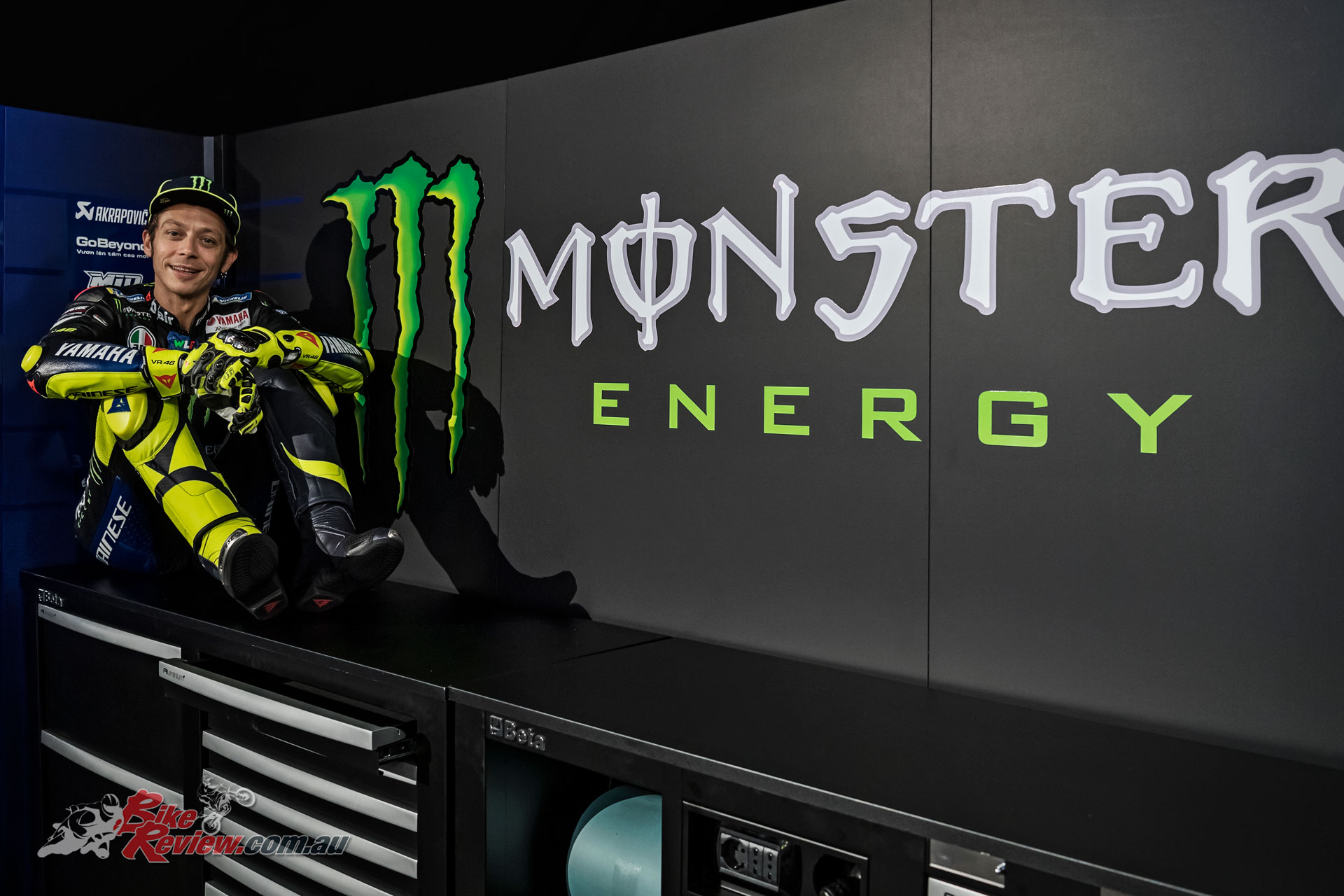 Valentinto Rossi saying, “The team presentation is always an event that I enjoy. It is the first time that we can show off our full package for the new season and, most importantly, this event signals that the start of the preseason is close! I‘ve taken a bit of time to relax and train these last couple of months, but, like the fans, I‘ve mostly been looking forward to starting the new season. The upcoming test in Sepang is very important, because it‘s the first opportunity for the team to get together to try everything Yamaha has been working on over the winter. Our performance improved towards the end of last season, but we want and need to make some more big steps, so we need to get to work. I‘m happy that Monster Energy is joining our team in a new role this year. They have been Yamaha‘s and my sponsor for a long time, so we know each other well and we share the same passion for racing, which is important. I‘m sincerely looking forward to the new season and to riding again, I want to get back aboard my M1! I feel as good and determined as ever, nothing changed in that area, and I believe that, with some hard work, we can improve upon last year and be back on top.” 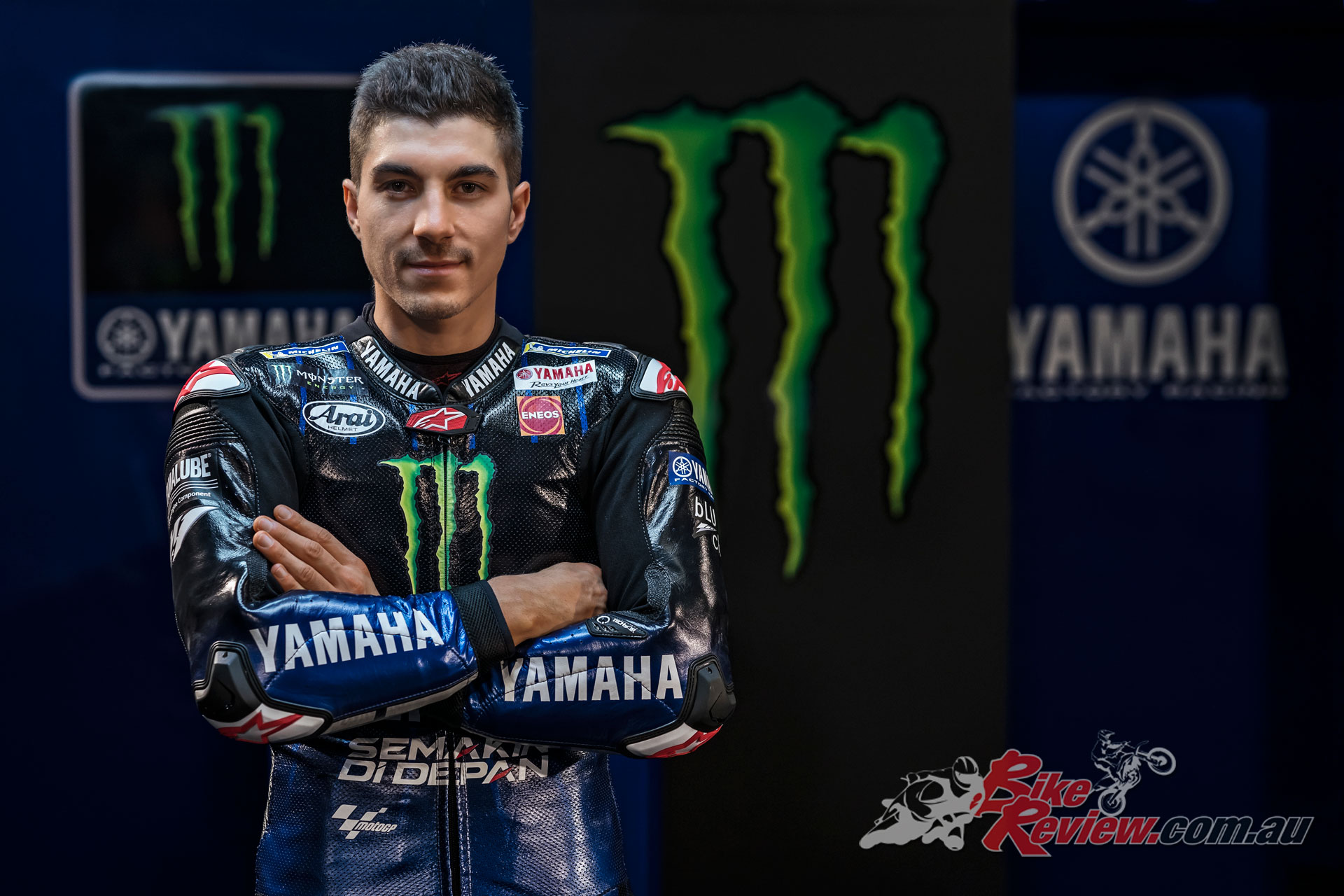 Maverick joined the Factory Yamaha crew in 2017 after gaining two years of experience in the premier class and was quick to make a name for himself. He ultimately took third place in the rider standings in his first season with Yamaha. Though the 2018 season proved to be tough, the Spaniard kept his motivation high and won the race at Phillip Island. He finished the season in fourth place overall, just five points behind his teammate in third position.

Maverick Vinales sharing, “We are here in Jakarta to start the new season. This year‘s team presentation was very special, because there are many changes compared to last year. The most noticeable of course are the new team colours and the bike livery. As soon as I saw it, I couldn‘t help but feel excited to start the new season. It will be a completely fresh start for all of us: new title sponsor, new team colours, and for me a new rider number. It all came together very nicely, so now all we have to do is get the preseason underway! The winter months were a good opportunity to prepare for 2019 season. I had some time to relax and reflect, but a good part was spent training, so I‘m ready to start riding my M1 again. We ended last year‘s season stronger than we started, so it will be important to keep that momentum going as we prepare for the first race in Qatar in April. Our first chance to see where we stand is at the Sepang Test in a few days‘ time. I‘m looking forward to it, because I have high expectations for this year. My motivation hasn‘t changed, and I plan on going all out this season – ’Beast Mode On‘!” 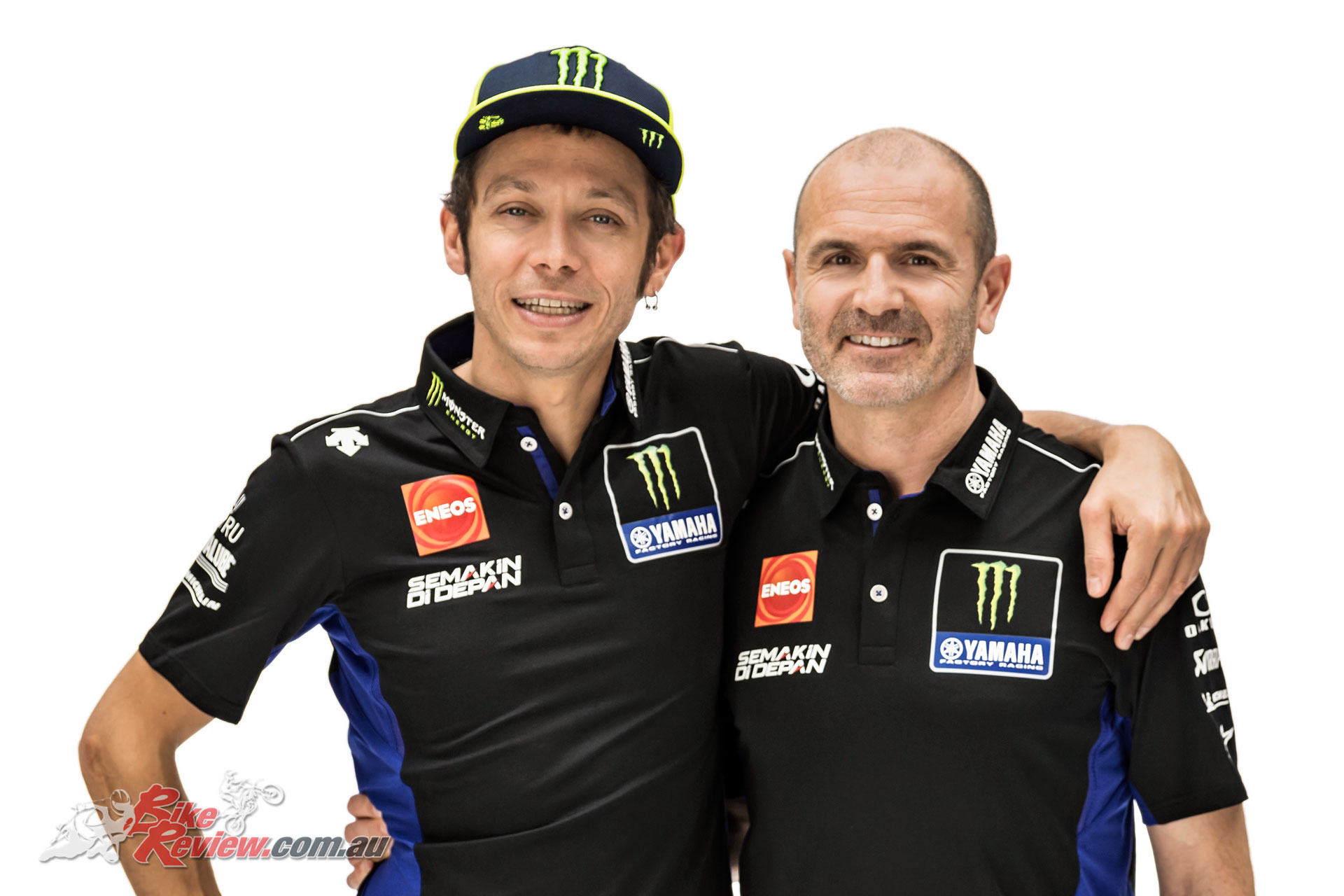 Massimo Meregalli – Team Director adding, “With the very important Sepang Test starting in just two days, I chose to be in Sepang working with Sumi-san and the YMC staff, as well as our team staff – several of which are new for 2019 – to be best prepared for the start of the new season. Like I said, we‘re starting afresh and there is always a sense of excitement that comes with new beginnings. I‘m sure the entire crew, as well as the riders, can‘t wait to get back into action. We already laid the foundation for the 2019 preparation during the tests in Valencia and Jerez at the end of last year. The upcoming week will be very important, because we will use the test in Sepang to confirm the choices we made. It will be a crucial first stepping stone to success in 2019.”

Valentino and Maverick were given the honour and they proudly presented the 2019 Yamaha YZR-M1. Its colour scheme has completely changed, with the team‘s M1 sporting a ’Monster Energy black‘-to-’Yamaha Factory Racing blue‘ gradient, including subtle blue stripes that add further dynamic to the sleek design. This perfect blend between Yamaha‘s aesthetic and Monster Energy‘s instantly recognisable claw branding is also represented in the new Monster Energy Yamaha MotoGP Team logo, as well as the new team gear and leathers modelled by Valentino and Maverick.

Besides the prominent Monster Energy branding, the team was also pleased to announce that throughout the 2019 racing season the bike will continue to feature the slogans of Yamaha Indonesia Motor Manufacturing, Yamaha Motor Vietnam Co., Ltd., Yamaha Motor Philippines, Inc., and Thai Yamaha Motor Co., Ltd.