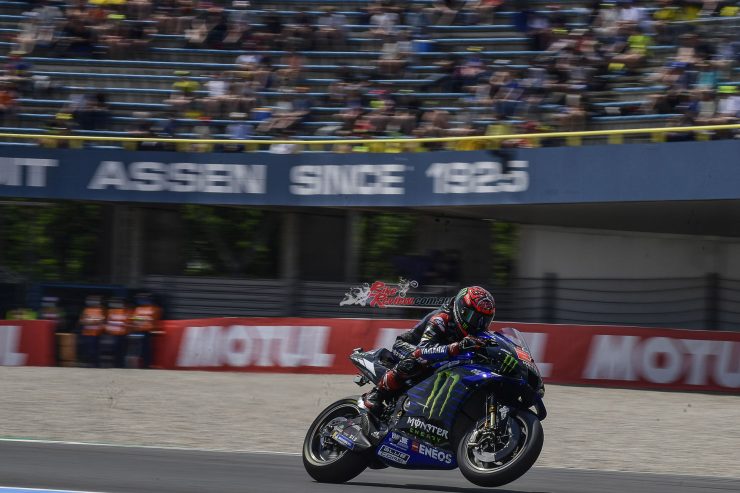 Round Preview: MotoGP Heads To Assen This Weekend!

It’s called the Cathedral for a reason. Only missing in 2020 due to the changes obliged to the calendar, the TT Circuit Assen has otherwise been a mainstay of motorcycle Grand Prix racing since the world’s first motorsport World Championship began in 1949. Gear up for all the action this weekend… 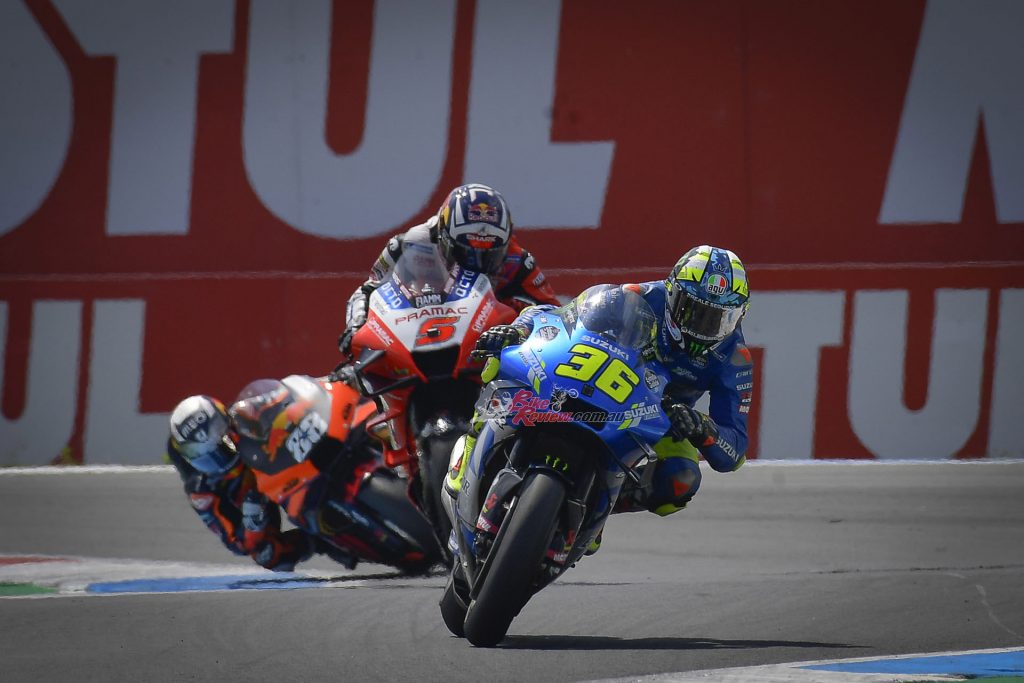 History meets modernity at a true jewel on the calendar. This is the TT Circuit Assen..

After deposing the “no Yamaha win since 2009” stat at the Sachsenring, Fabio Quartararo (Monster Energy Yamaha MotoGP™) arrives on the front foot and with his eye on another: no one’s won back to back at Assen since Valentino Rossi did it in 2004 and 2005. Since the Quartararo reigned last year in the Netherlands, it’s within reach… and his form only backs that statement up yet further. Three in a row would be quite a way to head into summer break.

Elsewhere at Yamaha, Darryn Binder (WithU Yamaha RNF MotoGP™) and Andrea Dovizioso will want more, the latter a former podium finisher at Assen and the former looking for a bounce back before summer break. Franco Morbidelli (Monster Energy Yamaha MotoGP™), meanwhile, continues looking for a big step forward, the Italian well outside his already conquered postcode of the podium fight so far in 2022. 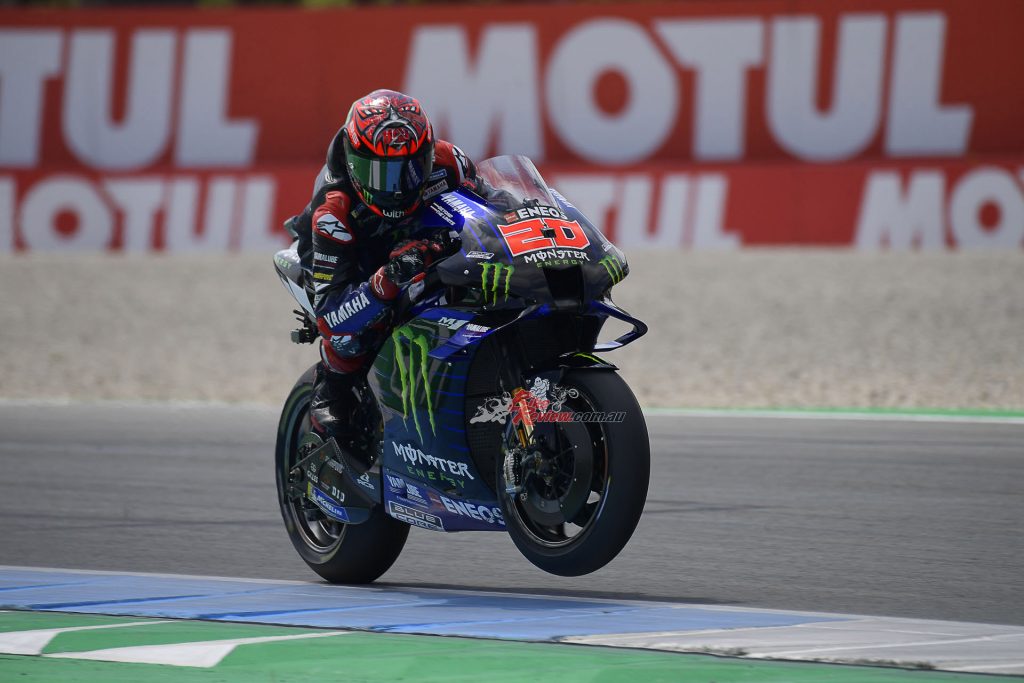 The venue has gone from a long street circuit to a shorter but no less incredible track over the seven decades since, creating some of the greatest racing in the world every time MotoGP return.

At Aprilia, meanwhile, it can raise a smile that one of their worst races of the season so far, all told, is still in fact what the Noale factory would have been aiming for at the start of just last season. “Worst” describing fourth place for Aleix Espargaro (Aprilia Racing) still maintains the number 41 in second overall and was another consistent, big-points finish he’ll be looking to build on again.

On the other side of the garage there’s another two-sided coin for Maverick Viñales from Germany too: he suffered a technical issue and had to retire, but he had to retire after having been pinned to the back of his teammate for some time, looking like a podium charge was on the cards. Will there be one at Assen? It’s those final laps of the race, the ones we didn’t get to see at the Sachsenring, where ‘Top Gun’ often shines, and everything seems to be coming together. 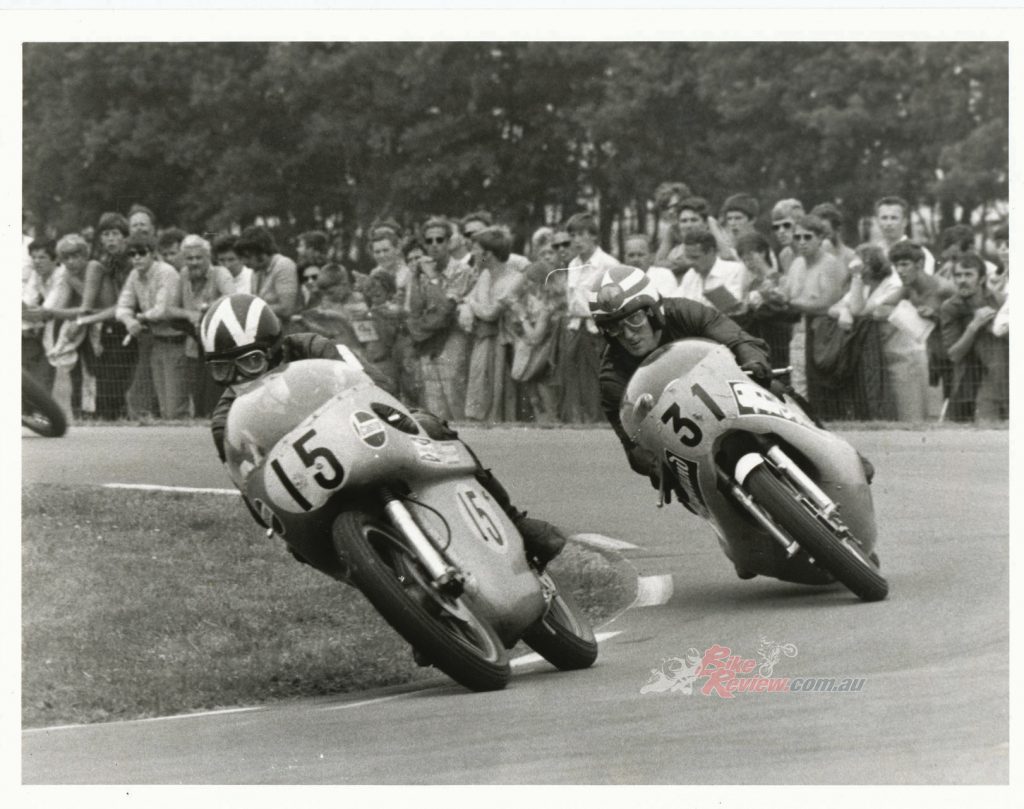 It’s called the Cathedral for a reason. The TT Circuit Assen has otherwise been a mainstay of motorcycle Grand Prix racing since the world’s first motorsport World Championship began in 1949.

That statement is also true of Johann Zarco (Prima Pramac Racing). The Frenchman is on a steady upward curve of results with the next natural number in the progression being 1 aka the win. As satisfying a stat as that would be, his recent run already stands alone as impressive. Now third overall – and top Ducati in the Championship – can he pull another podium out the bag?

Jack Miller (Ducati Lenovo Team) did just that in Germany to put some tougher races behind him, and ‘Thriller’ did it despite a Long Lap penalty too. Of all those on the grid, Miller’s memories of Assen are probably the sweetest as he took that incredible win in 2016, so what can he do in 2022? And can Jorge Martin (Prima Racing) find something more? What will Luca Marini (Mooney VR46 Racing Team) and Fabio Di Giannantonio (Gresini Racing MotoGP™) have in the locker after impressive speed in Germany? Can Enea Bastianini (Gresini Racing MotoGP™) bounce back from a stint of going AWOL? 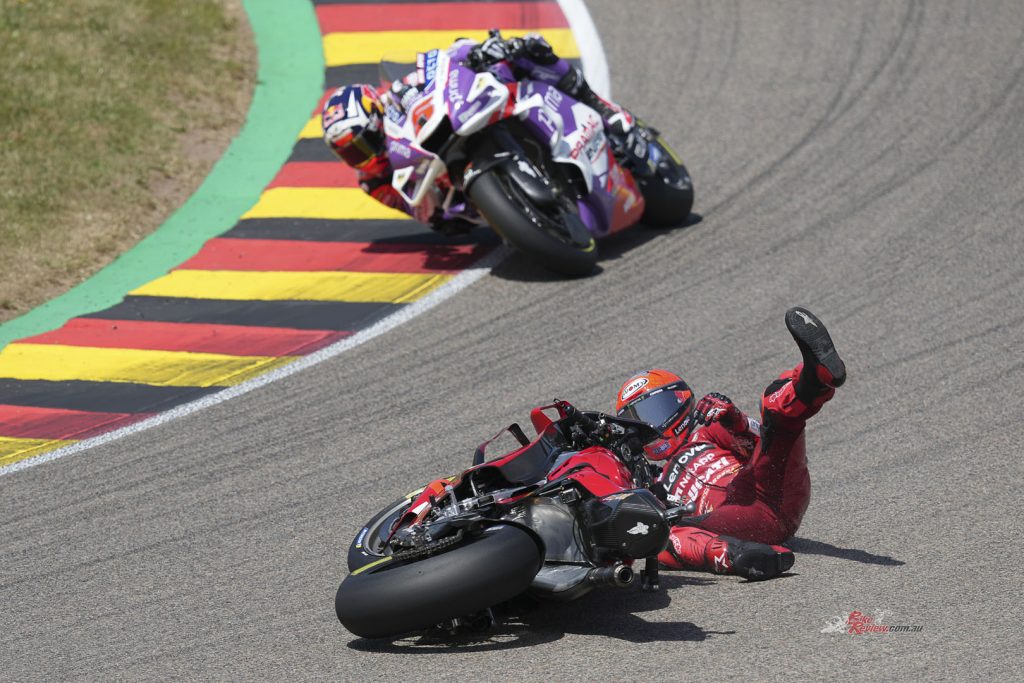 Pecco will be looking to put his bad luck from last round behind him as he missed out on valuable championship points.

Then, of course, there’s Francesco Bagnaia (Ducati Lenovo Team). From bad luck in Barcelona to a slide out of second at the Sachsenring, it’s been a tougher few weeks for the number 63. Assen hasn’t traditionally been the best for Ducati, but Pecco even has the track as a tattoo, having taken his very first win there in Moto3™ in 2016. He’s also reigned in Moto2™, and knows his way around the Cathedral. The gap to the top is now a big one, but the season is only half way done…

Lurking a single point above both Bagnaia and Miller in the standings, meanwhile, is the truest Sunday rider of late – in the best sense. No matter the grid position, when the lights go out Brad Binder (Red Bull KTM Factory Racing) wrings some magic out of his KTM, and he’s now into the top five overall. It’s never two or three positions either, it’s a charge as far as the charge can possibly go, and it’s paying dividends. Can he and teammate Miguel Oliveira – who is gaining back some solid form too – take that extra step forward at Assen? 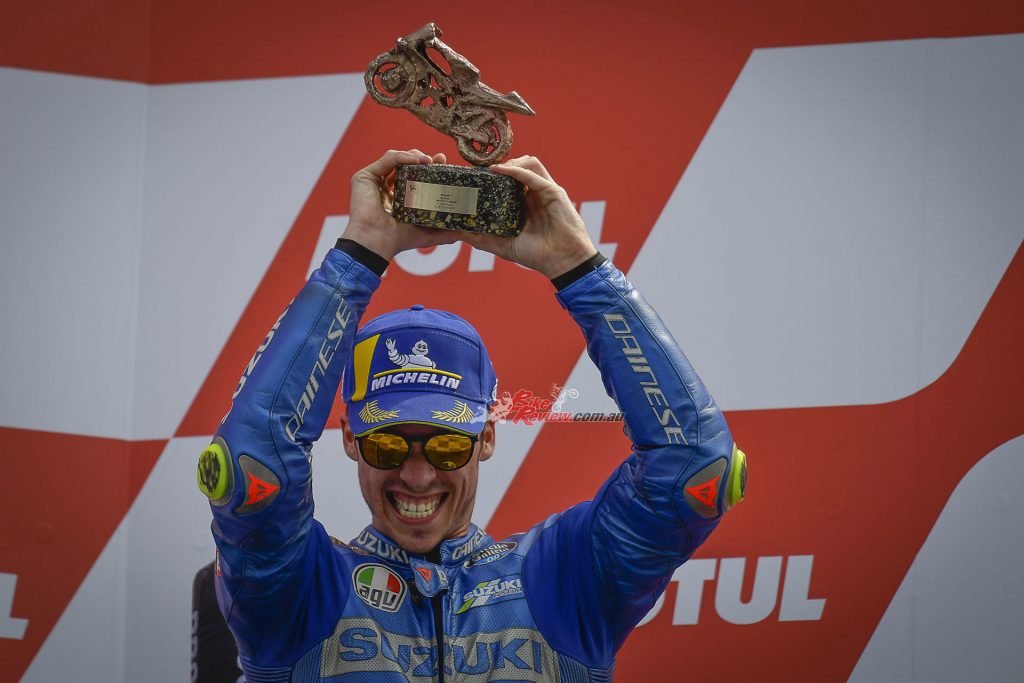 Another factory looking for more, in their case a real bounce back, is Suzuki. With Mir taking home a podium at Assen last year.

Another factory looking for more, in their case a real bounce back, is Suzuki. Joan Mir (Team Suzuki Ecstar) crashed out in Germany after that stunning charge in Barcelona, and the number 36 will be gunning for glory at Assen. Teammate Alex Rins, meanwhile, tried to take part put then hit a serious pain barrier before withdrawing due to his wrist. Can he try again at Assen?

Finally, Honda. The stat sounds a little brutal: no points for the first time since the French GP in 1982. But all told, that happening at the track where the marque won the previous 11 races probably takes the sting out, as is likely also true of the well-stocked trophy cabinet added to in the intervening decades. It’s a tough run, however, with Stefan Bradl the sole finisher for Repsol Honda Team, teammate Pol Espargaro riding through the pain barrier, Alex Marquez (LCR Honda Castrol) suffering a technical issue and Takaaki Nakagami (LCR Honda Idemitsu) sliding out. 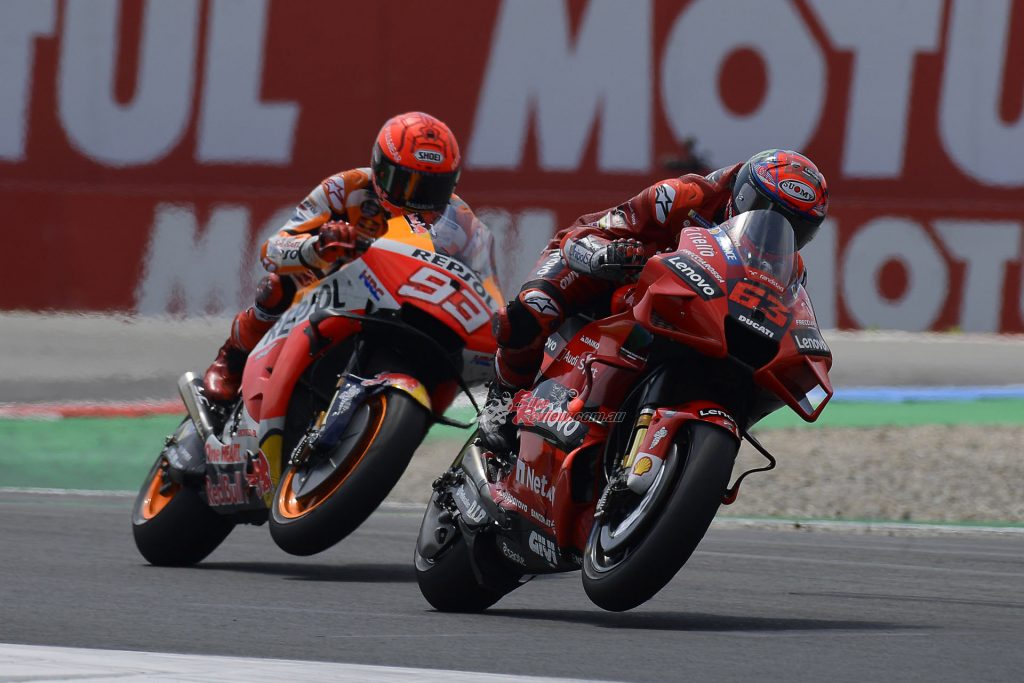 Classic, historic, and nestled in the north of one of northern Europe’s most vibrant countries, there have already been 72 great reasons to visit Assen – or tune in. This weekend provides the 73rd..

All four riders have shown much more this season already, so the TT Circuit Assen will certainly bring the factory back into the points as a minimum, and offer some more track time as they fettle the all-new Honda RC213V.

Classic, historic, and nestled in the north of one of northern Europe’s most vibrant countries, there have already been 72 great reasons to visit Assen – or tune in. This weekend provides the 73rd as MotoGP™ returns to the Cathedral, so join us at 14:00 (GMT +2) on Sunday for the final showdown before summer break!