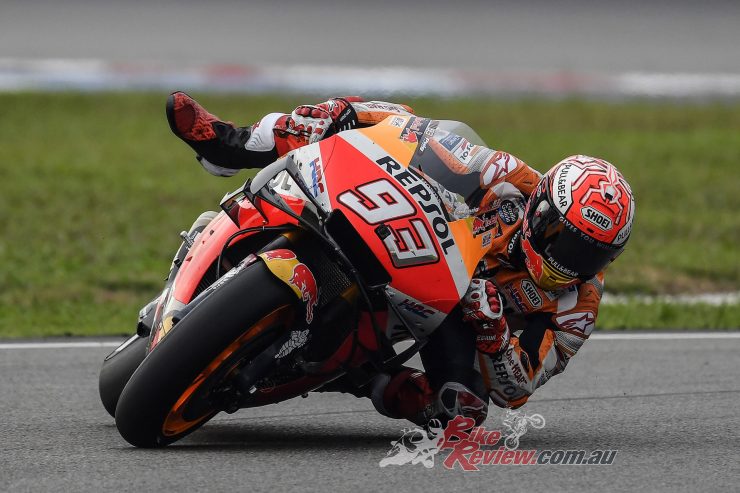 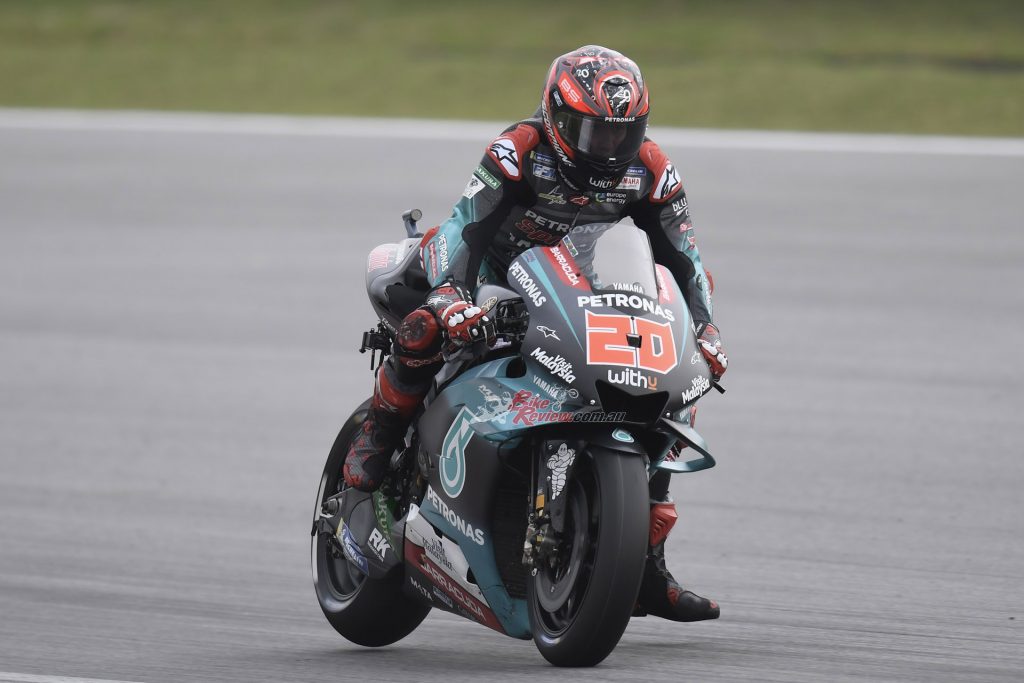 A frantic session started with Marquez backing out of his first flying lap, and soon after the 2019 World Champion was locked on to Quartararo. The rookie kept his head down on his first lap to take provisional pole, however, before Valentino Rossi (Monster Energy Yamaha MotoGP) then took over at the summit in Q2.

Quartararo remained unfazed though, firing in a stunner as Marquez quickly lost touch. The Hondas of Marquez and Cal Crutchlow (LCR Honda Castrol) were unable to do anything about the flying Frenchman, but Viñales was the next to take up the challenge and he managed to edge him out by just 0.087. 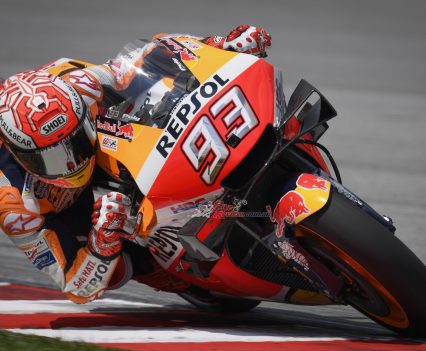 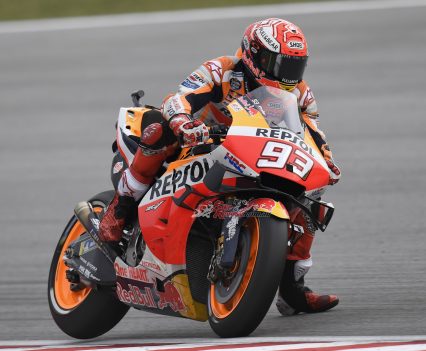 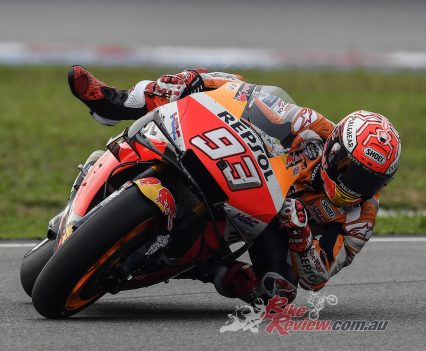 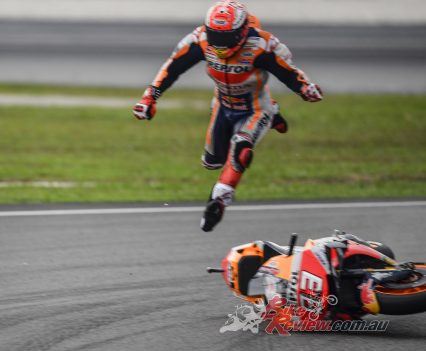 And then came the drama. As Quartararo headed out for his second run, Marquez rumbled out of pitlane right next to the Yamaha and shadowed him around Sepang, intent on remaining latched onto the rear of the fastest man on Friday. But would Quartararo ruin his next lap in order to not drag the World Champion round? The answer was no, and as the number 20 fired his Yamaha out of the final corner and down the straight, it was go time.

Despatching Danilo Petrucci (Ducati Team) to latch back onto Quartararo, Marquez made Turn 1 in hot pursuit before it all went wrong soon after. Pushing to stay with the rookie, the reigning Champion then suddenly suffered a highside and tumbled off in to the gravel at Turn 2 as Quartararo continued his final charge. 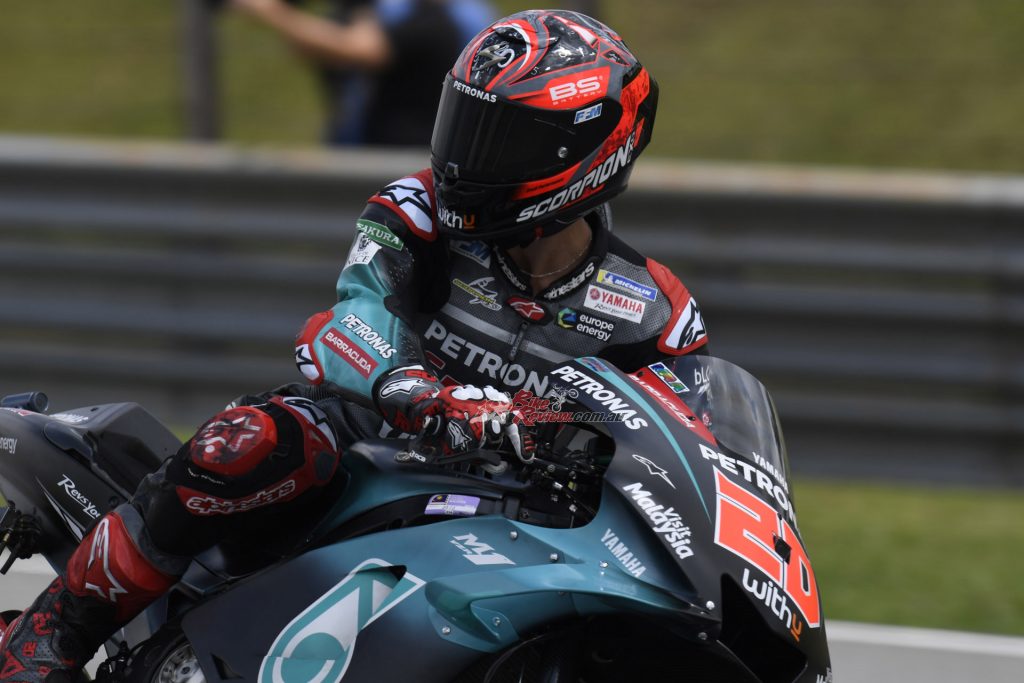 At the time of the crash, Marquez was fifth. As the red and yellow sectors lit up the timing screens for the rest, that started to look in doubt. And sure enough, it would all shuffle again. Quartararo was pulling out the tenths; 0.2 under halfway around the lap, 0.3 under at the third split…but would he hold on? A slight twitch at the final corner threatened to spoil a phenomenal lap but, although losing time, Quartararo took the chequered flag to take an immense fifth pole of 2019 and his sixth consecutive front row start.

Viñales and Morbidelli make it a Yamaha front row lockout in Malaysia in second and third, with a Ducati, Honda and Yamaha making up the second row: Jack Miller (Pramac Racing), Crutchlow and Valentino Rossi (Monster Energy Yamaha MotoGP). Alex Rins (Team Suzuki Ecstar) spearheads Row 3 in P7 ahead of Petrucci, with LCR Honda Idemitsu’s Johann Zarco having a sterling ride in Q2 to grab his best dry qualifying of the year in P9 – the second best Honda on the grid. 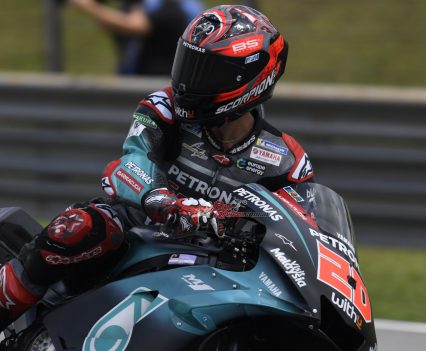 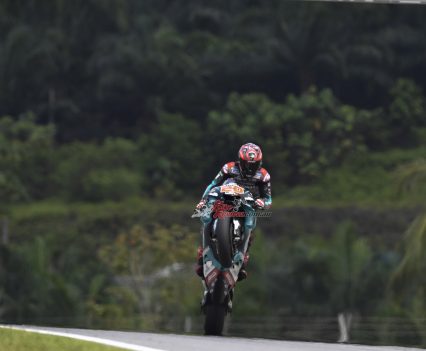 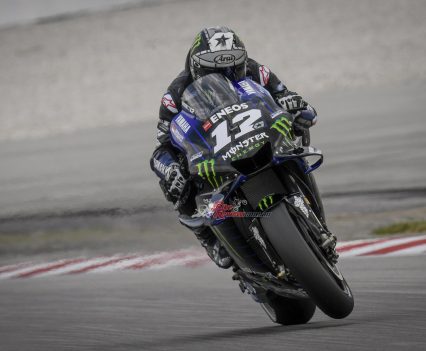 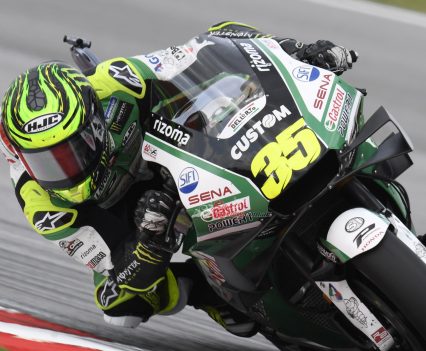 Andrea Dovizioso (Ducati Team) took P10 in the end and pipped the man he’s fought for the title for the last three years to the honour, with Marquez’ crash proving even more costly than it initially seemed and the number 93 down in P11 in his worst qualifying since Mugello 2015. Francesco Bagnaia (Pramac Racing) took P12 to start alongside him. 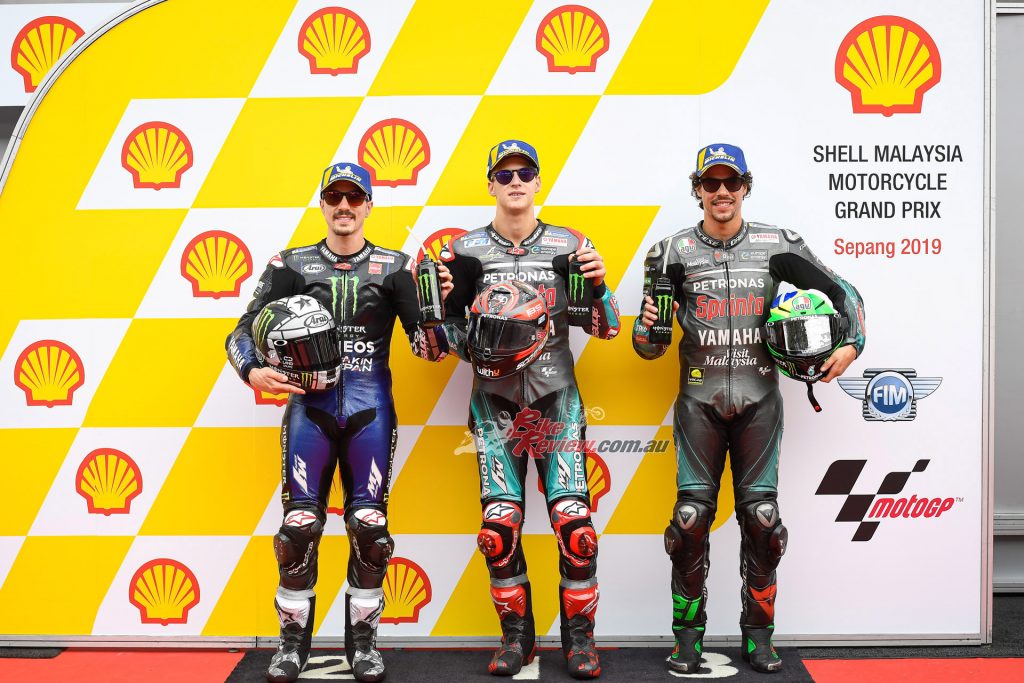 Throughout Moto2™ Q1 and Q2, the threat of rain was in the air as the odd wet weather flag waved around the Sepang International Circuit but thankfully, the heavens didn’t open. In Q1 it was Augusto Fernandez (Flexbox HP 40) who moved through, along with Stefano Manzi (MV Agusta Temporary Forward), Jesko Raffin (NTS RW Racing GP) and Somkiat Chantra (Idemitsu Honda Team Asia), and soon enough Q2 was underway. 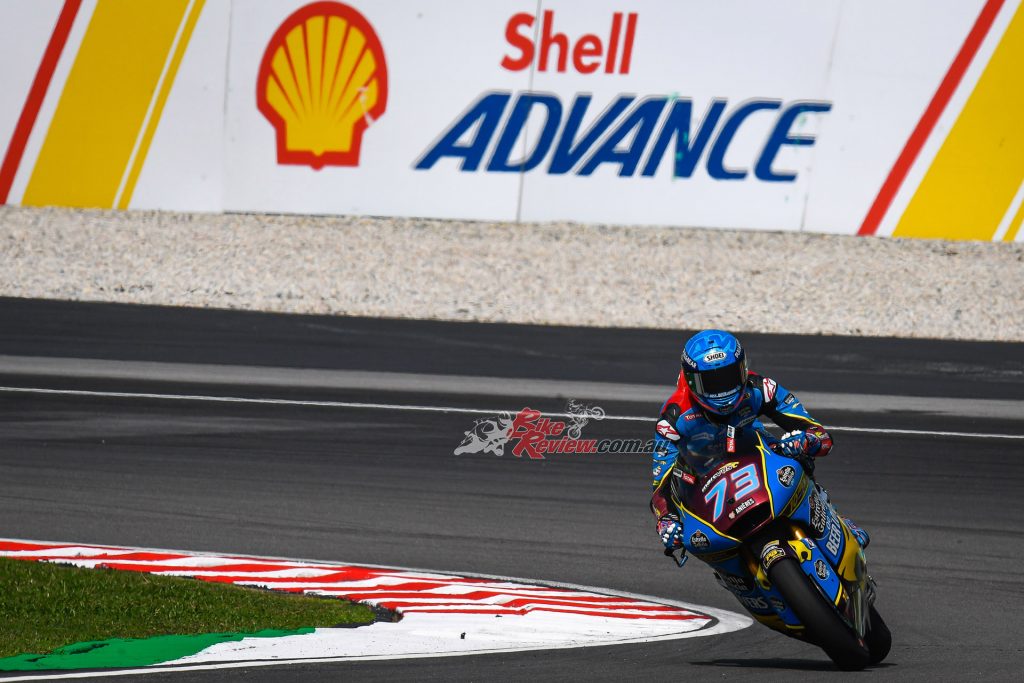 It was the worst possible start for one of the riders who still have a mathematical chance of claiming the title though, with Jorge Navarro (Beta Tools Speed Up) crashing at Turn 11 having not set a time. Meanwhile, second in the Championship Tom Lüthi (Dynavolt Intact GP) set the first benchmark before Marquez got going on his second flying lap.

The man leading the Championship by 28 points with two rounds remaining took provisional pole by six tenths, with his teammate Xavi Vierge and Jorge Martin (Red Bull KTM Ajo) climbing onto the provisional front row. Meanwhile, Binder had troubles on the first couple of qualifying laps and was lingering well outside the top 10, but the practice pacesetter managed to launch himself into P2 late on, before Nagashima also leaped up the timesheets and displaced him.

Vierge was then in fourth as Lüthi found himself on the outskirts of the top 10 with little time remaining. abd the Swiss rider needed a lap to propel himself further up the grid – and that’s exactly what he did, taking fifth with 30 seconds left on the clock. Friday’s fastest, rookie Jorge Martin (Red Bull KTM Ajo), took sixth as he eyes his third consecutive Moto2™ podium, locking out the second row. 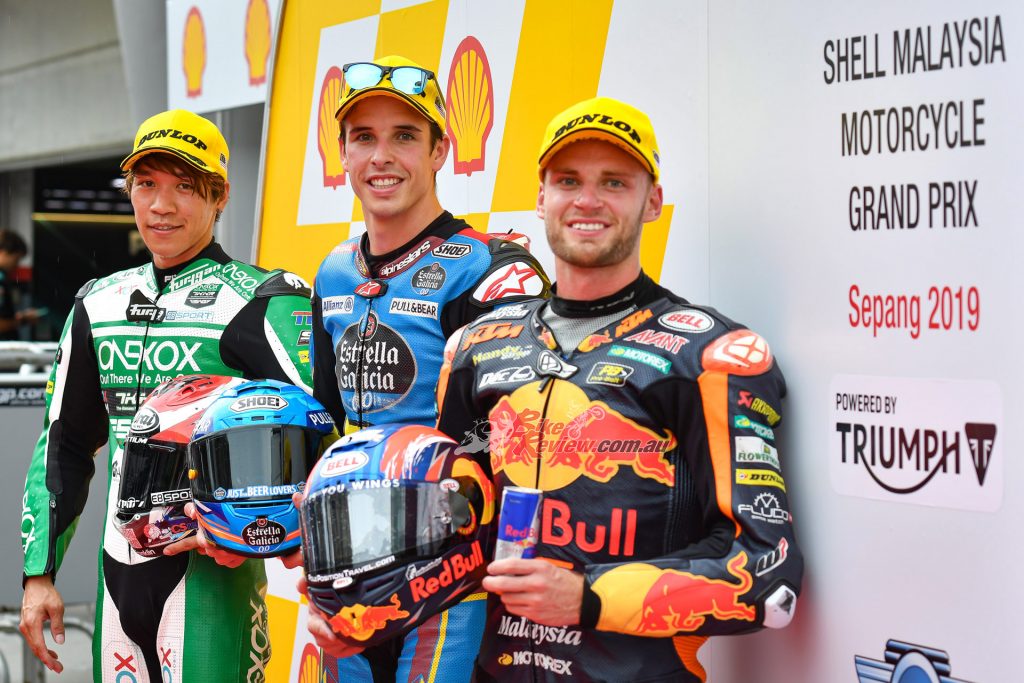 Fabio Di Giannantonio (Beta Tools Speed Up) took P11 as he aims to wrap up Rookie of the Year on Sunday, with teammate – and title contender – Jorge Navarro down in P15 by the end of the session. The Spaniard was able to get back out on track after his early crash but wasn’t able to move much further up the timesheets.

You know how it is – you wait a long time for your first Grand Prix pole position and then two come along at once! Or at least, they do for Marcos Ramirez (Leopard Racing) as the Spaniard put in an impressive final push in Q2 for the Shell Malaysia Motorcycle Grand Prix to secure P1, joined by Tatsuki Suzuki (SIC58 Squadra Corse) and John McPhee (Petronas Sprinta Racing) on the front row as they proved the only two men able to get within a few tenths.

In Q1 it was Albert Arenas (Gaviota Angel Nieto Team), Niccolo Antonelli (SIC58 Squadra Corse), Jaume Masia (Mugen Race) and Can Öncü (Red Bull KTM Ajo) who moved through, with a few tiny drops of rain starting to threaten but nothing that affected track conditions too much. And in Q2, the same few spots were here and there on track, but the fight for pole was allowed to roll on. 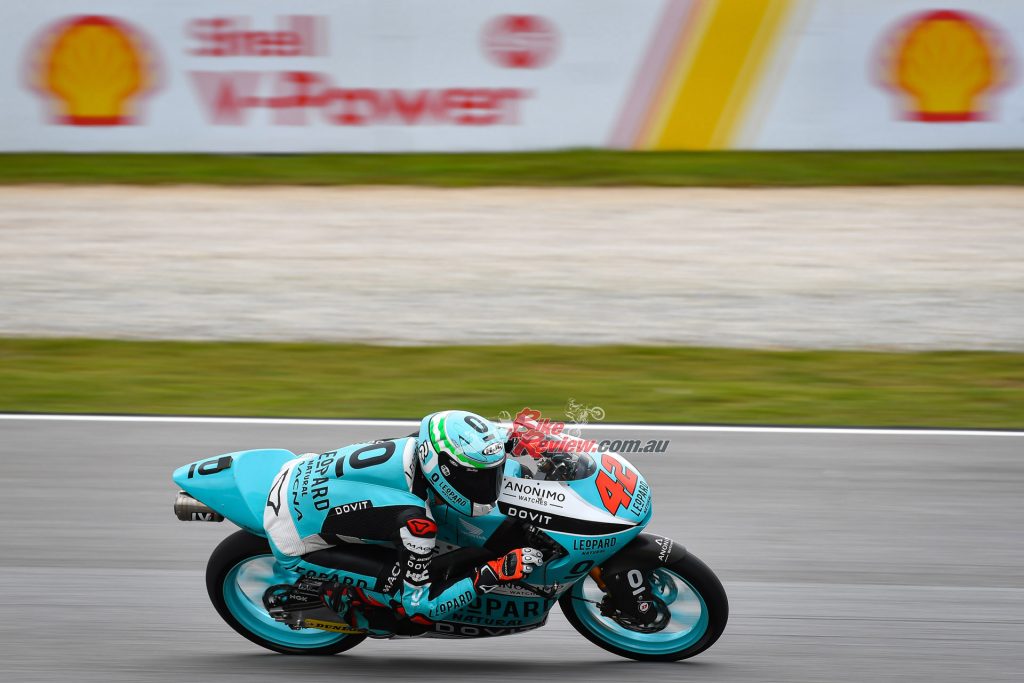 With the clock ticking down. it was Suzuki who was heading the timesheets before the riders headed out on their second runs – with everyone leaving it late, and some too late. One of them was the Japanese rider, who was in the gaggle pushing to get round for one last lash but just missed out – leaving his rivals with an open goal to try and beat his time.

Ultimately, only one man was able to put it all together on the final lap and that was Ramirez. The Spaniard lit up the timing screens with red sectors and brought it home to take pole number two in as many weekends, with Suzuki unthreatened by the rest to retain second and McPhee securing P3 on Petronas home turf.

Arenas took fourth and is top KTM despite heading through Q1, and he’s joined on the second row by Celestino Vietti (Sky Racing Team VR46) – who aims to take the Rookie of the Year title on Sunday – and Darryn Binder (CIP – Green Power), who put in his second best qualifying performance of the season. 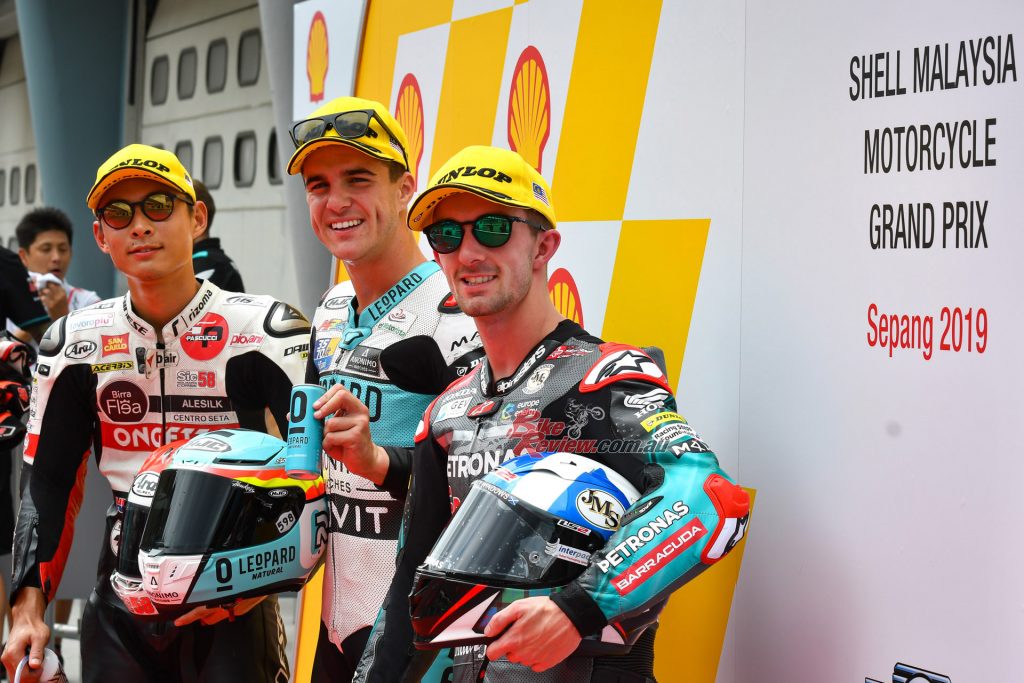