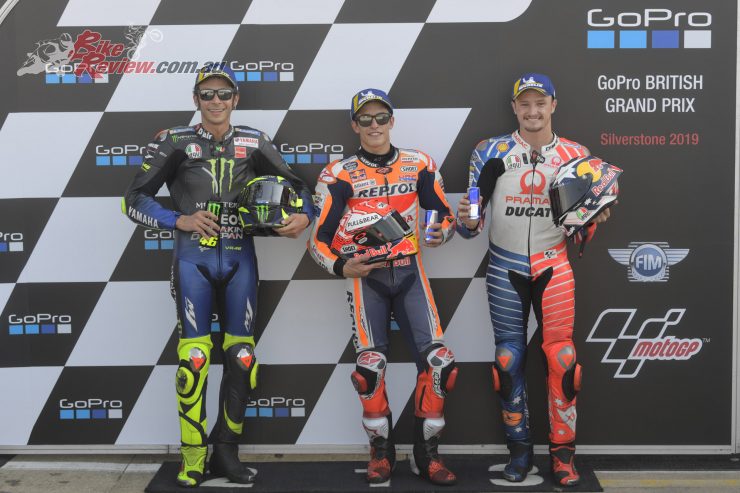 Repsol Honda Team’s Marc Marquez took pole number 60 of his career to steal P1 in a Q2 Silverstone MotoGP stunner, with everything going down to the wire and a three-man freight train of Marquez, Valentino Rossi (Monster Energy Yamaha MotoGP) and Jack Miller (Pramac Racing) fighting it out in the final seconds of the session. Pics: 2Snap 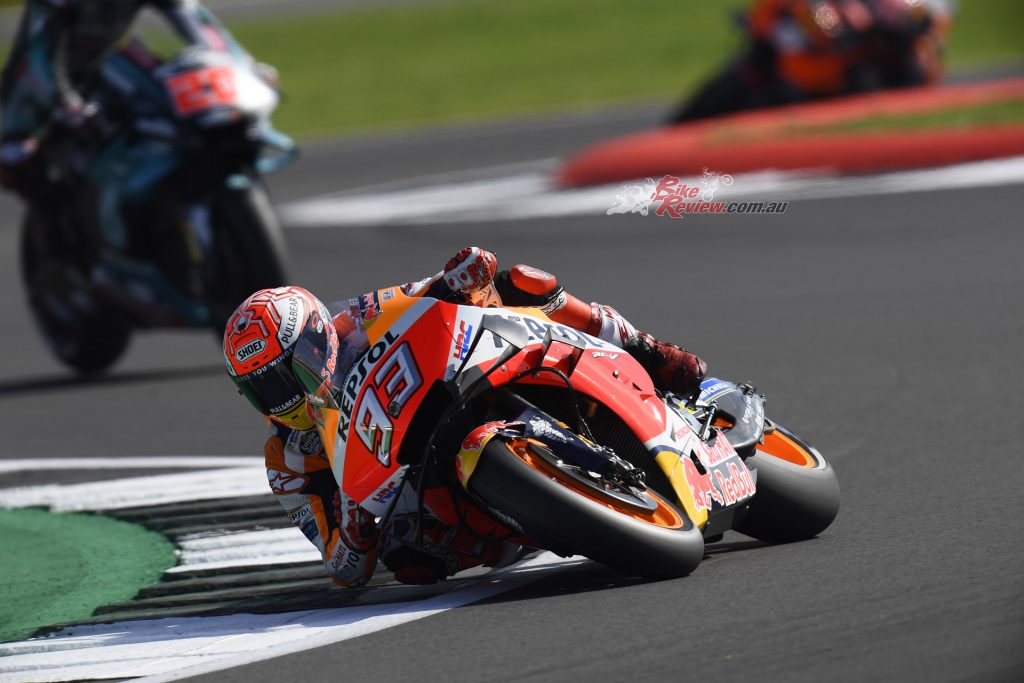 Over the line it was Marquez who took the upper hand, with MotoGP legend Rossi set to start P2 after taking his first front row since Austin and Miller alongside the two men on the front row in third. Turn 1 is going to be a stunner.

It was Andrea Dovizioso (Ducati Team) and Alex Rins (Team Suzuki Ecstar) who made it through from Q1 after finding themselves outside the top ten on Saturday morning, with the number 04 ultimately topping the session by 0.246 to set himself up for an assault on Q2. That Q2 didn’t disappoint, with the grid in the air until the final few seconds. 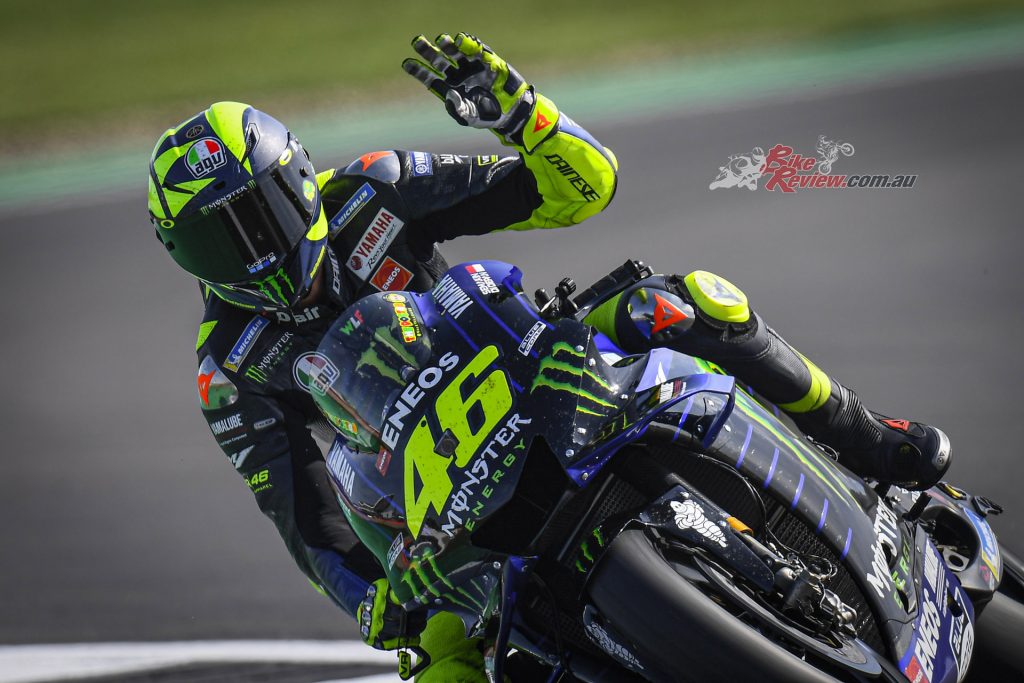 After the first run it was Free Practice pacesetter Fabio Quartararo (Petronas Yamaha SRT) who was on provisional pole, but the Frenchman came under threat once the final assault began. Rossi needed a lap time after having his maiden lap cancelled for track limits and ‘The Doctor’, Marquez and Miller came out of pitlane at the same time as a cat and mouse game proceeded on the out-lap, with no one wanting to lead.

After they’d almost ground to a halt on the Wellington Straight, it had to be go-time and needing a lap time the most, Rossi had to bolt. Marquez and Miller slotted into the tow, and all three were up in the first sector. And the second…and then the third – but Marquez was the man with the biggest margin, the reigning Champion a few tenths under Quartararo’s time by the final sector. 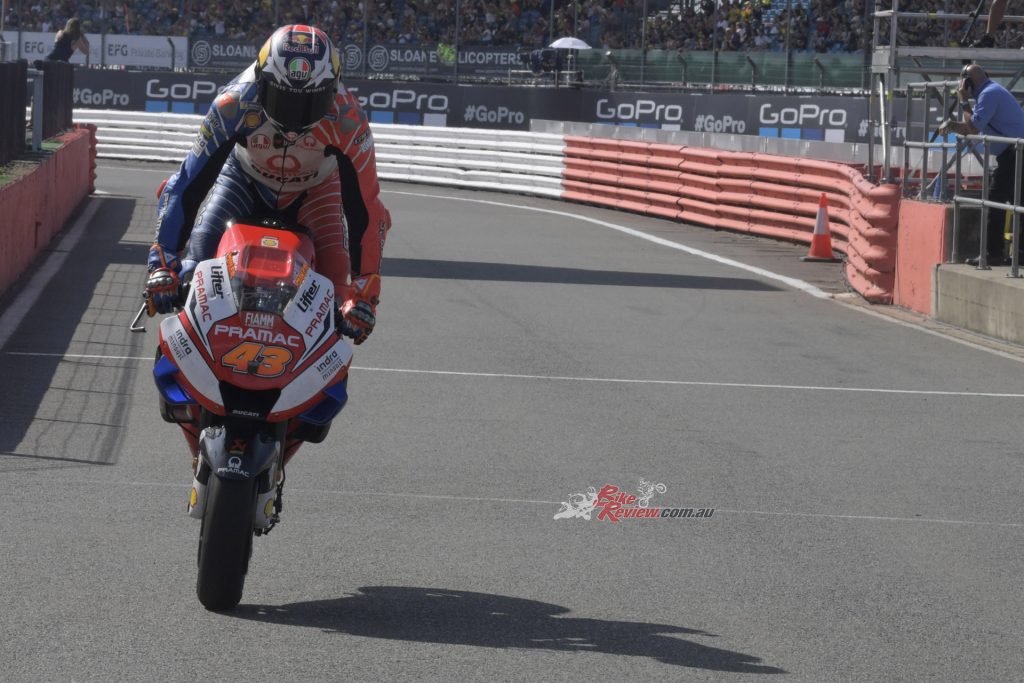 As the three barrelled round the final corner, Rossi was first over the line to take over at the top, before being deposed by Marquez just behind him. A split second later Miller stole third, leaving Quartararo relegated to fourth and a Marquez-Rossi-Miller front row.

As it transpired, an alarm on the dash had caused the Frenchman to switch to his number two bike and there wasn’t time to change the front tyre. So Q2 may have been out of reach, but El Diablo’s FP4 pace says he’ll be guns blazing on Sunday afternoon… 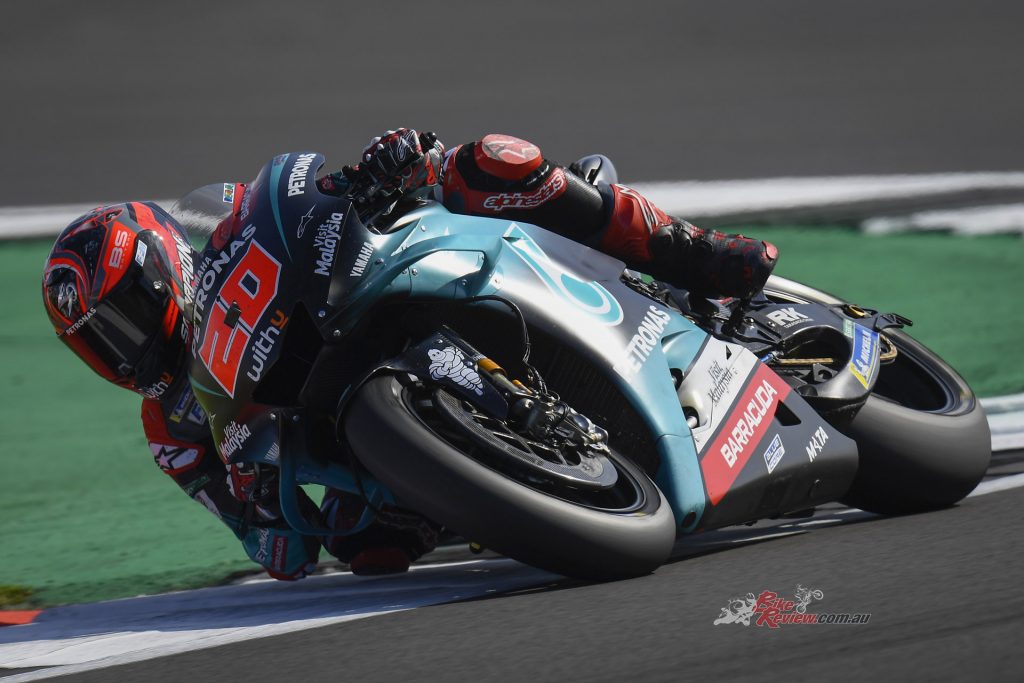 Alongside Quartararo on the second row is Rins after a solid session despite the Suzuki rider’s journey through Q1, with Maverick Viñales (Monster Energy Yamaha MotoGP) slotting into sixth after he’s shown good speed all weekend at the track that saw him take his first premier class win. Dovizioso, who topped Q1, will line up seventh and will be gunning for another characteristic stunner of a start, although the Italian’s fastest laptime was identical to that of Viñales. 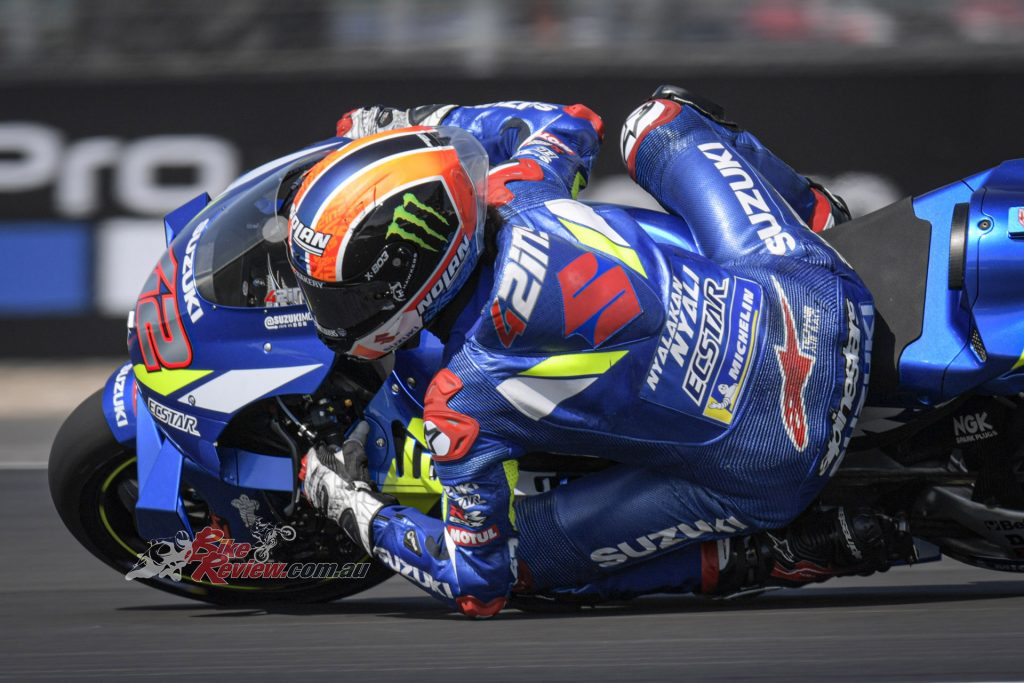 Danilo Petrucci (Ducati Team) had a tough day at the track where he took his first podium and was P11, ahead of Aleix Espargaro (Aprilia Racing Team Gresini) and the Red Bull KTM Factory racing duo of Pol Espargaro and Johann Zarco. Red Bull KTM Tech 3’s Miguel Oliveira was only just off the factory duo in P15. 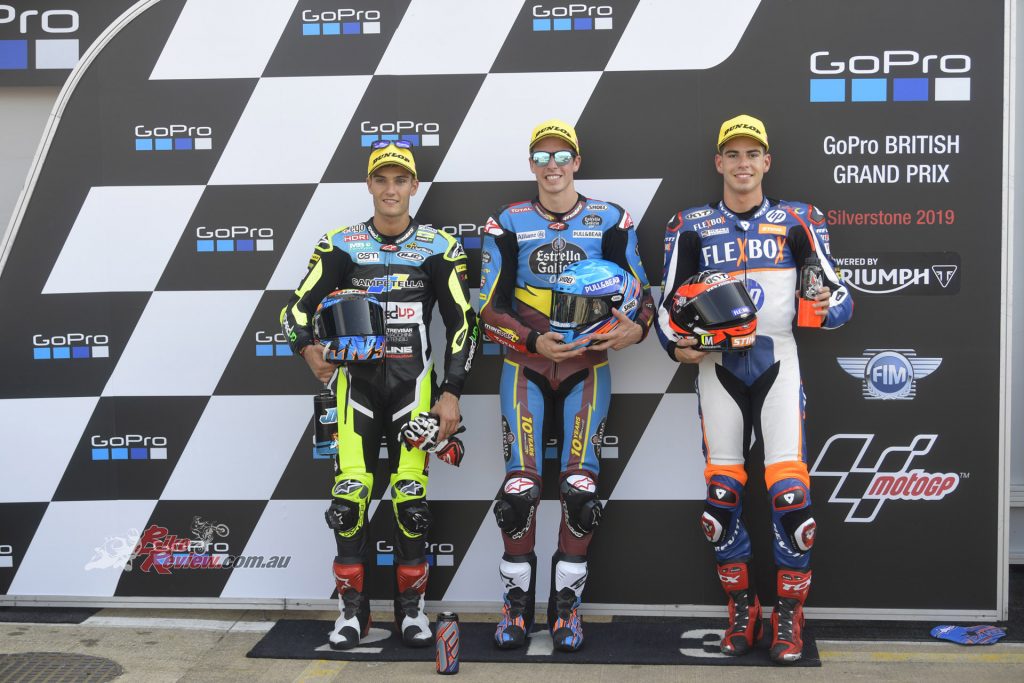 It was Navarro – like he had done for much of the weekend – who set the early pace in Q2, his time just fractionally slower than his lap record. Fernandez took over next with a new fastest ever lap around Silverstone, with Marquez slotting himself into P2 behind his countryman. Navarro was then improving and it looked like he could be on for pole, but so was Marquez and it was the latter who set the better time. With two minutes left on the clock, Marquez had provisional pole.

Ultimately, that’s how it would remain. Marquez held on to upset Speed Up’s hopes of a Silverstone pole as the duo had a cushion to the rest of the field, with Fernandez finishing the day 0.213 off Marquez to complete a tasty looking front row.

Remy Gardner (ONEXOX TKKR SAG Team) continued his good weekend to spearhead the second row in fourth, and EG 0,0 Marc VDS have two bikes in the top five thanks to Xavi Vierge’s 2:04.770, the Spaniard claiming his best Q2 result since Assen in P5. Luca Marini (Sky Racing Team VR46), meanwhile, will be aiming to make up for his crash in Austria as he goes racing from P6. 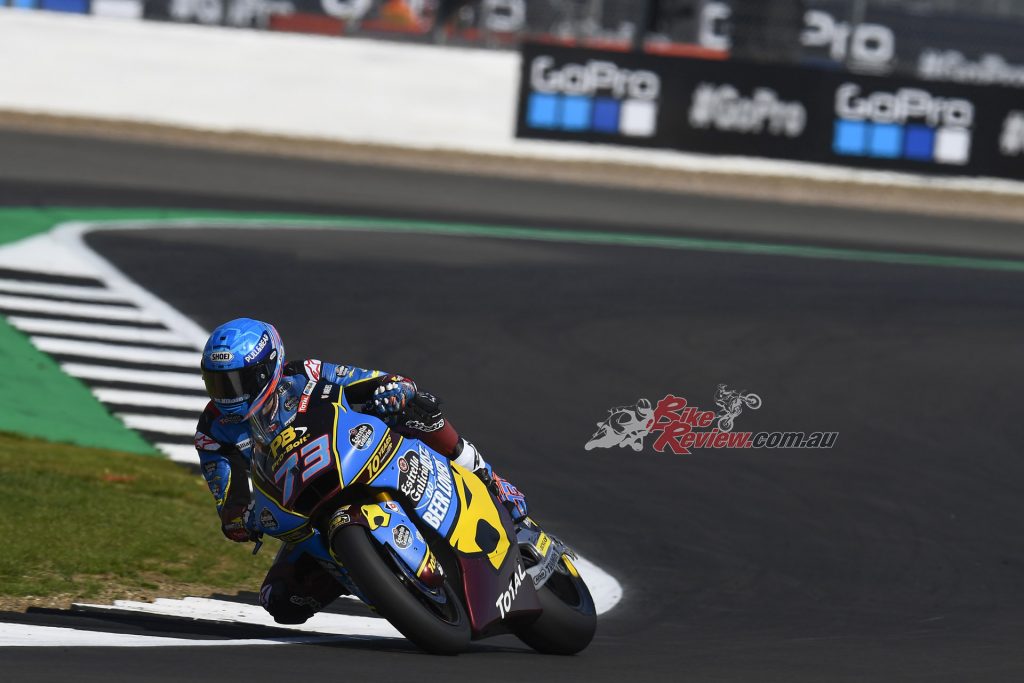 Tetsuta Nagashima (ONEXOX TKKR SAG Team) didn’t let an FP3 crash faze him to take P7 at the British GP on Saturday, the Japanese rider will lineup alongside Q1 graduate and Austrian GP race winner Brad Binder (Red Bull KTM Ajo) again after the two sat next to each other at the Red Bull Ring, although then it was on the front row. On his last flying lap, home hero Sam Lowes (Federal Oil Gresini Moto2) ensured he’ll start from inside the top 10 in P9, with rookie Fabio Di Giannantonio (Campetella Speed Up) completing that top 10 just behind him.

Another rookie, Nicolo Bulega (Sky Racing Team VR46), was 11th, and he got the better of Championship contender Tom Lüthi (Dynavolt Intact GP), who ended up P12 after a crash in Q2. He’s just ahead of his teammate Marcel Schrötter, with Mattia Pasini (Tasca Racing Scuderia Moto2) and Iker Lecuona (American Racing KTM) completing the fastest 15. 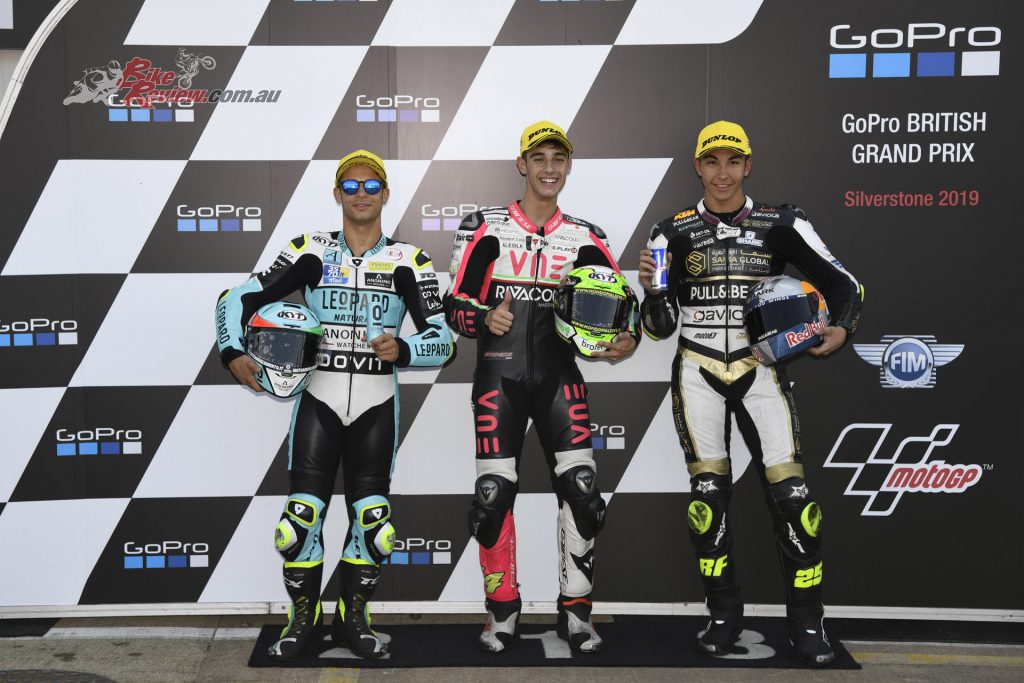 It was Kaito Toba (Honda Team Asia) who topped Q1 to lead the troops through into Q2, with the Japanese rider joined by Fernandez, Ayumu Sasaki (Petronas Sprinta Racing) and the man leading the Rookie of the Year standings, Celestino Vietti (Sky Racing Team VR46) to do battle for the top 18 positions on the grid. The sun was shining, the stage was set and the field were ready to fight it out.

In that fight, a first run left Arbolino fastest and the clock ticking down as the field returned to pitlane. The plan? One final dash, with most the field leaving it late and having only seconds to spare as they streamed over the line for a final fast lap. But in such a huge group squabble, there were few able to improve…and Arbolino’s 2’11:631 was a goalpost too far for the field. The Italian took his third pole of the year, setting him up for an assault on a third win of the year.

Dalla Porta was the only man in the same postcode and the Italian was just 0.079 off his compatriot’s pole position, doing what he needed to do to start from the front row as he pushes to stretch his Championship lead ahead of Aron Canet (Sterilgarda Max Racing Team). Canet, one of the only riders to improve on his second run, which he opted to do in clear air, was 12th. 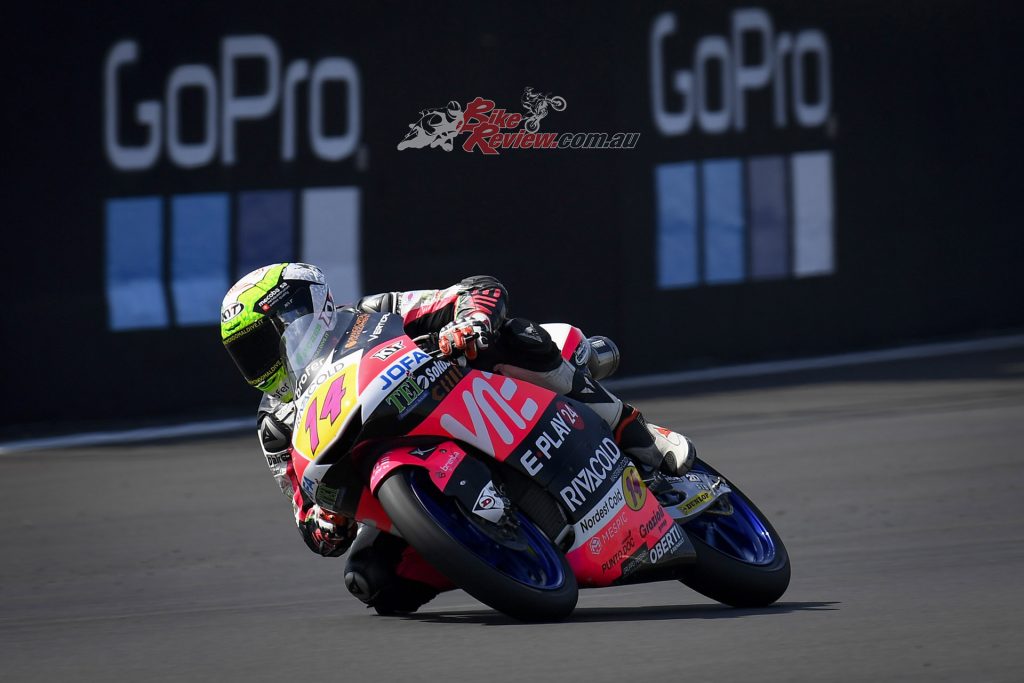 Raul Fernandez impressed to go from Q1 to the front row, four tenths off Dalla Porta, with Ayumu Sasaki another building on Q1 to impress in Q2. The Japanese rider heads up Row 2, ahead of Niccolo Antonelli (SIC58 Squadra Corse), who crashed in Q2 but had already done enough. Home hero John McPhee (Petronas Sprinta Racing) completes Row 2 as he prepares for battle on Sunday.

Sergio Garcia (Estrella Galicia 0,0) impressed to complete the top ten on his debut at Silverstone, finishing ahead of Tatsuki Suzuki (SIC58 Squadra Corse) and Canet. The three all bucked the trend and improved on their final runs. Jaume Masia (Bester Capital Dubai) and Romano Fenati (VNE Snipers) complete the fastest fifteen.