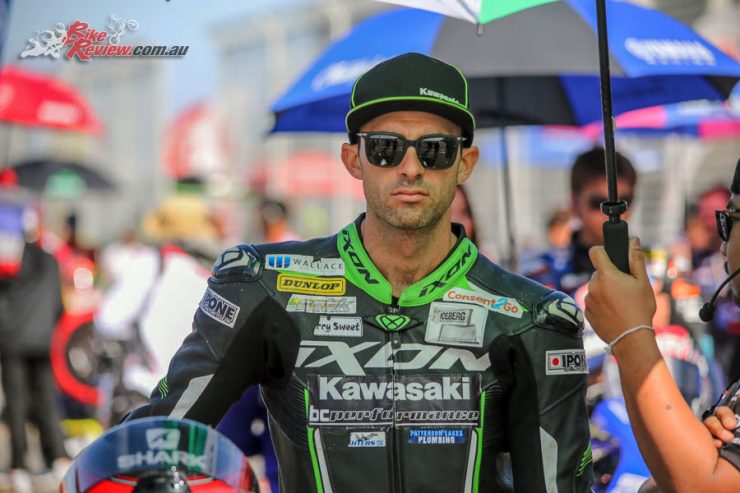 Bryan Staring’s good weekend just got better, with the Kawasaki BCperformance rider backing up his win in Race 1 of the ASB1000 class in the Asia Road Racing Championship (ARRC) with victory in Race 1 of Round 3 of the Motul Pirelli Australian Superbike Championship (ASBK) for International MotoFest at The Bend Motorsport Park (April 25-28).

Tom Toparis has put on a clinic in Race 1 of Supersport, while in YMI Supersport 300, Olly Simpson continued his good form from qualifying to take Race 1 in a similarly commanding fashion, ahead of an extraordinary fight for second place with the next nine riders covered by less than a second between them.

Mike Jones set the early pace in Qualifying 2 with a 1:52.392 in the first half of the session, before local South Australian Daniel Falzon became the first person to not just cross the 1:51 barrier all weekend, but smash it with a 1:51.592. That time was good enough to hold pole for most of the session, until after the chequered flag when Jones returned fire with a barnstorming 1:51.220 to snatch pole position out of the local’s grasp. Wayne Maxwell would start beside them on the front row, with a 1:51.675. 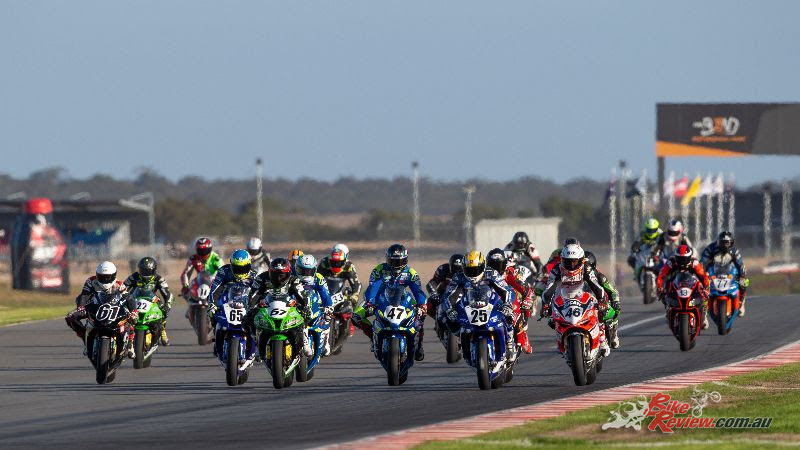 Off the start Arthur Sissis got a superb launch to lead them into turn one ahead of Falzon and Jones. A massive crash at turn three saw Team Suzuki ECSTAR Australia rider Alex Phillis brought down in a tangle with another rider, and the resultant low-side sending him into the side of Glenn Allerton. Phillis escaped without injury, but Allerton was in visible discomfort and was later taken to hospital after the race was red flagged.

The race was subsequently trimmed to nine laps and it was Falzon who led Jones off the restart and through turn one. Mark Chiodo got a superb start to work his way up to second, then passed Falzon before the lap was finished, powering on to the lead. Falzon briefly took the lead back before running wide and dropping to third. By the time the field crossed the line again it was Chiodo ahead of Jones, Falzon, Staring, Wayne Maxwell and Cru Halliday.

As the field settled down Chiodo looked to set a quick pace early, and only Jones was capable of going with him at the front with the rest of the field dropping a few seconds back. Maxwell crashed out of the race on lap three trying to take Falzon around the outside at turn one, and by half distance Jones was looking for a way past Chiodo as the Honda rider’s rear tyre started to lose its efficacy. Staring was continuing his good form from the Asia Road Racing Championship, holding third ahead of Cru Halliday and Josh Waters.

The leading Chiodo and Jones were slowly starting to fall back into the clutches of the pursing Staring and Halliday. Jones ran wide trying to take the lead off Chiodo at turn one on lap six, letting Chiodo back through and Staring seized his opportunity to go into second place. Staring set his sights on Chiodo and the Penrite Honda man made the CBR as wide as possible, before finally relenting when Staring made an easy pass for the lead on lap six. Staring was never headed from there, taking the chequered flag ahead of Jones and a fast-closing Cru Halliday, then Chiodo, Falzon, Waters and Glenn Scott.

“I’ve had such a good Saturday” said Staring. “The weekend since we started on Thursday has been all positive, and it’s carrying through to today. One of the things I enjoy the most about racing is when I see the people around me very happy” Staring said of his new teammates. “I love having their support and I love being able to contribute to putting the smile on their faces.” 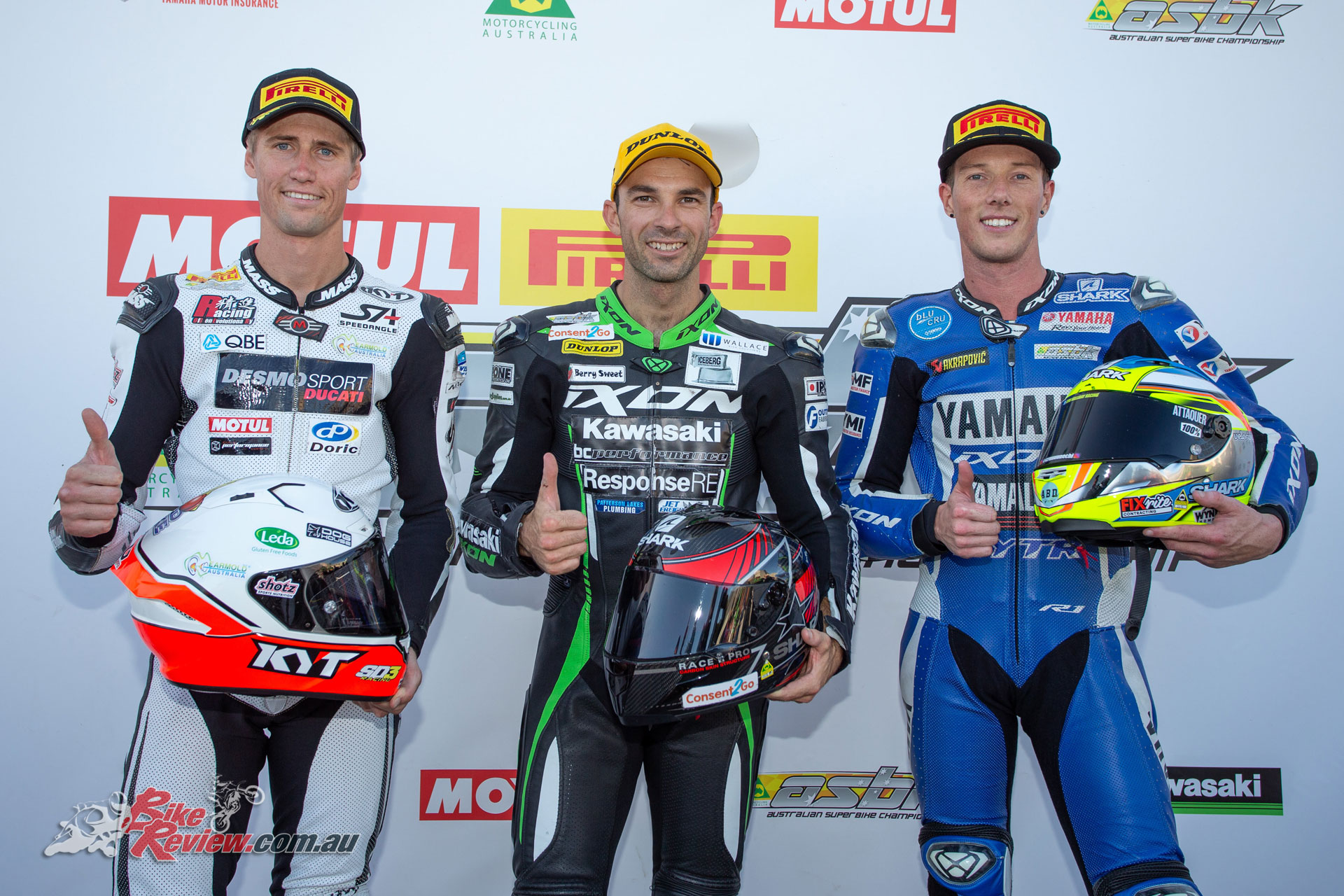 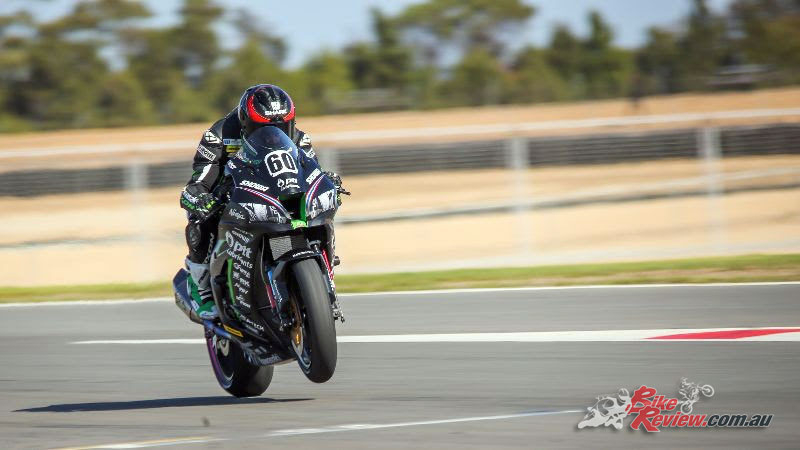 Staring, riding as an injury replacement for current championship leader ‘Tingnote’ Thitipong Warokorn, fought with fellow Australian Broc Parkes in the early laps, but Staring appeared to be able to manage his tyres better across the 12-lap distance, eventually pulling out a two-second lead over Parkes by the chequered flag.

Australian wildcard Yannis Shaw managed to pick up three championship points with his 13th place finish. Fellow wildcard Stephanie Redman crashed awkwardly in the morning warm-up and sustained a shoulder injury, ruling her out from Race 1.

Bryan Staring saying, “It was good, obviously the end result was good! I made a cracking start, a small mistake maybe on the second lap and Broc came past me. He had really strong pace at the start and I sort of waited until I found my feet as I had the bike moving around a lot in the opening laps, and then once I got comfortable and everything sorted I put a big attack in. I closed the gap, and then I could see Broc starting to struggle for grip a little bit. I thought it was the right time to make a move and see if I couldn’t gap him a little bit. Overall fantastic result for me and I’m always happy to see the team happy, so thanks to Kawasaki for having me here.” 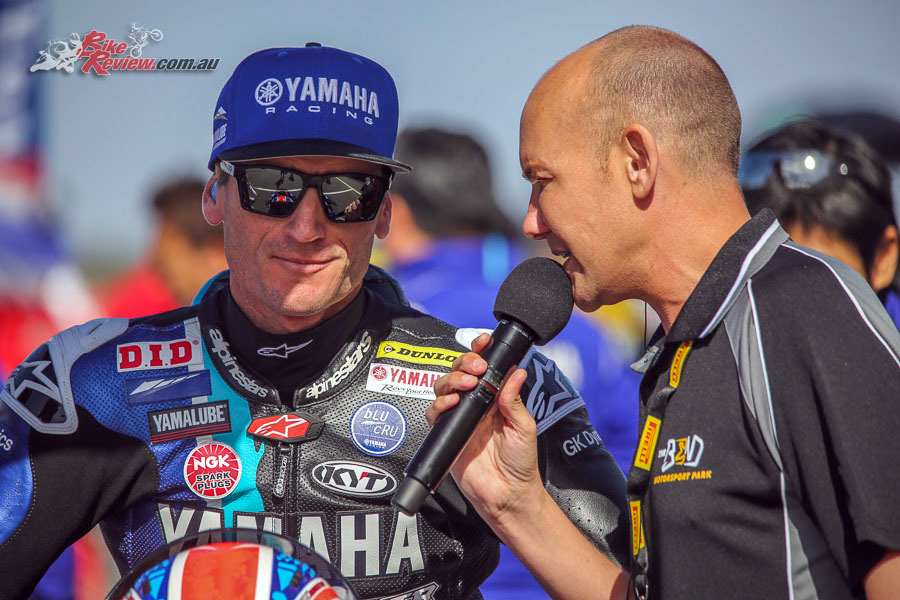 Broc Parkes saying, “It’s good for the championship, the points, but you know… I wanted to win. Bryan was a little bit stronger, a little more track knowledge than me here. I need to be a bit more conservative on the tyre. I got jammed in the first corner and was back to fourth; I had to come back and push a little bit hard at the start. We need to focus on improving a bit of everything: me, the bike… and hopefully come back tomorrow and try and fight to get the win”. 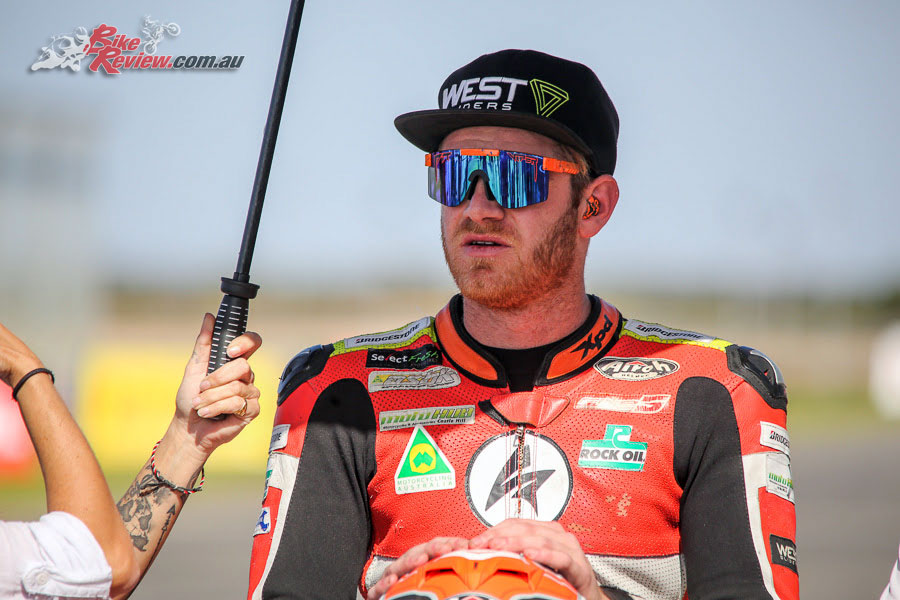 Yannis Shaw sharing, “We got a really good start, and were right up there dicing with a couple of the guys. Early on I made a few errors and the gap started to get a little further and further away, but I was in P12 which was good starting in 13th place. We kind of managed that gap to the rider behind me. Tyres started to get a little bit worn towards the end but we set into a rhythm, and then a little mistake into turn one dropped me back to thirteenth. But P13, we’re in the points and we’re stoked. We’re so happy.”

Off the start it was Toparis who settled into an early lead, with Nic Liminton behind ahead of Luke Mitchell and Reid Battye. Three laps in and Toparis had already built up a two second gap from Liminton, with Broc Pearson (1:56.867) settling into third seven seconds off the lead.

By halfway Toparis had extended his lead by another second, with Liminton and Pearson holding station. There were interesting battles through the midfield, with a group of five riders battling for seventh position, headed by Oli Bayliss and Zac Johnson, coming together on the second-last lap but both managing to stay upright.

Toparis ended the race five seconds up on Liminton, with Pearson, Battye, Dallas Skeer and Luke Mitchell making up the top six.

“Great race,” said Toparis on the podium. “The first two or three laps I was quite fast and then just rode to the conditions. I really love being in South Australia, this track is probably one of my favourites, such a good track to ride.” 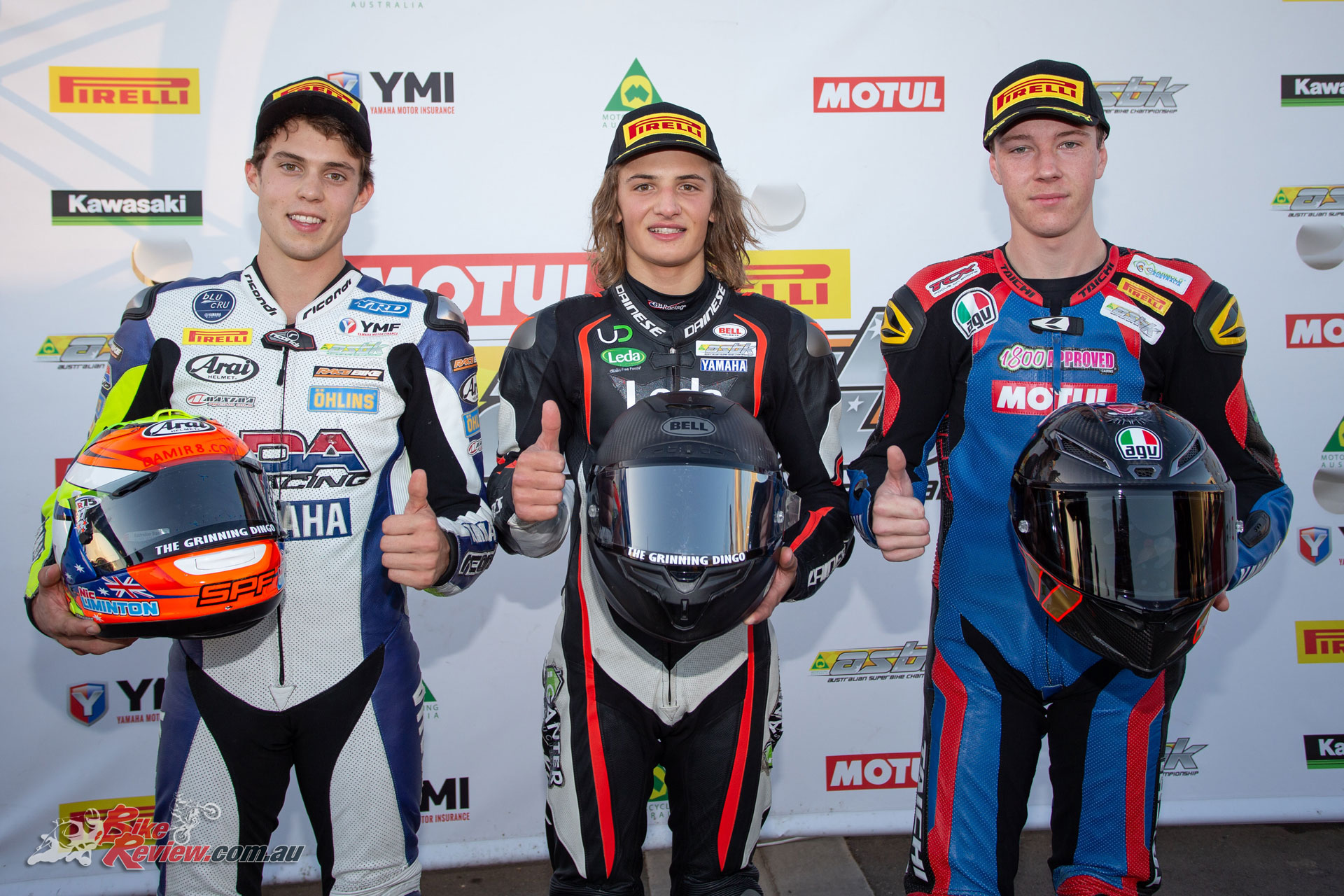 Olly Simpson claimed the early advantage on Lap 1, with a very hungry-looking Seth Crump immediately behind. It didn’t take long for Simpson to build up a gap though, and it was looking like the battle would heat up behind between Crump and the pursuing Hunter Ford until there was contact between the two, causing Ford to high-side off the bike and out of the race. 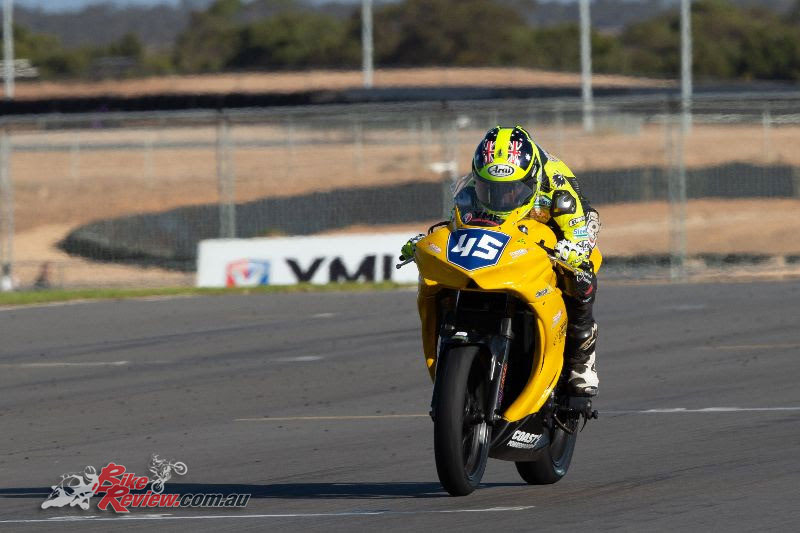 By half distance Simpson had checked out, six seconds up on the chasing pack and in cruise mode out the front The battle behind included almost half the field, with Locky Taylor, Zac Levy, Brandon Demmery, Max Stauffer and a whole host of others putting on a brilliant show for the fans.

Harry Khouri claimed overtaking manoeuvre of the day with a brilliant move up the inside of four-if-not-five riders into turn one on lap five to claim second place, before Ben Baker put him back to third.

The battle for second raged right to the final laps, with an incredibly close finish seeing Harry Khouri the best of the rest behind Simpson, with Baker, Demmery, Taylor and Senna Agius fighting right to the line for second spot. 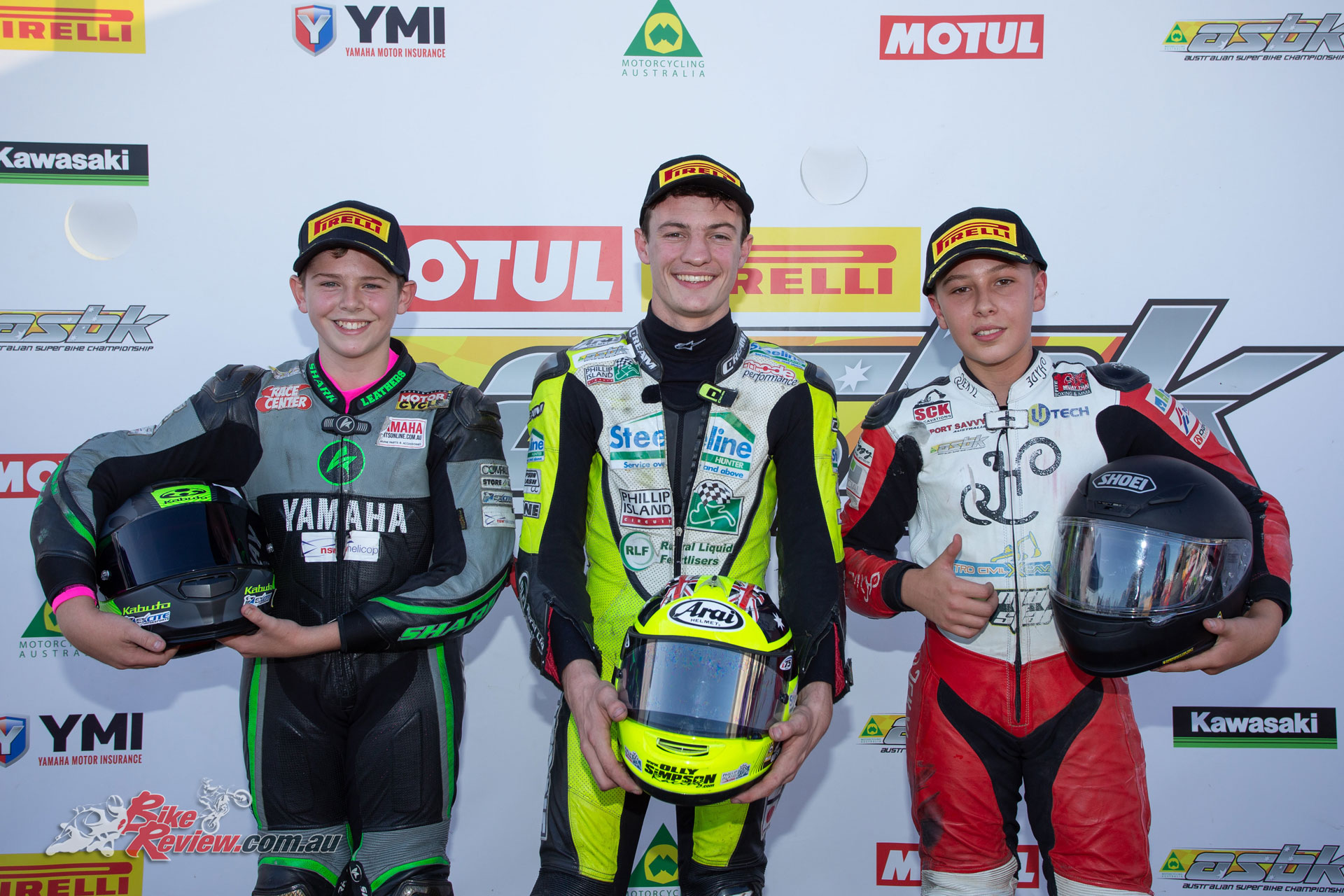