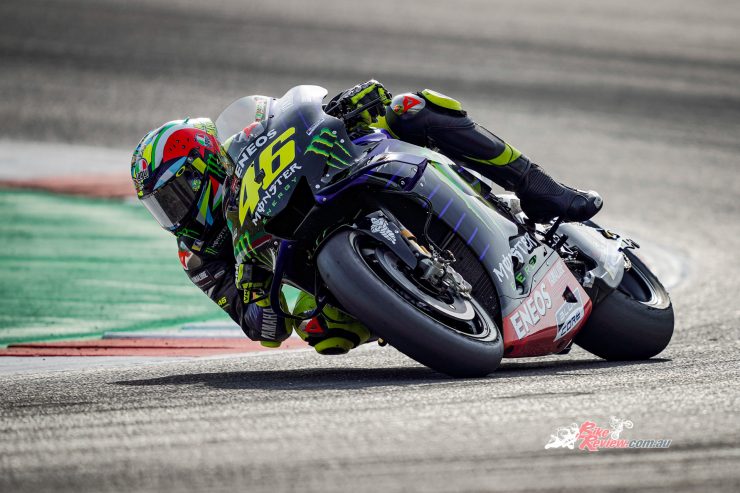 Amid the coronavirus outbreak that is currently affecting the entire World, many motorcycling events in Australia and around the World have been either postponed or cancelled. Some of these events include ASBK, MotoGP, Festival of Speed, BBB and the Isle of Man TT. 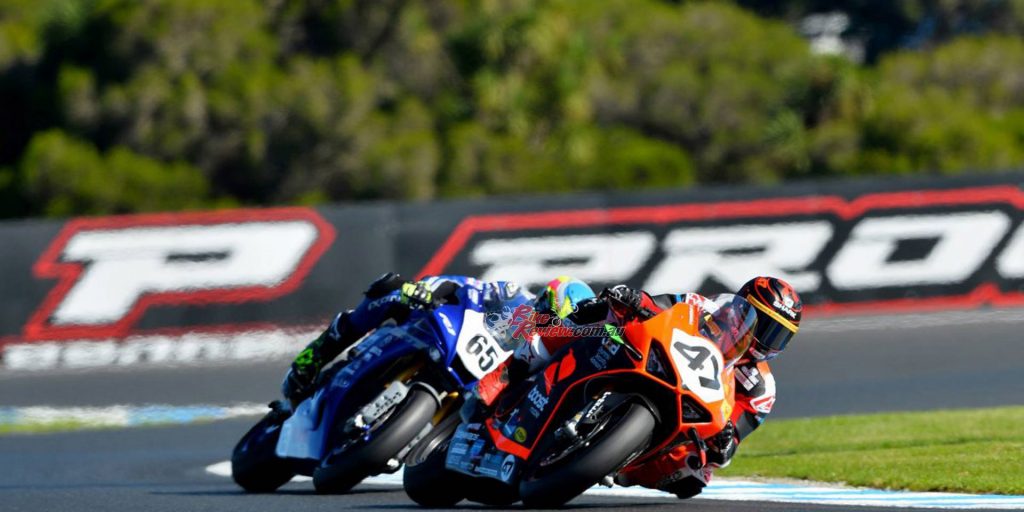 In response to the unfolding COVID-19 situation, many motorcycling events around the world have either had their events cancelled, postponed or modified. The Australian government has advised that events with an attendance of over 500 people should not go ahead, which is most motoring events around the country.

Motorcycling Australia released a press release stating that certain events may still move forward, where they involve fewer then the recommended number of people for mass gatherings or may be run without spectators. However, much uncertainty remains surrounding the situation at this point in time.

Motorcycling Australia has provided us with a table that shows the status for upcoming events around Australia: Wakefield Park ASBK and The Bend ASBK are cancelled as of today. 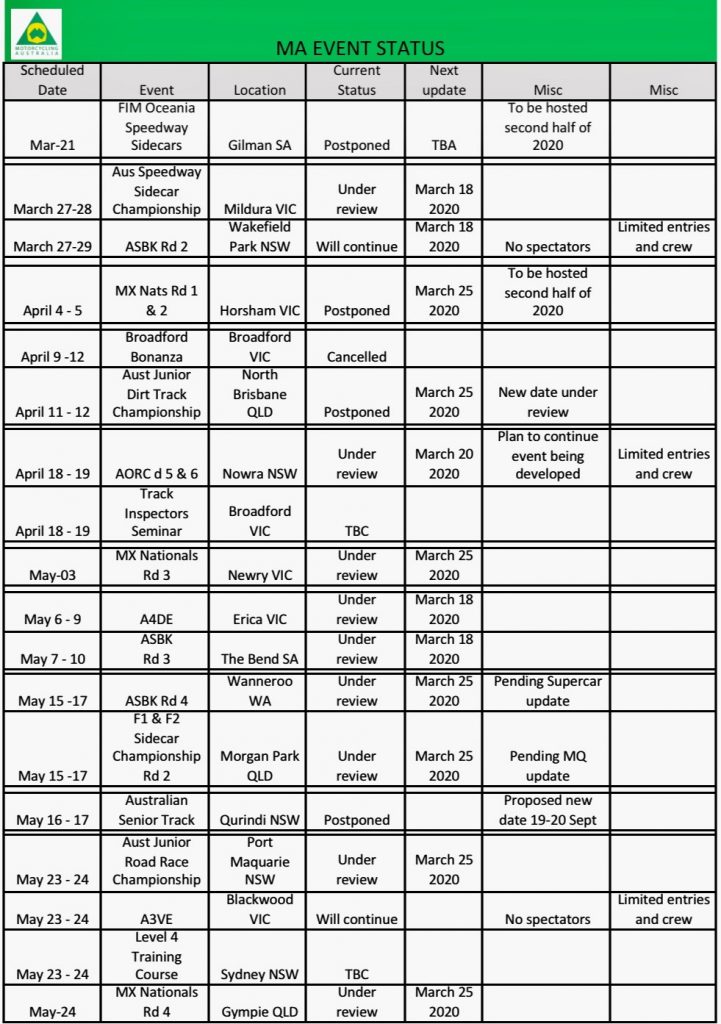 Please note that as of 18/03/20, Rounds Two at Wakefield Park and Three at The Bend of the ASBK has been cancelled due to COVID-19.

Here are some of the events around the world that have been canned, postponed or modified:

mi-bike Motorcycle Insurance Australian Superbike Championship presented by Motul
Round two of the ASBK at Wakefield Park Raceway on March the 27th to the 29th has officially been cancelled as of this morning. Further restriction recommended by the Australian Government and imposed by the NSW Government have now made it impossible for the event to continue.

Heavy travel restrictions have made it difficult for riders, teams and officials to travel to the event, and health services have become too limited for the event. Up until this point, the event was supposed to move forward without spectators and restricted to race officials, competitors and limited support personnel. 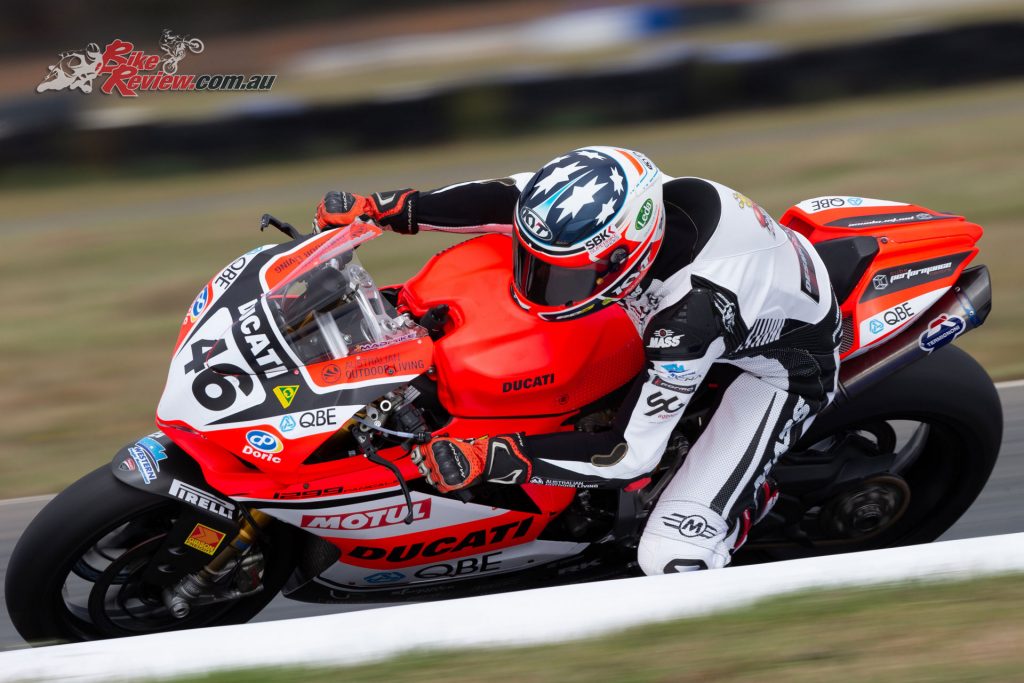 Round Two of the ASBK at Wakefield Park was cancelled this morning due to heavy travel restrictions and limited health services.

Motorcycling Australian CEO, Peter Doyle commented on the postponing of the round two event, ‘’The developments of COVID-19 have changed each day over the last week and in some cases, they have changed hour by hour. The situation of last weekend is now very different as is the situation as of Monday. This is a tough call for the ASBK Management Team to make, but given the significances of the global health crisis this is the right decision to be made. We choose to make this decision now rather than the day before the race.’’

For further information about these changes and upcoming ASBK events, please visit the ASBK website.

Festival of Speed
It was announced on Monday, the 16th of March, that the 2020 Festival of Speed, that was to be held on the 20th to the 22nd of March at Sydney Motorsport Park, has been cancelled. This comes after heavy government restrictions of mass gatherings of people, with many events limited to only 500 attendees.

The PRCA committee will make announcements regarding refunds, etc. via their Facebook page. 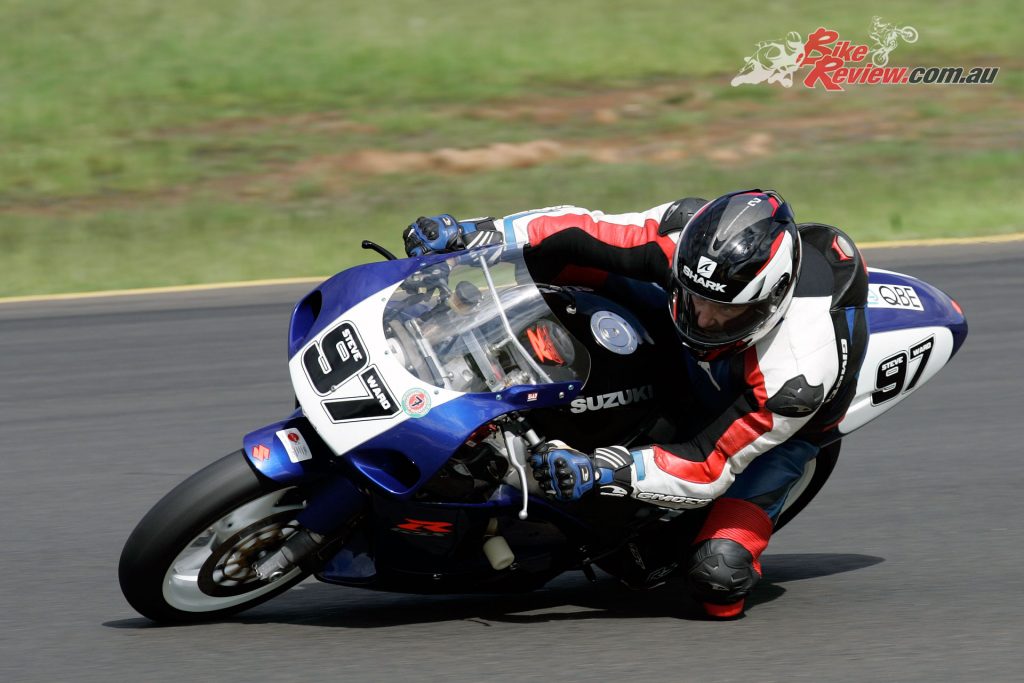 The 2020 Festival of Speed at Sydney Motorsport Park was cancelled by the PRCA on Monday.

MotoGP
The calendar for the 2020 MotoGP season has been modified with events being postponed until November amid the coronavirus situation. The changes includes the addition of new dates for the OR Thailand Grand Prix, Americas GP, Argentina GP and Valencia GP, as well as the premier class now kicking off their season at the beginning of May. 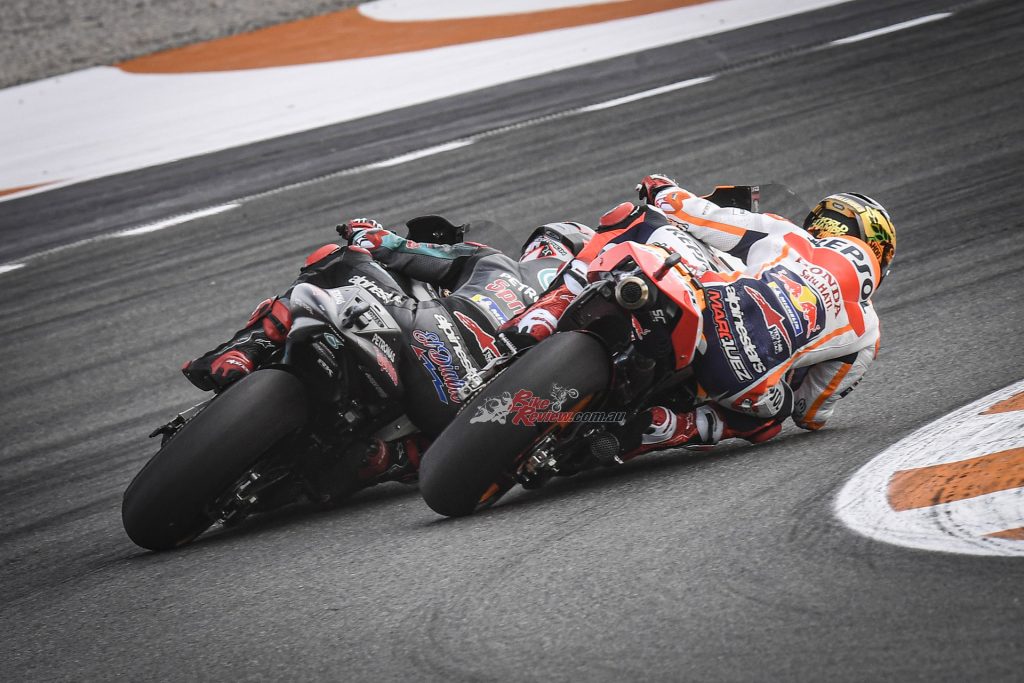 Amid the unfolding COVID-19 situation, the calendar for the 2020 MotoGP season has been revised with various races pushed back.

Motul FIM Superbike World Championship
Round two of the WSBK at Losail International Circuit, Qatar has been postponed due to the growing COVID-19 situation. Changes have been made to the 2020 calendar that see dates for the Spanish Round and French Round moved to the 23rd-25th of October and 2nd-4th of October respectively. 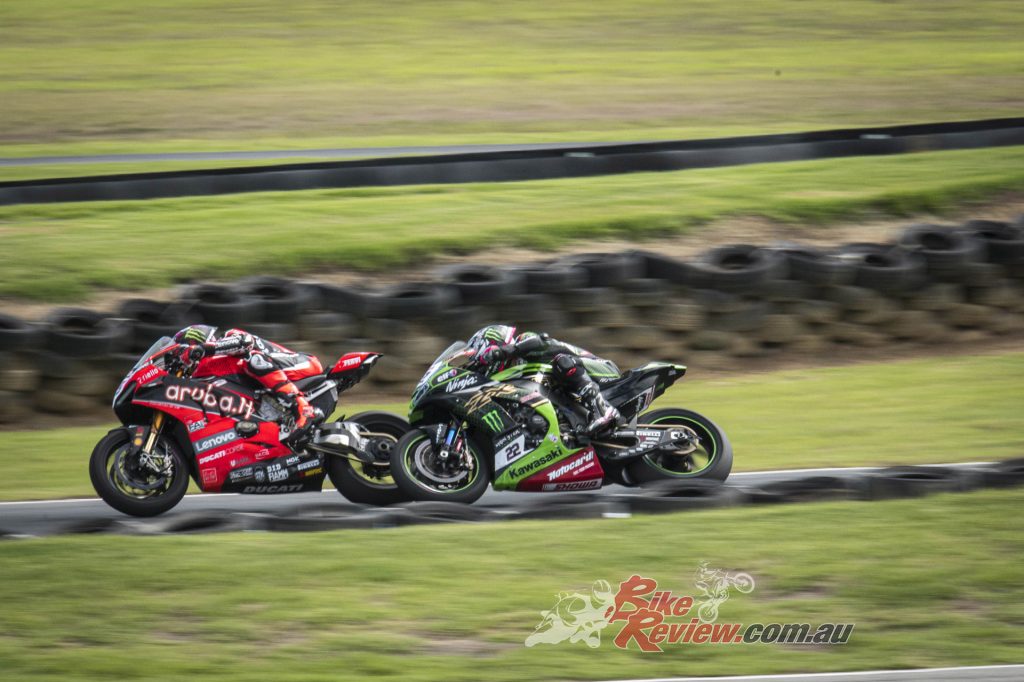 Both the French and Spanish Rounds have been pushed back further with both rounds now happening in October.

The Department’s Motorsport Team is however pushing for the successful delivery of the 2020 Classic TT Races and Manx GP which is due to begin on the 22nd of August. 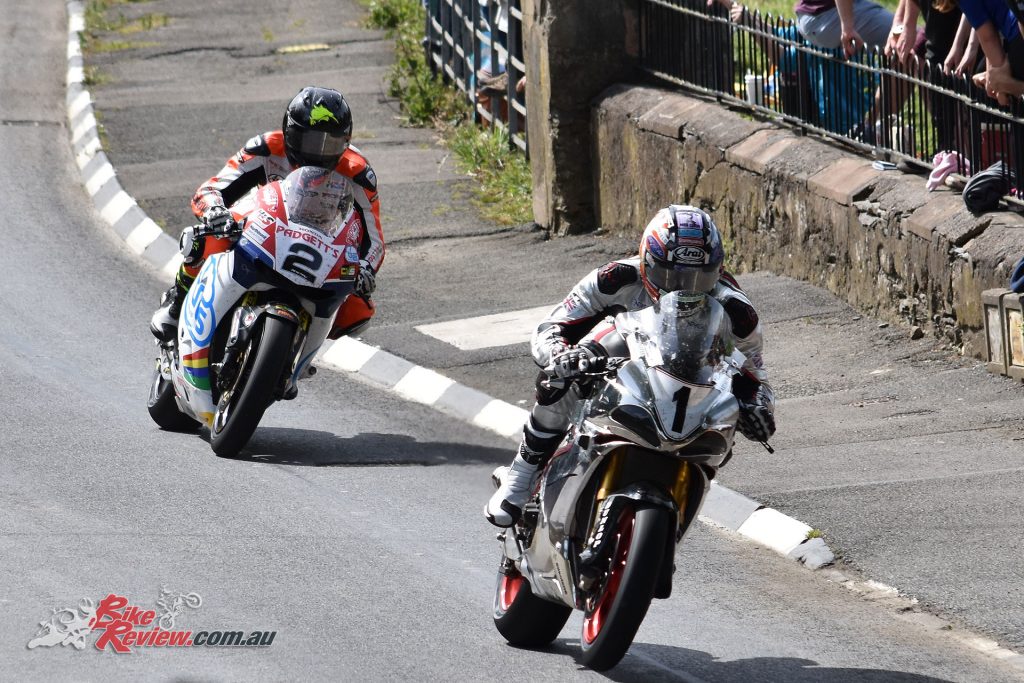 The 2020 Isle of Man TT has been cancelled by the Isle of Man Government to protect its population from the pandemic. 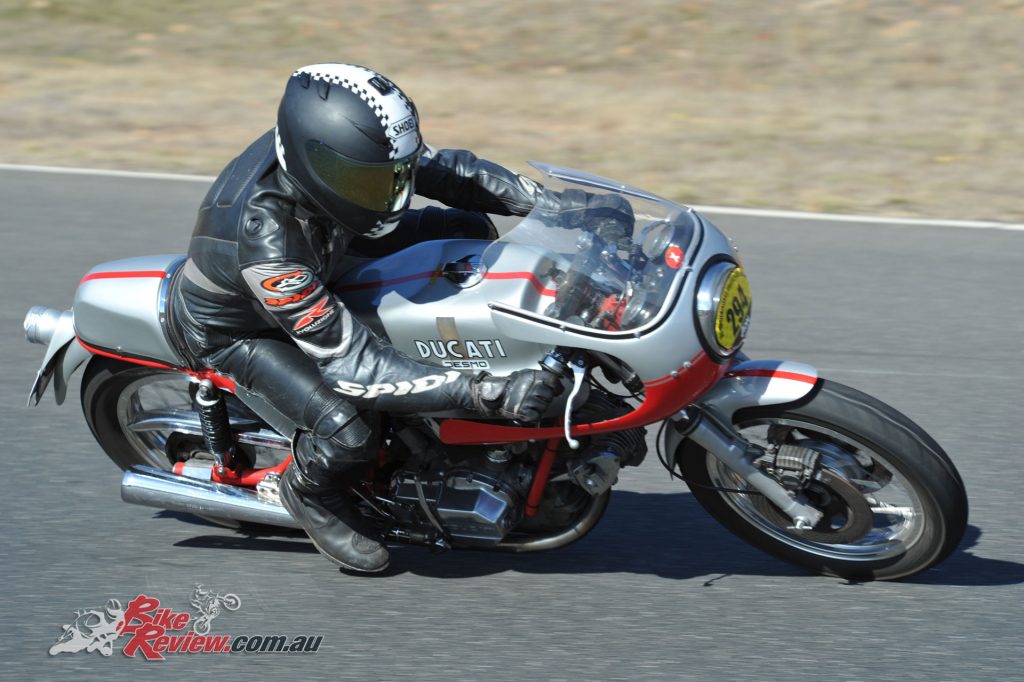 Another Australian motorcycling event has been cancelled due to the growing COVID-19 pandemic effecting the world.

Make sure to check back for frequent updates on motorcycle events happening both around Australia and overseas.