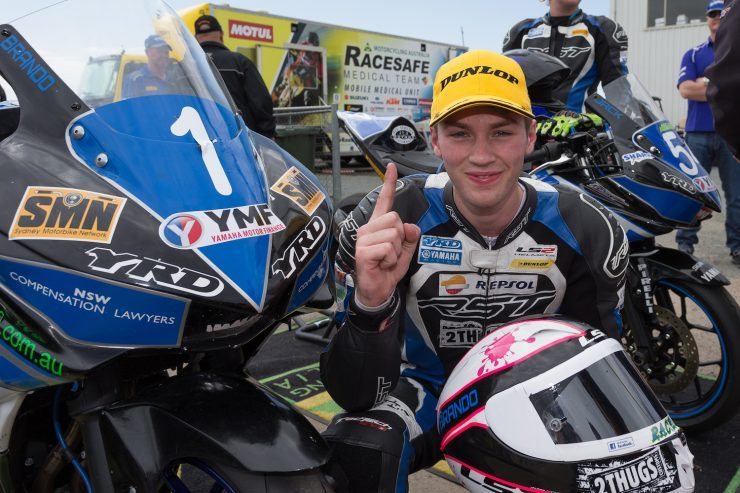 2016 Championships were awarded to Drew Sells, Brandon Demmery and Brian Houghton in the Akrapovic Production and Honda Moto 3/125 GP classes after three action packed races, at the deciding round of the Yamaha Motor Finance Australian Superbike Championship presented by Motul Pirelli at Winton Motor Raceway today.

Despite challenging weather over the past two days, the Akrapovic Production class were treated to sunny conditions, and a dry 18-degree track temperature for their second race of the weekend today.

It was Cube Racing’s Tom Toparis aboard his Kawasaki who once again got the jump off the start and made his way straight in to the race lead, but after securing the race one victory on track yesterday, Ipone supported Reid Battye was not prepared to let Toparis out of his sight, and by lap two, had moved in to the lead position.

With five laps remaining on track, Battye continued to lead but only by .148 of a second, while Toparis back in second had begun to feel the pressure from YRD’s Callum Alderson in third. But with this weekend marking the final round, and with all important championship points up for grabs, the attention soon shifted back to the lead, with Battye and Toparis switching positions multiple times, keeping the crowds well and truly entertained.

In the final laps, the top five riders bunched up, which inadvertently created plenty of drama. With Battye under pressure in second position, the number 33 rider made a crucial mistake which took himself and Alderson out of second and third, and saw the pair run off the track, resuming in spots well outside the top ten.

With two well placed riders eliminated from the lead pack, Up to 300cc rider Toparis was able to breeze to victory in the eight lap second race. Second position in the Up to 300 category was taken by Bikebiz’s Sam Condon, while Race Centre’s Drew Sellls took third in the class (6th in the race).

With third in the race, 2 Thugs Custom’s Brandon Demmery took the win in the Over 300cc class, while Aidan Hayes and Jack Dawes finished in fourth and fifth places respectively.

With two Production class championships set to be awarded after the chequered flag in the final race, riders made sure they left nothing on the track in the last Akrapovic Production class race of the year. When bikes left the grid, much like race one with only one lap in the books, Kawasaki mounted Toparis was in the lead ahead of Condon and Battye.

After only three rotations on track, the top three riders began to put on a show, proving that the final race would go down to the wire. In only 200 metres, Battye made a ripper move from third all the way up to first position relegating Toparis and Condon to second and third.

After a shocking first race, YRD’s Alderson managed to maintain fourth position for the majority of the race, while JDR Racing’s Jack Dawes remained in fifth.

As riders headed in to their final lap of the weekend, Toparis had snatched back the lead from Battye, and both riders were determined to fight all the way to the finish line, but despite every effort from Battye to make something happen, Toparis was just too good, eventually collecting the chequered flag with the final Up to 300cc race victory.

Second place in the Up to 300cc Production class was secured by Battye, followed by Condon in third.

Despite finishing fourth in the race, YRD’s Alderson crossed the finish line with the Over 300cc race win followed by Dawes and Hayes in second (5th) and third (6th) positions respectively.

But at the conclusion of today it was Race Centre’s Drew Sells who secured the Akrapovic Up to 300cc class championship on a total of 303 points, while Toparis’s consistency paid off, finishing the season as the runner up. Bikebiz’s Condon completed the Up to 300cc podium in third.

Thankfully for 2 Thugs Customs’ Demmery, despite finishing seventh in the final race of the year, his form throughout the season saw him awarded with the Over 300cc class Championship, while Alderson wrapped up 2016 in second overall and Hayes finished in third.

“I am speechless! It’s an amazing feeling. This round we have just been conservative to try and keep that thirty-three-point championship lead,” he shared.

“We missed out by three points in that second race, so I knew I just had to sit back and watch all the action unfold. So I did that ,rode conservative, and this is just an amazing feeling.

“I can’t put it in to proper words, I am so thankful for everyone who helped me out this year, it’s been an amazing year and hopefully we can get a few more Australian titles in the future,” he concluded. 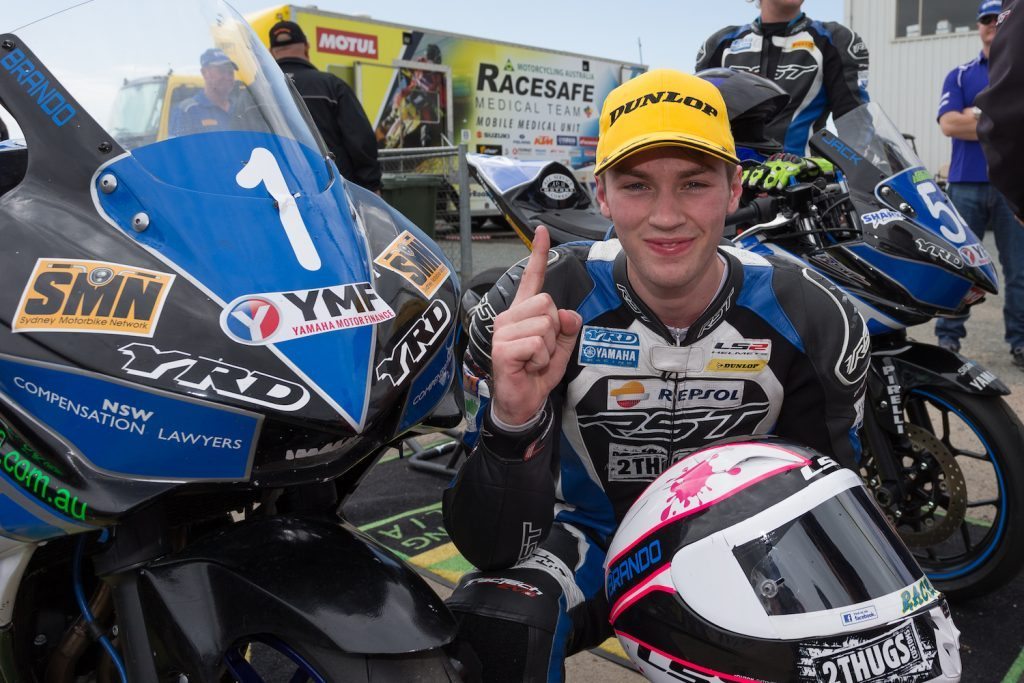 “The last race was pretty nerve wracking. I went in to it with the mentality that I just finish it. I got an average start, and just let Callum go – let him run his own race,” Demmery shared.

“I just went out there and did what I had to do, and slowly was able to pick off the guys in front of me. I am pretty happy, and I just have to thank the crew that made it happen this year, my mechanic Chris, my mum and dad. Yamaha especially for coming on board and making this really happen.

“My whole family are here to see it ,so we are pretty happy. It is back to business now, we didn’t win last year when I stepped up to the six hundreds, so it feels pretty good to come back and get a win and do what we have to do,” Demmery finished.

With Latters Conshift rider Brian Houghton starting the second Honda Moto3/125 GP race with the knowledge that a championship was just at his fingertips, when bikes hit the track, fans expected big things from the veteran of the class.

But after being disqualified from race one yesterday, it was Aussie Crane Trucks’ Dylan Whiteside who showed impeccable form throughout his second outing on track, and by the three lap mark in the race Whiteside was a comfortable 2.669 seconds clear of Houghton in second, followed by LTR Racing’s Locky Taylor and Tayla Relph in third and fourth.

Despite the youngster of the class Taylor closing in on Houghton throughout the later stages of the race, it was exactly in those positions that the Honda Moto 3 competitors finished. Whiteside collected his first win of the weekend ahead of Houghton in second, while Taylor and Relph finished in third and fourth.

Despite not being in contention for the championship, Whiteside captured the attention of the spectators in race three, and when bikes headed to the grid for the third and final time, all eyes were on his Honda machine.

And it was no surprise to see Whiteside demand control of the race after only one lap, allowing the battle for championships to happen behind him.

Surprisingly, points leader Houghton trailed Whiteside, Relph and Taylor by a huge 11 seconds by the three lap mark, and then as racing progressed the gap just got greater and greater.

With both Whiteside out in front, and Houghton out the back, Relph and Taylor kept the crowds entertained with their battle for second position – the pair determined to leave nothing on the track as they fought for not only a podium in the race, but second in the championship.

But unfortunately their fight on track ended prematurely with Taylor crashing in turn 10, marking the end to his day at Winton. And the drama did not stop there, only two laps later Relph suffered a mechanical problem which also forced her out of the final race of the day.

With only two riders left on the circuit, Whiteside was handed a clear track to take his second race victory of the weekend, while Houghton crossed the line in a very comfortable second position.

And with that result in the final race, Houghton secured the Honda Moto3/125GP Championship by an outstanding 36 points. 15-year-old Taylor finished his 2016 season as the runner up, while Relph finished in third overall on 284 points.

“Today has bought the year to some sort of satisfaction about it. I have had such an up and down year on the bike,” he shared.

“I intended at the start of the year to have the championship wrapped up by now, but a few mechanical gremlins and one big crash and all you can put it down to is racing.

“To be honest the biggest kick I have got out of this year, although the entries have been a lot lower than last year is the likes of the young guys, getting to know me and have all liked riding with me – that has been as good as winning to me,” he finished.

For a complete list of results from today, head to www.computime.com.au

Akrapovic Production Over 300 Round 6 results:

Akrapovic Production Up to 300 Round 6 results:

Akrapovic Production Up to 300 Championship: