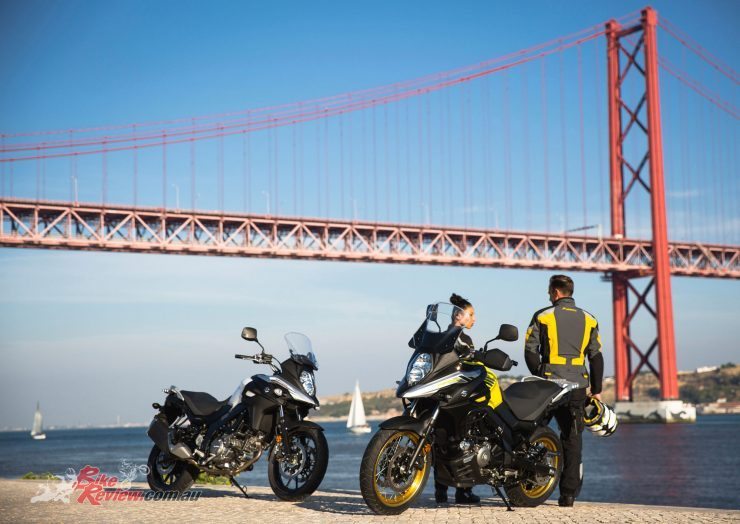 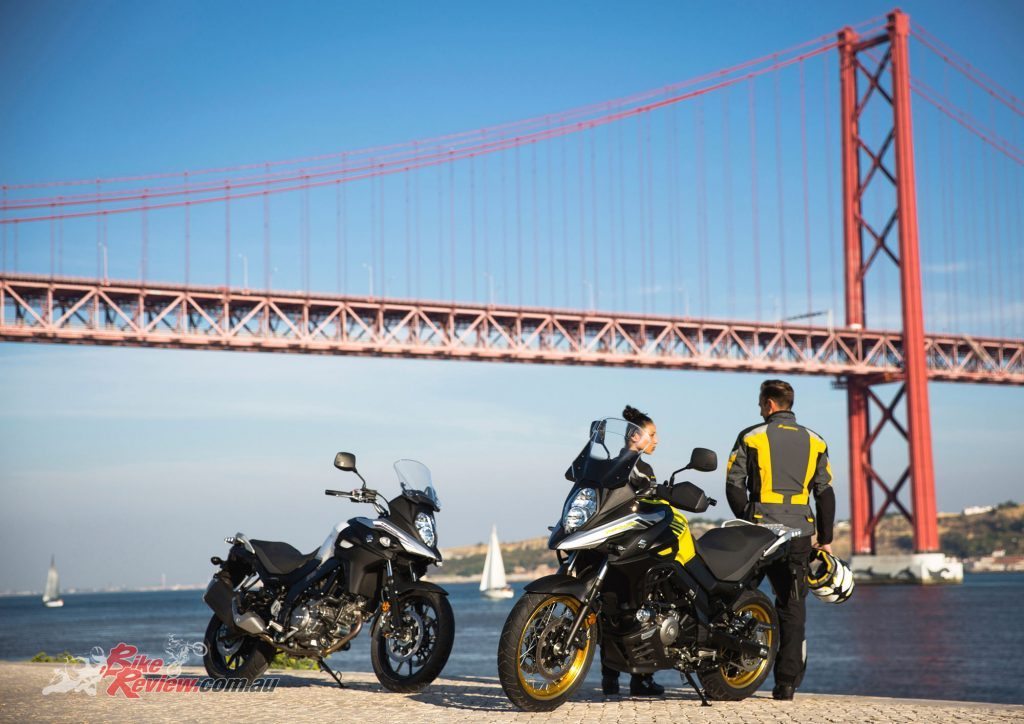 A worldwide hit and becoming a best seller in its class since its introduction in 2004, the V-Strom 650 is widely regarded as the benchmark for the middleweight adventure market. The MY17 iterations are lighter, more advanced and more powerful than ever before.

The 645cm3 DOHC V-twin is a masterpiece of Suzuki engineering. For MY17 the updated powerplant has been tuned for stronger low to mid-range torque for practical use while maintaining its exhilarating top-end.

The new engine now meets Euro4 emission standards with the help of new technology such as the resin-coated pistons, and by revising over 60 internal components resulting in a higher output whilst keeping the unique V-twin character.

With low fuel consumption combined with the large 20L fuel tank, the riding rage between fuel stops are at the top in this class, relieving the rider from the stresses of frequent refuelling. 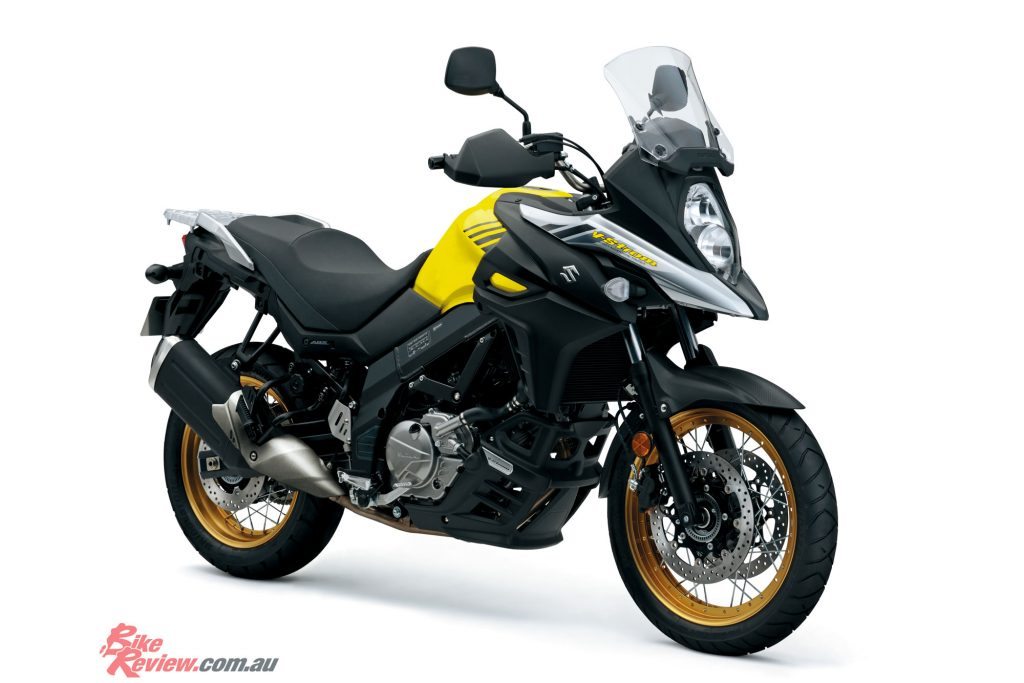 For MY17 the V-Strom 650 range inherits the highly praised traction control system from the V-Strom 1000. This system continuously monitors the front and rear wheel speeds, throttle position, crank position, and gear position with various sensors, and controls the engine output by managing the ignition timing and air delivery.

The traction control system can be switched to either of two modes, or off. The modes differ in terms of sensitivity. Mode one allows modest rear wheel spin for more advanced, exhilarating riding, while mode two activates traction control at the slightest loss of rear-wheel grip giving the rider greater confidence on slippery surfaces or challenging conditions. 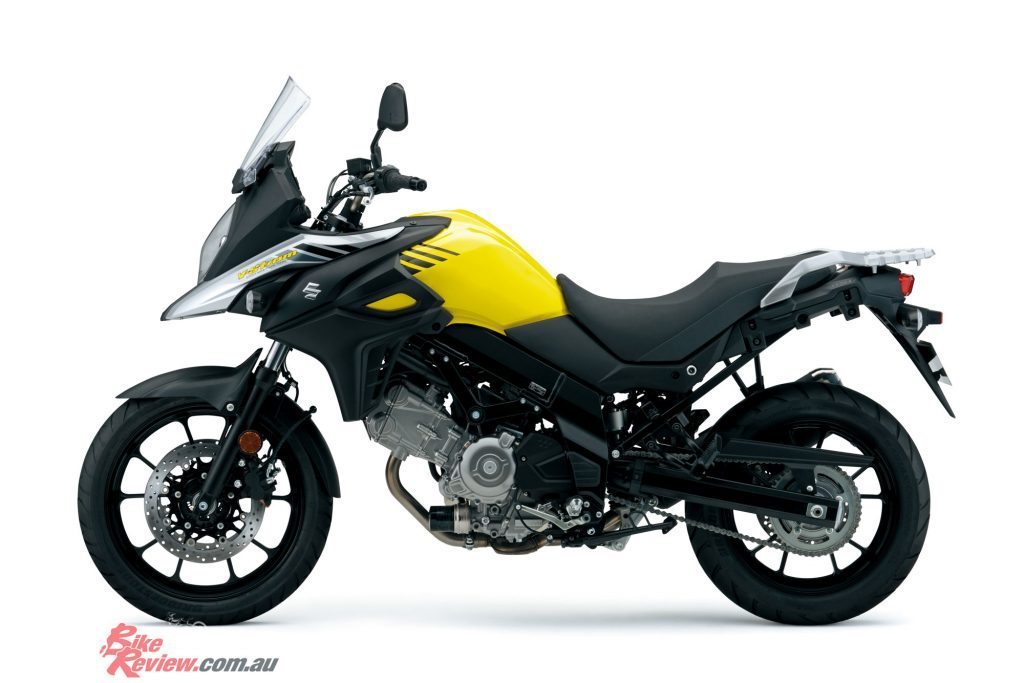 The iconic DR-BIG was the first Adventure model to have feature the “Beak” front cowl styling, in recent years the V-Strom brand has been inspired by that distinctive look. Both 650 models now sport the updated beak design featuring a more direct line from the tip of the beak to the top of the fuel tank.

The windscreen design has also been updated with similar styling to that seen on its bigger sibling, the V-Strom 1000. The screen is 9mm taller than previous and features three adjustable height positions. Developed through extensive wind-tunnel testing and providing a comfortable well-protected area, reducing wind buffering and turbulence. 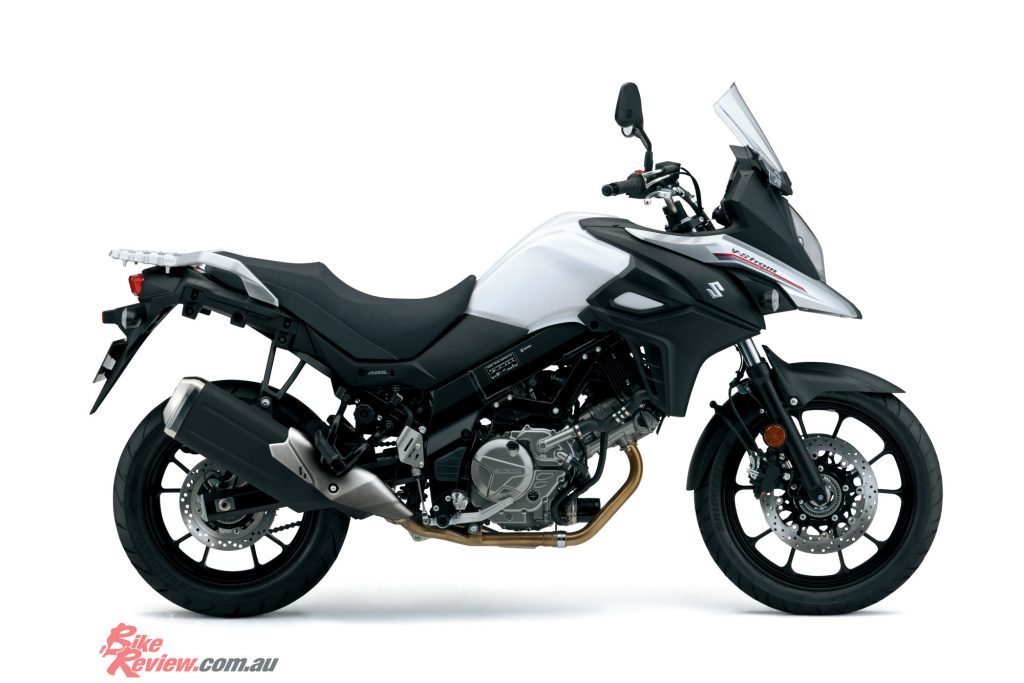 The new V-Strom 650’s retain the lightweight and rigid aluminium twin spar frame and swingarm from the previous iteration. Compared to the steel frames used by competitor models, the lightweight frame offers superior rigidity and balance providing steady handling and manoeuvrability whilst keeping the chassis slim enabling the rider to easily reach the ground. 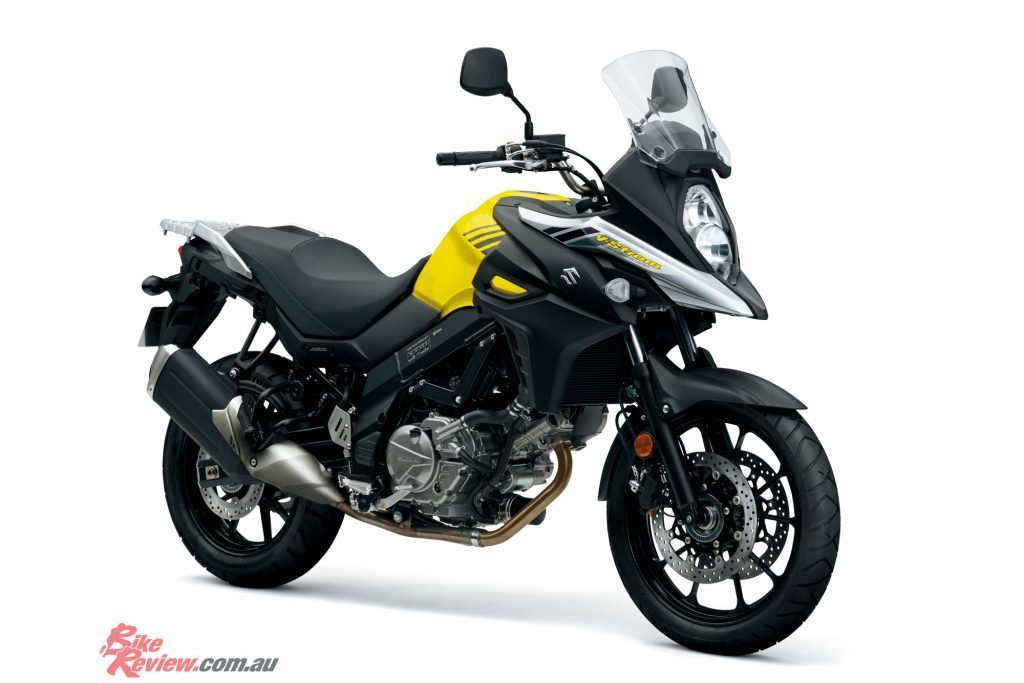 The redesigned slimmer and smarter fuel tank still holds a capacity of 20L, by eliminating the plastic covers on both sides of the tank from the previous model, the tank has become slimmer and is now able to accommodate magnetically attachable tank bags.

The frame covers which were positioned directly underneath the seat on the previous model have been slimmed down as well, allowing the rider to reach straight down to the ground, resulting in better access to the ground and increased rider confidence.

An ever important feature on an adventure touring motorcycle is a comfortable seat, the V-Strom 650’s updated seat design works in unison with the updated cowling and will continue living up to its reputation for being an ultra-comfortable touring machine. Also the highly praised tandem area parallel with the rear carrier remains providing a large flat space to securely strap large baggage when needed. 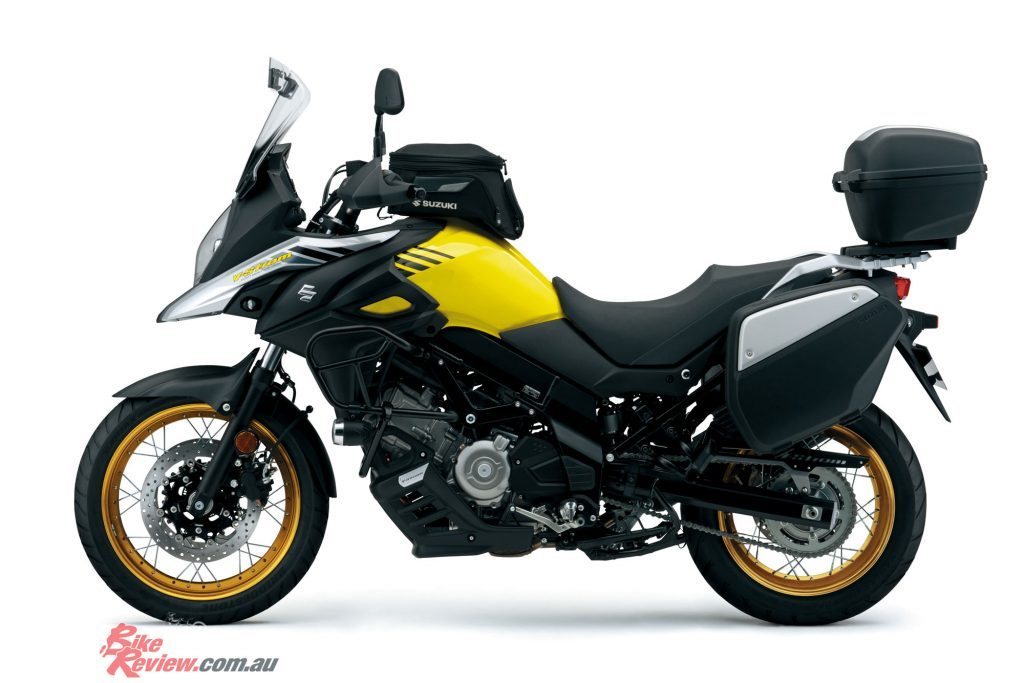 Equipped with 310mm twin discs with twin piston calipers on the front and a 260mm single disk with a single piston caliper on the rear, the V-Strom 650’s provide controllable and dependable stopping performance.

Also the compact and light-weight Anti-lock Brake System (ABS) has been upgraded to the next generation unit with advanced settings for a more natural feel and secure activation.

Both models are shod with Bridgestone Battlax Adventure A40 tyres, specially developed for the V-Strom 650. 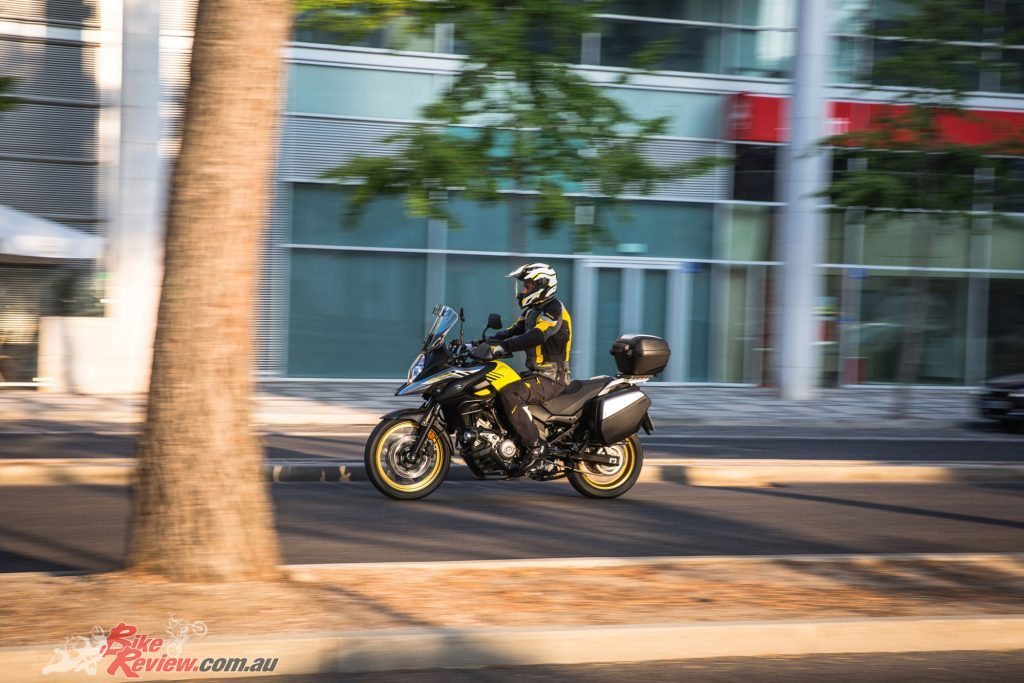 Previously only unique to the Australian spec models, the MY17 V-Strom 650XT globally will come equipped with hand guards and protective engine cowling to support harsh riding conditions.

The remaining fuel range continues to display after the fuel gauge shows empty, offering the rider with accurate and comforting information.

The new instrument cluster permits the addition of a 12V DC outlet positioned directly below the instruments as standard equipment, supporting the rider for the use of GPS units and/or recharging of mobile devices.

By adopting the new Low RPM assist system, the chances of an unexpected engine stall have been minimised. This system will automatically raise the idle speed when engaging the clutch or when riding at low rpms, assisting frequent clutch work in congested traffic and preventing sudden and unexpected engine stalling when operating in the low rpm range.

The Suzuki Easy Start System enables engine starting at one push of the button. A computerised ECM checks the status and engages the starter motor immediately after activating the switch, making the engine starting process even easier for the rider. 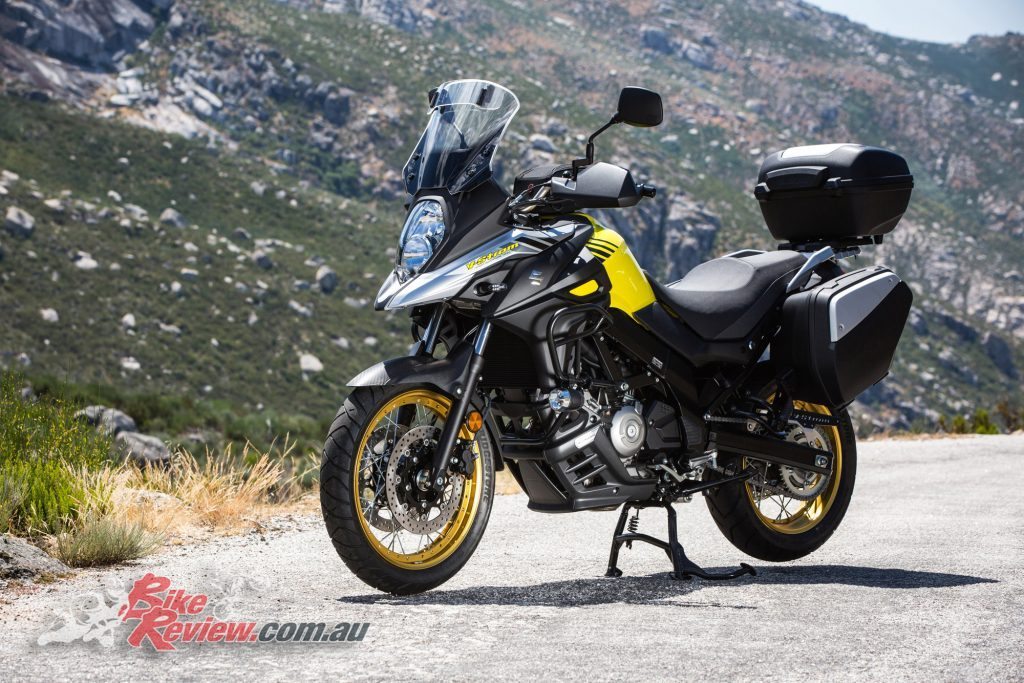 The MY17 V-Strom 650 and V-Strom 650XT are expected to arrive in Australia during the second quarter of 2017 with final specifications, colours and pricing being confirmed closer to launch.