The Australian Moto3/125 GP category were the first bikes to hit the track Sunday, launching a huge day of racing for Round 1 of the Yamaha Motor Finance Australian Superbike Championship presented by Motul Pirelli.

With the Moto3/125 GP field treating spectators to a head to head battle between Honda mounted Brian Houghton and Suus Customs rider Matt Barton, anticipation for the race was high.

When the bike roared off the grid, all eyes focussed on the front row, with Barton in pole position, looking to finish Round One of the ASBK on the top step.

With one lap in the books it was Queenslander Locky Taylor who took the early race lead, followed by Barton and Houghton respectively.

It wasn’t long however before Barton slipped by Taylor and took control of the race, leaving Taylor and Houghton to fight it out for second position.

The pair battled hard on to the tail of Barton, maintaining pressure on the race leader for the top spot.

It was youngster Taylor who carried his fighting momentum in to the race lead, with Houghton hot on his tail, passing Barton, who was relegated to third position.

By lap eight the lead group had hit a back marker, making the fight for the final Moto3/125 GP race win all the more challenging – with Houghton taking advantage and moving in to the race lead in the closing stages with Barton and Taylor following in second and third behind him.

In the final lap Barton, determined for the race to go down to the wire, moved in to the race lead, only for both Houghton and Barton to crash . Both were able to continue, with Barton out of contention, while Houghton was able to claw back a third position.

Taylor and Edwards capitalised on Barton and Houghton’s misfortunes, with 14-year-old super star Taylor taking the Moto3/125 GP Race Three win, ahead of Edwards in second.

Taylor was over the moon after his first race win, sharing that he wanted to show the field that despite his age, he’s here for business, “I was just kind of lurking at the start to see what lines they were taking and how fast they were going and then I was trying my heart out to try and stick with them,” Taylor said after the race.

“It was a good race, Tommy Edwards got on the inside of me and last corner, I just held it nailed and tried to slip stream it down the straight and luckily got him. I’m real happy with the race.

“I’d like to thank mum and dad and my sponsors, Voit Contracting and Tas Earth Moving. The other competitors are real strong on the brakes and I just thought, ‘I’ve got to be aggressive and stick it up the inside,’ so I know I can do this!”

Once points were tallied from the three Moto3/125 GP Races, it was Houghton who narrowly took the round win from Taylor. “To be able to take the round win is excellent! The glass is definitely half full today,” Houghton said.

“I am quiet happy with that last race, it was unfortunate that I dropped it, I would have like to have challenged Locky (Taylor) more, but he just shot off.

“The conditions were perfect actually the bike wasn’t sliding around, the only reason why I fell off is because I just went a bit hot into MG corner. Fortunately I managed to keep the bike running, just jumped back on motocross style and off we went.” 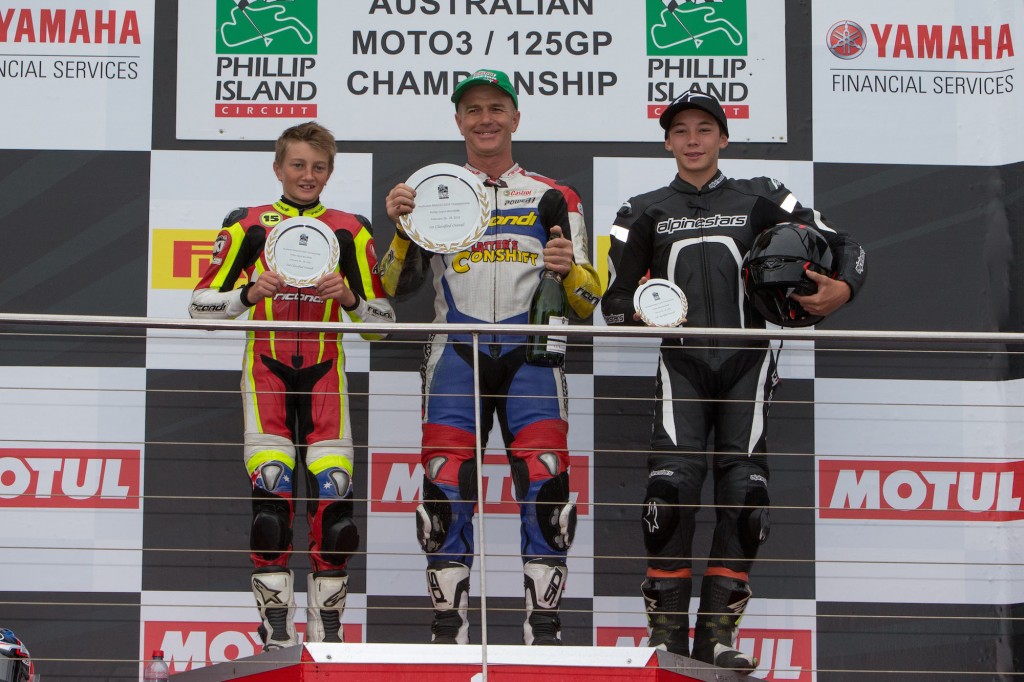