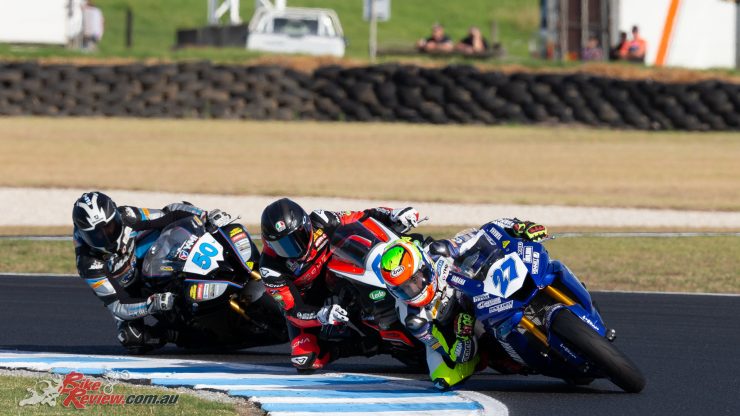 Tom Toparis (Landbridge Yamaha YZF-R6) was the first rider to stamp his authority on the 2019 Motul Pirelli Australian Superbike Championship (ASBK)’s Supersport class with a commanding win Race 1 for Round 1 at Phillip Island Circuit.

Toparis began the race on pole position ahead of Liminton, with Spriggs completing the front row. A delayed start saw race distance reduced to nine laps, but once the race got underway it was Toparis with the holeshot as Spriggs moved into second. 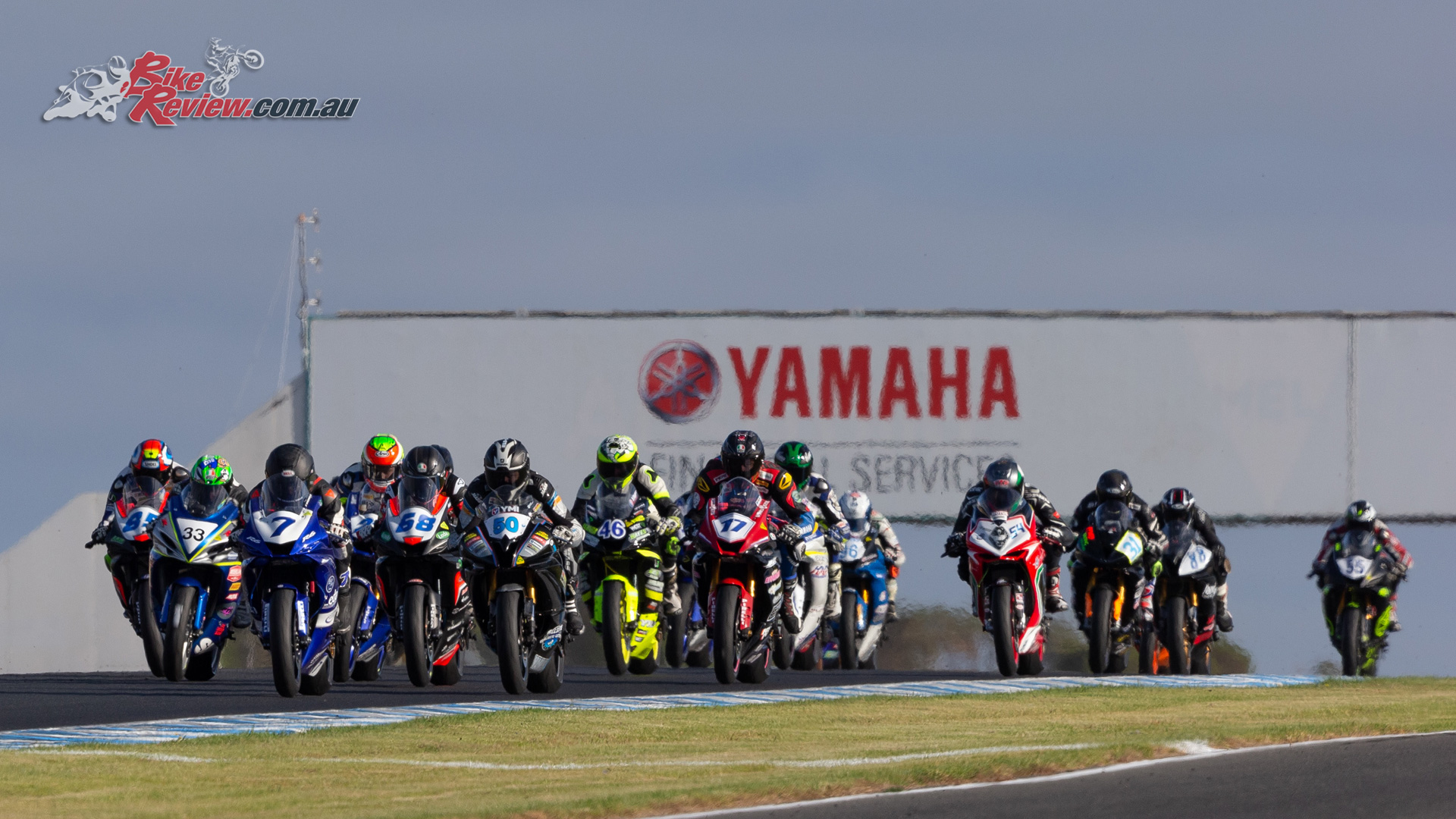 Oli Bayliss (Cube Racing Yamaha YZF-R6) was the big winner from the race start, sliding into third in his debut race in the Supersport category as Liminton dropped to fifth. At the end of lap 1 it was Toparis from Bayliss and Liminton, who had recovered to pinch third off Spriggs.

By lap two Toparis was already almost a second and a half ahead of Bayliss, Spriggs, and Liminton who made up the three-man battle for second spot.

Ty Lynch (Australian Outdoor Living, Yamaha YZF-R6) managed to tack his way onto the leading group by quarter distance, having worked his way up from ninth on the grid.

With four laps to go Liminton, having passed Spriggs earlier, managed to find his way past Oli Bayliss for second. The battle for third raged on through the race between Spriggs, Broc Pearson (Yamaha YZF-R6), and Lynch.

Spriggs would go on to claim the last spot on the podium in a nail-biting finish, with Bayliss only 3 thousandths of a second back in fourth and Pearson overtaking Lynch on the last lap to finish fifth. 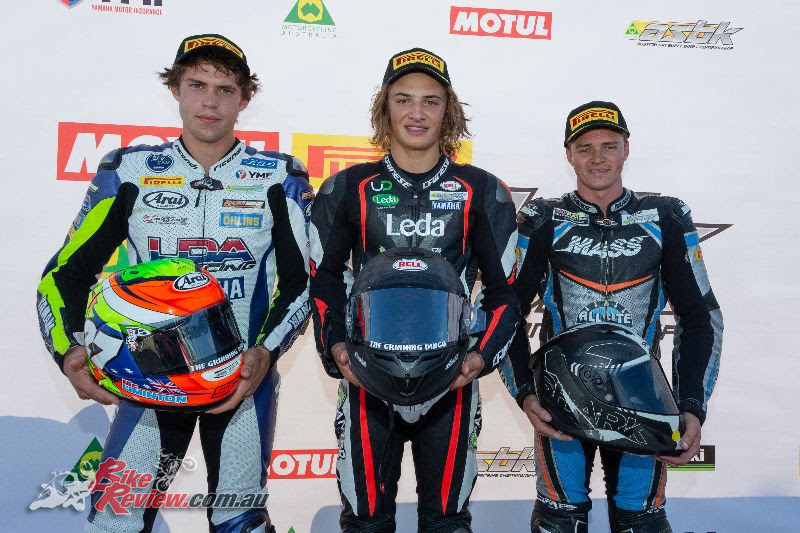 In the end though nobody could touch Toparis, finishing more than five seconds ahead of the rest of the field. Toparis was happy with his performance this morning, quietly confident of his chances for the remaining races, “I’m glad to start the season off with a win” he said, “and hopefully it’s going to be a good weekend.”

Liminton was delighted with his second place, an excellent finish despite an injury, “I tore my shoulder yesterday and it’s been a big pain on the bike so I’m happy to even be in the top 3. I couldn’t be happier.”

Third-placed Callum Spriggs was full of praise for his opponents, especially Supersport debutant Oli Bayliss. “It was fun battling with Oli and Nic, I think Oli’s going to be a good young rider” he said. “I think it’s going to be a fun weekend racing against each other so I’m looking forward to it.”

Race 2 saw Tom Toparis (Landbridge Yamaha YZF-R6) has once again show he’ll be very hard to beat for the remainder of the 2019 Motul Pirelli Australian Superbike Championship (ASBK), taking another Supersport win at Phillip Island Circuit, to make it two for the day.

South Australia’s Nic Liminton (Yamaha Motor Aust. Yamaha YZF-R6) had the holeshot off the grid, however by the end of the first lap things started looking much as they had during the first race with Toparis checking out at the front of the field. 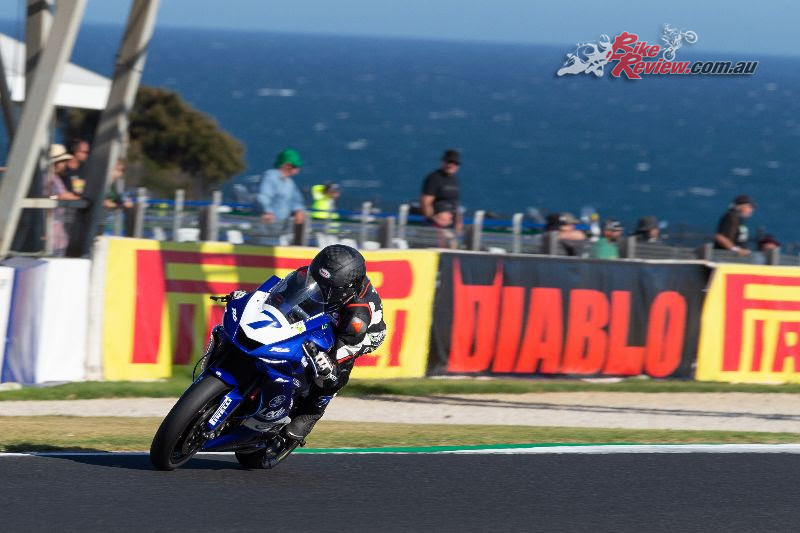 On lap four Sam Lambert (MV Augusta Paramatta) brought the MV Augusta F3 into the pitlane to retire from the race after starting the race from seventh. Aidan Hayes (Hayes Johnston Pty. Ltd. Yamaha YZF-R6) pushed his way into the top five at the expense of Lynch, who sliddown to fifth and Battye to sixth.

At the halfway mark it was Toparis four seconds up on the rest of the field, ahead of Liminton, Bayliss, Pearson, Battye and Lynch. By the chequered flag the result was much the same, save for Reid Battye who dropped back through the field to bring the Suzuki home in seventh position.

Toparis was pleased to take his second win of the day, “That’s what this weekend’s about, starting off the season strongly and so far, it’s gone to plan” he said. “There’s still some things we want to do to go a little bit faster if we can. Going to do the best we can tomorrow morning and then a big afternoon with the World Supersport race and we’ll see how we go.”

Liminton was thrilled with a superb second place. “So happy to finish on the podium again, that race was definitely harder, it was very windy. The new Yamaha’s working perfectly so hopefully we can just do the same thing tomorrow. A bit closer to Tom and I’ll be happy!”

Bayliss rounded out the podium in third. “It was a really hectic race, the wind was really strong” said Bayliss. “After a little problem going down the straight I lost Nic so I didn’t really have anyone to chase. But from then I kept consistent and managed to get third.”