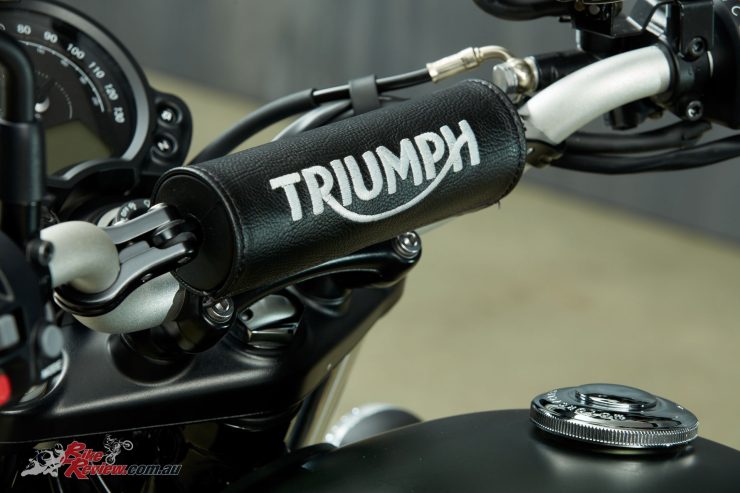 This will be accompanied by a landmark moment for Triumph and the MX and Enduro racing world with a Triumph factory race program, and a commitment to top-tier championship racing in both Motocross and Enduro series.

Coming hand-in-hand with this commitment to race and win at the highest level in the sport, Triumph is proud to announce that global Motocross legend Ricky Carmichael and five-times Enduro World Champion Iván Cervantes have joined the Triumph family as active partners in both bike testing and preparation for racing.

An announcement of the timetable for the launch and reveal of the motorcycles as well as the racing program and the full story on the product advantages the new Triumph MX and Enduro offer will follow in the coming months.

Nick Bloor, CEO Triumph Motorcycles Ltd, “Today’s announcement marks the beginning of a new chapter for the Triumph brand, which everyone at Triumph is incredibly excited to be part of. We are 100 per cent committed to making a long-lasting impact in this highly competitive and demanding world, with a single-minded ambition to deliver a winning motorcycle line-up for a whole new generation of Triumph riders.” 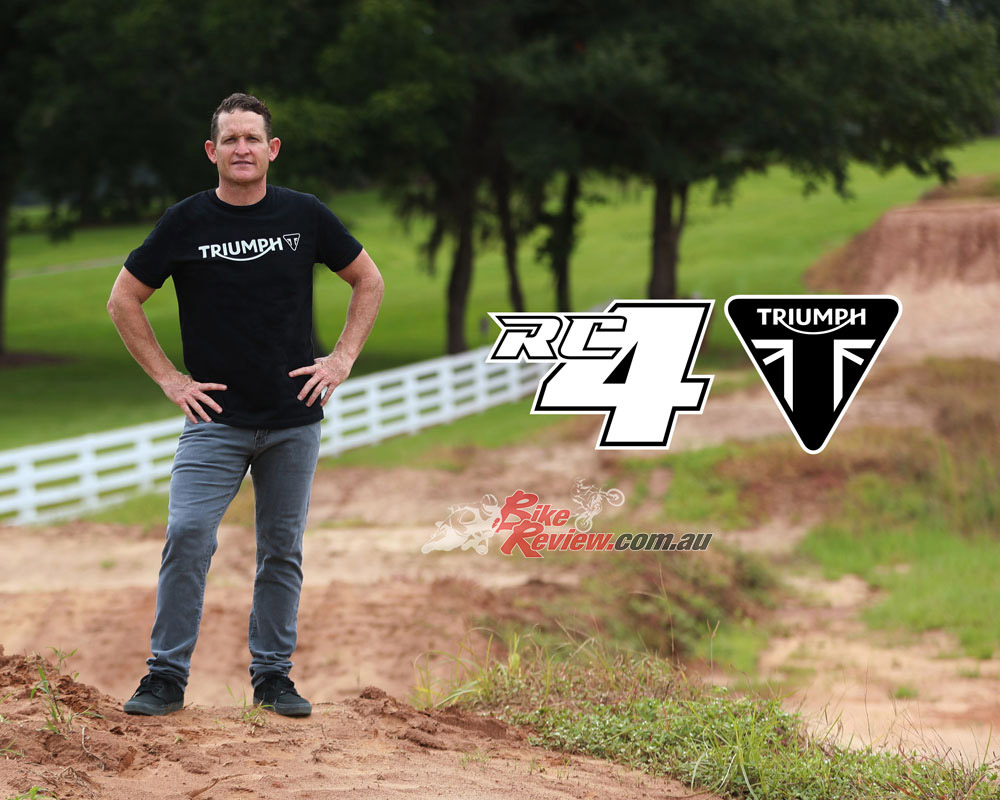 Ricky Carmichael is the greatest motocross racer of all time.

Ricky Carmichael, The G.O.A.T, “I’m thrilled to announce that I’m joining the Triumph family and even more excited to be a part of their new endeavour into the off-road product category. This is an incredible opportunity for me to join this historic brand, and I’m honoured and humbled to be a part of the development and release of Triumph’s off-road motorcycles.

“Building something from the ground up is something that really is intriguing to me at this stage of my career. What is impressive to me is Triumph’s dedication and passion to develop a top-of-the-class product. Everyone who I have been involved with in this project, from the engineers, design groups, R&D department, has shown extreme passion for what they’re doing, and that’s a recipe for success and something that I love being a part of. We all share that same passion, and that’s to be the best.

“If you’re familiar with the Triumph brand, you already know the quality of craftsmanship is top-shelf, and the off-road models will follow suit to their past! Not only are these exciting times for me, but it’s an exciting time for the off-road industry to be adding another brand to the mix and the opportunities that lie ahead for all off-road consumers. I can’t wait to see the reactions when these models hit the dealer’s showroom floors.” 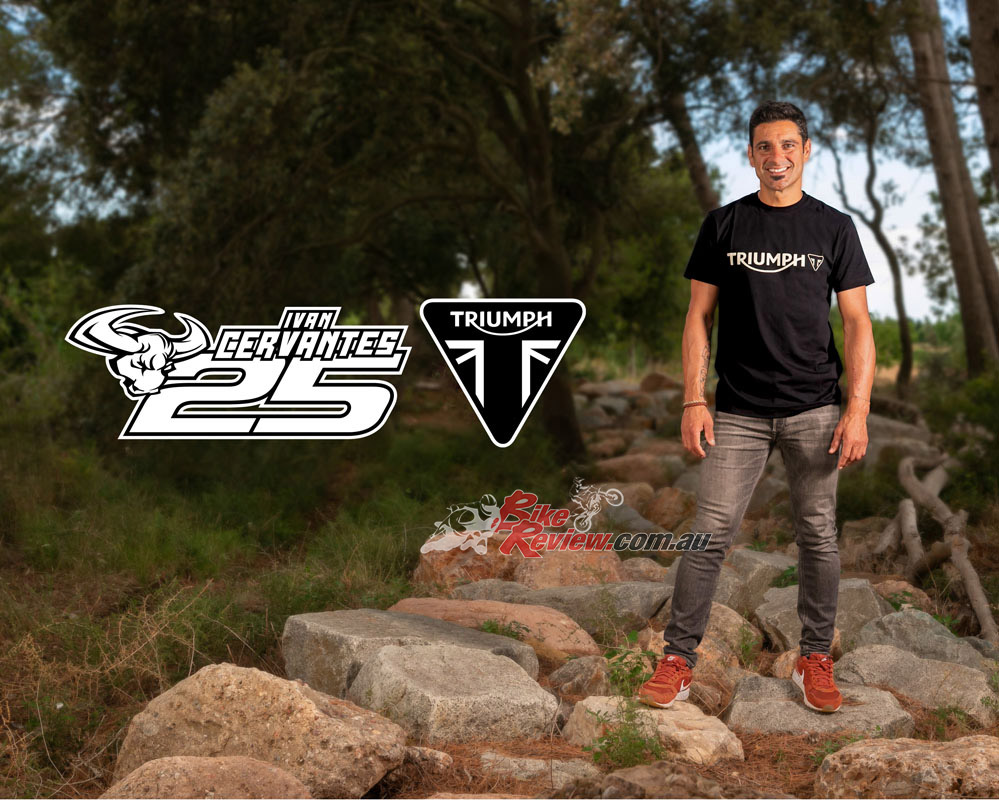 Five-times World Champion Iván Cervantes’ is one of the absolute greatest off-road racers of all-time.

Iván Cervantes, ‘El Torito’, “I’ve loved Triumph motorcycles since I was a small kid, seeing them in films and on television. So to be working with Triumph from the beginning of this project is an amazing opportunity for me – not just because it’s working with one of the world’s greatest motorcycle brands, but also for being part of building something from zero. It’s a dream come true for any racer!

“Like me, everyone I’m working with at Triumph is focussed to make the bikes the best they can be. I cannot wait to see the bikes competing at a world level, but I also look forward to when I can stand in a Triumph dealer and know I was part of this very special project.”

Paul Chiodo, Managing Director Triumph Motorcycles Australia, “Triumph has a rich heritage in off-road motorcycling that harks right back to its roots. The confirmation that this beloved British brand is entering the off-road market is hugely exciting for Triumph enthusiasts across Australia and, through our network of passionate dealers, we look forward to welcoming them. This is going to be huge.”

Since retirement from professional-level racing, Carmichael has remained heavily involved in the sport he loves, from owning a championship-winning team, designing tracks for the Daytona Supercross, running Ricky Carmichael University, commentating on the Monster Energy AMA Supercross as well as working with Triumph as part of this exciting development in his sport.

Iván Cervantes – ‘El Torito’
Five-times World Champion Iván Cervantes’ racing career began in motocross, where the Spaniard won five national titles before moving to enduro in 2002. At the age of 23, Cervantes made history by becoming the first Spanish champion in the EnduroGP E1 category. ‘El Torito’, or ‘The Bull’, followed this with a further three world championship titles in EnduroGP and an FIM Indoor Enduro World Cup championship title. In 2008 Cervantes became Spain’s first and only overall winner, in the 83rd Edition of the International Six Day Enduro.

Cervantes then turned to the Dakar for his next challenge, where he competed three times and twice completed what is arguably the toughest motorcycle race in the world.

After his retirement from professional racing, Cervantes began his work with the Real Federación Motociclista Española, as the Sport Manager of Enduro in Spain. In this role, Cervantes is the Manager of the Spanish Junior Enduro Team and the track inspector for the Spanish National Enduro Championship. Cervantes’ focus on giving back to the sport that gave him so much sees the ‘El Torito’ joining Triumph for the once-in-a-lifetime opportunity working on an all-new off-road project.