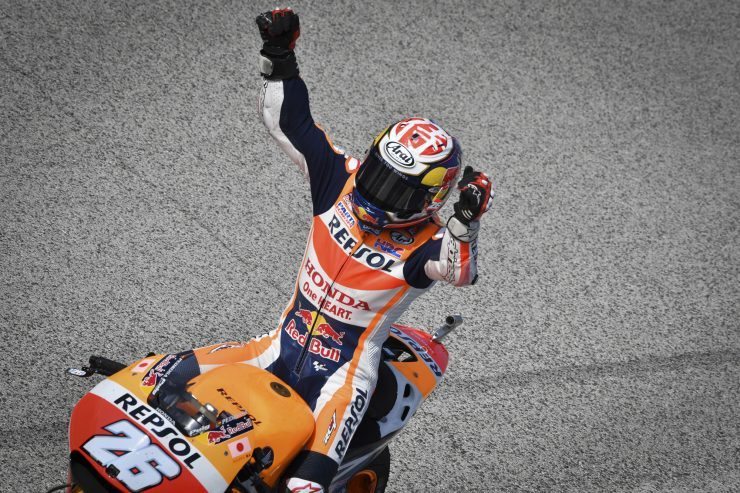 The Repsol Honda rider becomes eighth different winner in 2016 after an unbelievable charge through the field.

History can be an easy thing to remake when the cards fall right. In 2016, MotoGP has now rewritten it – but it’s been nothing but easy for those who have penned their own chapters in the season that has now seen the most different winners in a single year since the dawn of the world championship in 1949.

Chapter eight was written at Misano World Circuit Marco Simoncelli and it was Repsol Honda rider Dani Pedrosa holding the pen. Pedrosa took his 29th premier class win and 103rd podium at the Italian track as he fought back up from a tough qualifying position on the third row, and in doing so kept his fantastic record of a race win in every year of his MotoGP career in tact. 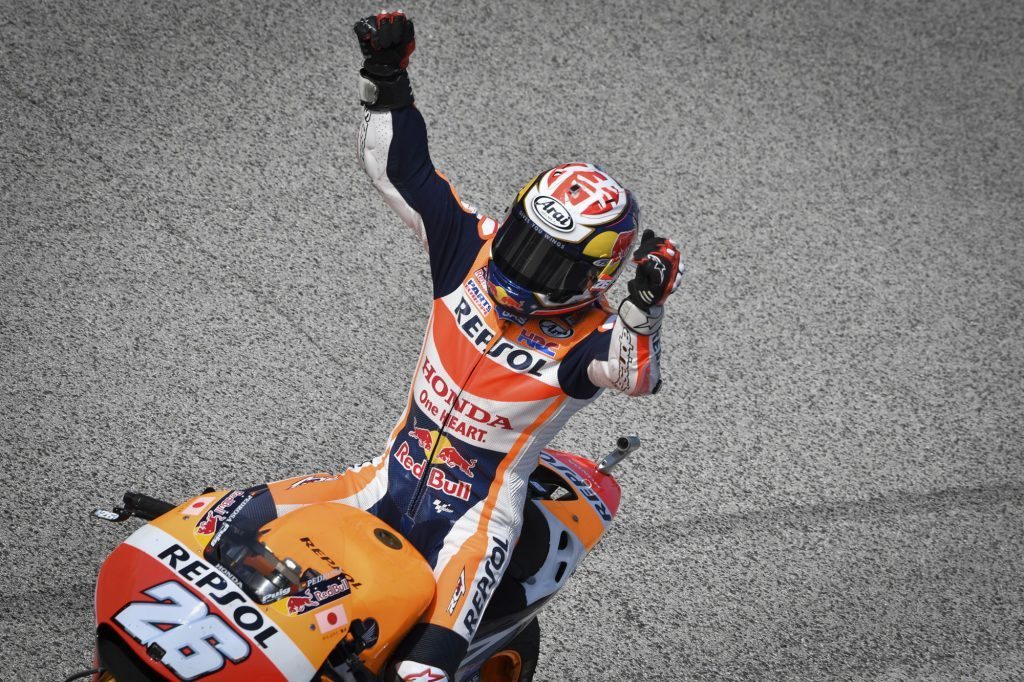 After a tough season and then a corner turned at the post-race test in Brno, the ‘Baby Samurai’ returned to the top step in spectacular style, taking first teammate Marc Marquez, then the Movistar Yamahas of Jorge Lorenzo and Valentino Rossi as he charged for the flag and crossed the line with a healthy margin – unstoppable and uncatchable in his race rhythm.

Lorenzo got the jump from pole, leading the field into Turn 1 as the Mallorcan so often does, with front row starters Rossi and Maverick Viñales (Team Suzuki Ecstar) going head-to-head for P2 and the Italian coming out on top.

Pedrosa got an incredible start from P8 to move him up into the front group, joining Viñales, Andrea Dovizioso (Ducati Team) and Marc Marquez (Repsol Honda Team) in the squabble for P3.

Rossi soon struck back to sit up teammate Lorenzo at the final corner and push the reigning champion wide, taking the lead and leaving Lorenzo and Marquez to chase him down – with Pedrosa the fastest man on track and setting a new lap record. Making a move against his teammate look easy and getting down into the 1:32s, Pedrosa was on the charge. 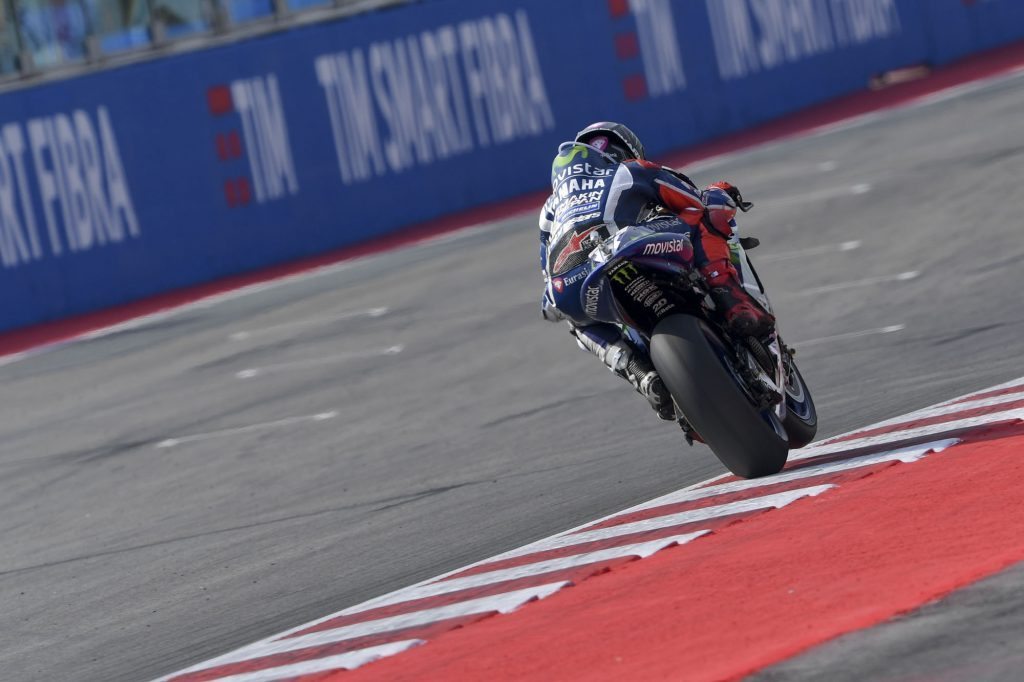 Setting his sights on Lorenzo and slicing through, the number 26 fixed his crosshairs on the race leader in Rossi’s backyard before passing the Italian with an aggressive move to sit him up and concentrating on making a gap at the front.

Untouchable and back with a bang, the incredible ride through from P8 was completed as the ‘Baby Samurai’ shook off a helpless Rossi to cross the line with a healthy margin, as history continues to be made with the eighth different winner in 2016.

Marquez suffered a tough race to head over the line in P4, but retains a healthy 43 point lead in the title as the paddock head back to Spanish soil. Viñales completed the top five, beating home rider Dovizioso and temporary teammate Michele Pirro (Ducati Team) to the honour. 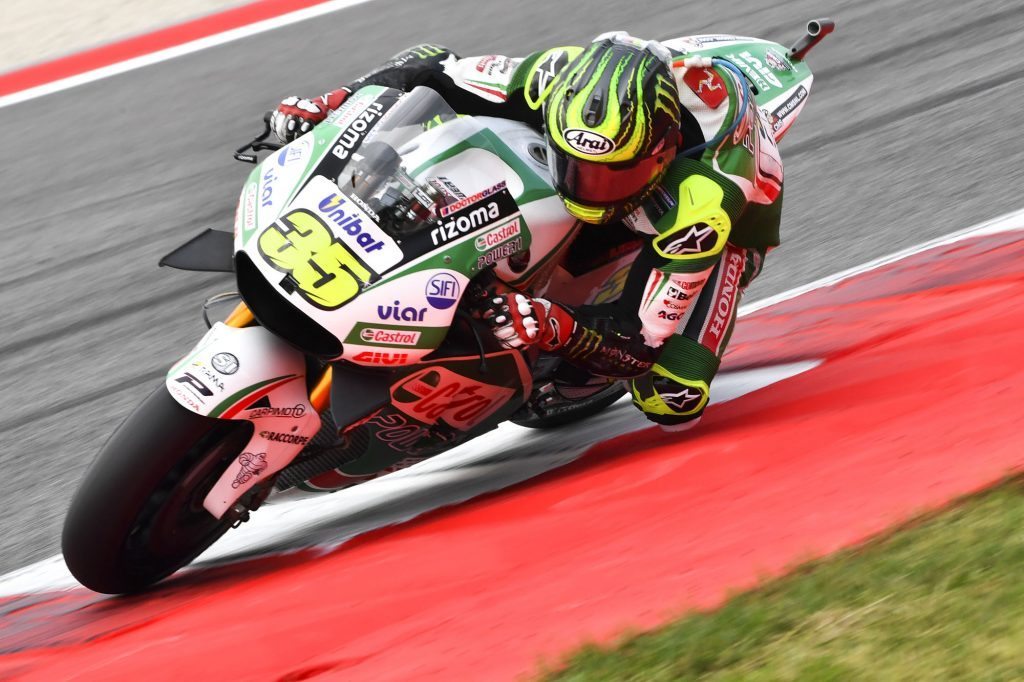 Cal Crutchlow (LCR Honda) had a solid ride to cross the line P8 ahead of Monster Yamaha Tech 3 rider Pol Espargaro, and it was a fantastic showing from Alvaro Bautista in Aprilia Racing Team Gresini’s home race as the Spaniard completed the top ten.

MotorLand Aragon now awaits: no longer enemy territory for Pedrosa, Marquez or Lorenzo as the flyways approach – and the season finale in Valencia gets ever closer. 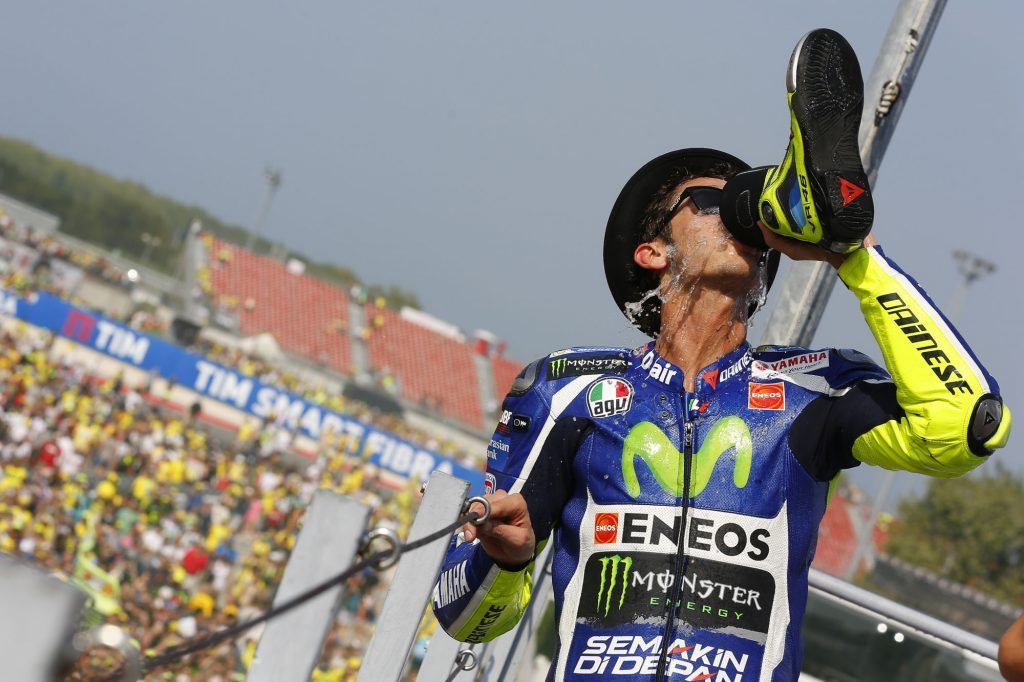 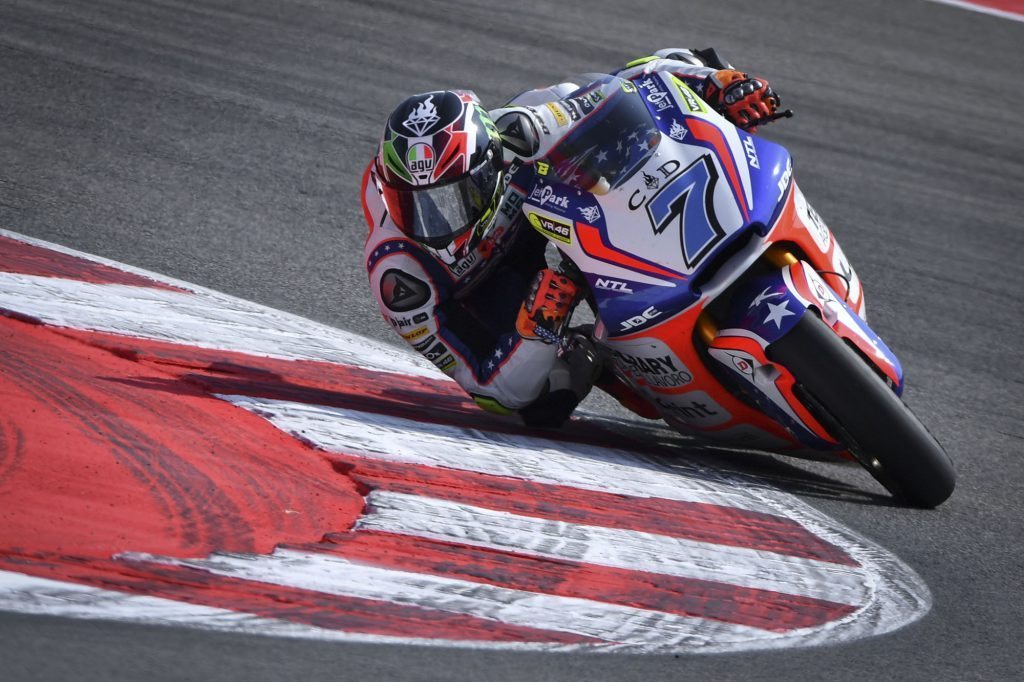 Lorenzo Baldassarri (Forward Racing) took a stunning win at Misano World Circuit in his first appearance on the top step, after a game of cat-and-mouse with Paginas Amarillas HP 40 title contender Alex Rins kept Misano on their feet.

After some chaotic early laps, Takaaki Nakagami (Idemitsu Honda Team Asia) completed the podium for his third rostrum in a row at the venue, as championship leader Johann Zarco (Ajo Motorsport) found himself knocked down to P4.

After a Moto3 race more tactical than the usual on-track dynamite, the baton was passed to Moto2 to switch things up a gear and the intermediate class did not disappoint. With fantastic Adriatic weather beaming down from the powder blue skies, Moto2 set up a thriller at Misano.

Zarco and Nakagami got the best starts from the front row, before the Japanese rider took Turn 1 too hot and then pushed Garage Plus Interwetten rider Tom Luthi wide over the run off area. With the Swiss rider rejoining easily, Nakagami then had a moment and found himself down in P8 by the end of the first lap.

Alex Rins (Paginas Amarillas HP 40) had an aggressive first lap to tag onto the back of the leaders, with Luthi just ahead of him on track and Baldassari and Franco Morbidelli (Estrella Galicia 0,0 Marc VDS) shadowing championship leader Zarco.

After a lap full of drama, the reigning champion then found himself wrestled down to P5 – with title rival Sam Lowes (Federal Oil Gresini Racing Moto2) right behind him on track. Lowes got past the Frenchman as the Ajo rider’s tough start of the race continued, with Zarco then finding himself down in P6 with Friday’s fastest Nakagami glued to his rear wheel – and soon past him.

With Rins able to break clear and Baldassarri following on the chase, the podium battle behind got brutal as Lowes, Morbidelli and Nakagami battled it out ahead of Luthi and Zarco. Pushing just a bit too hard with 13 laps to go, Lowes then lost it and found himself sliding out of the race – and possibly the title fight.

Nakagami broke free to chase the leaders down, with Rins out at the front but the pace starting to waiver for the Moto2 title contender. With a healing collarbone after a training accident ahead of the British GP, the Spaniard pushed to retain his advantage – one that would have seen him lead the championship on the way to his home track MotorLand Aragon – and tried to hold on in a superhuman effort.

In front of the home fans however, a healthy Baldassari gradually reeled in the Paginas Amarillas HP 40 rider ahead of him. Rins’s defense was incredible as the Spaniard pushed to keep up the pace despite the injury, but on the penultimate lap the Italian pounced.

Rins, who was left with the choice of play safe or fight back, still wouldn’t let him go and stuck to the Italian’s back wheel before trying a move on the final lap. With Baldassarri defensive and nearing the line for his impressive maiden win, Rins ran wide and settled for the P2 after his superhuman display.

Morbidelli crossed the line in P5, ahead of Silverstone winner Luthi. Petronas Raceline Malaysia rider Hafizh Syahrin had a solid ride to P7, just ahead of Intact Dynavolt GP duo Jonas Folger and Sandro Cortese. Alex Marquez (Estrella Galicia 0,0 Marc VDS) gained some more confidence back with another solid finish to round out the top ten.

With Lowes down, Zarco off the podium and Rins taking home a haul of 20 points, the championship gap at the top is now 3 points between the Frenchman and the Spaniard. Next up? Rins’ home turf as MotorLand Aragon beckons its local hero home. 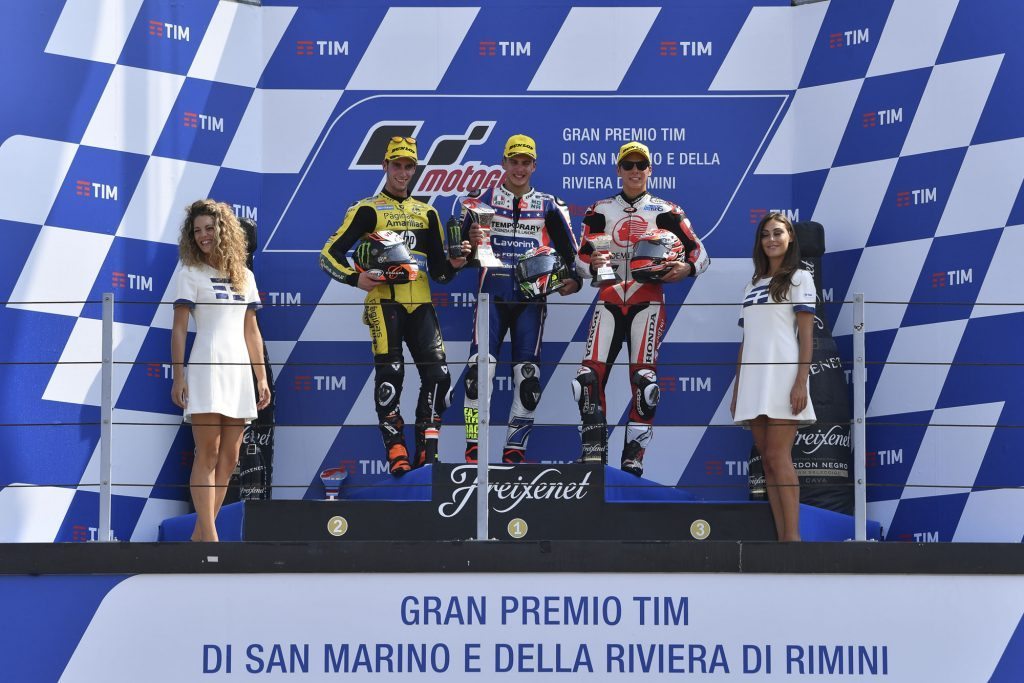 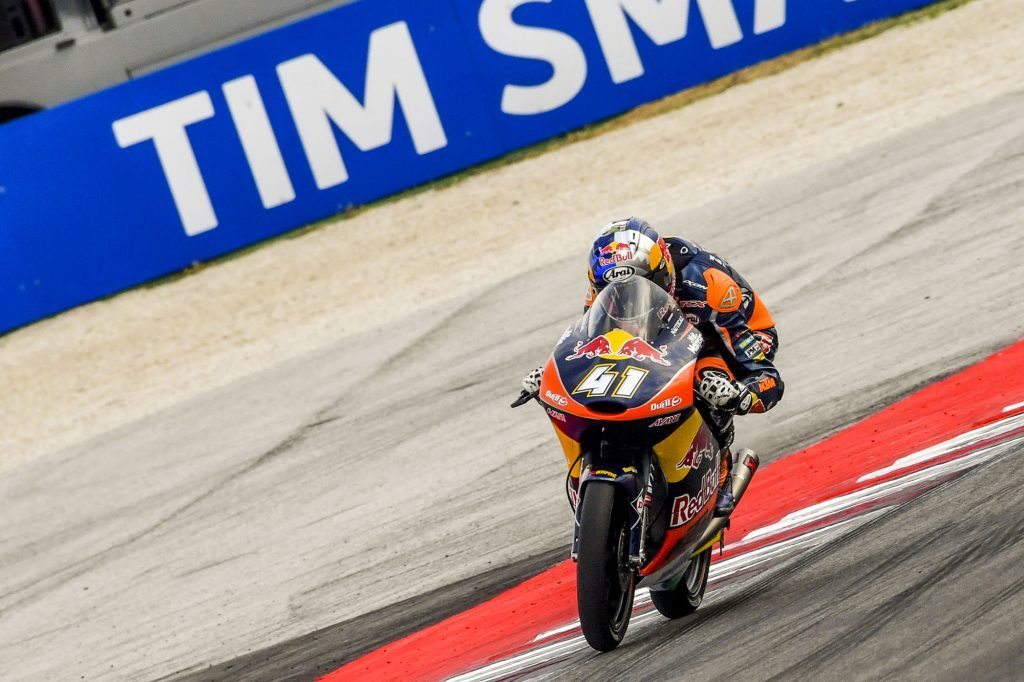 Binder and Bastianini duel it out in Misano

Clear blue was the view above Misano World Circuit Marco Simoncelli as Moto3 headed out on track to get down to business, and it was Friday pacesetter Enea Bastianini who got the best start and led through turn 1, with a great start from Row 2 for Jakub Kornfeil seeing him challenge polesitter Binder for second through Turn 2.

The South African hit back as Jorge Navarro (Estrella Galicia 0,0) and teammate Canet tagged onto the back of the front trio, with Nicolo Bulega (Sky Racing Team VR46) then beginning a fightback after losing positions off the line. Joan Mir, who started well outside the top ten, was another who made short work of the early laps as he sliced through the field to join the front freight train – part one of his stunning ride to the podium complete.

Binder then hit the front, with Bastianini getting tucked in to reel the championship leader back in, and the two opened a gap on the chasers as a crash saw Jorge Navarro out of contention when he lost the rear at Turn 14 – leaving his championship chances with another big dent.

With ten laps to go, the race was a story of two duels at the front – Binder vs Bastianini as fast-starting Mir wrestled with Bulega behind. With Mir then told to give a position back to Bulega after exceeding track limits, the Mallorcan timed it perfectly to then immediately take P3 back, staying ahead throughout the last lap to just pip his old FIM CEV Repsol rival to the podium.

Bastianini was ahead at the start of the last lap, having chosen to take back the lead a few laps before after a good number of laps stalking the championship leader, and the Italian stretched some daylight in between himself and Binder before the South African put in one final push to take the ‘Beast’ back. Bastianini hit the inside line in the final corner, but avoided last lap drama to not push too far and cross the line in a well earned P2.

The lead for winner Binder, after a DNF for Navarro and previous P3 title contender Francesco Bagnaia (Gaviota Mahindra Aspar) only crossing the line in P21, sees the South African now an almost-unbelievable margin clear at the top of the standings. Bastianini, for his stunning ride back onto the podium, took back P2 in the championship at his home GP.

Aragon now awaits, with the modern classic of a track waiting for Binder to try his luck with that almost-unseen chance: win the championship before the triple-header flyaways. With 106 points of advantage, Binder must only leave the Spanish track with a lead of more than 100 points to put both hands on the trophy. 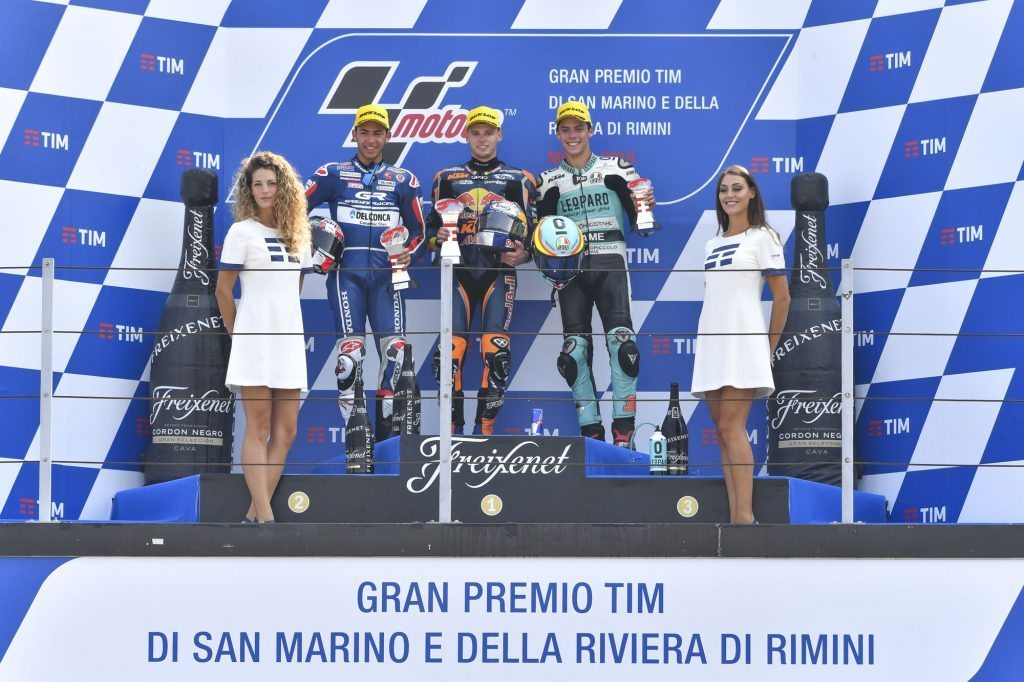