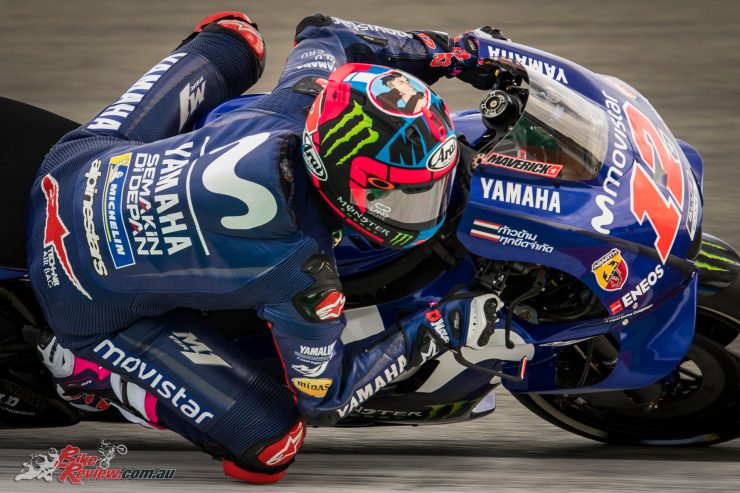 Maverick Viñales (Yamaha Factory Racing) got his 2019 preseason off to the perfect start after he topped both days at the Valencia Test, setting the quickest time of 1:30.757 to better second place Ducati Team’s Andrea Dovizioso by 0.133 and reigning Champion Marc Marquez (Repsol Honda Team) by 0.154 as the premier class riders completed a busy day of testing in Valencia; the rain staying away on Wednesday. 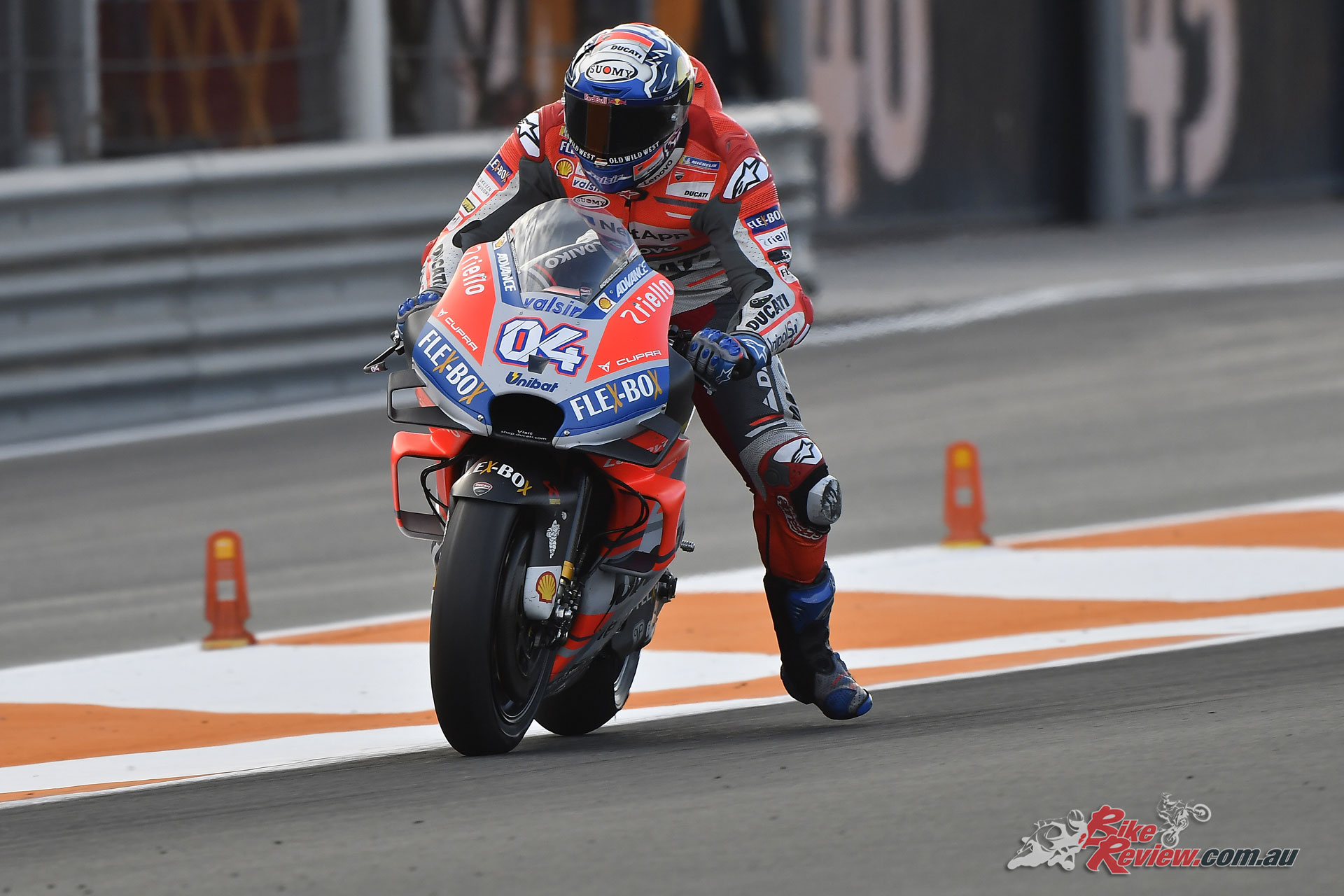 For Viñales and teammate Valentino Rossi – who ended the test eighth fastest – another new spec of engine was available for them to test, after Tuesday saw them test the first spec of the 2019 Yamaha engine. Ending the test top can only be a good sign for the Spaniard, who managed to complete 57 laps on Day 2, setting his quickest time on his 50th lap as we saw a mini time attack occur during the afternoon.

Maverick Viñales sayng, “It has been a positive test. We’ve been working a lot on improving for the first lap of the race. I’m actually really happy because from the first lap I felt good grip and I could push. There’s still work to do to further improve the engine braking and the smoothness of the power, so that’s what we will work on in Jerez. It was unlucky that we couldn’t ride all day, like we had planned. We couldn’t test the engines very well, so we’re going to decide after Jerez which of the two we choose. As I said, we need to try more, to be more convinced about the engine decision, but I think we’re on the right track. We need to focus on the riding style and getting a smoother bike will be very important, especially when there’s no grip during the race, but there is an upgrade coming that will help a lot. In these last two days I only focused on the engine and didn’t touch anything concerning the setting. I think we could have improved the set-up for Valencia a lot, but I’m happy that just focusing on the engine we improved by some tenths.” 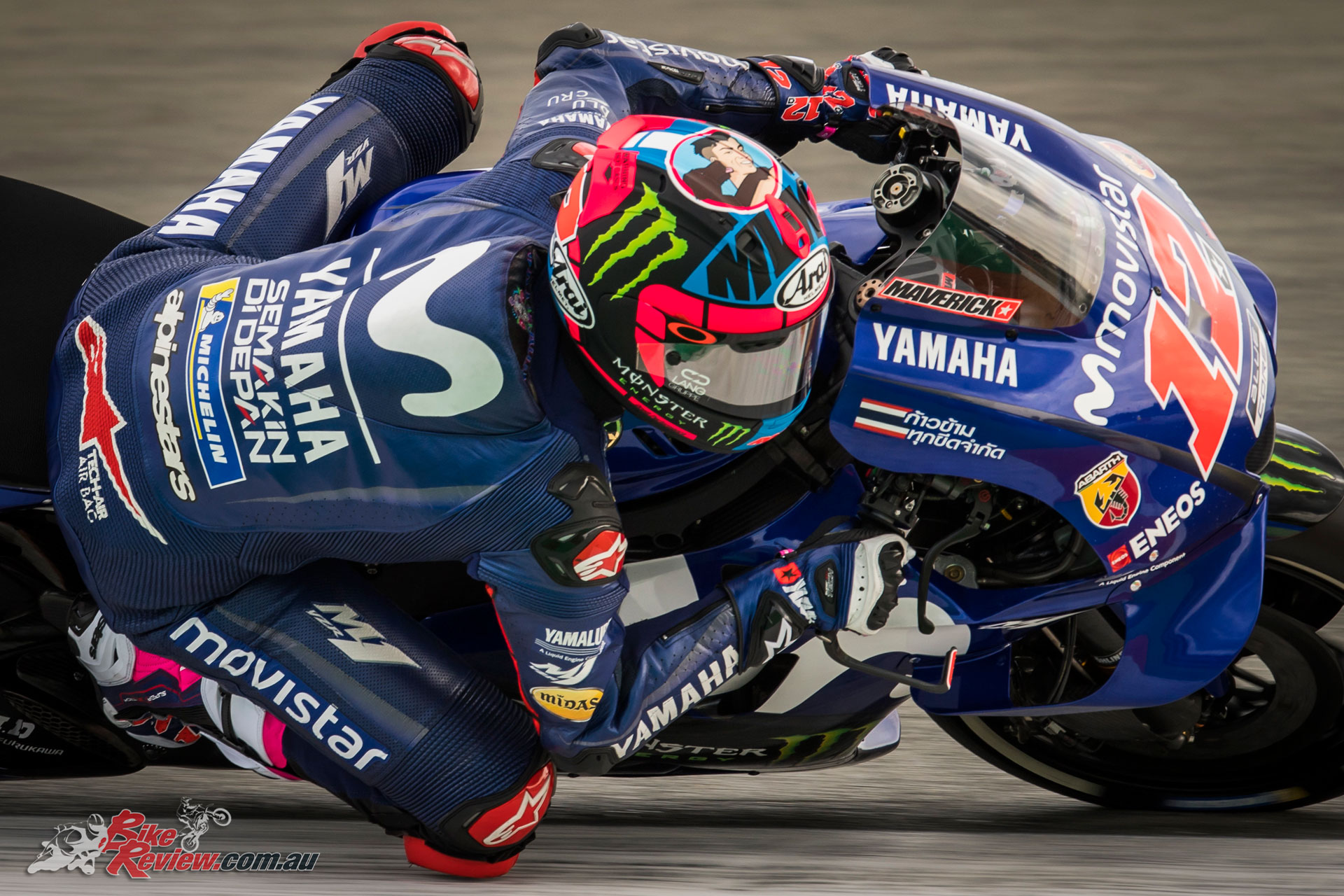 Viñales said it will now be important to continue testing in Jerez, feeling like they’ve made good progress but needing more time on the new one after another slightly later start on Day 2 due to a damp track. For nine-time World Champion Rossi, meanwhile, a good haul of 63 laps were set as the Italian ended the day 0.614 off his teammate.

Valentino Rossi adding, “We were able to improve compared to yesterday, but unfornately our opponents were able to improve more. Today was a bit more difficult. We tried a different engine and a different spec, but it was similar to the one we tried yesterday so they have more or less the same performance. For now we keep the same material, and next week we will try it again at another track, in Jerez, so there we’ll try to understand it in a better way. After that we have to wait for next year. The test in Jerez is important because in the GP there in May we weren’t very fast. We need to understand if we’re stronger now.” 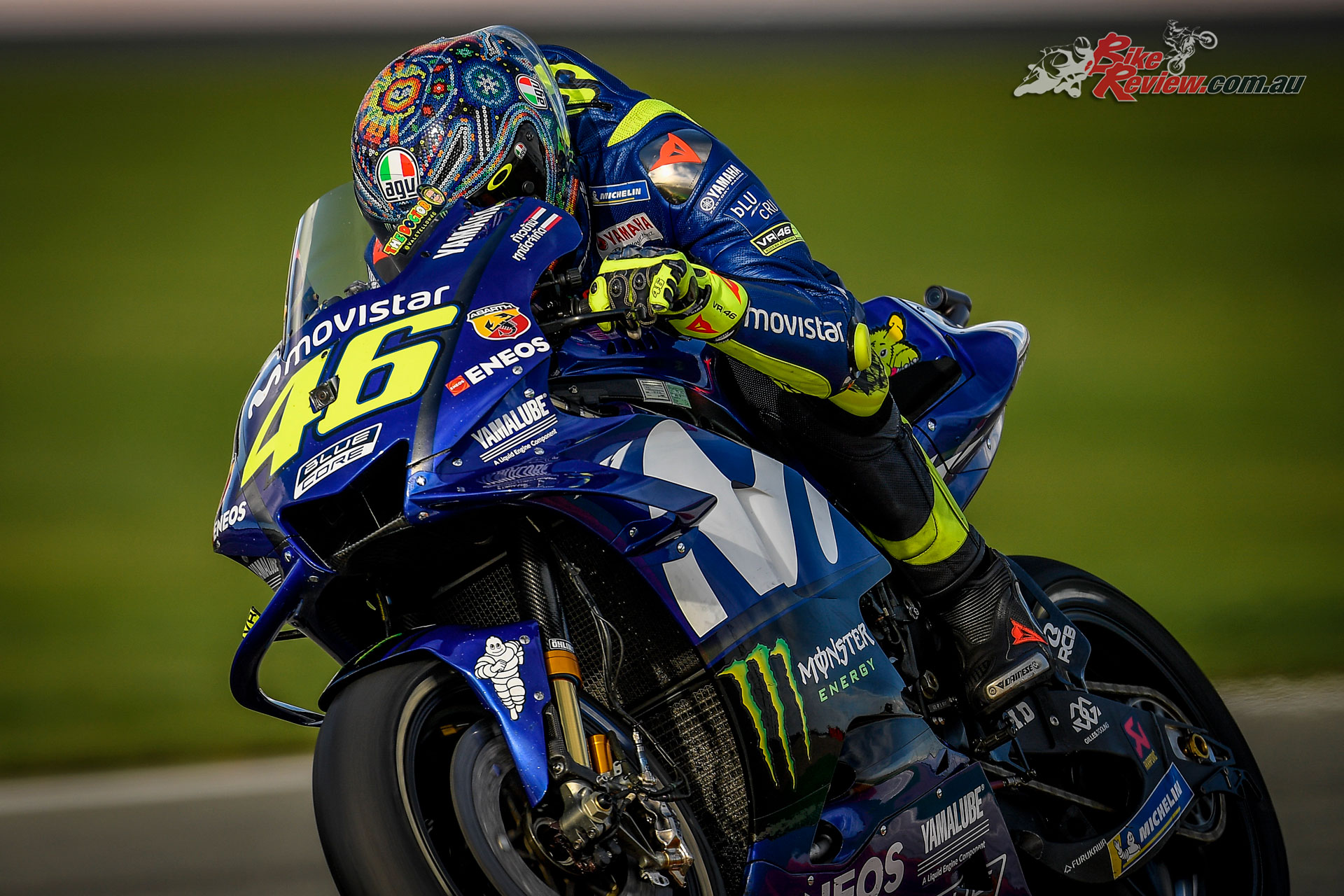 VR46 Academy rider and YZR-M1 rookie Franco Morbidelli (Petronas Yamaha SRT), meanwhile, did 57 laps as he continues to adjust from Honda to Yamaha – but that adjusting doesn’t seem to be taking the 2017 Moto2 Champion long. Interestingly, Morbidelli was also riding with a new spec engine to finish Day 2 just 0.217 off Viñales, but he was on a 2017 chassis. Carbon forks were also used by Morbidelli, while rookie teammate Fabio Quartararo got a valuable 63 laps (101 in total) under his belt as he impressed on his premier class debut – just 1.334 separated the Frenchman from the fastest time set.

For Marquez and teammate Jorge Lorenzo, the ‘second version’ 2019 bike was used. This bike isn’t the full 2019 version, but a combination of parts including the chassis, engine, a Ducati-esque tank modification on Lorenzo’s bike, aero packages, a new air intake, new suspension and a relocated steering damper. Honda have different combinations of everything and Marquez said he was concentrating on the engine, too. 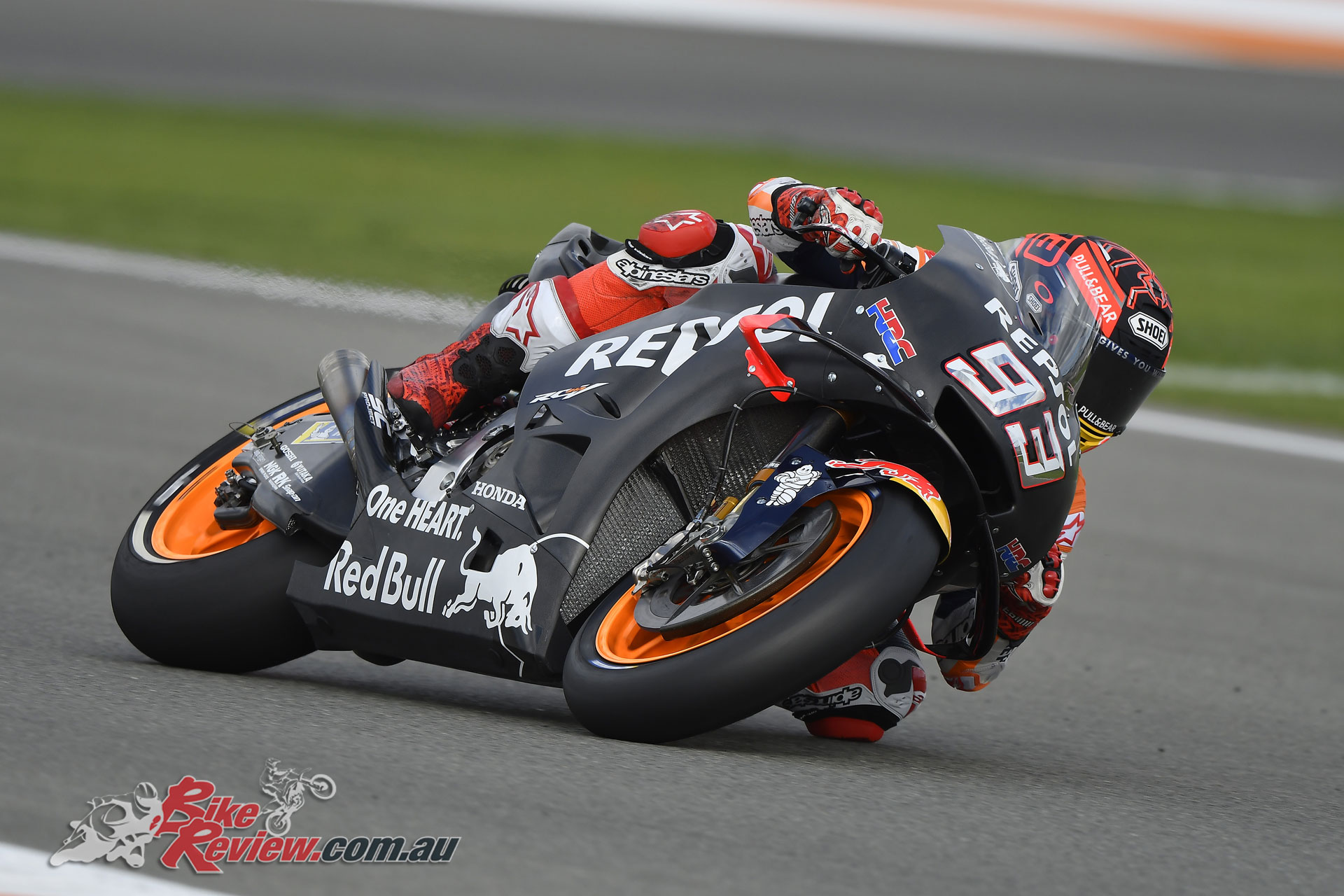 Marc Marquez saying, “It was a good day for us, as we tried many things and got a lot of information. Today we mainly worked on the new bike and the engine setup, but not only on that. We had many things to try and to understand, as the feeling is quite different. In the morning I was really comfortable and I was already able to be fast. Then I stayed there, remained calm and kept the rhythm, because to be honest, it was a must-not-crash situation today. We tried different combinations, spending a lot of time in the garage in the morning, but I was able to make a few consistent runs in the afternoon.”

Plenty of laps were done by both multiple World Champions – neither of whom are at full power with some injury struggles – on a productive day, with Marquez ending P3 after 53 laps, with Lorenzo completing 46 laps – 0.827 off the top for the ‘Spartan’. The number 93 had this to say: “It’s interesting because Lorenzo already tried the new bike. Step by step. The Honda is a difficult bike in the first days but he will arrive soon.” 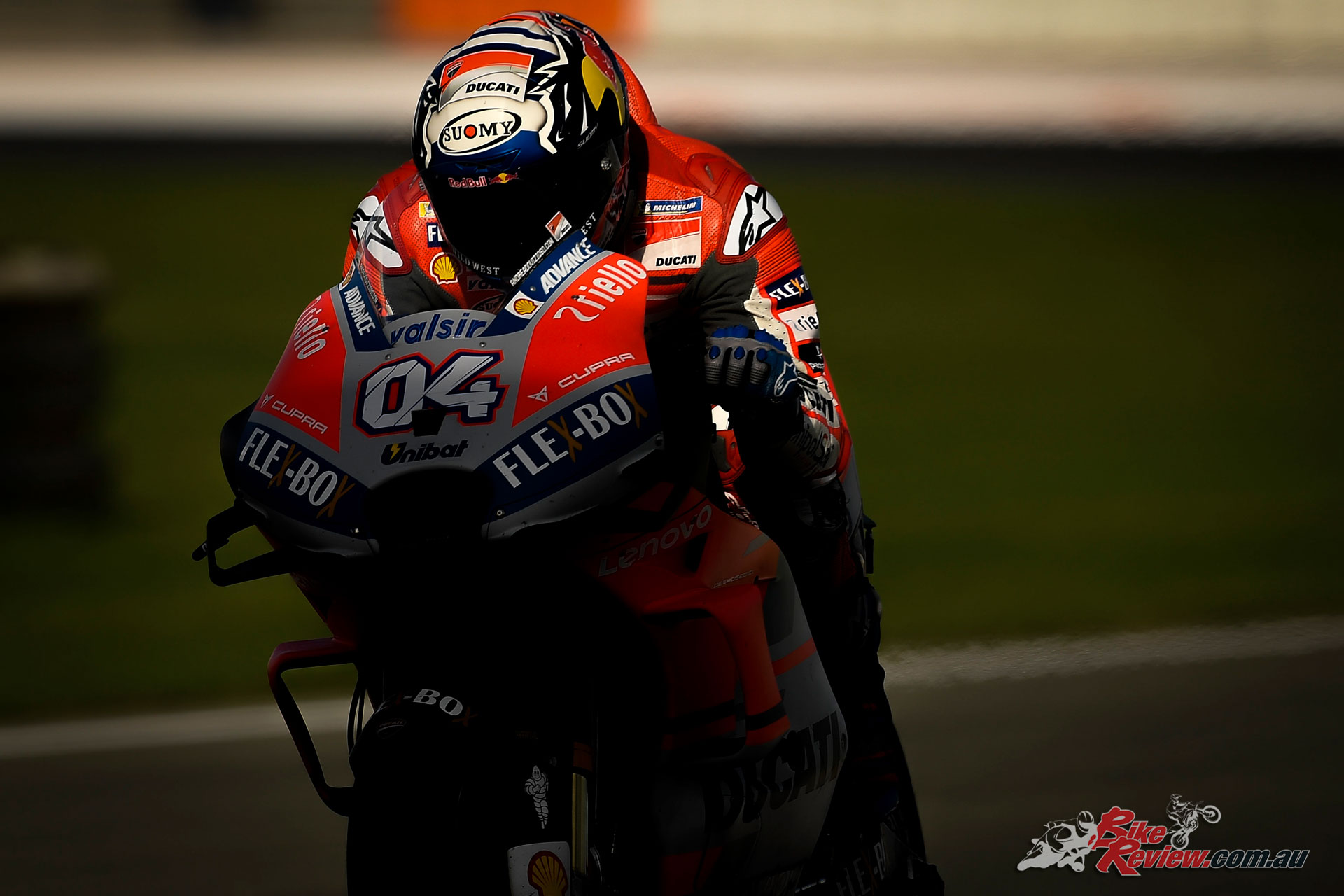 In the Ducati garage, 57 laps were completed by Dovizioso – and the second fastest time – after a more productive day for the Italian. The number 04 and teammate Danilo Petrucci were on Desmosedicis that were very close to being 2019 specs, the latter ending the day fifth fastest after 60 laps – 0.202 from top spot. Meanwhile, test rider Michele Pirro – who crashed at Turn 2 – was on the full spec 2019 machine, with Jack Miller (Alma Pramac Racing) on board a ‘first step’ 2019 bike, according to Team Manager Davide Tardozzi. Dovizioso commented he’d found something “interesting” that will now be explored further at Jerez.

Andrea Dovizioso explaining, “Today went better than yesterday because we were able to do a lot of tests, including back-to-back ones, during which we found some interesting solutions. These were small details and now we want to try them in different conditions and on another track to get some more precise feedback. These two days of tests at Valencia have been very positive and now we will try and confirm the same sensations at Jerez.” 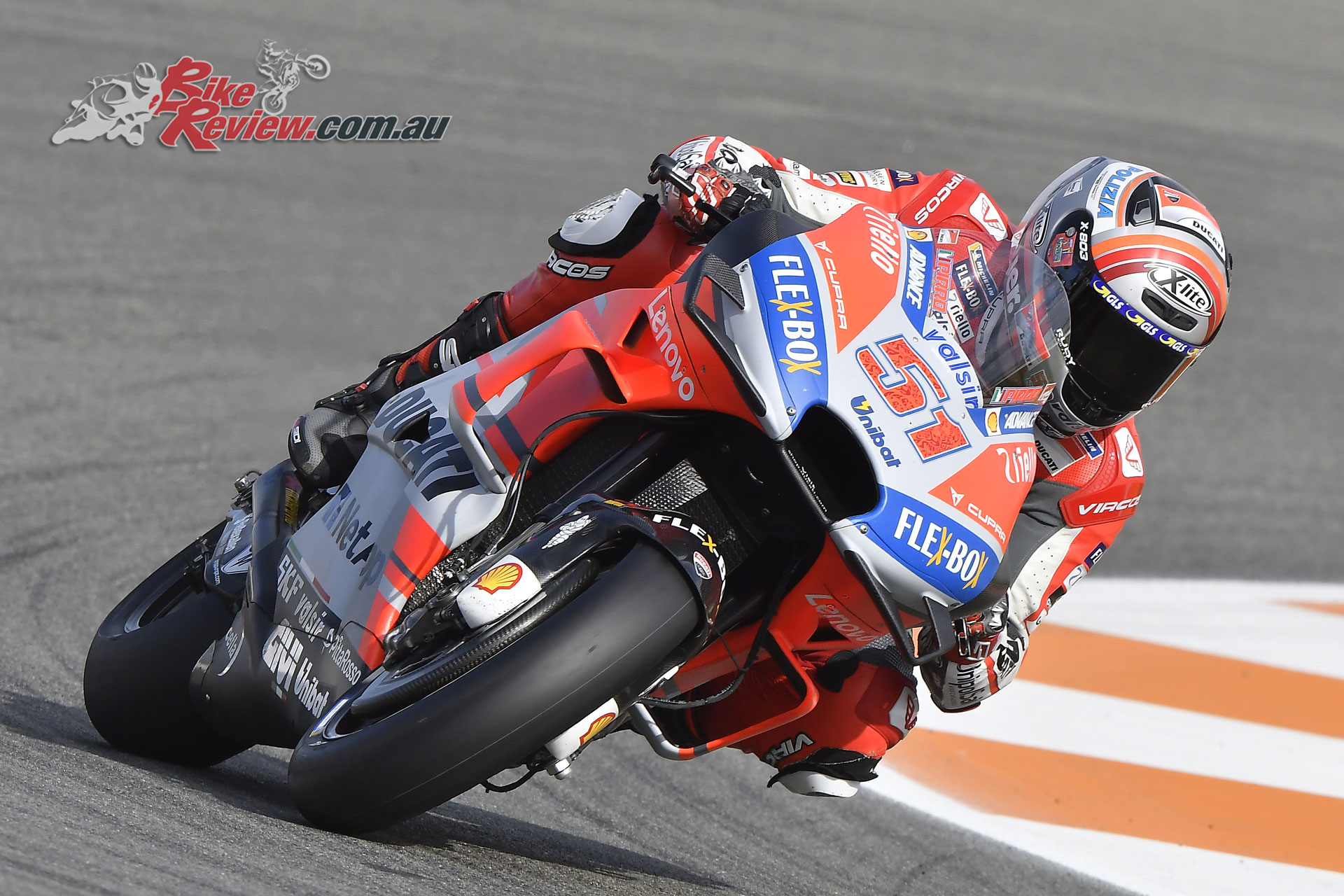 It was another good day for 2018 Moto2 World Champion Francesco Bagnaia, who – also according to Tardozzi – was on an early 2018 spec Ducati. The rookie was able to lap 49 times on Day 2 to bring his overall tally up to 87 as he ends the test just 0.648 off the fastest time. Fellow Desmosedici rider Tito Rabat (Reale Avintia Racing) returned to MotoGP action at the Valencia Test, and impressed immensely. Still nowhere near 100% fit, the Spaniard completed 59 laps on his GP18 on Day 2 – in addition to his 36 on Day 1 – to finish just over a second off pacesetter Viñales.

Elsewhere, some big news from the test over at Team Suzuki Ecstar was the new engine that Alex Rins was testing on Wednesday. The Spaniard was able to register 69 laps and set the seventh fastest time of the test, 0.497 from Viñales. And what about teammate Joan Mir? Well, the rookie continued his very solid debut to finish 0.957 off P1 after getting 56 laps done. Team Manager Davide Brivio says the engine will also be a key focus in Jerez, before important decisions are made going into the winter break. 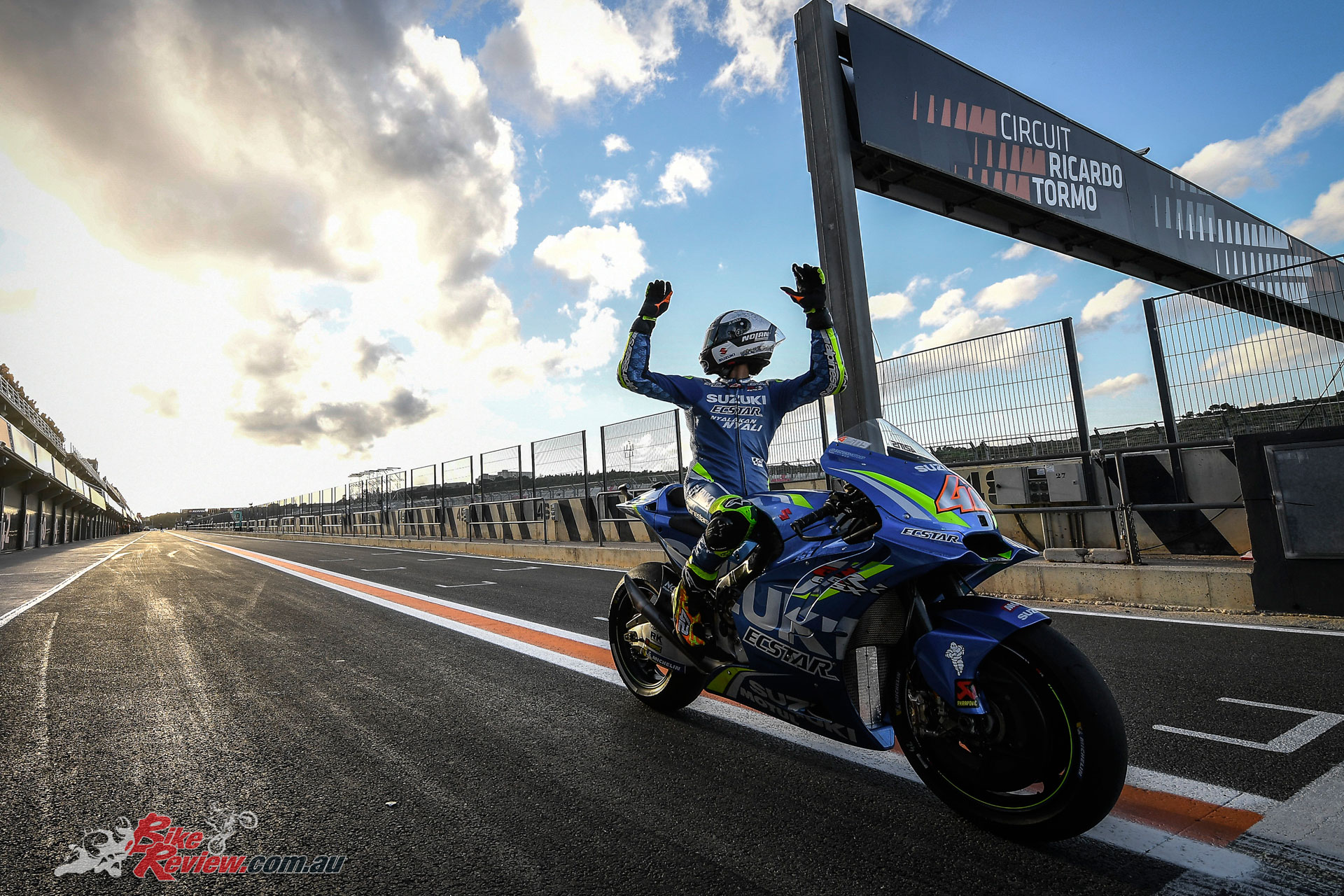 At KTM, it was a more difficult second day for Johann Zarco (Red Bull KTM Factory Racing) as he crashed twice on Day 2 trying to find the limit, ending the two-day test 1.752 off Viñales’ time. 50 laps were completed by the Frenchman, who was again the first rider to head out after the Circuit Ricardo Tormo took a while to dry in the morning.

Teammate Pol Espargaro ended 0.871 from Viñales in P13, 47 laps fulfilled for the Spaniard who had a new fairing to try – and was focusing on electronics, as he’d reported on Day 1. “By the end, we wanted to do a fast lap time because it’s what people see, but we had some problems with that. Anyway, I think we’ve done a good job. We tried many things on the bike. All the staff are happy and have still a lot of things to try. We’ll continue in Jerez!” 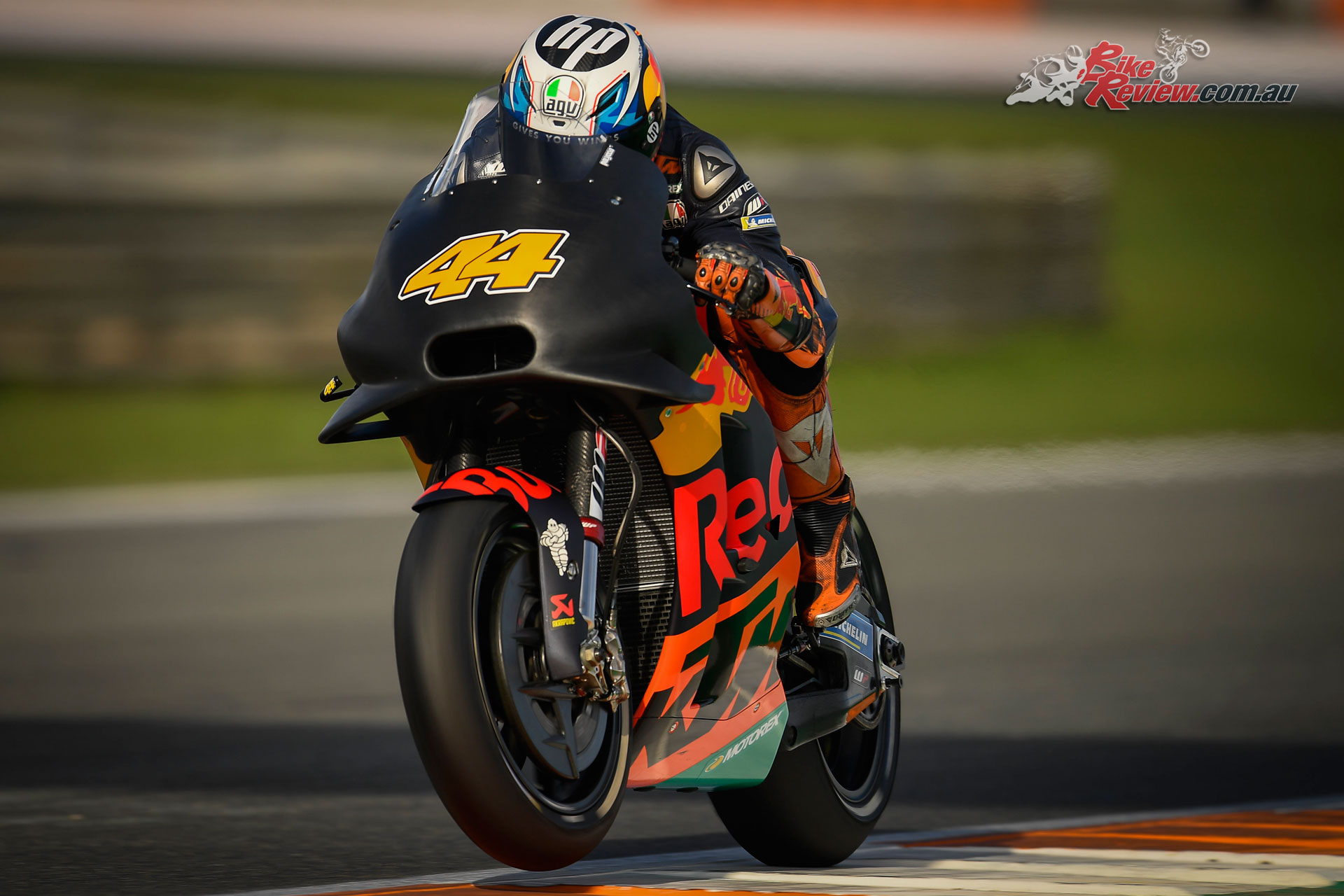 There was a late crash for Hafizh Syahrin (Red Bull KTM Tech 3) at Turn 10 after the Malaysian continued his adaptation to a new machine, with both he and teammate Miguel Oliveira riding 2019 RC16 machines. The Portuguese rider completed 46 laps on Day 2 – 79 in total – to finish 3.041 from the top, shaving over a second off his fastest time from Day 1.

With Andrea Iannone (Aprilia Racing Team Gresini) crashing twice and test rider Bradley Smith crashing once, it was also a difficult day for the new Noale factory riders, although Iannone shrugged off his two crashes as a natural consequence of finding the limit on a new bike. Teammate Aleix Espargaro was on engine testing duty and trying chassis updates, and a P10 finish and 55 laps completed signalled a solid day’s work as the Spaniard ended the two days 0.643 off the pace. Iannone was able to get 32 laps done, with Smith putting in the work to get 58 circulations complete. 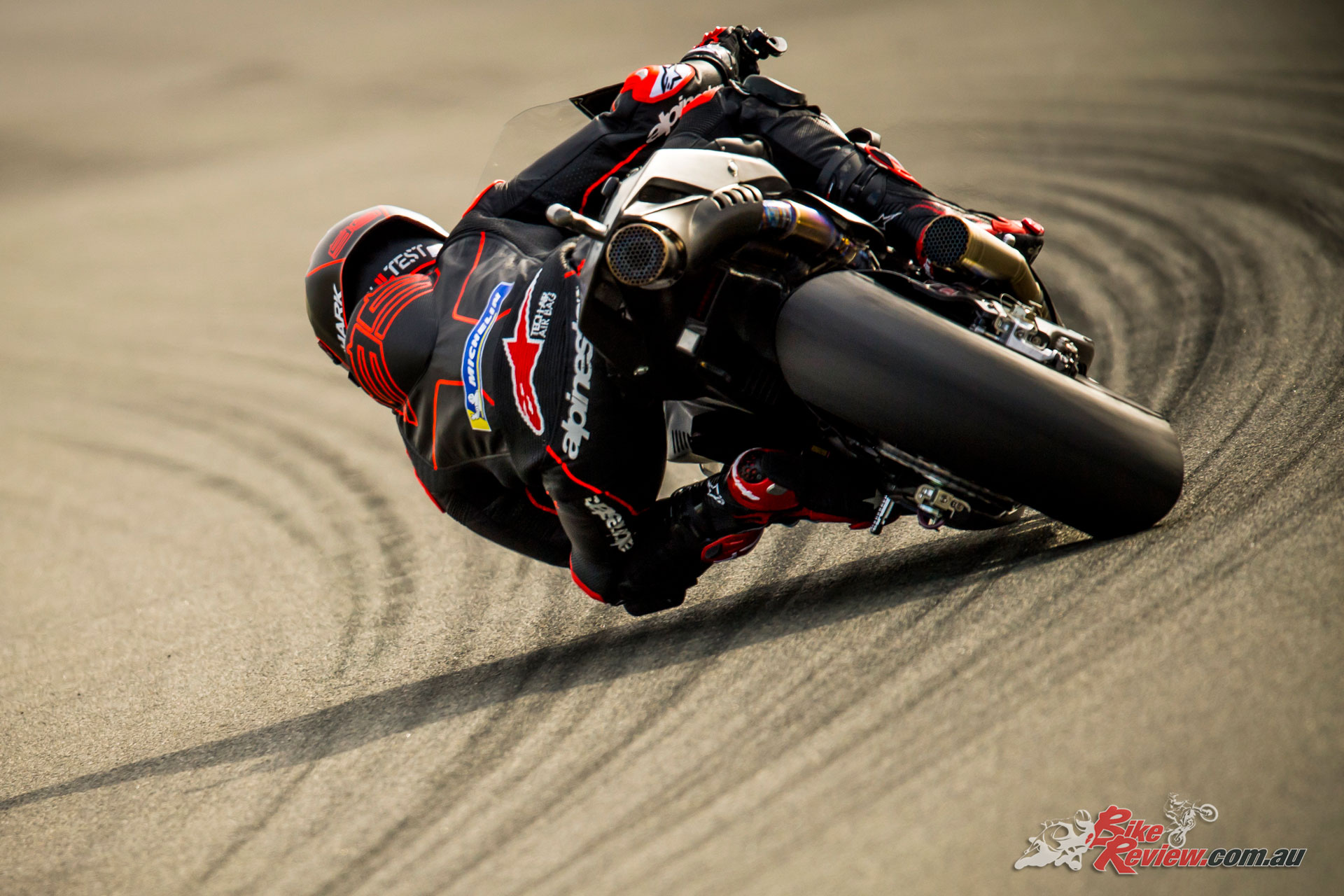 That’s a wrap from Valencia now, but there’s more action coming before the winter break! Make sure to keep up to date from the Jerez Test on the 28th and 29th November.