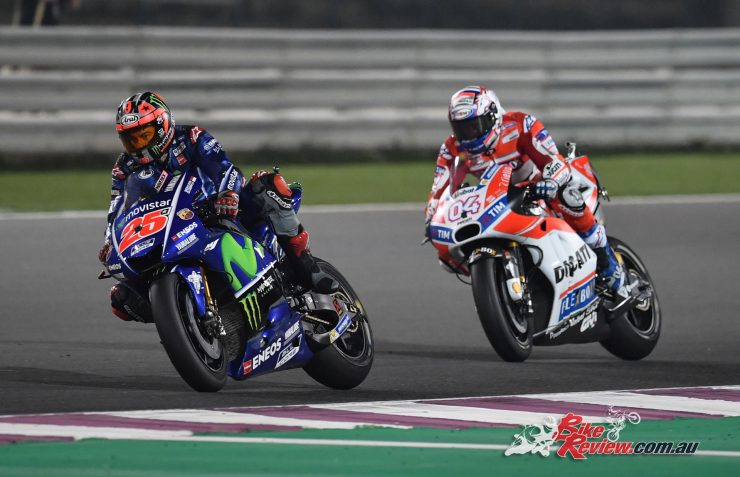 Rain, delays, uncertainty and a decision for a slightly shortened race distance prefaced the 20 laps that then blew the drama out the water: MotoGP is back for 2017, and in some style.

After stealing the headlines throughout preseason, Maverick Viñales (Movistar Yamaha MotoGP) retains them after his first win for Yamaha – but easy it wasn’t, as the polesitter fought it out with Andrea Dovizioso (Ducati Team) in an awesome desert duel. 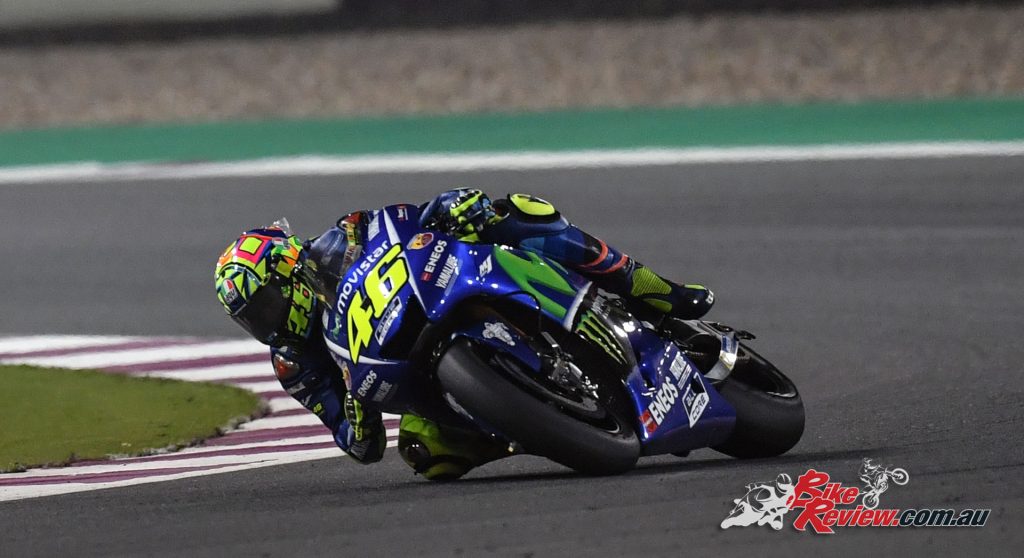 Valentino Rossi (Movistar Yamaha MotoGP) completed the podium in third after storming back from P10 on the grid.

A stunning start from Andrea Iannone (Team Suzuki Ecstar) from P2 was soon overshadowed as rookie Johann Zarco (Monster Yamaha Tech 3) slammed into the lead in the first laps, getting away and making a gap as Viñales found himself falling back into the clutches of his teammate. 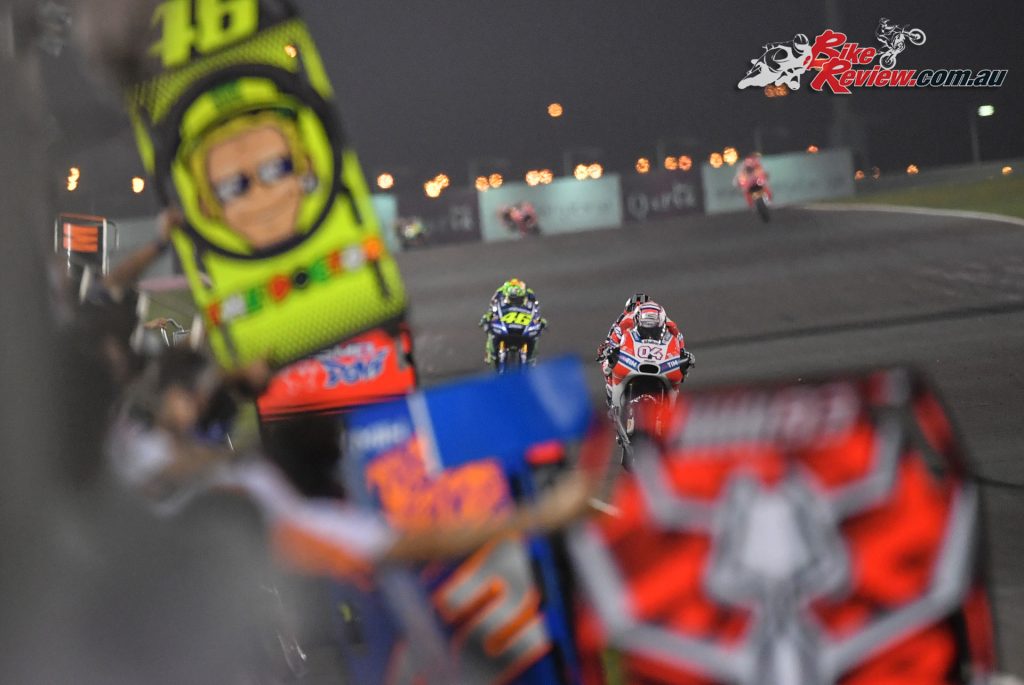 But despite an incredible display, the fairytale came to an early end for the Frenchman as he slid out of the lead soon after – leaving ‘DesmoDovi’ out front.

With the number 4 Ducati getting away in the lead, Iannone then crashed out of the fight for second – leaving reigning Champion Marc Marquez (Repsol Honda Team), Viñales and Rossi chasing the leading Desmosedici. After a classic scuffle between the number 46 and 93, the ‘Doctor’ set off in pursuit of his teammate.

And then there were three: Viñales, Dovizioso, and Rossi. 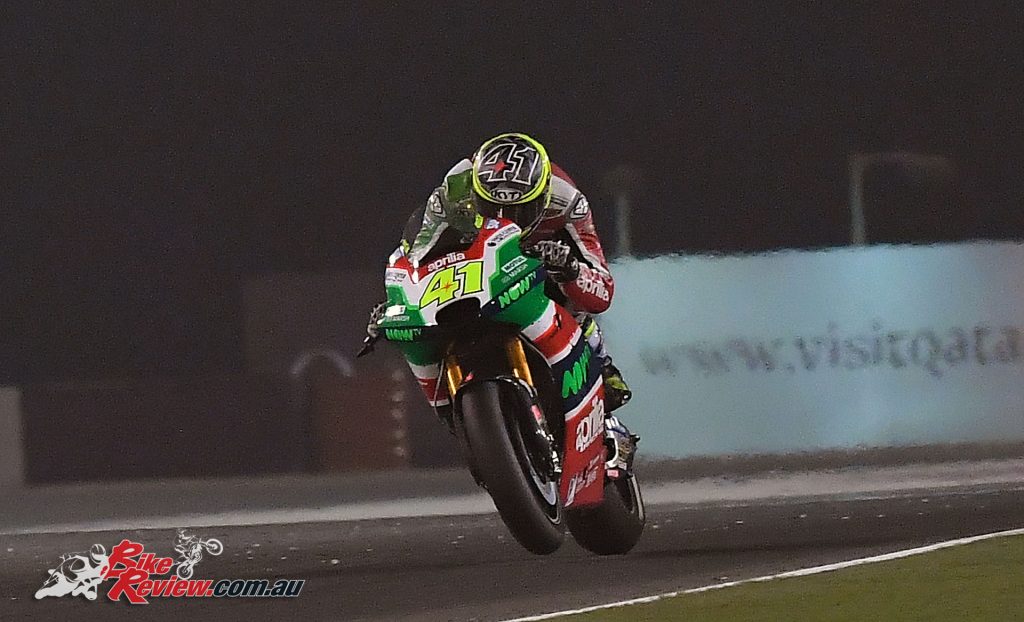 It wasn’t long, however, before there was some fresh air between lead two and the number 46 – with a duel setting in that saw Viñales’ corner speed pitched against the sheer might of the Ducati.

After trading places for a few laps and the race impossible to call, the Spaniard was then able to hold off the Italian on the penultimate lap – and made it to the line to take his second MotoGP win; his first in Yamaha colours 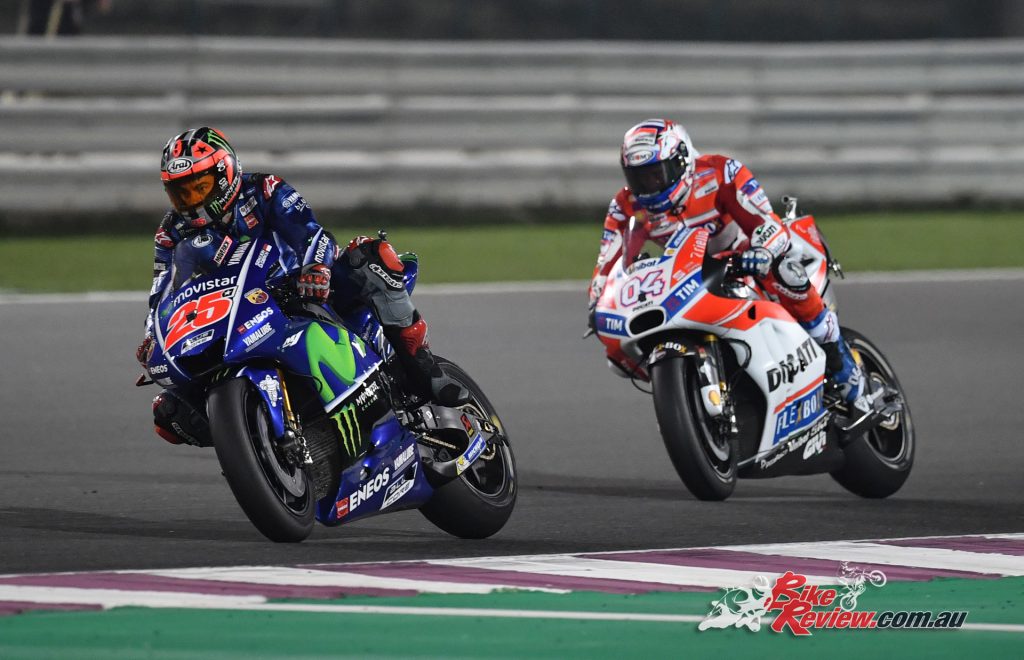 Marquez crossed the line fourth, just ahead of teammate Dani Pedrosa by the flag – who took fifth after getting the better of Aleix Espargaro (Aprilia Racing Team Gresini). Espargaro’s result was a historic first top six for Aprilia in the stunning first ride in Noale colours for the rider from Granollers.

Jorge Lorenzo (Ducati Team) went wide on the first lap after a solid start, down to near the back of the grid after carefully rejoining and then beginning a steady fight back through the field. Up into tenth with 12 laps to go, the ‘Spartan’ crossed the line in P11 by the end of play.

Cal Crutchlow (LCR Honda) crashed out of contention before rejoining and then suffering the same fate, with Alvaro Bautista (Pull&Bear Aspar Team) crashing out soon after, as well as Octo Pramac Racing rider Danilo Petrucci – joining Iannone and Zarco on the list of unluckies in round one, but sure to be back for more next time out.

Now, the paddock heads west to Argentina and Termas de Rio Hondo – ready for another amazing chapter of 2017 from April 7th to 9th. 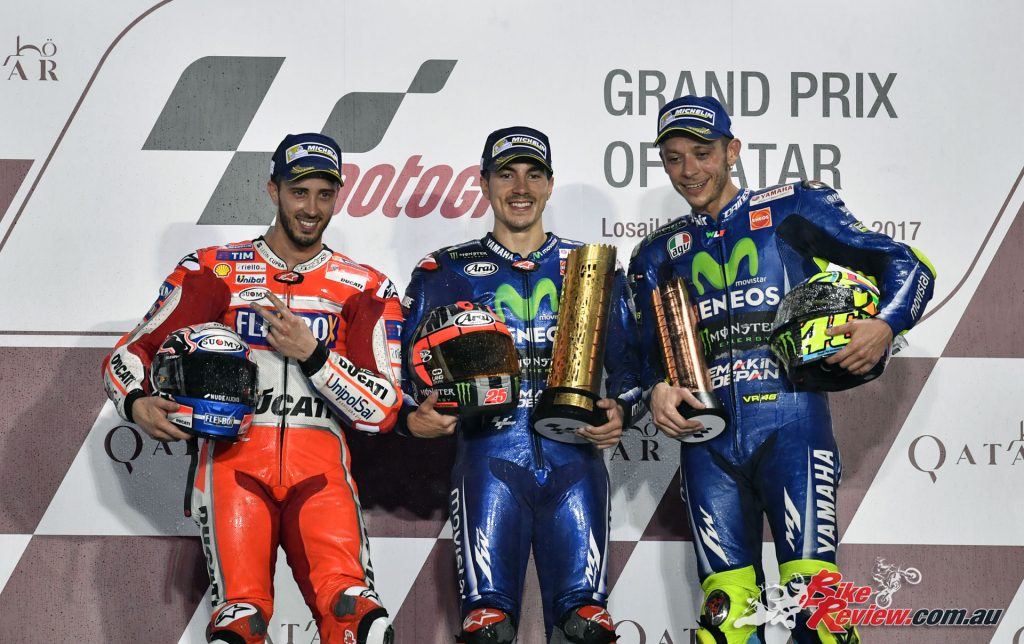 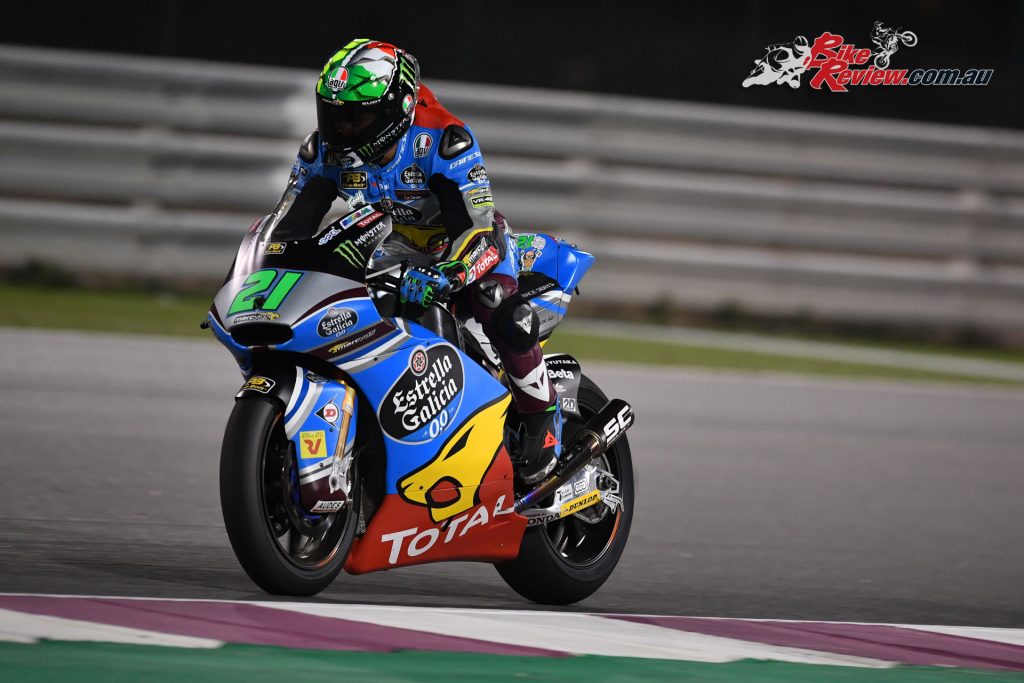 After a year of incredible podium performances in 2016, Franco Morbidelli (EG 0,0 Marc VDS) started off 2017 in stunning style – with his first win in Moto2.

2016 Qatar winner and key rival Tom Lüthi (CarXpert Interwetten) crossed the line in second, with Takaaki Nakagami (Idemitsu Honda Team Asia) completing the podium in an exciting taster of what could be to come in the 2017 Championship fight.

It was a stunning intermediate class debut for rookie Fabio Quartararo (Pons HP 40), whose huge mileage in testing paid off as he brought it home in P7 first time out, just losing out in a battle with Luca Marini (Forward Racing Team) over sixth. 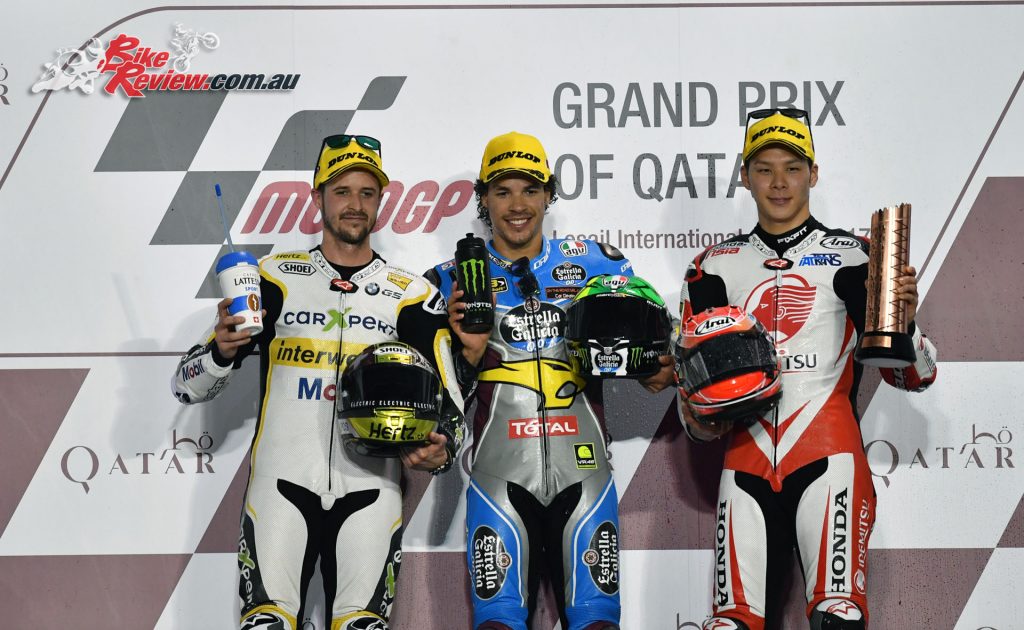 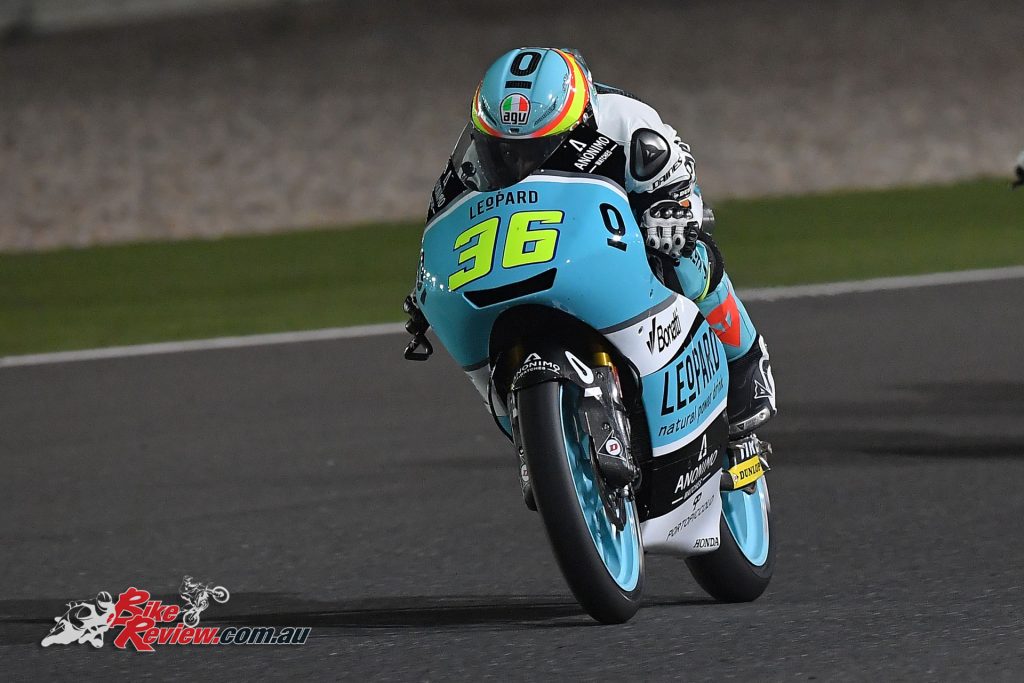 Mir, McPhee and Martin: the magnificent three in Moto3

Joan Mir (Leopard Racing) took an incredible first win of 2017 as the lights went out on the Moto3 season, making tactical perfection look easy on the way to the flag. British Talent Team rider John McPhee took second after a stunning ride up from outside the top ten, with poleman Jorge Martin (Del Conca Gresini Moto3) completing the podium.

The fastest rookie first time out was 2016 Red Bull Rookies Cup winner and former Asia Talent Cup victor Ayumu Sasaki (SIC Racing Team), taking an impressive P11 on his full-time debut – despite being forced to evade another incident only a handful of laps before the end. 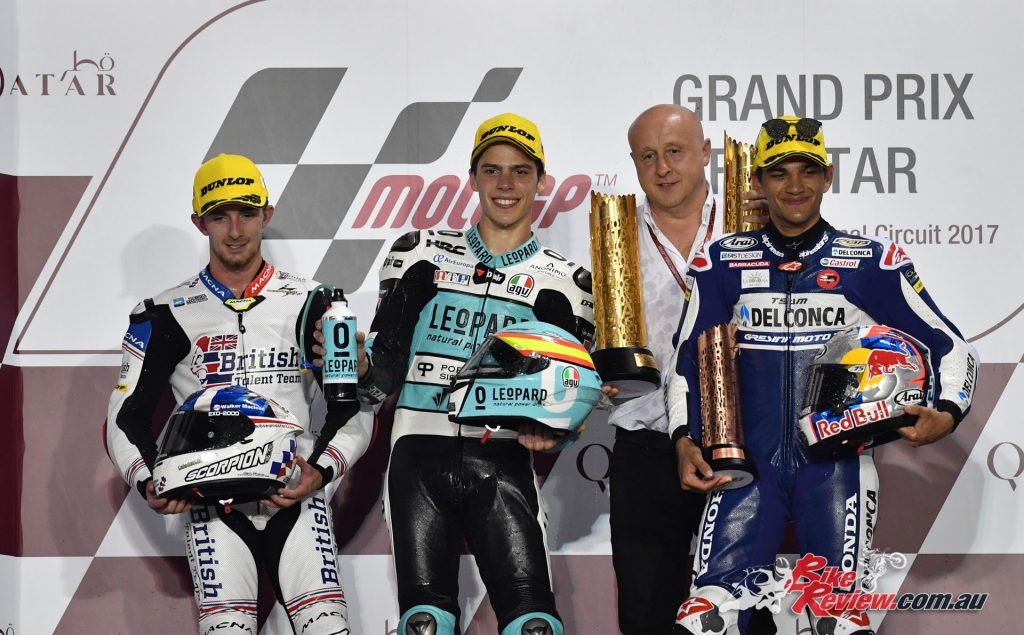