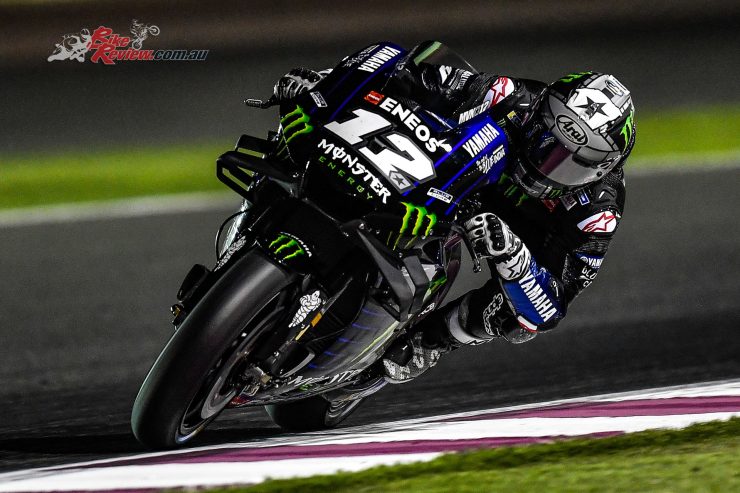 Maverick Viñales leaves the 2019 Qatar MotoGP Test with a big smile, having topped two of the three days, the first and final, a 1:54.208 to end the test 0.233 clear. The top spot was again under threat from an incredible performance from rookie Fabio Quartararo in second, with reigning Champion Marc Marquez completing the top three. 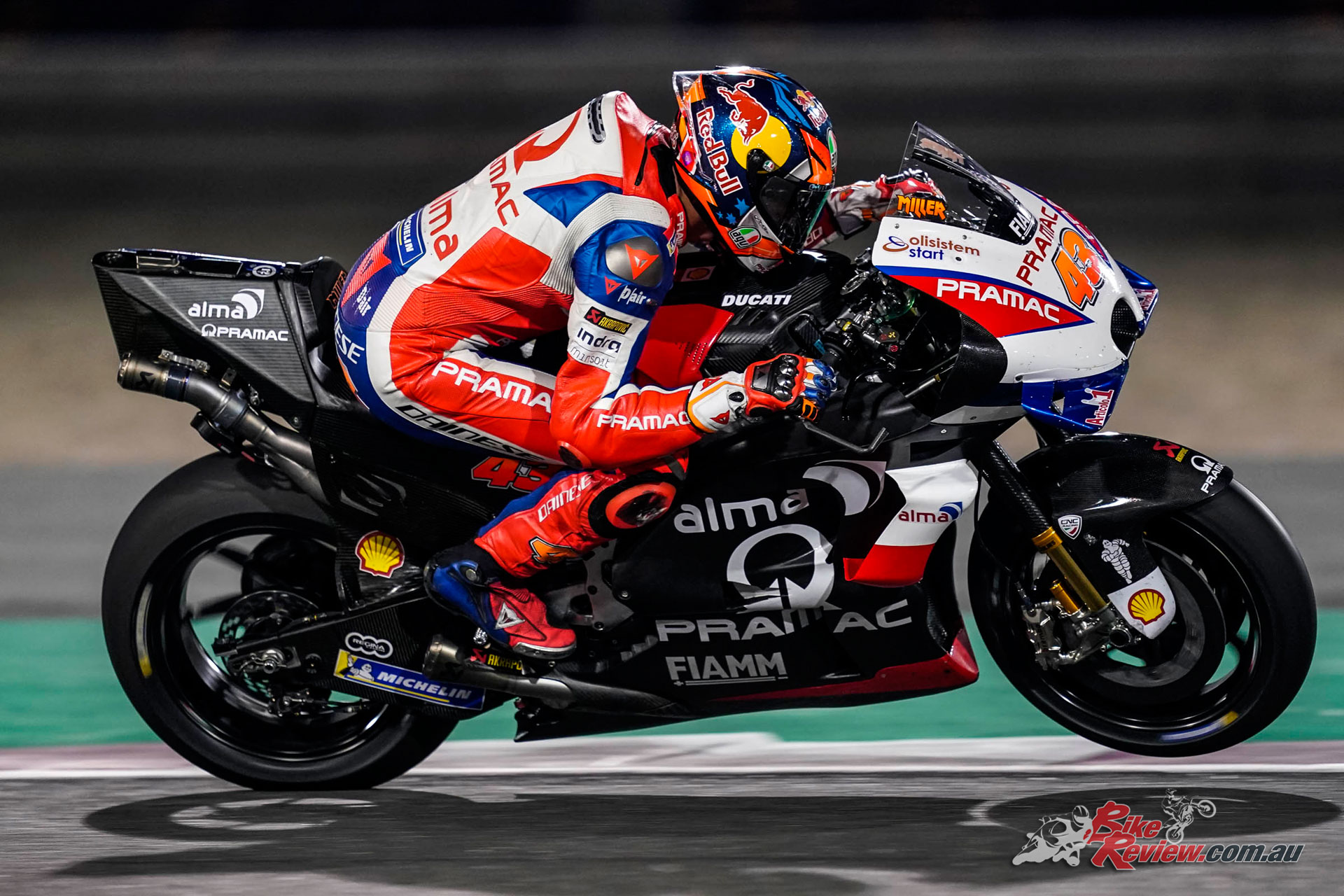 Australian Jack Miller also had a success test at the Losail circuit, where the first race weekend will start in 10 days, Jack having worked hard on the race pace  on the final day, with the results very interesting. Jack lapped consistently in 1:55 for an excellent long run of 14 laps, later saying, “I’m satisfied with these three days of testing. We did a good job and the race pace was very good. At the end of the day, we tried a time attack with a good lap time even if the conditions of the track were not the best. There are still some details that we need to improve but we are in the right direction”.

After a tougher Day 2 for Valentino Rossi, the ‘Doctor’ was back inside the top four just behind Marquez, with Jorge Lorenzo another resurgent runner as he completed the top five. 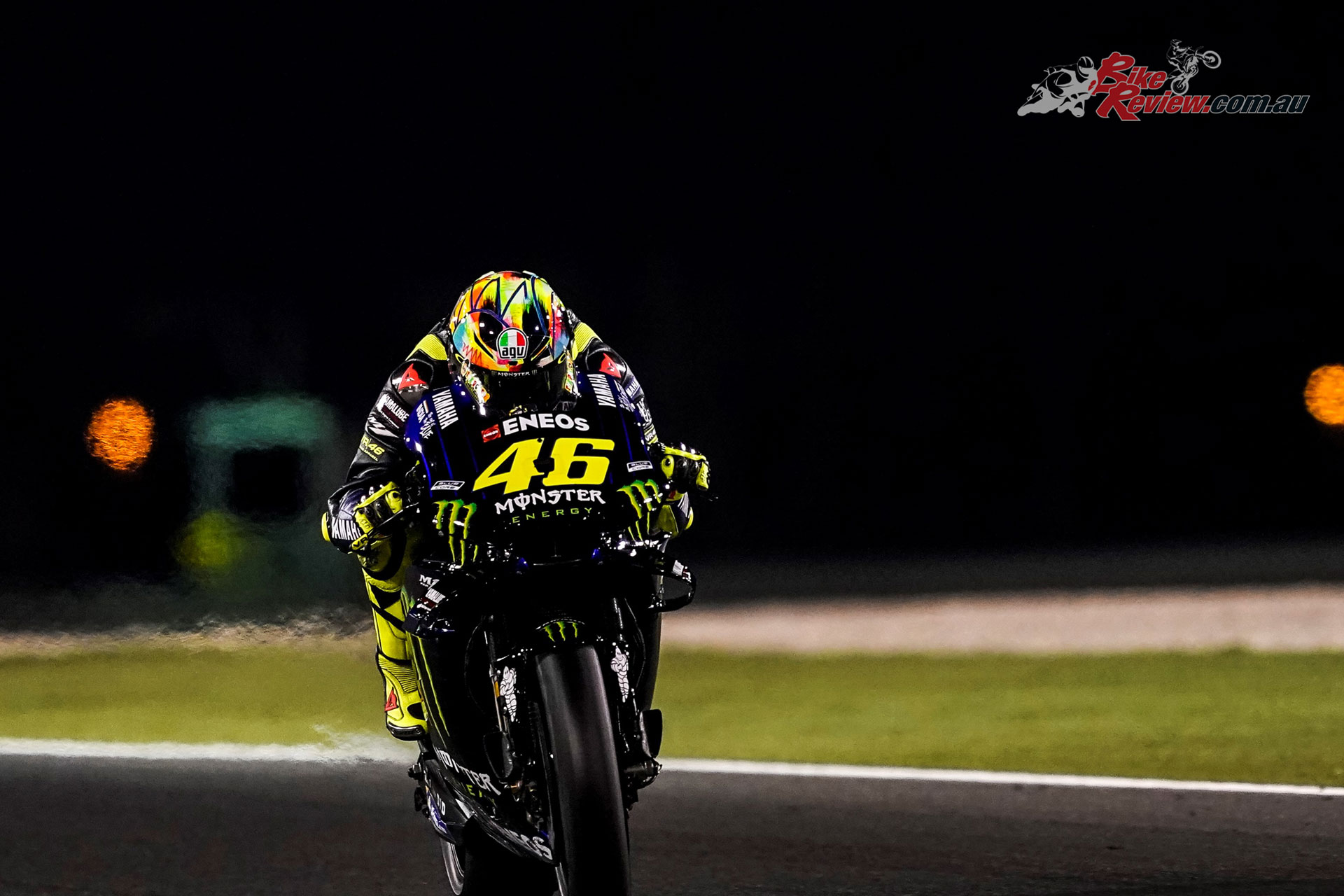 Valentino Rossi saying, “Today was a good day, we worked in a good way and I was quite strong. Also, with the race tyres my pace is quite good, and in the time-attack I was also OK. I’m in P5 at the end of the three days, which is not so bad. For me, also the race pace is quite good, although I think we will need something more to be able to try to fight. But today we already closed the gap by a lot, as we put it all together, with all the staff. I think that, for this night, we’re done, and we’ll see in two weeks if it’s enough.”

So it’s Yamaha who leave Qatar on top despite a windier Day 3, with Viñales putting in 50 laps on Monday and Rossi 38. The Italian was pretty positive and said it came from putting “everything together”, but the Spaniard did still insist they need to improve and one of the big things he pointed out was edge grip, where he said the Yamaha is lacking a little compared to other manufacturers. 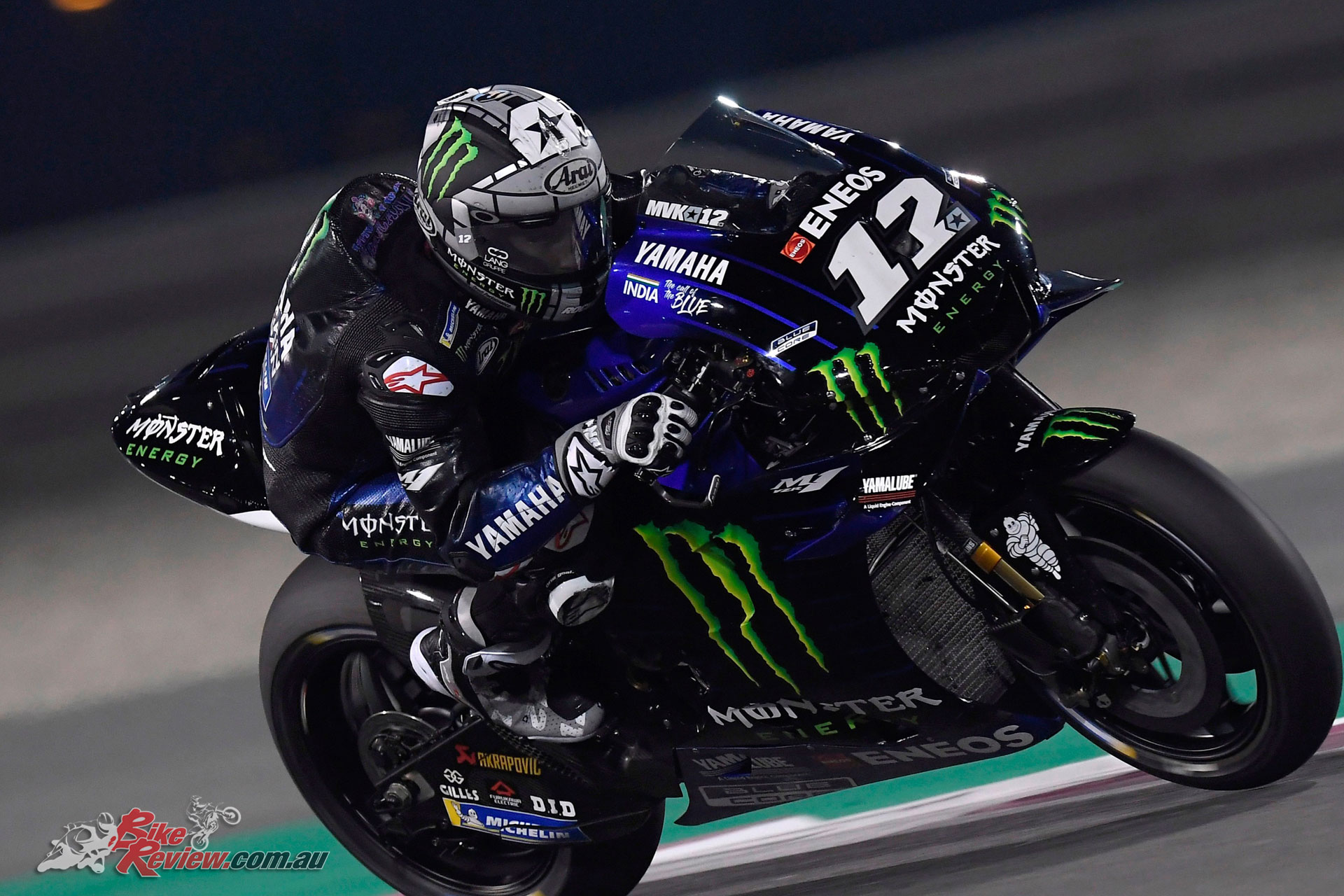 Maverick Viñales saying, “Honestly, I have been riding really good on the track, I felt like I was going very fast with the amount of grip that the track provided today. But we need to improve. I don’t have really good grip on the edge, so we need to keep working, especially in that area. On the acceleration side we improved quite a lot since Sepang, and at the moment I’m quite satisfied with what we have in the braking area. My race pace is not bad, I tried ten laps just to understand how the bike is doing, but it was very cold for the medium tyres. Anyway, I rode quite well, with quite a good rhythm. Maybe I could have pushed a little more. However, we still need to improve for the race. I think we are going to be ready. The race will be very important for us. Our bike has really positive points, but also a few negatives, so we now need to come to a conclusion and see where we can improve.”

Quartararo, meanwhile, did 48 laps and showed his Day 2 showing was far from a fluke, with teammate Franco Morbidelli shooting up the timesheets to sixth on Monday too. That makes good reading for both the Iwata marque and the new Petronas Yamaha SRT team, with all Yamahas in the top six. 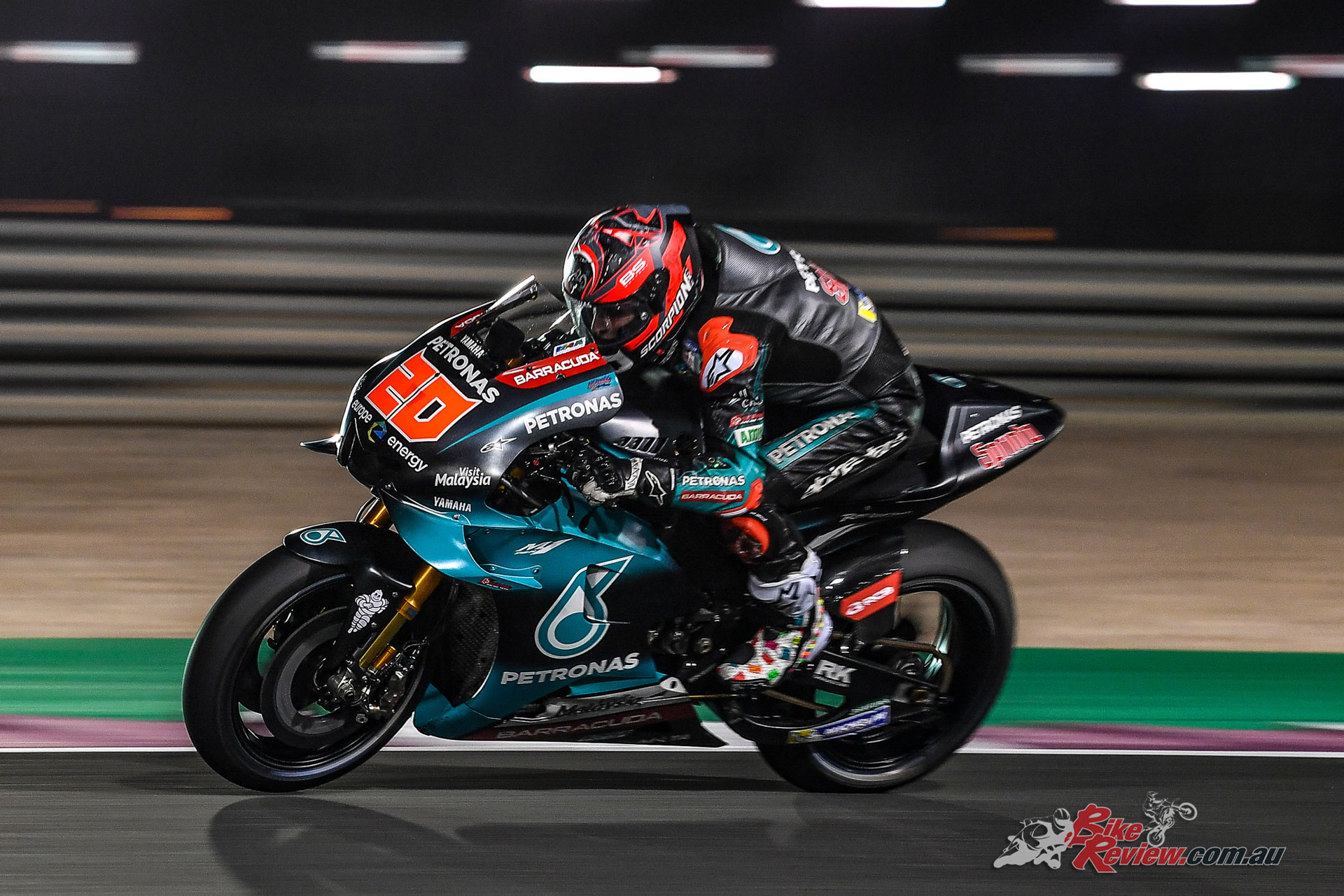 Fabio Quartararo enthusing, “It has been a very positive day for us. This morning the day wasn’t looking so good because it was cold and there was sand on the track, but in the end the wind dropped and once again every time I went out on track I felt better. So far this year I have only had six days on the bike and to be honest I feel very comfortable with it. I have managed to do a couple of really fast laps and that is what we were lacking at Sepang. Here we have not struggled to do the lap times, we were on the pace quickly and they have been fast. It was also good to get a race simulation in. Compared with the one I did at Sepang, this one was better in terms of my pace but it was also difficult because I was riding alone virtually the whole time. I think we are making gradual, non-stop progress.”

Repsol Honda were the only other team and manufacturer to mix it with them on Monday, although both machines took tumbles – riders ok. Marc Marquez was third with a 1:54.613 and did 53 laps, again showing the capacity to put more mileage on his shoulder, and teammate Jorge Lorenzo took P5 just 0.040 off Marquez and 0.002 off Rossi. After two much tougher days on the timesheets hovering outside the top 15 as he both changes bike and comes back from a scaphoid broken only a month ago, the five-time World Champion catapulted himself up to a 1:54.653 on Day 3. 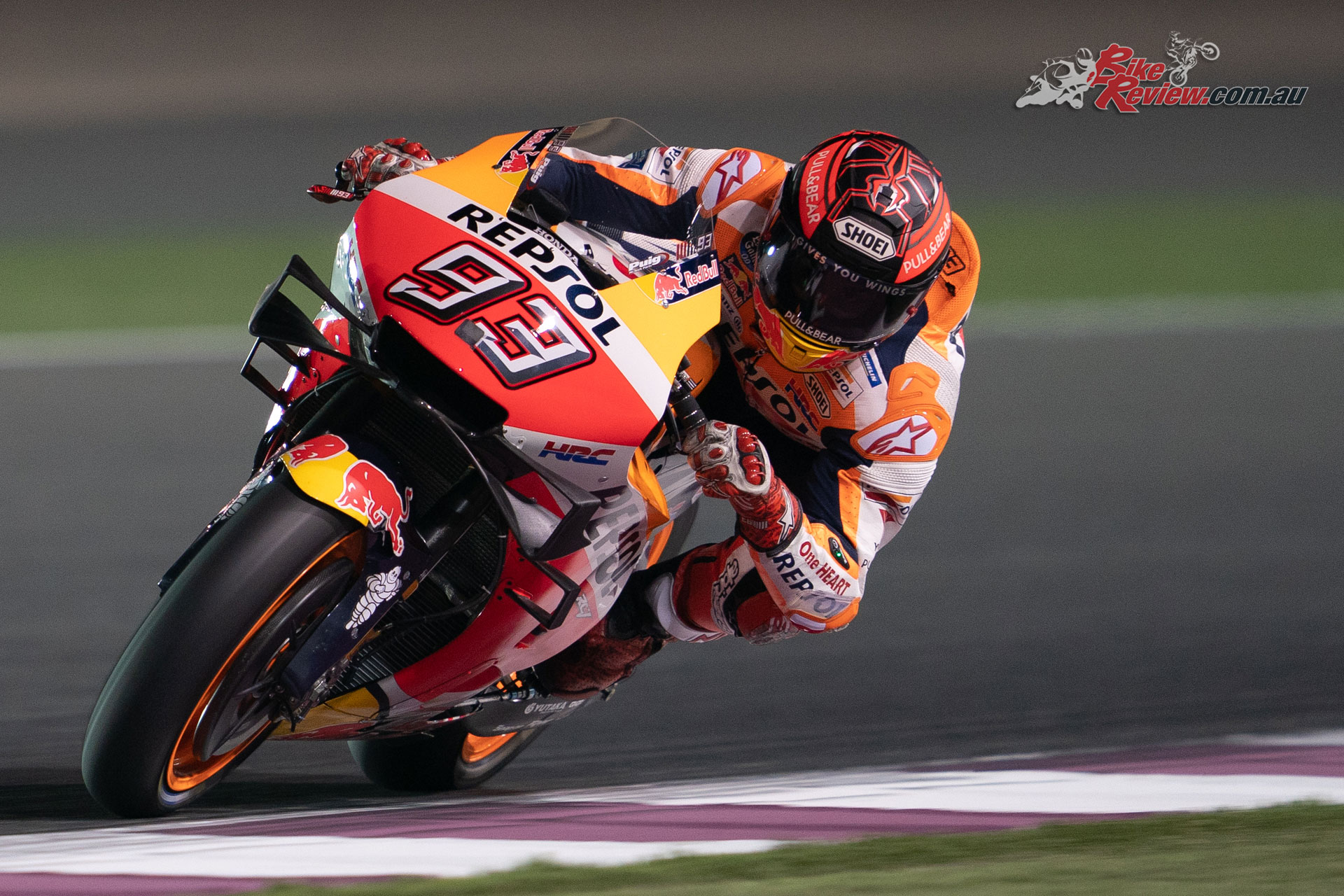 Marc Marquez saying, “I feel ready today, ready to start the season. Like yesterday we did a lot of laps, worked well and made some more steps. We’re still not 100% but we have a good feeling. Qatar is a track where normally we struggle, but at this test we are there with everyone else. It was a bit difficult with the wind and the temperature on track tonight but we still did what we needed to.”

Jorge Lorenzo adding, “We started the test not adjusting the setting. When we started to work on the setting we were able to improve the bike and our speed. I could ride the bike better, we improved things a little here and a little there and made a big step to be competitive already. We’re very satisfied, the potential is certainly there and it is just my third day as an official Honda rider because before I wasn’t fully fit. When I’m fit and riding better, we can be even stronger.” 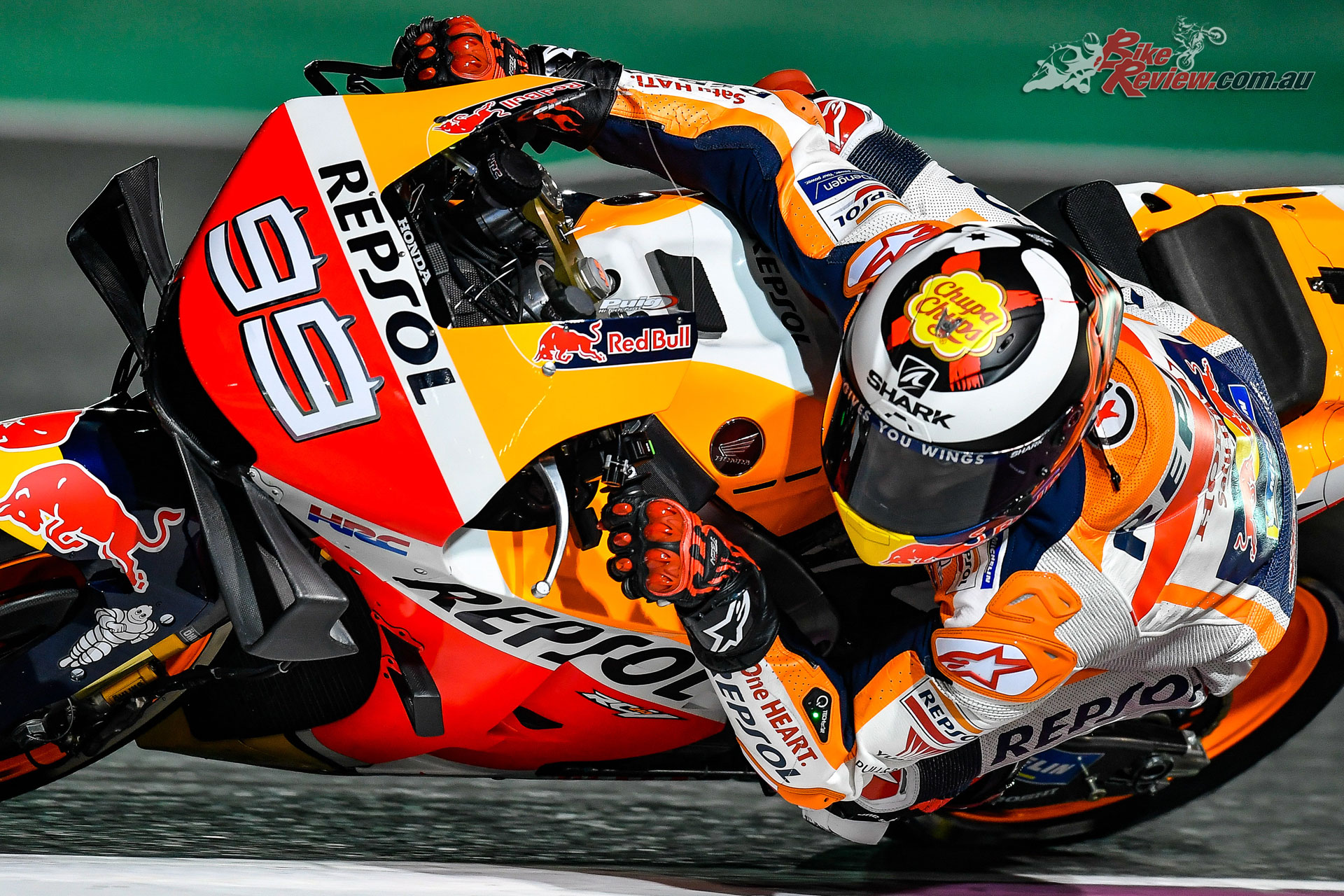 Takaaki Nakagami, meanwhile, also had a solid final day as he finished the Qatar Test in eighth despite a crash, and the Japanese rider concludes testing with a sheet of consistent top tens. He did 50 laps with a best of 1:54.789, with teammate Cal Crutchlow down in P17 after 39 laps.

Another big headline on the last day of preseason came from the consistently impressive Pol Espargaro, who was a stunning seventh on a best effort of 1:54.770. The Spaniard put in 37 laps as the Austrian factory continue working on the details, and the second quickest KTM was actually Miguel Oliveira on Monday as the Portuguese rookie was within around a second of Espargaro. Johann Zarco was a little further down the timesheets on Monday in P22. 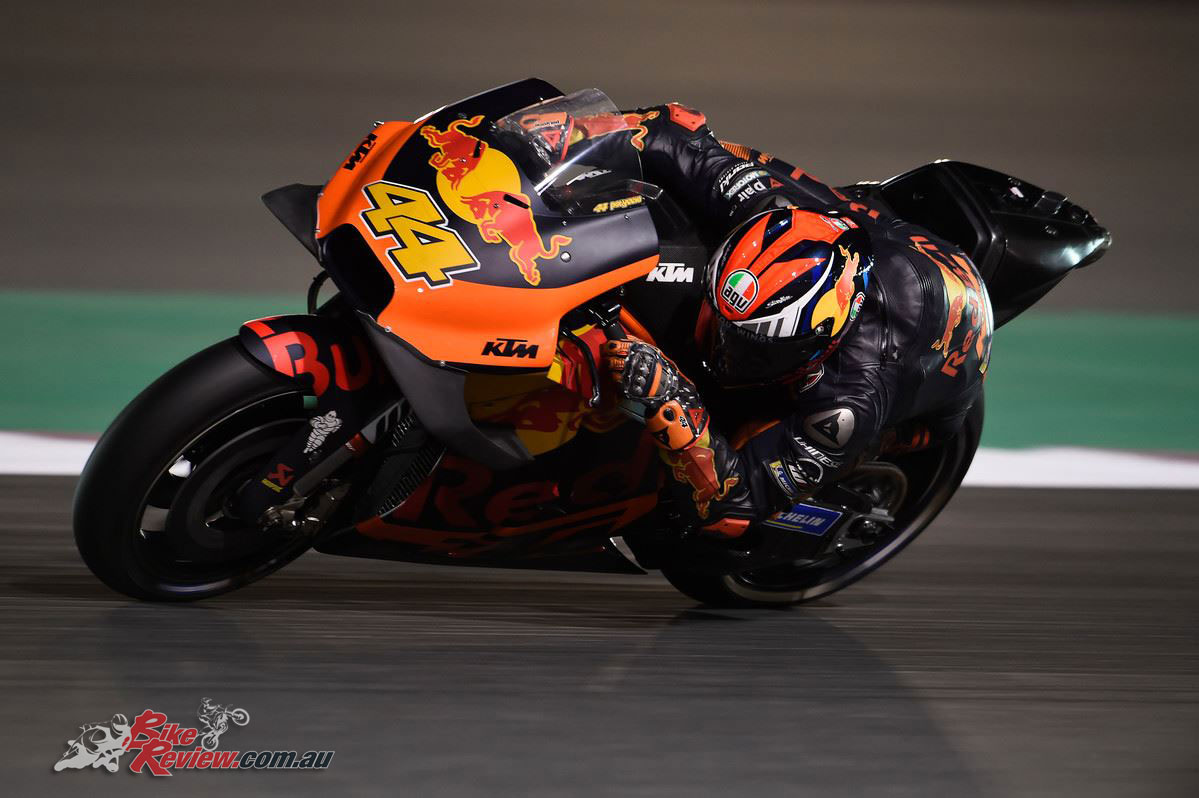 Danilo Petrucci, meanwhile, retained his stronghold on the timesheets amongst the Borgo Panigale machines. The Italian was ninth on Day 3 after another 43 laps, with teammate Andrea Dovizioso down in P15 after 50 but they focused on long runs and race setup.

The engine and fairing and bigger decisions were already made before the end of action. Jack Miller (Alma Pramac Racing) improved to tenth on his final of 57 laps, and his teammate, rookie Francesco Bagnaia, wasn’t far off in P13 – just two tenths in arrears. He was closely followed by Reale Avintia Racing’s Tito Rabat. 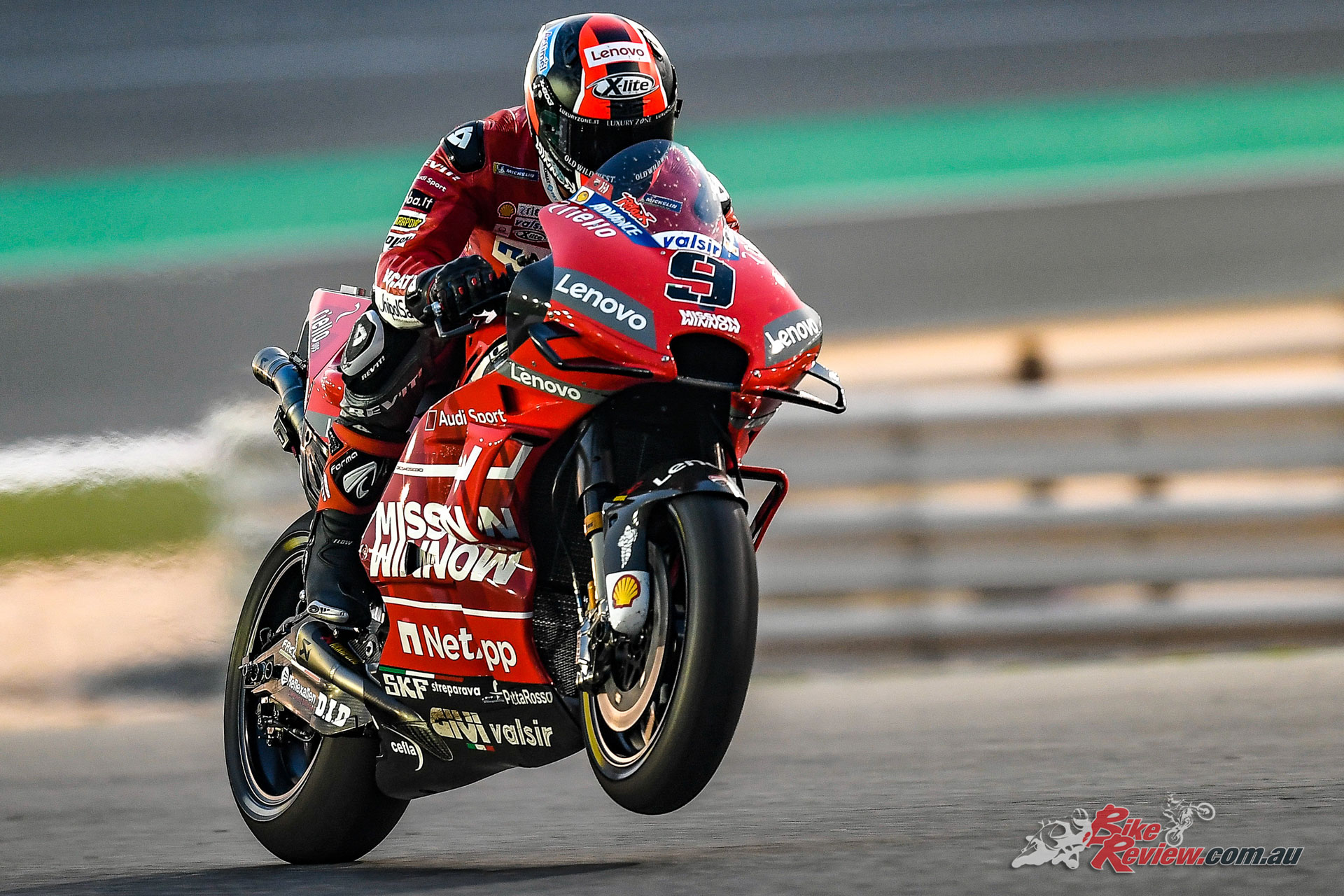 Between that Ducati invasion were nestled both of the Team Suzuki Ecstar machines. Although third overall from his Day 2 laptime, Alex Rins ended Monday in P11 on a 1:54.852 after 41 laps and rookie teammate Joan Mir was the second quickest rookie in P12. The gap between the two Hamamatsu factory machines was only a tenth and a half… 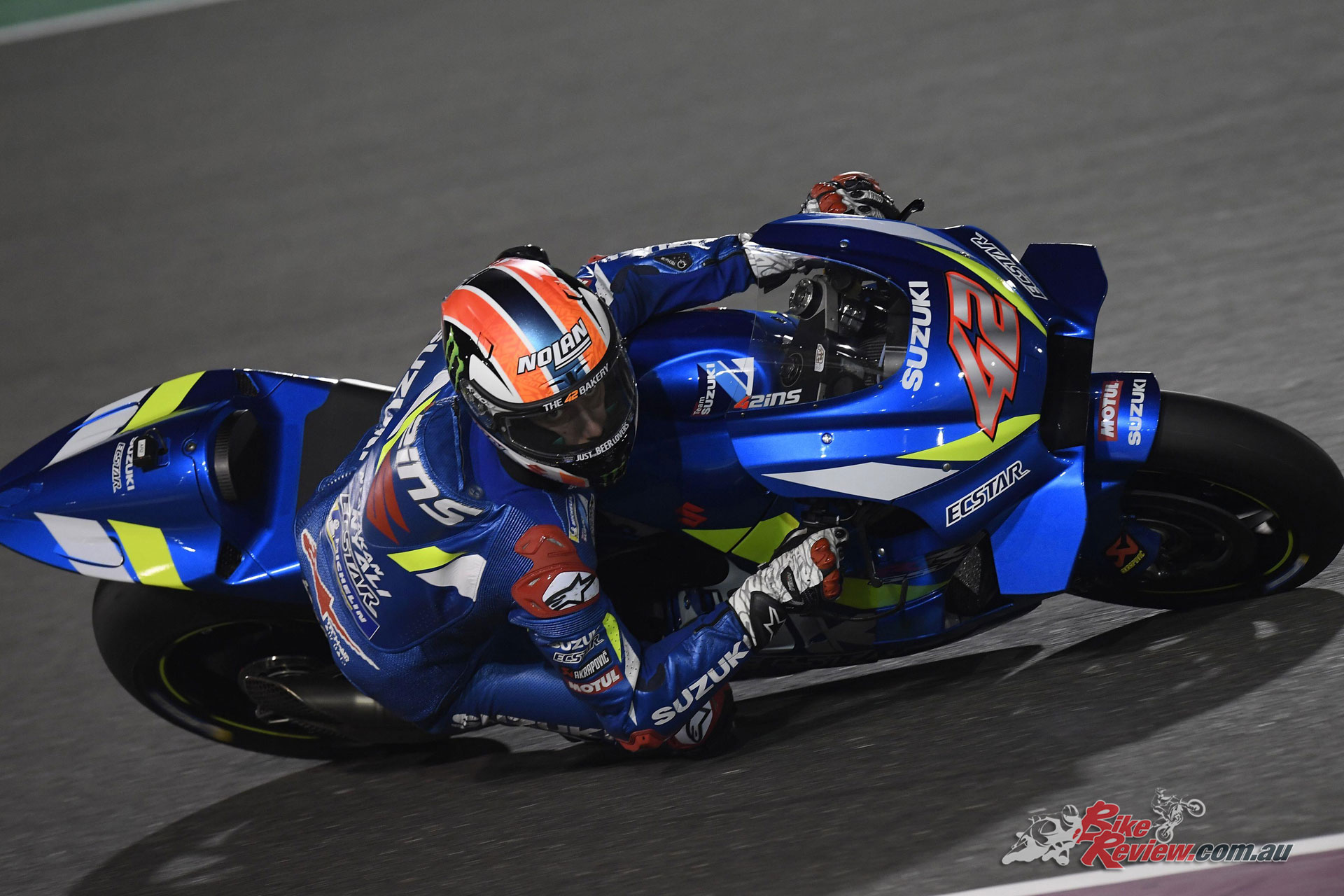 Aprilia, meanwhile, were happy with their improvements and although Andrea Iannone was P16 and Aleix Espargaro P19, they were focusing more on longer runs, for Espargaro especially – and overall across the test Espargaro was P14. The Noale factory were also happy with the adaptation shown by Iannone after the Italian had to sit out much of Sepang with illness, which is a big positive after a difficult recent run. 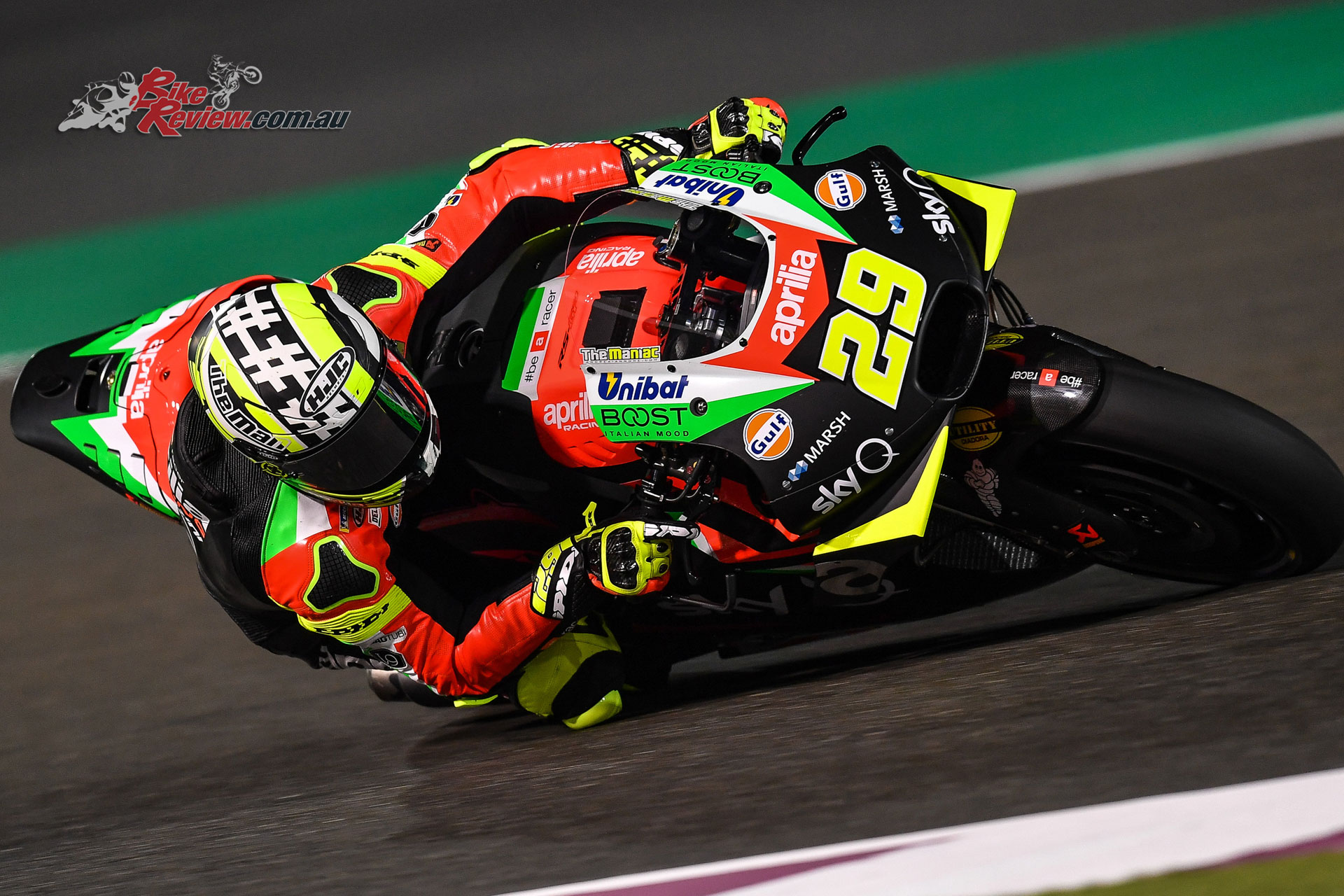 That’s it from Qatar and preseason is officially over – now all that remains is to race. With fifteen riders ending the test within a second, KTM in the top ten, the likes of Quartararo looking incredibly fast…what will the VisitQatar Grand Prix bring? Find out from the 8th to 10th March.