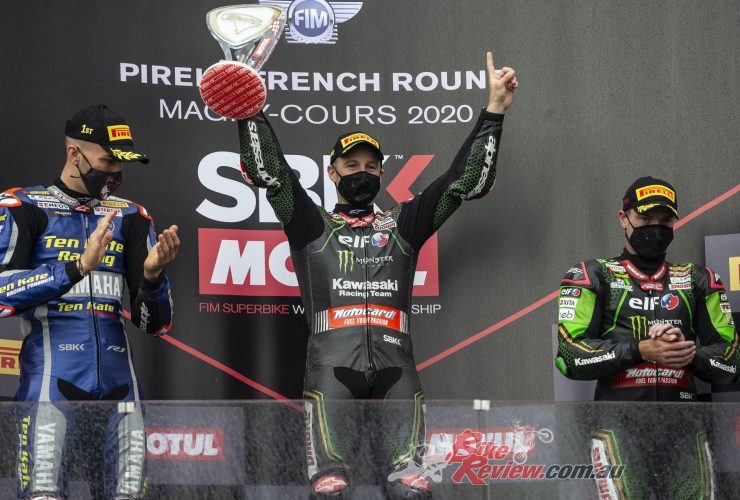 Thrilling action up and down the grid was the order of the weekend for the seventh round of the 2020 MOTUL FIM Superbike World Championship at France’s Magny-Cours circuit. Wet conditions greeted the 21 riders, with Jonathan Rea claiming his 10th victory of 2020 as he inches closer to title number six. – IRPR 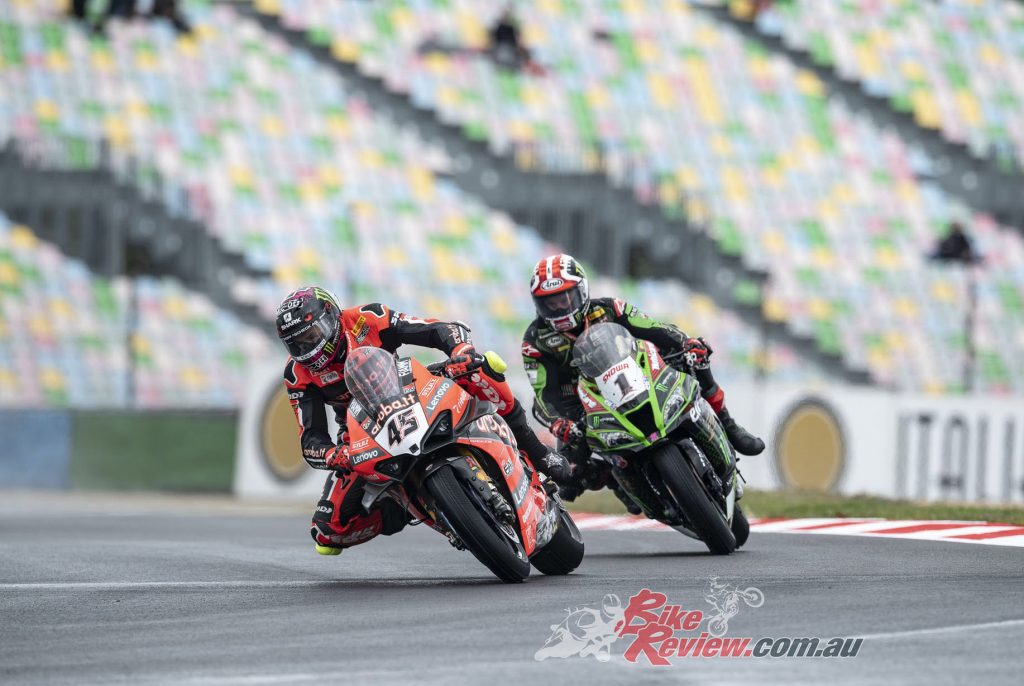 Drama started at turn one as both Tom Sykes (BMW Motorrad WorldSBK Team) and teammate Eugene Laverty retired from the race on the opening lap; Laverty was taken out by a falling Sykes after the British rider was hit by Garrett Gerloff (GRT Yamaha WorldSBK Junior Team).

The incident left Rea, Loris Baz (Ten Kate Racing Yamaha) and Gerloff battling for victory after Gerloff fell back following a mistake at turn five. Gerloff recovered to third place but a crash at the turn 6-7 Nürburgring chicane forced him to retire; the American star taken to the medical centre for a check-up. It meant Rea and Baz duelled it out for victory with Rea coming out on top by around three seconds while Baz secured his first podium at Magny-Cours. Alex Lowes finished in third place as he secured his first podium since the Australian round. 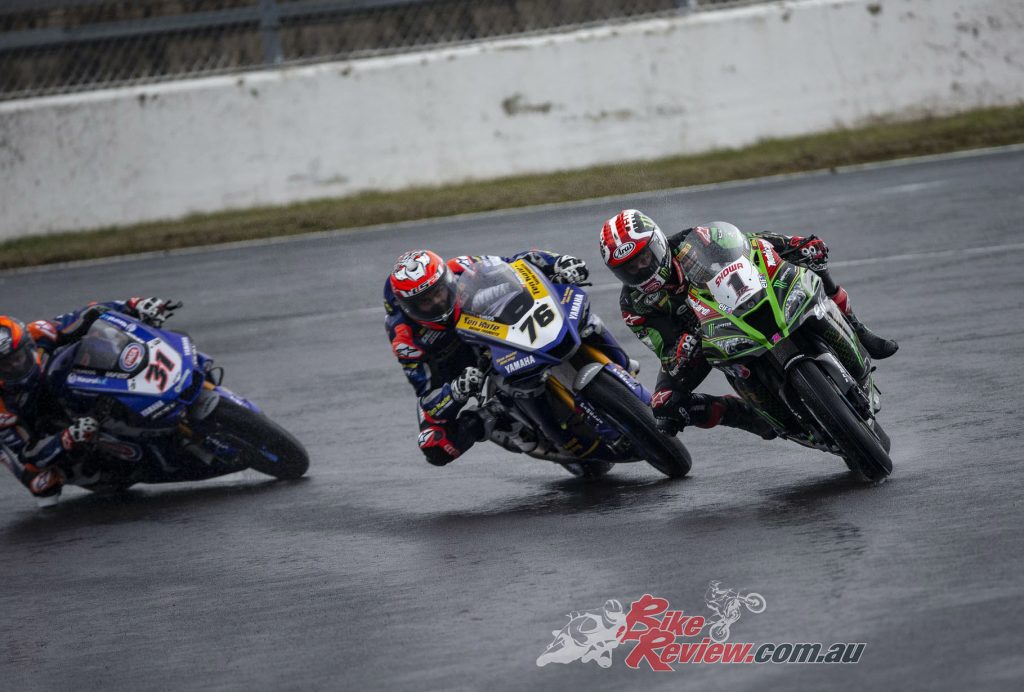 Chaz Davies (ARUBA.IT Racing – Ducati) followed up his victory at Catalunya with fourth at Magny-Cours, continuing his strong season end. The Welshman finished ahead of the battling trio of Toprak Razgatlioglu (PATA YAMAHA WorldSBK Official Team), Leon Haslam (Team HRC) and Scott Redding (ARUBA.IT Racing – Ducati). Redding finished in fifth place ahead of Razgatlioglu in sixth after Haslam passed Razgatlioglu into turn 12 before crashing straight after; Haslam retiring from the race. 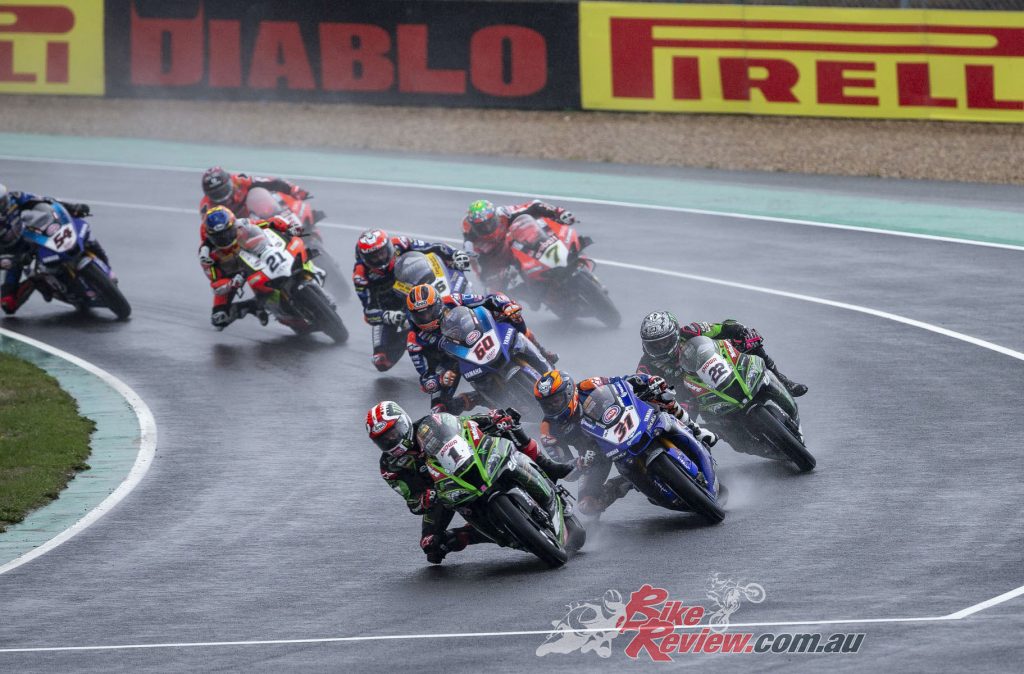 Samuele Cavalieri (Barni Racing Team) finished the race in 16th; equalling his best result of his races in the 2020 season with Takumi Takahashi (MIE Racing HONDA Team) rounded out the classification in 17th place, with Haslam, Gerloff, Sykes and Laverty all retiring from the race. 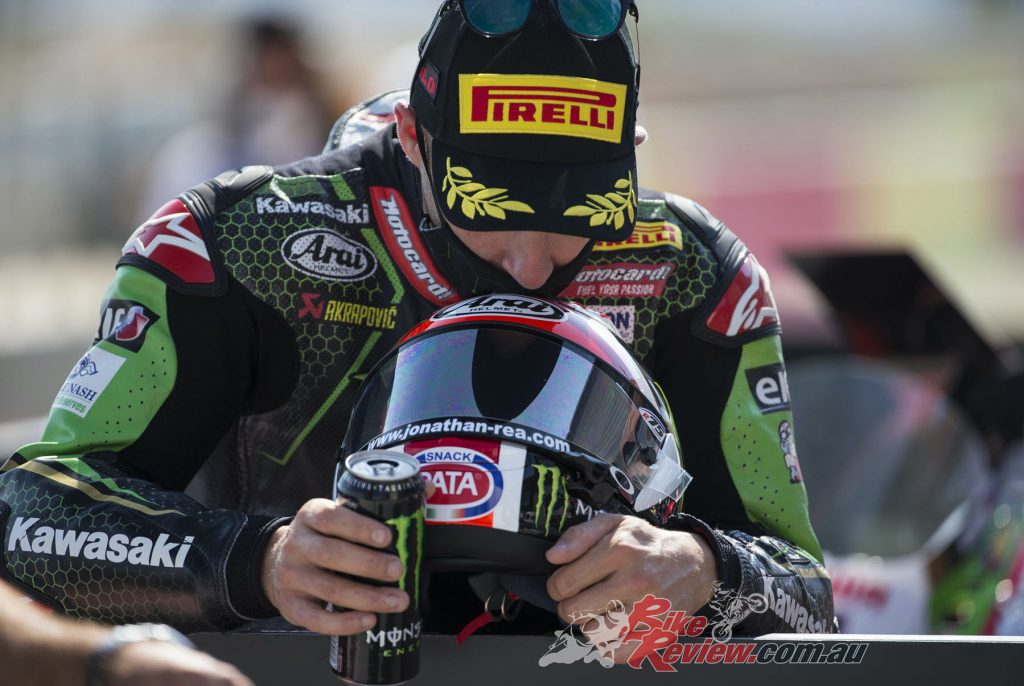 P1 Jonathan Rea (Kawasaki Racing Team WorldSBK): “I felt pretty good out there straight from the get-go, but to be fair Loris and Garrett and Alex were in the group and the pace was incredible. Doing 48, 48, 49, 48. Every time I saw my dashboard, I thought I’d be able to get a gap but they were right there. It was a really fun race, Loris pushed me right to the end. He made a small mistake, I think, with five or six laps to go.”

P2 Loris Baz (Ten Kate Racing Yamaha): “I’m so happy. It was a crazy race. I know I had fantastic pace all weekend, but I took a gamble in Superpole, I went for the intermediate tyre. I just missed out on the right lap by a few seconds, so I was a bit annoyed at that. I had a great race, great pace and tried to be as close as possible. The pace he was putting was crazy, every lap he improved the time and for 12 or 13 laps we were going faster and faster. I had a moment on the kerb going into the last chicane, I lost a second, and then I just tried to manage the gap with Alex and then staying close to Jonny in case he made a mistake. He doesn’t make many mistakes so hats off to him because it’s not easy to put this kind of pace when you’re playing for a Championship. We have some fans here and it’s my first podium at Magny-Cours so I’m happy for them and we try again tomorrow.”

P3 Alex Lowes (Kawasaki Racing Team WorldSBK): “I felt good in the wet all weekend. The start was a bit hectic, Gerloff got a bit too aggressive on the inside and I was lucky to miss that altercation. After that, I felt quite good. I got onto the back of the group and then from about half the race I struggled with the front. It’s been a long time since I was on the podium, so I had to manage the second part of the race. I’m happy to be back up here!”

Rea had started from third place but assumed the race of the lead by Turn 2 and from there he took a commanding victory for his 99th WorldSBK win in his 300th race in the category. Lowes finished in second place as KRT finished first and second; Lowes securing his second podium of the weekend. Michael van der Mark (PATA YAMAHA WorldSBK Official Team) completed the podium with the Dutchman bouncing back from a Race 1 crash to secure his seventh podium of the season. 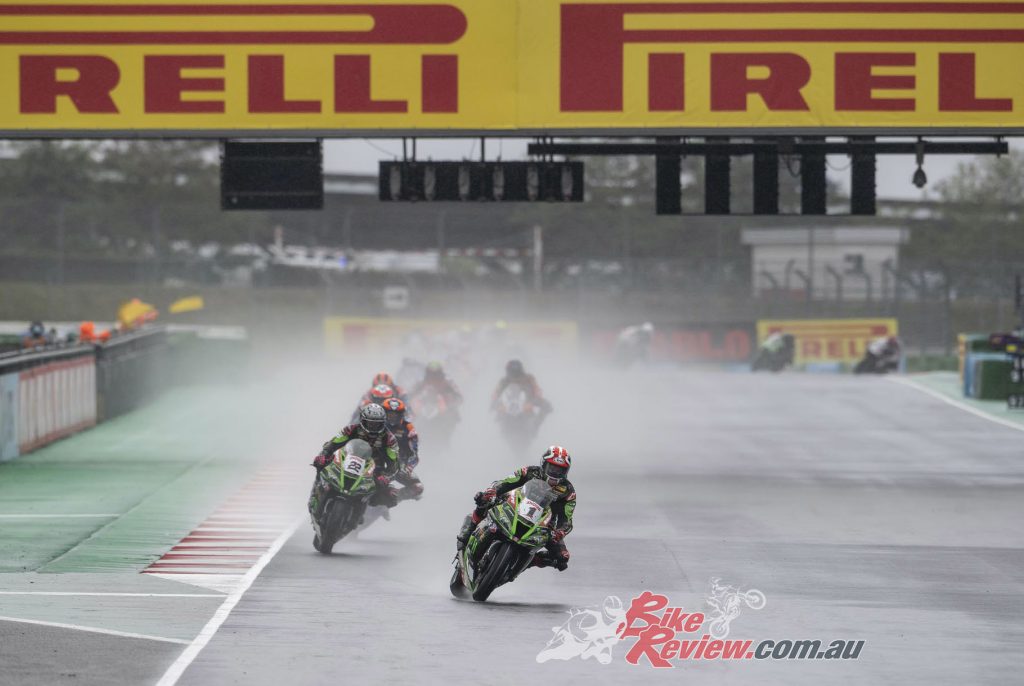 Scott Redding (ARUBA.IT Racing – Ducati) moved up the grid from tenth place to finish in fourth with the British rider putting van der Mark under pressure in the latter stages; the duo battling into Turn 15 on the final lap with van der Mark coming out on top. He finished four seconds clear of teammate Chaz Davies, with Loris Baz (Ten Kate Racing Yamaha) completing the top six. 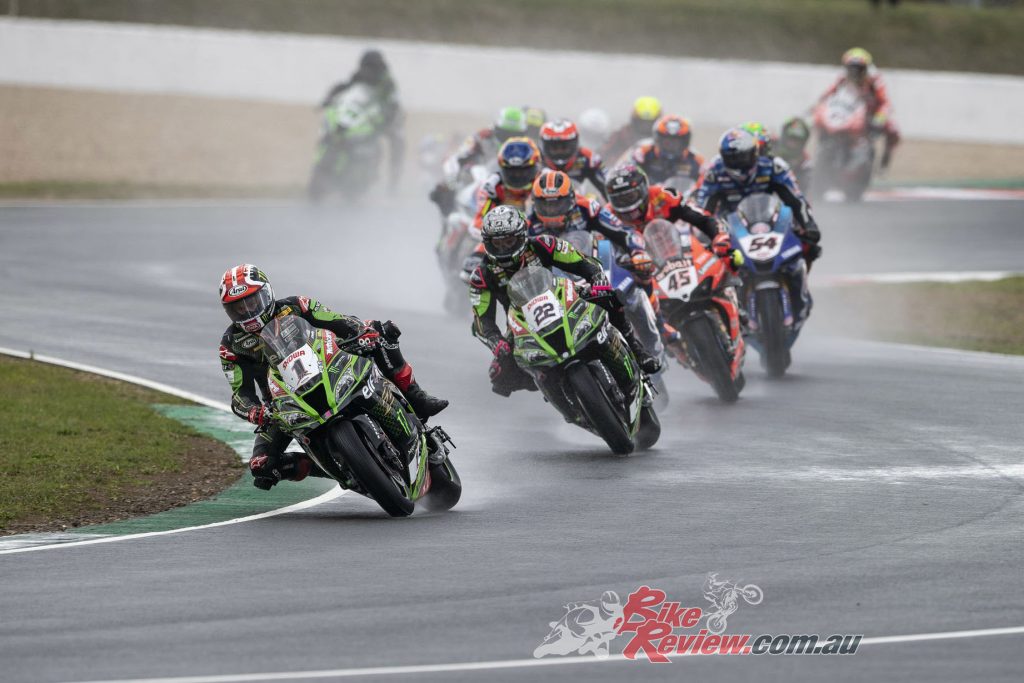 The BMW Motorrad WorldSBK Team duo, Eugene Laverty and Tom Sykes, had started the race from first and second but finished out of the points; Laverty down in 15th and Sykes in 20th after taking a trip through the pitlane, while Federico Caricasulo (GRT Yamaha WorldSBK Junior Team) crashed out of the race at turn 15.

Race Two
The fight for the 2020 MOTUL FIM Superbike World Championship will head to the season finale as Scott Redding (ARUBA.IT Racing – Ducati) claimed victory from fourth on the grid in race two at France’s Magny-Cours circuit with Jonathan Rea (Kawasaki Racing Team WorldSBK) finishing in fourth after starting from pole position.

Rea had led from the start of race two before Redding had made his way to the front battle. The Ducati rider passed Rea on the fourth lap of the 21-lap race to take charge, dominating the race through to the flag and securing a valuable 25 points in the championship battle. Redding was joined on the podium by Loris Baz (Ten Kate Racing Yamaha) as the home hero claimed his second podium of the French round, with Chaz Davies (ARUBA.IT Racing – Ducati) competing the podium. 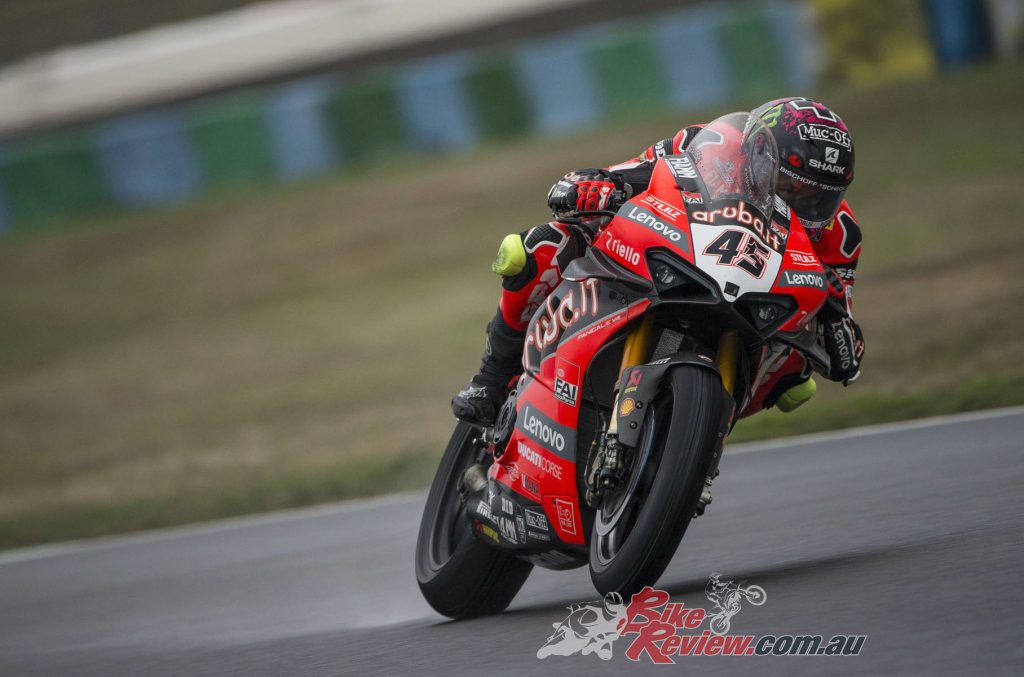 Davies made the title-denying pass on lap 14 as he pushed Rea down into fourth place, meaning Rea leads Redding by 59 points with 62 points available in the remaining three races. Rea had tried to fight back in the latter stages of the race to secure the championship at Magny-Cours but Davies was able to stay ahead. 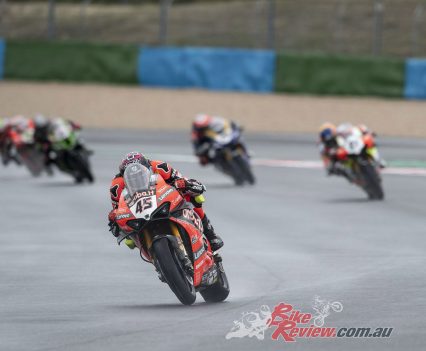 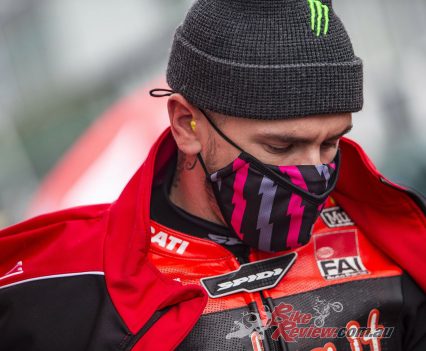 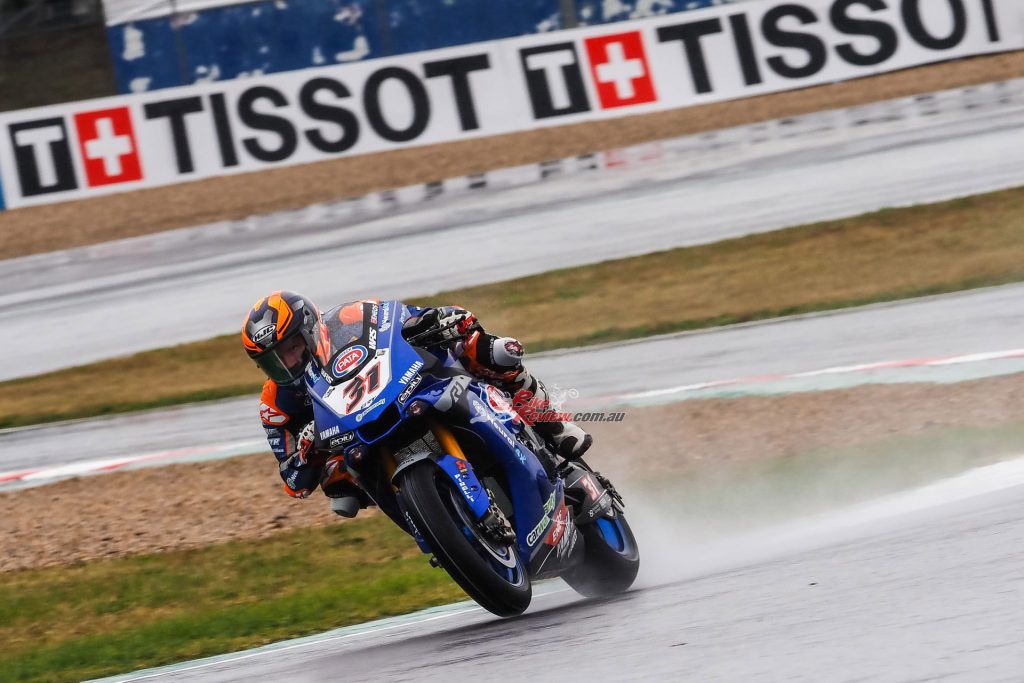 P1 Scott Redding (ARUBA.IT Racing – Ducati) “I was on the back foot all weekend because I didn’t have the laps on the rain tyres, but I was getting faster and faster. With the setting of the bike that was holding me back a little bit, I said to the team that if we could get this fixed, I think I can fight for the win. From the first and second lap, I saw I had the pace. The second problem was how long would the Pirelli last in these conditions as I had no idea. I was trying to ride as smooth as possible but, in the end, I did everything to win today.”

P2 Loris Baz (Ten Kate Racing Yamaha) “I’m really happy. I have to thank my team, especially my crew chief because he gave me the confidence to choose the hard tyre on the grid. He wanted me to choose that one for the Superpole Race and I didn’t listen. It was a hard race. I was expecting to struggle a bit more at the beginning, but I had a good pace coming through the pack. I tried to overtake Jonny as soon as possible but Scott had something more and hats off to him.”

P3 Chaz Davies (ARUBA.IT Racing – Ducati) “It was a great race. Good to round this wet weekend off on the podium. A lot of pressure on that last lap, I knew what was on the line for Scott. I knew the points situation for him. And also, for myself, I knew van der Mark was sitting fifth in the race and obviously the main thing for me is to try and consolidate third in the Championship. A bit of pressure for me and for the team. Happy to bring it home on the podium. I felt really good out there, the bike was feeling really good. A great end to the weekend.”