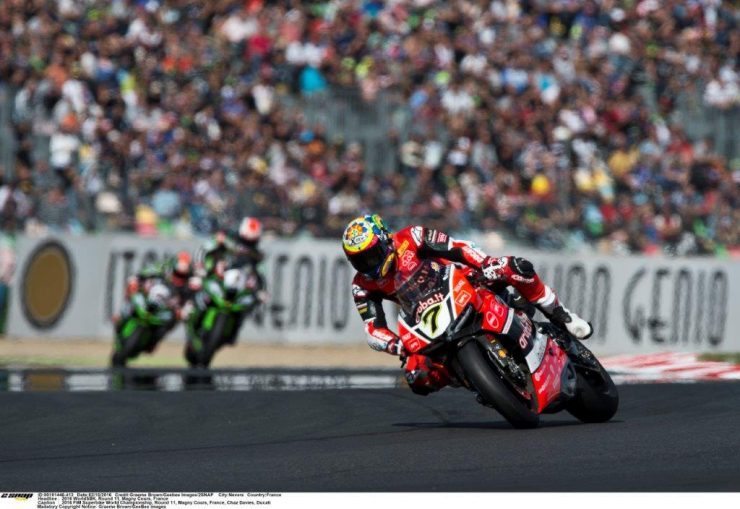 Ducati’s Chaz Davies takes the double at France’s Magny-Cours in round 11 of the World Superbike Championship elevating the Welshman to within 33 points of Kawasaki’s Tom Sykes on 2nd.

Championship leader, Jonathan Rea with a 4th and 2nd at the French round holds a 48 point lead over team mate Sykes, with the field now heading to the penultimate round at Jerez. 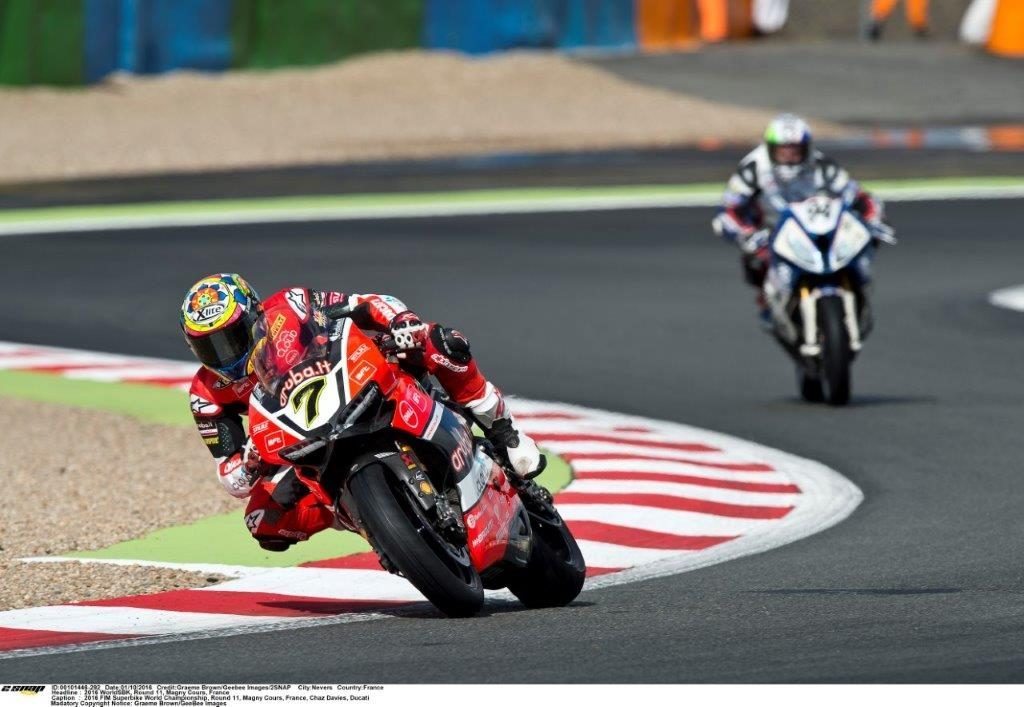 With a wet track at the start of the race, most riders opted for wet compounds, but Chaz Davies gambled on intermediates which eventually proved to be the ideal choice.

Davies played defence early on the slippery track, and was momentarily pushed out of the top ten, but mounted an impressive comeback as his opponents were forced to pit for tyre changes to cope with drying track conditions. Davies took the win with a ten-second advantage to seal his sixth victory of the season, a personal record.

Starting on a damp circuit, it was polesitter, Jonathan Rea, who took the holeshot, leading into the first corner with teammate Tom Sykes hot on his tail, as the sun began to shine at Magny-Cours. Honda’s Michael van der Mark showed his prowess in the mixed conditions finding grip on the outside where no one else could, to make up two positions, as teammate Nicky Hayden followed his lead close behind.

By the end of the first lap Sykes had taken the lead from teammate, Rea, as the two Hondas closed in. As the battle heated up at the front between the two Kawasakis and the two Hondas, MV Agusta Reparto Corse rider Leon Camier closed in. With his MV Agusta running at its peak Camier was relentless, hunting down the leaders in a couple of laps and pulling away to take the lead.

By lap 7 the track was almost dry and Hayden was the first man into the pits for a tyre change, followed a few laps later by the KRT duo who were struggling with grip on the drying track.

Camier’s stint at the top was short lived as IodaRacing’s Lorenzo Savadori overtook him. A rush of activity in the closing laps saw Ducati’s Chaz Davies catch up and steal the lead from the young Italian.

Once in front, Davies was unstoppable and went on to win ten seconds clear of second placed Michael van der Mark, who stayed consistent throughout the race. KRT duo Tom Sykes and Jonathan Rea pushed to make up for lost time spent changing tyres to finally finish in third and fourth respectively.

Savadori finished in fifth ahead of first Frenchman home, Mattieu Lagrive for Pedercini Racing in sixth. Leon Camier came home in seventh after his intermediate tyres lost their grip on the dry track.
Barni Racing’s Xavi Fores ended the day in eighth ahead of Pata Yamaha’s Sylvain Guintoli in ninth, while IodaRacing’s Alex De Angelis closed out the top ten.

Yamaha’s Alex Lowes put in a solid effort to finish in P11 after his crash in yesterday’s practice saw him limping. 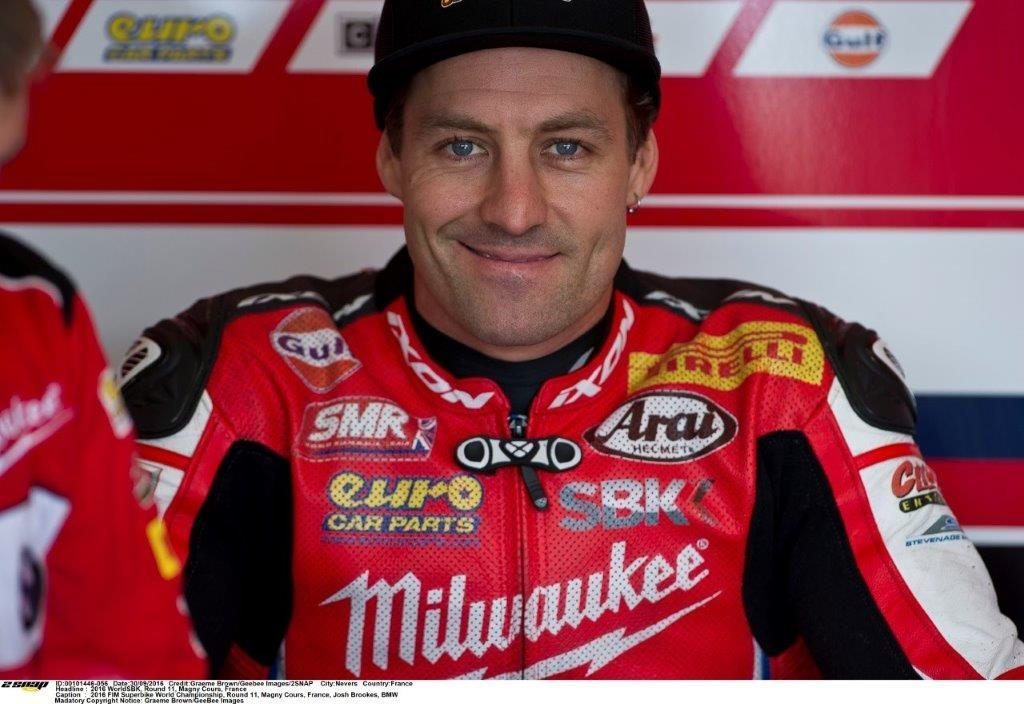 Davide Giugliano was declared unfit to race after a crash during Superpole 1, which aggravated his right-shoulder injury. 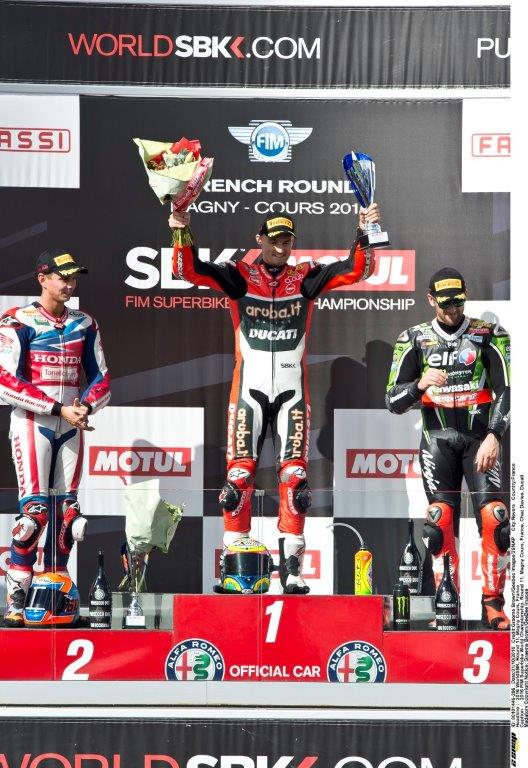 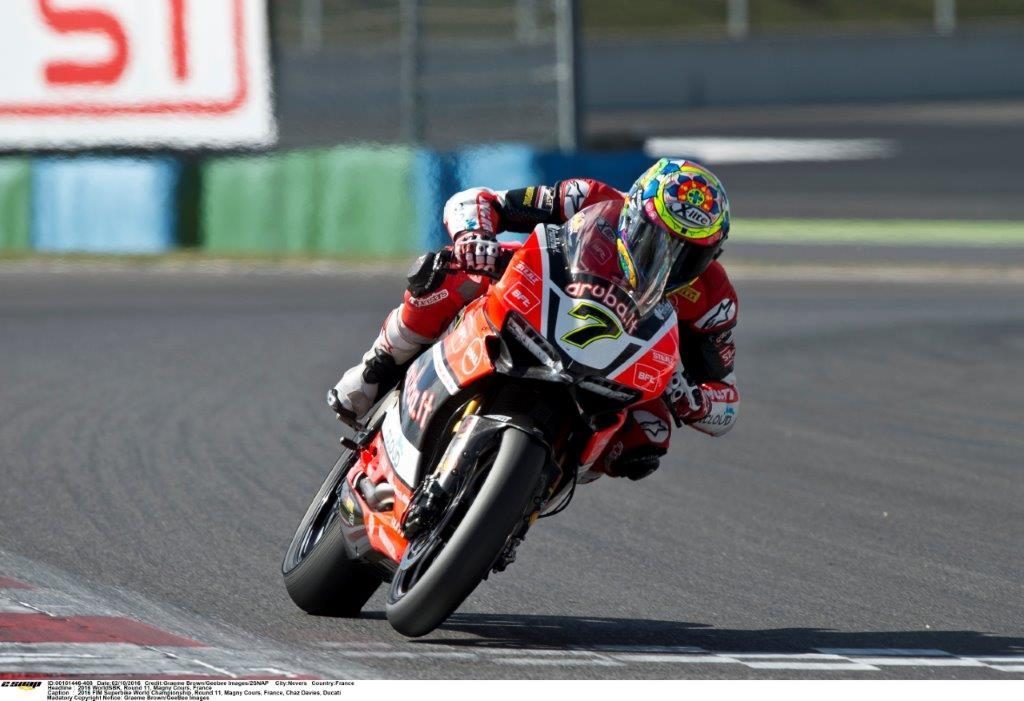 Sunday saw the field greeted with almost perfect conditions for race two of the Magny-Cours world superbike round, with Ducati’s Chaz Davies stealing the show once again to take the double for a fifth time in his career. Kawasaki Racing Team’s Jonathan Rea and Tom Sykes put on an incredible show battling for the podium to finish in second and third.

“It wasn’t easy at all today,” said Davies post race. “I took the opportunity when it came, but honestly I didn’t think it was going to happen. I was struggling early on, doing the same pace as on Friday in the mid 1’38 mark. I was also finding it hard to pass the Kawasakis, as I couldn’t see where to do it unless I took a big risk, so I had to let the race come to me a little bit.

“It did eventually, and as Jonathan and Tom pushed each other wide at the hairpin, I just took the opportunity and dropped the hammer to put some distance in between myself and them. It’s been one of the most important weekends of my career, because we won in very different conditions, reaping the fruits of a lot of hard work with the whole team.”

The opening lap saw pole man Jonathan Rea rush ahead to lead into the first corner, with Chaz Davies right behind. Tom Sykes swooped around on the second corner to steal the lead and pull away while Davies took second. With a three way English fight out the front, MV Agusta’s rider Leon Camier and Honda’s Michael van der Mark were left behind to fight it out for fourth.

Sykes was unbeatable setting a new lap record early on as he took his Kawasaki to its limit, putting seconds between Davies and teammate Rea. But it wasn’t long before Rea slipped passed Davies to begin the hunt for Sykes.

The last five laps of the race saw an intense battle between the two Kawasakis as the lead alternated from Rea to Sykes, with many tight overtaking moves keeping French fans on the edge of their seats. An almost impossible overtaking attempt by Sykes on Rea saw Davies take advantage of the opening and shoot ahead with a couple of laps to go. Once in front the Welshman didn’t look back until the chequered flag saw him secure his second win at the French round.

Leon Camier eventually beat van der Mark to fourth with the Dutchman taking fifth ahead of IodaRacing’s Lorenzo Savadori. While further down the order PATA Yamaha’s Sylvain Guintoli tried to hold off Honda’s Nicky Hayden, Xavi Fores and Althea BMW’s Jordi Torres in a battle of their own, but eventually lost the fight and finished in eighth. Torres finished ahead of the Frenchman in seventh and Hayden ended the battle in ninth, with Fores rounding out the top ten. 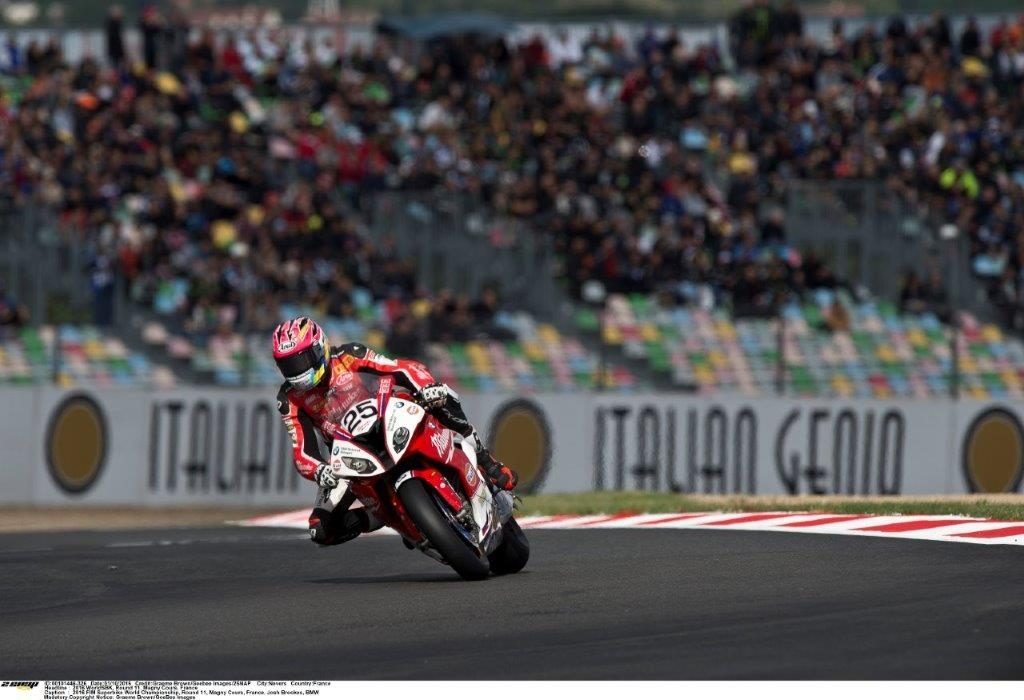 With Sykes taking away important points from teammate Jonathan Rea, the 2016 MOTUL FIM Superbike World Championship fight goes to Round 12 in Jerez on the 14th-16th of October, with only 48 points separating them. 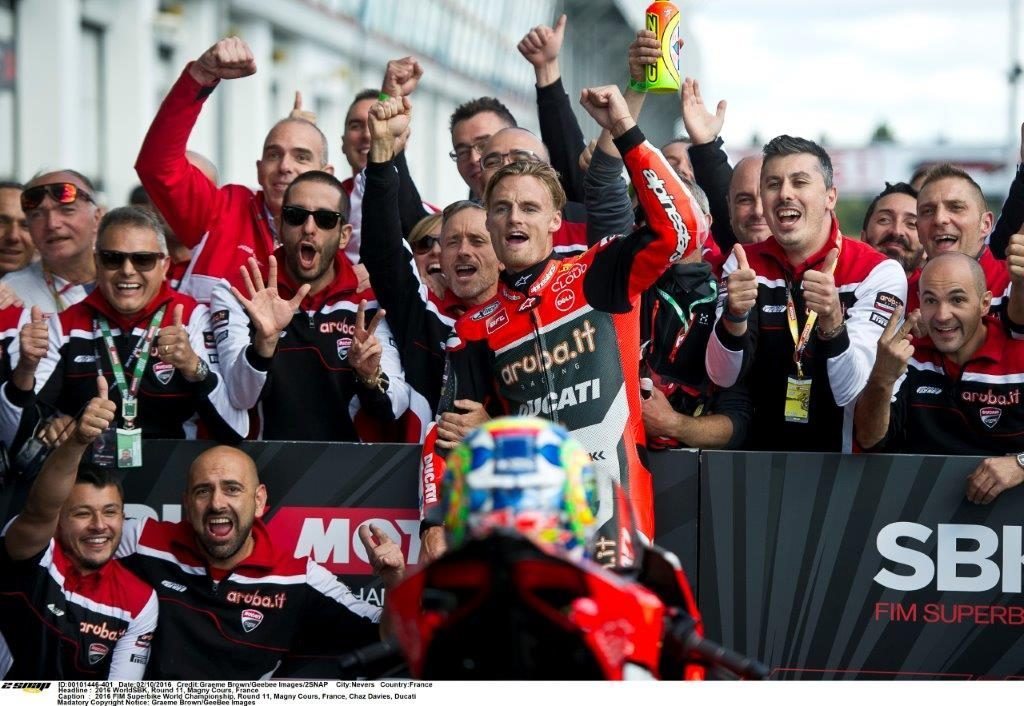 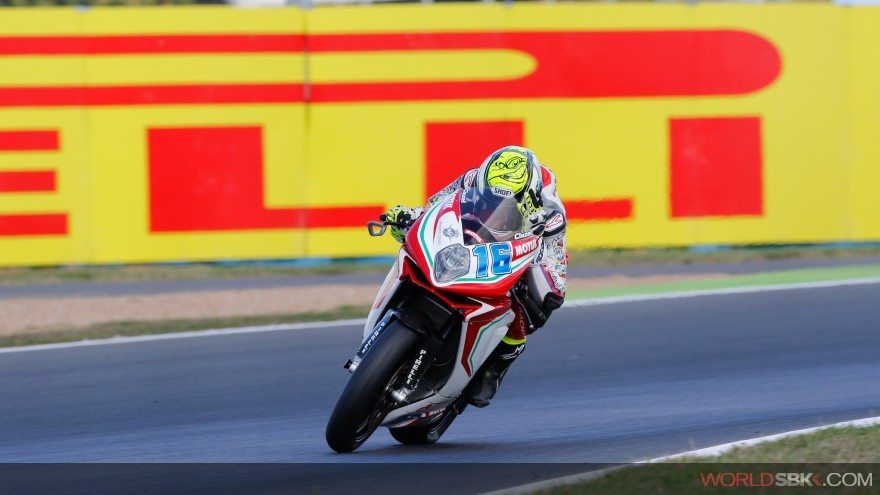 Sofuoglu pushed ahead at the front trying to put space between him and his rivals but he couldn’t get away from MV Agusta Reparto Corse’s Jules Cluzel. The Frenchman overtook Rea in second and before long was hot on Sofuoglu’s tail, not letting him get away.

It took Kallio Racing’s Niki Tuuli a few laps to get to grips with the track but once he did the young Finn took the challenge straight to the front putting pressure on both Cluzel and Sofuoglu, with the reigning world champion desperately trying to hold them off. Not long after on lap eight, Gino Rea pushed too hard on the entry of Estoril Corner and was flicked off his bike, ending his race early.

Then on lap 12 disaster struck as Kenan Sofuoglu who was in a position to win his fifth world championship crashed out on turn three, while his chance at sealing the title at the French round slid away with him. Tuuli instantly took advantage of this, to overtake second placed Cluzel and take lead.

Then a last lap duel saw Cluzel take fuel from his home fans. He stole the lead and went on to win, causing the crowds to go wild. Axel Bassani (San Carlo Team Italia) came home in fourth, adding to his lead in the FIM Europe Supersport Cup, which will be decided in Jerez.

The 2016 FIM Supersport World Championship will now go down to the wire at the next round in Jerez where reigning world champion Kenan Sofuoglu will have another shot at sealing the title.