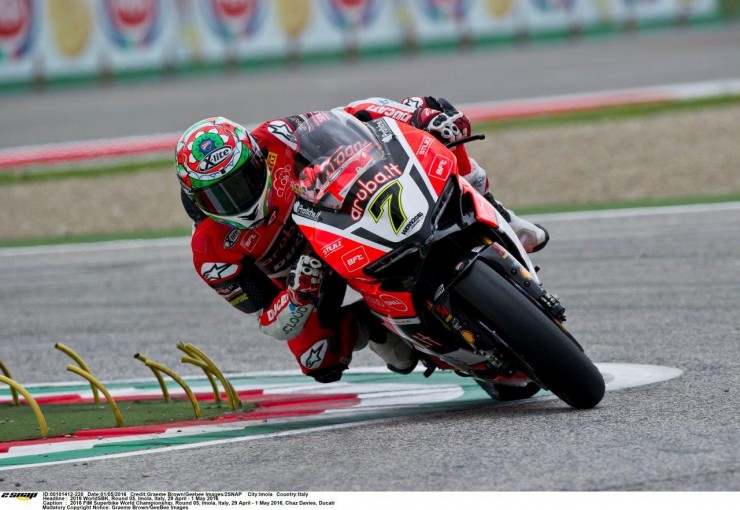 WSBK: Davies and Ducati do the Double at Home

Chaz Davies had a winning weekend taking the double for Ducati at Round Five of the World Superbike Championship at Imola, Italy. 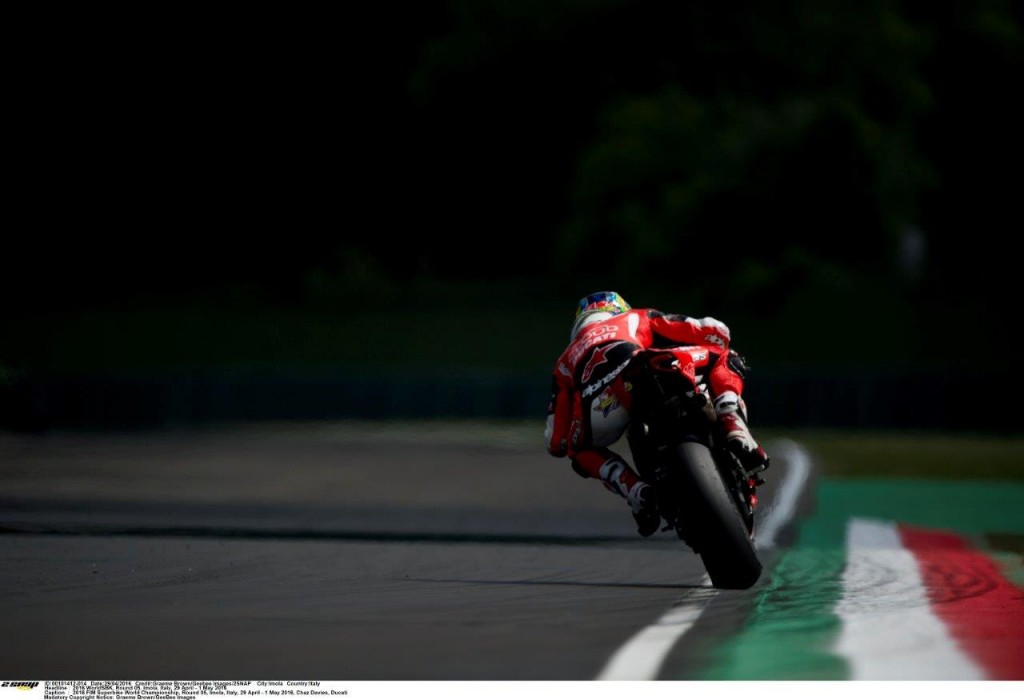 A stunning performance from Ducati rider Chaz Davies saw him take a comfortable victory in race one at Imola, as Kawasaki pairing Jonathan Rea and Tom Sykes were left to fight it out for the other podium positions.

It was Davies and Rea who got the best starts from the front row of the grid, with the biggest loser off the line proving Davide Giugliano. With Davies leading the charge to escape, it was left to Rea, the only man seeming able to stay in touch with the Ducati rider, to try and chase him down.

With ten laps remaining, Rea ran wide at turn one and the gap to teammate Sykes suddenly closed, with the KRT riders facing another inter-team battle as the Yorkshireman tried to stay in touch. Rea, cool under pressure as ever, managed to recover his rhythm and hold off his teammate to the line to minimize the damage in the championship after a close challenge on the last lap.

Jordi Torres, who scored his first WorldSBK podium at Imola in 2015, had a stunning run for fourth on his Althea BMW machine at the team’s home race, ahead of second Aruba.it Racing – Ducati rider Davide Giugliano. Leon Camier, after a race of some ups and downs, crossed the line in sixth for another fantastic haul of points for home manufacturer MV Agusta.

Lorenzo Savadori on the Aprilia ran in the top five throughout the first part of the race, before the rookie succumbed to the pressure of riders behind. Michael van der Mark, after a difficult Superpole 2, was the winner of the battle for seventh and headed Savadori over the line, who saw the chequered flag in eighth just ahead of Imola rookie Nicky Hayden on the second Honda. Xavi Forés made up ground in the race on his Barni Racing Team Ducati to lock out the top ten, just ahead of Alex Lowes after a difficult weekend for the Pata Yamaha squad.

Baiocco, Reiterberger, Brookes and DeAngelis completed the points scoring positions, with DeAngelis still suffering with an injury to his left hand at the round closest to home for the San Marinese rider. 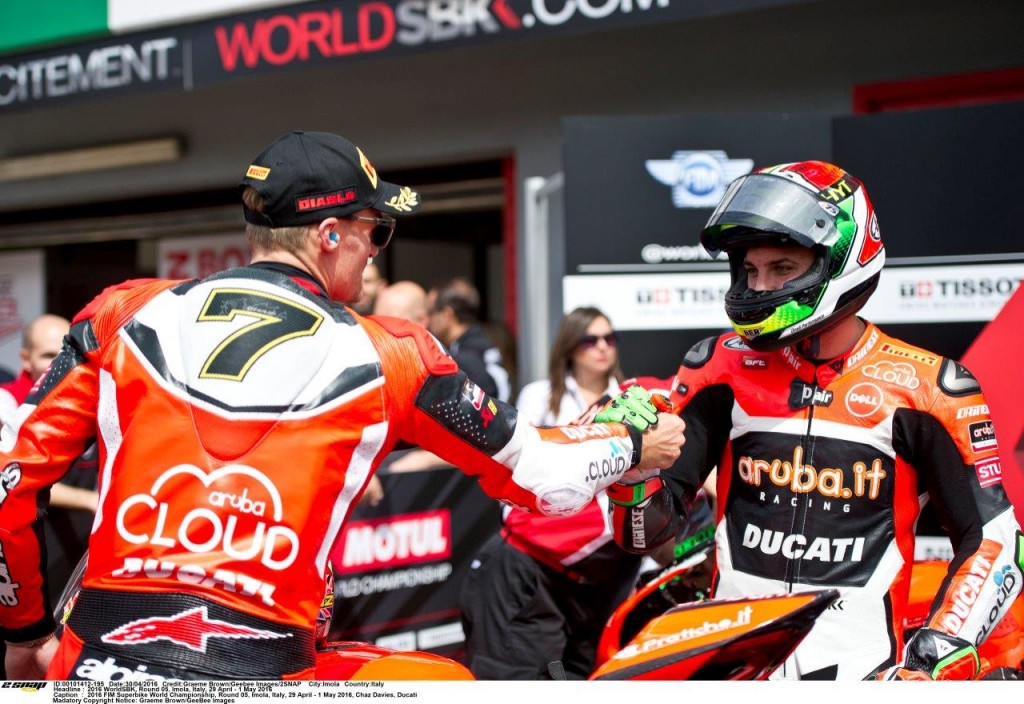 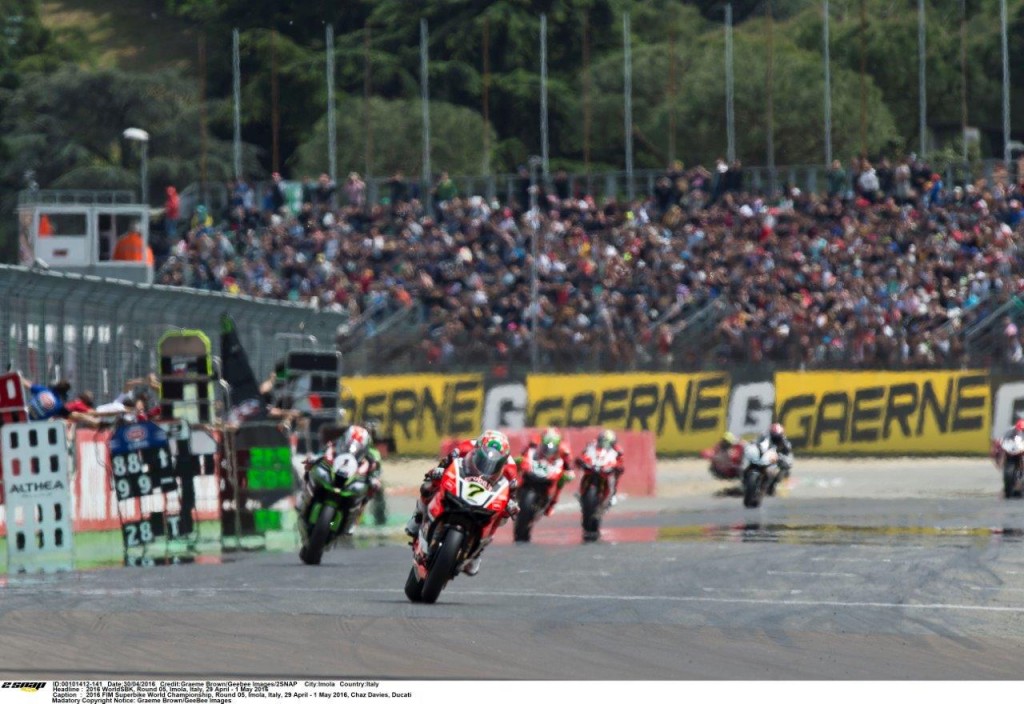 Ducati title challenger Chaz Davies threw down the gauntlet to championship leader Jonathan Rea in race two at Imola as the Welshman again led off the line from pole and took a commanding victory.

Under worsening skies at the Autodromo Internazionale Enzo e Dino Ferrari, the WorldSBK grid got away on a dry track with Davies leading off the line and the two KRT riders once again able to leapfrog second Aruab.it rider Davide Giugliano.

With a few moments for Rea on track that saw him lose touch with leader Davies, the reigning Champion held it together to get another big haul of points towards his title defence. Sykes kept close to his teammate for the majority of the race, but was unable to make a pass on the daunting 4.9km of Imola.

Davide Giugliano was the lead home rider on the second Aruba.it machine, and started from the middle of the front row to come home in P4, making an improvement on his Saturday result of P5. Leon Camier brought more home glory for the host nation as the Brit rode his MV Agusta to another top 5 finish after a best of P4 recently for the Italian manufacturer, adding more points to the ever expanding tally and completing their first weekend of points scoring finishes at the Autodromo Internazionale Enzo e Dino Ferrari.

Alex Lowes, after a difficult Superpole 2, fought his Pata Yamaha YZF R1 up into the Top 6 after succumbing to Camier, in front of Jordi Torres as the Catalan Althea BMW rider was left outside the top ten near the start of the race and pulled off an impressive recovery ride. Lorenzo Savadori on his Aprilia made sure there was representation for every manufacturer in the top 8 at Imola, before suffering a problem on the last lap and being relegated to P11 over the line.

Honda duo Nicky Hayden and Michael van der Mark ended the second race of the weekend in P8 and P9 respectively, after a difficult few days in Imola where the Assen podium finishers found themselves further back on the grid than both are used to. Xavi Forés completed the top ten for Barni Racing team on his Ducati, classified ahead of Savadori at the flag.

WorldSBK will now go jet set once again as the paddock heads east to Sepang International Circuit in Malaysia for round six of the 2016 season. 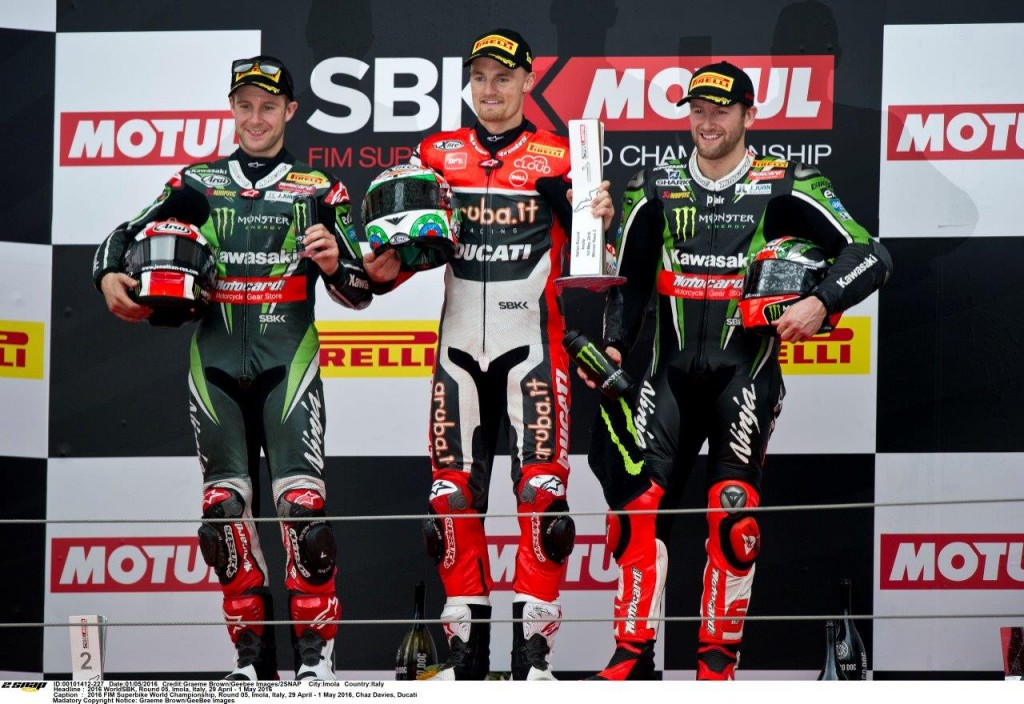 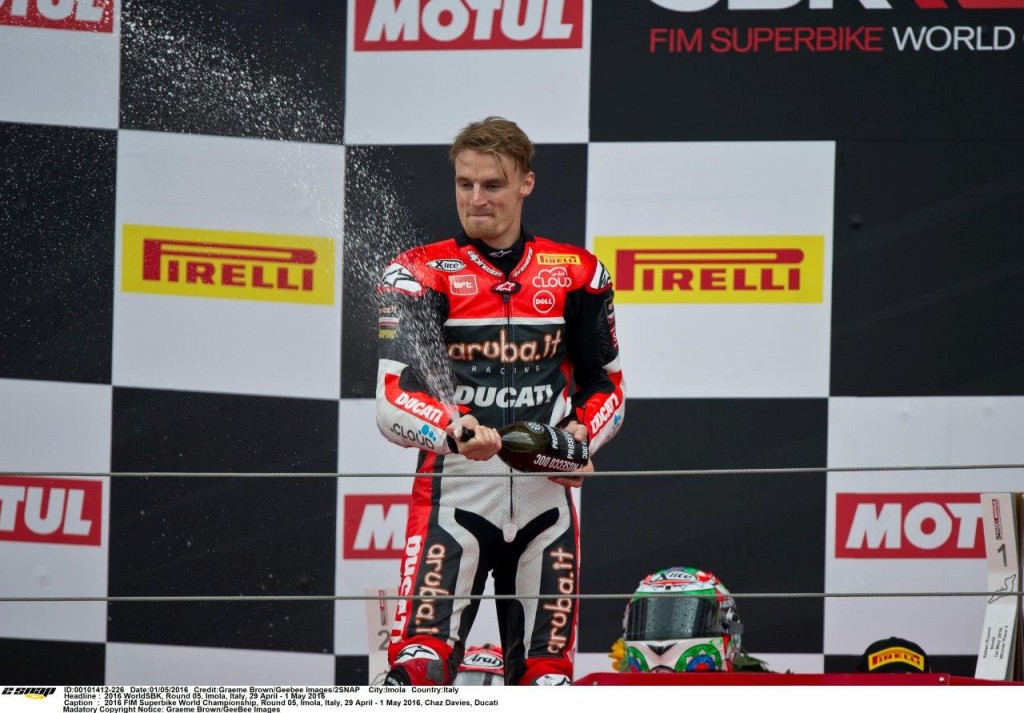 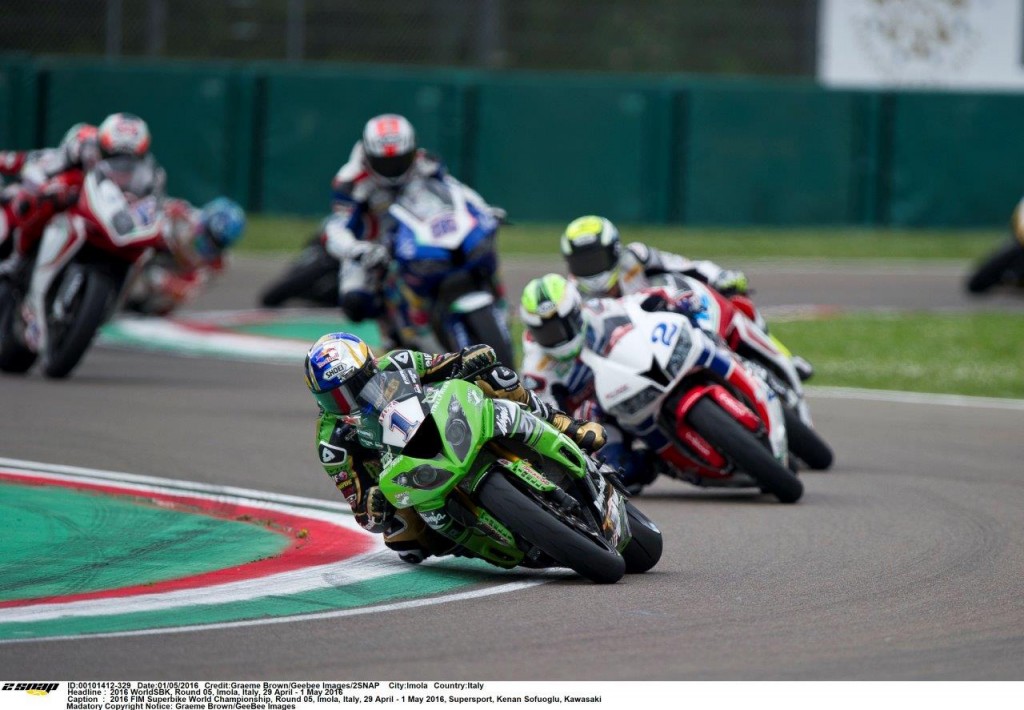 Kenan Sofuoglu has taken victory in round four of the WorldSSP championship at Imola in a race restarted after a red flag, while Jules Cluzel came home in second after a late challenge, leading Honda rider PJ Jacobsen across the line to complete the podium.

Mixed conditions greeted the start of Sunday May 1 at the Italian circuit. With rain overnight and grey skies overhead, warm-up sessions got underway on a drying track and conditions were different for the race. Jules Cluzel started from pole for MV Agusta Reparto Corse in their home race, ahead of Kawasaki Puccetti Racing rider Kenan Sofuoglu and Honda’s PJ Jacobsen on the front row.

Rookie and championship leader Randy Krummenacher started from fourth at the head of the second row, with teammate Sofuoglu starting to close down the points gap.

After a clean start, it was a familiar WorldSSP sight at the head of the train heading through Tamburello, with Cluzel leading Sofuoglu ahead of Krummenacher and Jacobsen on the chase. Soon, however, a problem became apparent on the Puccetti machine of Randy Krummenacher and the race was red-flagged, with the Swiss rider not allowed to take the restart.

Pit lane reopened at 11:45 for a new 11-lap race, with Cluzel leading off the line before Sofuoglu got past and began to pull away, leaving Jacobsen to lead the group hunting him down. Cluzel took some time to recover to his full pace as he struggled to keep third for a few laps, before pulling the pin once again to reel in Jacobsen and set off after old rival Sofuoglu. With only a handful of laps remaining, the Turk proved too far ahead despite Cluzel’s searing last two laps of the Imola circuit.

The Italian challenge was initially headed by Lorenzo Zanetti at home in Imola, as Cluzel’s MV Agusta teammate stayed close to his French rival throughout the race, with Alex Baldolini and Federico Caricasulo in equally close company. Alessandro Zaccone closed on the group however and was again the fastest rider forming part of the FIM Europe Supersport Cup, with the San Carlo Team Italia rider coming home in fifth to head the ESS challenge.

Baldolini came across the line in fourth and Zanetti was forced to settle for a sixth finish at home, ahead of Ondrej Jezek. Federico Caricasulo and Ayrton Badovini crossed the line in eighth and ninth respectively, ahead of Spaniard Nico Terol who locked out the top ten.

Assen podium finisher Gino Rea was a high profile crasher in the race and luckily escaped from an incident at the final chicane, and Kyle Smith, winner in Holland, had a tough race to finish in 11th for CIA Landlord Insurance Honda.

Kenan Sofuoglu now leads the championship after round five, with the next stop for WorldSSP being Sepang International Circuit in Malyasia. 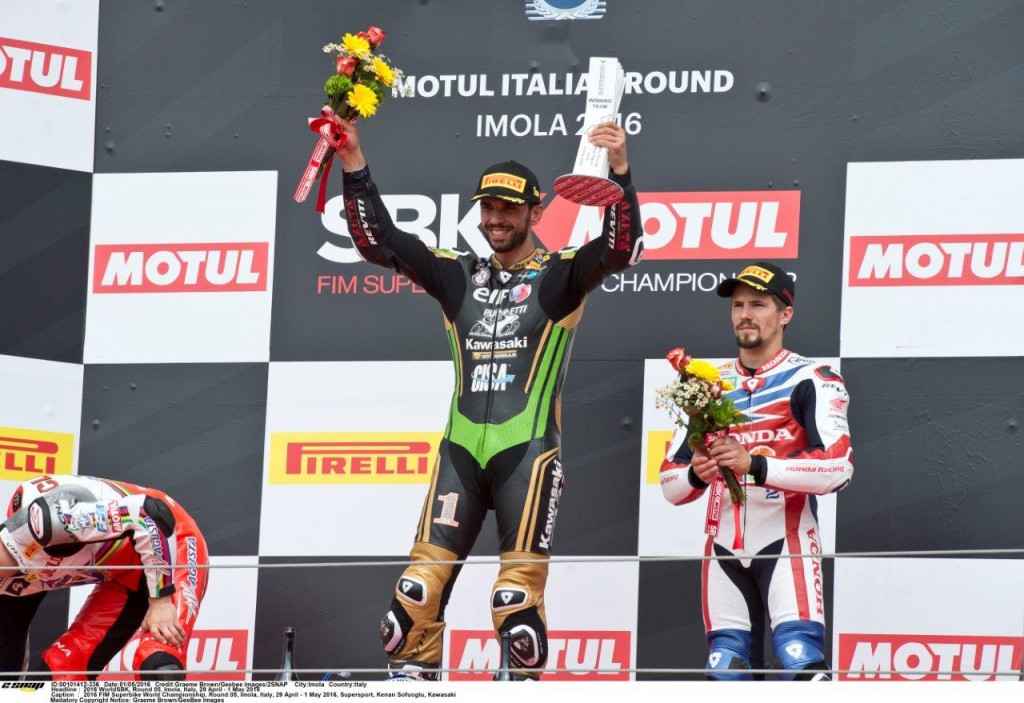