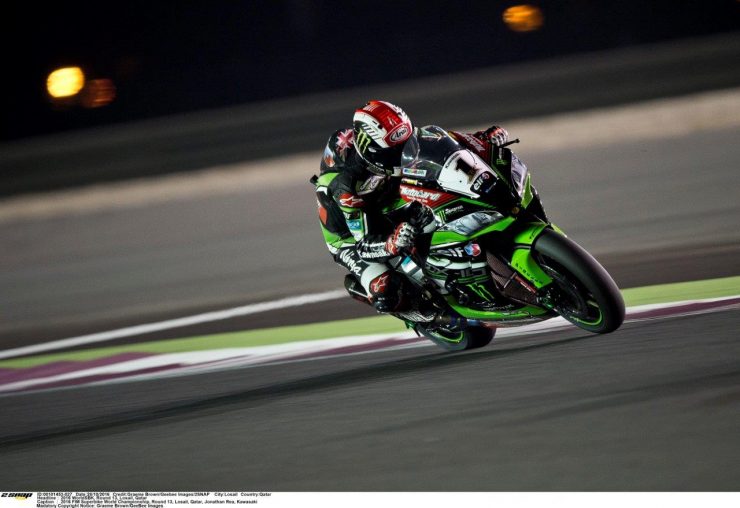 Northern Ireland’s Jonathan Rea has now joined a select group of WorldSBK warriors by winning his second successive championship, completing the magnificent achievement aboard his Kawasaki under the floodlights of Losail International Circuit in Qatar over the weekend (October 29-30). 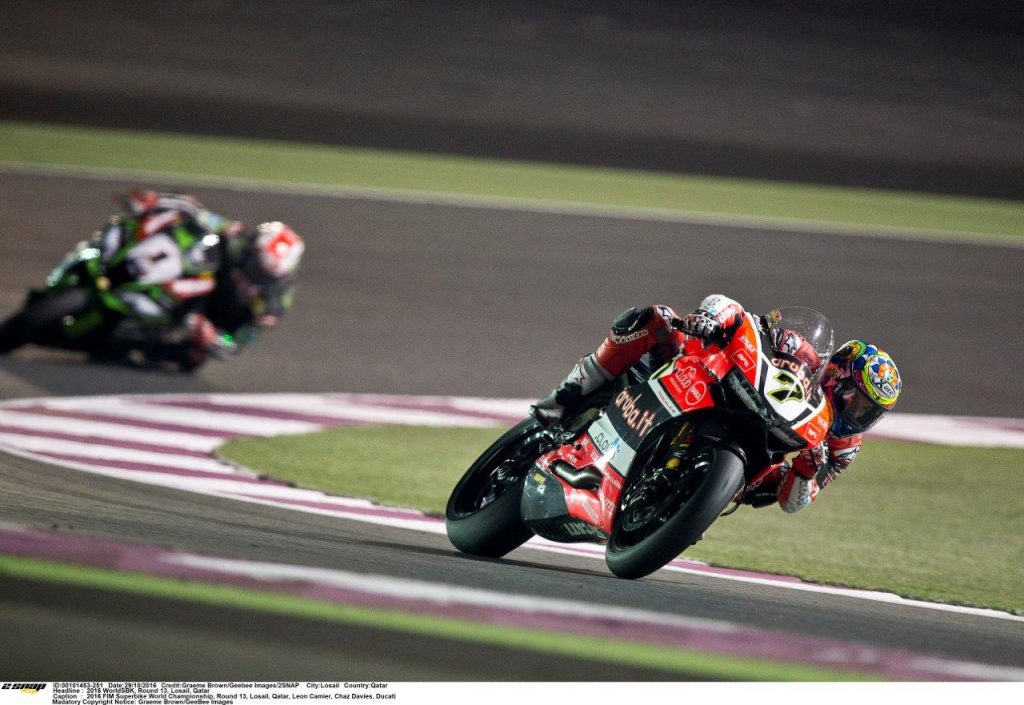 In a final round dominated by Chaz Davies (Aruba.it Racing Ducati), who stretched his tally of wins to six on the trot, 29 year old Rea easily ticked off the 2pts he required to wrap up the title in the opening race on Saturday when he finished in a rock-solid second place.

With the title safe in his keeping, the ‘adopted’ Aussie – his wife hails from Phillip Island – then magnanimously buttoned off in the final stages of race two to allow his teammate Tom Sykes to move into second and secure runner-up spot in the championship ahead of the rampaging Davies.

Rea, whose dominance of the season began way back in February at Phillip Island with a brilliant double win, completed the championship on 498pts, from Sykes (447), Davies (445) and Honda pairing Michael van der Mark (267) and Nicky Hayden (248).

“It is incredible to have won back-to-back championships,” said Rea after race one. “It is very raw right now because I have not had time to take it in, but to have such a year like I had last year – and then this year with the new bike – I think we faced a lot more challenges this time.

“I am really happy and proud of our work because this bike was so new. To win in the first year of a new model is incredible and I want to thank Kawasaki for building such a good base bike. I expect to go from strength to strength.

“It felt like we really had to win the championship this time so I have to thank everybody all around me in the team. I want to thank each and every one of them.” 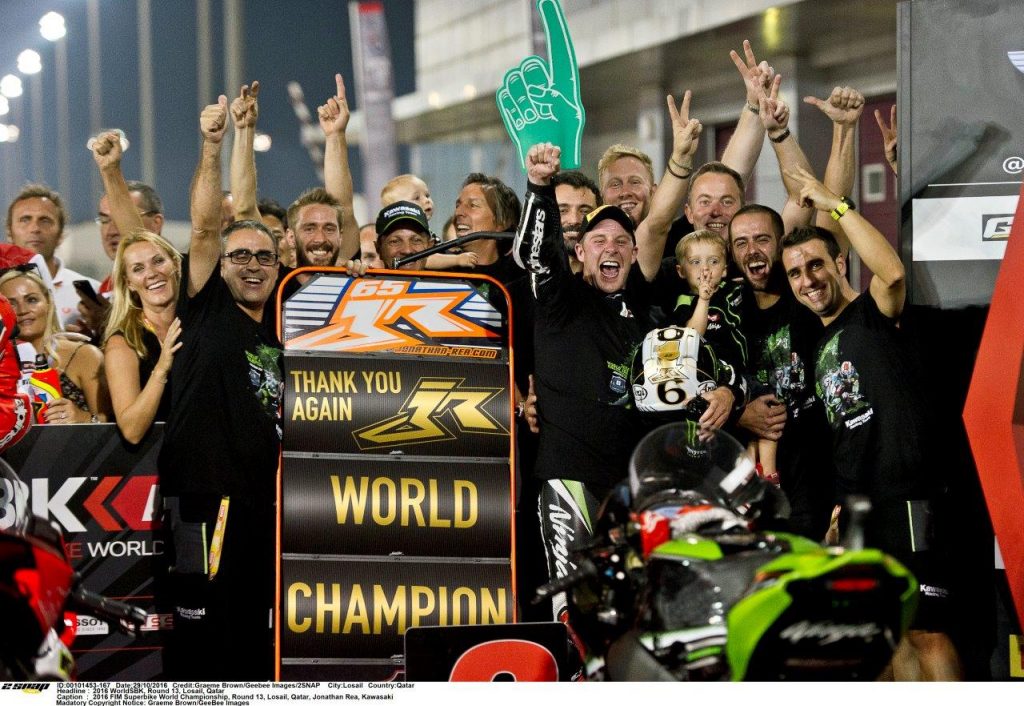 The penultimate race of the 2016 MOTUL FIM Superbike World Championship got off to a shining start under the stars and floodlights of the Losail International Circuit. Davies won the race in dominant style with a 3.9-second margin over the newly crowned world champion, Rea.

Davies got off to a flying start, leading into the first corner with Hayden overtaking Rea on turn one. Rea was quick to fight back and retook his position in second, with his sights set on Davies in first. Championship contender Sykes didn’t get the best start after an uncharacteristically bad qualifying saw him start firth and only make up one place in the early laps.

By lap three, the struggling Yorkshireman was overtaken by Sylvain Guintoli (Pata Yamaha) and dropped back to fifth as his slim title chance melted away. Guintoli’s incredible pace didn’t falter as he pushed ahead to hunt down Hayden who was sitting third. By lap eight the Frenchman overtook him, to settle into Yamaha’s maiden podium position finish for the year.

Sykes found pace a little too late in the race and in the closing laps took fourth place with Hayden in fifth. Xavi Fores (Barni Racing Ducati) finished in sixth with Alex Lowes (Pata Yamaha) ending Race one in seventh. 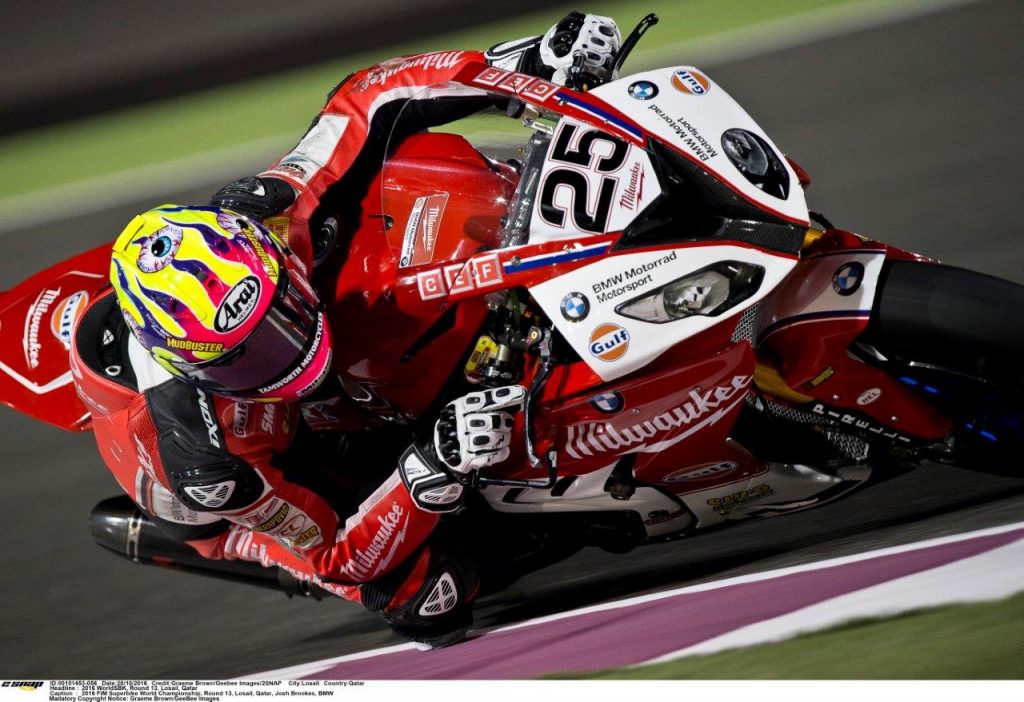 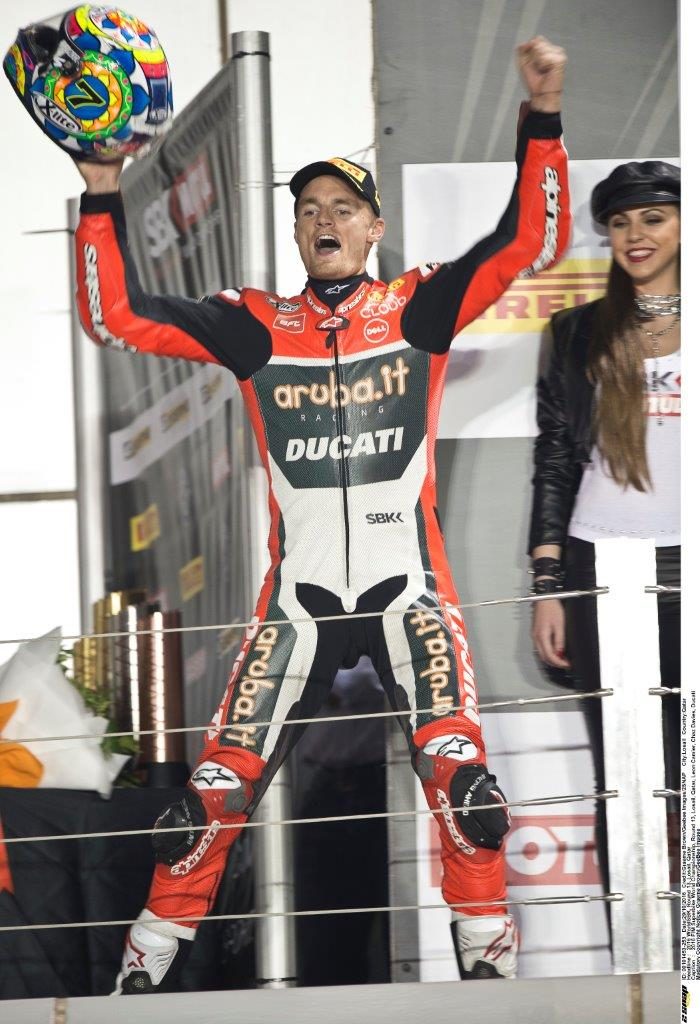 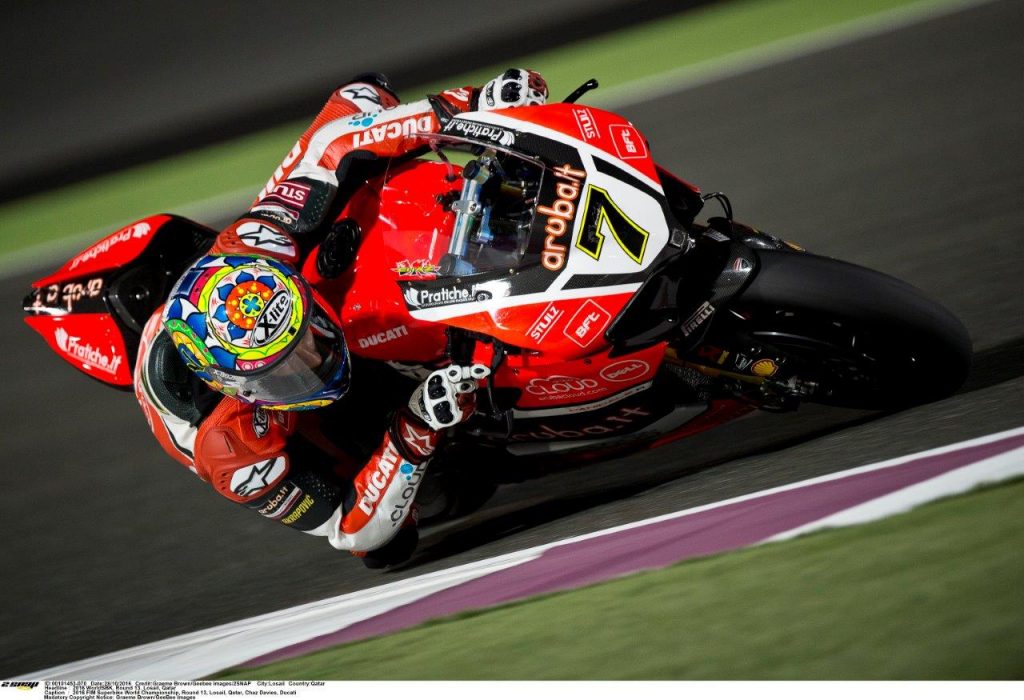 Davies shattered the competition from beginning to end, even after the race was restarted.

Rea and Davies dragged each other off the start into the illuminated first corner, fighting for the lead. Davies got ahead but Rea was quick to retake control at the front. Savadori and Lowes ran wide into the first corner together, while Hayden had to start the race from the pit lane after an early evening engine change exceeded his season’s allocation.

Entering the first corner of the second lap, Rea ran into trouble running off track as Davies got ahead, setting the fastest laps. The Kawasaki rider rejoined in 13th and immediately began attacking to recover positions. With the Welshman away in front, Sykes made a dash to catch Guintoli who was promoted to second after Rea ran off.

Haslam had a good pace, reaching a respectable fifth place from 16th on the grid, before Saeed Al Sulaiti’s Pedercini Kawasaki caught fire, just as the Qatari had reached 15th. The race was red-flagged while the track marshals cleaned up oil spilled from his bike.

After 15 minutes, the race restarted for a 10-lap dash to decide the final victor of 2016. Davies and Sykes shot to the front maintaining their first and second positions, while Rea recovered his poor restart, to set a new lap record on his hunt towards the front.

Before long it was a KRT battle for second as the teammates pushed each other and overtook each other at every opportunity. On the final lap, Rea put on an incredible show of team spirit and slowed right down to let Sykes – who had fallen three seconds behind – to catch up and take second, to secure the runner-up spot in the championship.

Further behind, Guintoli brought his Yamaha home in fourth ahead of fifth-placed Haslam. Torres finished in sixth with the Kentucky Kid picking up seventh. Fores came home in eighth, while De Rosa picked up a solid collection of points in ninth, with Lowes rounding out the top 10.

With the 2016 championship wrapped up, the WorldSBK teams hit a flood of winter testing before a well-earned break.  Their 2017 debut will be at Australia’s Phillip Island Grand Prix circuit, with the opening Yamaha Finance round from February 24-26.   For furtherwww.worldsbk.com.au 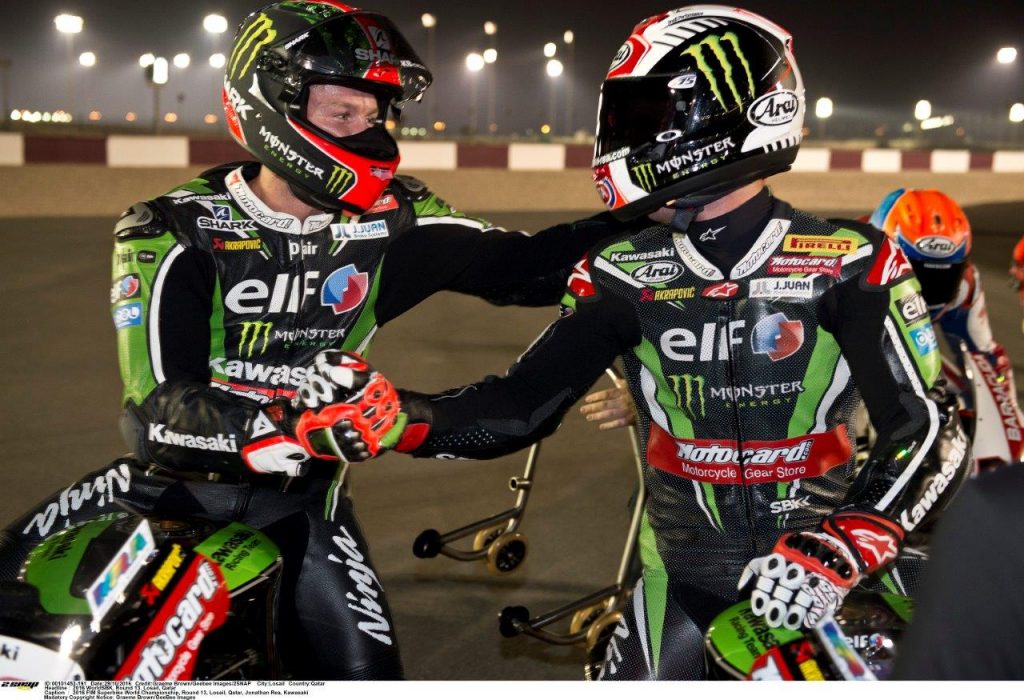 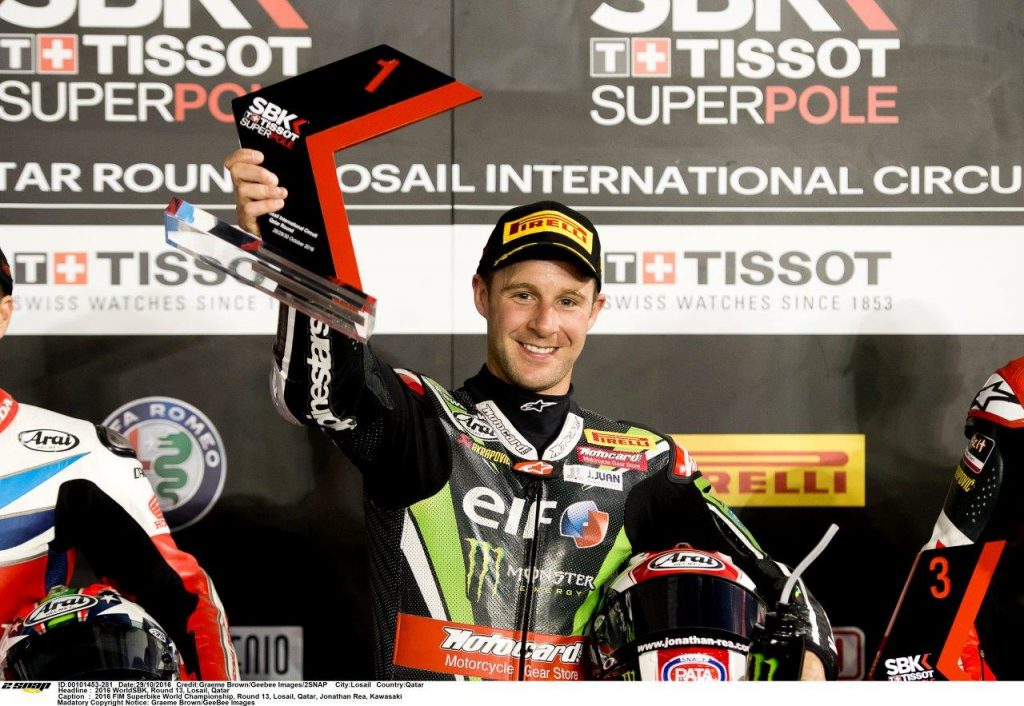