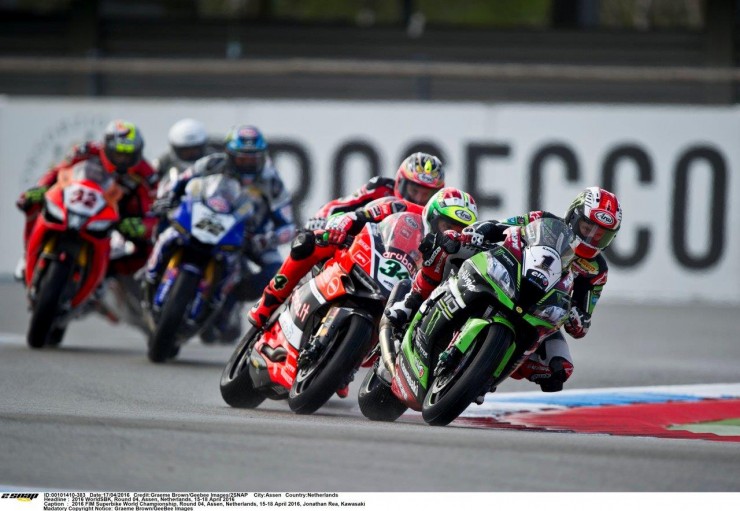 Kawasaki rider Jonathan Rea has won race one at the TT Circuit Assen as he cements his place as second most successful rider at the Dutch track. Chaz Davies took a well-fought second place, and Honda rider and MotoGP Legend Nicky Hayden got to the WorldSBK podium for the first time in third. 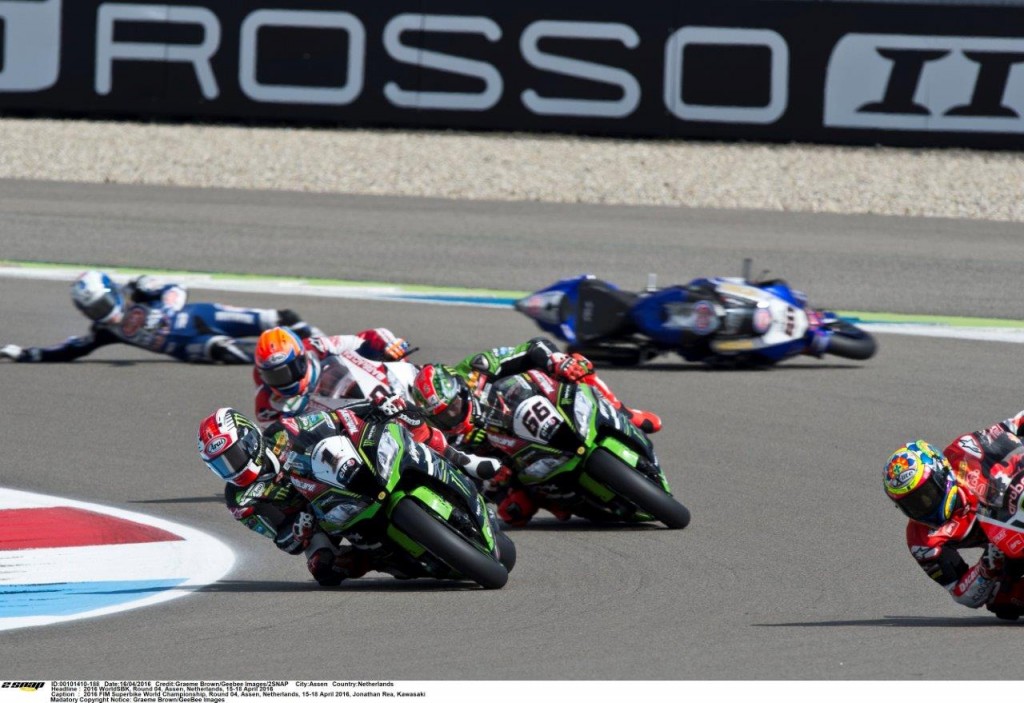 After a great start for the front row, Tom Sykes lead from pole and was followed off the line by KRT teammate Jonathan Rea as both Kawasakis led the race. After a mistake by Sykes, Rea then passed the pole-sitter as the Ducati of Chaz Davies fought to catch the two, eventually getting past both as the lead group started to concertina.

Sykes was the first of the frontrunners to falter as the Kawasaki rider lost the front into turn 16, crashing out of the race but escaping unharmed. The group of Rea, Davies, van der Mark and Hayden dominated, with the Welshman heading the group.

Van der Mark, Davies and Rea fought for the lead in a spectacular racing, before the Dutchman sadly pushed too hard and lost his Honda, sliding out and leaving his rivals to a duel won by Rea. Honda teammate Nicky Hayden, after playing a patient game in fourth, earnt his way to his first podium in World Superbike with a ride that shows he now has the measure of the Honda, and the Pirelli tyre. 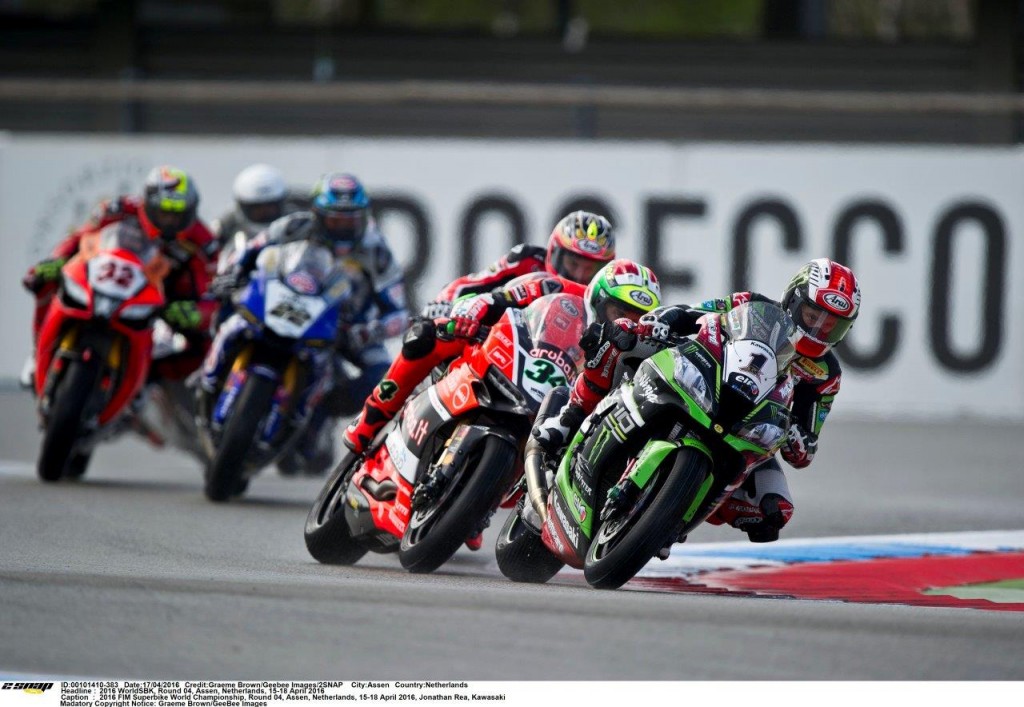 MV Agusta recovered from disappointment in Aragón as Leon Camier fought his way back from being denied entry to Superpole 2 by finishing in the top five in an incredible fourth; a great haul of points and show of pace from the Italian factory and a well deserved reward for the hard work put in by team and rider.

Pata Yamaha pairing Sylvain Guintoli and Alex Lowes suffered mixed fortunes in Superpole and in race one, with the number 50 Yamaha of Guintoli starting from the front row and unfortunately ending his first race in the Netherlands too early with a trip to the gravel. Teammate Lowes fought back from a crash in Superpole 2 to run in the top six before ending his race in eighth.

BMW riders Markus Reiterberger and Jordi Torres, after graduating from Superpole 1, both ran close together in the top ten until Reiterberger ran off track, leaving teammate Torres to take another top five  finish as the flag fell, with the German recovering to an impressive seventh, just behind lead Aprilia Lorenzo Savadori. Savadori recorded his best career result to date by coming home sixth as the Noale factory continue to improve and the reigning STK1000 Cup winner continues to impress, and the Kawasakis of Roman Ramos and Lucas Mahias, replacing Sylvain Barrier, closed out a top ten in which every manufacturer was represented. 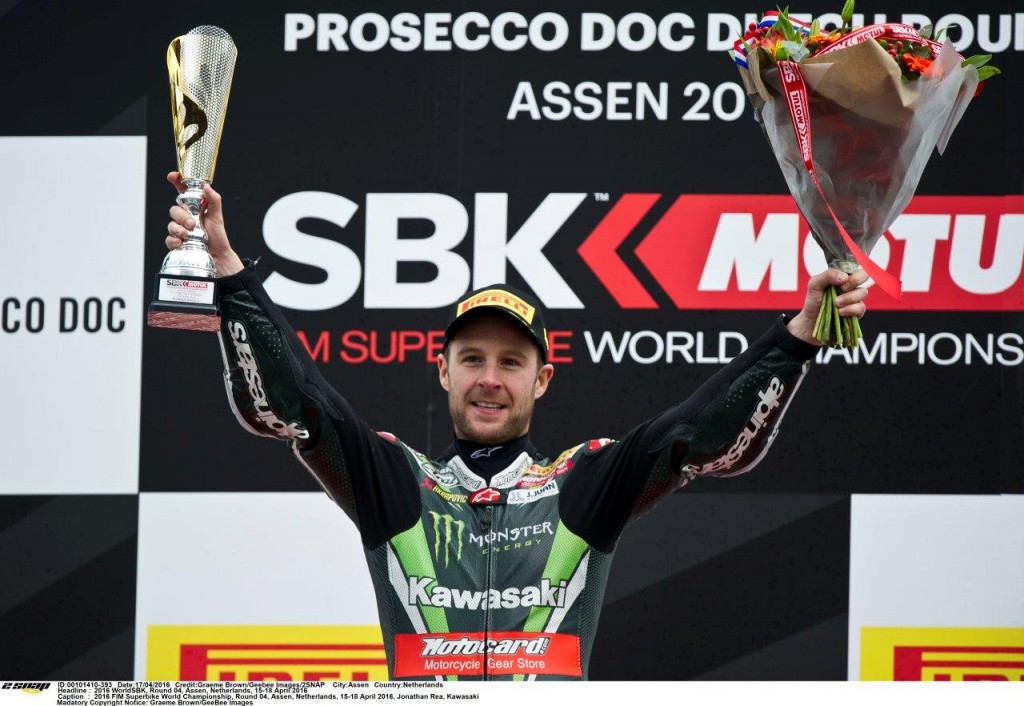 Race two: Rea completes the pair as van der Mark gets the crowd back on their feet in a tense game of chess at Assen

KRT rider Jonathan Rea took another incredible win in the Netherlands in race two as a half wet half dry race saw tyre decisions play the key role. Joined on the podium by teammate Tom Sykes and local hero Michael van der Mark, the second battle was characterized by nervous glances at the sky as the riders dealt their cards. 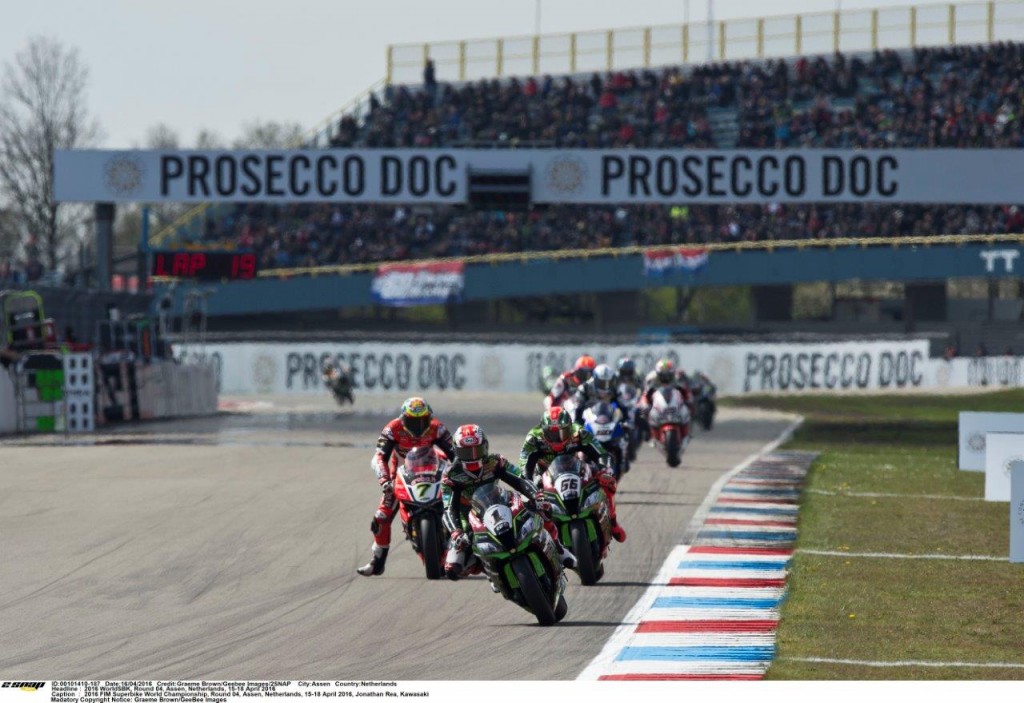 Sunday morning initially brought better weather to the TT Circuit Assen, with the sun breaking through the clouds to give the Dutch track a crisp, clear morning. With a lower breeze after the wind caused issues on Saturday, the race looked set to be in dry conditions, before a deluge interrupted World Supersport and saw a Wet Race declared for WorldSBK. 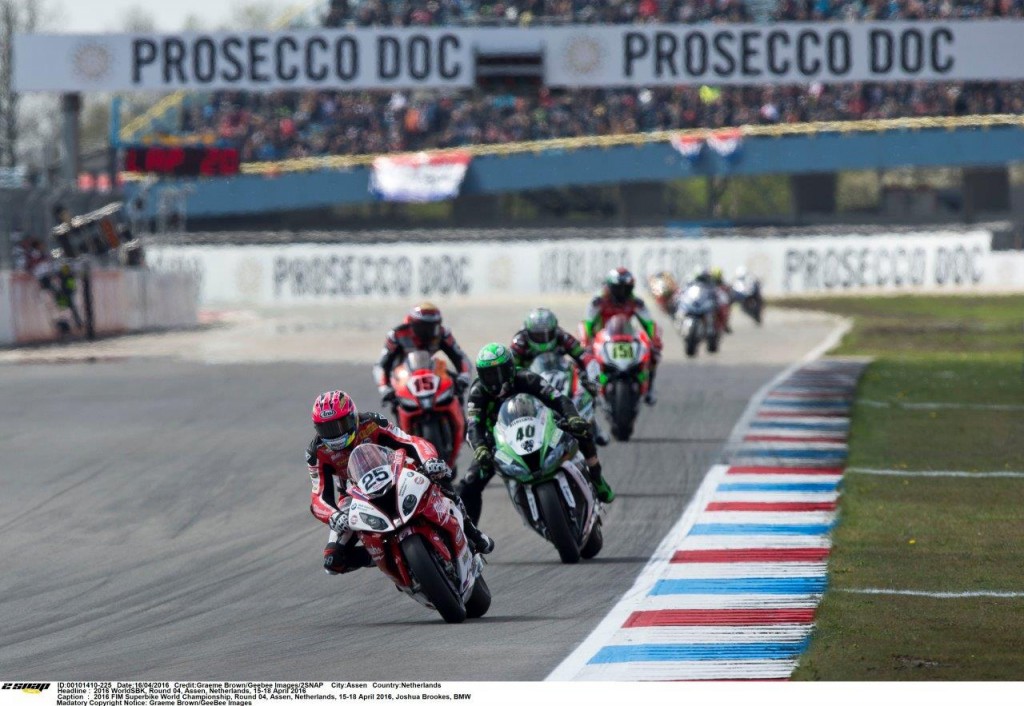 With Guintoli plummeting off the line, the two Kawasakis of Sykes and Rea took to the lead, with Chaz Davies’ Ducati and Michael van der Mark and Nicky Hayden’s Hondas in hot pursuit. As the conditions caused quick position changes, it was Milwaukee BMW rider Josh Brookes who emerged in the lead, with the damp conditions suiting the reigning BSB Champion. 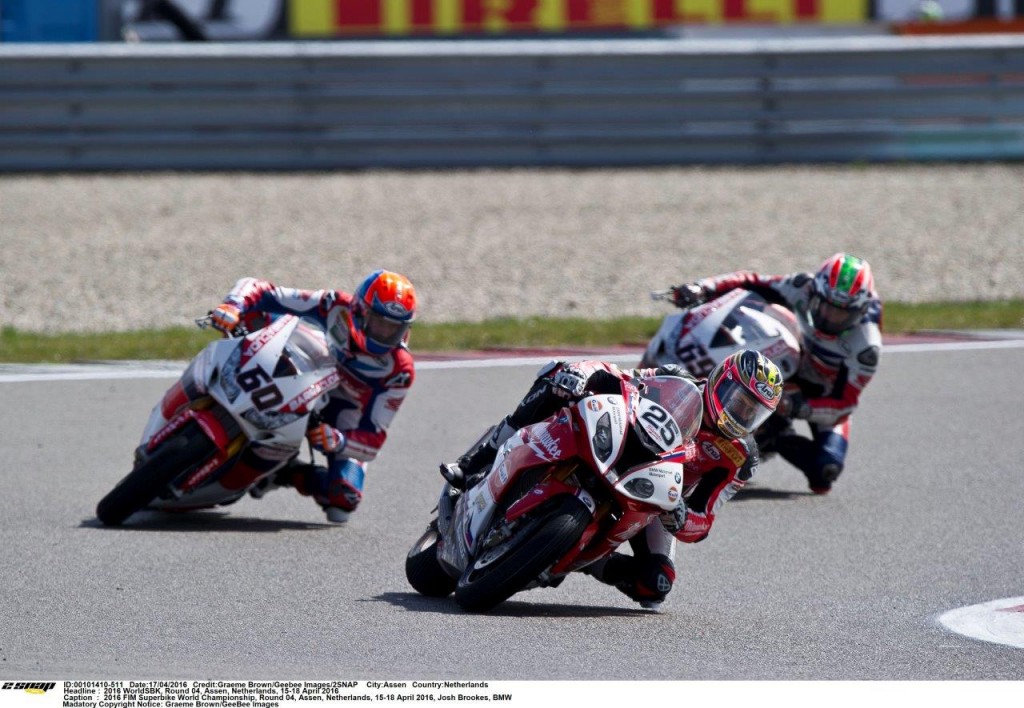 Saturday podium finisher Nicky Hayden, reigning champion Jonathan Rea and local hero Michael van der Mark were the challengers, before Rea and Sykes were the first of the frontrunners to dive into the pits for dry tyres as track conditions improved, followed by Van der Mark on the next lap.

As the pack started to shuffle after the tyre changes, Pedercini rider Lucas Mahias found himself at the head of the race, with KRT pairing Rea and Sykes hunting him down, followed by van der Mark. As dry tyres became necessary, reigning champion Rea took control of the race once again to take another win in WorldSBK and increase his championship lead. Teammate Tom Sykes made a well-timed tyre change to come home in P2 and recover some earlier lost ground, and Dutch rider Michael van der Mark remembered Saturday’s standing ovation after a crash and kept the Honda on the track to take another home podium, keeping his WorldSBK rostrum record at 75% at his home circuit.

2015 STK1000 winner Lorenzo Savadori was another superstar decision maker as the IodaRacing rider took his Aprilia to P4 and his best ever result, followed home by Ducati’s Chaz Davies, who was the lead bike for the Borgo Panigale factory once again. Honda rider Nicky Hayden, who had been challenging for the lead in the dry, came home sixth after waiting a little too long to change to slicks, mindful of the grey skies ahead.

Alex Lowes made up ground once again to end the race in seventh on his Pata Yamaha, in front of Davide Giugliano on the second Aruba.it Ducati. Leon Camier, after giving MV Agusta their best result of fourth in race one, again brought home a good haul of points in ninth.

Xavi Forés crossed the line to complete the top ten after an impressive showing at the start of the race, in front of front row starter Guintoli on the second Pata Yamaha YZF R1, with the points scorers completed by Roman Ramos, Lucas Mahias and the BMWs of Karel Abraham and Jordi Torres. Josh Brookes, after leading and impressing in the difficult conditions, sadly crashed out and was unable to complete the race on his Milwaukee BMW, but will be encouraged by his incredible early pace.

WorldSBK is back on track at the mythical Autodromo Internazionale Enzo e Dino Ferrari in Imola at the end of April, for the cards to be dealt and played once again.

After the races Rea said, “I just took my time at the beginning and just tried to stay in the group. I didn’t want to go too far in the front as I wanted to judge when the others were going into the pit.

“Then I took the decision to go in early and it was the perfect choice. We were so calm on the grid, so calm when the rain came and even the team asked me when we were making the pit stop, if I preferred the intermediate or the dry.

“So I said let’s go with the slicks and they put the slicks on. I just took my time then at the beginning, probably a bit too much, and then in the end I had a lot of time to play with. I was so, so happy to win a double here for my team. This gives us good momentum now for the next few races.” 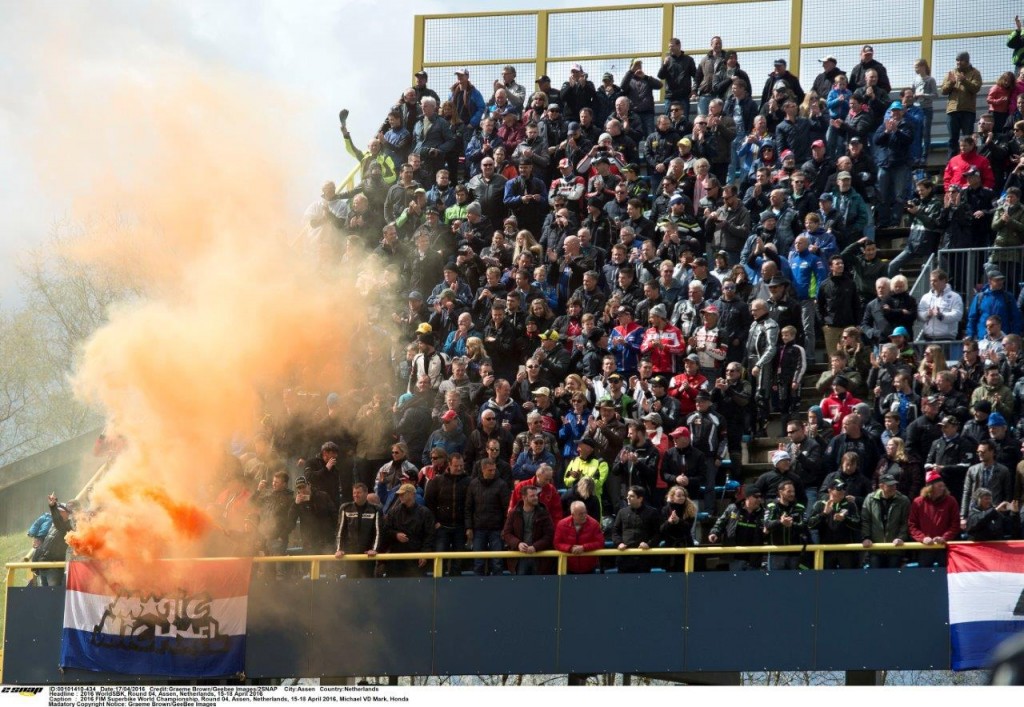 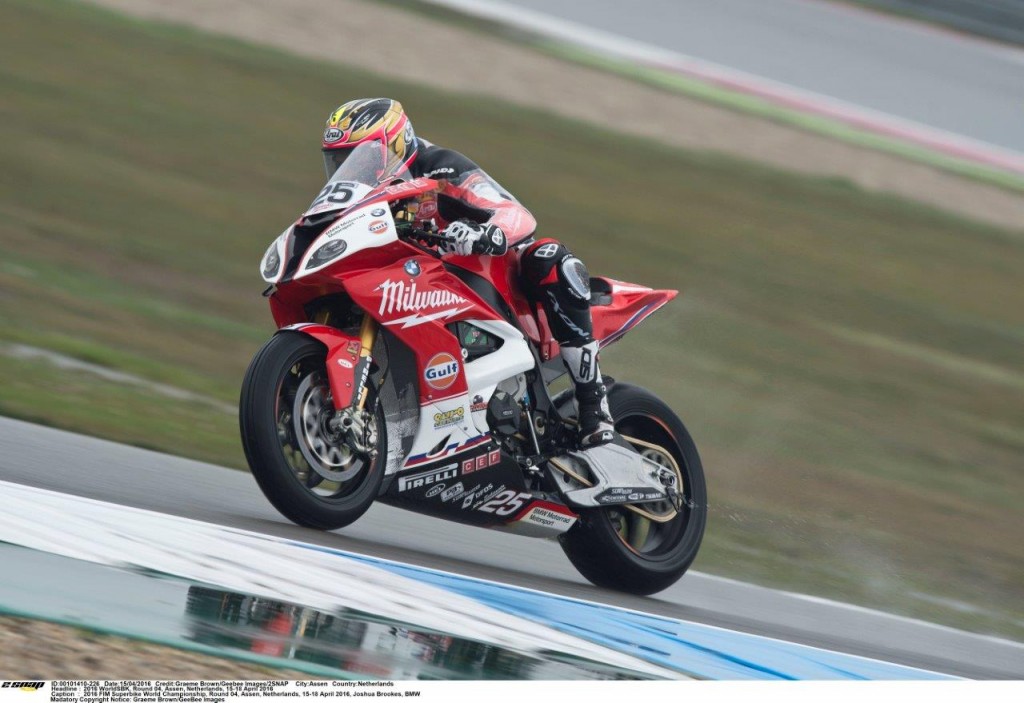 A deluge late on Sunday morning at the TT Circuit Assen saw a wet race declared for the WorldSBK contest and in a frenetic early part of Race 2 it was BMW rider Josh Brookes who forged ahead, with the conditions suiting the current BSB Champion.

However, shortly after having made a pit stop to change to slicks, Brookes crashed out at turn 9 after riding so well on wet tyres.

Nonetheless, the Australian was encouraged by his excellent performance in the first part of the race and took the positives from the visit to The Netherlands.

“We’ve been making progress all weekend,” Brookes commented, “When the rain first came down I was a little bit put off because we’d been in P5 in morning Warm Up in dry conditions, so when the rain started I was thinking this could be not so easy. As it was the changes we made to the bike during the weekend in the dry also made it better in the wet conditions, so I felt like I could go faster and I was thinking I need to move forward. I started making passes and it felt very easy. I was confident with the bike and the tyres and it felt natural to ride at that speed. To lead the World Superbike race was a great feeling and I was really pleased.”

Brookes added, “It was particularly satisfying because the first part of this year has been so tough for the team and for me. Changing to the World Superbike championship, changing to BMW motorcycles and then incorporating the BMW staff and electronics and all the things that come with WSBK it has actually been quite a big challenge.”

With the clouds battling the sun for supremacy and the harsh wind of Saturday replaced by a cooler breeze, Sunday seemed to promise better weather would hopefully hold out for the WorldSSP grid as they lined up for another battle.

It was Sofuoglu who got the best start, with PJ Jacobsen slotting into P2 off the second row, leaving poleman Krummenacher in P4 chasing the Triumph of Luke Stapleford. Cluzel began his fight back and was inside the top ten before a sudden deluge hit the track and the red flag came out.

With conditions suddenly treacherous, Jacobsen lost the front before slowing for the red flag and was given the task of pushing his damaged Honda back to the pits to see if it would make the restart. With a quick restart procedure and riders lining up on the grid for the restart in the order in which they saw the red flag, Jacobsen did manage to begin from P1 on the repaired Honda.

With a run off for Cluzel and Jacobsen encountering some smaller issues, it was Puccetti pairing of Krummenacher and Sofuoglu carefully heading the race as GRT rider Gino Rea fought to keep up with the pair on his MV Agusta, with Jacobsen, led by Smith, trying to get back in the podium fight.

Krummenacher suffered a run off at the final chicane that saw him out of podium contention, before Jacobsen lost the Honda in the treacherous conditions. The last lap battle to decide the podium conditions saw Brits Rea and Smith fight off reigning Champion Sofuoglu, with Kyle Smith crossing the line 0.8 seconds clear of Gino Rea to take the victory. Sofuoglu, locking out the podium in P3, gains another small margin of points on teammate Krummenacher, who came home fourth. Assen lap record holder Cluzel will be wanting to forget about the weekend after crossing the line in P18, not adding to his Championship tally.