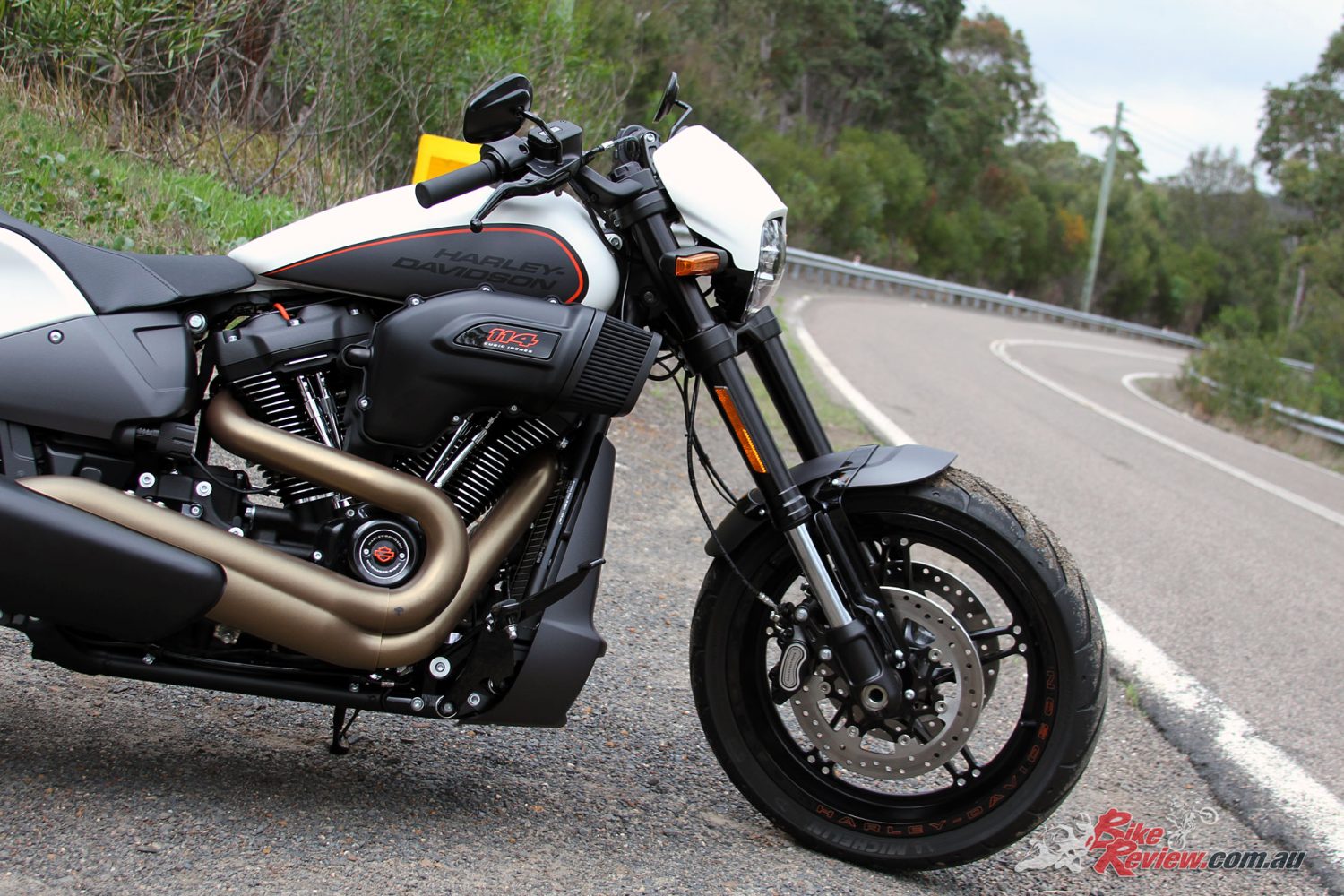 A spin on Harley-Davidson's 2019 FXDR, a motorcycle which seems to fill the gap left by the V-Rod...

There are some bikes which really go their own way, and there’s no better representation of that, than Harley’s 2019 FXDR (114), a motorcycle which is sold short by being classified as simply a cruiser… a power cruiser perhaps, or hyper-cruiser may be more appropriate.

I’m no cruiser guru either, which is why we had Mick Withers do the full test on this machine (it’s on its way!), however I can’t deny that I had plenty of appreciation for the FXDR, starting with that killer styling. 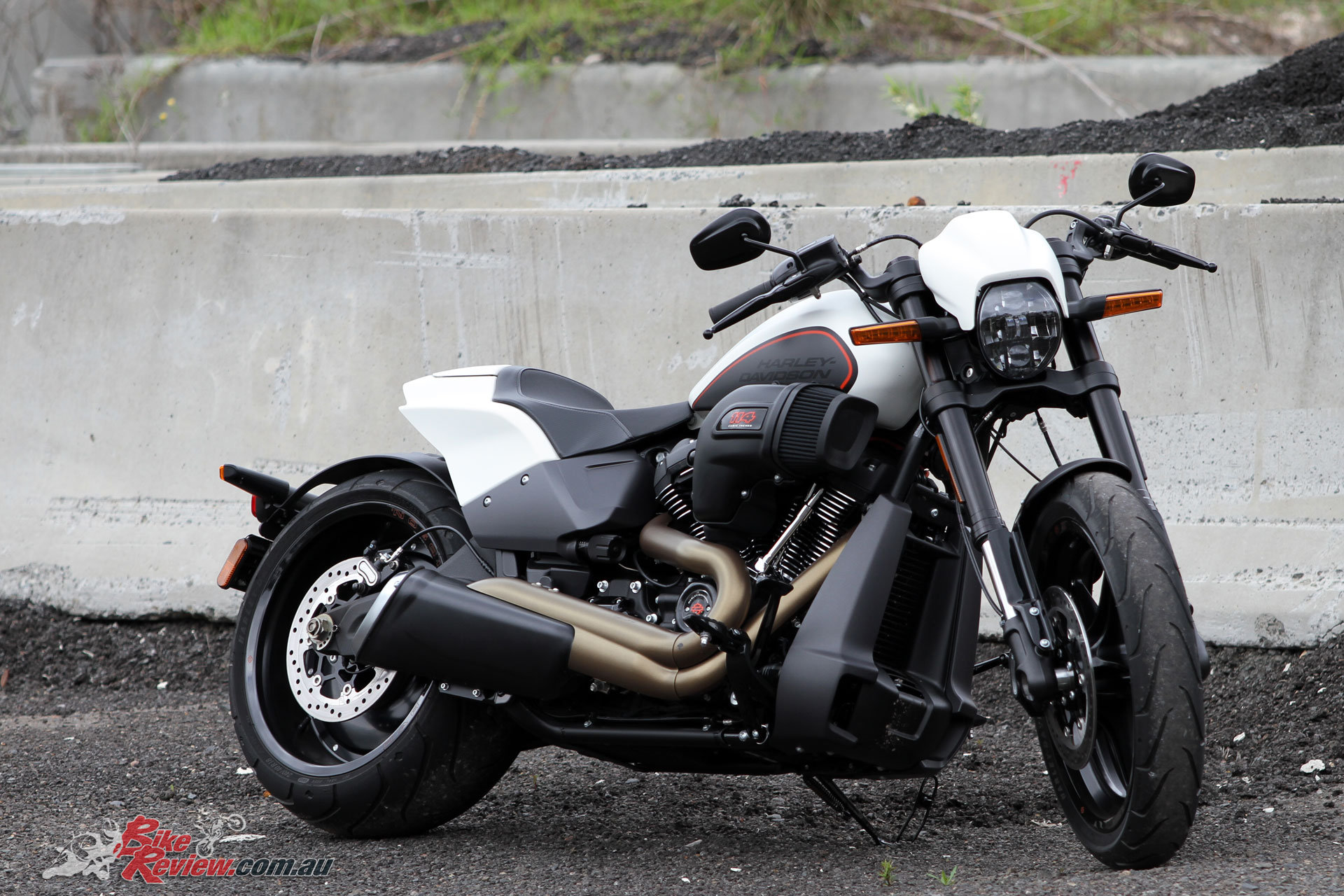 Long and low the FXDR is dominated by the Milwaukee-Eight 114 powerplant with a massive dominating air-intake strapped to the side and large but well incorporated two-into-one exhaust system, which is particularly noticeable due to the bronzed heat shielding for the rider.

43mm forks on the front are sporty and raked out, while a 240-section rear tyre suggests the FXDR means business, but may be somewhat compromised by that tyre choice… a compromise that you’ll find is relatively small indeed once you’ve ridden this machine. 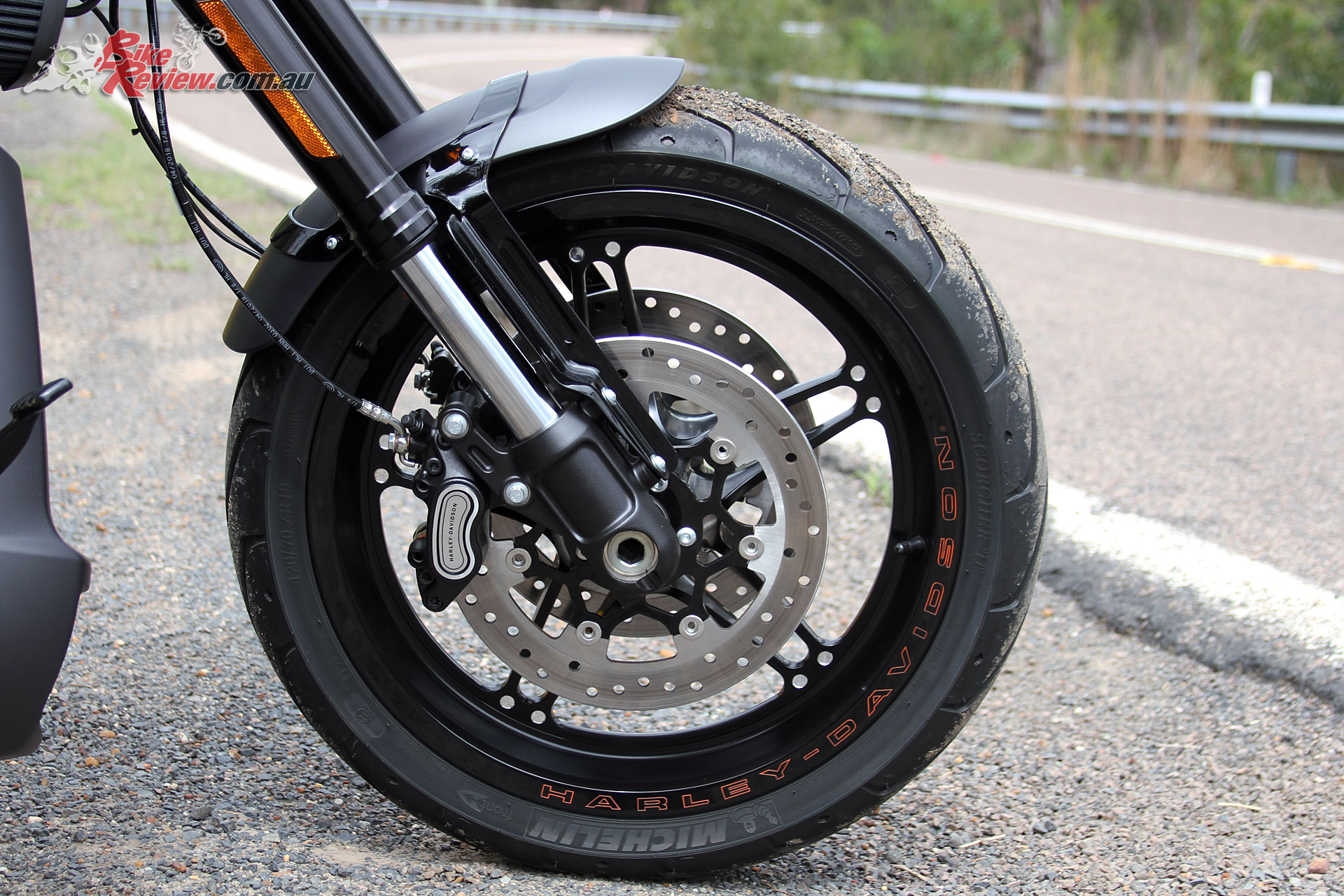 The ‘Denim’ (matte) paint in Industrial Gray on the FXDR also really stands out, and while the lighter colour option will no doubt require more care to keep clean, it’s also a real standout in my opinion, while obviously more traditional and darker colour options are available. 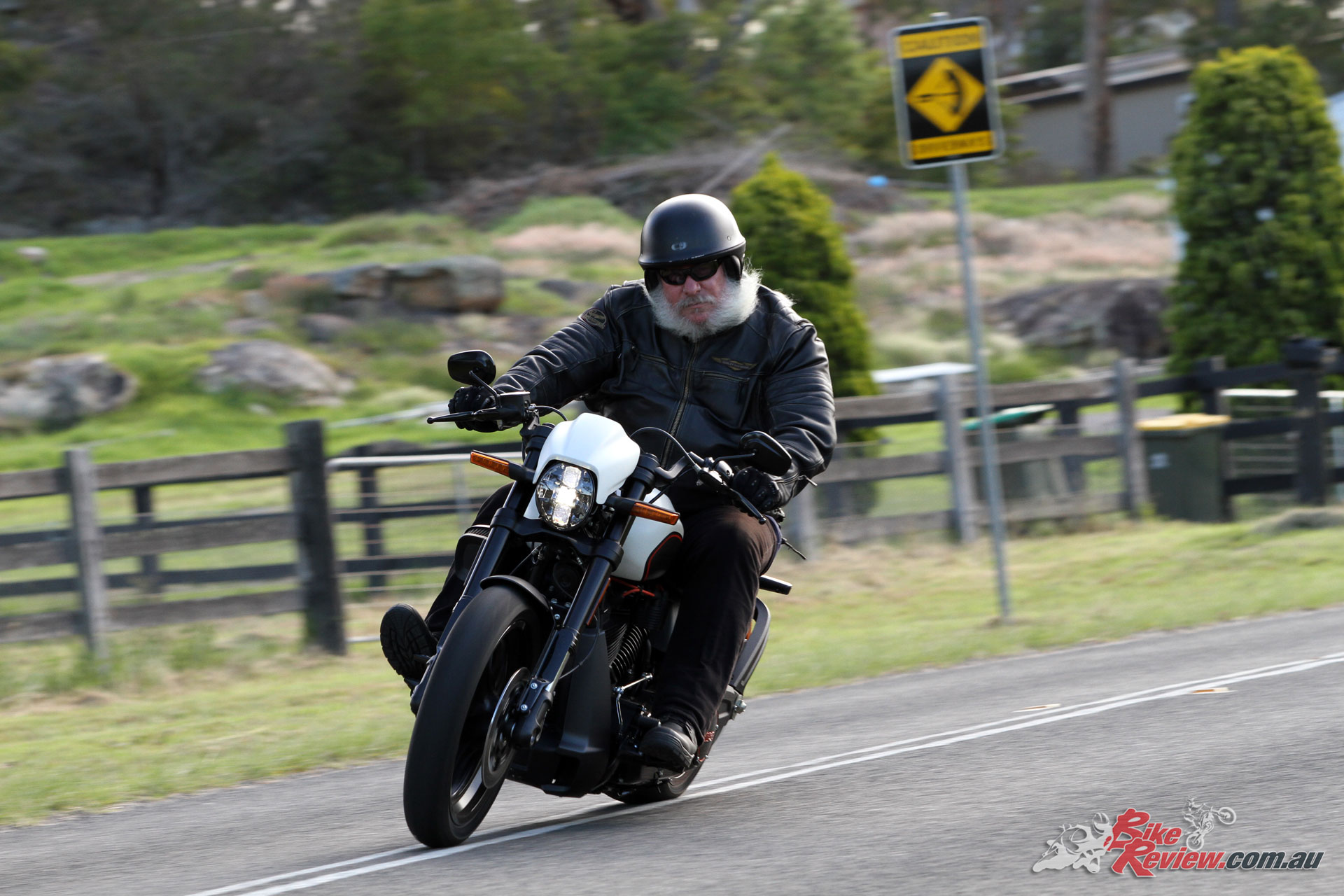 The beefy rear swingarm stands out and has seen a pretty hefty weight saving, while wheels are Ace custom items with machined highlights. The tail is well integrated and features a single seat for the rider, and it seems a travesty to consider going the route of adding the pillion seat and ‘pegs to this machine. However if that’s the stipulation for adding this machine to the garage I’m sure anyone would jump to it. 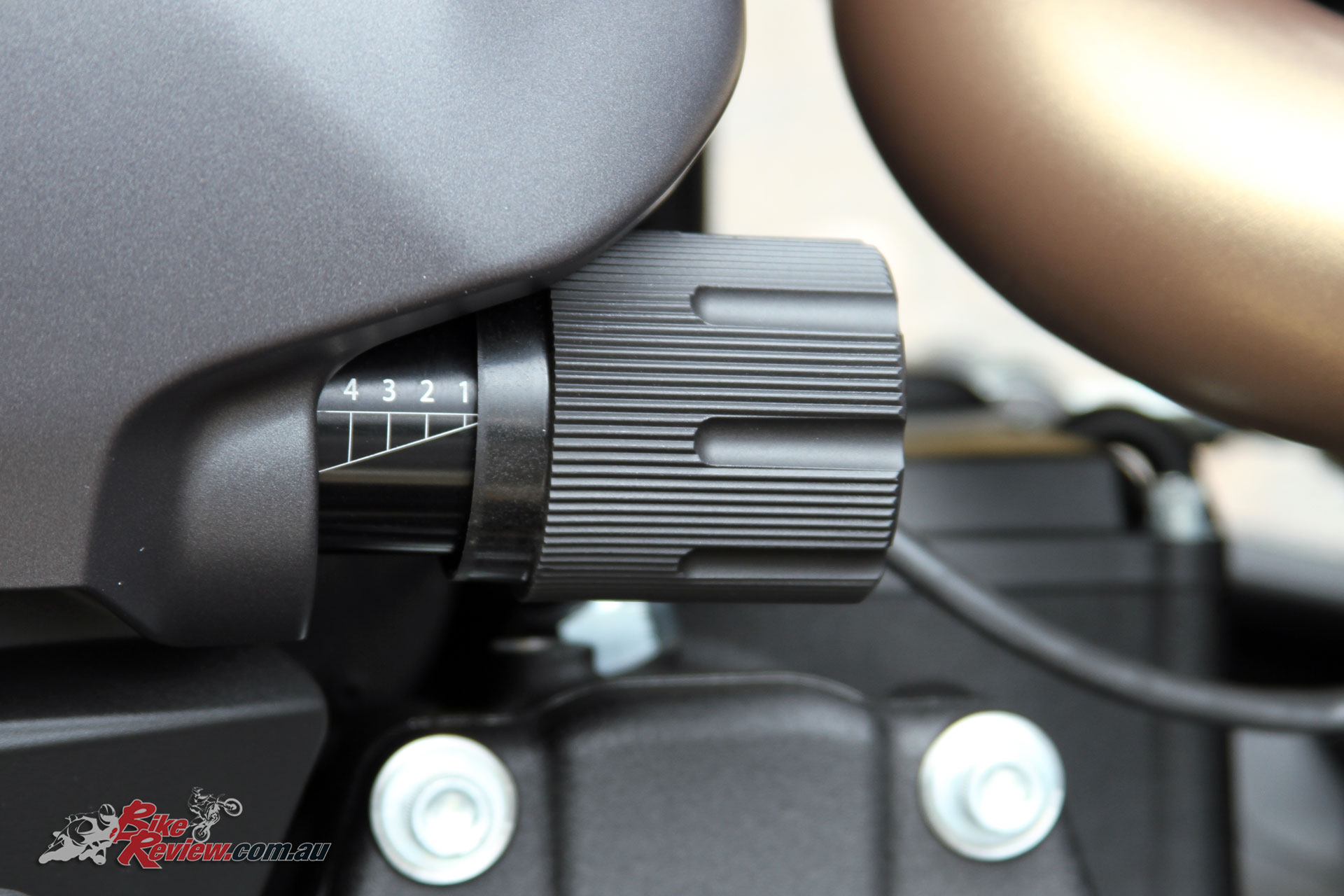 Priced from $35,495 ride-away the 2019 FXDR also carries a fairly hefty price tag, which is really a subjective point, but also aligns this particular bike in the region of the old V-Rod, which it seems likely intended to replace. 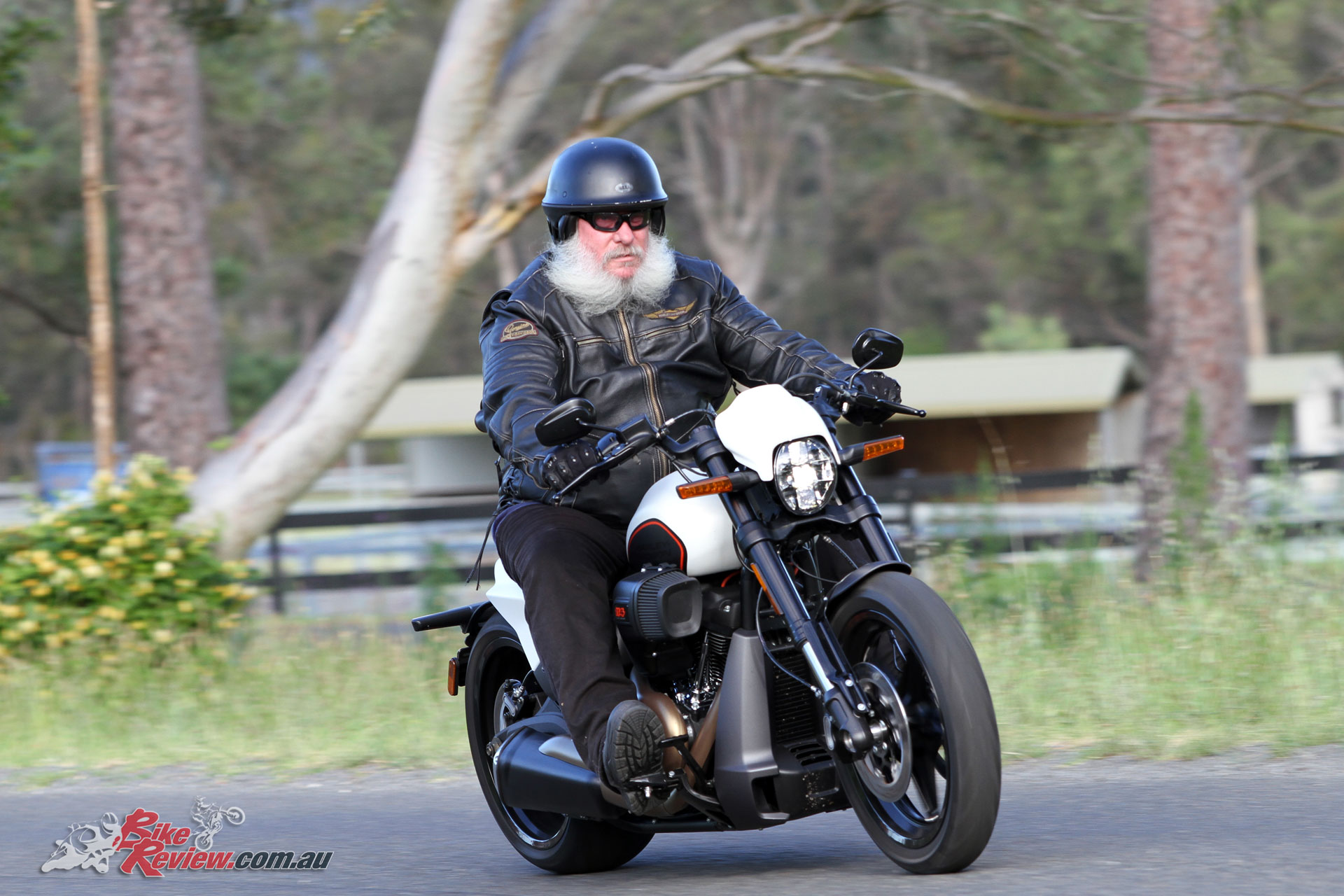 The FXDR is of course far more than just looks and boasts 160Nm of V-twin torque, a figure which is pretty astounding and offers incredible propulsion, on a package which I found relatively comfortable. The seat to forward control ratio was just right for my 180cm frame, while I was just a touch stretched out to the ‘bars. I’m longer in the legs and shorter in the torso though, so for someone with more even proportions this may be perfect. 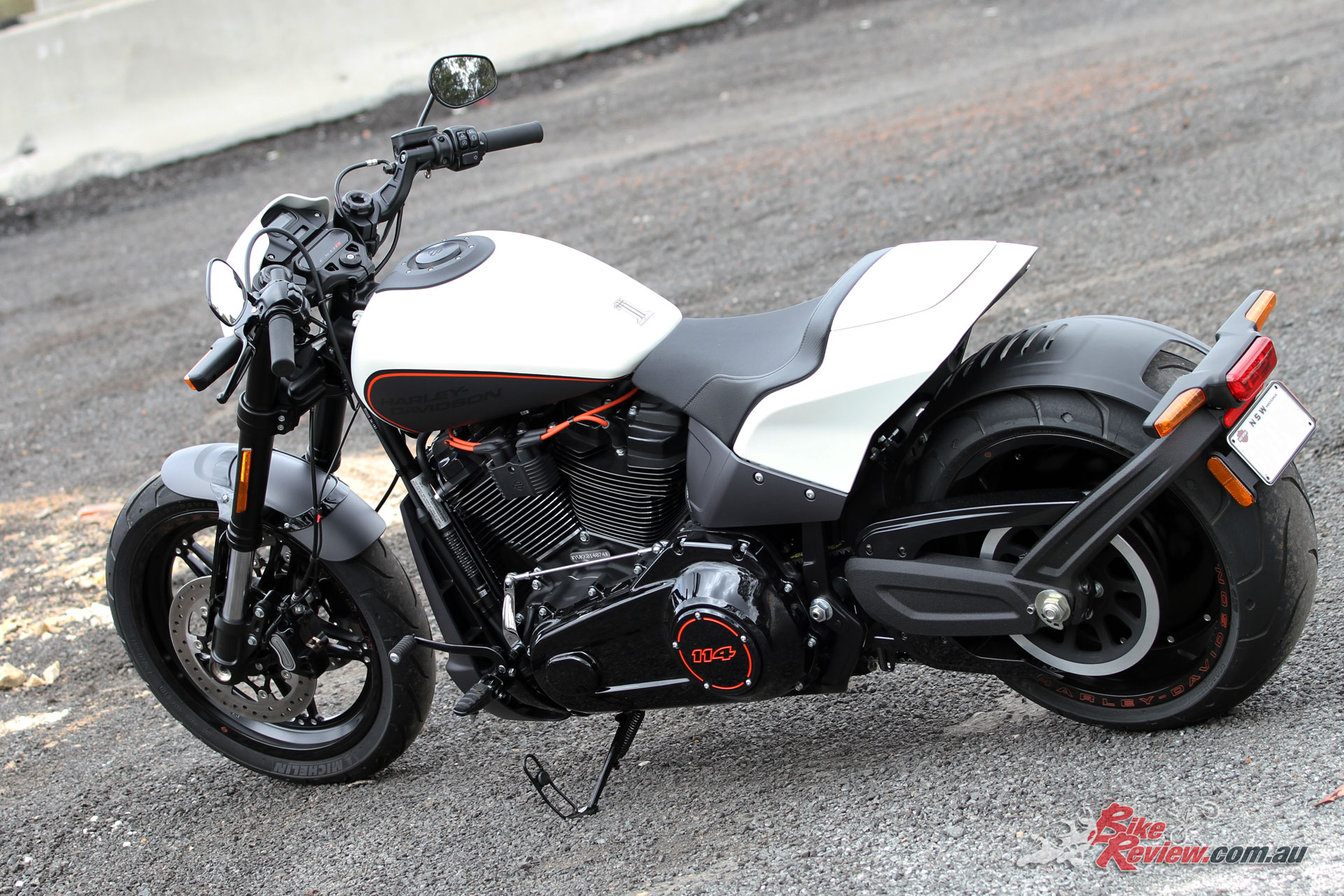 Two hours in the saddle was an easy capability on this machine and I was quite surprised at how well the bike handled the poorer road conditions so frequently found on many motorcycling routes. You’d almost think the Government doesn’t like us motorcycle riders at times!

With rear preload set by Marcus from Harley-Davidson for my weight, the rear was well supported and retained good control over all but the roughest of road inconsistencies for a cruiser, with just the occasional super sharp feedback being transfered through. Knowing these sections of the road, there’s very few machines which perform well over these particular tests so for a relatively heavy cruiser I was impressed. 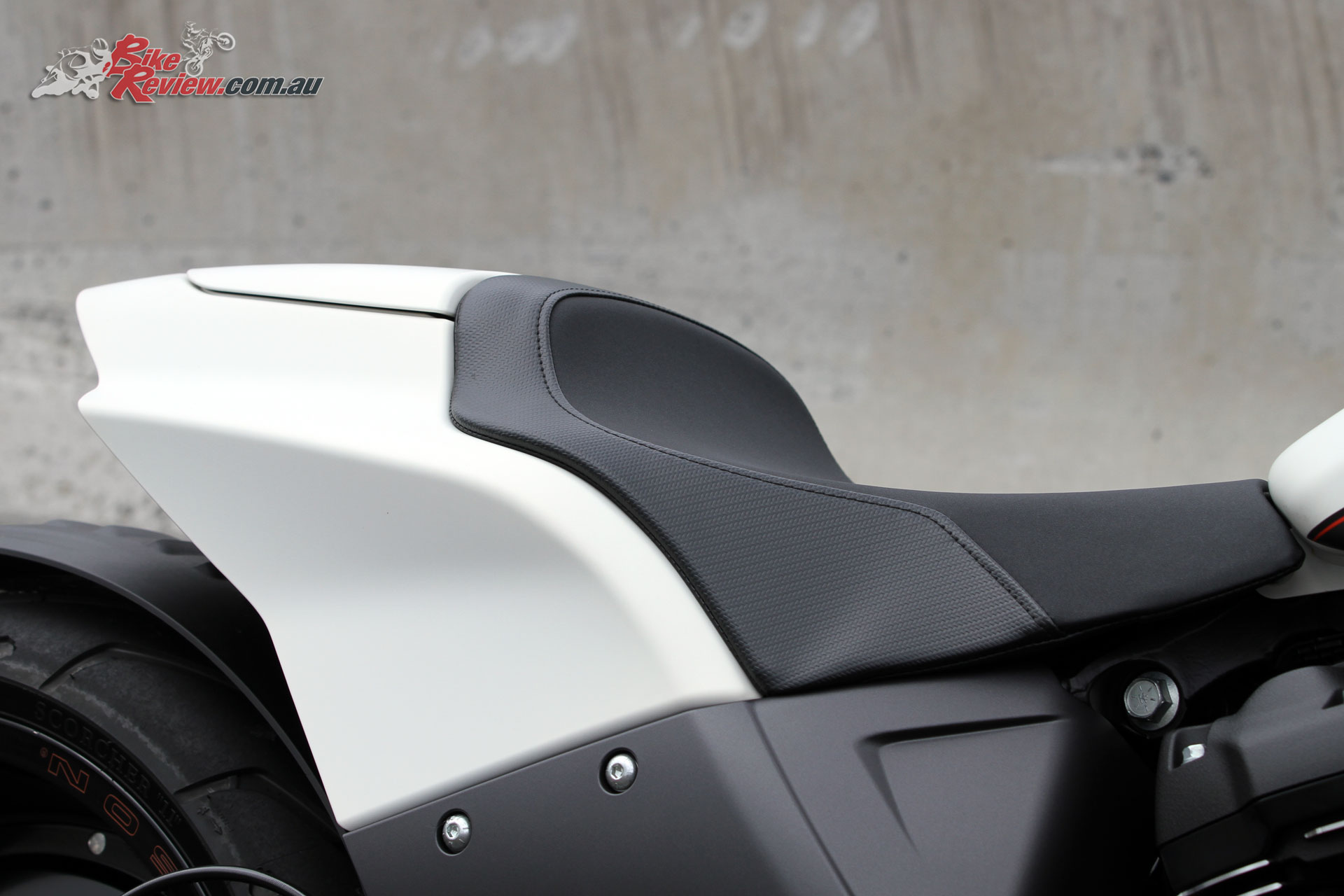 The 43mm forks on the front end likewise offered good feel and confidence and even hard on the brakes provided good support for my 75kg weight not to mention the bike’s 300kg or so. Handling and ground clearance were also surprising strong points considering that 240 rear, and while at times a little muscle was required to get the FXDR out onto the sides of the tyre, this was unarguably the sportiest cruiser I’ve tested. 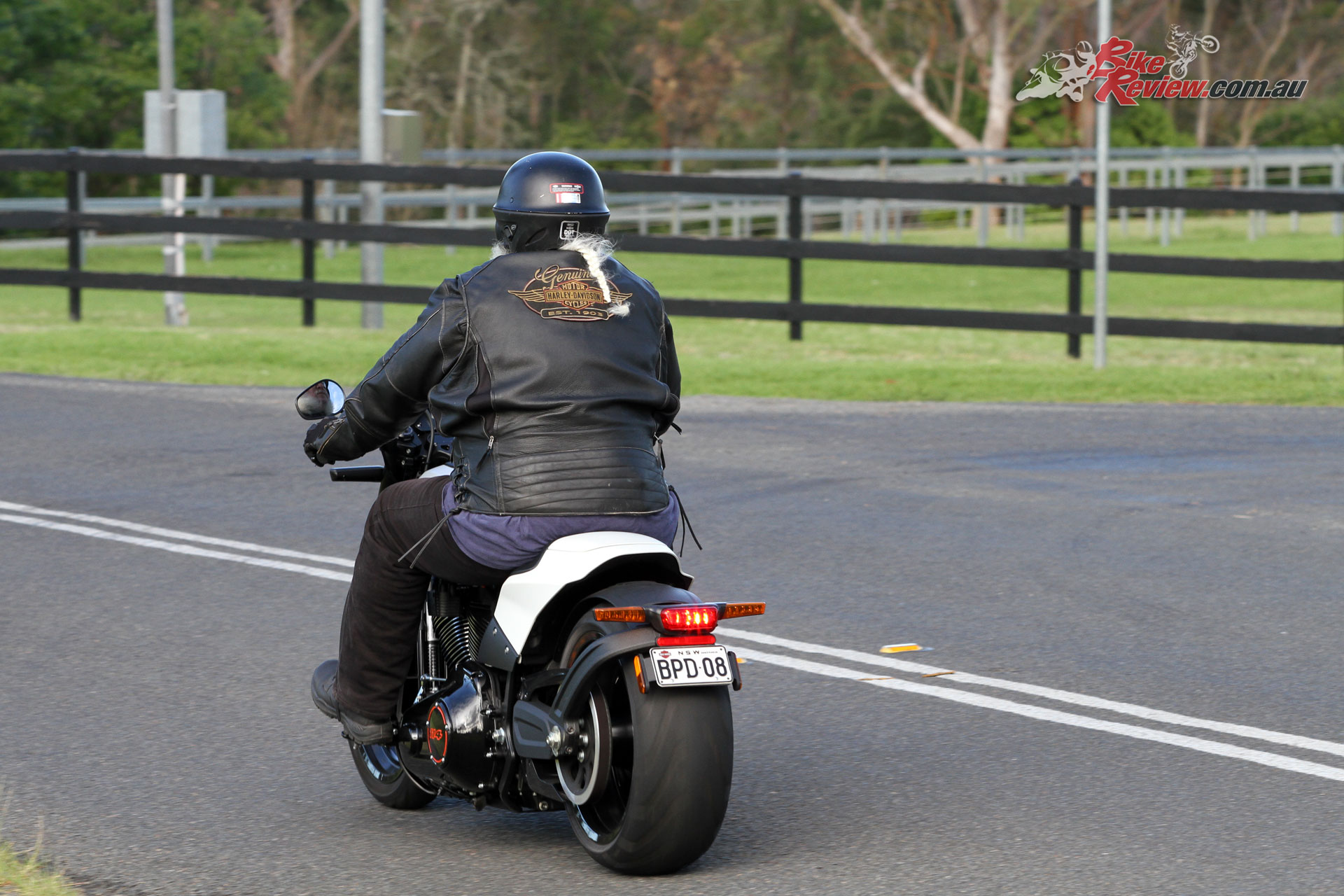 The Harley dual front brake system is also well suited to the FXDR with strong stopping power and good bite, while the rear offers plenty of control and additional stopping power, with grip and pure momentum to be the issue rather than the brakes themselves, while the stock tyres proves great in the mainly dry conditions I tested in. 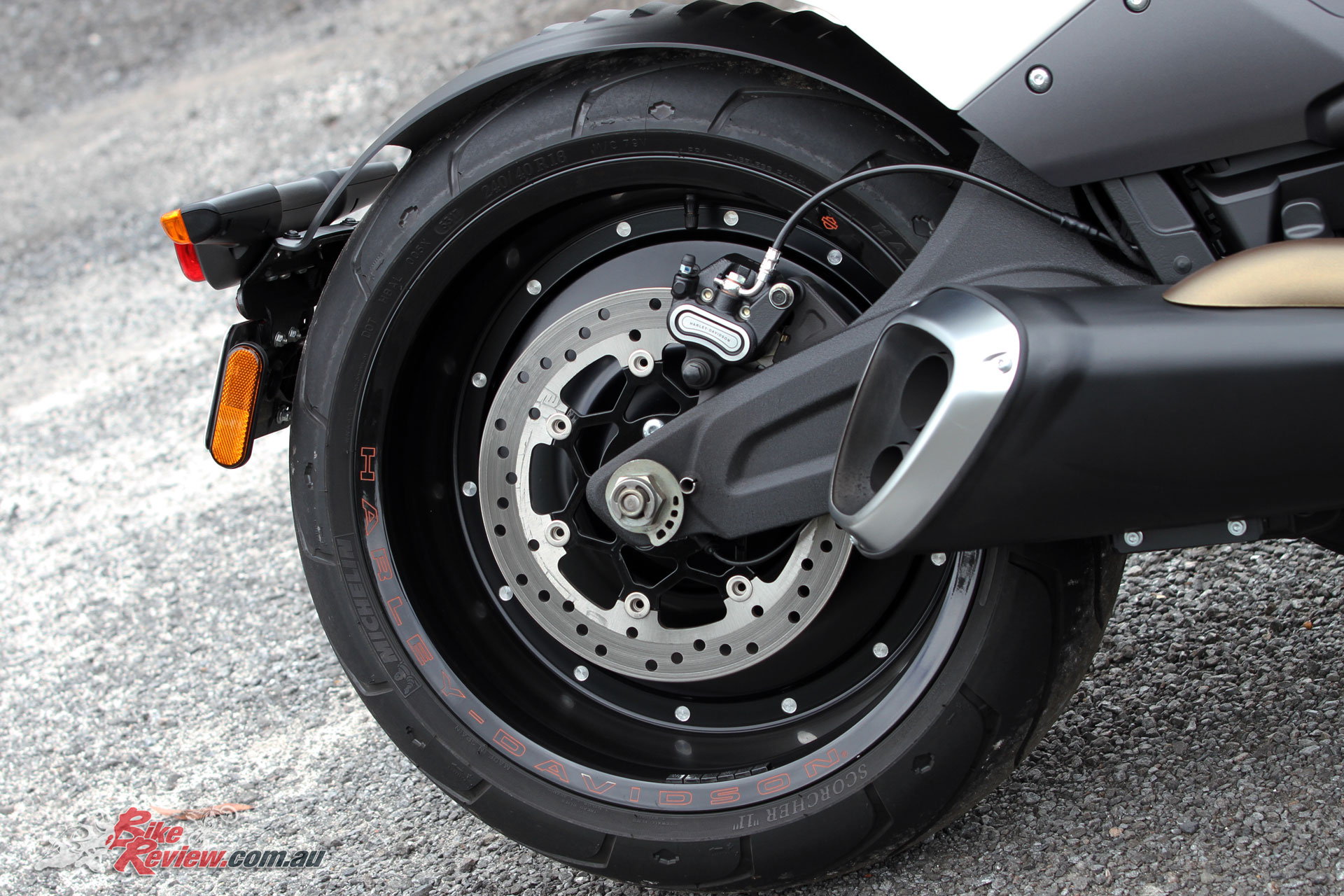 A big consideration is of course the 160Nm of torque on offer, that’s simply incredible and fueling was super smooth and ultra manageable. Even in slick and slippery conditions the FXDR would be a manageable machine if you exercise self control, while opening up that throttle in anger is pure unadulterated fun. That’s all without having to revert to modern day electronics like ride modes or traction control.

Get a bit of open road and slam open that throttle and hold on for dear life as the FXDR takes off like a rocket, because this thing hauls ass, while tackling the twisties is both fun and engaging. There’s good ground clearance and the FXDR is stable leant over, keeping in mind the wheelbase is reasonably long at 1730mm, and while the front tyre is a more typical shape the rear is flatter, for a good balance between the two. 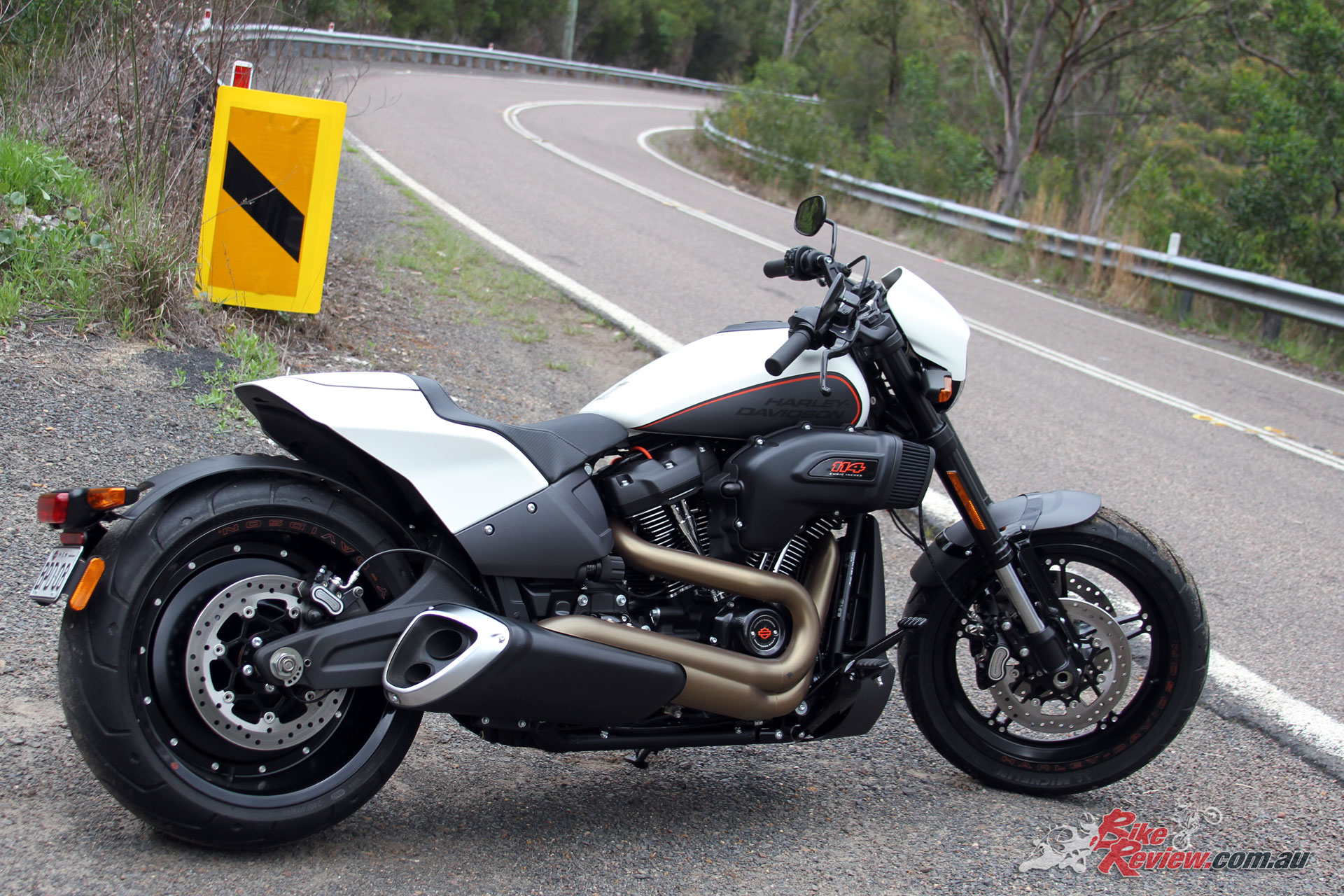 I also did a bit of city and suburban commuting and while it wasn’t the extremes of Sydney’s often crawling peak hour traffic, in less extreme congestion the FXDR was an easy thing to ride out to the better motorcycling roads, as well as a good highway mile muncher, despite the lack of wind protection.

Overall I came away from riding the FXDR with a massive smile on my dial. Sure pricing is prohibitive for your regular punter, these are going to be a special machine, and they are clearly strong competition for Ducati’s Diavel, but in more traditional cruiser form. 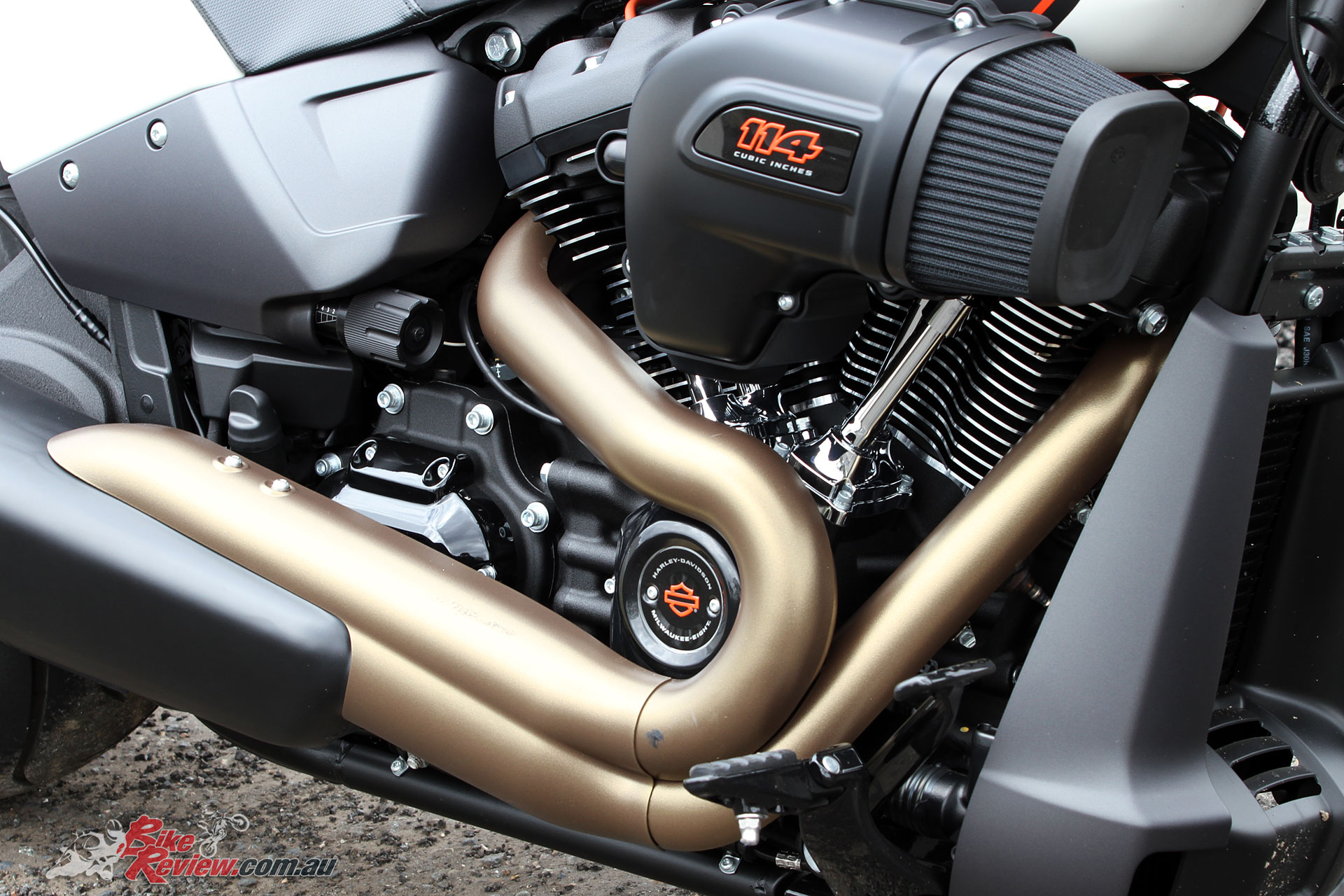 I can only say, if you’re interested in the 2019 Harley-Davidson FXDR, then go test ride one as this is an impressive machine and well worth a look-in. 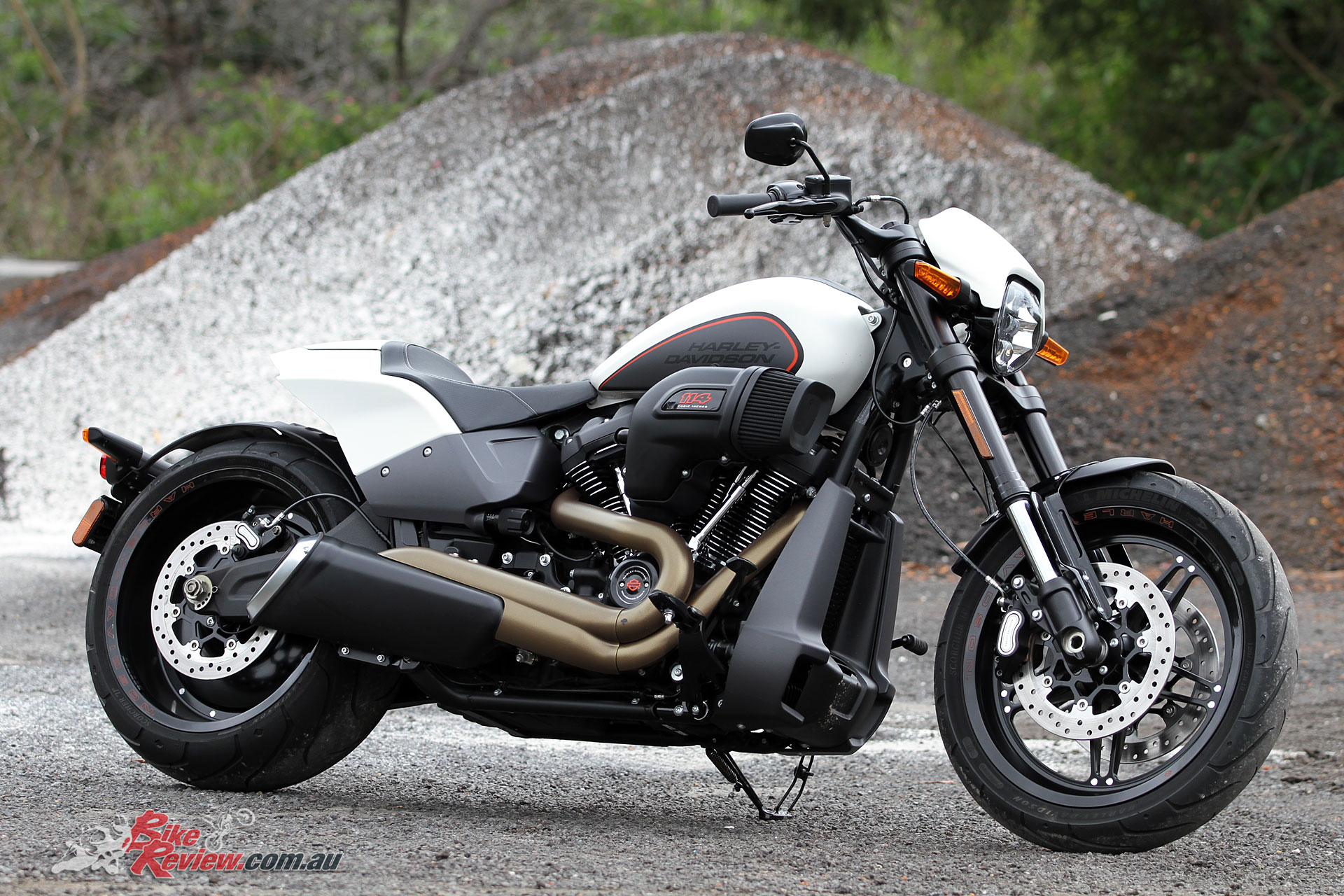 If you’re in the market, seriously go check out the FXDR

You can check out the Quick Test Video Review on the 2019 Harley-Davidson FXDR below, or on our YouTube channel. 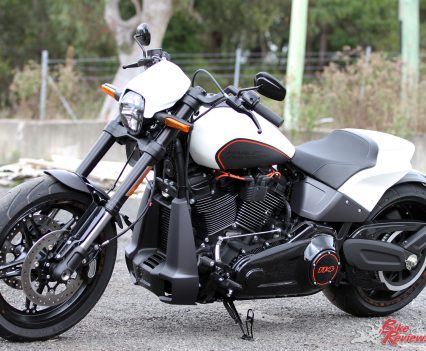 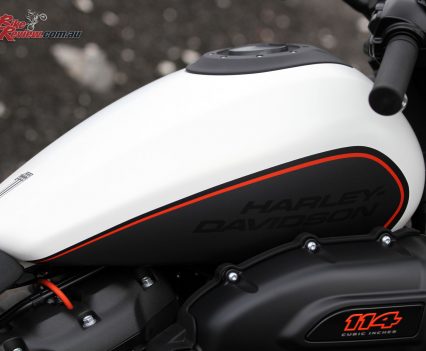 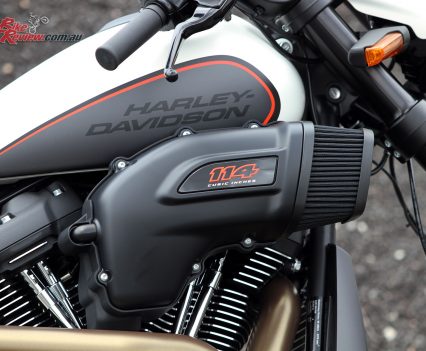 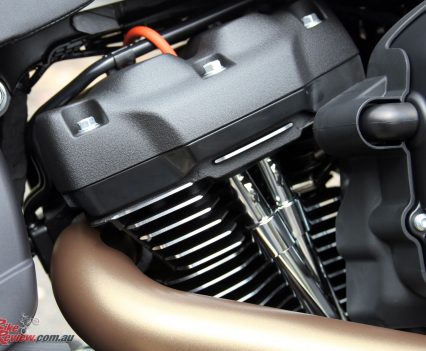 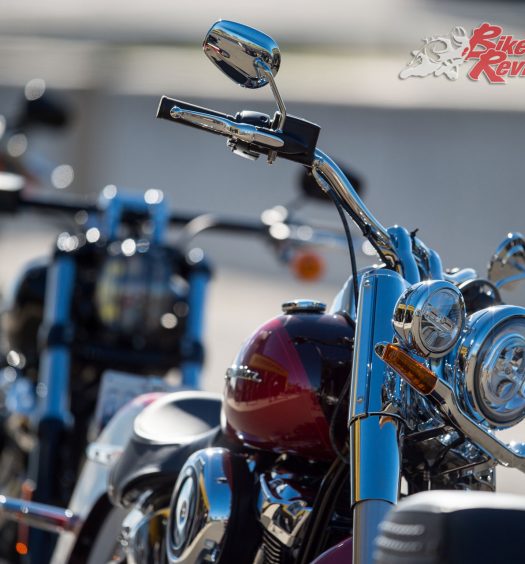