Bridgestone's Battlax S21 tyres are a Hypersport option that offer a more road orientated option than the RS10, and replaced the S20 EVO...

Switching to a set of Bridgestone Battlax S21 tyres was a bit of a move away from the more sport touring orientated tyres I’ve tested on my Long Term Daytona 675R, but in all fairness more suited to the bike’s envisaged use. 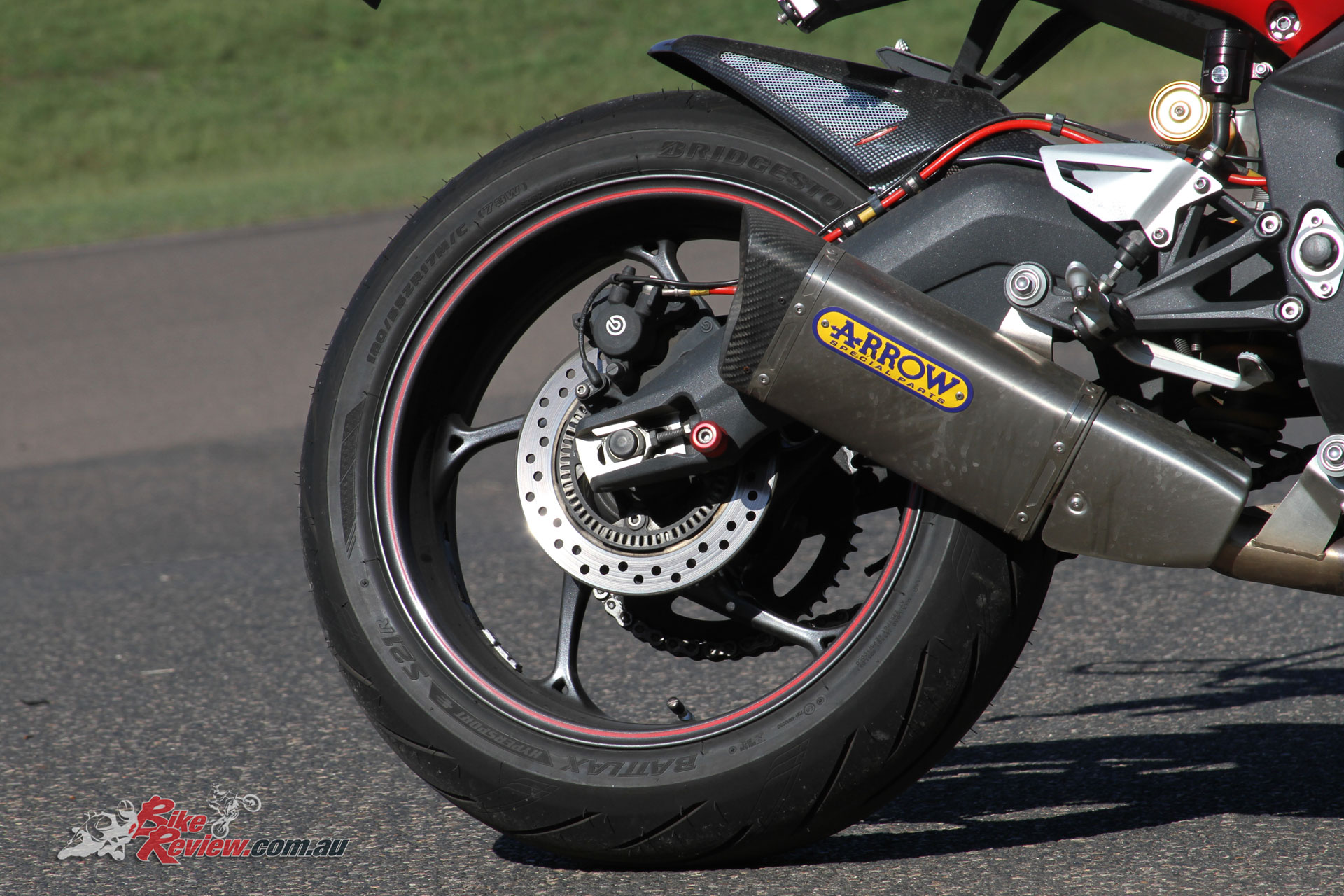 For some context the S21 replaces the S20 EVO, offering performance and mileage gains compared to the outgoing version, and is aimed at the larger capacity side of the sports market, and sits below the more track/race but street legal RS10. 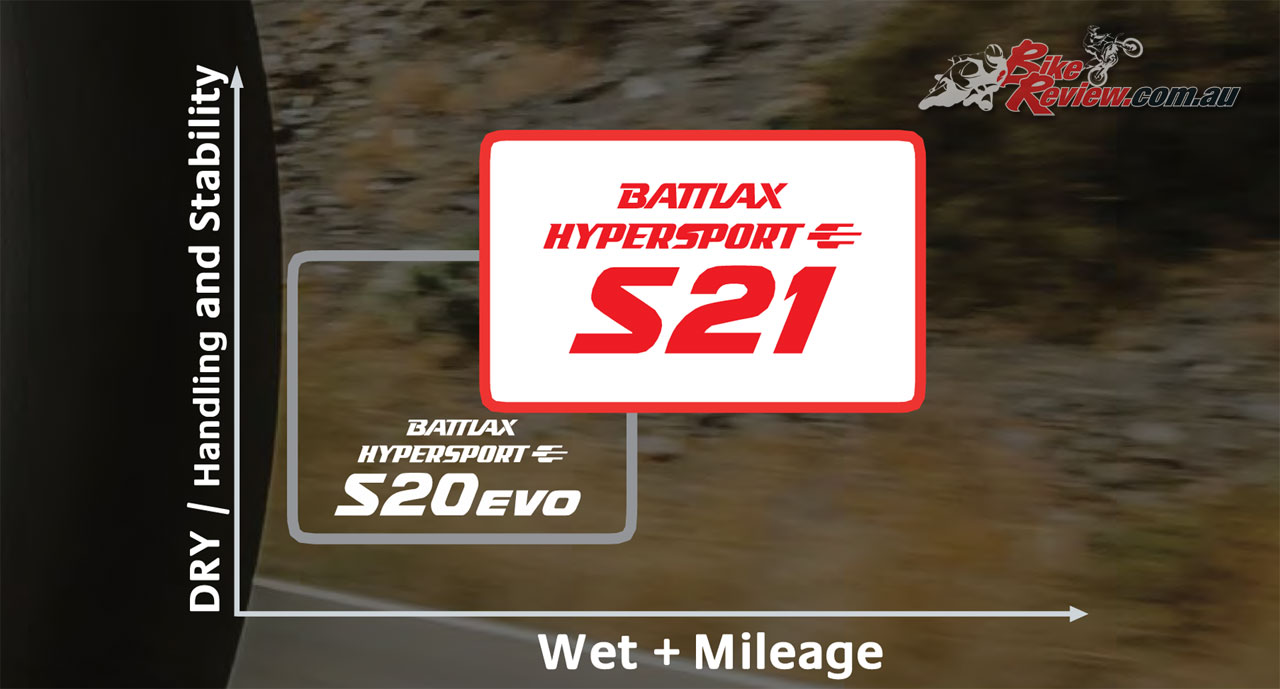 The S21 offers a significant improvement over the older S20 EVO, in mileage, and dry grip

Compared to the S20 EVO, the S21 has taken some big steps forward as far as dry performance and wear, with Bridgestone claiming 36 per cent better wear, while dry grip, handling and stability are all also improved. To put their own testing figure on this, Bridgestone claim a two-second gain in lap times at the Sugo test track. Wet weather performance is largely on par with the S20 EVO, so you’re also not trading off anything in this area. 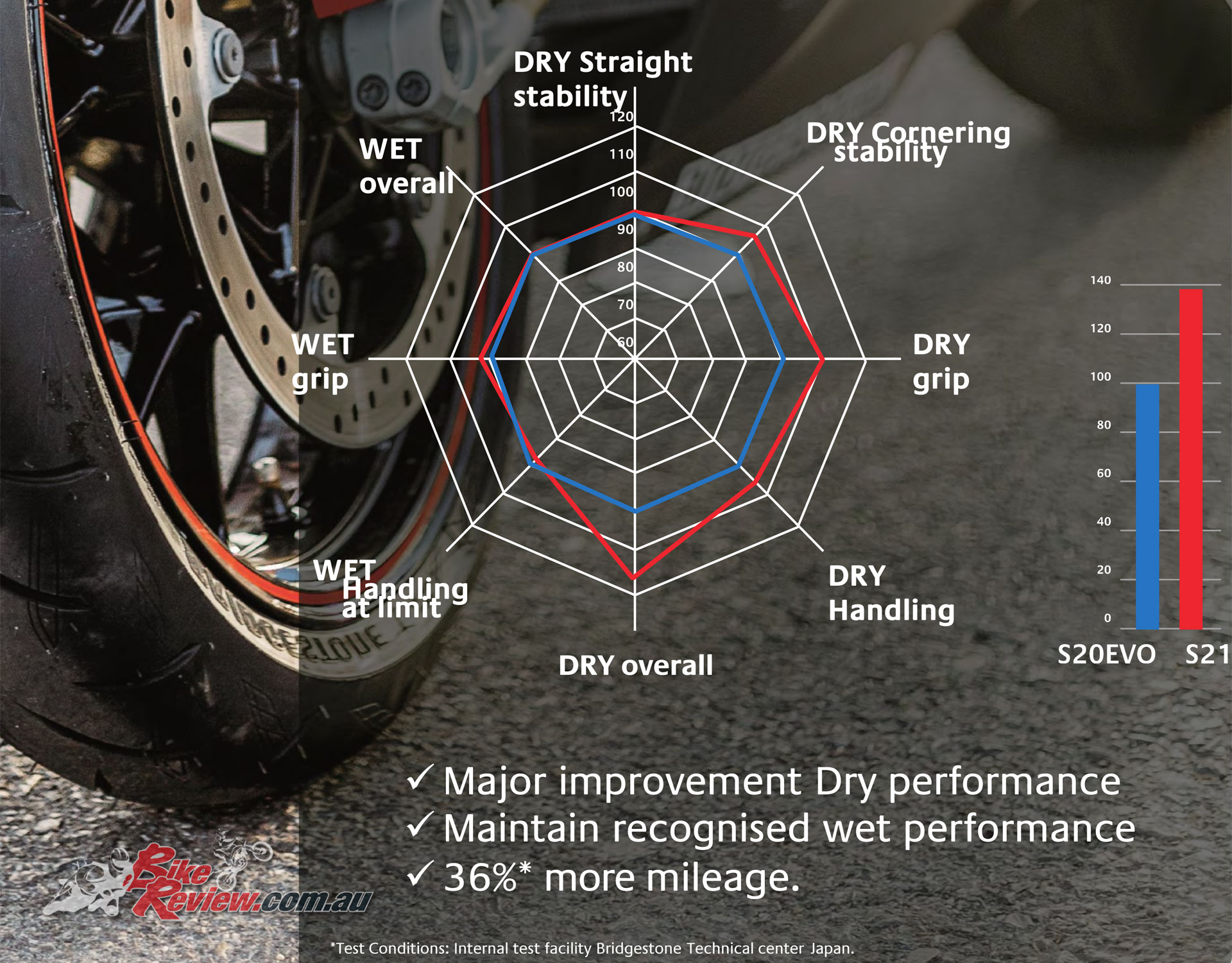 For Bridgestone’s in-house comparison check out the graph

The front tyre features two compounds, and the rear three, which is in line with the new generation hypersport tyres, which can really maximise performance and wear across the tyre by designing for the specific demands of each section. Where the front features a smaller crown to sharpen steering, the rear goes in the opposite direction, with a larger crown designed to improve stability cornering, while reducing slip. 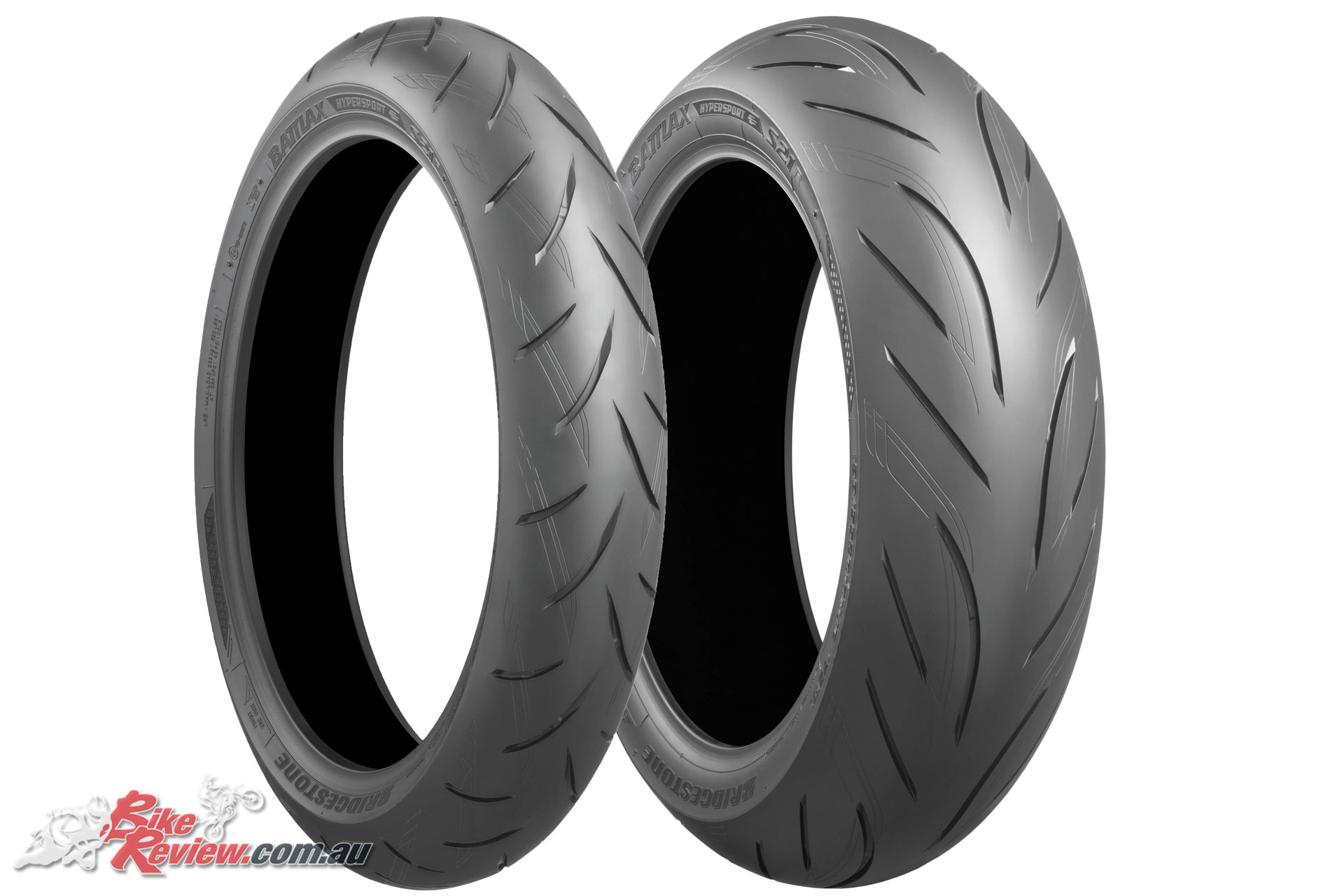 The Bridgestone Battlax S21 front and rear are available in 10 sizes, four front, six rear, see below for the chart and pricing

A new shoulder compound is featured on both tyres, allowing for greater cornering speeds, particularly with the sharper front crown profile and hence the improved track testing lap times. The groove, or tread positioning has also been updated from the S20 EVO with the sea to land ratio tweaked quite significantly as to where it’s positioned across the tyre.

Bridgestone Battlax S21s in the Wet

Picking up the bike up from having the Battlax S21 tyres fitted at Northside Motorcycles, where I take my bike for anything I don’t want to do myself, the heavens immediately opened and it basically bucketed down for the next week. The centre of the tyre was scrubbed in, thanks to the shop doing a quick test ride, however the shoulders were decidedly green, and stayed that way for the first 500km or so, with the usual freeway commutes doing little to further the scrubbing in process. 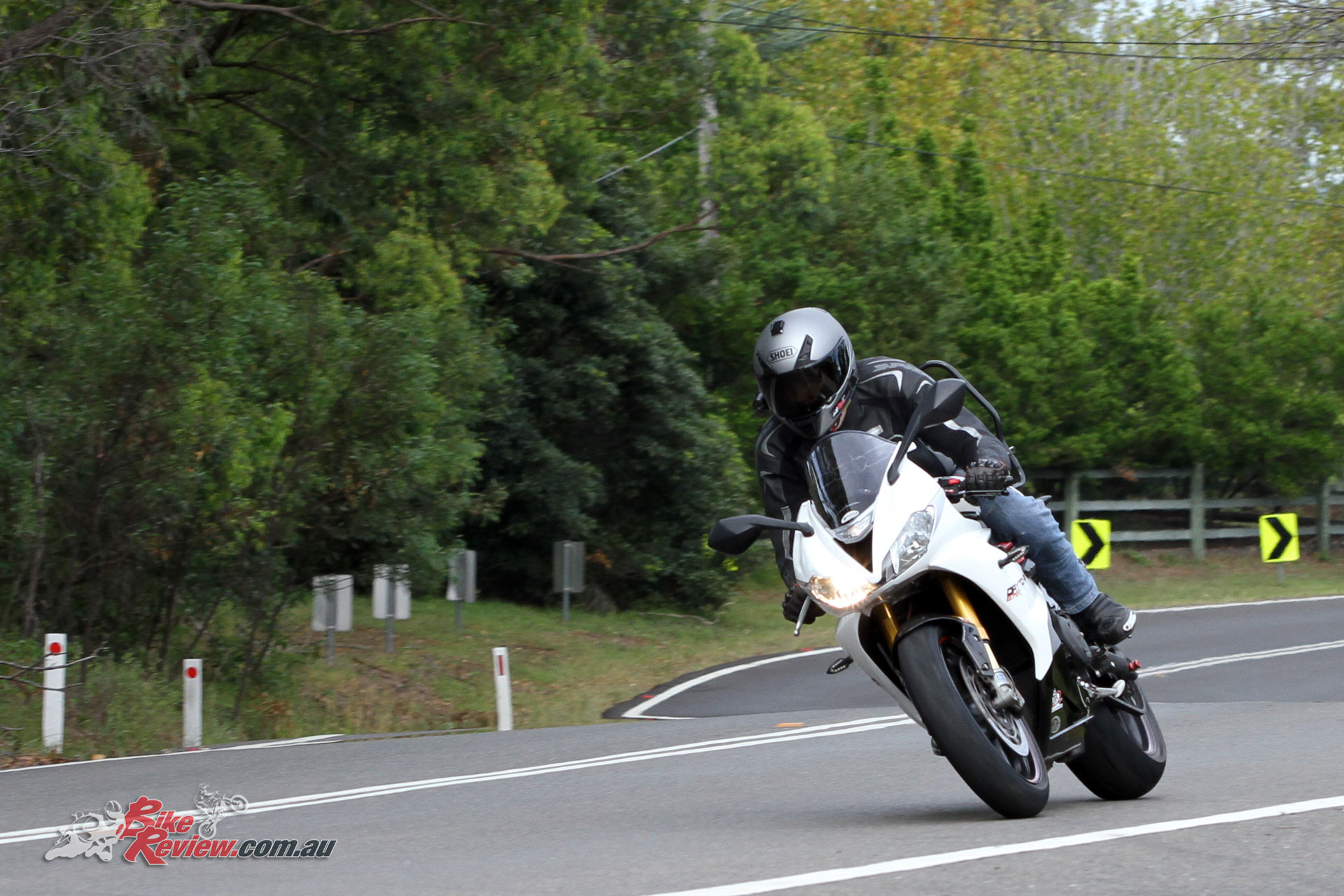 The first full week with the S21s saw constant rain, which was annoying but proved their wet credentials

For all that, wet weather grip has proven strong, and while it was still mild weather, warm-up times were quick enough that I never felt like I needed to hold back when it came to the morning or evening commute. The usual avoidance of the grease slicks between tyre tracks was all that was required, with road snakes no concern.

In the wet with the tyres properly scrubbed in, as long as they are warm, the grip and confidence are such that I’m not making any real concessions to the weather for my general riding, keeping mind I’m not out canyon carving in the pouring rain. There’s no train tracking across mismatched road surfaces or road snakes either, so overall my expectations in the wet were very well met.

Bridgestone Battlax S21s in the Dry

As for the dry, as soon as the clouds blew over it was time for the usual testing route, taking the Old Pacific Highway out of Sydney, scrubbing in the tyres, and getting a feel for the new rubber. Instantly noticeable was the more aggressive profile compared to my outgoing sport-touring set, making for a more exciting ride when you’re having fun through the twisties. 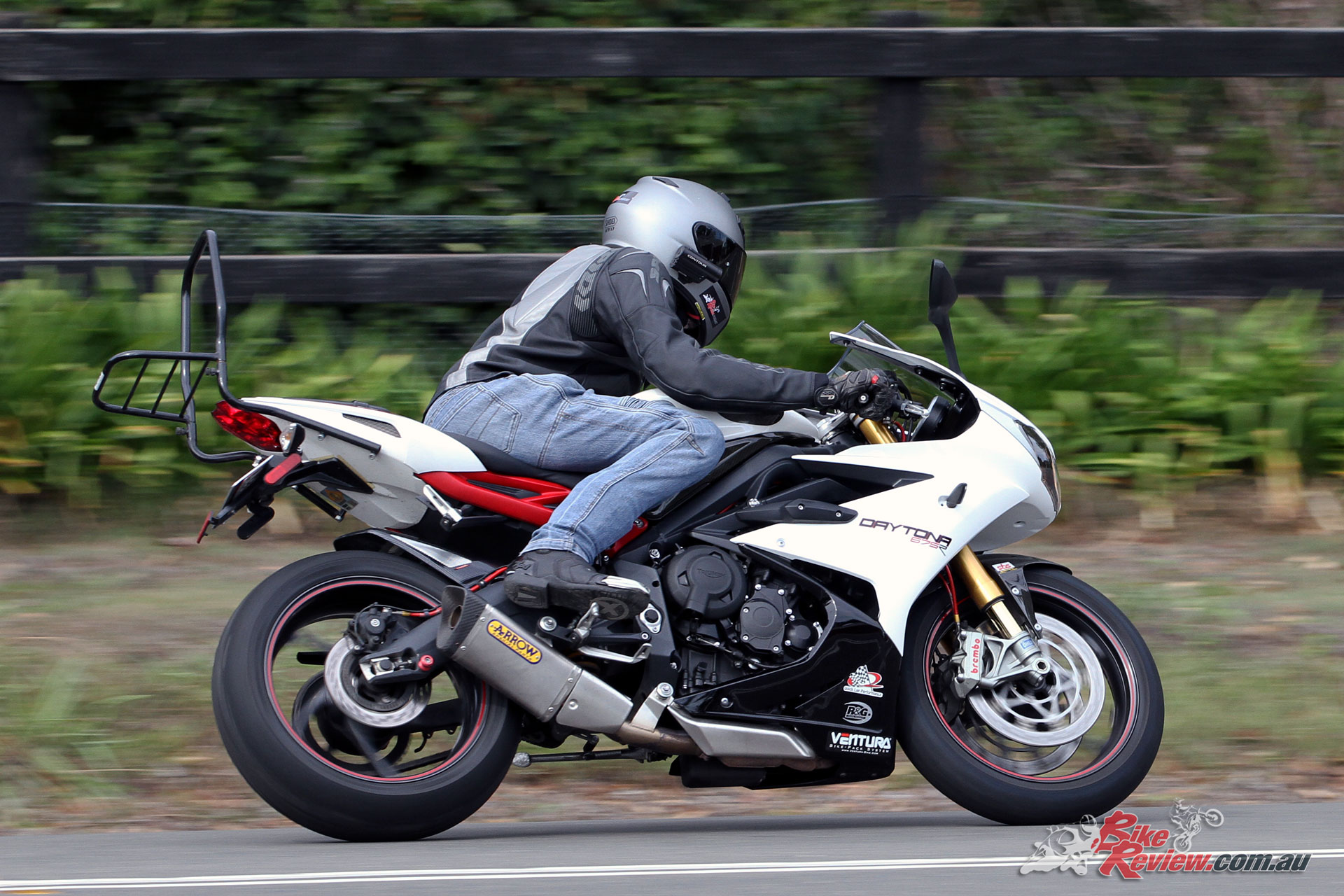 While this felt like the tyre falling onto the side quite quickly at first, having spent more time with the tyre now, it’s an entirely natural affair, with a good linear transition from upright to leant over, that doesn’t demand any force.

Stability and confidence mid-lean is also a real strong point, whether that’s on the track at full lean, or on the road, where you’re probably exercising a bit more caution and not as far over onto the tyre shoulders. At the same time I also found it easier to make small corrections mid corner as necessary with the S21s, while getting back onto the throttle is always confidence inspiring. 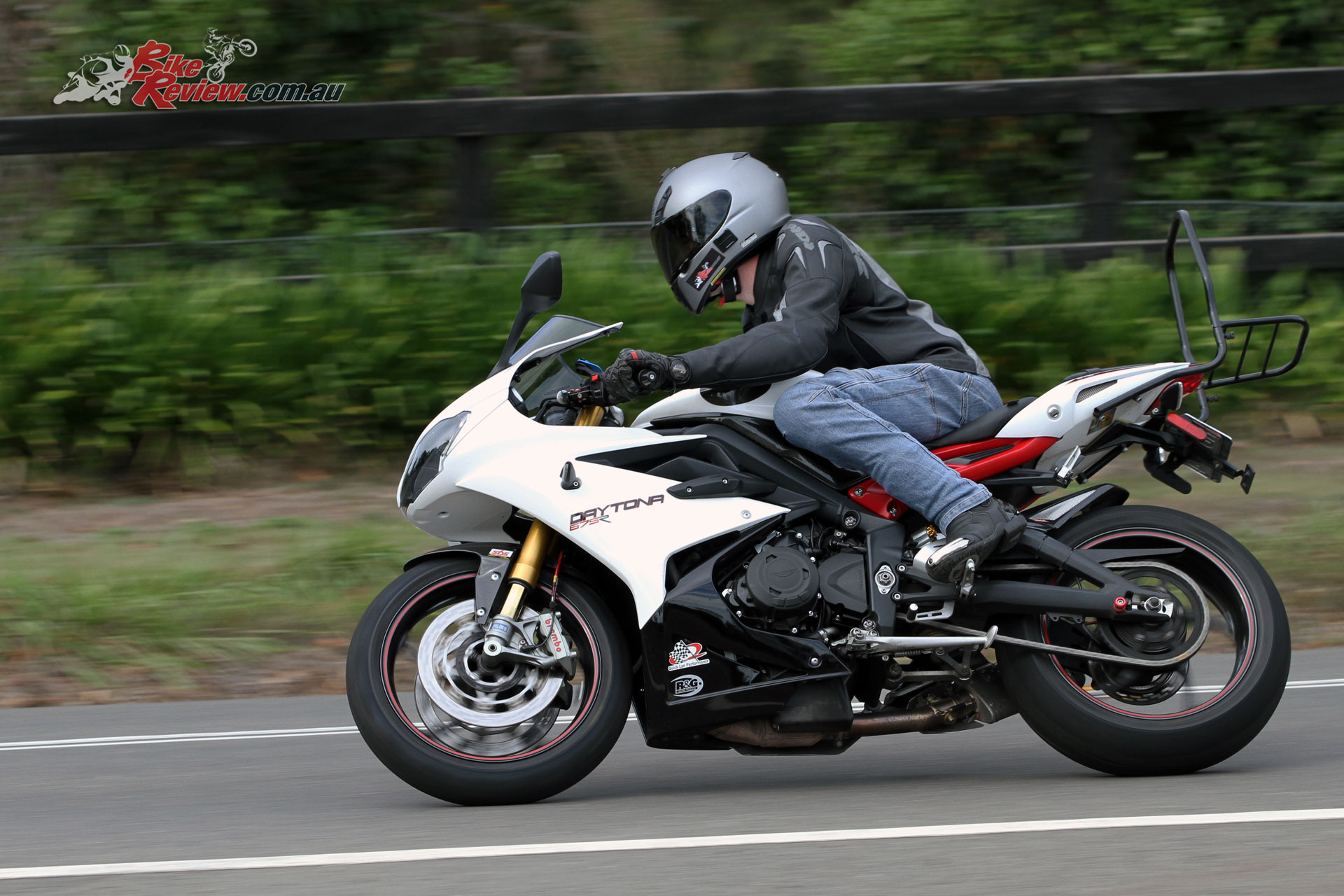 Freeway riding, which makes up much of my daily commute also highlights the good straight line stability, as well as the great wear properties of the tyres, with 1500km completed so far, and wear minimal, with the tyre’s markings still only slowly fading away.

Bridgestone Battlax S21s at the Track

When it comes to the track, I’ll leave the full write-up to Jeff, who’s got a lot more experience on these particular tyres in these conditions, especially for those after a racer perspective. Here’s my 2c however… 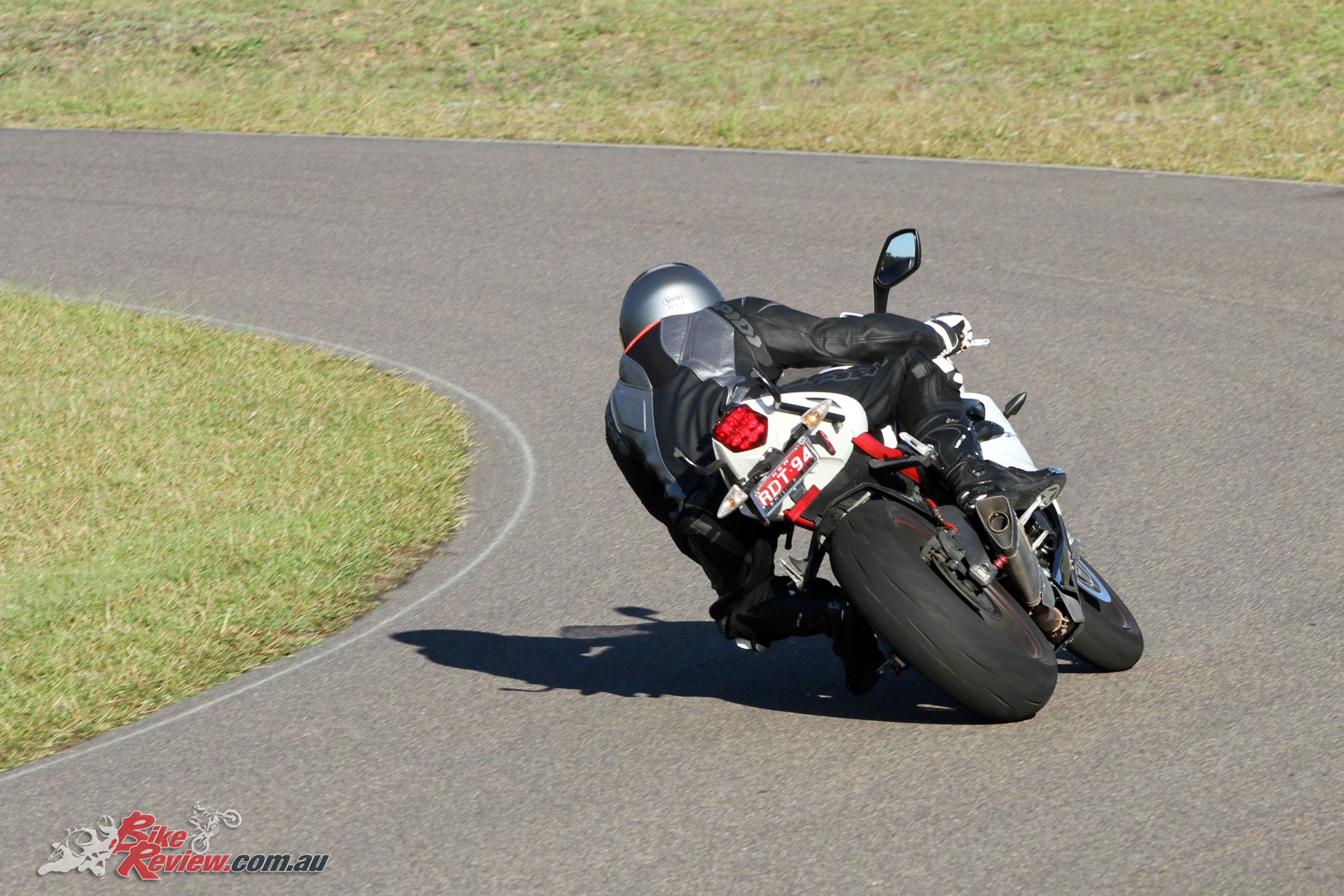 On the track confidence at high lean angles is great, with strong grip

As an everyday rider myself, and infrequent track day rider, I found the Battlax S21s extremely confidence inspiring. I spent a couple of hours doing lots and lots of laps and warm-up times were extremely quick. There was good stability while hard on the brakes, or while trailing the brakes into corners, matched by good support when starting to roll the throttle back on as the bike comes upright.

Transitioning to full lean was effortless for my pace, with the tyre profiles offering a linear and neutral experience, with the ensuing grip at full lean very confidence inspiring, although the track surface in question is renowned as being exceptional, and my pace wouldn’t be pushing the tyre itself to the limit. 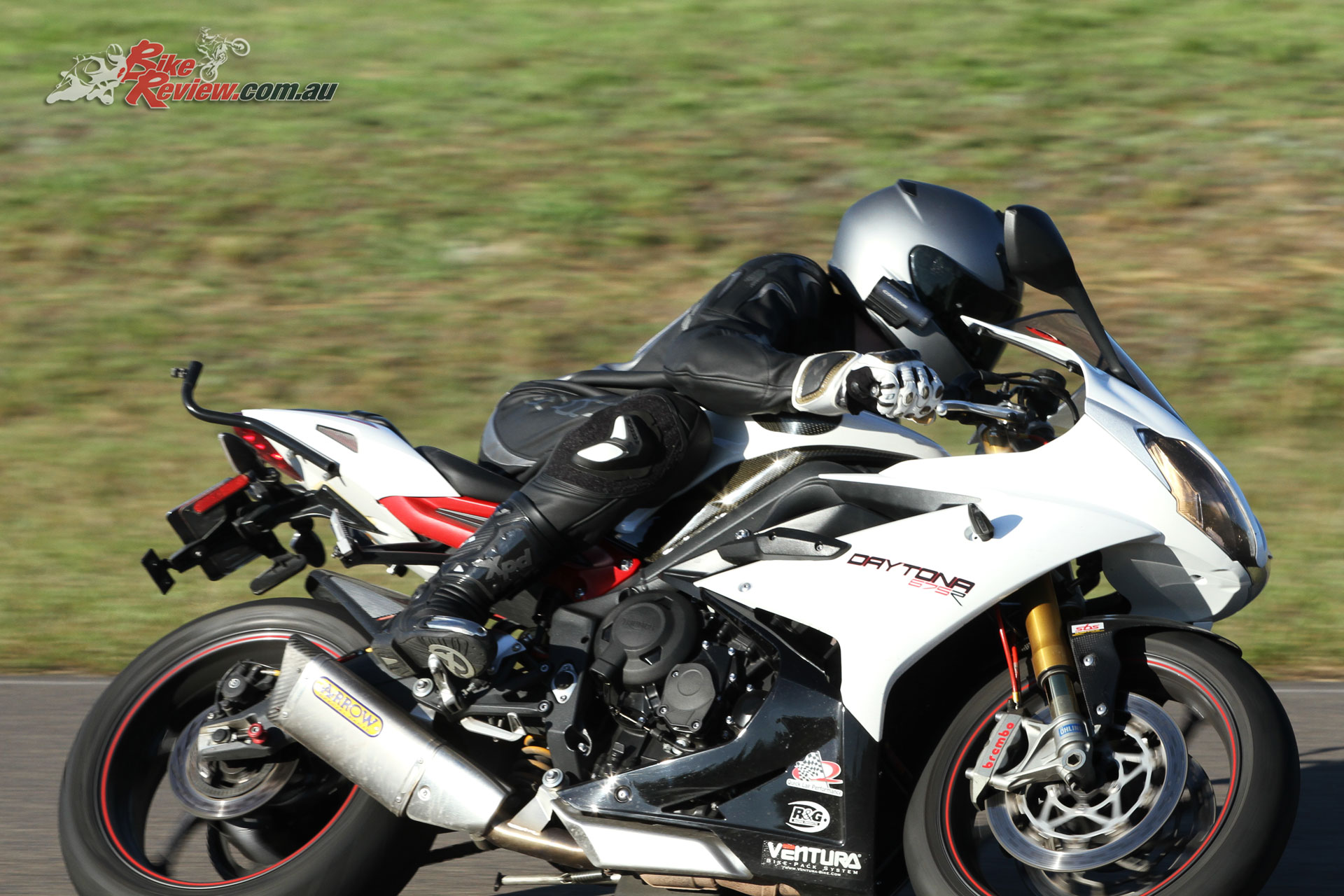 All up I’m really looking forward to another day at the track with these tyres, and the road wear and performance have been exemplary.

I’ll do a longer term update on wear, and ongoing use in the months to come!

I had a quick session on the S21s at The Farm and have to say, they are a huge improvement over the S20 tyres that were released around 2012 and also a step up over the S20 EVO, that arrived a few years later, with the S21 arriving in the last few years, the first time we sampled them was on the GSX-S750 when Kris attended the launch. 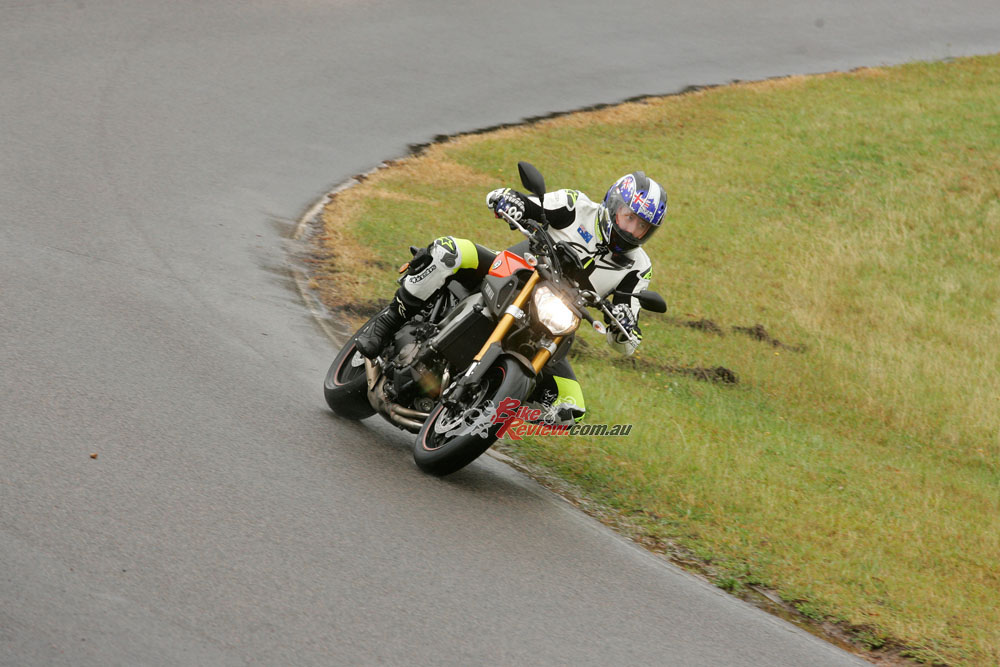 The S20 were a sports tyre aimed at the high mileage road rider that did the odd track day at a mild pace. They were 80 per cent road mild sports, 20 per cent sports so to speak. As good a road tyre as the S20 was, I found it was really limited on track and at fast sports pace on the street, the front lacking feel and feedback and edge grip the main negative of the tyre. And with a really broad, and necessary, operating temperature range the S20 never really improved as things warmed up. 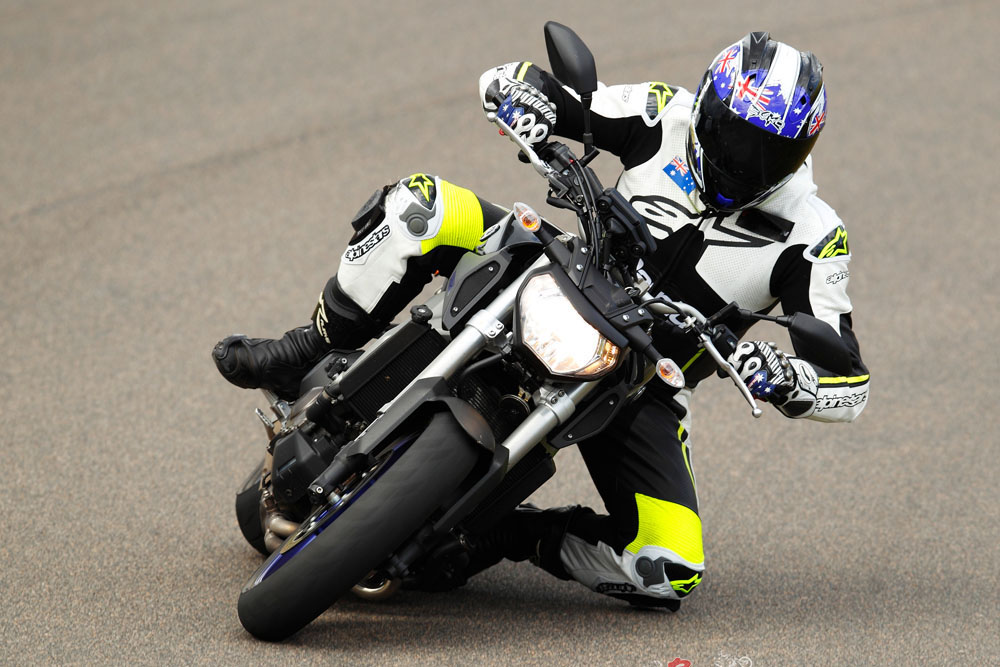 I recall one particular launch where all but one bike was fitted with S20s and after a few sessions the half a dozen or so journalists present, myself included, were lining up for the bikes not fitted with the S20s. That was a middleweight bike. However, the first MT-10 had S20 EVOs fitted at the launch and they were fantastic.

That other launch experience was here at The Farm, where I have since ridden on the S20 EVO and now the S21. The improvement of the S21 over the S20 is huge. 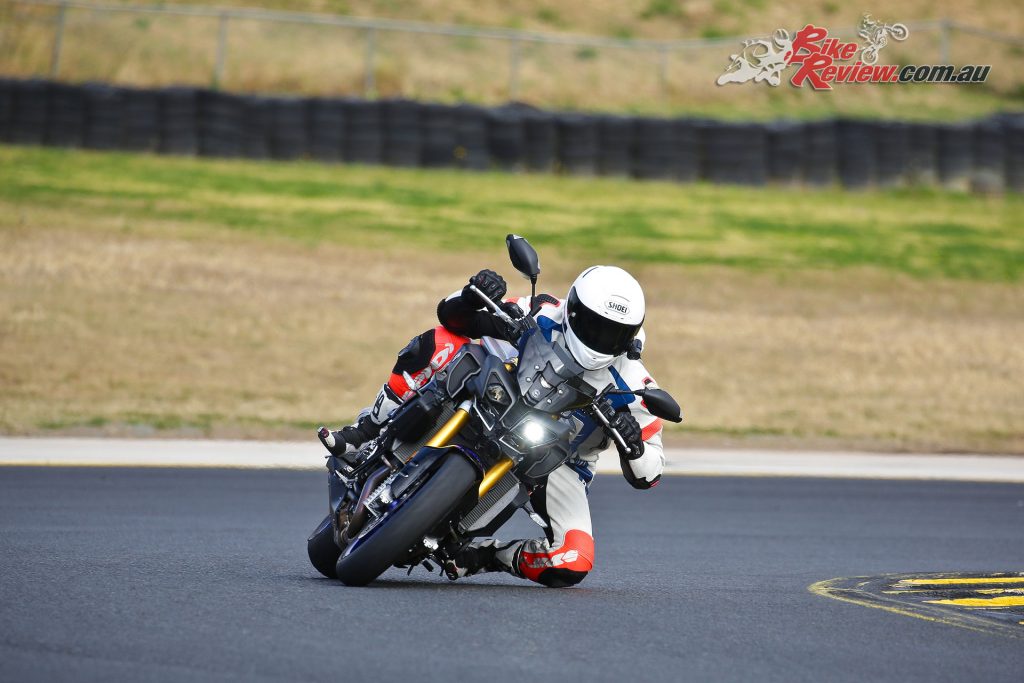 The major improvement I noticed immediately was front tyre feedback, which I felt was lacking in the S20. The feedback from the S21 is more intimate and reminds me of the RS10, which I have also used a lot at The Farm and praised its front feel and edge grip. Bridgestone have done well to bring that confidence into a high mileage road tyre, so ticks there. Under heavy braking, there is good stability in the tyre, even when trail braking hard into a turn, in fact, that side footprint just seems to grip more and more the harder it is pushed, opposite to the S20, which would tuck without warning. 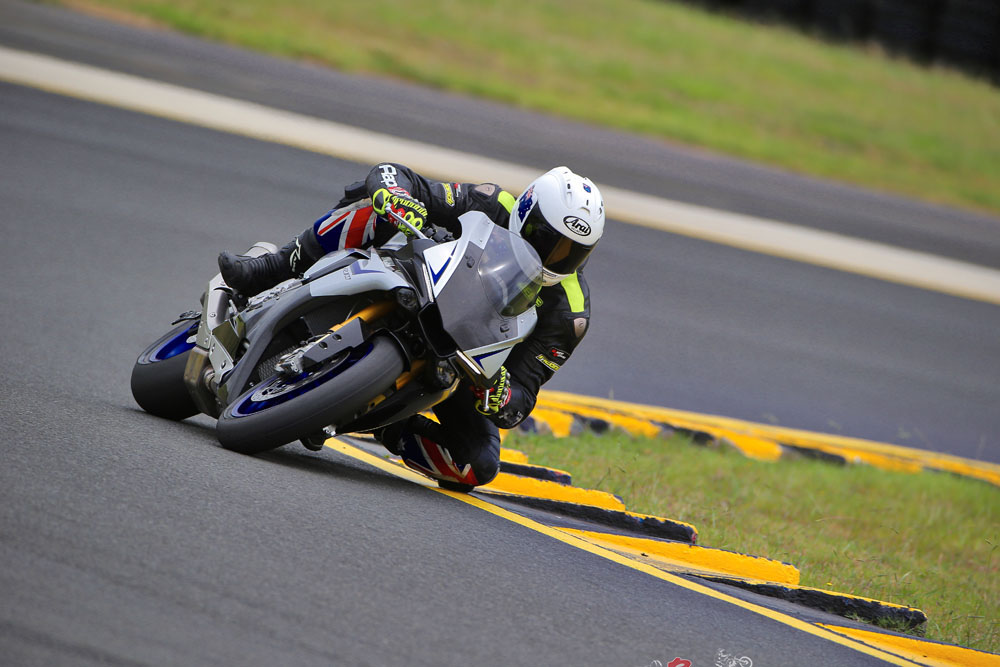 Testing the Bridgestone RS10 on the YZF-R1 SP

The other improvement is in direction change, the S21 may be a more triangular construction as aggressively flicking the bike from full lean to full lean is fast and effortless, with instant edge grip. Lastly, the front S20 would lost side grip when the throttle was opened hard in a corner, while the S21 stays planted. At the rear, there is more drive and grip and again, lots better feel.

The rear didn’t suffer any sidewall pump hard on the gas, although this was on a Supersport bike so I can’t comment on what it would be like on a bigger capacity more powerful machine. Also, the bike had just been ridden for a few hours by Kris when I jumped on and pushed straight away, so I was impressed there was no tyre overheating at all and wear was impressive on the day as the surface is known to be abrasive.

Overall, I rate the S21 highly, as a great track day tyre and a big step forward over the S20s. Jeff. 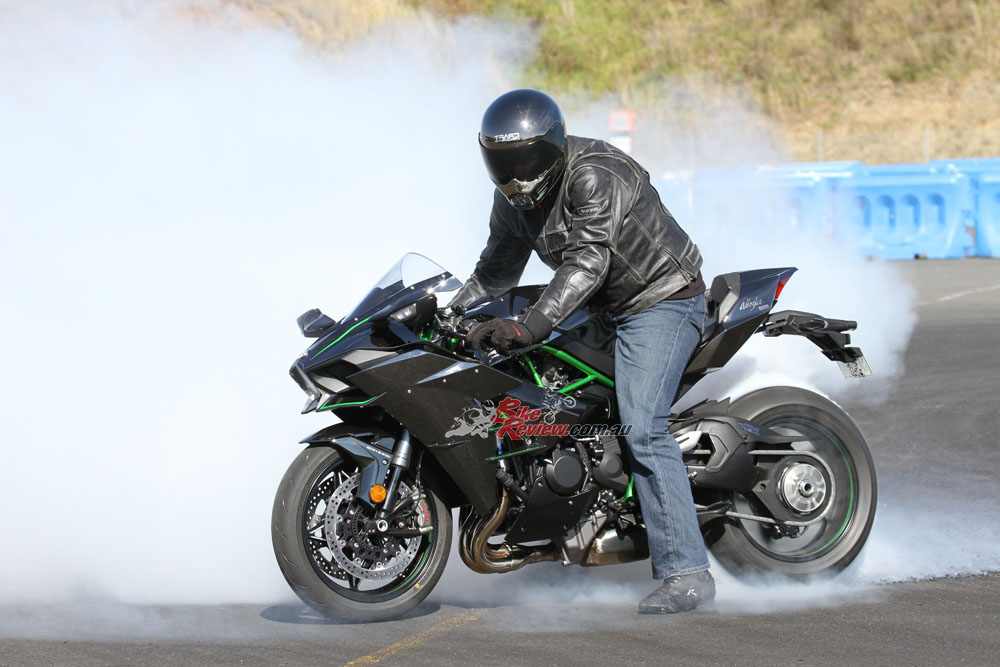 Bridgestone motorcycle tyres are distributed by McLeod Accessories in Australia, check out your local Bridgestone stockist for more information, or see the Bridgestone Motorcycle Tyres website, See the pricing and range available below.

The S21 replaces the S20 EVO, offering performance and mileage gains compared to the outgoing version, and is aimed at the larger capacity side of the sports market, and sits below the more track/race but street legal RS10. 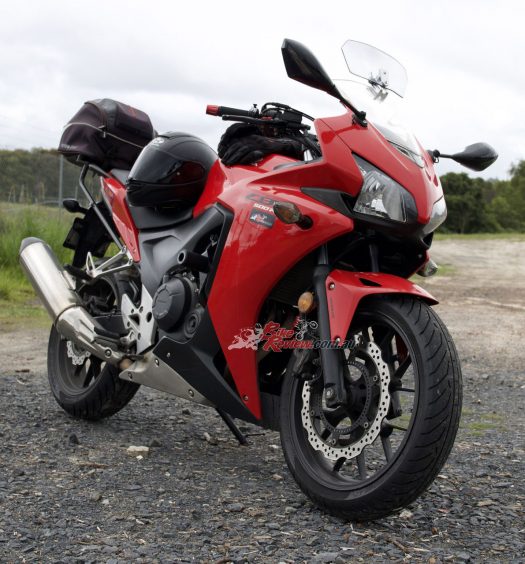 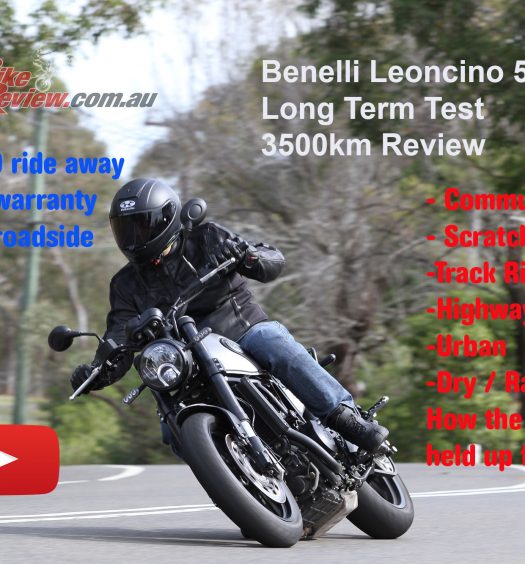