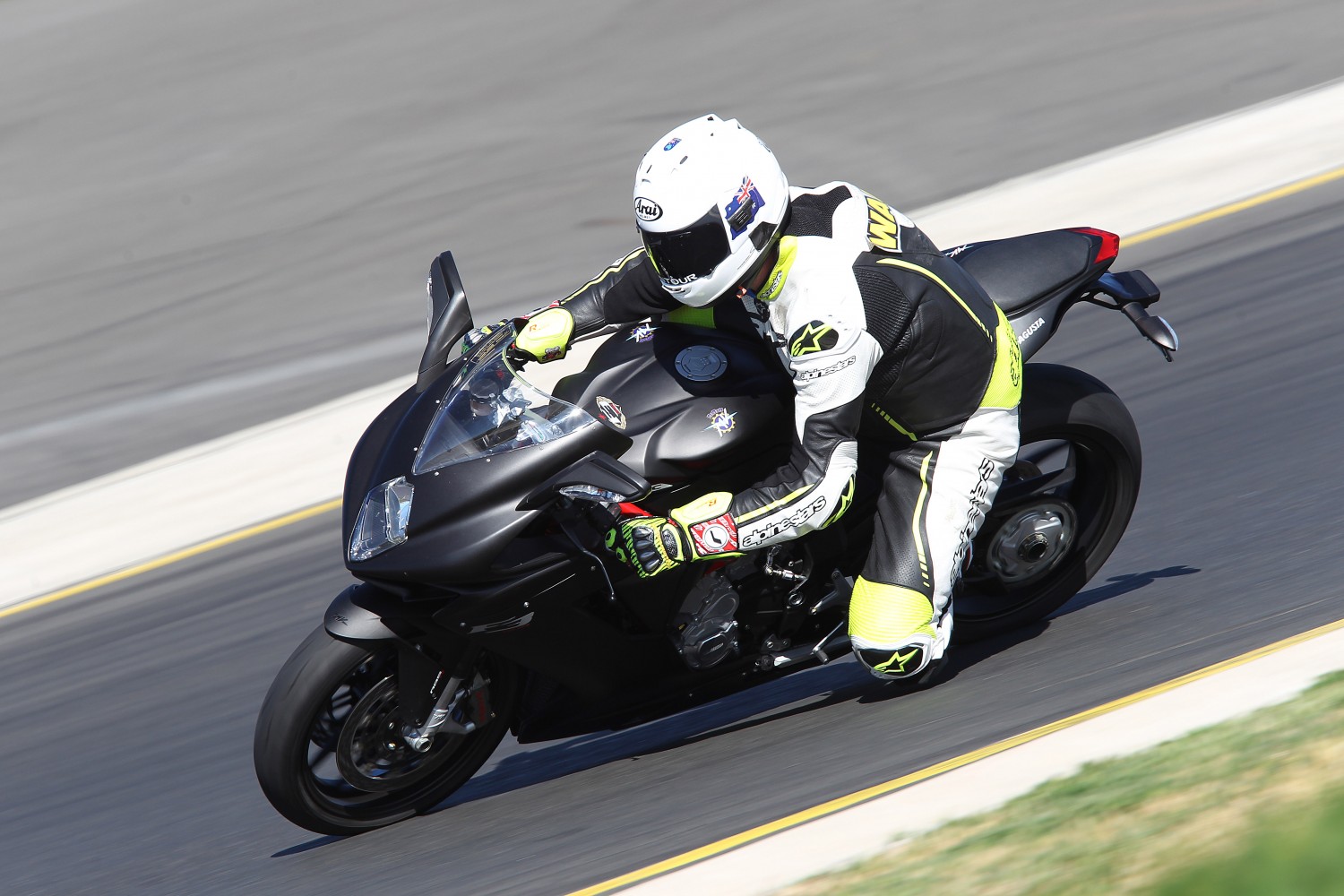 MV Agusta’s F3 is really something special and that’s a statement I make having ridden not only the F3 but also the Ducati 899 Panigale and the GSX-R750, the current competition for the 800.The F3 800 just oozes raw sex appeal, with a note at idle that has an edge suggesting the possibility of grin (and police chase) inducing performance at the flick of your wrist. 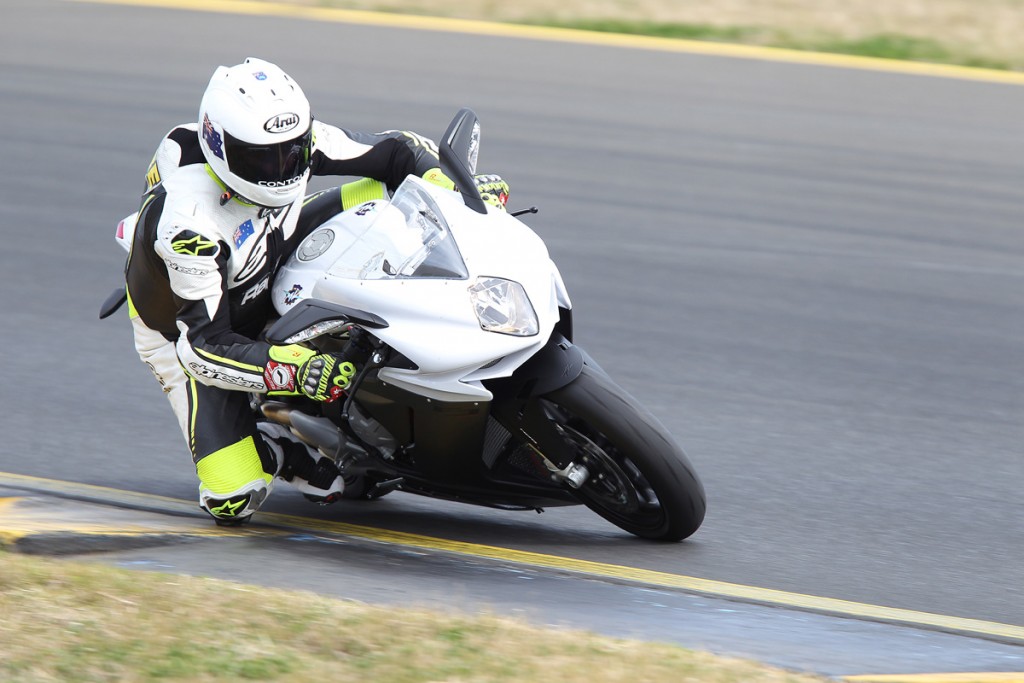 The bike is super compact, perfect for my 180cm height and proportions, with my knees falling into the molded tank and reach to the ‘bars easy, with an aggressive pitch that helps me become part of the bike, rather than a passenger on it.

Torque from a standstill is easily fed on via the RbW and MV Motor & Vehicle Integrated Control System (MVICS) and develops quickly and effortlessly, with the engine spooling up and accelerating the F3 away with incredible drive. Gearing is tall and power just keeps building, until I snick into second thanks to the quickshifter, with the speedo reading 70km/h in first gear and the gear change more a matter of habit than any necessity.

Part of the appeal to the 800 is that it’s almost the same as the 675, apart from having considerably more power and torque. The rev limit has been brought down from 15000 to 13500rpm as a compromise but the bike’s weigh exactly the same amount and the 800 is adept at delivering power and torque in a manner that ensures, as a road bike, you’re in a happy place.

Opening the throttle the acceleration is blinding with a triple howl developing and levels of performance I’ve come to expect from superbikes, not machines sitting squarely between the 600 and 1000cc machines.

The engine is reminiscent of the Rivale, but both rawer and more controlled, with the RbW system managing the engine both on and off the throttle in a much more forgiving fashion. There’s no throttle-chop and the transition on and off power, and on and off the slipper clutch is smooth and controllable, with the bike rewarding smooth rider inputs and planning ahead in spades. 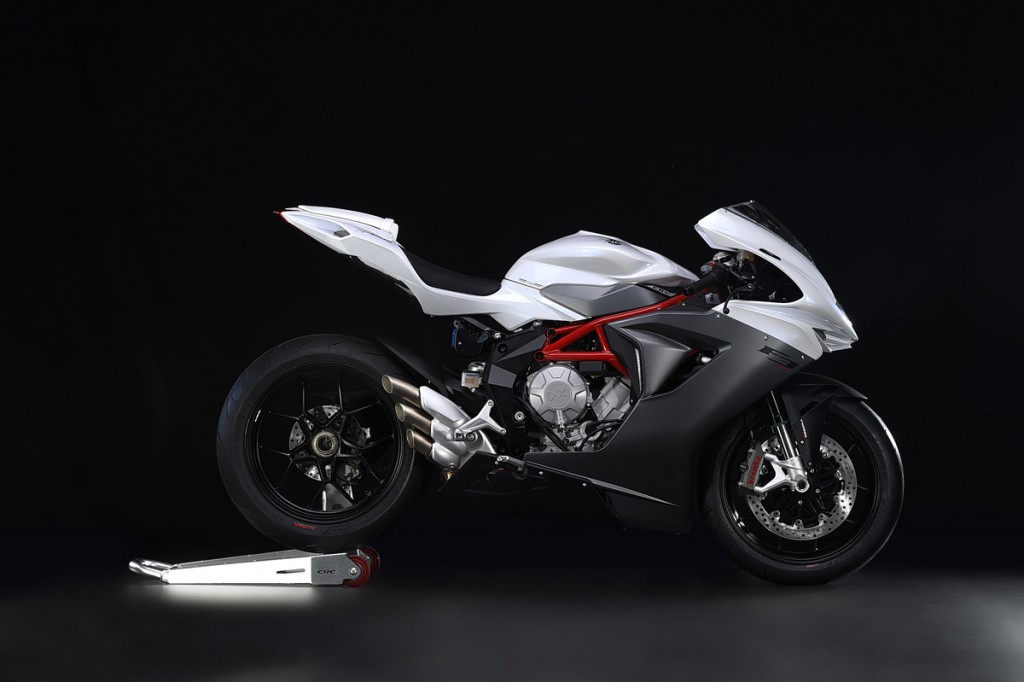 When our group is split by an incredibly slow moving vehicle that I didn’t quite make it past during an overtaking lane, I ready myself for an overtaking maneuver. It appears and I open the throttle and shoot forward with tremendous acceleration and drive, easily leaving the dawdler behind but hitting a considerable bump in the road surface. The F3 bucks, the hard seat doesn’t provide much cushioning but the bike’s already settled and I’m moving on, with the main thought left in my mind being just how seriously quick this bike is.

The 798cc triple-cylinder is an absolute gem but it’s joined by an impressive chassis and suspension set-up – which while on the firm sports side, combines with a short wheelbase to provide telepathic steering. The fully adjustable Marzocchi 43mm forks handle everything in their stride, while the shock has a bit more kick than I’d like over poor road surfaces, but doesn’t overly unsettle the bike. It’s mainly rider comfort that suffers but it’s also fully adjustable and not set up for me specifically. Having been on various MV Agusta bikes all day I was actually surprised to find the F3 much more comfortable than expected, keeping in mind this is a full on sportsbike.

Cornering is a joy, particularly over good surfaces and the bike’s great agility really sucks you in, allowing you to carry great corner speed with the feeling of running on rails. It’s rock solid and particularly on the road where I don’t like getting too close to the middle line particularly on twisties with poor vision I could easily narrow the amount of road I was using and power through on any line of my choice.

The Brembo brakes are also well suited to the bike, offering great stopping power. Bite wasn’t a standout until I jumped back on my regular ride heading home later that night and realised it was actually deceptively strong with great modulation and the Marzocchi forks really help prevent too much weight transfer on the anchors. 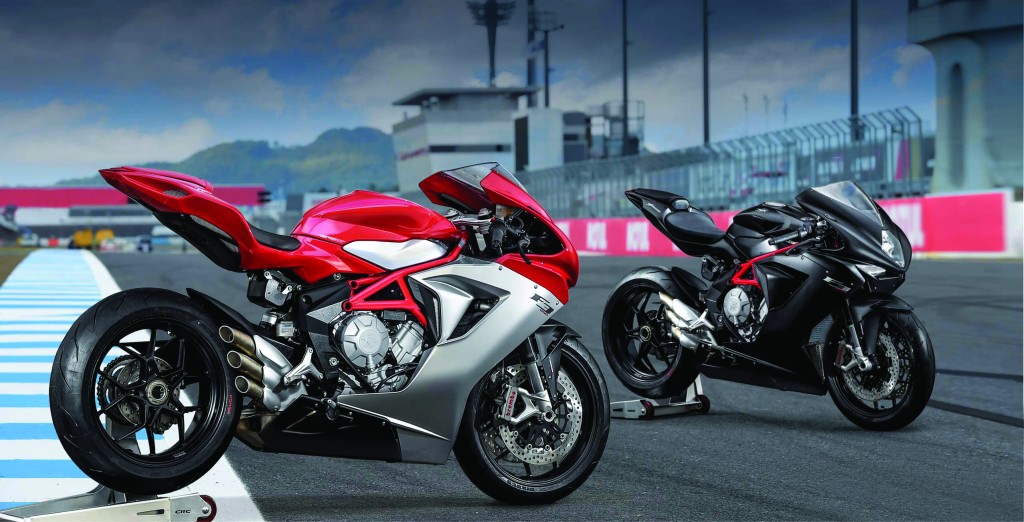 Electronics are a standout in that the RbW system does a great job and traction control and ABS with rear wheel lift mitigation are nice additions. In the dry the bike’s so controllable it’d be rare to need either except over unexpected road hazards however the engine is aggressive enough that in the wet they’ll no doubt earn their keep, especially with the amount of crud on our over-travelled roads. The quickshifter also benefits from a more aggressive approach, shifting too low could feel clunky – keeping in mind this bike was practically brand new, and keeping hard on the throttle seemed to provide the smoothest shifts.

With looks that take me back to first seeing the MV Agusta F4, the F3 800 has the performance to match its looks and is an awesome characterful Italian machine.I didn’t have time to truly test out the electronics package on offer, with just a few hours on the bike using the preset modes, but the huge level of customisability is sure to land the bike in good stead even with the most demanding of riders.
I also wasn’t sure whether the F3 would be as comfortable road as it obviously is designed to be on the track but MV Agusta have done a great job to make it so. 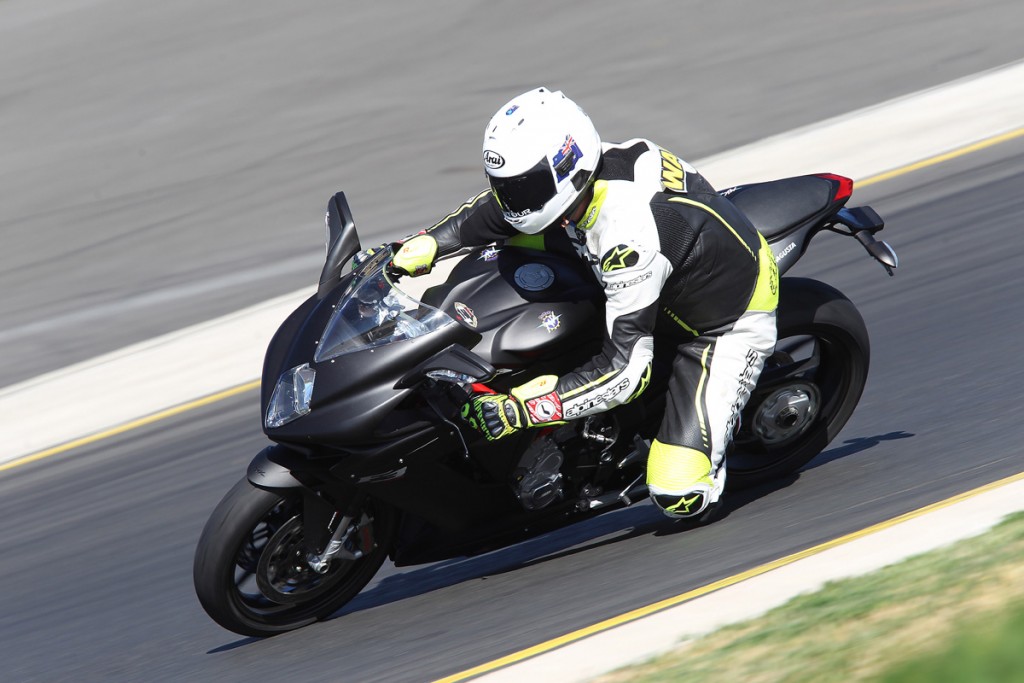 The F3 800 feels just like the 675 to sit on. In fact it shares the same wheelbase and even claimed weight of 173kg. Steering angle is the same and the only real changes are improvements to the Mikuni EMS and the upped capacity due to the stroke being increased from 49.5 to 79mm. Check out our 675 Review here.

I have to admit I was not looking forward to my first laps on the F3 800, as it was only a few degrees at the track and with no warmers and new Pirelli Diablo Supercorsa SP tyres, I was concerned the MV F3 throttle would spit me off in no time.

I needn’t have been concerned, as by the time I negotiated the off-camber tightening radius turn two, I knew MV had fixed the issue. The fuelling and throttle control is much better. Not perfect but much closer to where it should be. This makes the bike nice to ride, the way it should be. I spent the next 15-minutes easing into it on the cold slippery track and the 800 gave me complete confidence.

It handles better than the previous 675s I’ve ridden and the Brembo brakes, Marzocchi forks combo offers up confidence-inspiring feel in the tricky conditions.

With a warm up session out of the way and some temperature in the track, I was able to push a lot harder. First of all, I had the MV technician on hand add a load more front preload front and rear as well as compression damping. The standard settings are soft in the extreme for track use but would be nice on road.

With much better balance and support, I put my head down and the 800 woke up like a sleeping pit bull terrier!This bike is fast, agile and most importantly really good fun to ride. It goes where you look, steers where you want it to steer with accurate intuition and has fantastic mid corner manners. Turn-in is fast and accurate on or off the brakes, upright to full lean is progressive and smooth and then the bike happily sits on its side through the turn. You can get on the throttle very early thanks to the tractable nature of the counter-rotating crankshaft engine. There really is no need for traction control as the bike hooks up like it is on qualifying slicks.

The riding position is neutral and comfortable and keeps you relaxed, particularly your arms, and the footpegs did not touch down once.The quickshifter was OK without being great, and could do with a shorter kill time between shifts in the lower gears. Engine braking I found a little too heavy into the slower corners but fine everywhere else. 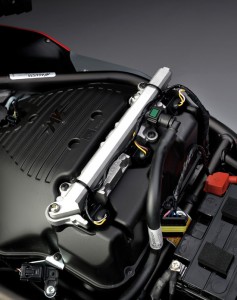 ENGINE
The F3 800 features a three-cylinder, four stroke engine with DOHC and four-valves per cylinder. Compression is a higher 13.3:1 compared to the F3 675, while stroke is 79mm. The rev limit has been lowered to 13,500rpm.
Power is up to 148hp at the crank, with three 50mm throttle-bodies – one per cylinder – with two injectors each serving to deliver fuel and controlled by the Mikuni RbW and MVICS system, with an increased rate of flow over the 675.
Valves are titanium items to reduce weight and a counter-rotating crankshaft was adopted to reduce directional inertia, making for a more responsive ride.
The compact engine also features a closed-deck shell-cast crankcase with integral bores, with water and oil circuits incorporated into the crankcase, with internal pumps.
To deal with the additional power of the 800 the clutch was also revised with an additional two clutch plates and is cooled by engine oil, while performing slipper duties and controlled via a cable. 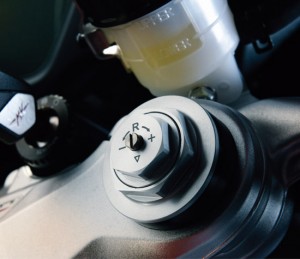 CHASSIS
The F3 800 uses the same ALS steel tubular trellis frame with cast aluminium side-plates and aluminium alloy single-sided swingarm as the F3 675, with the bike’s claimed 173kg dry weight exactly the same as the lower capacity model. The Brembo front brakes are radial Monobloc M4 units with beefed up 34mm pistons, which in turn has meant the Marzocchi spring rates are revised over the 675 to take into account the greater braking force.
The Marzocchi forks are 43mm USD items, offering rebound, compression and preload adjustment, with the Sachs rear shock offering the same array of adjustability.
The rear brake caliper is a two-piston Brembo item and is mated to a 220mm rotor.
Aluminium alloy 10-spoke 17in wheels are found front and rear, with a 3.50in front and 5.50in rear, taking 120/70 – 17 and 180/55 – 17 rubber.
A short wheelbase of 1380mm and focus on weight centralization both assist in making the F3 800 extremely agile. 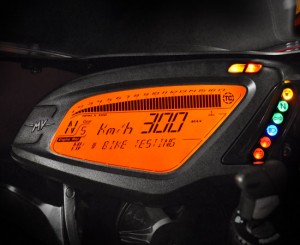 ELECTRONICS
The F3 800 features a huge amount of technology, starting with the Mikuni RbW system, Eldor EM2.0 ECU and Motor & Vehicle Integrated Control System (MVICS), which have been further refined over previous models, with the 50mm throttle-bodies offering greater fuel flow than those on the 675.
Four maps are available – Rain, Normal Sport and Custom, with the fourth allowing for total customisability.
In Custom mode Gas Sensitivity, Engine Response, Rpm limiter, Maximum Torque and Engine Brake settings can all be individually modified, allowing a much greater level of control and adjustability over the bike’s riding manners.
Traction Control also offers eight levels of adjustment and the Bosch 9+ ABS which comes as standard includes rear wheel lift mitigation. The Electronically Assisted Shift quick shift (MV EAS) takes into account rpm, throttle and gear position and calculates the most efficient power cut to allow an upshift, but at low rpm in the lower gears and off the throttle is not always the smoothest.
The digital display is simple and compact but offers plenty of information. 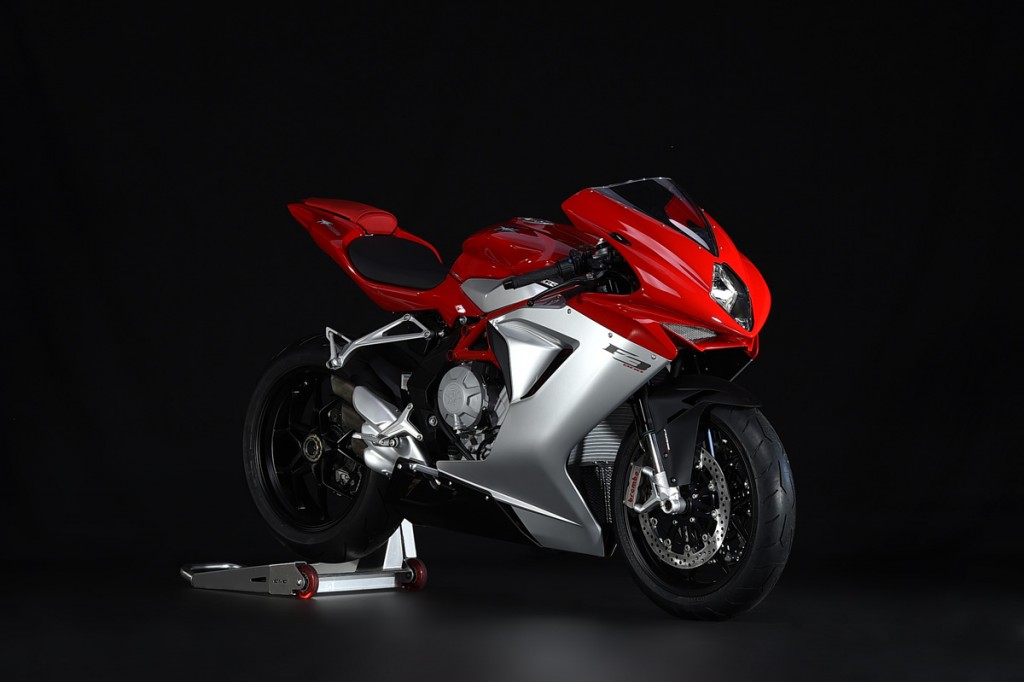 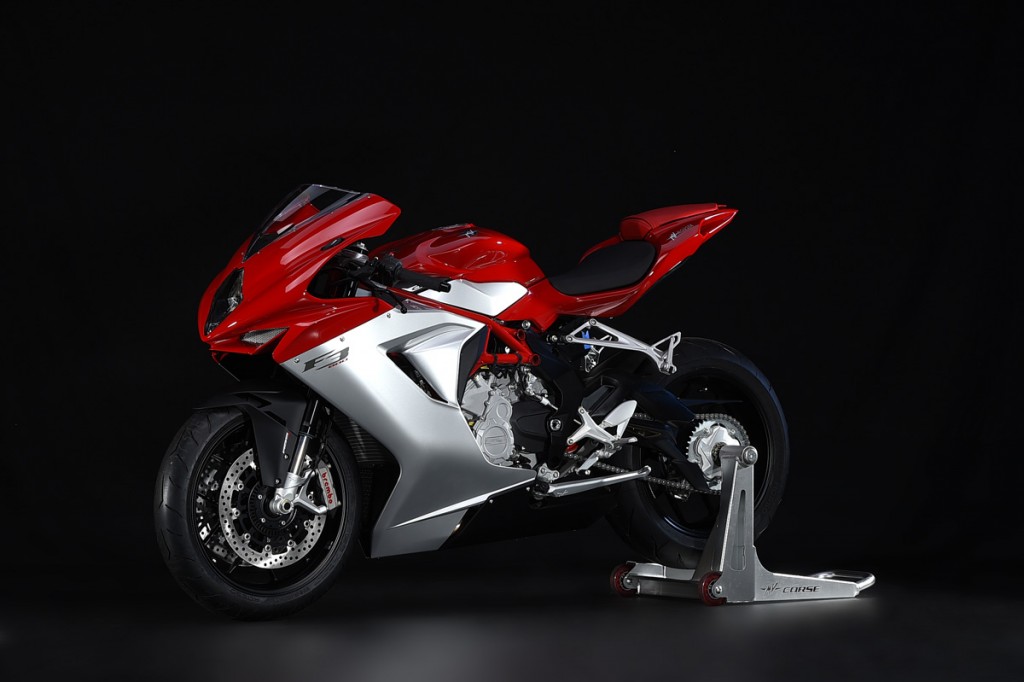 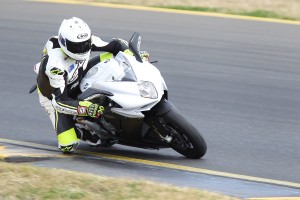 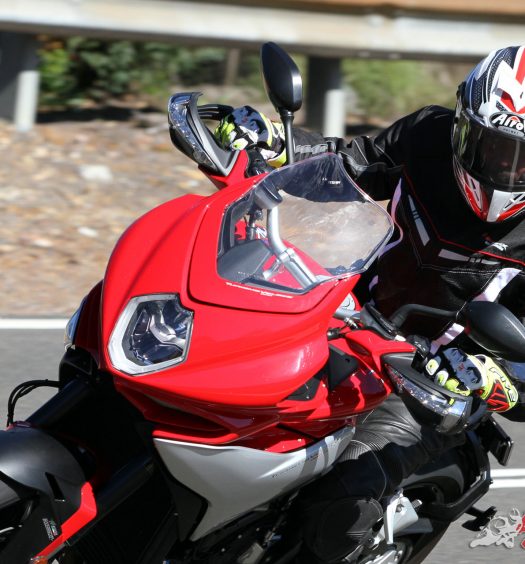