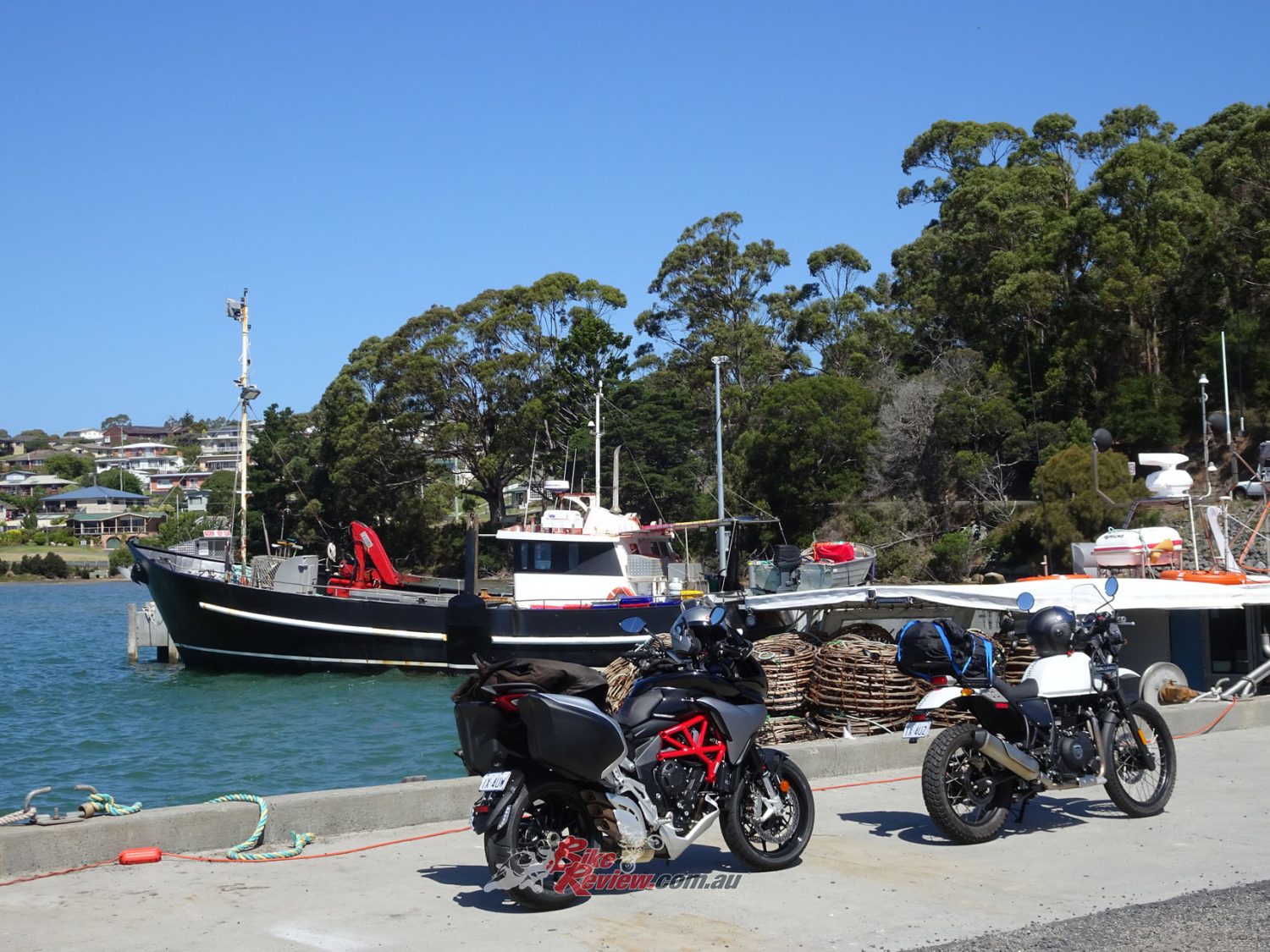 By Peter Thoeming  •  5 months ago

Tasmania is the perfect place to escape to, beautiful wildlife, empty roads and plenty of good food. Check out what The Bear thought of his riding holiday on the Australian island state...

“I went to Tasmania for a story and developed deep vein thrombosis en route. So for the first two weeks I was in hospital getting treated.” – Bill Bryson. So you see, you could go to Tasmania and have a better time than Bill Bryson. 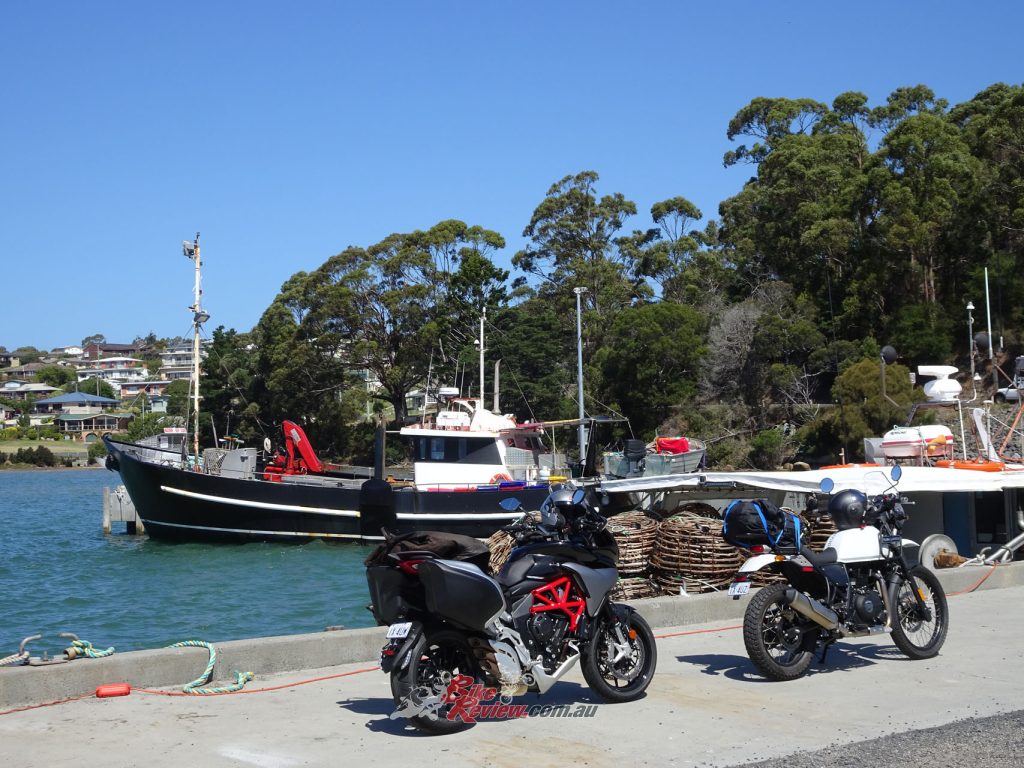 St Helens makes a good stop for food and accommodation. The caravan park is south of town.

Half a ‘lobster’ (Australian so-called lobsters are crayfish) with chips for ten bucks. That was the offer at the caravan on the Bicheno harbourfront. Okay, that was back in the mid-‘80s, but it was one of the things that established Tasmania as a good-value destination for me. More recently, half a cray cost $50 at the Lobster Shack in Bicheno. But there are cheaper meals that are just as delicious, and just as special. Scallops come to mind. But, Tasmania is not only about food. There’s drink as well.

Check out our other Bear Tracks articles here…

We’re not looking at just one kind of drink either, the way we might be in Coonawarra or Clare. Tasmania has outstanding cool climate wines, both still and bubbly. It has an outstanding range of craft beers. And let us not forget that it was the cradle of the nascent Australian distilling industry. Some Taswegian whiskies are already right up there with superior Scotch. But why am I rattling on about food and drink: what you’re looking for is roads and tracks. 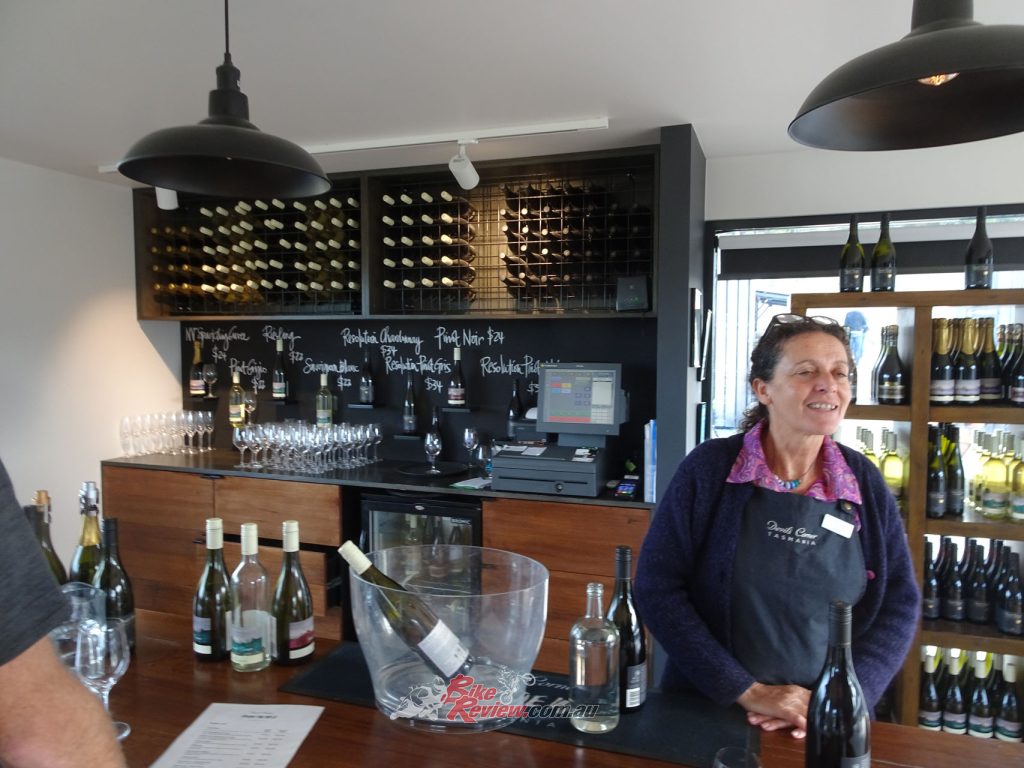 An interesting winery along here is Devil’s Corner. They have a lookout tower and food, too.

Tasmania, possibly called Lutruwita by its original inhabitants, is not short of any of those. Don’t be fooled by maps of Tasmania (yes, okay, we all know the joke) into taking the main roads. There is a lot of Tassie to explore, and a lot of it is off the main drags.

“The west coast of Tasmania has by far the best motorcycling weather in Tasmania, with lots of sunshine all year round.”

Most riders turn left when they get off the ferry. That’s not a bad idea, but don’t just follow the Bass Highway (much of it is boring freeway) to Launceston. Turn left again into Torquay Road before you reach the highway, and follow that as it becomes Frankford Road, all the way to Exeter. It’s an enjoyable road and gives you the option of heading south to Launceston (Lonceston, never Lawnceston) or north along the Tamar River by way of Deviot. 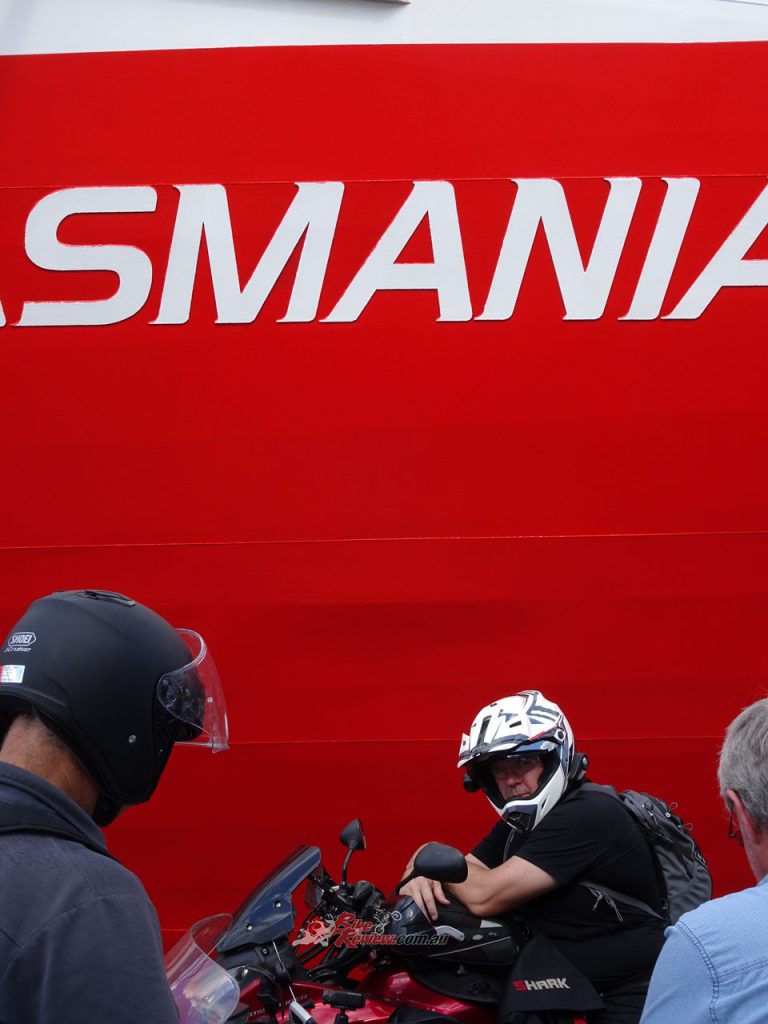 A night on the ferry can be a lot of fun. There are usually quite a few other motorcyclists aboard.

Both directions have things going for them. Launceston has the National Automobile Museum of Tasmania, which specializes in a “display of motor vehicles and motorcycles showcasing Australia’s motoring heritage” and does it exceptionally well. The James Boag Brewery does good tours, and Launceston offers excellent craft shops. The Tasman Highway runs east and is a fun bike road.

Going the other way, the Batman Bridge takes you across the Tamar River. Turn left and then either right into the road to Bridport or go straight on to George Town and the end of the road at Low Head. This is a pleasant, short diversion but you’ll have to come back the same way. 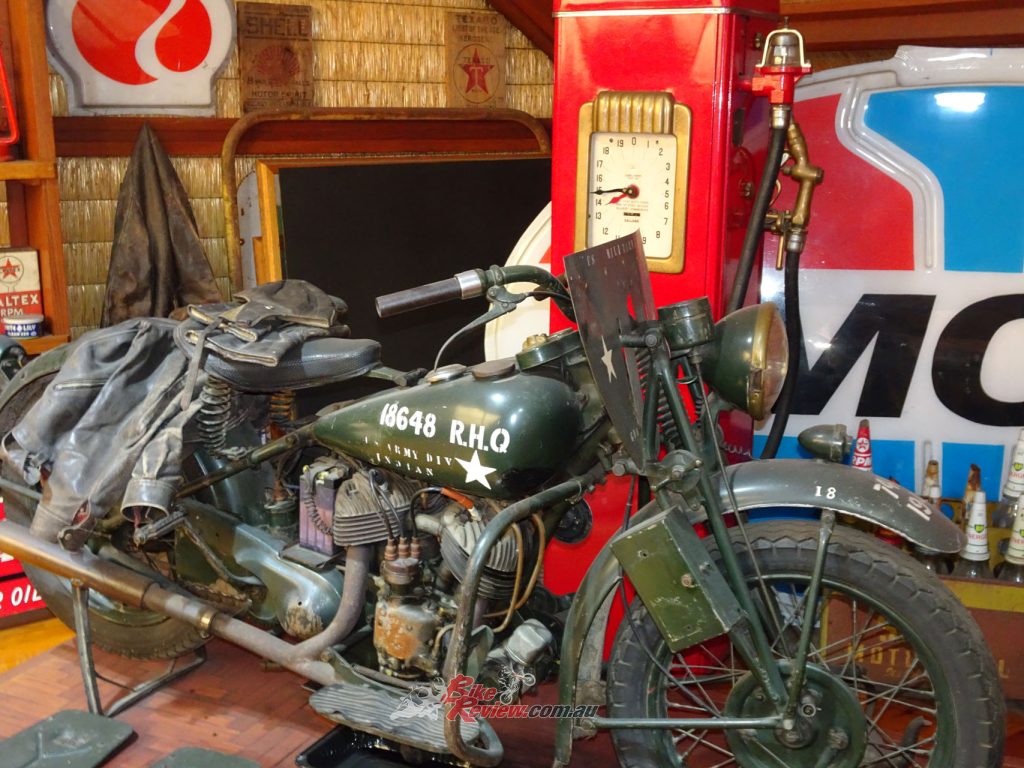 Richardson’s Harley-Davidson museum is an interesting time capsule of the brand in Australia.

Bridport is a pleasant little fishing town and just outside you’ll have options again. Continue east on the remote and quite wild road that will take you back in a loop to the Tasman Highway, or head south to meet the highway earlier, at Scottsdale. The northern loop has 10km or so of good gravel road. Whichever way you go you will have a great run along the highway and pass two of Tasmania’s classic motorcyclists’ pubs, the Weldborough Hotel and the Pub in the Paddock.

Dirt riders will find wonderful tracks both north and south of the Tasman Highway, but beware to the south where quite a few unfenced mine shafts lurk. The publican at the Welborough used to offer advice about the tracks, but there has been a change of owner so I’m not sure now. 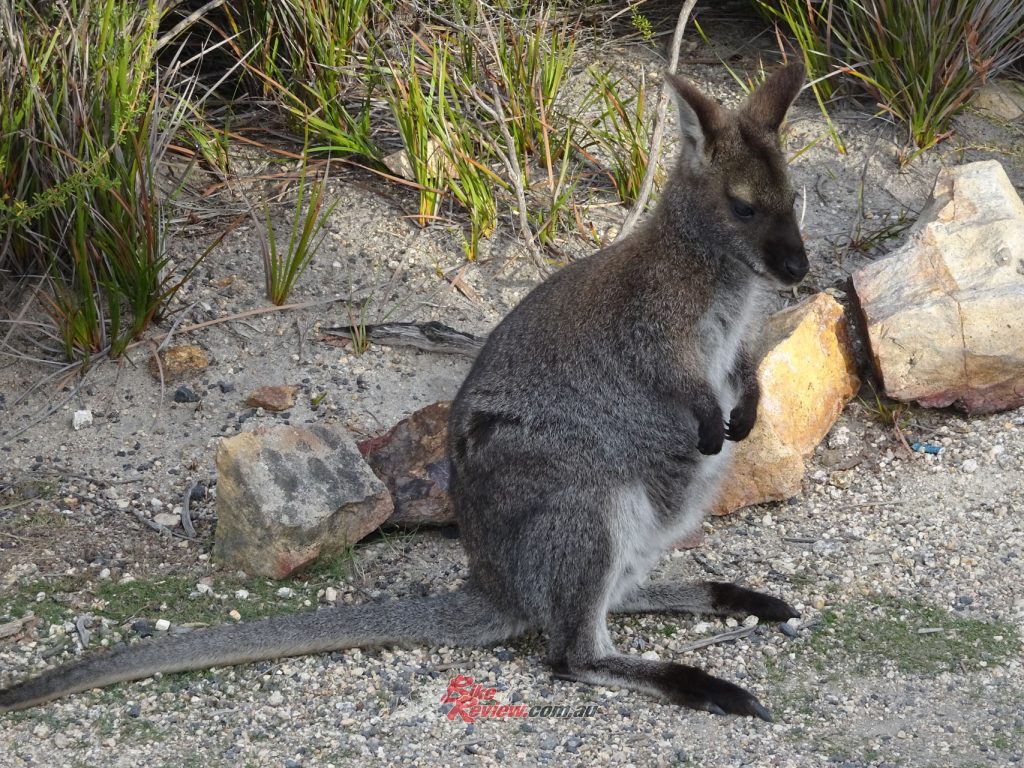 Tasmania is full of wildlife! This little fella popped out to say hello to me at the Cape Tourville lookout.

Eventually the road deposits you on the east coast at St Helens, which used to be quite a tough cray fisherman’s town, but which has mellowed with the tourist influx. From here you follow the so-called Surf Coast south along an enjoyable well-surveyed road. Another choice awaits you here: inland over St Mary’s Pass to St Marys and back down again by way of Mount Elephant Pancakes (Call 0429 783 312 to see if they’re open), or the coast road via Ironhouse Point and the Iron House Brewhaus Café and Bar with its unpasteurized brews and aged Tasman Whisky. The solution to this conundrum is simple: do a loop and double back so you can ride both. There is accommodation nearby if you indulge too much.

Bicheno is the next stop, after another enjoyable ride along the coast. Thanks to its mayor at the time, Bertrand “The Frog” Cadart, this was Australia’s first official motorcycle-friendly town. I like Bicheno by the Bay chalets (bichenobythebay.com.au, 03 6375 1171) for overnight, and a lot of stuff to do awaits you including seeing Taz’s family. There used to be a small motorcycle mechanic’s shop and museum on the way south out of town, but I think it has closed. The road runs inland from here to Swansea. 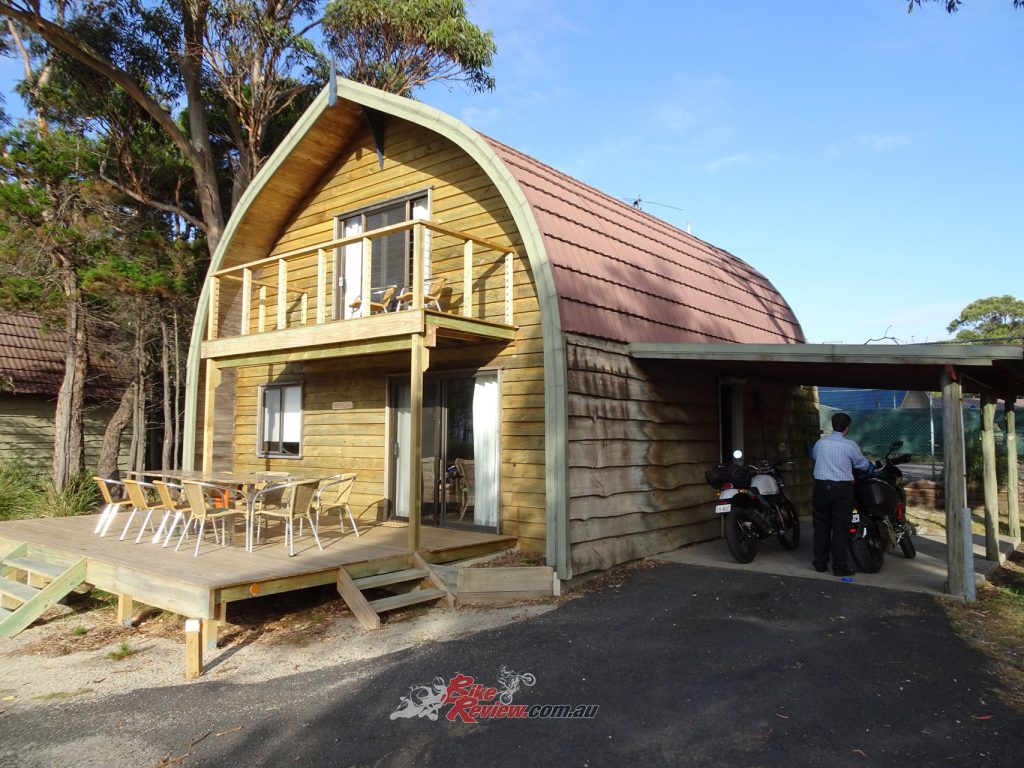 Bicheno by the Bay chalets are conveniently close to town with its restaurants.

Make sure you take the turnoff to Coles Bay, just short of Swansea. Not only is this a terrific and quiet road, but it takes you to the Cape Tourville lighthouse where you can look across the inlet to Wineglass Bay. The scenery is spectacular, and the furry locals are friendly.

Wineglass Bay got its name partly from its shape, and partly the habit of local fishermen of herding whales into it before slaughtering them. Their blood made the bay look like red wine.

The road south from Swansea follows Great Oyster Bay and offers long, wide sweepers pretty much all the way to Triabunna. A word to the wise: you might think that the island does not have any Highway Patrol, but you would be wrong. Know what I mean? There are lots of trails inland of the road, but stray out of the Buckland Military Prohibited Area. Then there is another enjoyable road through Buckland to Sorell where choice raises its head again – Hobart or Port Arthur? Your pick. There’s lots more to enjoy! 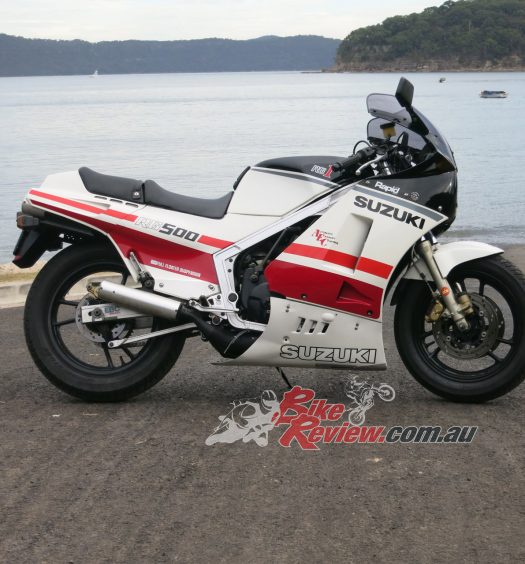 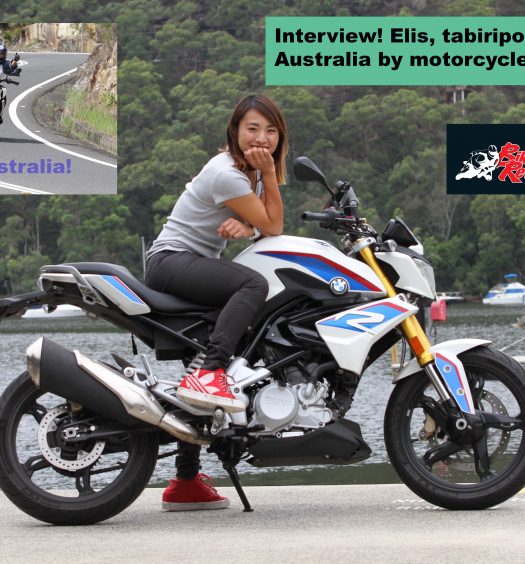