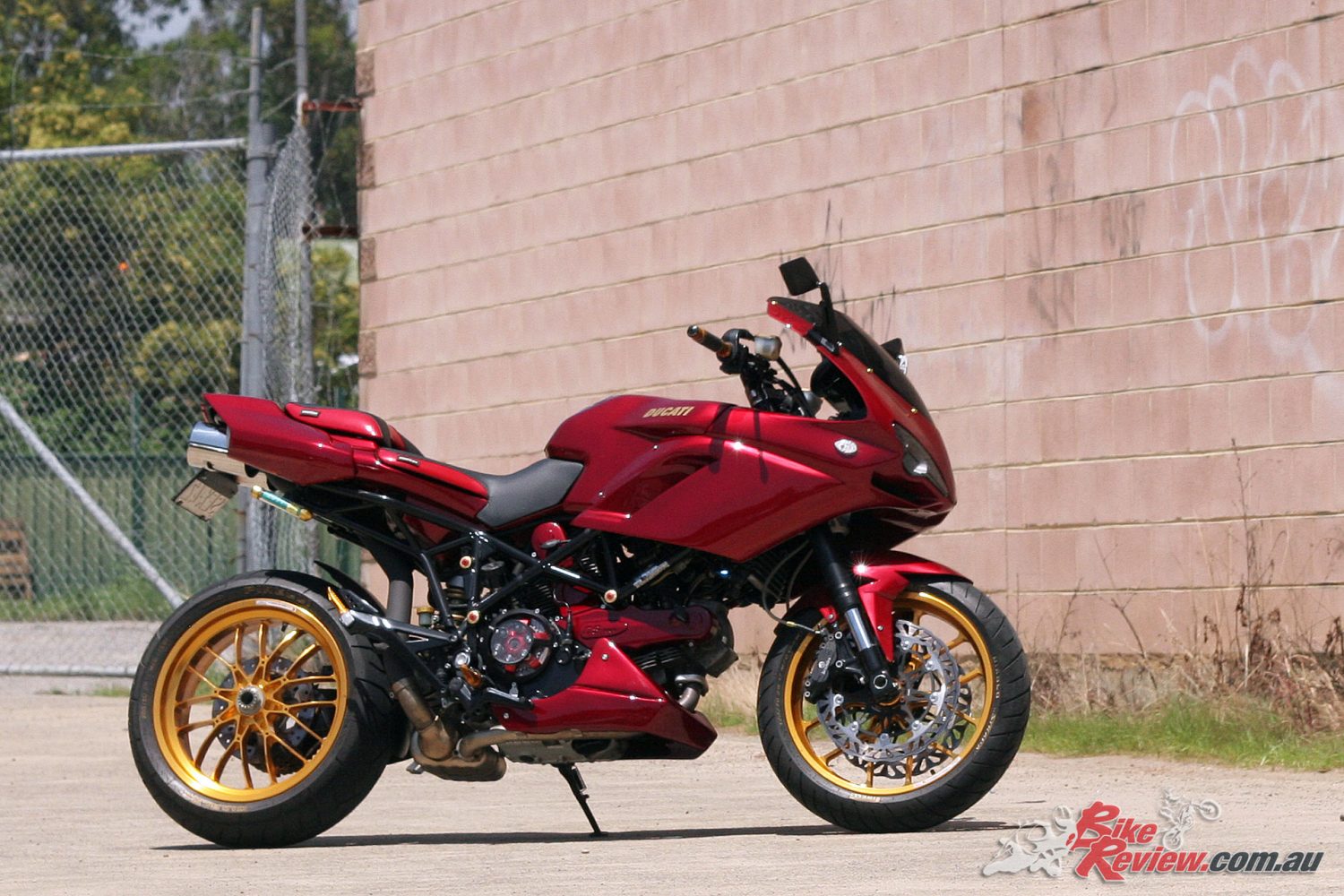 This radical custom Ducati Multistrada was well ahead of its time, as a sports-tourer with the tall adventure-like riding position and sharp styling. Words by Simon Harris, Images by HMC Photography

Individuality is one reason why this hybrid Ducati Multistrada exists. Jean-Claude, who has been an avid modifier for years and has had numerous custom bikes featured in magazines, demands, “I am always wanting something out of the ordinary… something not too common.” 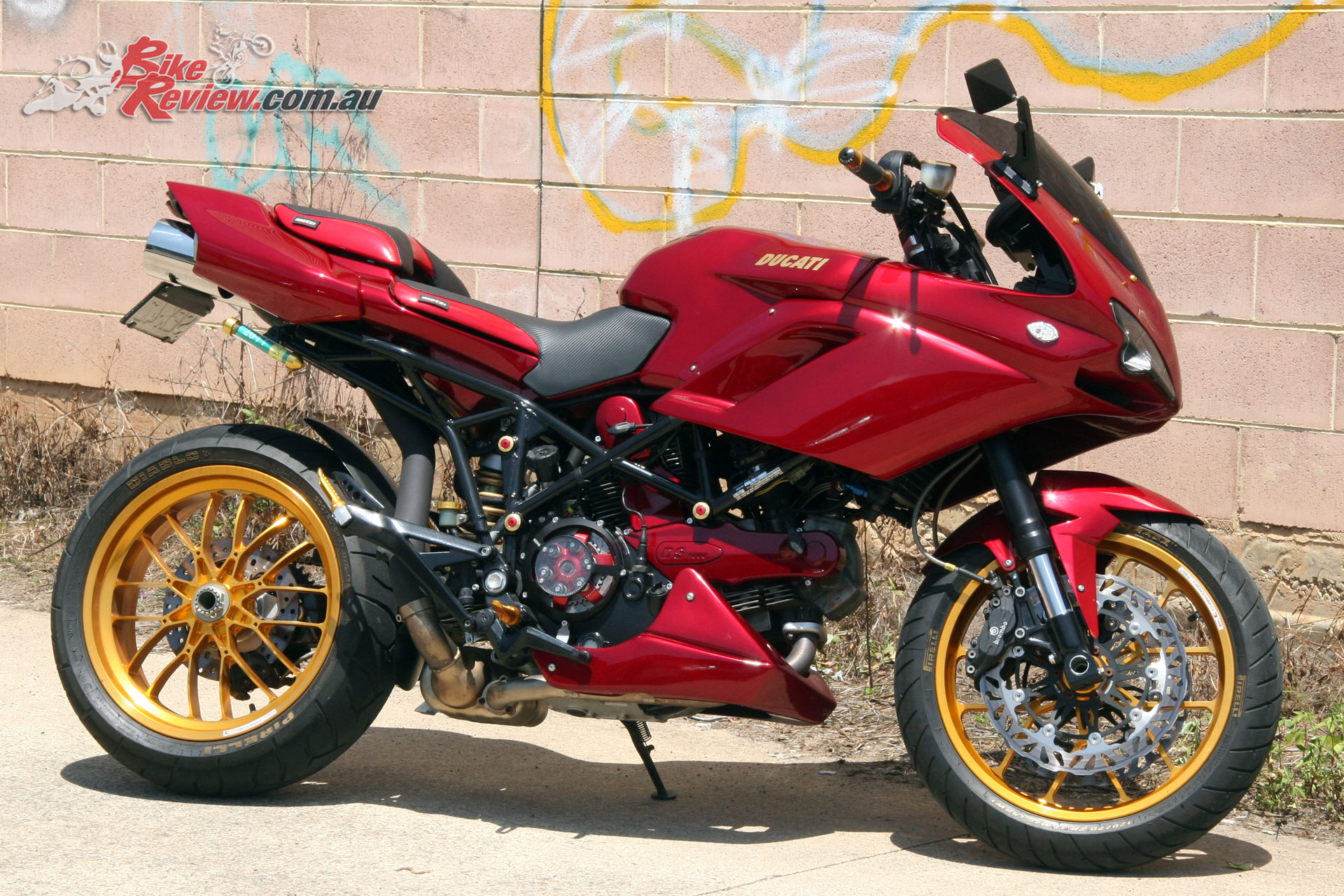 I guess that is a common trait among riders and, after a staple diet over the years of Jap sportsbikes, including nitrous and turbo-boosted jobbies, he set about fulfilling a long time yearning for a big Duke to make his own. Aah, that blessed curse, and to start using a Multistrada is certainly somewhat out of the ordinary.

Of course comparing this Multistrada to the factories’ current offerings you’d be forgiven for thinking Ducati took a leaf out of Jean-Claude’s book when they updated this model, with this custom creation certain having much in common with the more recent offerings. 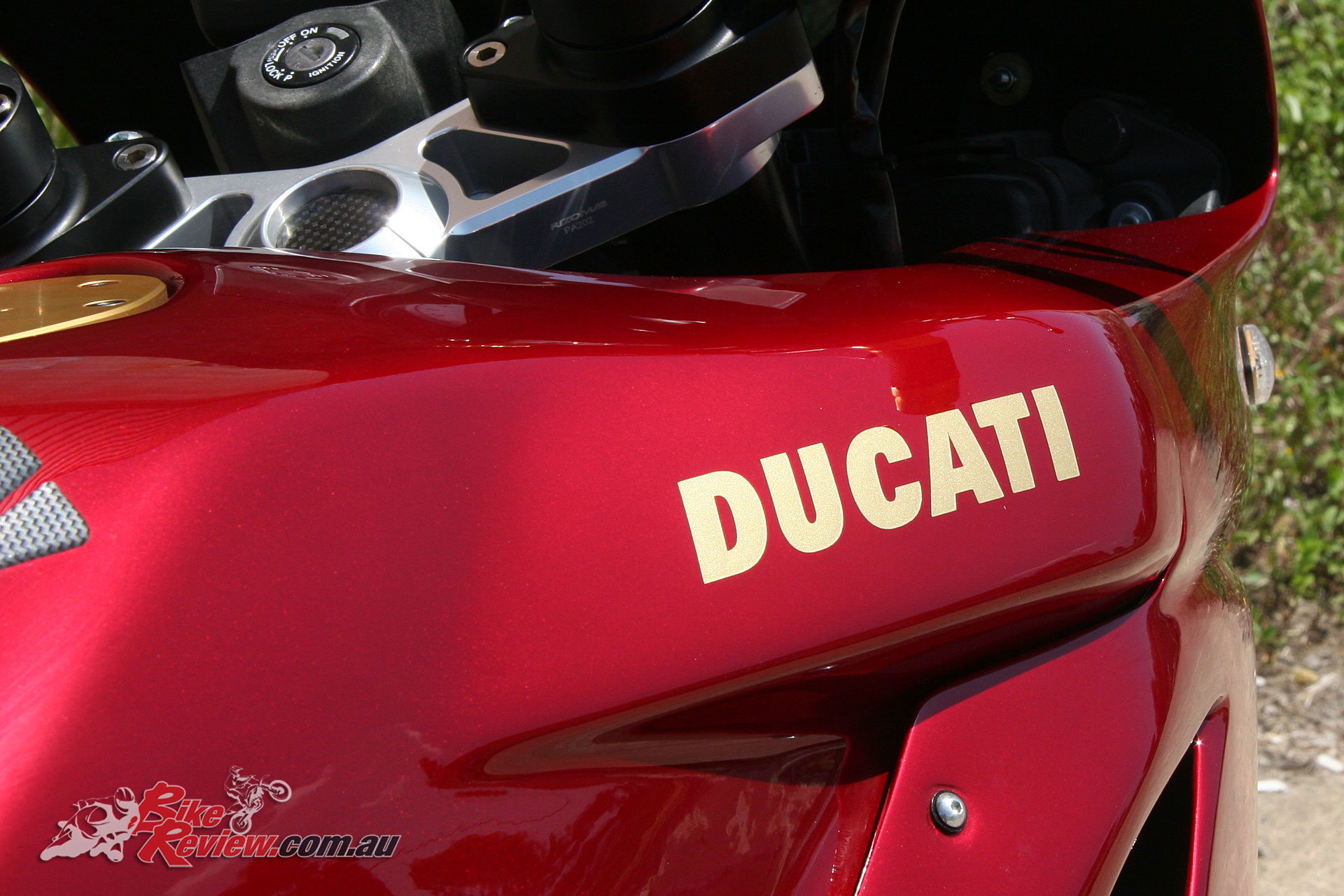 To say the styling of this custom creation was a radical departure from that of the 2004 Multistrada is an understatement, just do a quick Google search of that model…

This 2004 Multistrada came into Jean-Claude’s possession as a wreck after its first owner had an altercation with a bus, of all things. Lucky to be anything more than recycling bin content, the bike was rescued from an auction and lay dormant for a while before being carted over to Extreme Creations for a chat with Ben Shaw about how to go about enacting some of JC’s ideas for it.

Knowing Ben through the custom bike show circuit and by stroke of luck living perilously close by, the foundations for the project were forged. 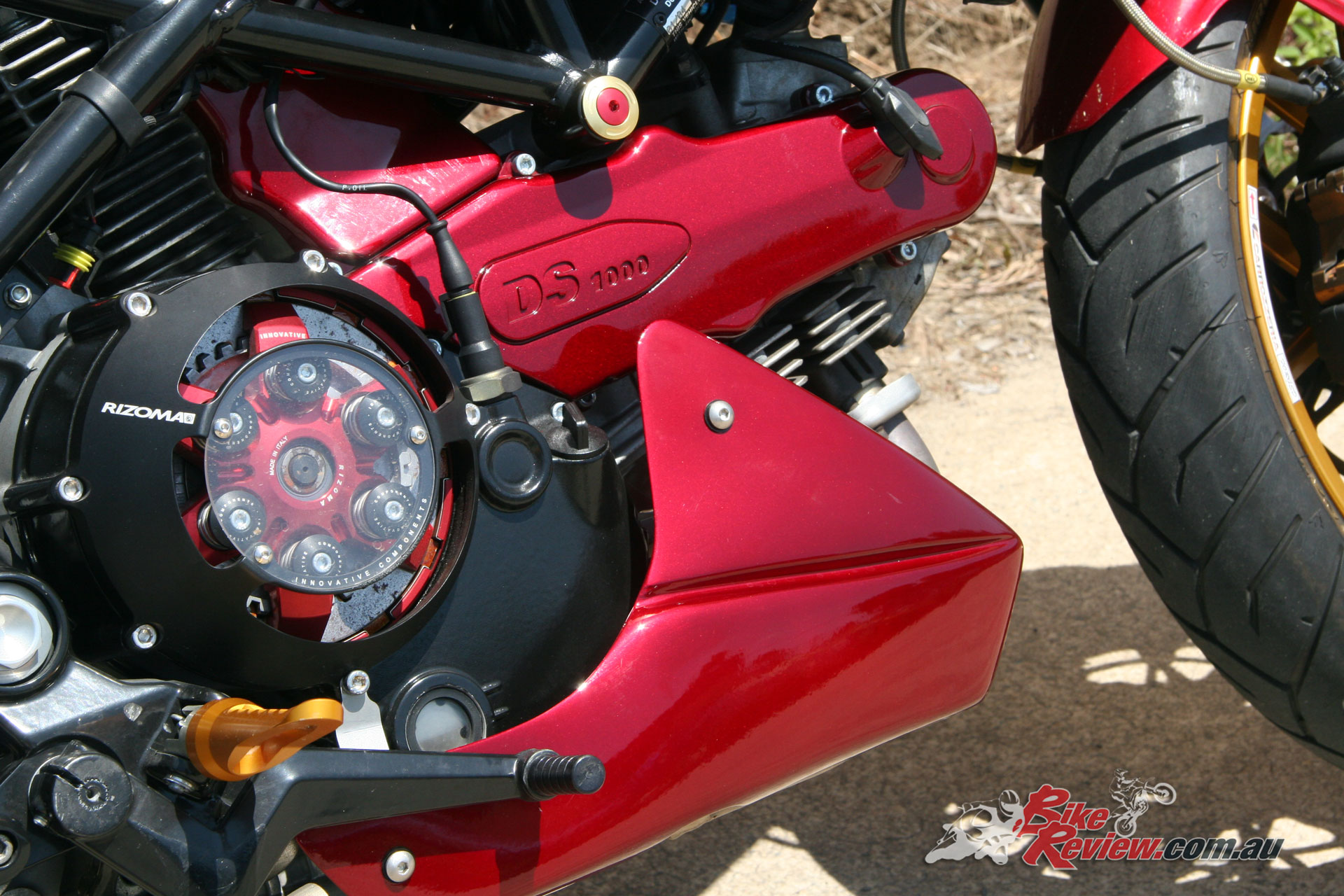 Being more of a sportsbike aficionado, one thing that simply had to be done was to revise the front end for a more sporting bias. In cometh a meaty set of 1098 front girders and a fairing that also happened to be in Jean-Claude’s possession. Not that it all plugs straight in. 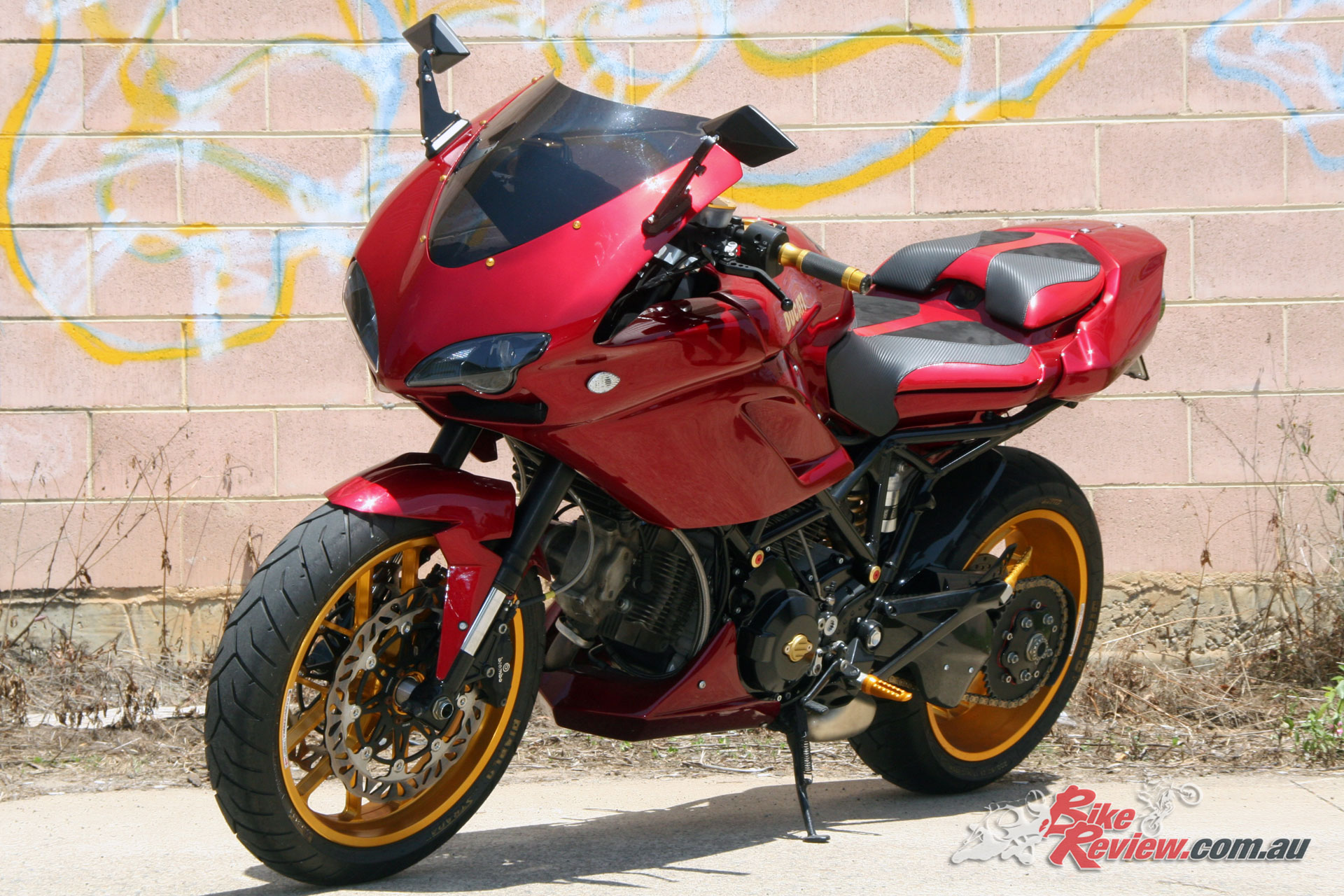 Getting the sporty fairing integrated was quite the challenge, both visually and as far as fixtures

Beneath is the extra jiggery-pokery that you never think of at the beginning, with relocation of the battery and oil cooler necessary as well as the creation of umpteen custom parts – not all the hard graft is visible. Ben sorted the steering head adaptation for the front suspenders and Rizoma clamps were used that favoured above-clamp clip-ons instead of boring ’bars. The end result is miles more aggressive and appealing than the old oddball fairing. As purely a modification, it virtually guarantees exclusivity. 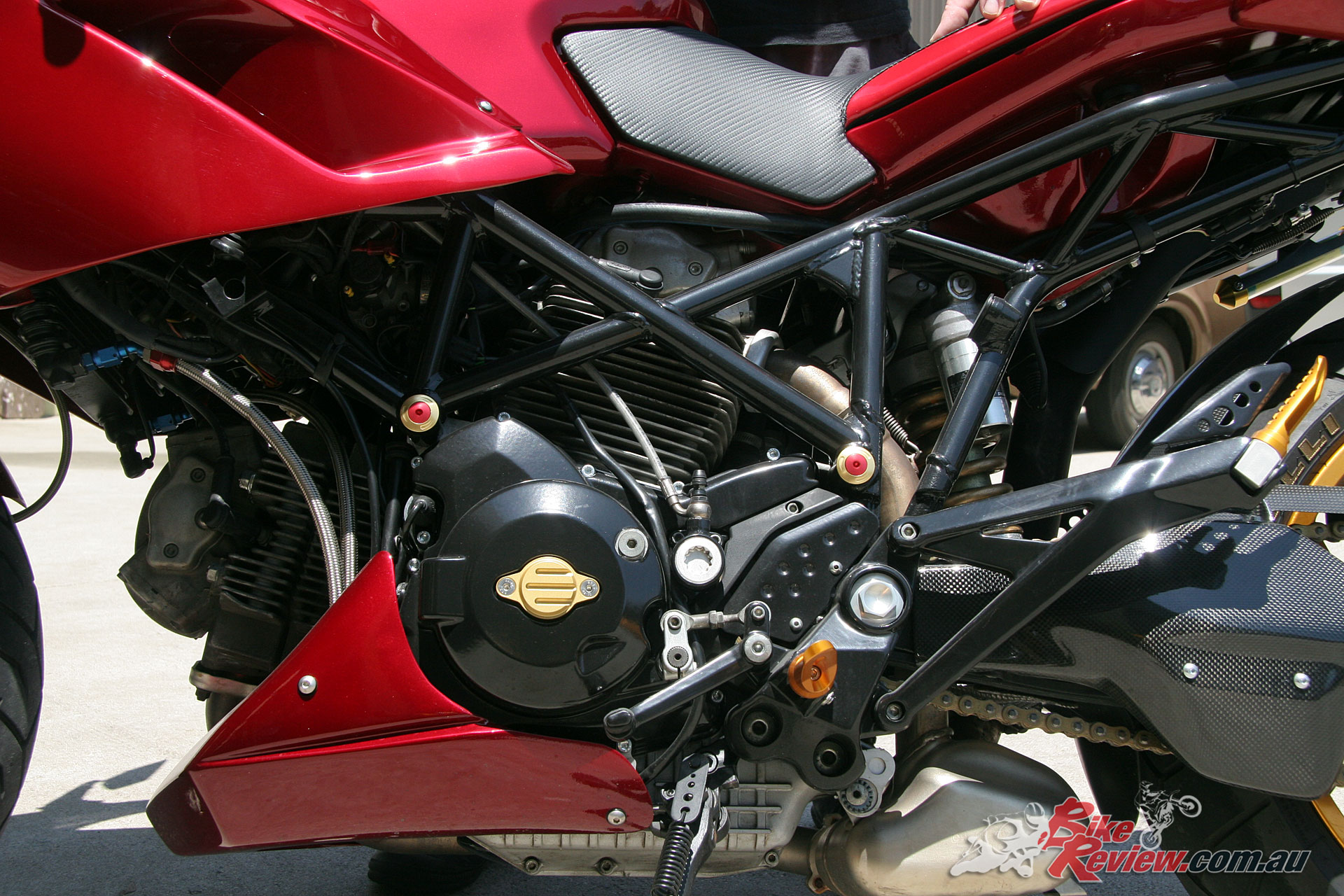 Engine-wise, the internals are standard two-valve 1000cc Desmo twin. Breathing, however, has been accentuated through a Power Commander set-up for tuning purposes and a large-bore exhaust system to help rouse insane, GPS-fixated car-driving sheeple of approach. 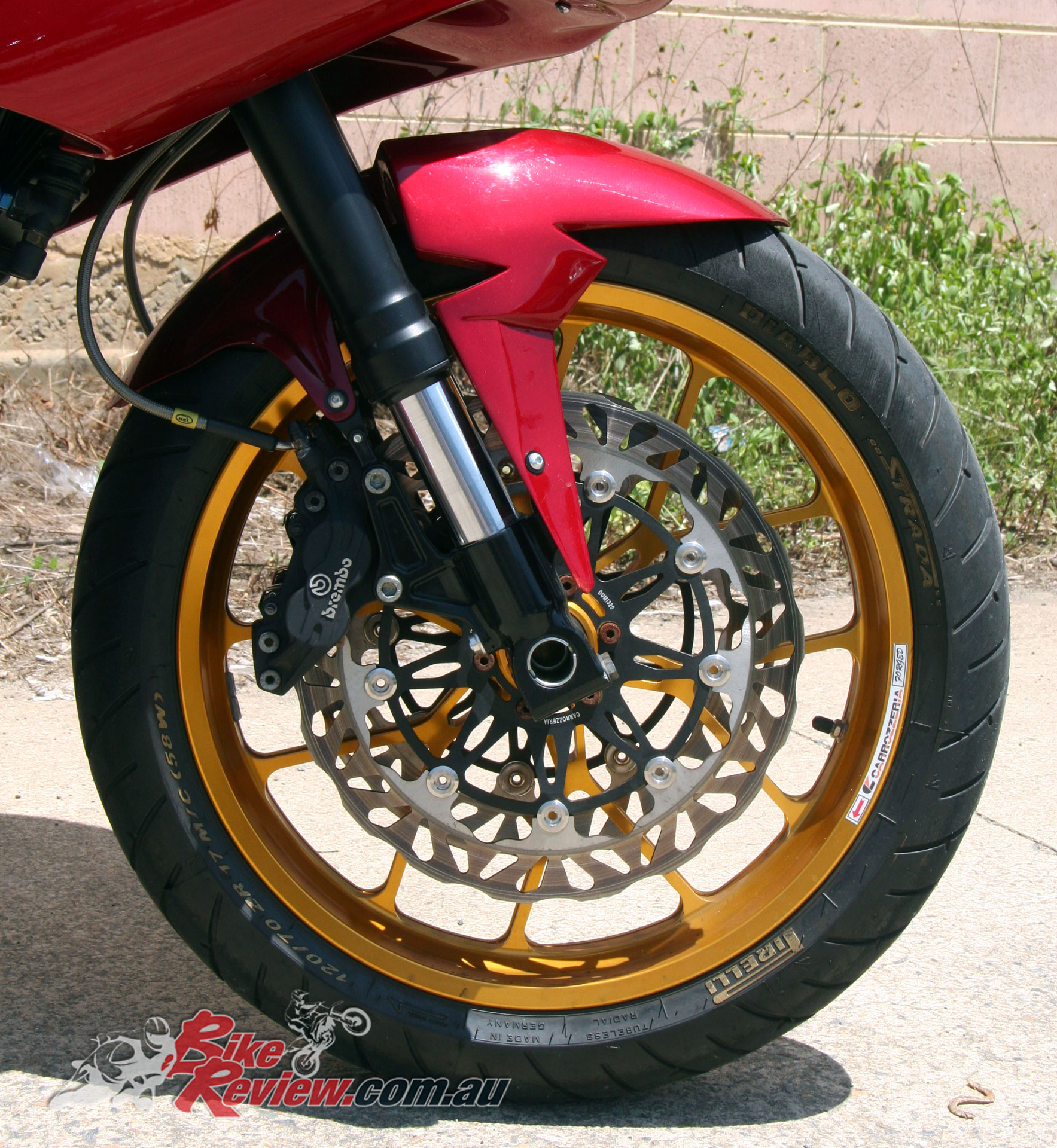 Carrozzeria (US) forged aluminium wheels and front brakes were another addition

The large capacity two-valve twins have excellent stomp characteristics but may not light up everyone’s wick, particularly after cutting teeth on screamers, which generally idle where these twins tail off. As a result, and almost naturally, forced induction was part of the initial plan for the Multi to ensure that it could more rapidly reel in the horizon, sadly though, time and budget couldn’t quite accommodate it. Despite this, JC is pleased with the meaty and willing performance and (probably due to the smooth yet thumping 90 degree twin pulses), wifey simply adores it… 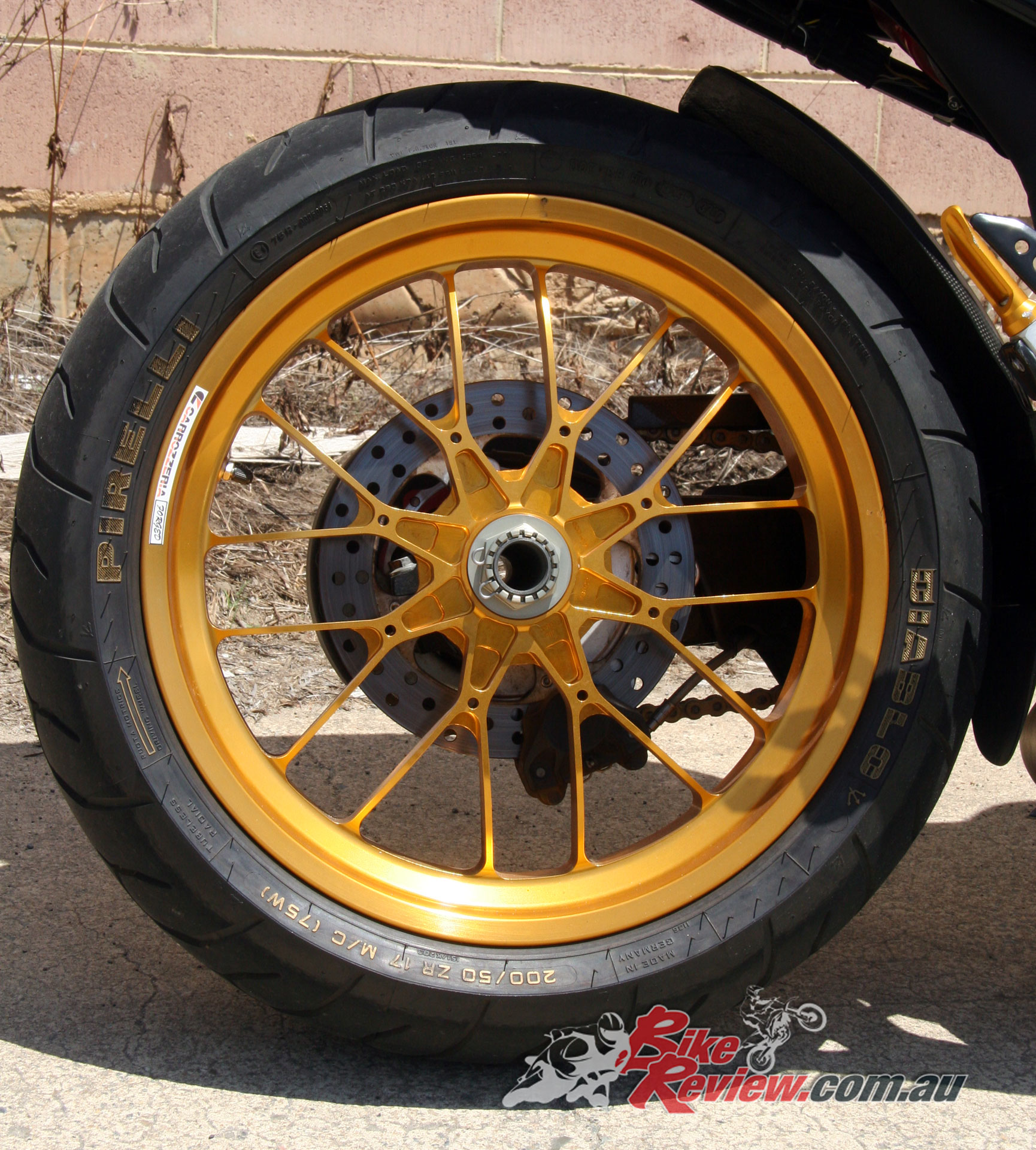 Flicking through the parts catalogues and brochures at Extreme Creations necessitated the purchase and fitment of some very tasty Carrozzeria (US) forged aluminium wheels and front brakes. Not only do these look pretty darn sweet but lighten up the unsprung mass a little for better suspension control and faster handling and, of course, a tad less weight to propel.

To further improve the handling and compensate for the different components, JC lowered the rear end and altered the springing to match the more sports-biased front. It’s definitely not all about looks. Still, looks are important and the nicely fashioned tail with discreet lighting and very nice Metzi seating adds that touch of class and rounding to the whole package. 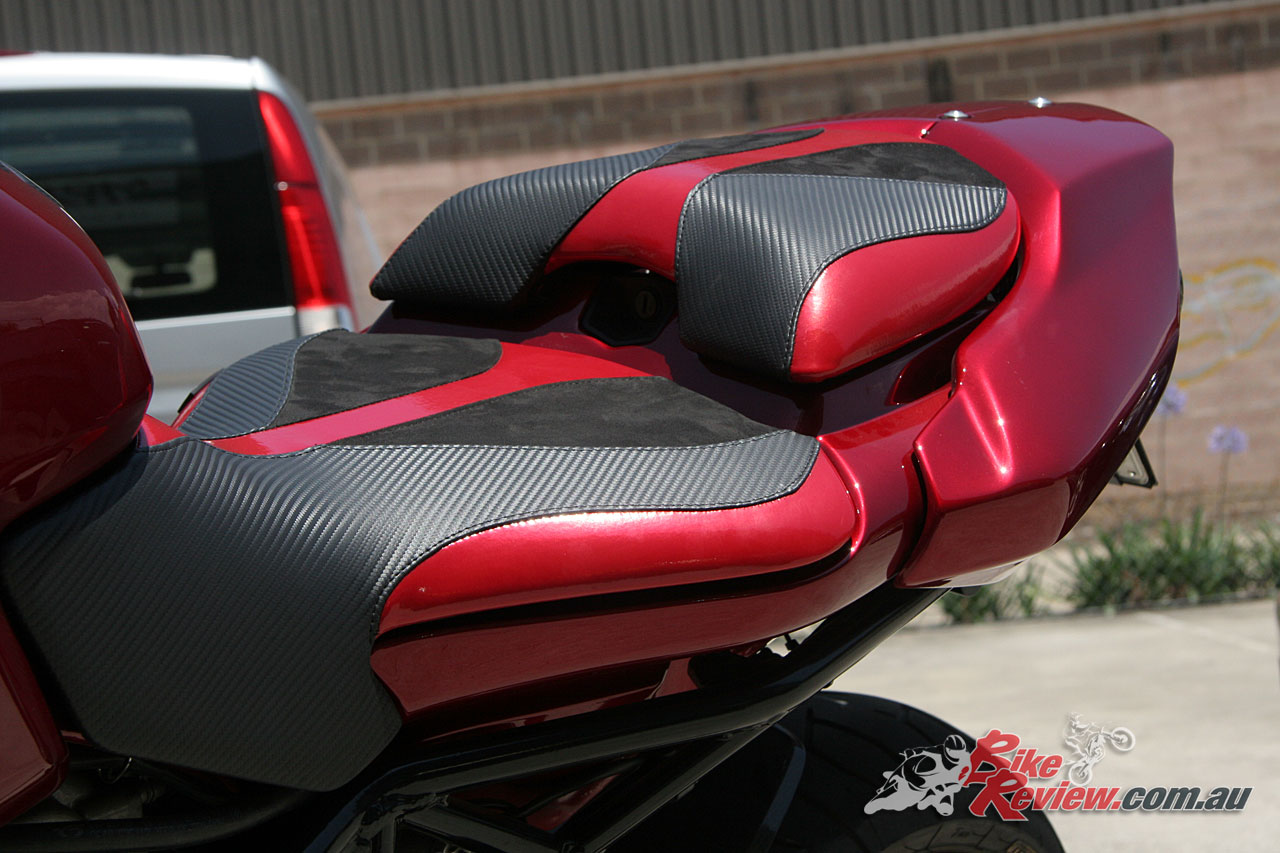 The numerous anodised gold finished parts add the necessary glint and glamour. Couple these with the pearl brandy wine paint and black frame and it is very pleasing to the eye and just how JC wants it. “No more chrome and polishing… I’m over that,” he reckons – perhaps a bit like Canadian Club over VB, as the advertising suggests. Good lad.

I don’t know about you, but the more I look at this bike and understand the pains that have been endured to get it to this state, the more impressed I am. It cannot be easy remodelling an entire motorcycle from would-be tourer and, dare I say, bit of an ogre to a unique and lusty road burner but I think Jean-Claude and Ben have done a fantastic job on it to date. To date? Yes, JC could end up fitting that snail after all and then goodness knows what additional delights may follow. 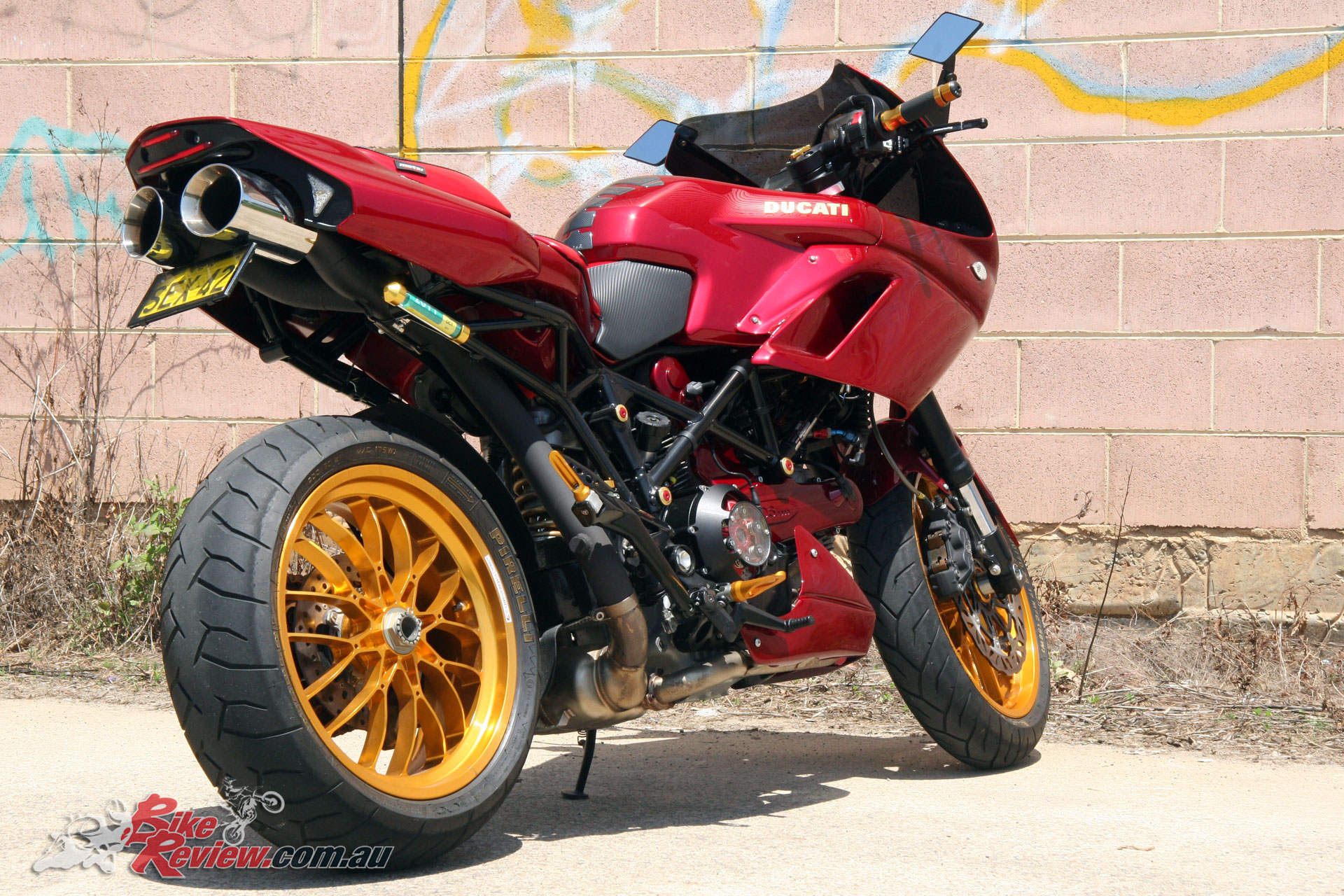 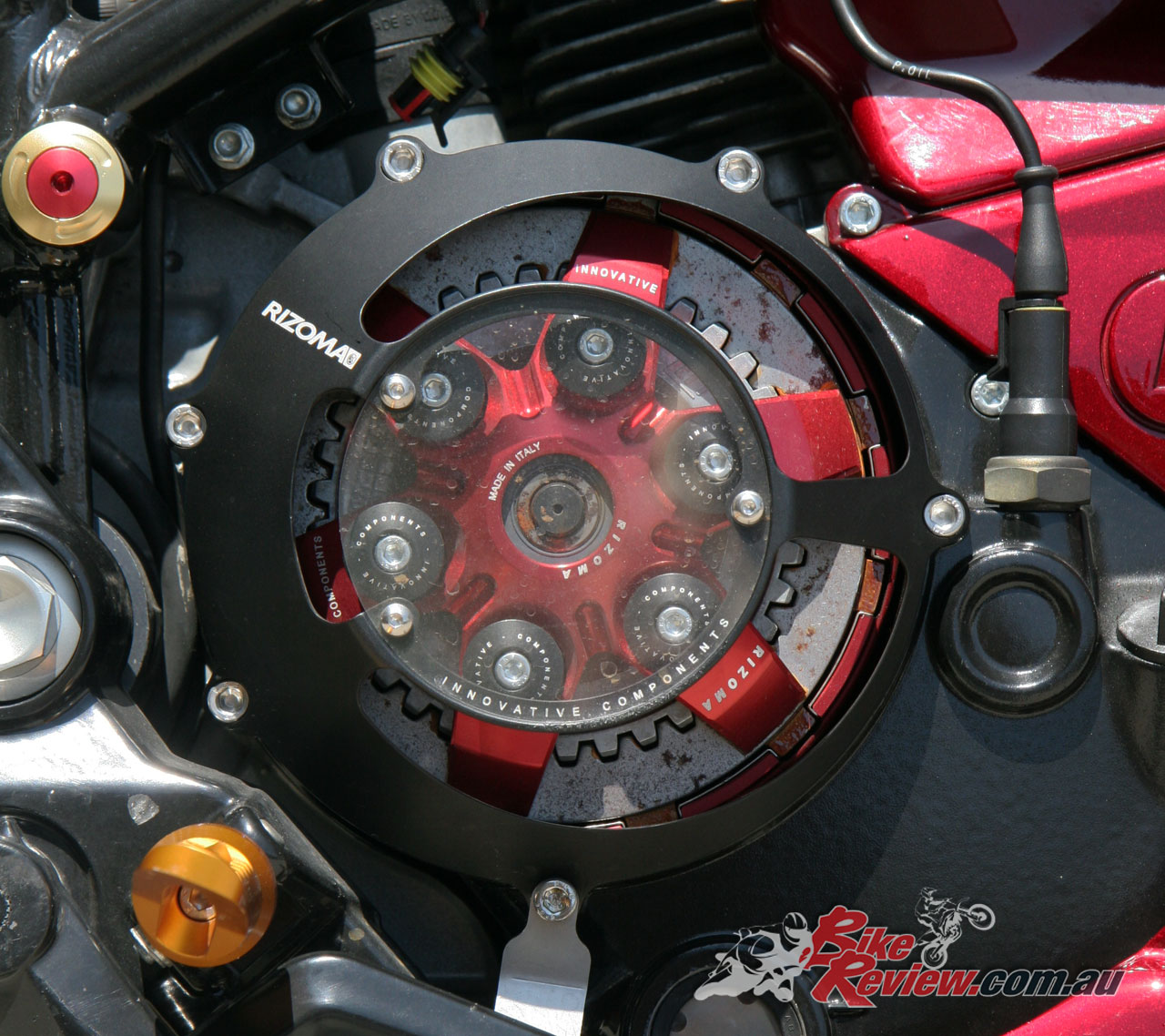 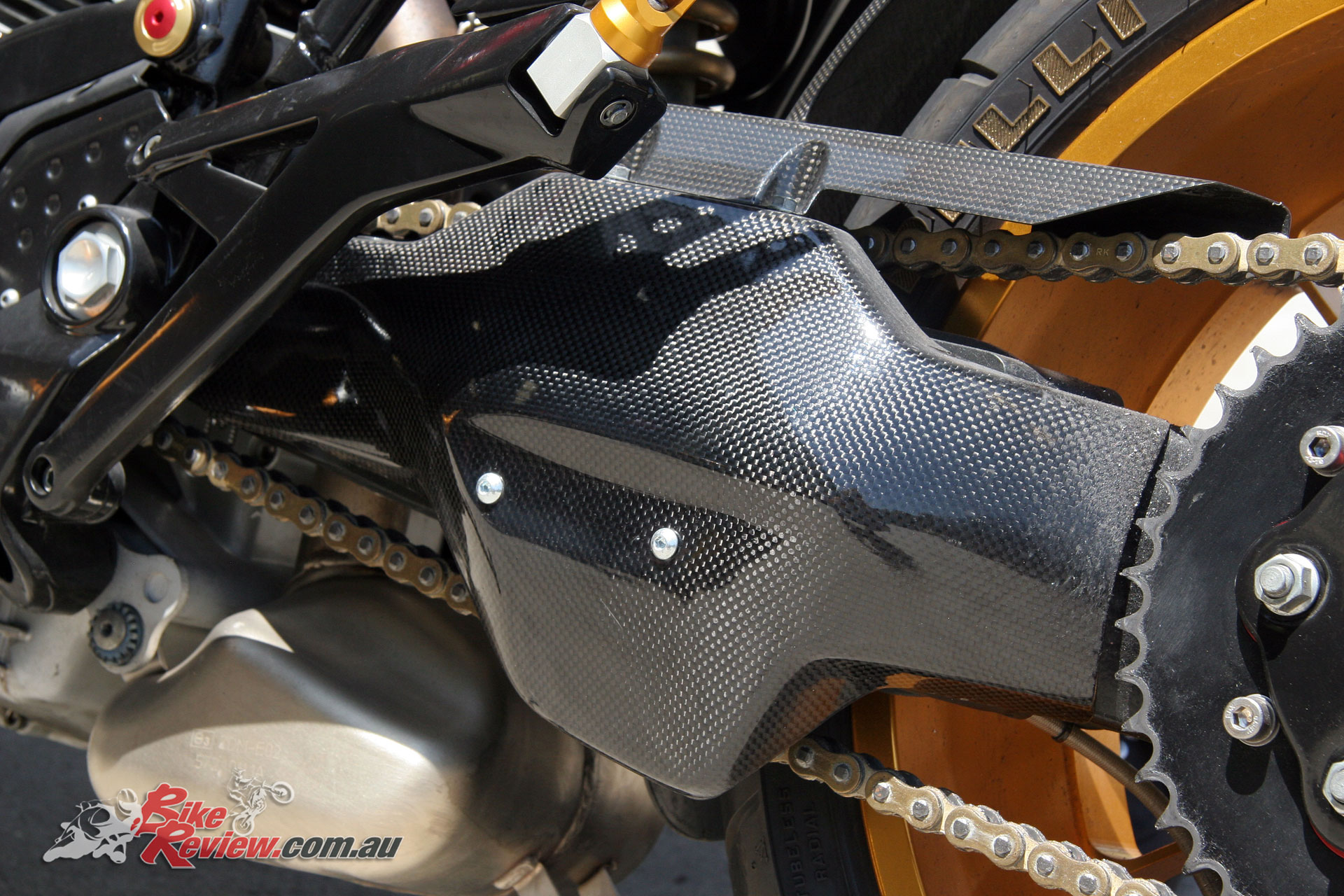 To regular readers, Ben Shaw’s Extreme Creations has to be familiar. Many excellent machines featured have passed through the highly talented hands of Ben, which is enviable testament to his metallurgical skills, vivid vision, attention to detail and quality of workmanship. Ben is a motorcycle fanatic who can make just about anything your heart desires (one-offs to production runs) – painstakingly by hand or CAD/CAM multi-axis machines. 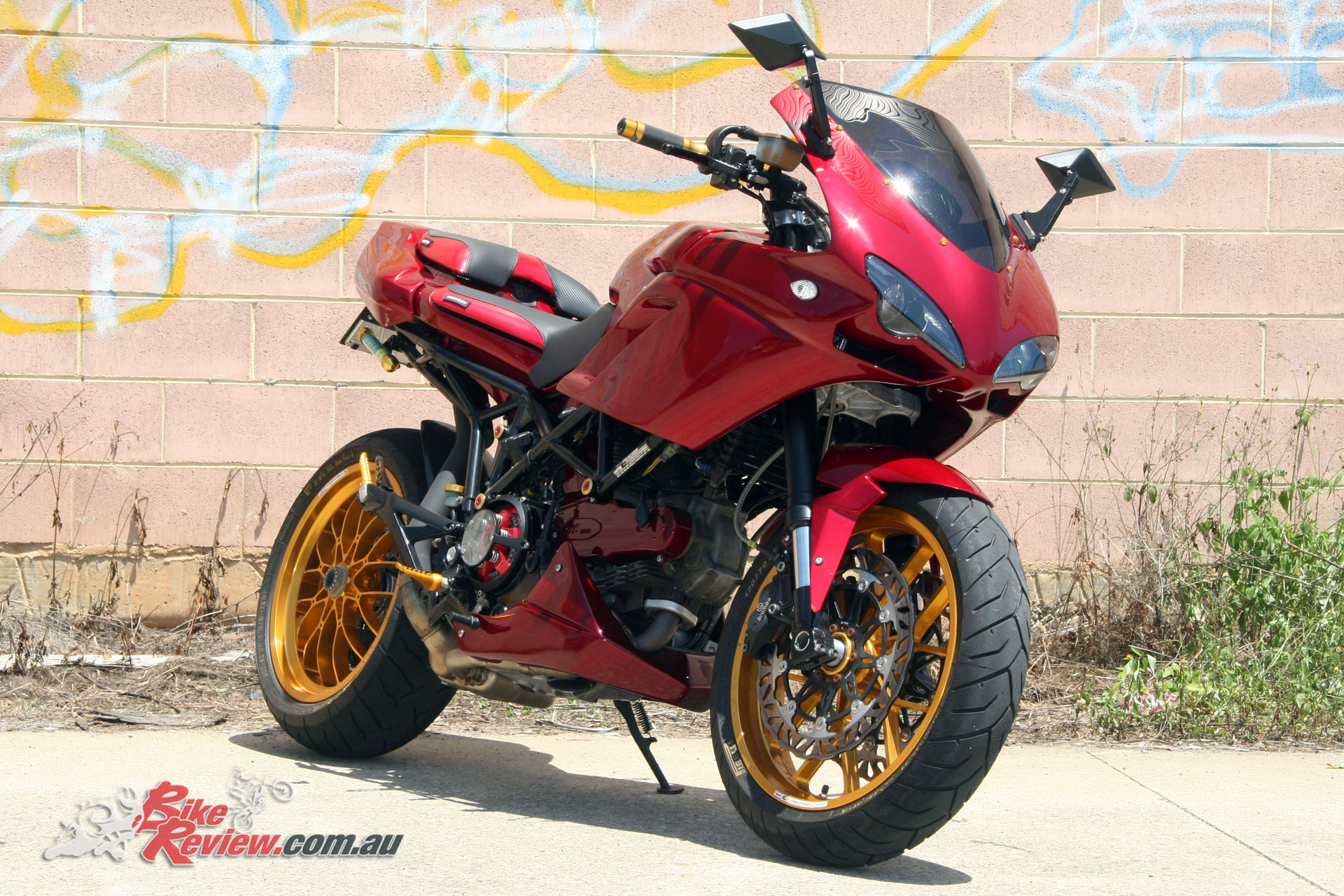 Jean-Claude’s Multistrada is an example of Ben’s skills. Where? All over the place, from re-wiring, custom brackets to paint and parts adaptation and assembly, however, because they are well executed, there is a tendency for them to combine seamlessly into more artwork than mechanical components.

Skills like Ben’s are not born into; they are learnt and honed through practice, patience and understanding. This began almost 20 years ago through the trade of pattern making, which is fundamentally creating tools (moulds, dies, tooling and jigs etc) to form parts to exacting specifications. Now after 12 years, Extreme Creations offers much more than just mechanical engineering, and for a jolly good reason – workmanship, diversity and a desire to exceed customer expectation are top priorities. Check out the EC website (extremecreations.com.au) for more information. 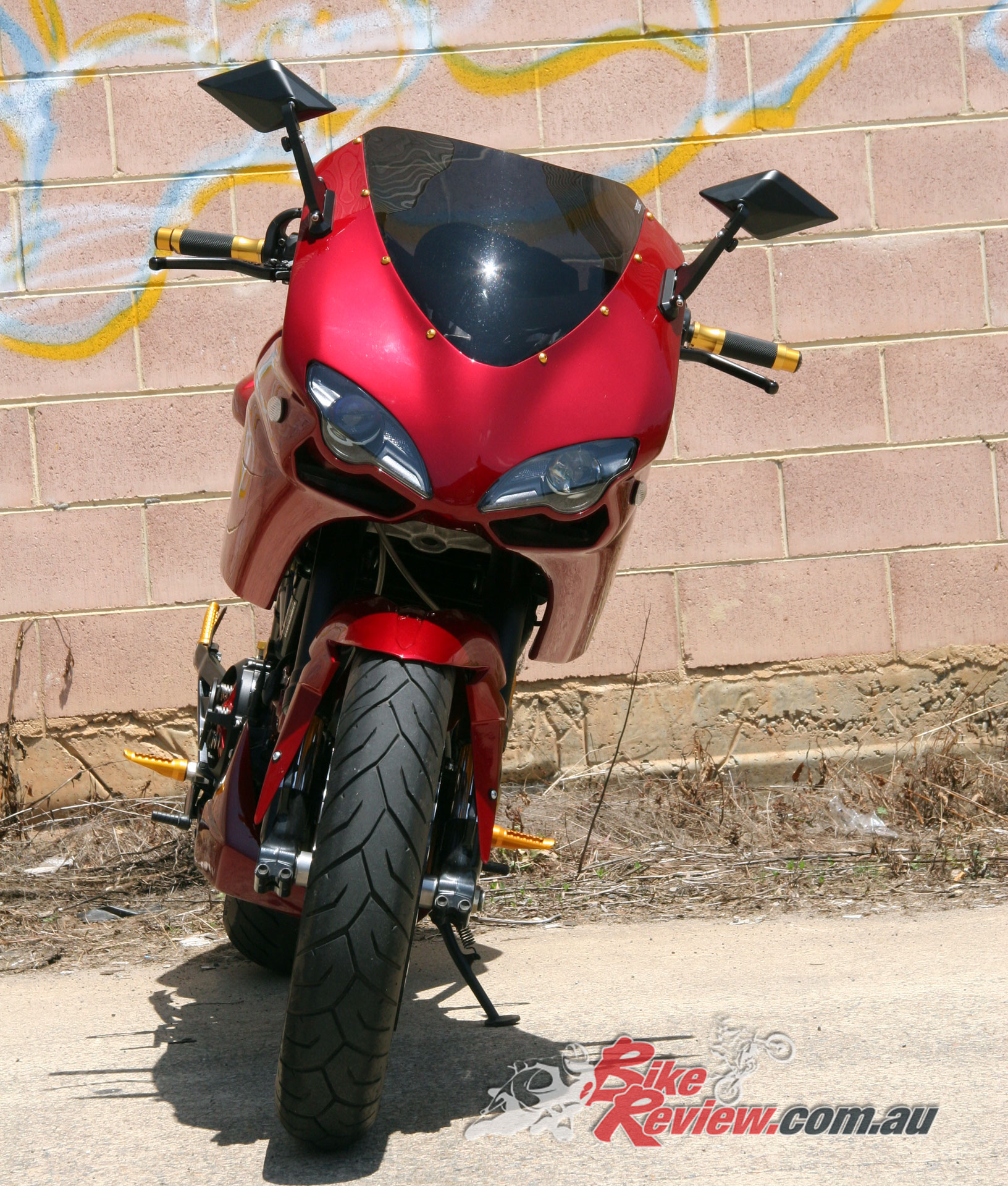 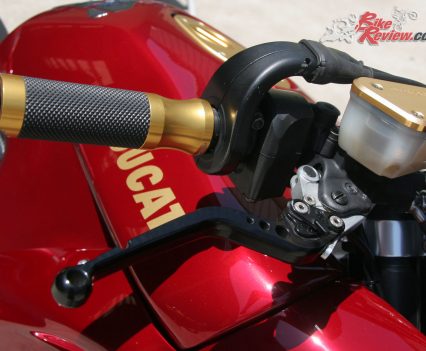 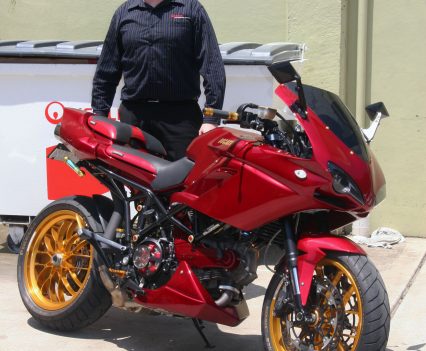 Jean-Claude with his Multistrada 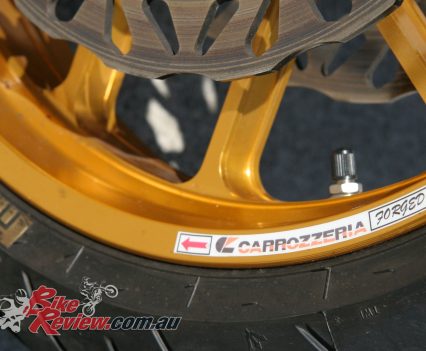 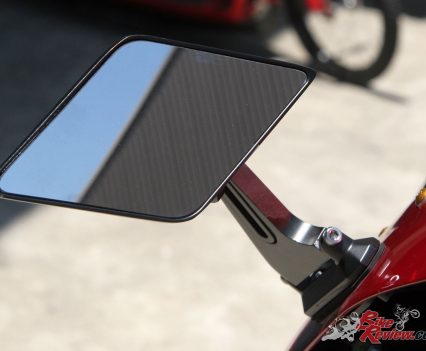 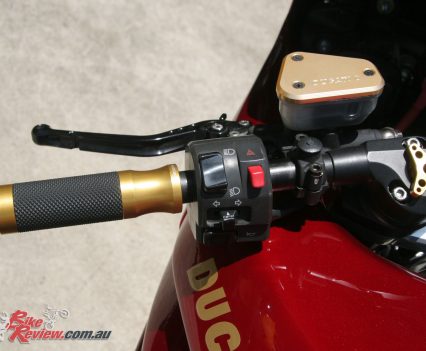 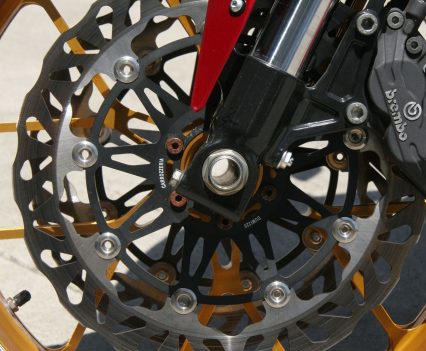 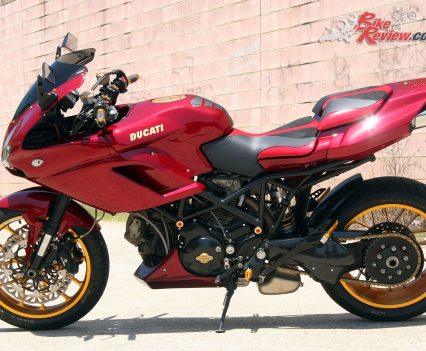 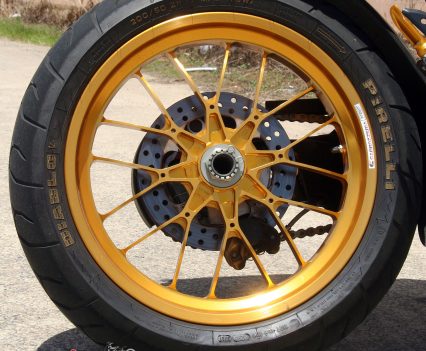 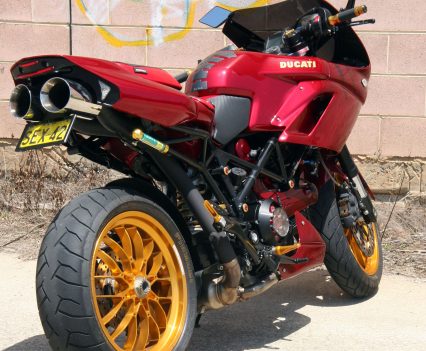 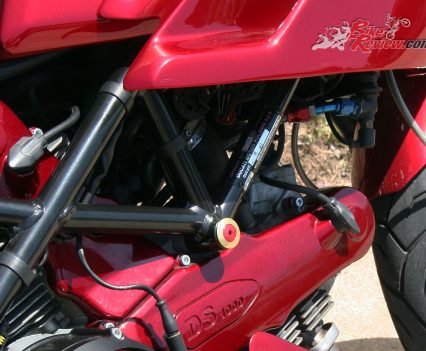 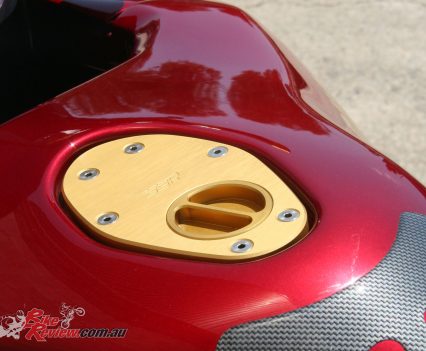 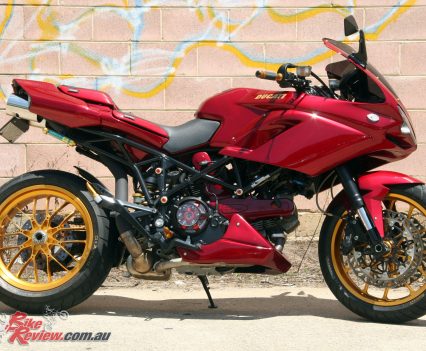 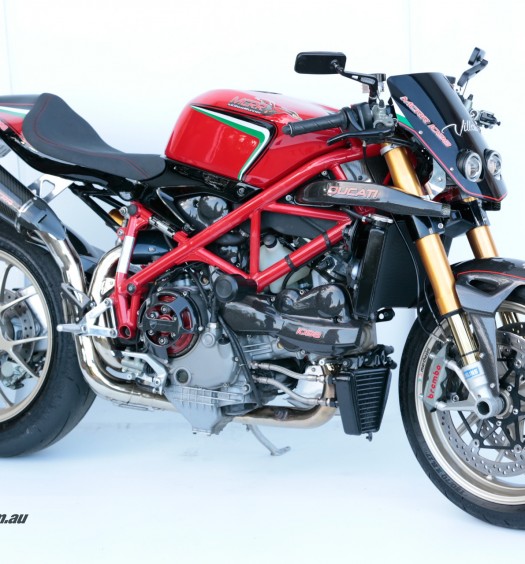 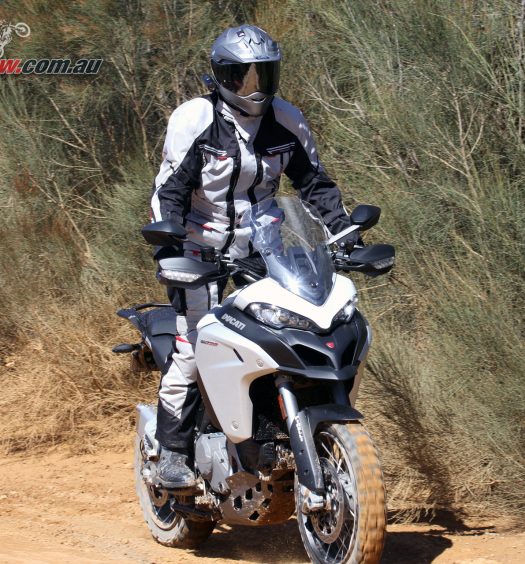