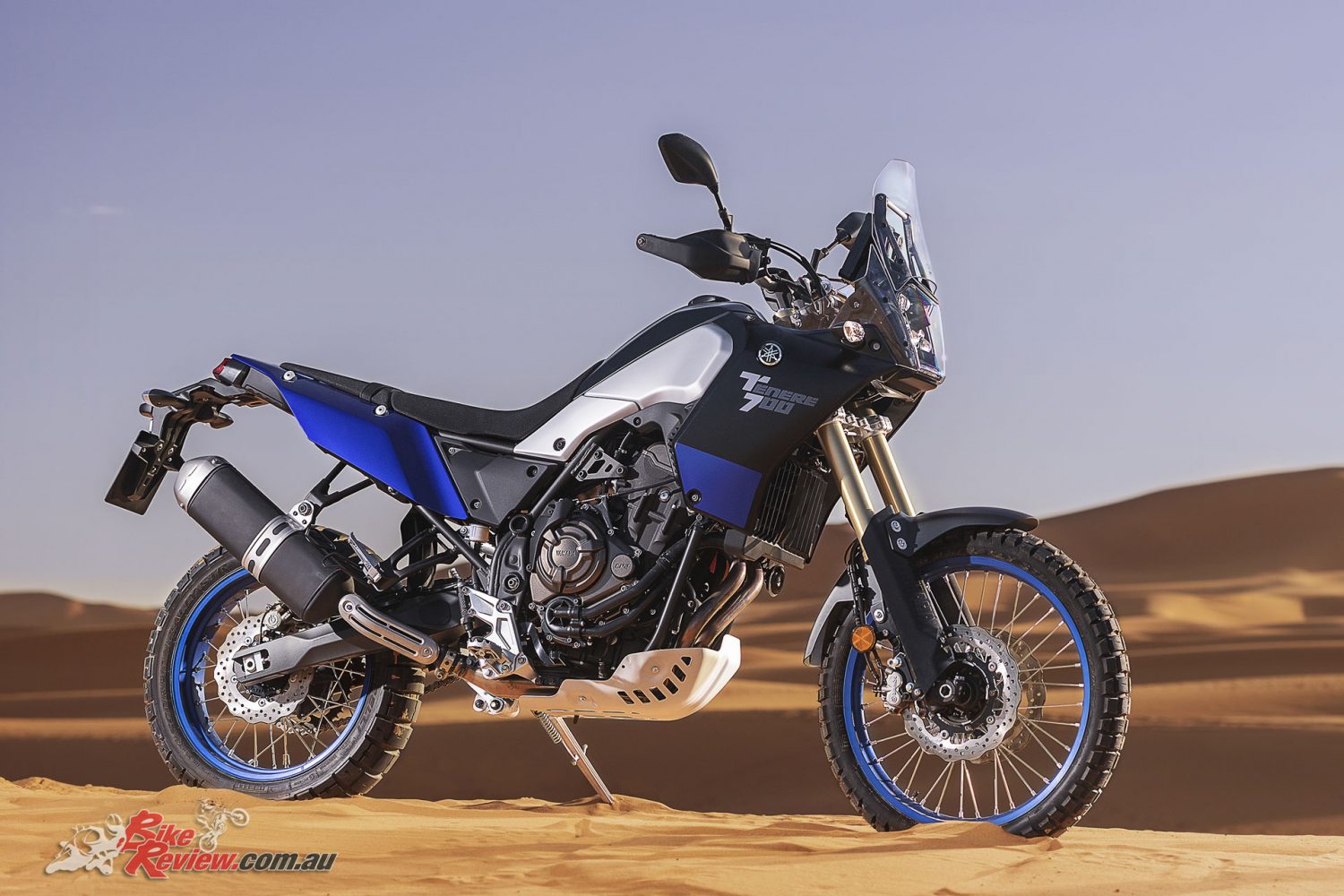 The Tenere 700 has been unveiled and is sure to be a fantastic bike. Check out all of the details from EICMA...

The Yamaha Tenere can trace its roots back to the launch of XT500 enduro-adventure bike in 1976 and with a strong torque and compact chassis, this versatile single cylinder four-stroke became an instant success, now for 2019 Yamaha will launch the Tenere 700 as it’s latest iteration.

The history of Yamaha’s Tenere

In many countries throughout Europe the original XT500 was Yamaha’s best-selling model during the late 1970s – with over 60,000 sold in France alone during its 14 year production run. 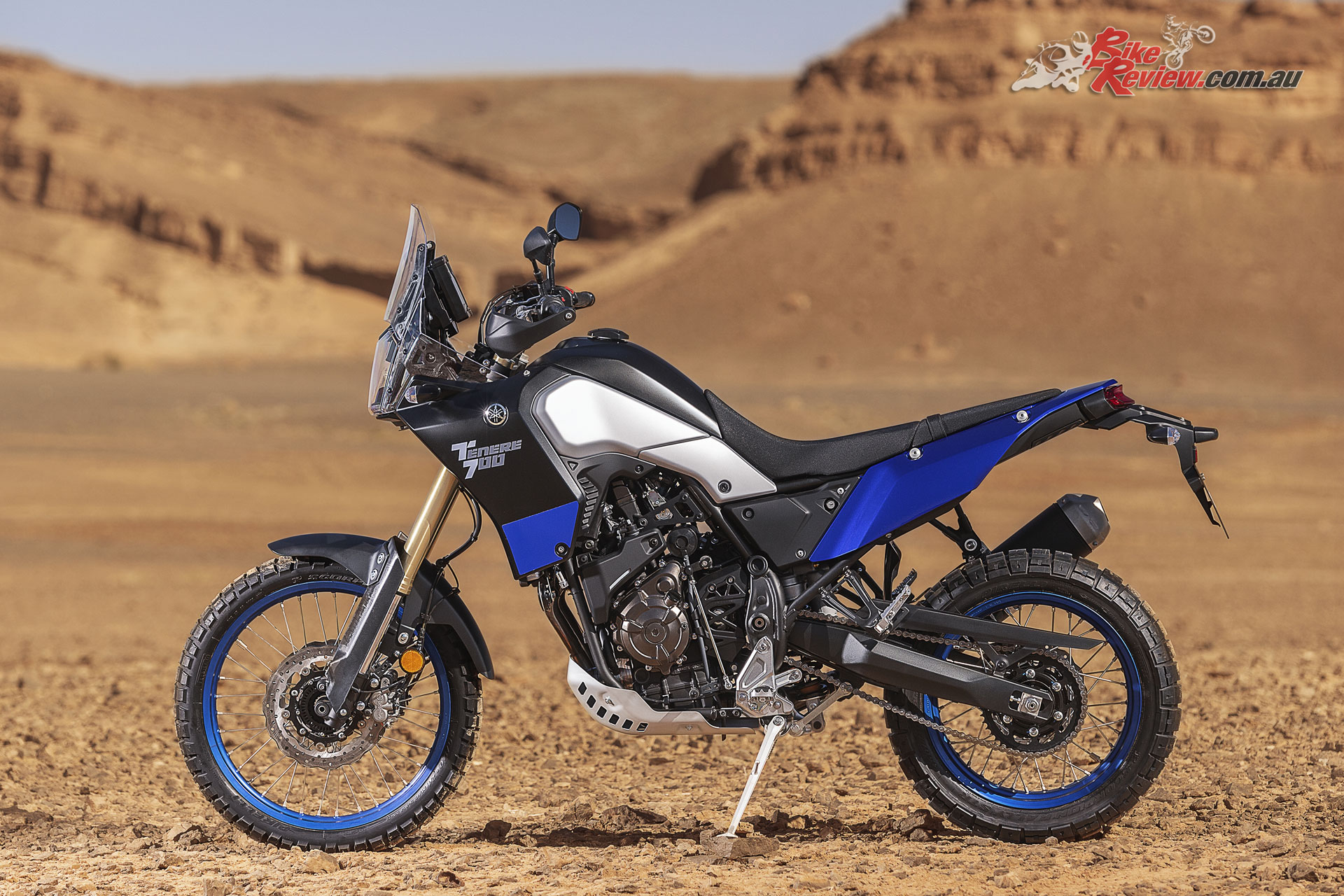 Its go-anywhere ability, rugged design and outstanding reliability opened up a new world of adventure to many motorcycle riders – and these same qualities made it the ideal choice for competitors in the first Paris-Dakar Rally that was won by Frenchman Cyril Neveu on a Yamaha XT500.

Quickly establishing a reputation as a tough desert rally bike, the XT500 became the default for many adventure seeking riders and rally racers alike, with active owners clubs throughout the world.

By the end of the 1970s the XT had achieved legendary status among Europe’s riders, and in 1983 Yamaha introduced the XT600Z that became the company’s first Adventure bike to carry the Ténéré name – a Tuareg word meaning ‘desert’ or ‘wilderness’. 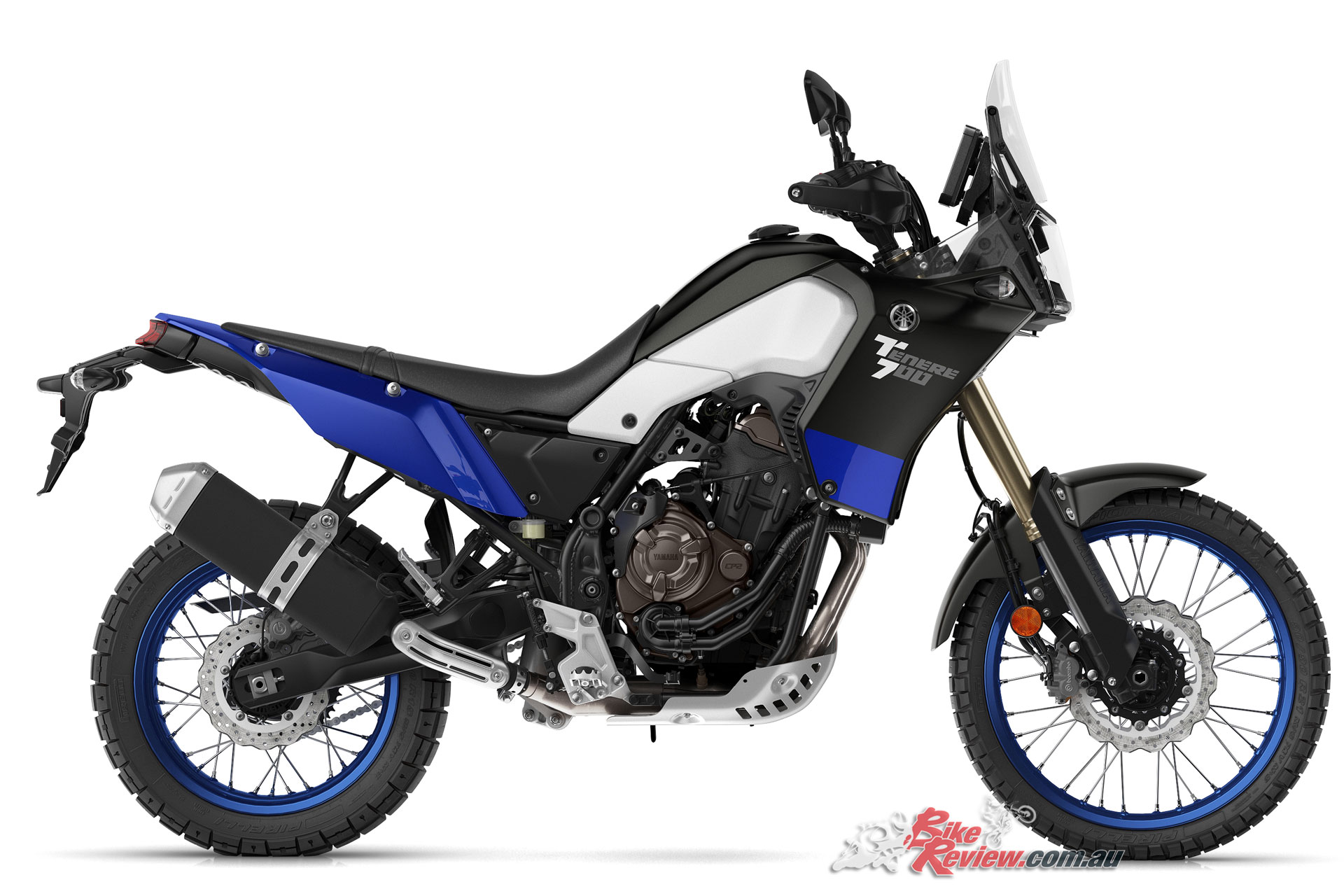 At this time the Ténéré line-up was constantly evolving and growing, and the end of the 1980s saw the introduction of the 2-cylinder XTZ750 Super Ténéré, followed in the early 1990s by the single cylinder XTZ660 Ténéré. During this period the Yamaha Adventure range went on to win many more Dakar Rally events – with Frenchman Stéphane Peterhansel claiming 6 victories on his XTZ750-based factory Yamaha in the 1990s.

The first sign that Yamaha was developing a new Adventure bike came with the launch of the T7 concept in 2016. Displayed at motorcycle shows all over the world, it gave riders a taste of what was to come – and in 2017 Yamaha introduced the Ténéré 700 World Raid prototype that was one step closer to the final production specification. 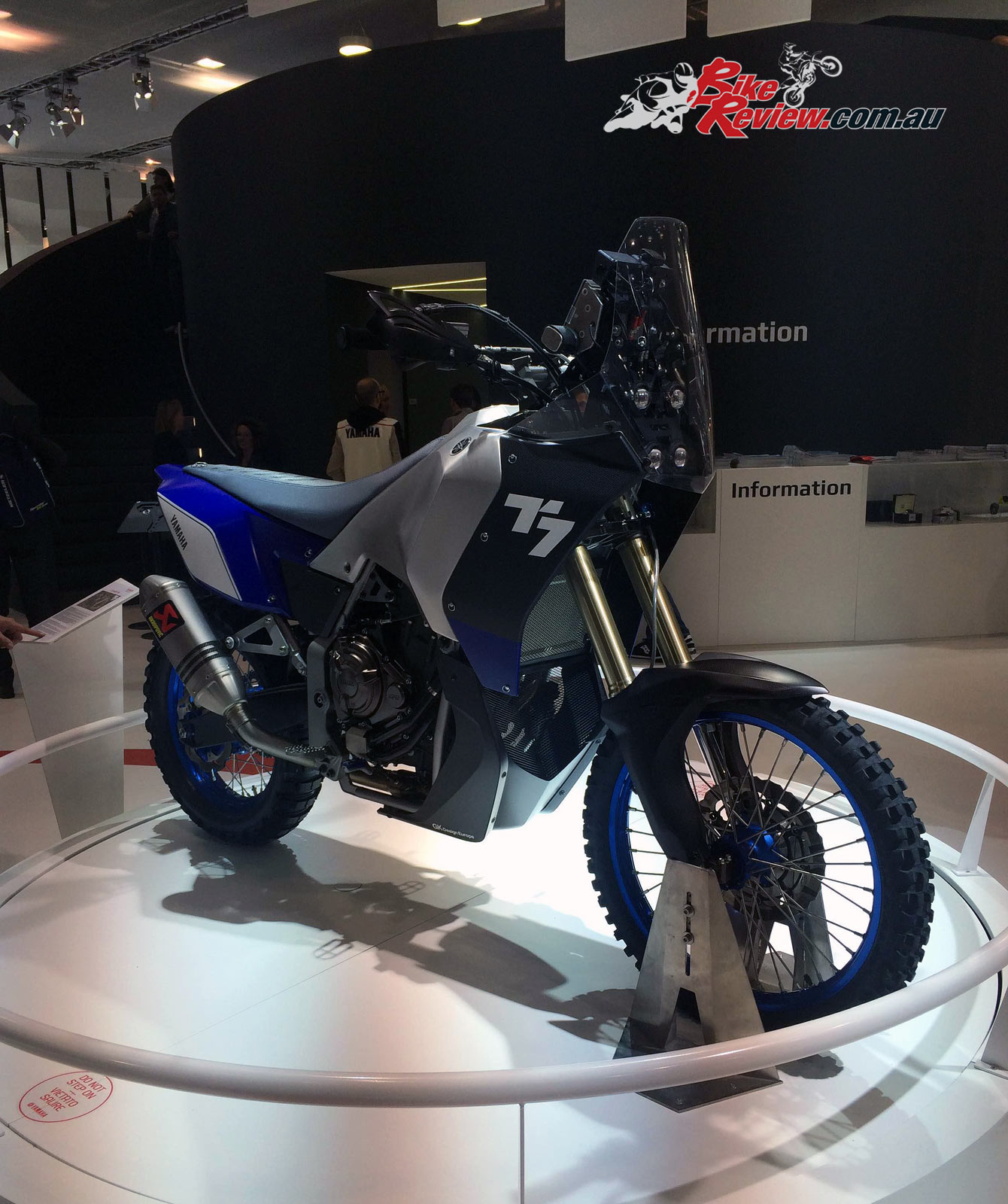 Since 2017 the Ténéré 700 World Raid prototype has undergone an intensive world tour in various key locations all over the globe, and during this development phase the bike has been subjected to the most extreme testing in hostile terrain and severe climatic conditions.

Piloted by a team of professional riders including multi Dakar winner Stéphane Peterhansel and Official Yamalube Yamaha Rally Team riders such as Adrien van Beveren and Rodney Faggoter, the World Raid prototype has been pushed to its limits across the globe, from Australia’s unforgiving outback through to the brutal South American deserts. 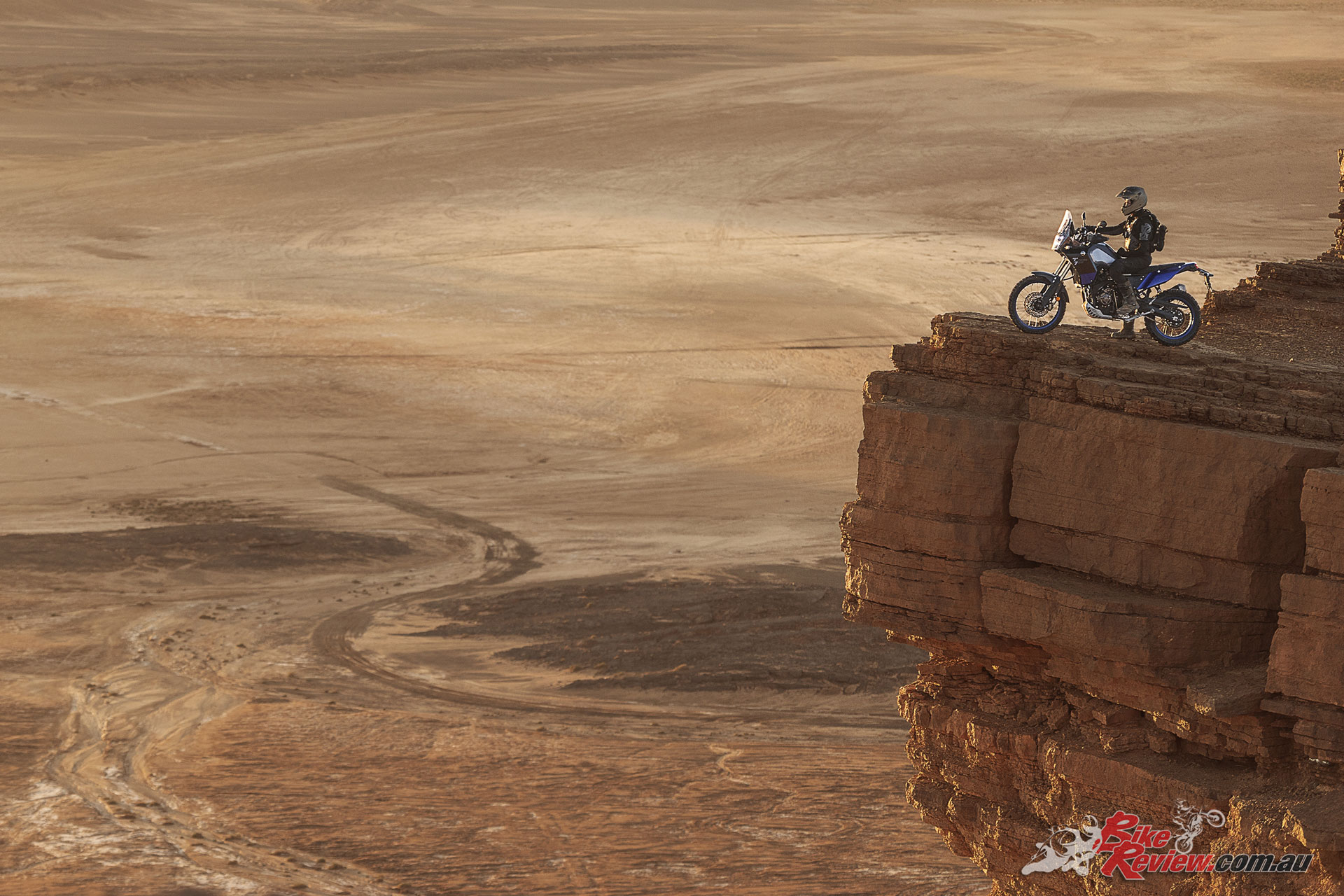 The new Tenere 700 has been tested around the world during development, including in Australia and by Rodney Faggoter

At the same time as putting thousands of hours on the development bikes, the Ténéré 700 World Raid programme has also showcased the design to many hundreds of local riders who have been invited to give Yamaha their valuable input and help shape the final production model.

Equipped with the successful CP2 689cc parallel-twin engine and a completely new chassis, the Ténéré 700 is designed to deliver highly competitive handling and agility in the dirt – combined with high speed long distance performance on the road – making it an extremely capable and versatile Adventure bike. 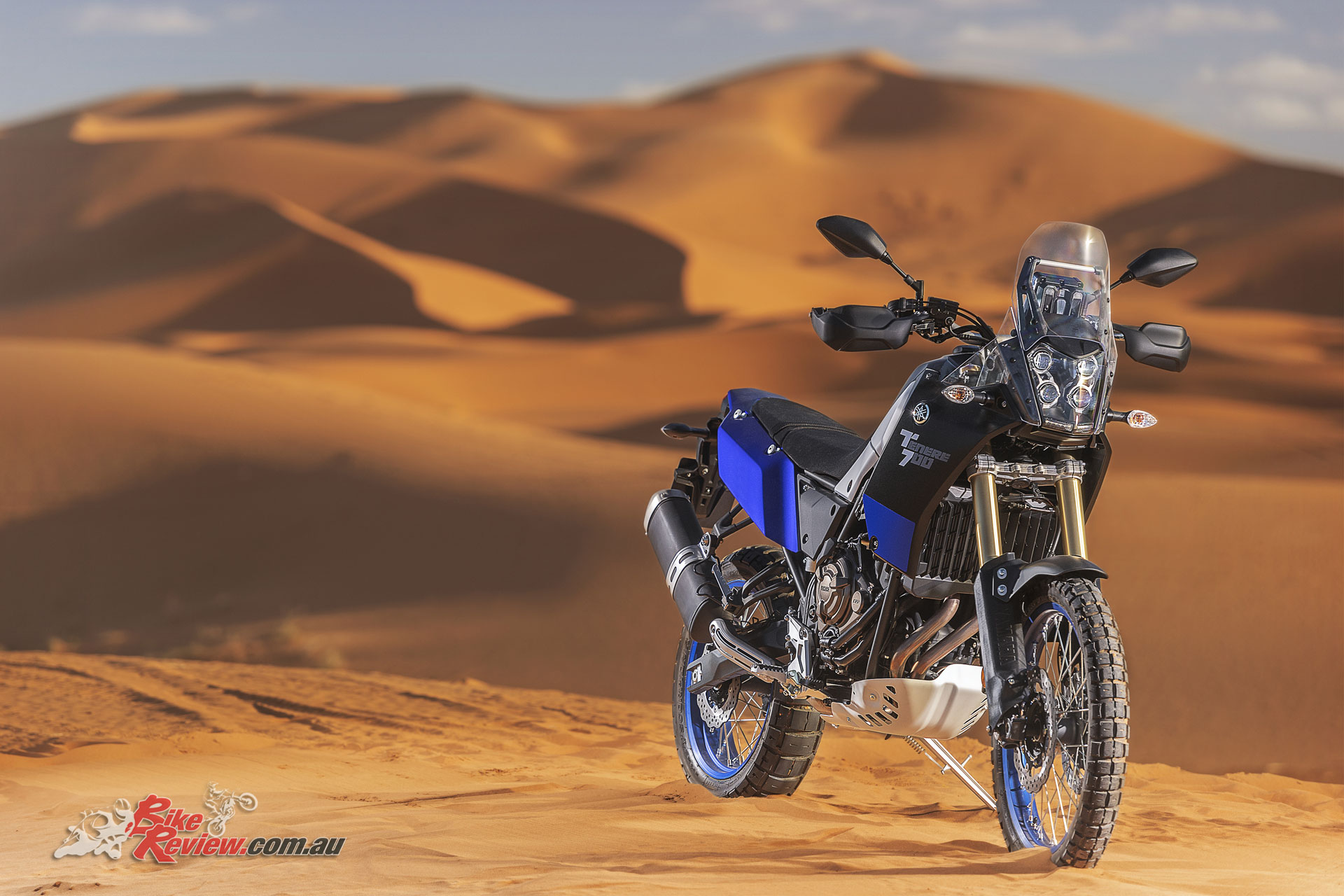 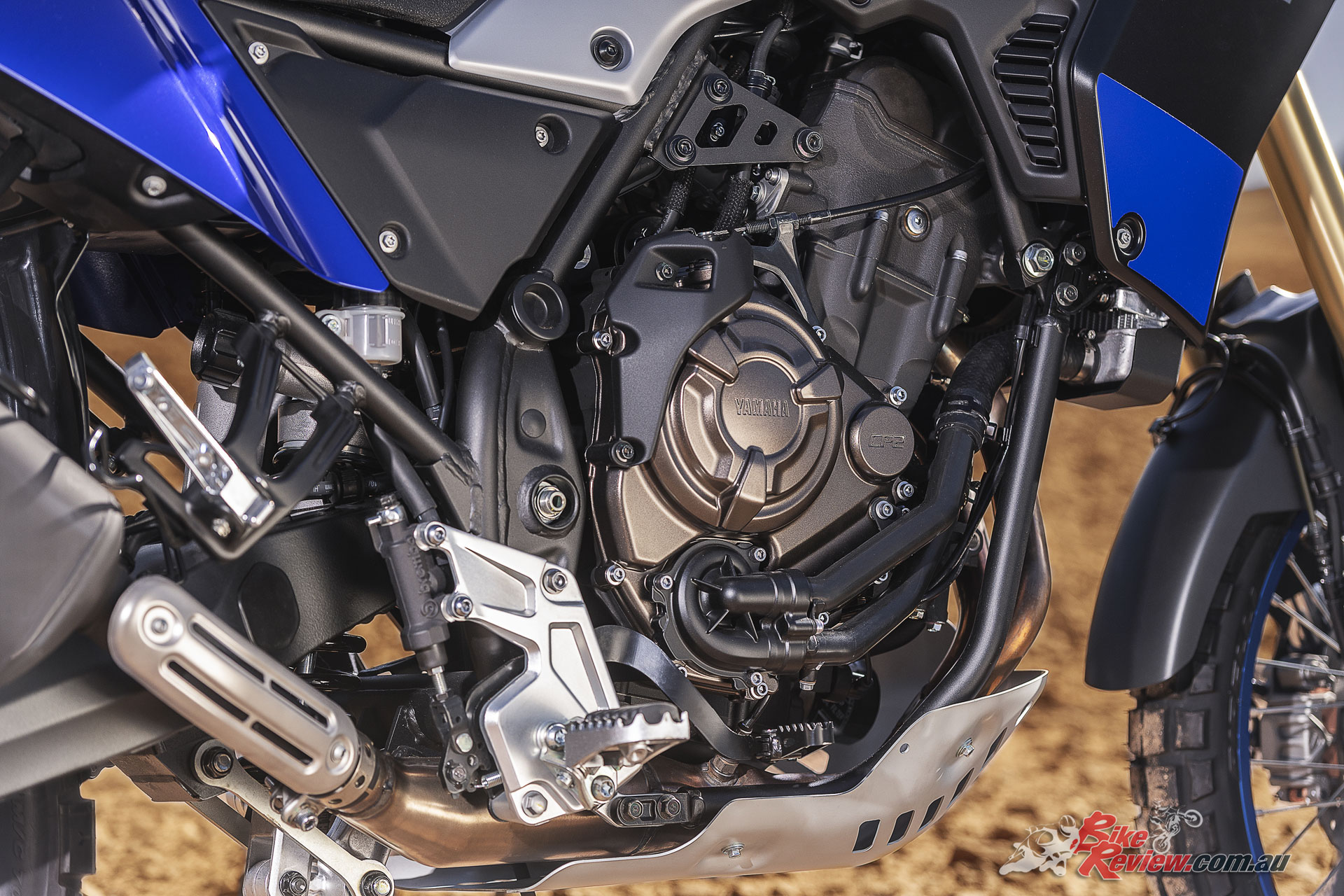 Yamaha development of crossplane philosophy engines powers a range of the company’s best-selling models, and the new Ténéré 700 is equipped with the highly respected 689cc parallel-twin engine.

The key characteristic of this compact CP2 engine is its strong and linear torque output that gives instant throttle response together with outstanding acceleration – attributes that make it a capable and versatile performer on and off the road. Producing maximum torque at 6500rpm, the engine offers excellent fuel economy, contributing towards the Ténéré 700’s ability to cover long distances between fuel stops. 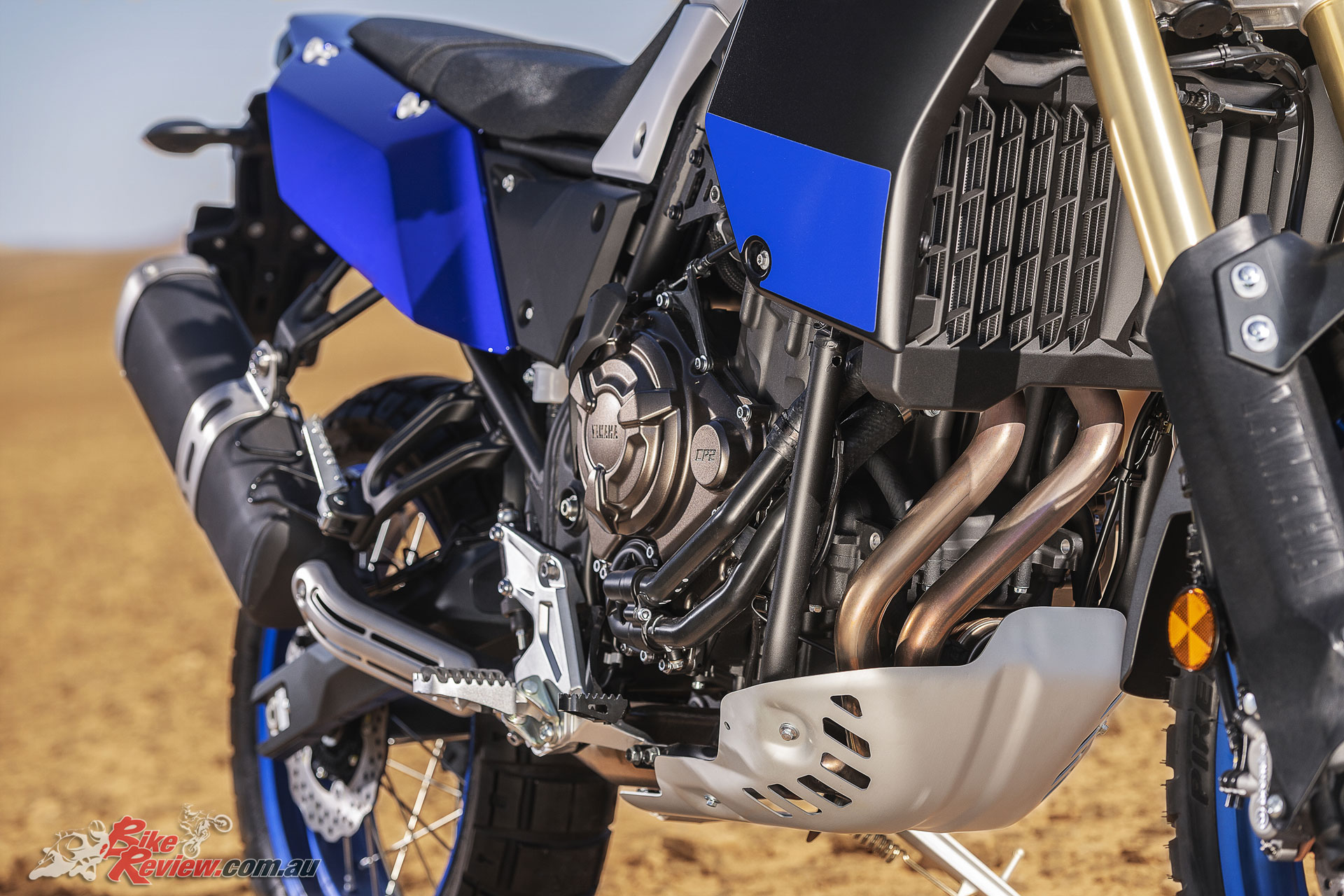 To cater for the unique requirements of Adventure riders, the final transmission is optimised, and feature a range of model-specific fuel injection settings.

For development of the Ténéré 700 one of Yamaha’s key goals was to achieve a slim, agile and light feeling chassis that would be suited to both road and off road riding. To satisfy these requirements designers developed an all-new lightweight double cradle tubular steel frame that combines a low weight with immense strength, making it ideally suited a variety of riding conditions. 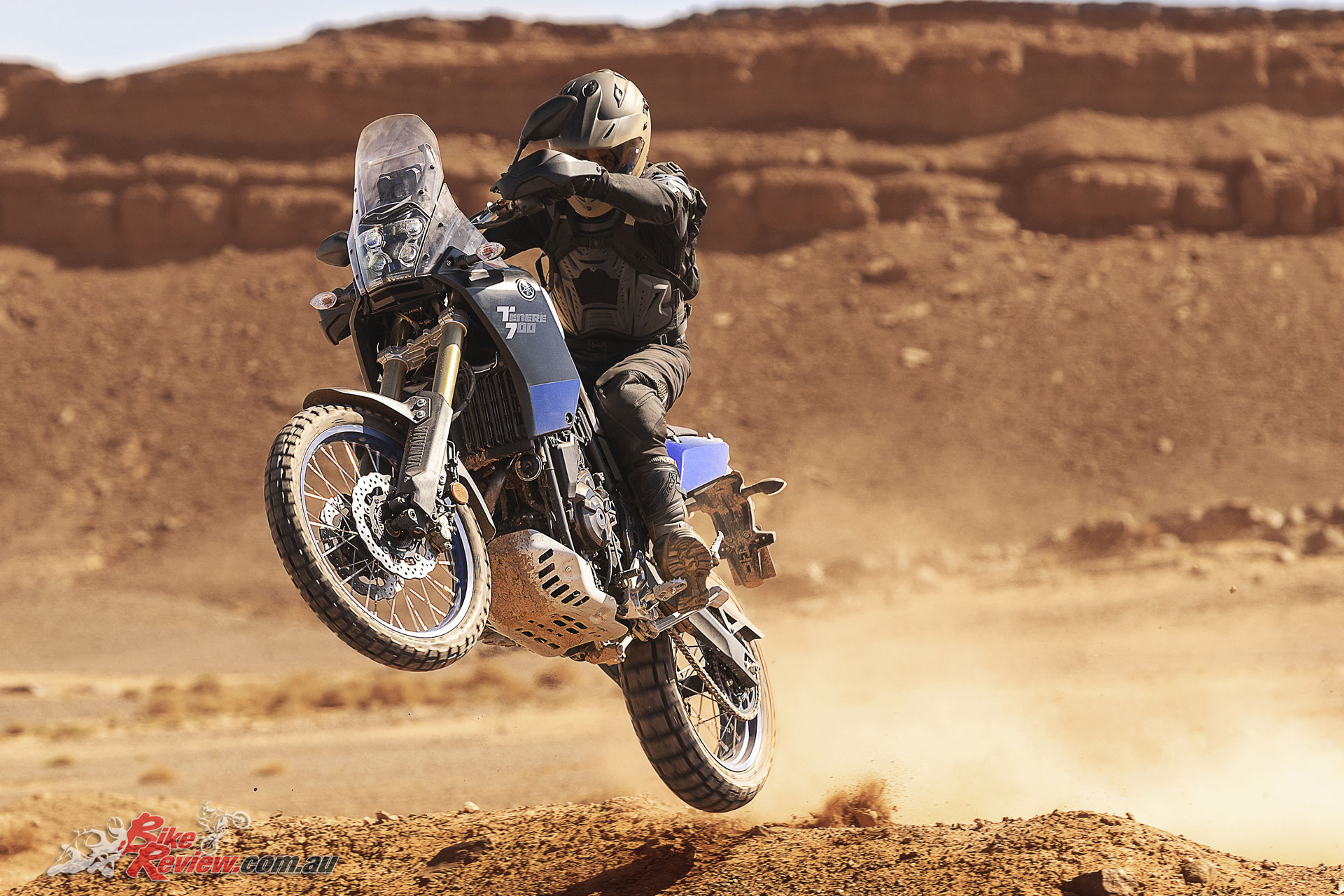 Featuring a compact 1590mm wheelbase and a slim body, the chassis delivers responsive handling characteristics, and with 240mm of ground clearance the Ténéré 700 is designed to keep its rider out of trouble over the roughest terrain.

The Ténéré 700 is also equipped with a flat 880mm high seat and slim body that allows maximum rider agility. The compact bodywork and narrow fuel tank also enable riders to grip the tank with their knees whether sitting or standing, giving added confidence and control in every situation, dirt or asphalt. 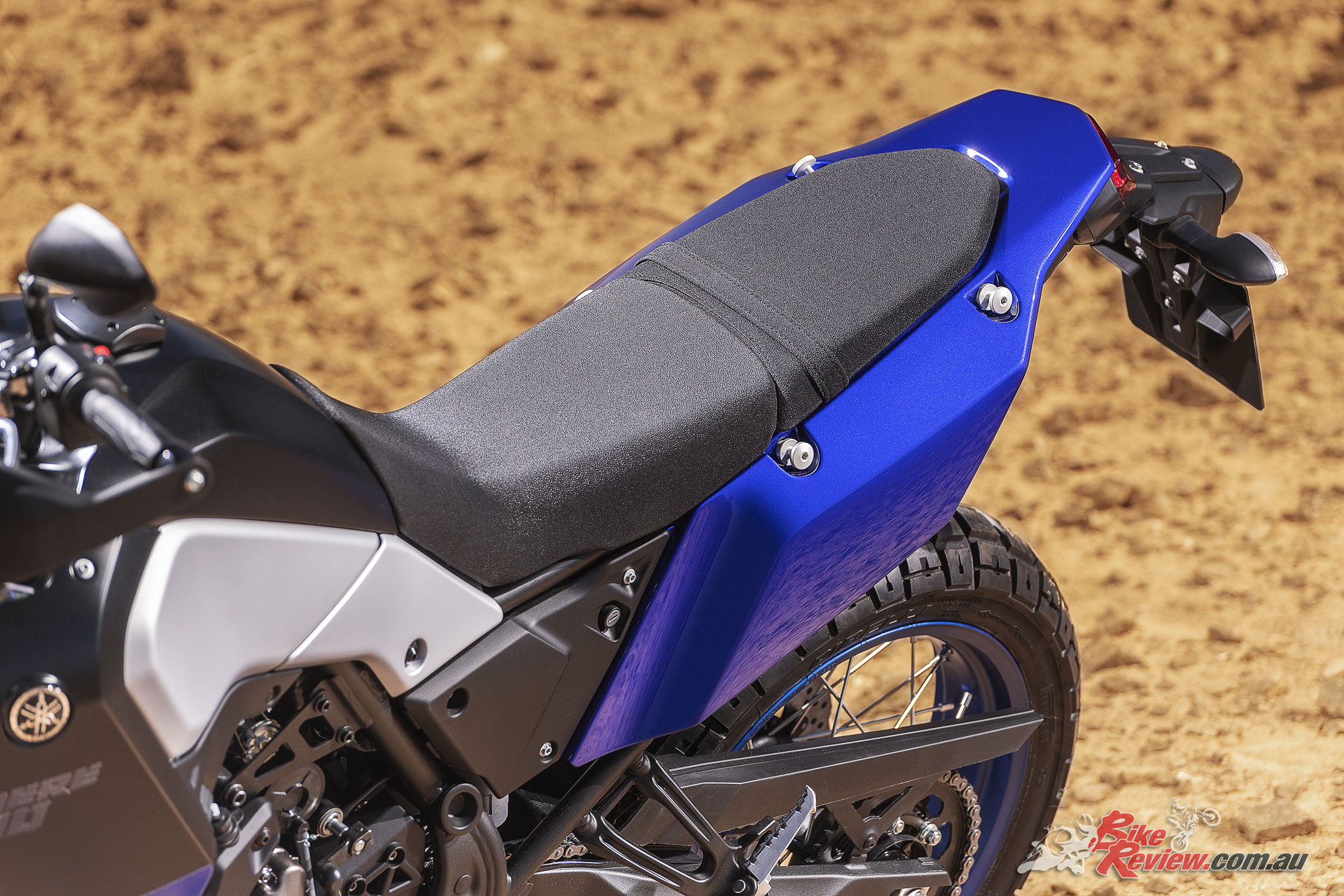 The new Ténéré 700 is equipped with a distinctive looking headlight assembly that is a direct spin off from Yamaha’s latest factory Rally bikes and the T7 concept machine. A total of four LED headlights project powerful beams of light that can light up the darkest wilderness. Stacked in a 2 + 2 layout and protected by a clear nacelle – and with two LED position lights at the base – this face gives a purposeful look that matches this bike’s imposing character. 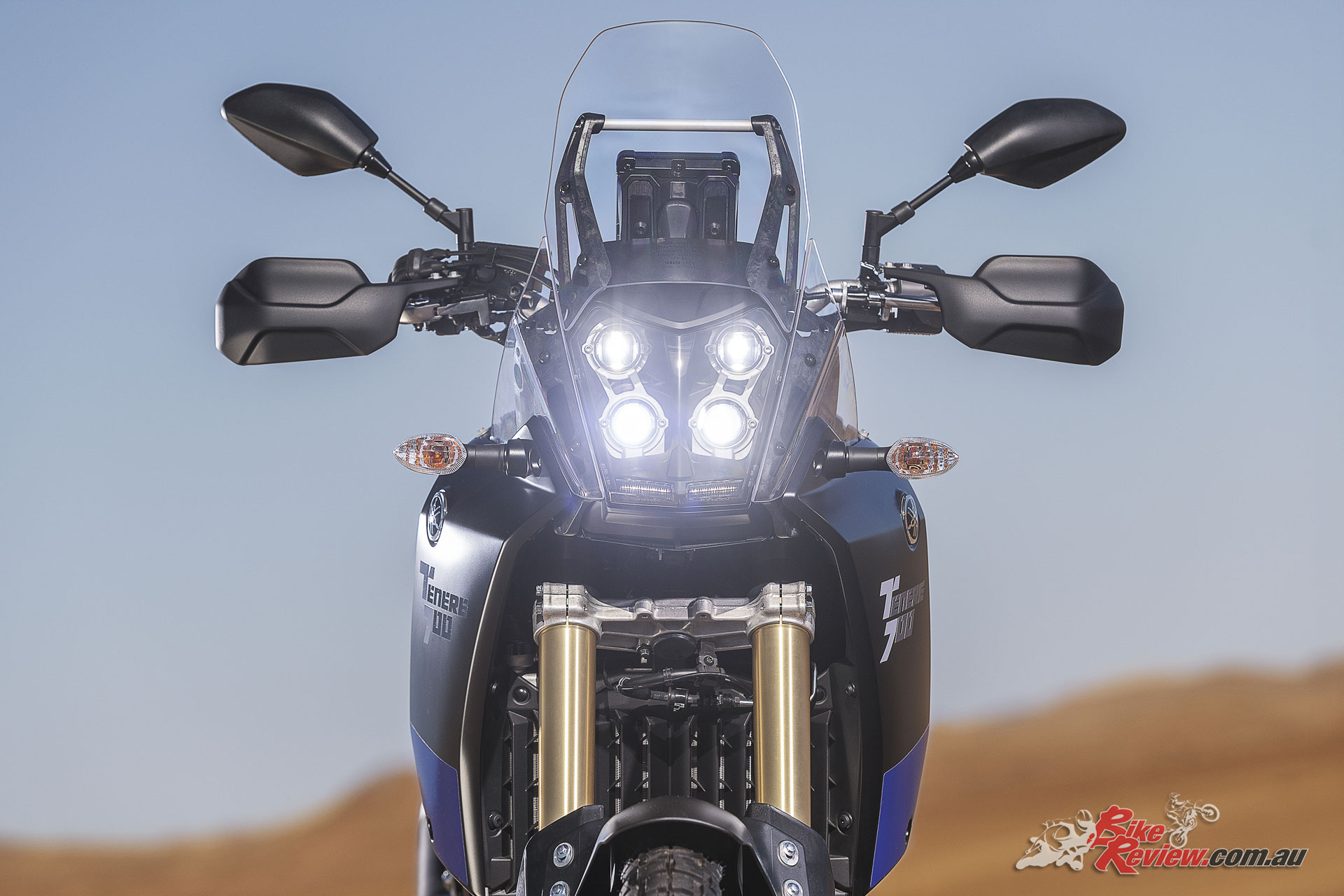 The Ténéré 700’s long travel flex resistant 43mm forks stay in shape over the most extreme terrain to give precision steering and smooth suspension action – with 210mm of suspension travel. Offering full damping adjustment, these rally-specification front forks ensure comfort with lightweight handling performance on the road as well as for long distance touring. Competition type tapered handlebars also give a relaxed riding position whether seated or standing. 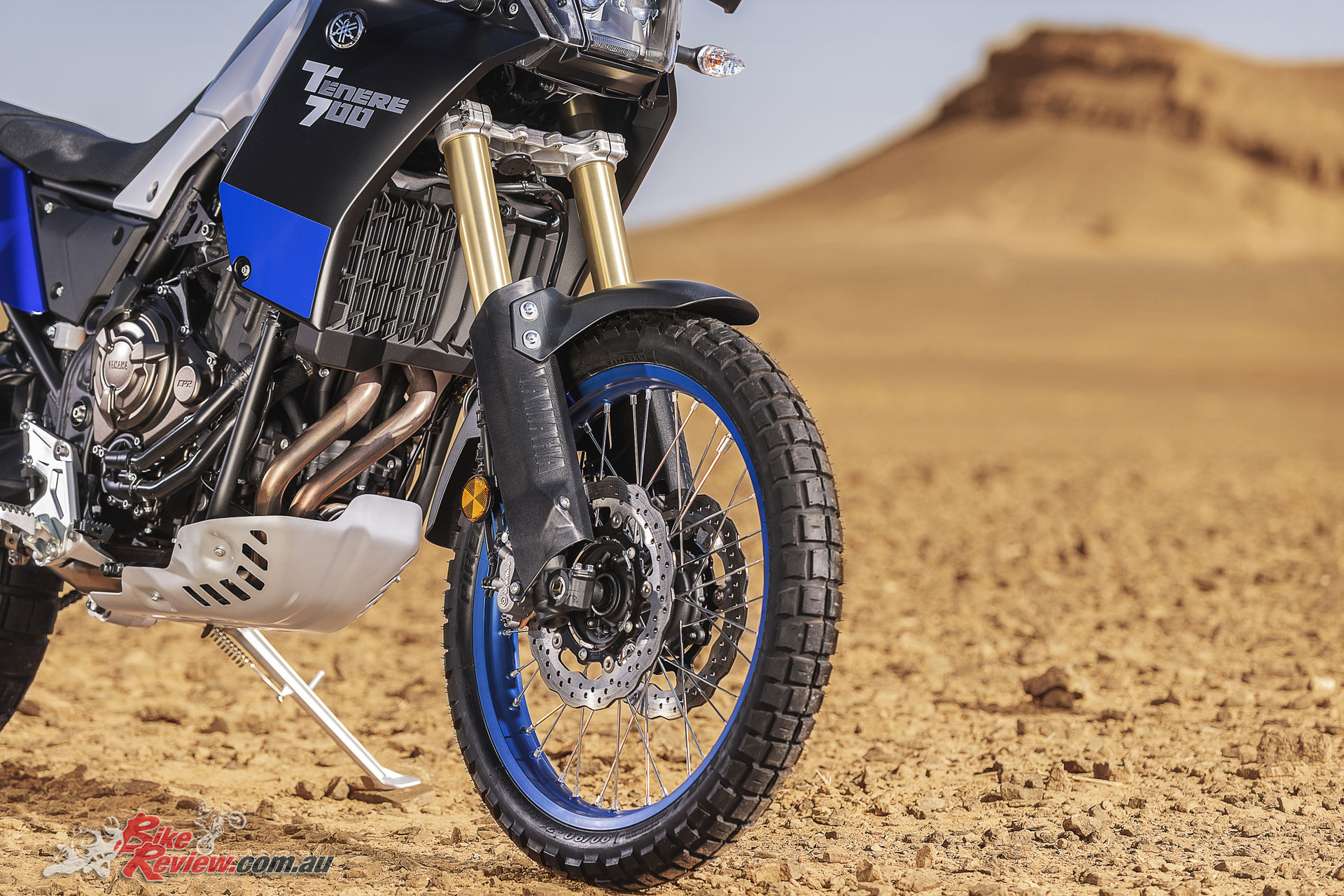 The Ténéré 700 is also equipped with a rally-bred link-type rear suspension system that gives smooth and progressive action for riding comfort and control and a lightweight aluminium swingarm offers low unsprung weight, with 200mm of travel. Another feature is the remote adjuster that allows fine tuning the preload settings on the go. 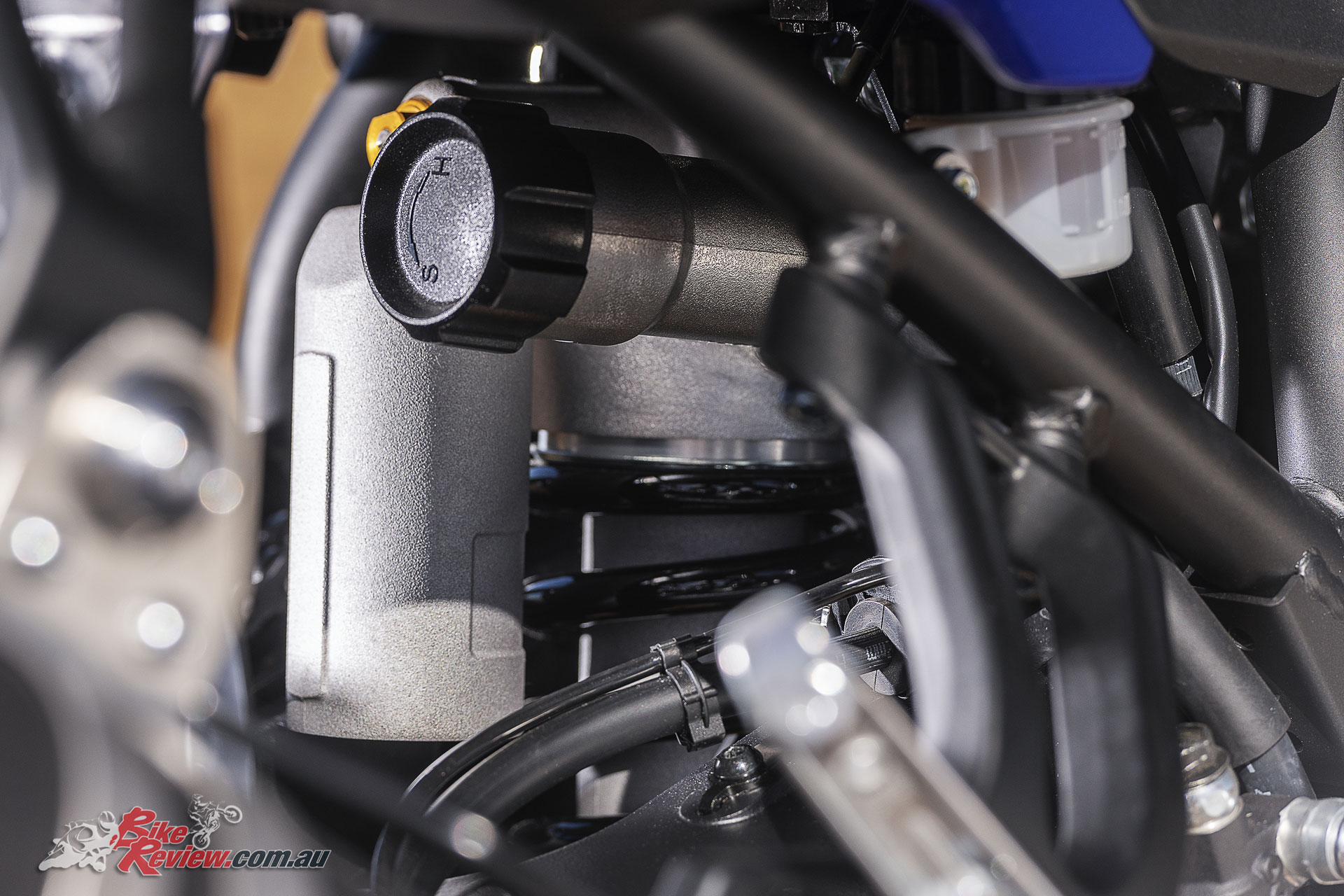 Spoked wheels demonstrate the bike’s aim of off road riding, while Pirelli Scorpion Rally STR tyres are fitted as original equipment, on the competition type 21-inch front wheel/18-inch rear wheel combination, allowing a wide choice of tyres to suit each rider’s own requirements. 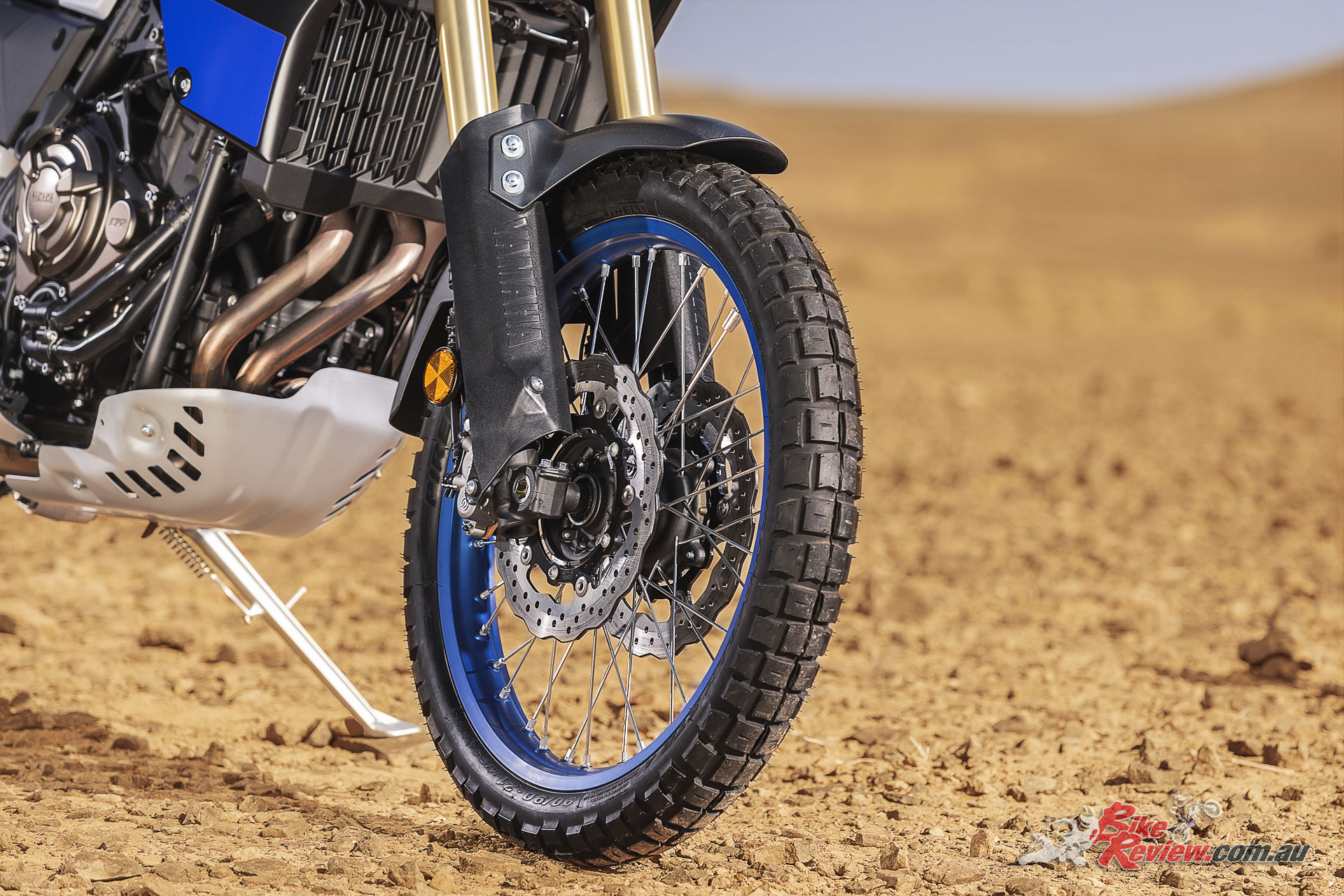 The slim design of the fuel tank belies its 16-litre capacity, and its narrow rear section offers plenty of rider mobility and excellent knee grip, with the fuel capacity giving a potential riding range of over 350km. 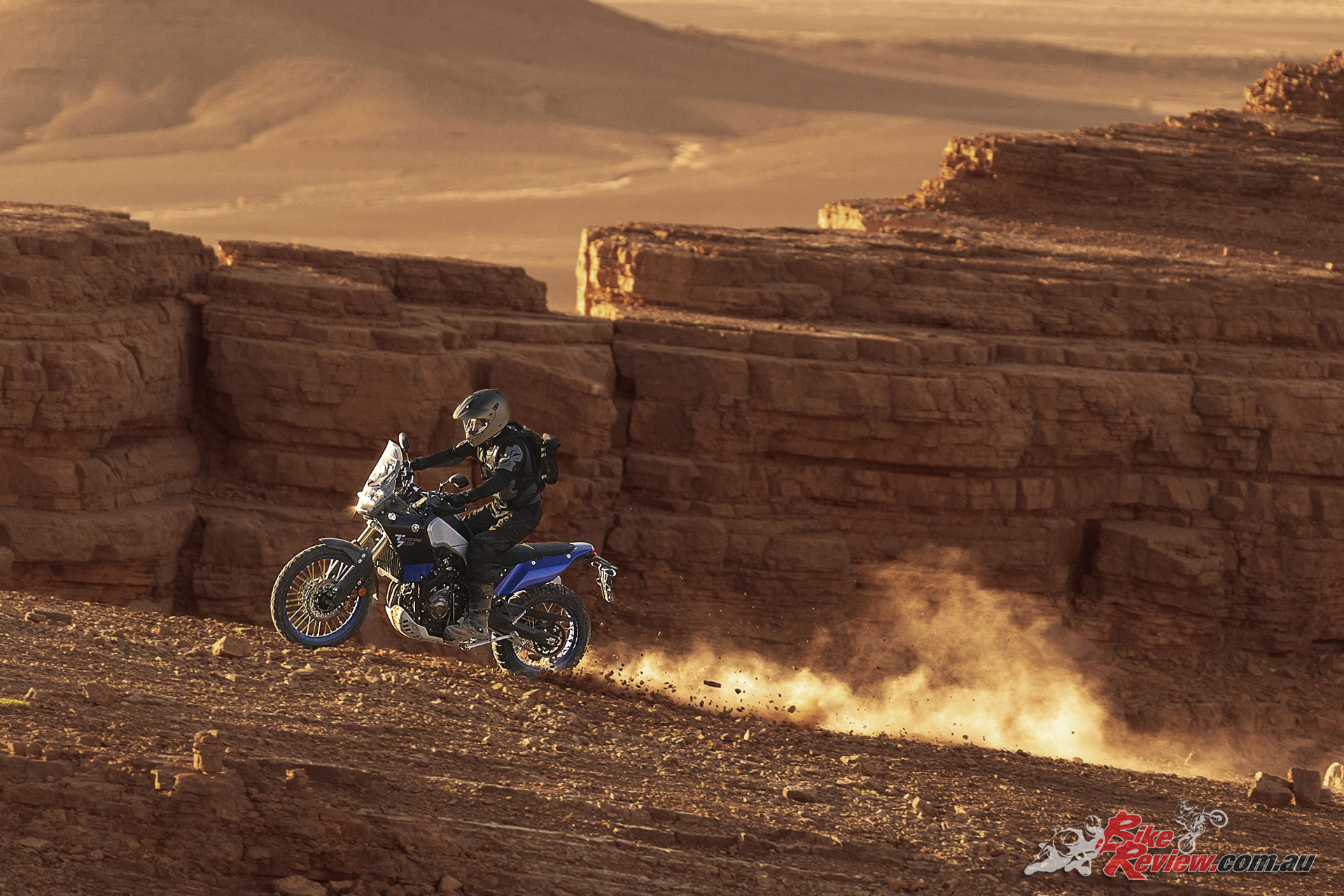 Another example of how the new Ténéré 700 has been developed using rally-bred technology can be seen with the compact rally style instruments. Located centrally behind the screen for great visibility, this lightweight instrument panel displays a wide range of information without taking your eyes off the path ahead. The multi-function LCD display features comprehensive information including gear position, fuel level, two trip meters and estimated fuel range, as well as average and instant fuel consumption and more. 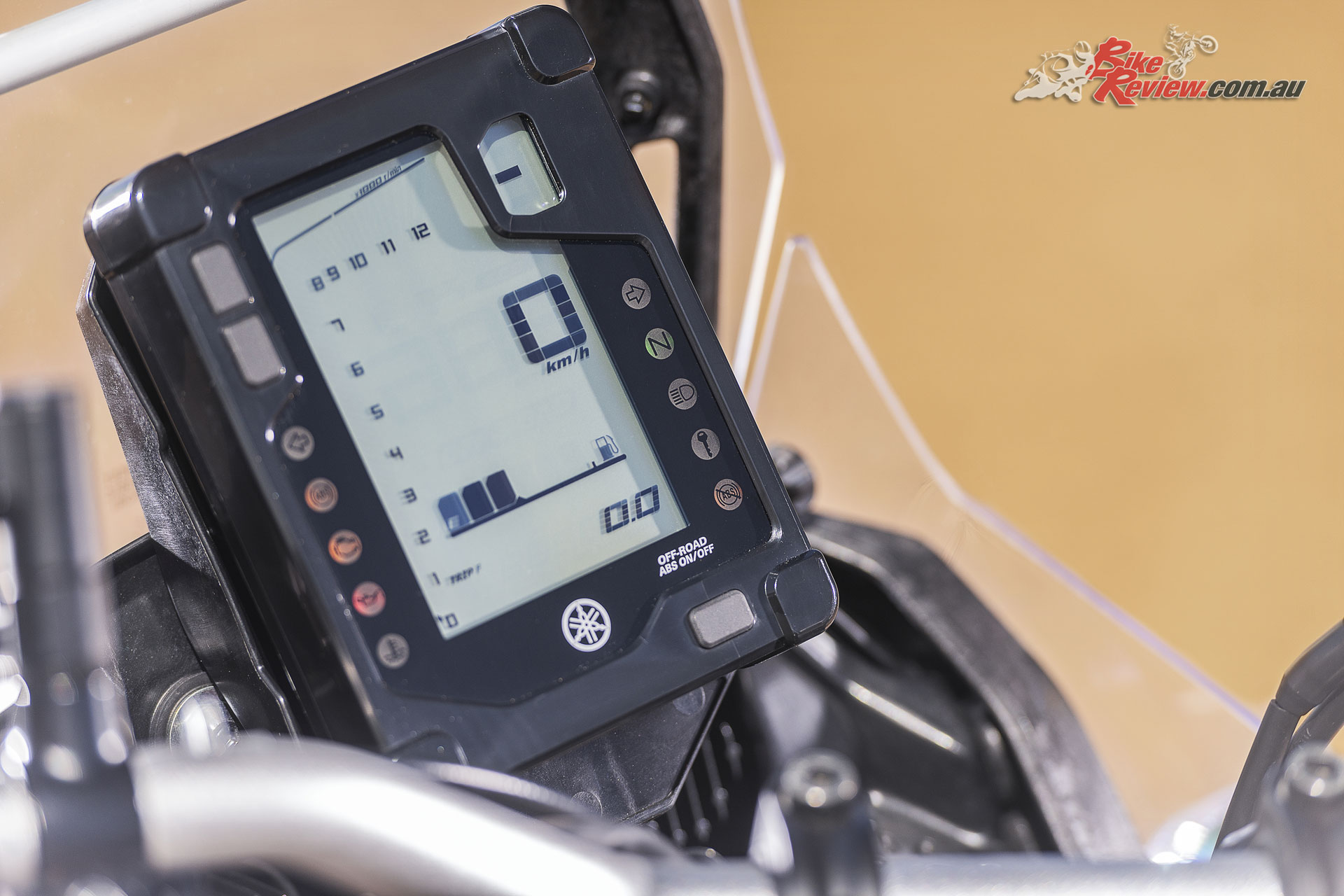 The cockpit is also designed to accommodate the fitment of aftermarket navigation devices, enabling extra equipment to be added, including GPS, road book readers and smart phones.

The braking system consists of dual 282mm wave front discs and a 245mm wave rear disc and when riding off road there’s the option to temporarily disable the ABS whenever required by activating the kill switch while stationary. 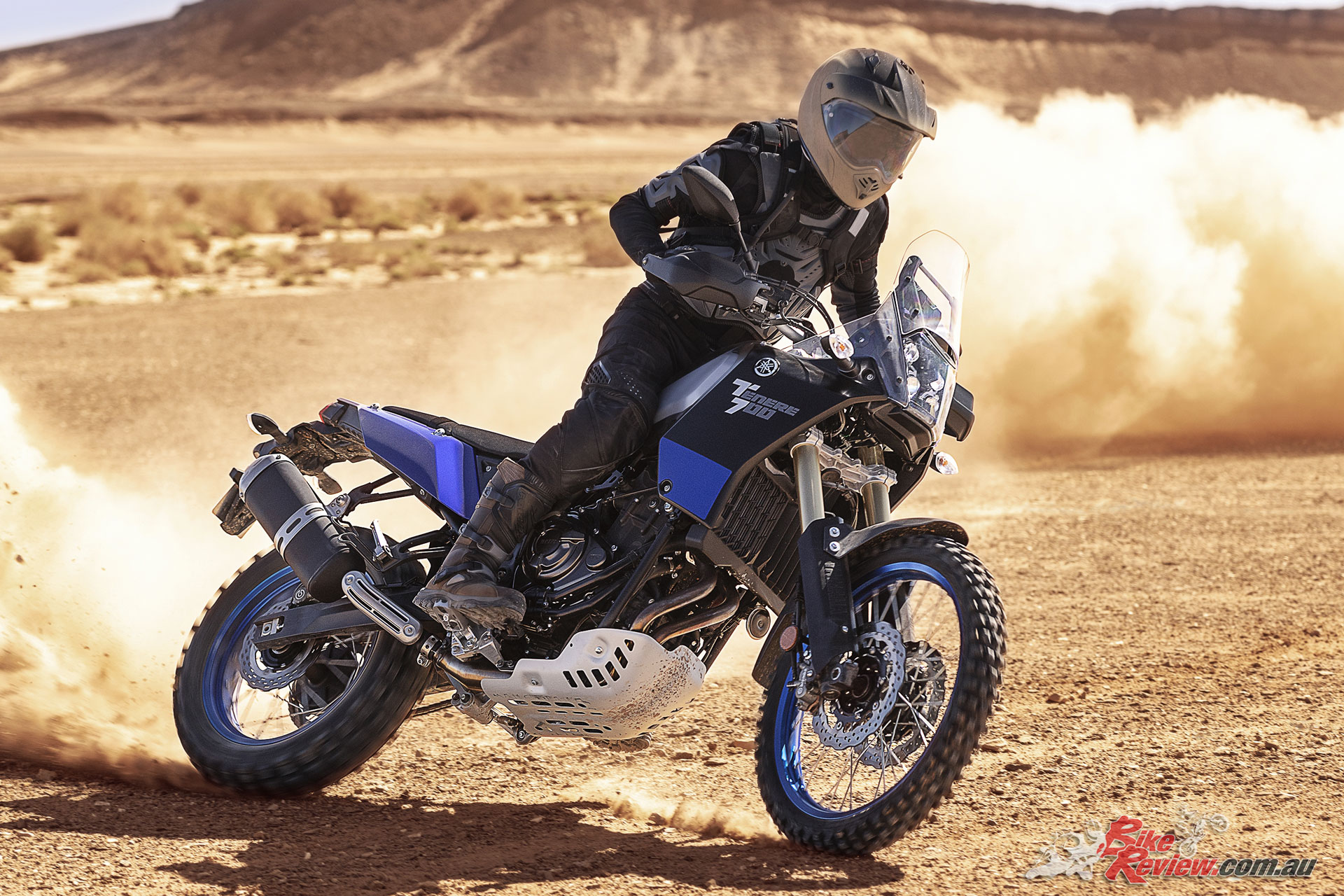 On long journeys the screen and front cowl have also been designed to offer good protection from the elements, and because of the bike’s slim and compact bodywork riders can tuck in tightly to the chassis and keep out of the main airflow. As well deflecting wind and rain, the tough plastic handguards also help to prevent damage from rocks and stones kicked up by vehicles and offer added protection from branches and foliage in the wilderness. 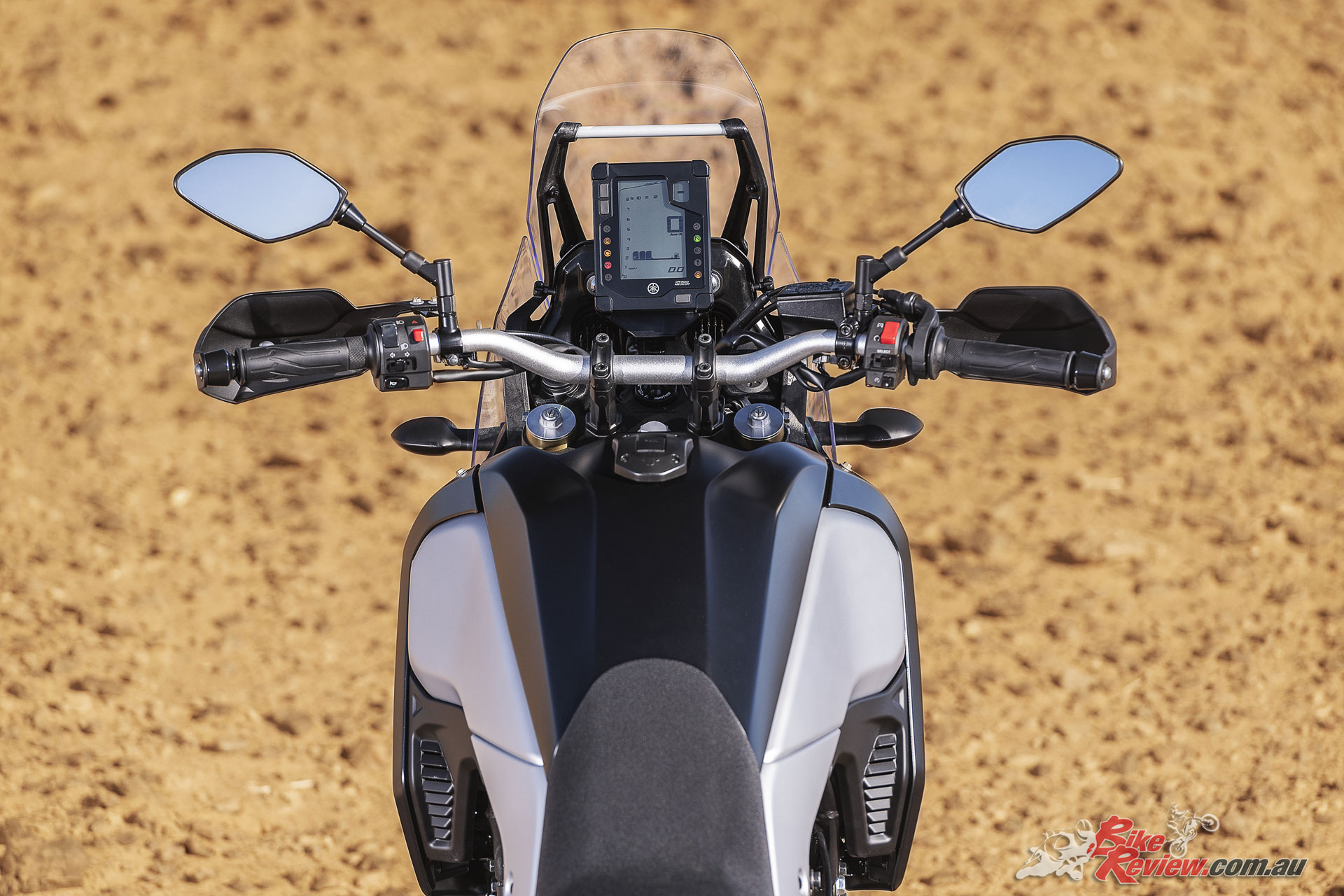 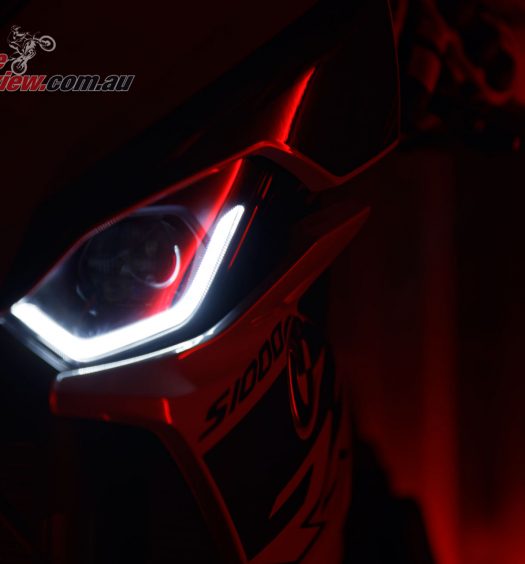 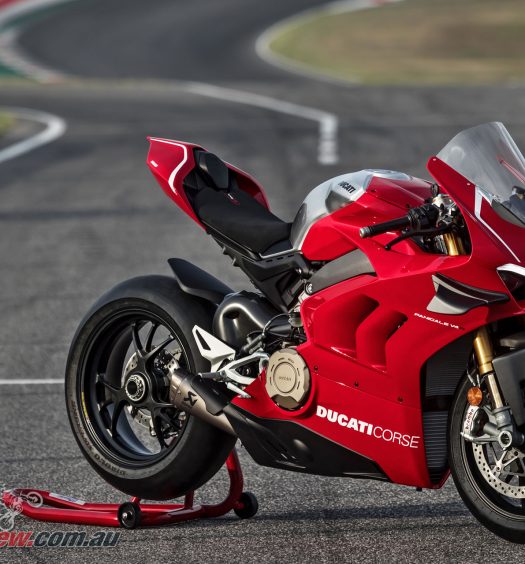