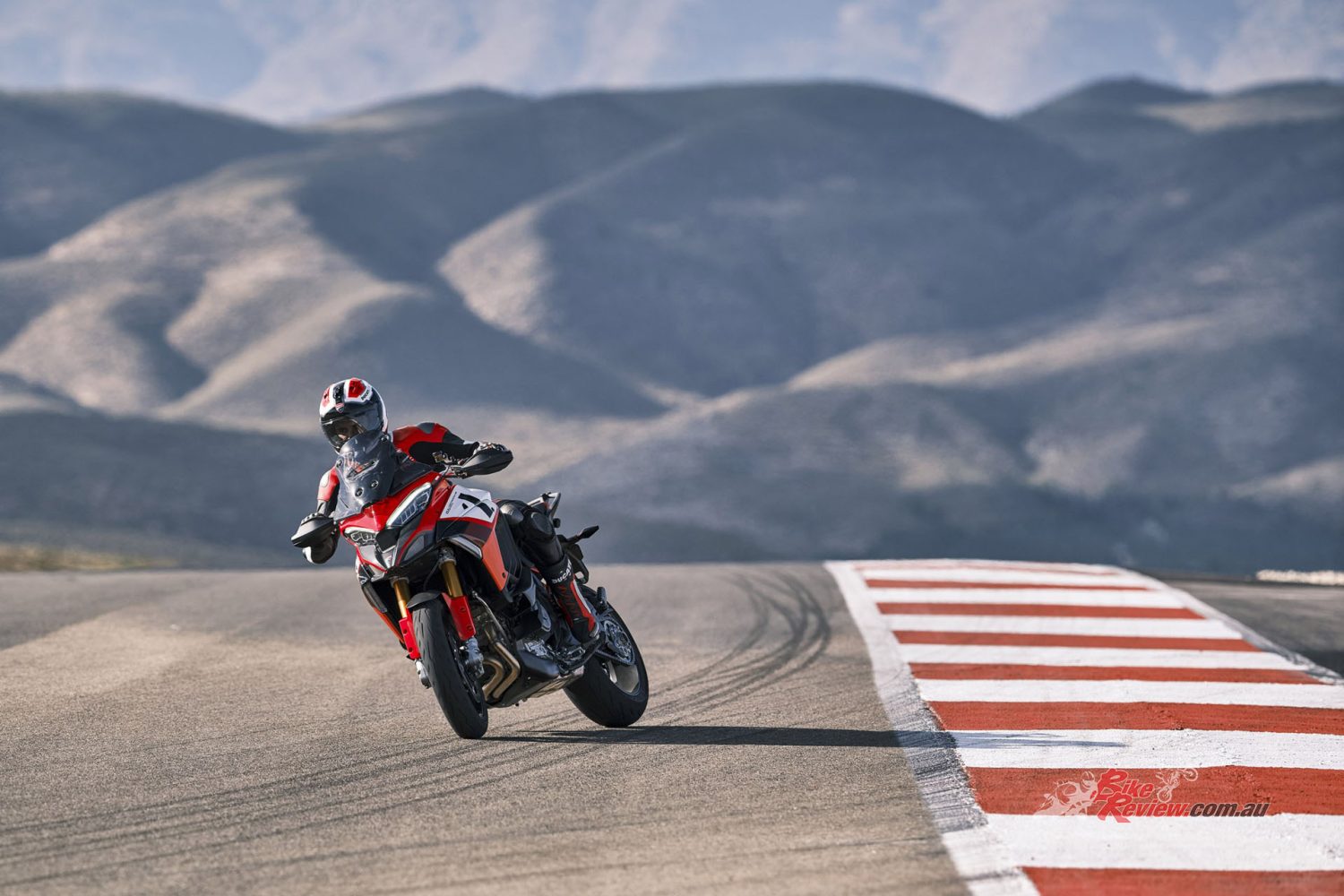 Ducati have released the first look at the new Multistrada V4 Pikes Peak through their World Première series. The bike will be arriving in Australia in Q2 of 2022...

The third episode of the Ducati World Première 2022 was dedicated to the online reveal of the new Multistrada V4 Pikes Peak! This special edition has a number of high end and high quality parts throughout the Multistrada V4. Press Release from Ducati ANZ. 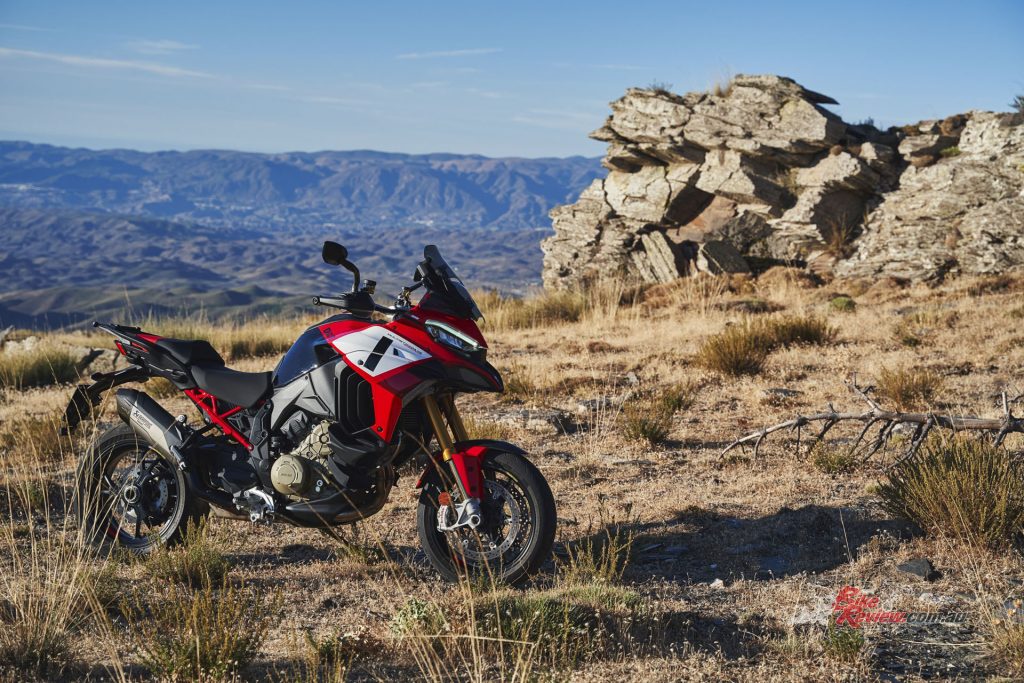 Ducati have released the first look at the new Multistrada V4 Pikes Peak through their World Première series.

The Multistrada V4 Pikes Peak takes life around the excellent Multistrada V4 platform with the V4 Granturismo engine, the contained weight, the ease of handling, the comfort for rider and passenger alike, state-of-the-art equipment and electronics.

Starting from these solid foundations, Ducati say the new V4 Pikes Peak was developed by introducing significant changes in terms of chassis set-up, premium ergonomics, electronic controls as well as numerous dedicated components, which give the bike a distinctly sportier attitude compared to the Multistrada V4. 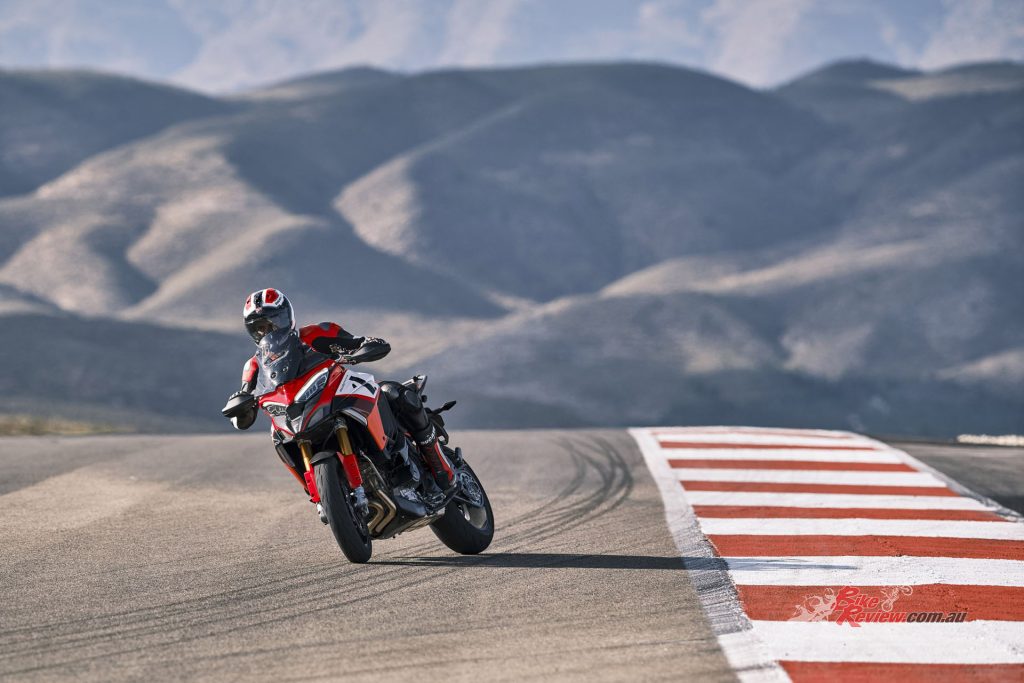 The design work behind this new project develops starting from the peculiar elements of the Multistrada V4 family, integrating them with the two elements that mainly identify this Pikes Peak version from an aesthetic and functional perspective, namely the 17” front wheel and the single-sided swingarm. The bike comes with a “Pikes Peak” livery, faithfully inspired both in colours and graphics by that of the Desmosedici GP ’21; even the number plates on both sides of the fuel tank contribute to highlight the deep link with the world of racing. 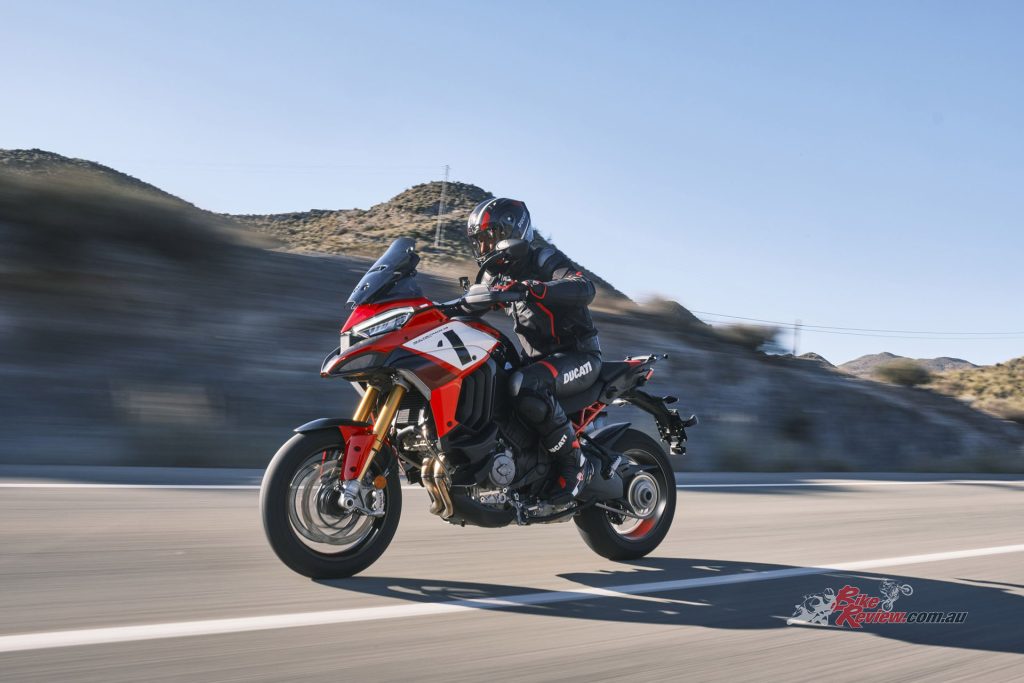 Ducati have been working towards making their premium Multistrada V4 to include even more high end parts!

The new Multistrada V4 Pikes Peak comes with a wide range of components made out of carbon fibre in addition to the Akrapovič titanium and carbon silencer (road-approved). Other distinctive aesthetic elements are the low smoked plexi, Öhlins front fork anodised gold legs, two-tone Black and Red rear saddle embellished with the V4 logo and the Ducati Corse badge applied to the “beak”. 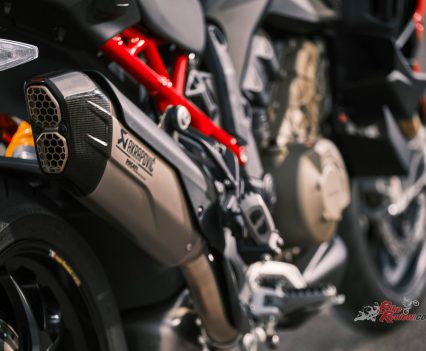 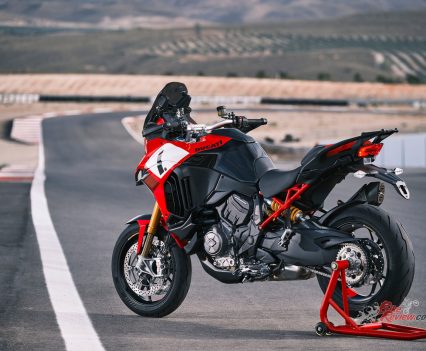 The chassis has been developed around the 17” front wheel, the new machine is fitted with sports road tyres (sizes: 120/70 front; 190/55-17 rear) and mounts Marchesini forged aluminum rims, 2.7kg lighter than those of the Multistrada V4 S, which contributes to the reduction of the total weight amount of 4kg compared to the Multistrada V4 S.

Additionally, Ducati say the Öhlins Smart EC 2.0 suspension also guarantees brilliant performance in sports riding, through the use of an “event based” mode, the same adopted by the Panigale V4 S and the Streetfighter V4 S, which automatically adjusts the setting according to the user’s riding style. 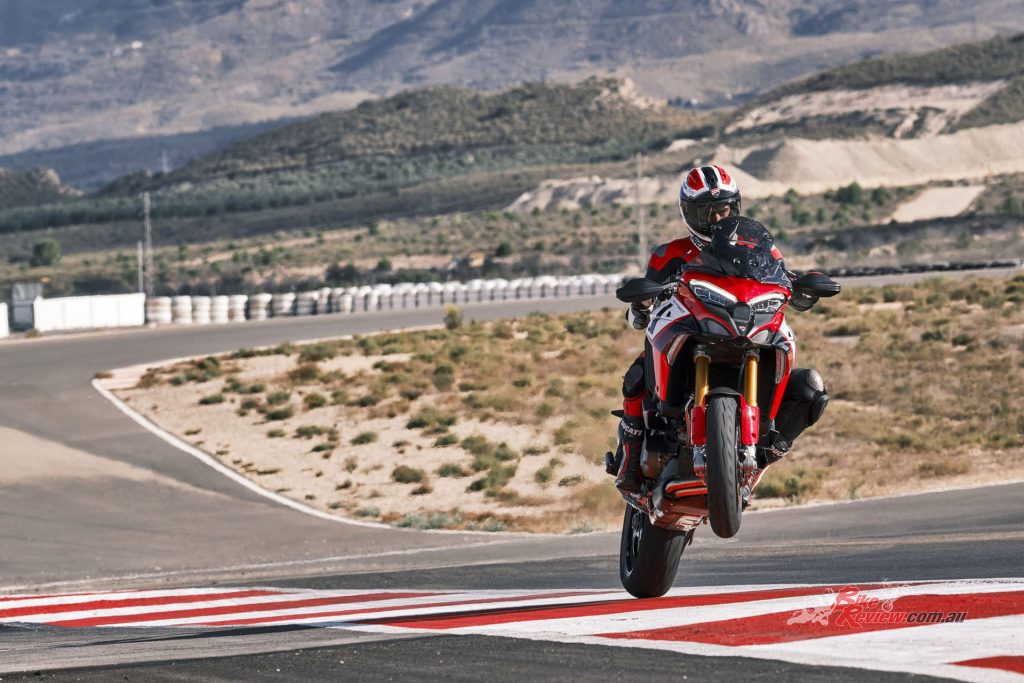 The aluminum monocoque frame has been refreshed with the precise objective of achieving a different inclination of the steering head (25.75° compared to the 24.5° of the Multistrada V4).

The braking system of the new V4 Pikes Peak is at the top of the segment and derives directly from the Panigale V4. At the front, the system includes 330mm diameter discs and Brembo Stylema monobloc calipers. At the rear, the system features a single 265 mm diameter disc with a Brembo floating caliper.

Compared to the Multistrada V4, the riding position has been completely refreshed: the footpegs are higher and moved back to increase the maximum lean angle, while the handlebar is lower, narrower and has contained curved bars. 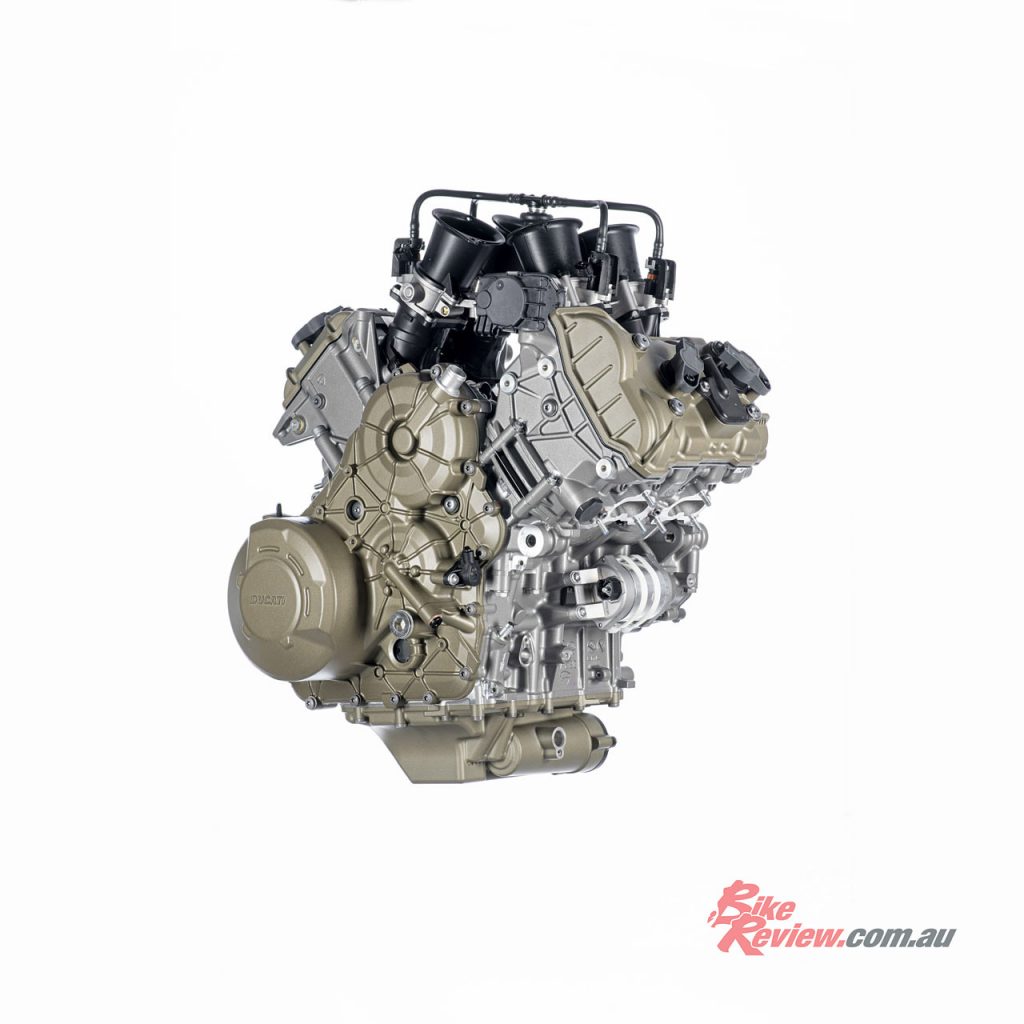 The V4 Granturismo has a displacement of 1,158 cc and delivers 170hp (125kW) at 10,500rpm with a maximum torque of 125Nm (12.7kgm) at 8,750rpm. In addition, adopting this engine allows for a significant lengthening of maintenance intervals: on the Multistrada V4 the oil change is scheduled every 15,000km, while valve clearance check and eventual adjustment is required every 60,000 km. No bike in production goes that far. 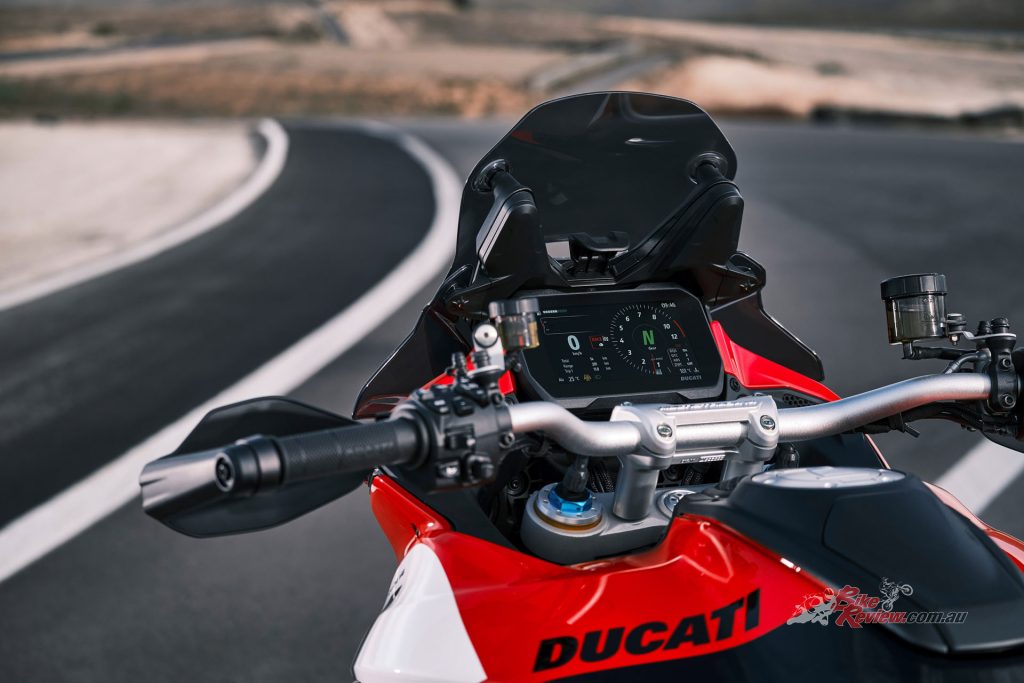 All the riding modes and assists are controlled through the full-colour TFT screen, the advanced Ducati Connect system has plenty of features such as call notifications and navigation.

Ducati have introduced the Race Riding Mode, which represents a first for Multistrada models. The Race option optimizes the high rev range and lower assist intervention. The quickshifter also has a dedicated strategy that allows extremely aggressive downshifts, as well as the implementation of an even more direct throttle response in High Power Mode. 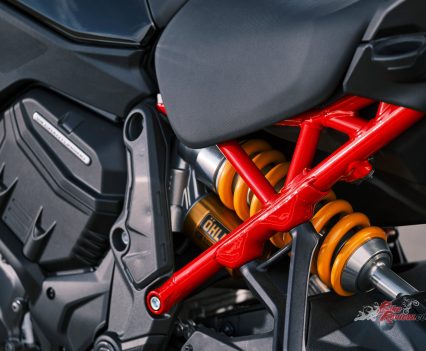 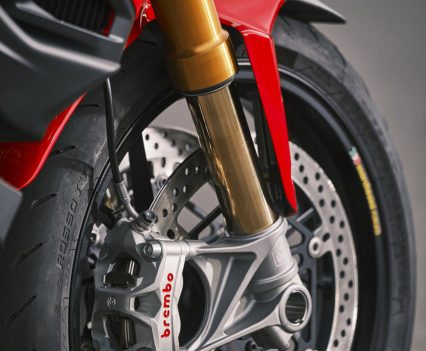 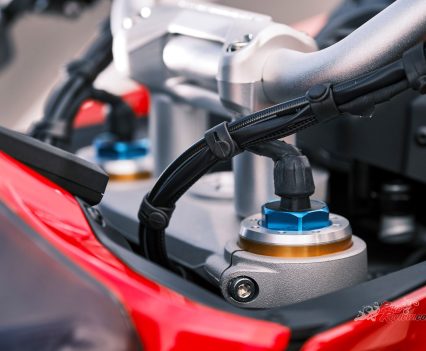 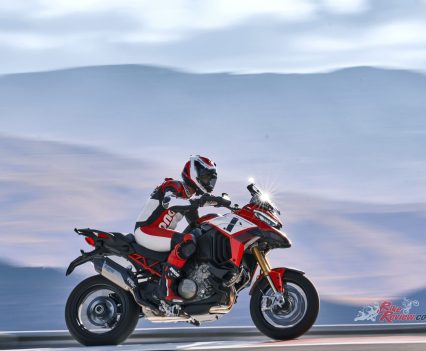 The Multistrada V4 Pikes Peak inherits the latest generation and sophisticated electronic package of the Multistrada V4 S, which includes, among others, the as-standard radar technology both at the front and at the rear, which offers Adaptive Cruise Control (ACC) and Blind Spot Detection (BSD). In addition to the introduction of the Race Riding Mode, Ducati Wheelie Control on the V4 Pikes Peak has had an update that offers an even better response and a more accurate control during dynamic riding. 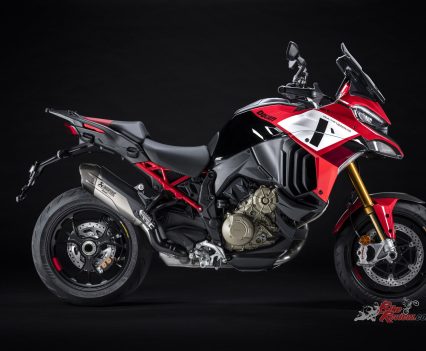 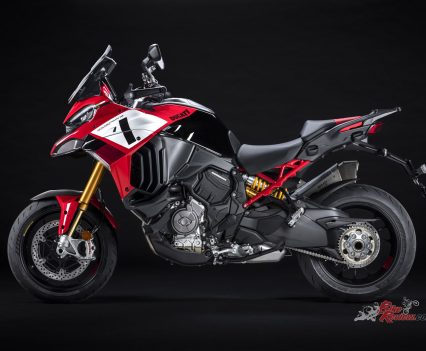 The suggested ride away price in Australia will be $44,500.

The Ducati Multistrada V4 Pikes Peak edition will land in Australian showrooms in the second quarter of 2022. Ducati Australia say it will have a suggested ride away price of $44,500. 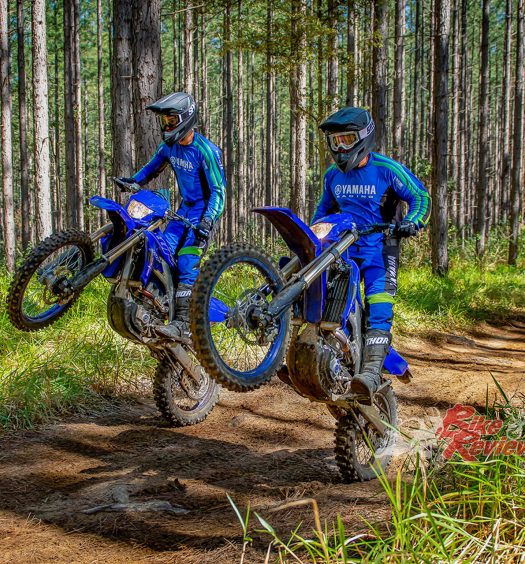 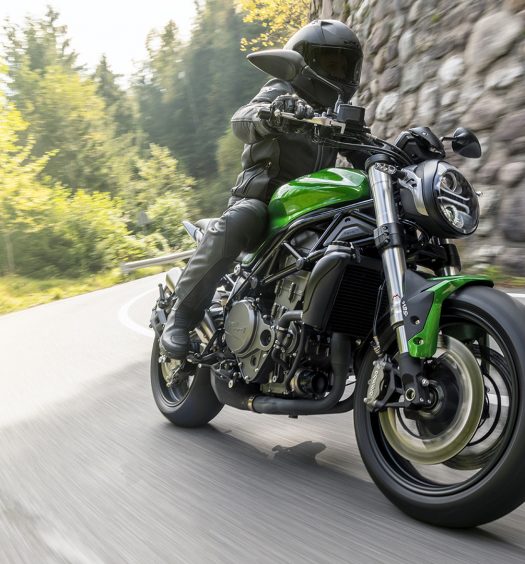