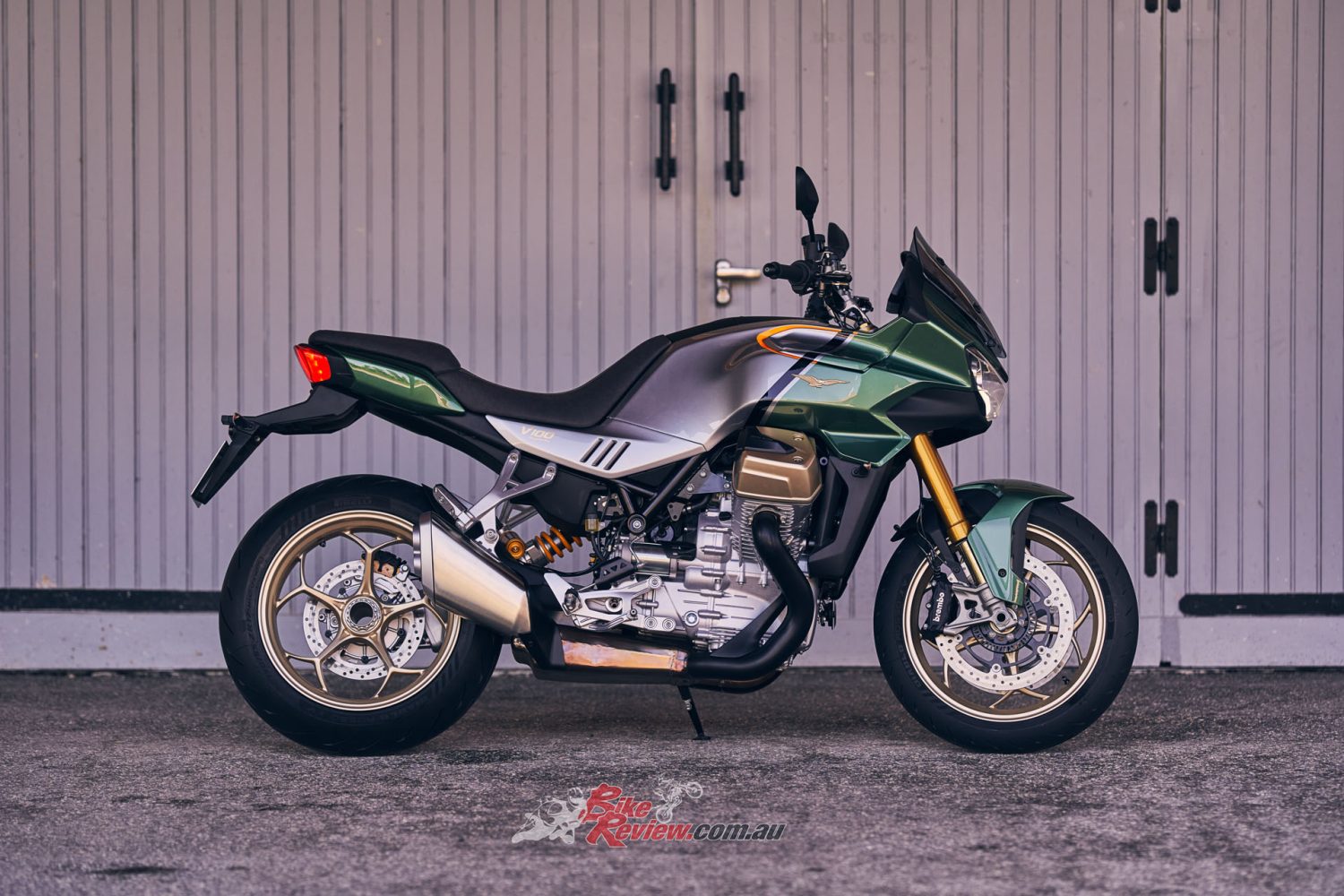 Moto Guzzi recently celebrated their 100 year anniversary with the announcement of the V100 Mandello. We now have all the information on this tech heavy bike that starts the next century of manufacturing for Moto Guzzi! 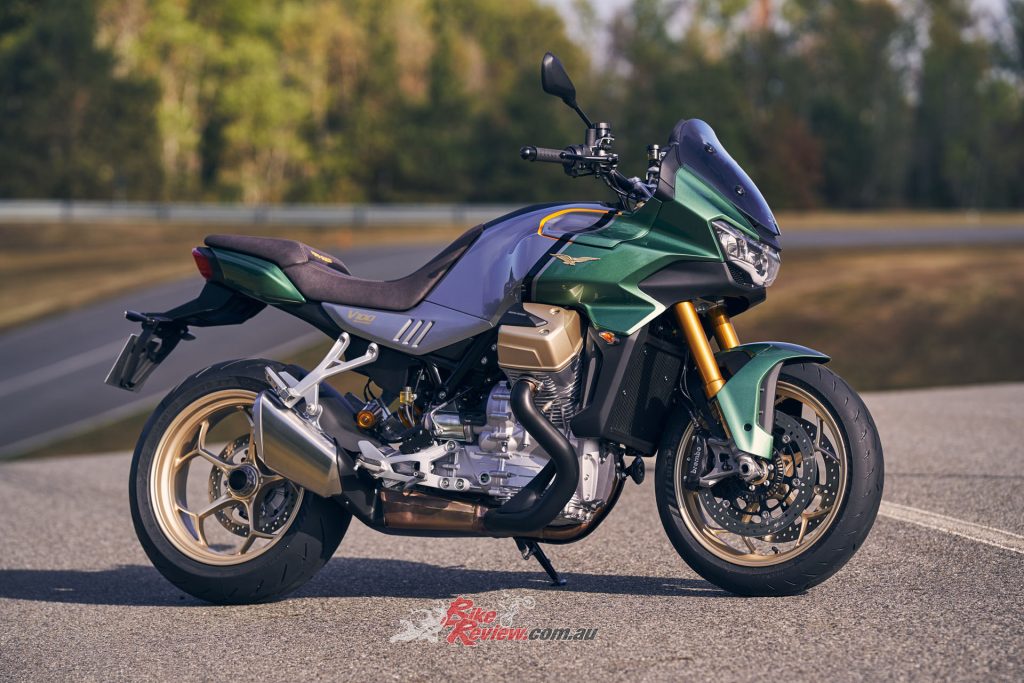 Moto Guzzi say the “100” comes from the history written during its first century, one of passion, skill, innovation, and success, both sporting and commercial. “100” as in the second century that has just begun. “100” to indicate, as is Moto Guzzi tradition, the displacement of the very modern new engine, the basis for a family of new generation motorcycles that will come to light in the future. 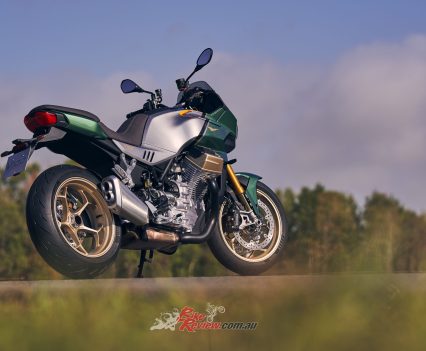 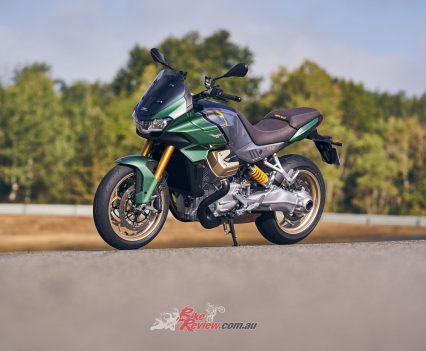 The Moto Guzzi V100 Mandello will mark the start of a brand-new chapter in the Moto Guzzi story. A bike that refuses to conform or fit into just one category, it will combine dynamic flair with the travel vocation that lives in the soul of every Moto Guzzi. A never-before-seen Moto Guzzi then, one characterised by cutting-edge technology, as the brand paves the way towards the future with innovative technical solutions and aerodynamics.

The V100 Mandello will represent a turning point in the brand’s history, the project introducing some very important technological innovations. It will be the very first motorcycle to offer adaptive aerodynamics, and the first Moto Guzzi to be equipped with advanced electronic solutions such as the six-axis inertial platform, cornering ABS, semi-active suspension and the quick shift, to cite just a few of the most important features. 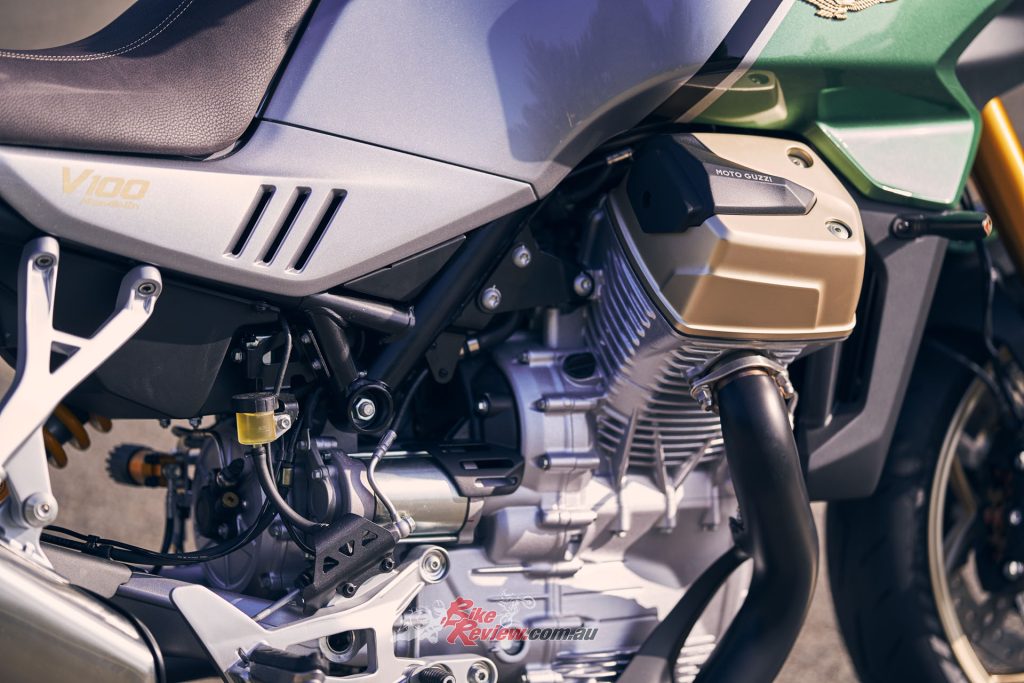 The new heads poking out the sides of the V100 show off the all new 1042cc powerplant! Still stunning Guzzi style! The heads are rotated 90 degrees, with the exhausts coming out the side. Radical!

It will also be the first Moto Guzzi to be powered by the new “compact block” engine, with its sophisticated technical characteristics. Tradition is respected with the 90° transverse V architecture of the twin, which guarantees that unique torque delivery and inimitable Moto Guzzi sound, but the powerplant is all new… 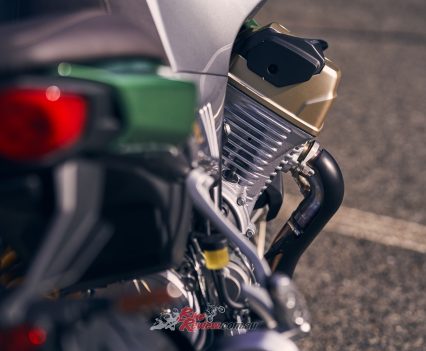 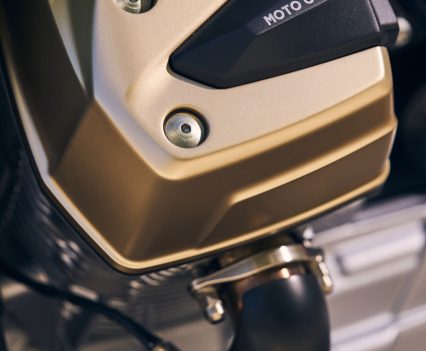 An innovative design has allowed for the development of an extremely compact and lightweight engine, which is 103mm shorter than the V85 TT small block. The new twin stands out from all the engines recently built in Mandello del Lario for its cylinder-heads, which are rotated by 90°, a decision that increases on-board comfort and rationalises the positioning of components in the intake and electronic injection systems [hopefully not cooking our legs in the process, we will wait and see – Ed]. 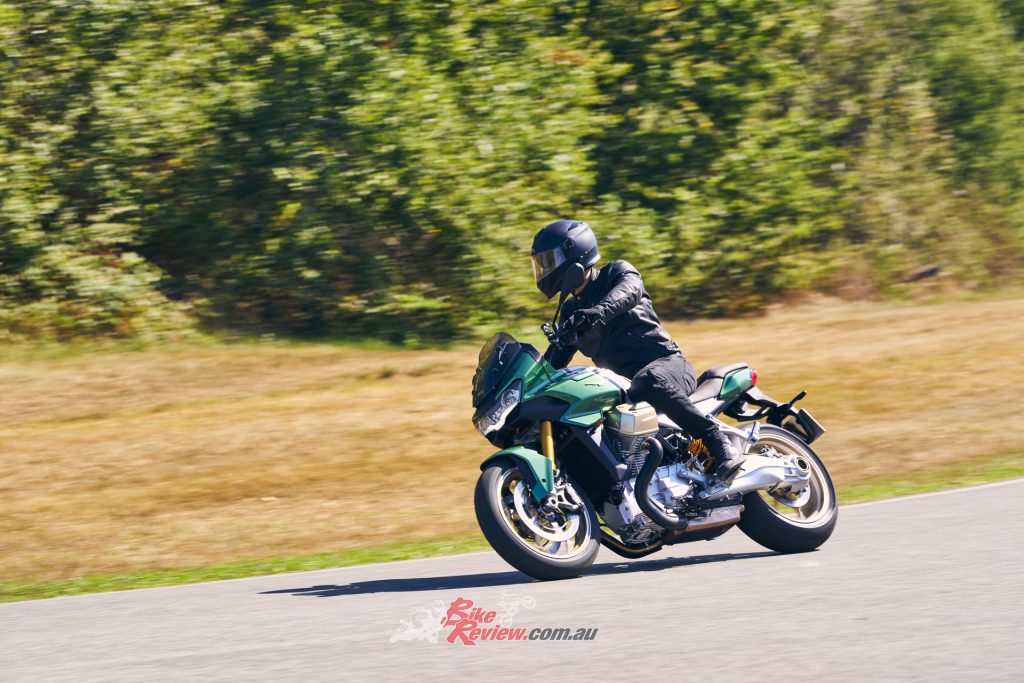 “Moto Guzzi claim performance is second to none, with power in excess of 115hp and torque of more than 105Nm.”

Its displacement equates to 1042cc, while timing involves a double overhead cams with finger followers and four valves per cylinder, which are chain driven. It also flaunts a wet sump system, a liquid cooling system, and a hydraulically-controlled wet clutch. 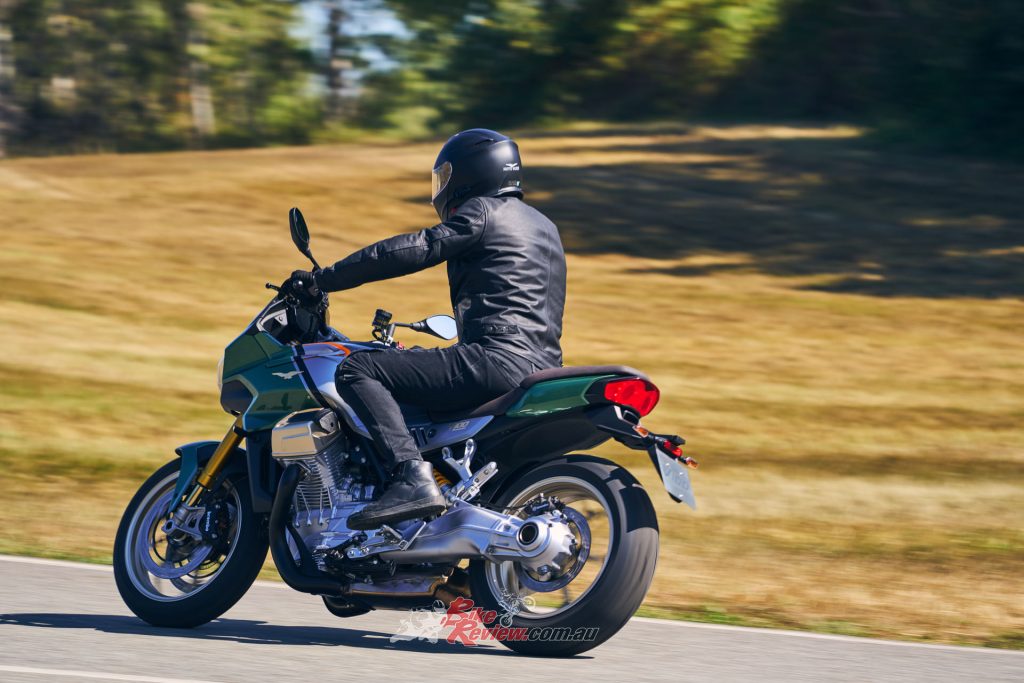 Everything on the V100 is new. Including an all new chassis with amazing technology throughout…

Moto Guzzi claim performance is second to none, with power in excess of 115hp and torque of more than 105Nm, with 90 per cent already available at 3500rpm and the limiter set at 9500rpm. The shaft drive employs a long aluminium single-sided swingarm, now positioned on the left. The drive shaft exit position, much lower with respect to previous Moto Guzzi engines, does away with any suspension reaction owing to the torque, with no need for a linkage on the swingarm. This makes for a smooth ride during acceleration and release, similar to that offered by a chain drive, but with the typical advantages of the shaft. 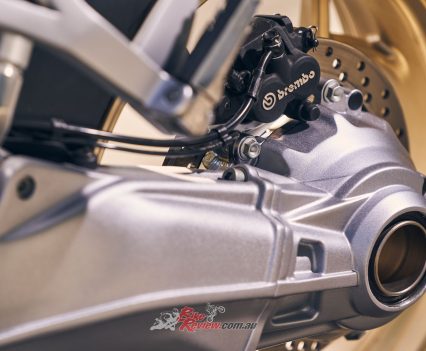 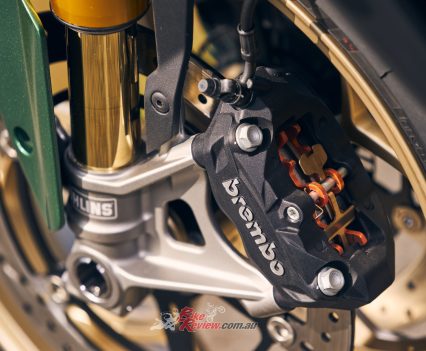 Brembo brakes all round. 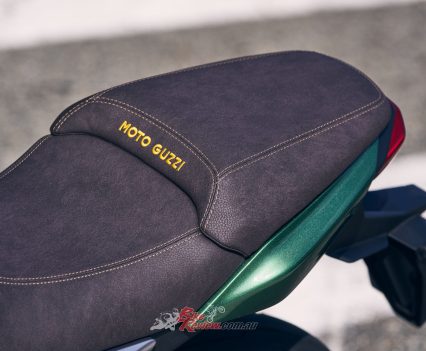 Comfort kept in mind for the passenger and rider. 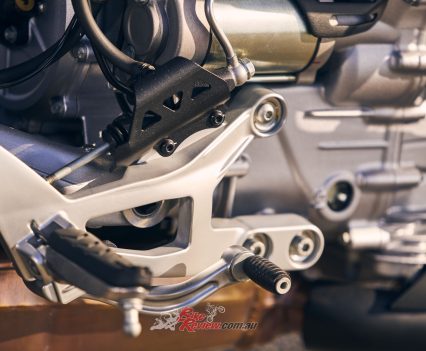 It’s not all just about the new engine, but a compact and manageable chassis, which Moto Guzzi say offers excitement through the turns and fast sections but also stability over more long-range trips, with that inimitable front wheel feeling. This is also thanks to the steel tube frame with a 1486mm wheelbase. Its touring attitude is boosted thanks to the significant comfort that the generous saddle and active, relaxed riding position afford. The adoption of a single variable-section aluminium handlebar is perfect for ensuring control during sporty riding while also offering a higher and more relaxed riding position when touring. 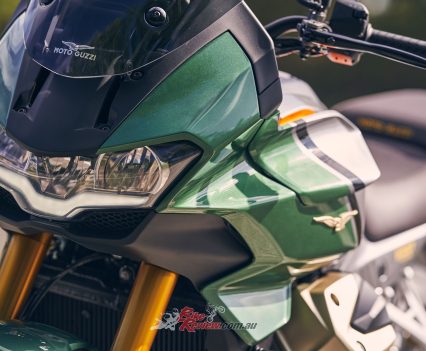 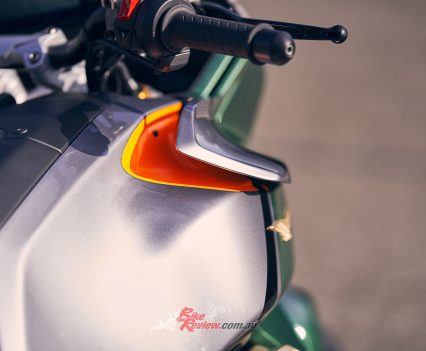 Opens and closes depending on bike speed.

Moto Guzzi technology also contributes to increasing both comfort and air protection, with the world-first adoption of an adaptive aerodynamic system that automatically adjusts the position of deflectors on the sides of the 17.5-litre tank depending on the speed and selected Riding Mode. The fully raised aerodynamic appendages reduce air pressure on the rider by 22 per cent, which brings V100 Mandello close to the level of air protection afforded by more voluminous and less sporty tourers, thanks also to the protection provided by the top fairing, the height of which can be electronically adjusted. 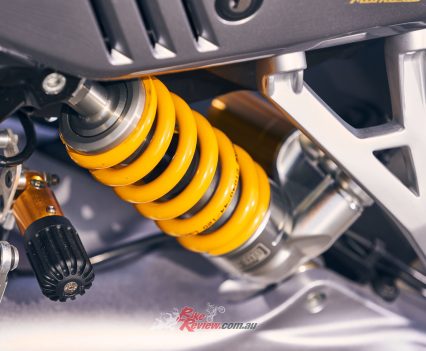 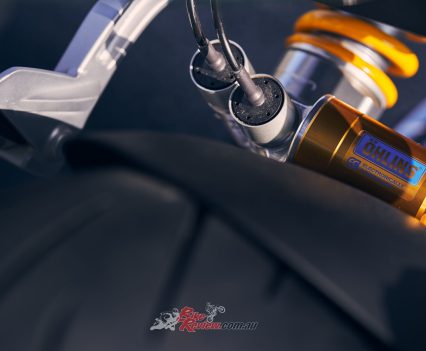 Adjustable based on riding modes.

This system contributes to what is a first-rate electronics package, comprising the Ride by Wire electronic accelerator for precise performance and consumption control, the advanced Marelli 11MP ECU, the six-axis inertial platform for effective management of the electronic controls, cruise control, and Cornering ABS to ensure active safety when braking through the turns. 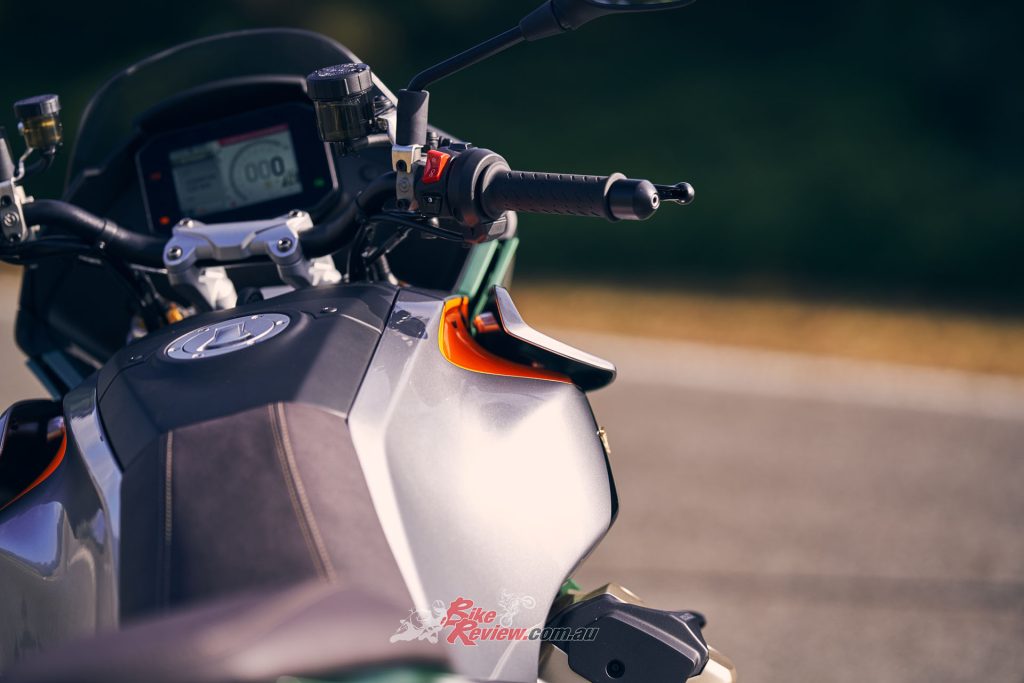 Riding modes are changeable through the TFT dash. Which also has phone connectivity for touring ease.

Four Riding Modes are available: Travel, Sport, Rain and Road. Each of these manages three different engine mappings, four levels of traction control, three levels of engine brake and (in the version that introduces them as standard) also calibration of the Öhlins Smart EC 2.0 semi-active suspension , which can adapt automatically, minute by minute, to suit the type of riding and the road conditions, for the best possible bike behaviour in any situation. Also included as standard is the 5in colour TFT instrumentation, full LED lighting with DRL and the “bending lights” system with a pair of additional lights that illuminate the entire corner, increasing visibility when leaning. 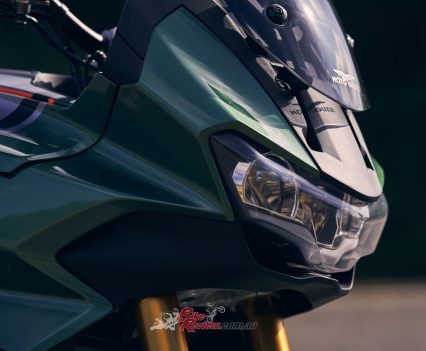 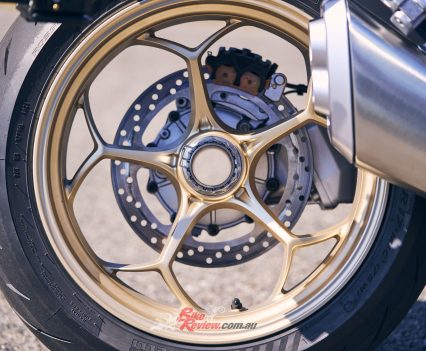 The V100 Mandello is available in two versions, which differ in terms of their trim. The more comprehensive version includes Öhlins semi-active suspension as standard, the quick shift, heated hand grips, and the Moto Guzzi MIA multimedia platform that allows a smartphone to be connected to the instrumentation via Bluetooth. Moto Guzzi MIA includes both the infotainment system for management of the voice assistant, phone calls and music via the intuitive handlebar controls, and the GPS function, which allows the rider to view directions directly on the instrument panel once a destination is set on the smartphone. 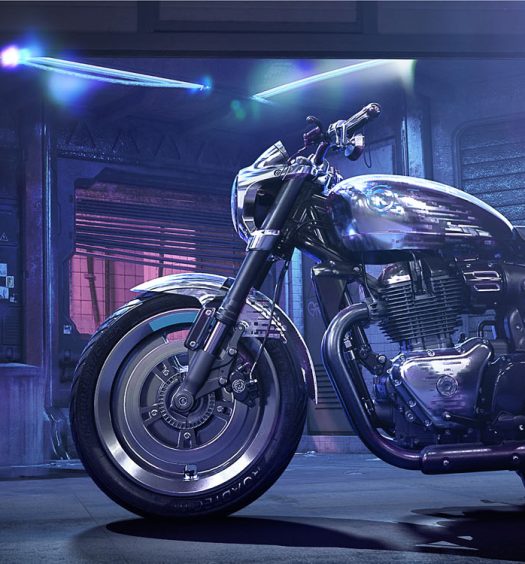 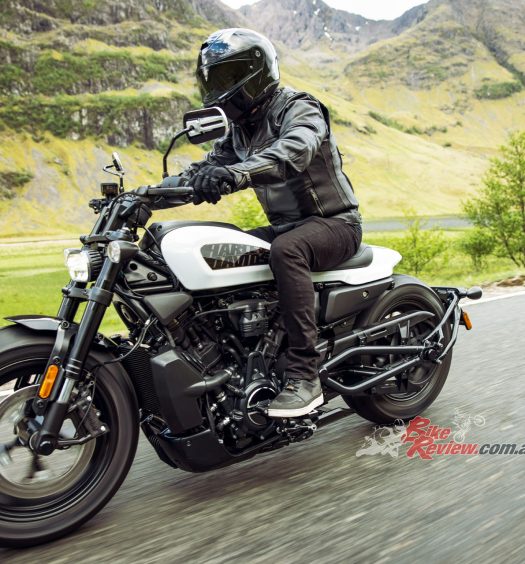