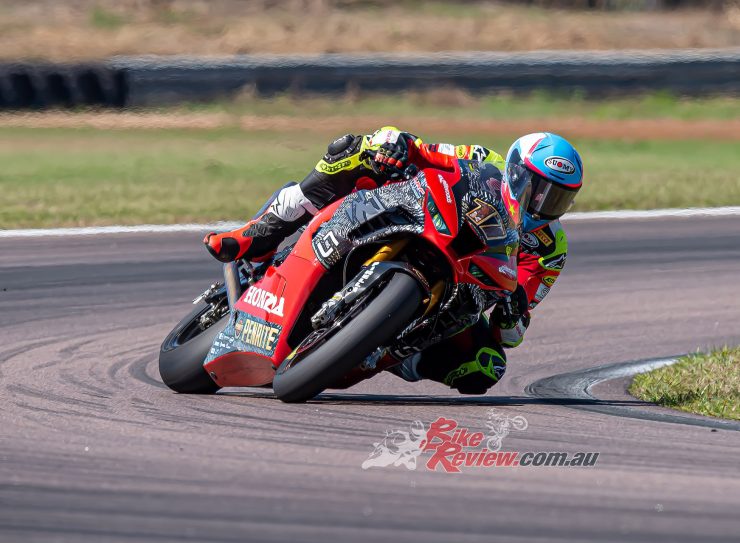 The qualifying sessions for the Merlin Darwin Triple Crown were one of the best and most exciting sessions seen in many years. While the early session just saw top riders do enough to avoid missing Q2, for the second session the top 12 riders in the country put on a show… 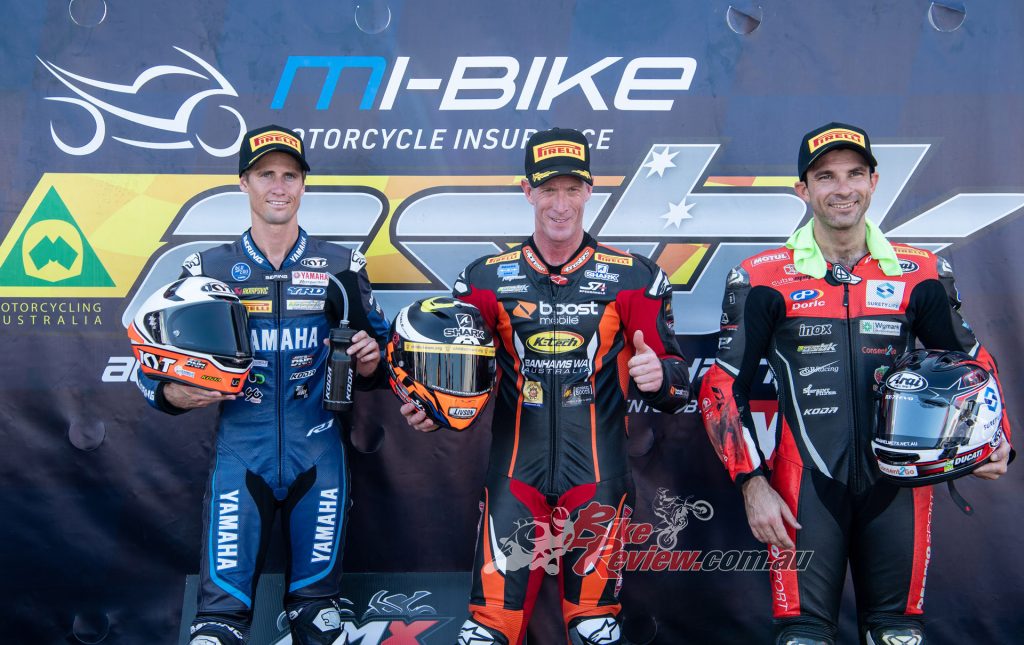 Wayne Maxwell took pole position at Hidden Valley Raceway for round four of the 2022 ASBK championship.

Mike Jones did enough in Q1 to ensure he would be there for Q2, whereas Wayne Maxwell did a Wayne Maxwell and of course topped the sheets when that was not required. But when it really mattered in the second qualifying session, Jones got down to business and hit a 1:05.411 that he followed a while later with a 1:05.333 and then a fastest-for the-weekend 1:05.213.

While it wasn’t into the 1:04s that various pundits had predicted, the feeling in the paddock was that Maxwell would need to keep it together and his early qualifying laps- that included a short off circuit excursion- indicated that perhaps the reigning champion would not be able to have a solid dip in the last few minutes. 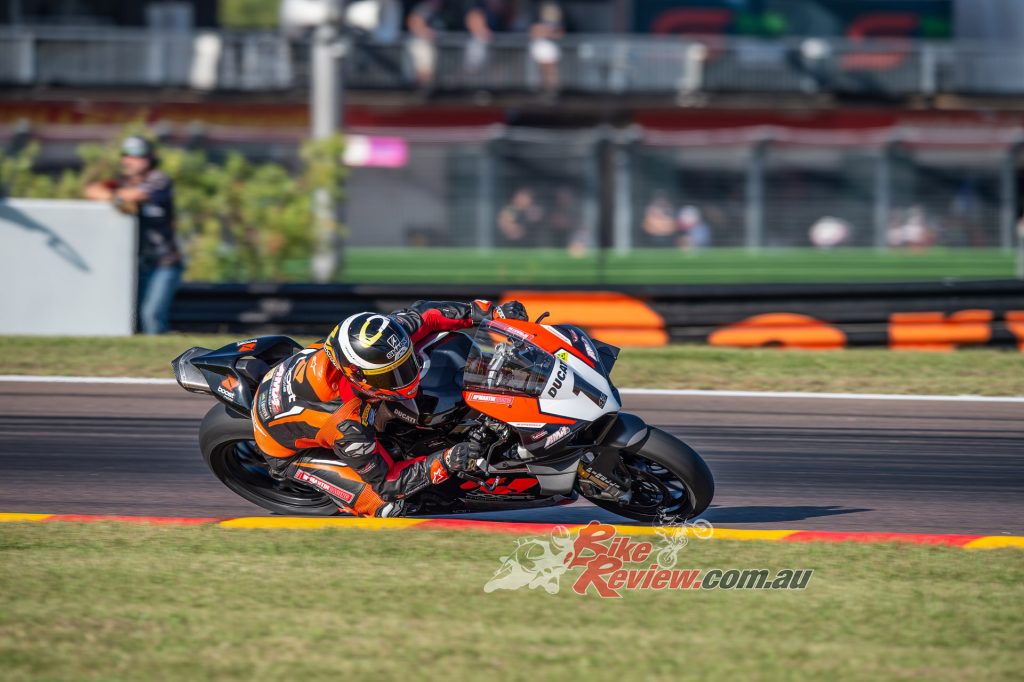 And then everyone else had a dip. With a few minutes to go a glance at the timing monitors was eye popping as a multitude of riders mid-lap were dipping into the fastest lap, lap record and personal best territory. As has been often the case, the longest and hardest sector- three- would be the undoing of many …except for Wayne Maxwell, who just pushed through to take not only the pole position, but get into the 1:04s, the qualifying record time and – but for Mike Jones’ emphatic race simulation times on Friday- warm favouritism for the opening race. 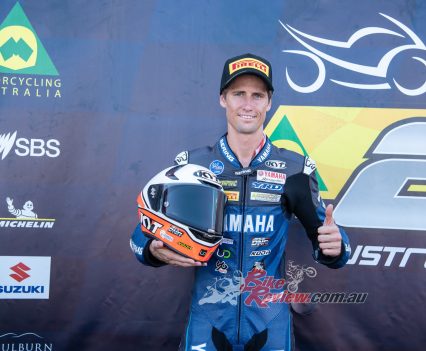 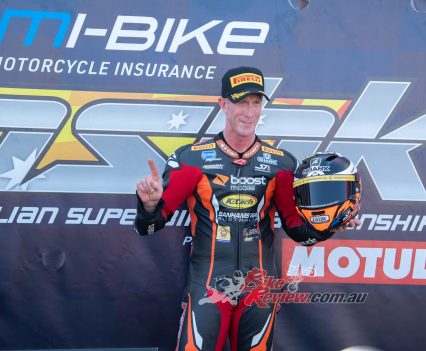 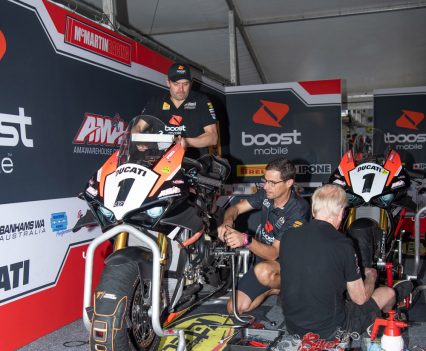 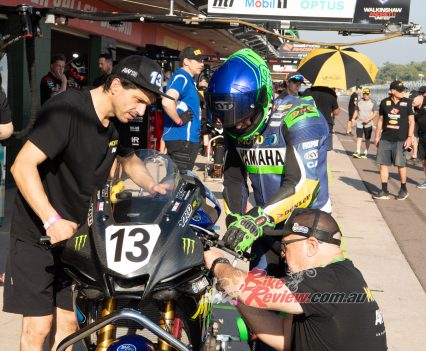 One could not ignore the achievement of Troy Herfoss fighting his way out- not only from sixth place on the grid- but out of a Darwin Hospital where he was 12 months ago to the day after his worst ever crash- a crash that many thought would see the end of his career. 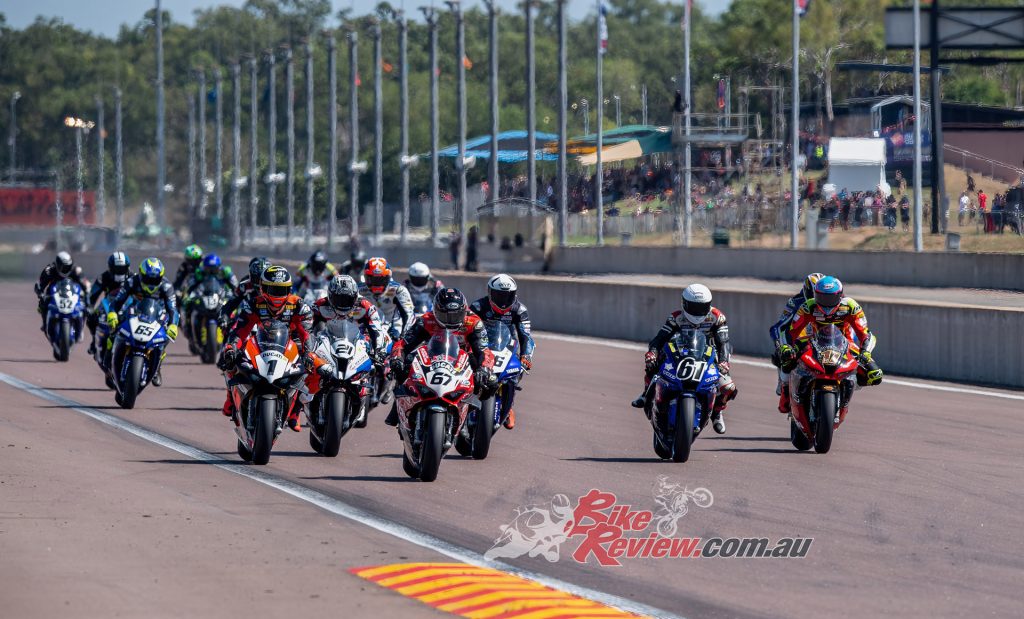 Troy Herfoss gave a legendary fightback after not only starting seventh but also returning to Darwin after a horrible crash last year that meant months of rehab.

That Mike Jones was out front reeling off lap after consistent lap was impressive- and frankly might be the start of a critical and definitive run to the 2022 Championship- but it was hard to get past not only the Herfoss result, but also the battle that he and Bryan Staring had to get to the line.

The race started off at the expected frenetic pace with the magnificent DesmoSport Ducati in its one-off indigenous livery, firing off the line from third into first for turn one. Bryan Staring wisely didn’t go too deep into the opening turn and that spooked then-second placed Arthur Sissis who had also had a huge start from seventh. 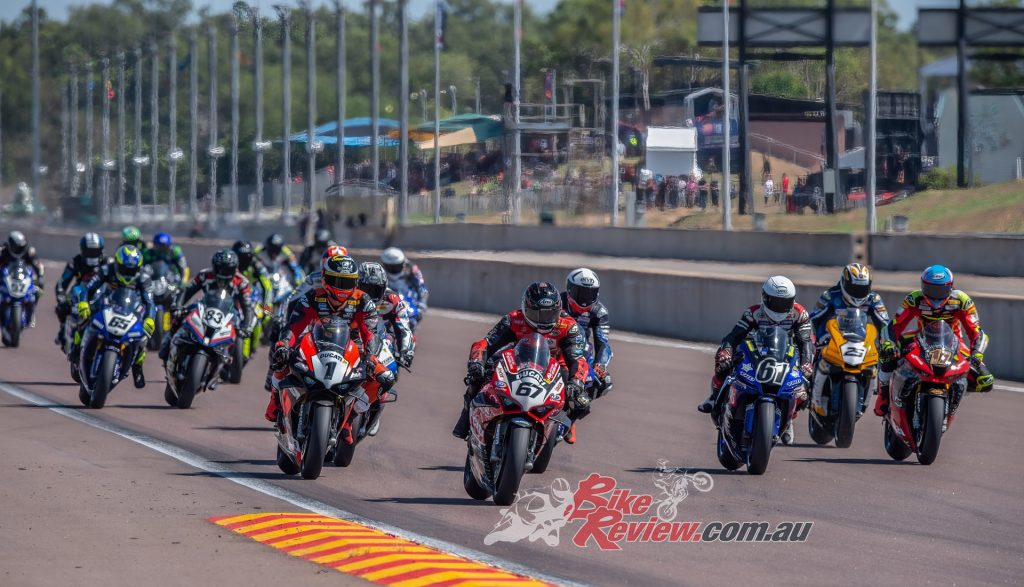 Maxwell, Waters, Staring, Jones, Sissis, Herfos and Falzon into turn one off the start of race one, round four, ASBK.

After leading for five laps, Staring found himself second to the number 46 Yamaha after Mike Jones decided that he had the pace and tyres to go to the line. As soon as he hit the lead, Jones focused on smooth, consistent laps and eked out a small, but noticeable gap. 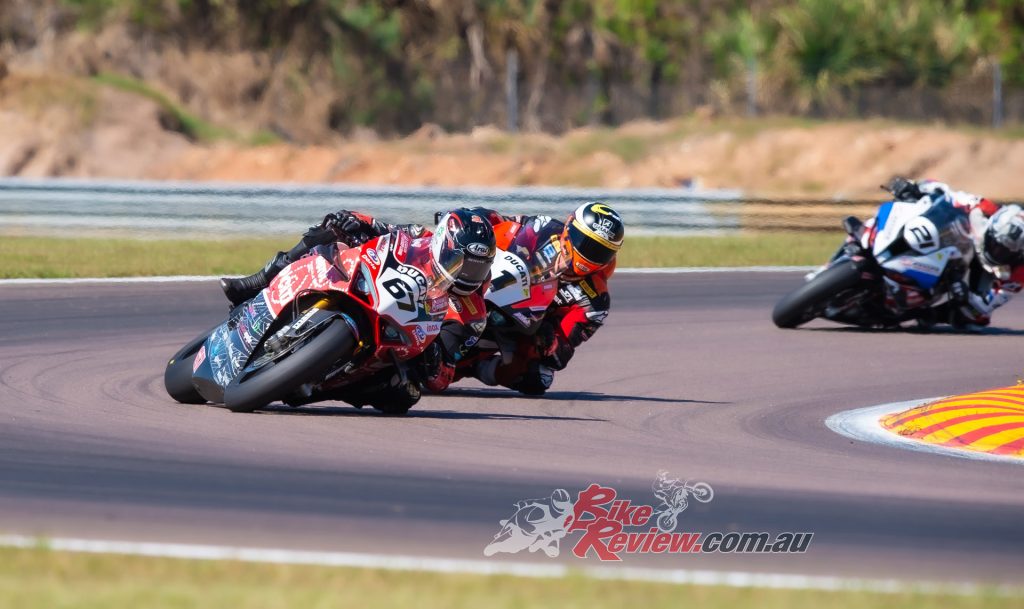 Staring led for around five laps before Maxwell and Jones started to gain on him. Waters was right there so close.

While it was not immediately obvious to anyone off track, early in the race, 2021 Champion Wayne Maxwell was in trouble. His electronics were not on song, and he was losing power and drive in places where there was no need to drop power. Riders around him pounced as the big Ducati popped and burped its way around the Hidden Valley layout. Fourth in race one was a good outcome given the circumstances. 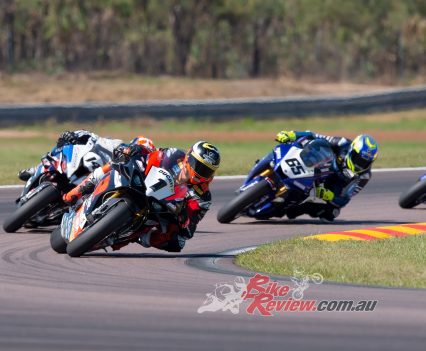 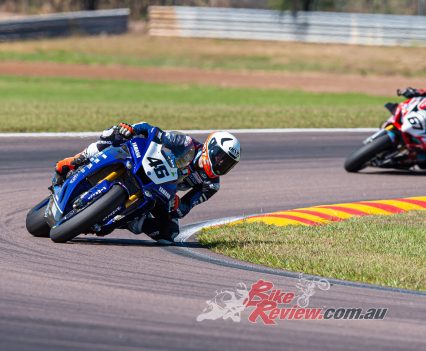 Glenn Allerton had been relegated from eight to tenth after a track limits breach in qualifying and apparently that situation had fired him up as he took the BMW M 1000 RR from tenth to fourth. In his 100th ASBK round, Allerton was not in the mood for a mid-pack finish.

In his 100th ASBK round, Allerton was not in the mood for a mid-pack finish…

Glenn found himself in a group that were all looking to work their way back into podium contention and while he was unable to get by Maxwell, fifth on the day was a good outcome on a weekend where the Maxima Oils Racing Team appear to be making significant steps forward. 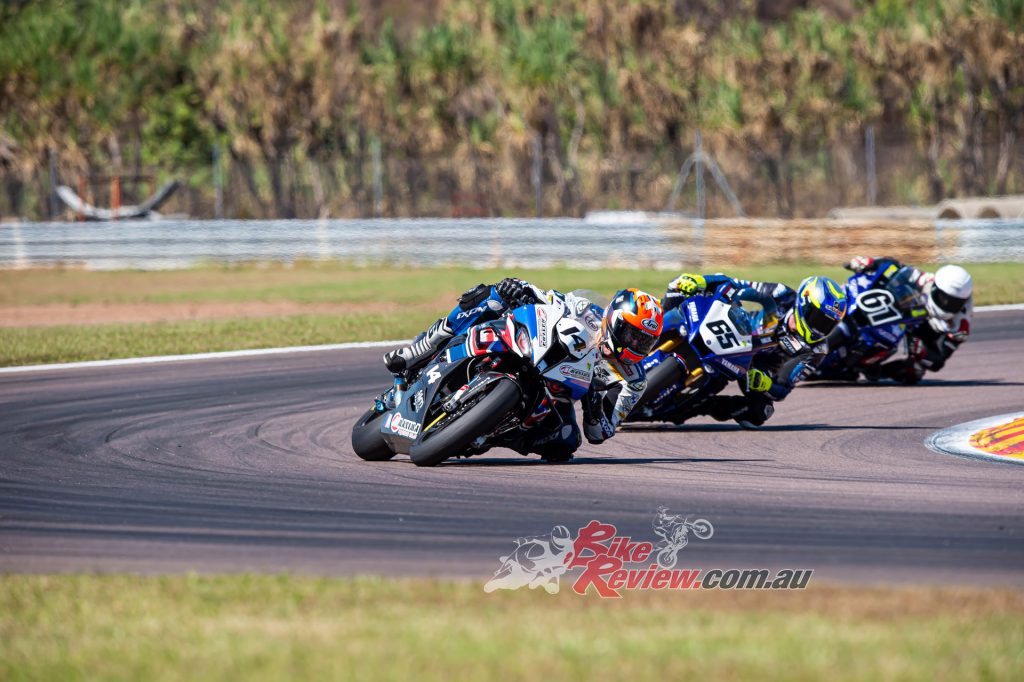 Allerton was on a mission from tenth on the grid (after a track limits penalty). In his 100th ASBK race he was on fire!

Allerton’s teammate Josh Waters also had a great start but some timing glitches with his transponder made it difficult to establish just exactly how he was going. For all the issues with his timing, he did in fact nail the fastest lap of the race with a 1:05.499 and after a difficult Friday eighth was not what he wanted, but there are good signs for the rest of his weekend. 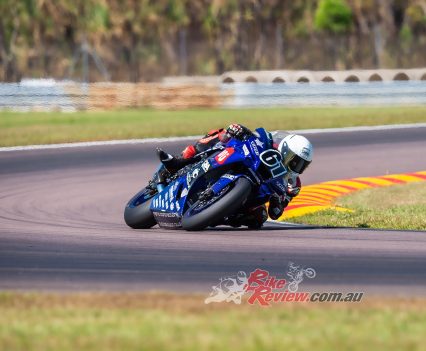 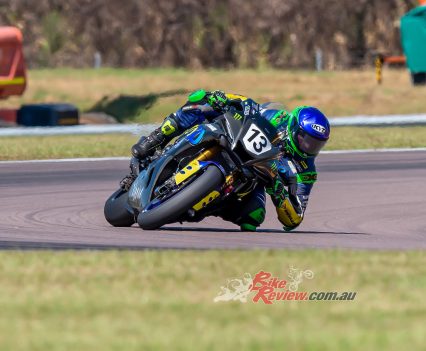 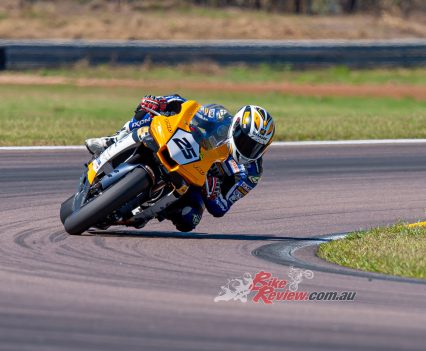 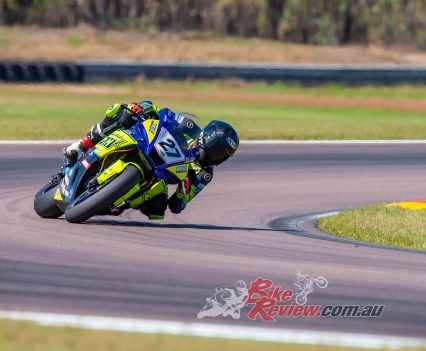 Cru Halliday had a poor start and went from sixth to eighth. While he would work his way past a few riders, on the day the best he could manage was a return to sixth by the checkered flag. 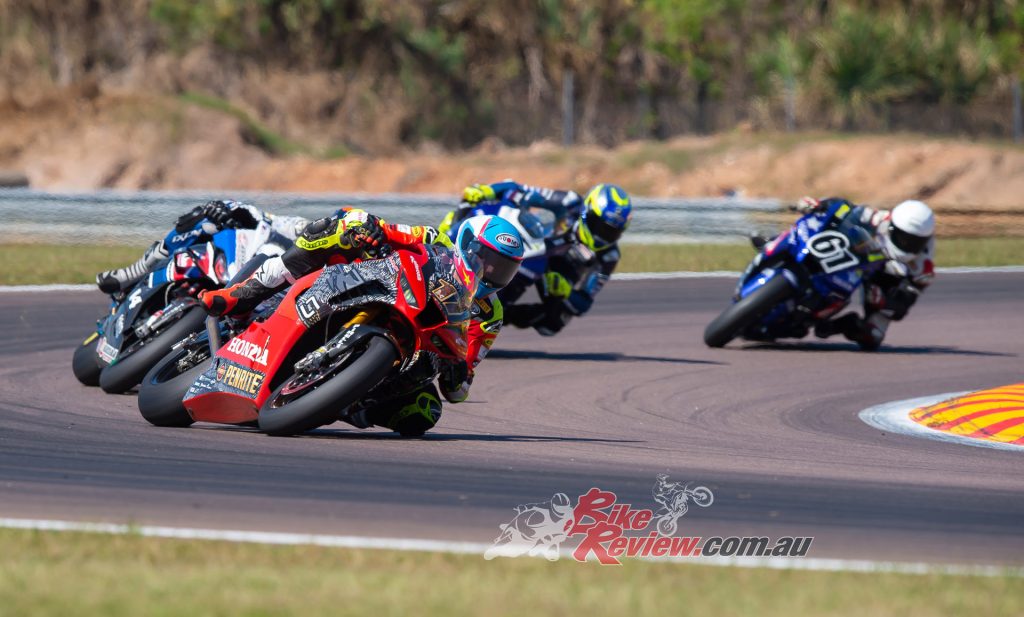 For the leading group, it was all panning out to Mike Jones’ liking as he stretched his lead a little each lap. Herfoss had passed Maxwell and while you could not see his face, the attitude of the Honda and Herfoss’ body language showed he was absolutely looking to bridge the multi second gap to Staring. 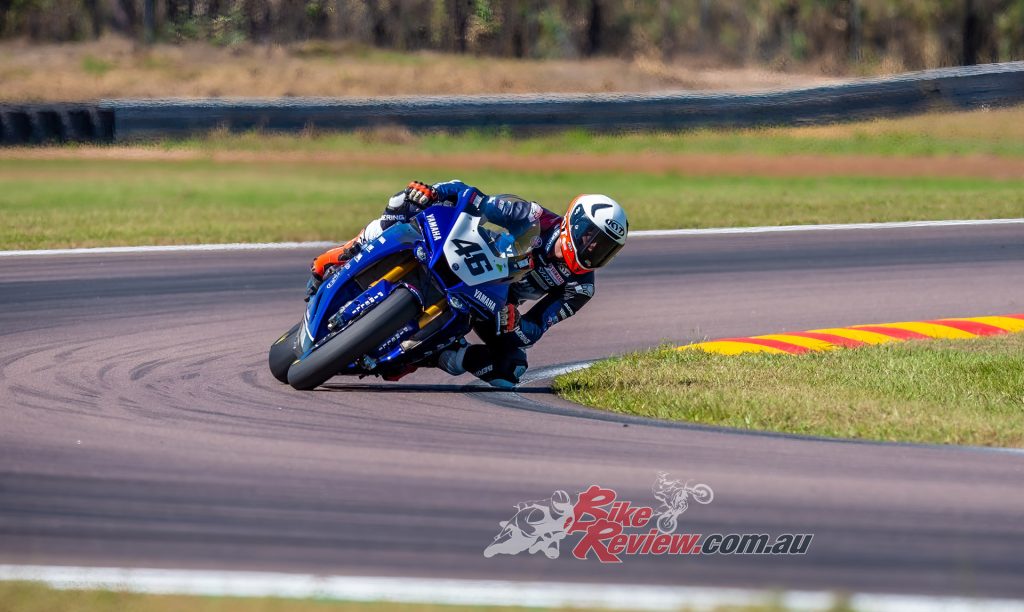 And he did. With just two laps left, Herfoss arrived for what would be the battle of the day. With respect for each other, but a championship and the day’s honours to battle for, they traded positions multiple times and nearly sent themselves off track on the last lap. It was nail biting, exciting and brilliant dicing with Herfoss coming out the winner- albeit for second place on the day. 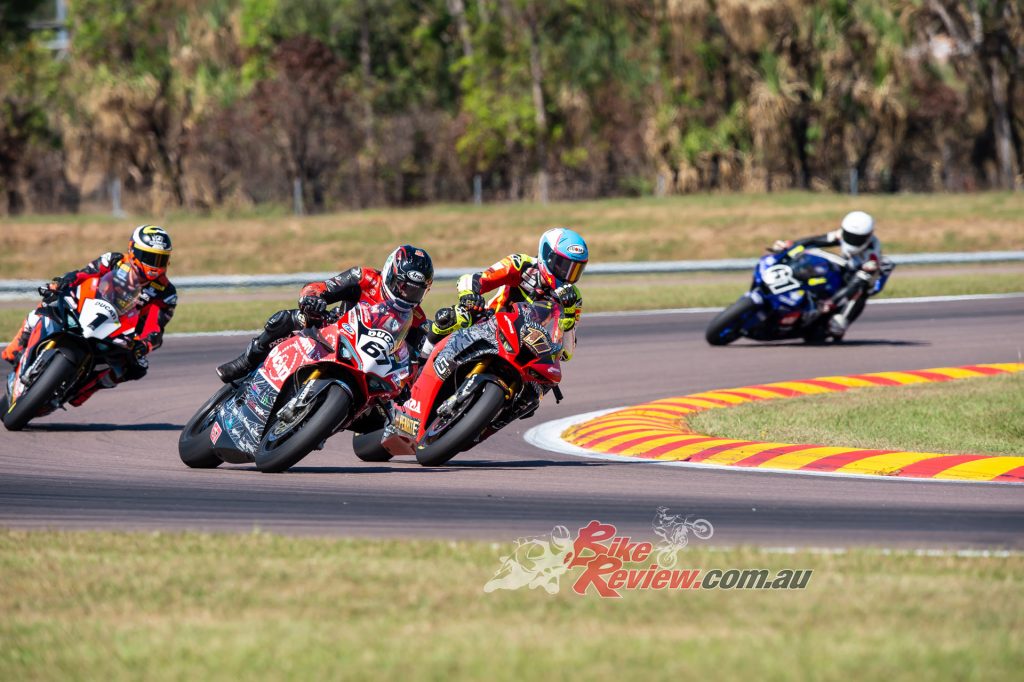 Staring and Herfoss traded placers multiple times in the final laps. It was the battle of the race and fantastic!

While the Staring/Herfoss fight was holding the attention of the TV directors and fans, Jones quietly took the Championship by the scruff of the neck as he took race one. He might have missed the bonus point for pole, but the 25 points for the win was ample compensation. With nominal non-title contender Herfoss second, the stretch in Jones’ Championship points lead over Maxwell and Staring was an added bonus. 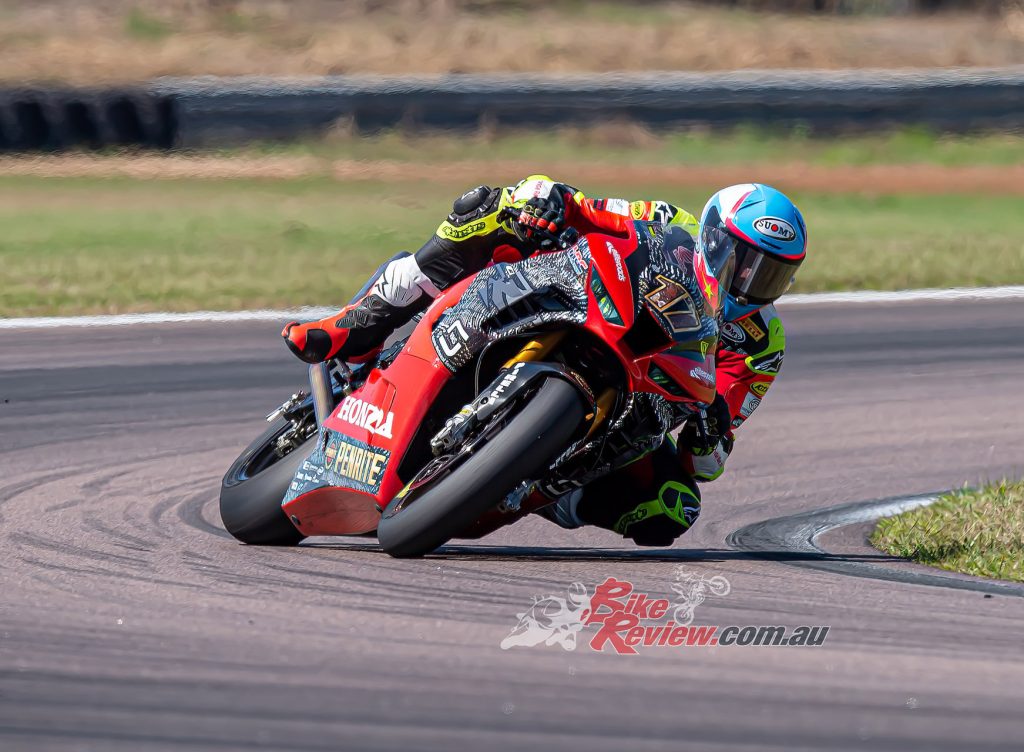 Full Race One results can be found here…