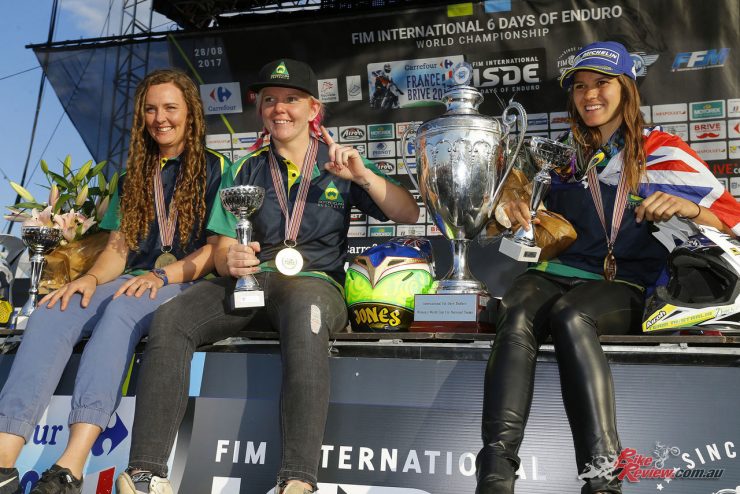 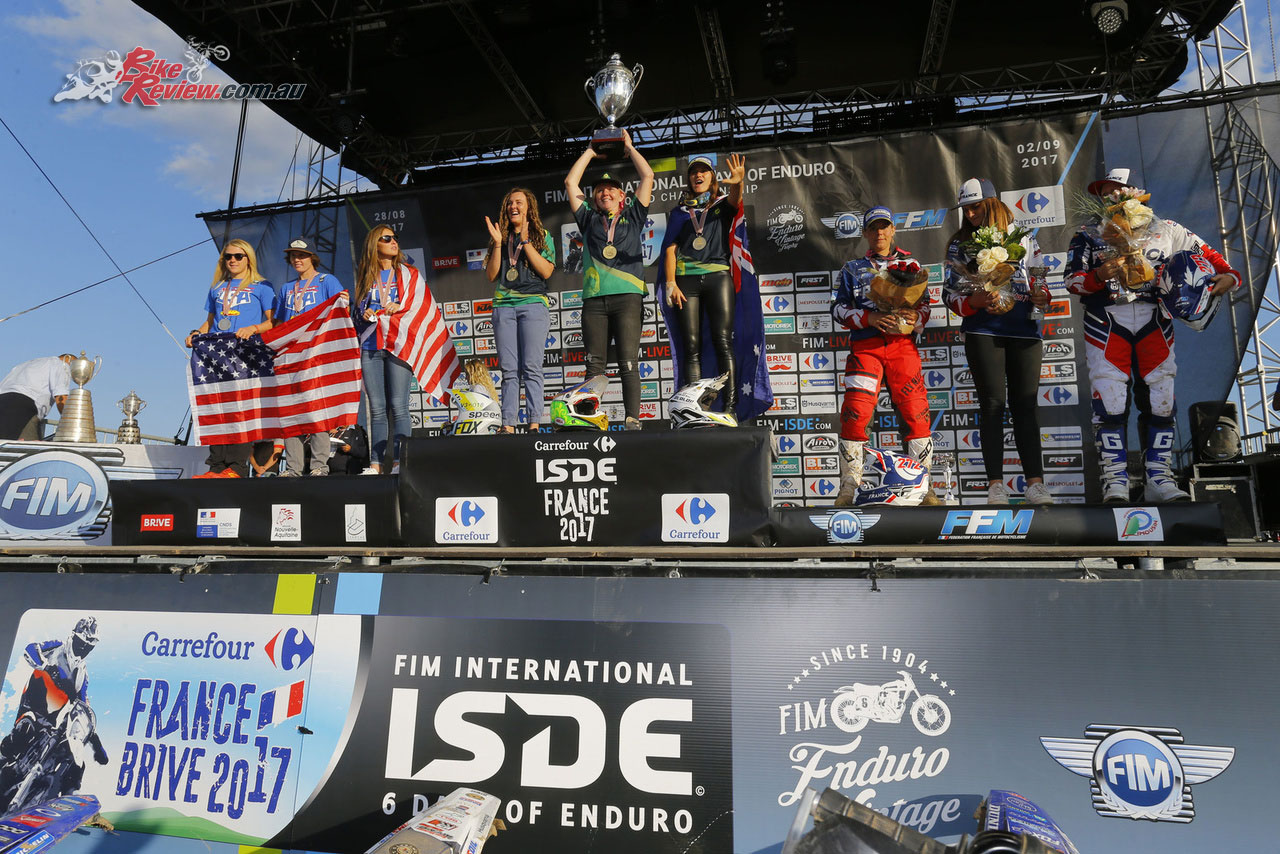 The Team is spearheaded by three of the finest women Off-Road riders the world has seen. Tayla Jones, Jessica Gardiner and Jemma Wilson, have secured their place in ISDE history with a stellar performance. Jones finishing overall second, Gardiner in fourth and Wilson in seventh.

In what was a glorious day in Brive, the Womens Wold Trophy team raced around a purpose built motocross style track, completing five laps taking two minutes each. The day started in wet conditions before the sun eventually broke through clouds, which allowed for a spectacular track and perfect weather, for what was a mega crowd for the Final Moto. 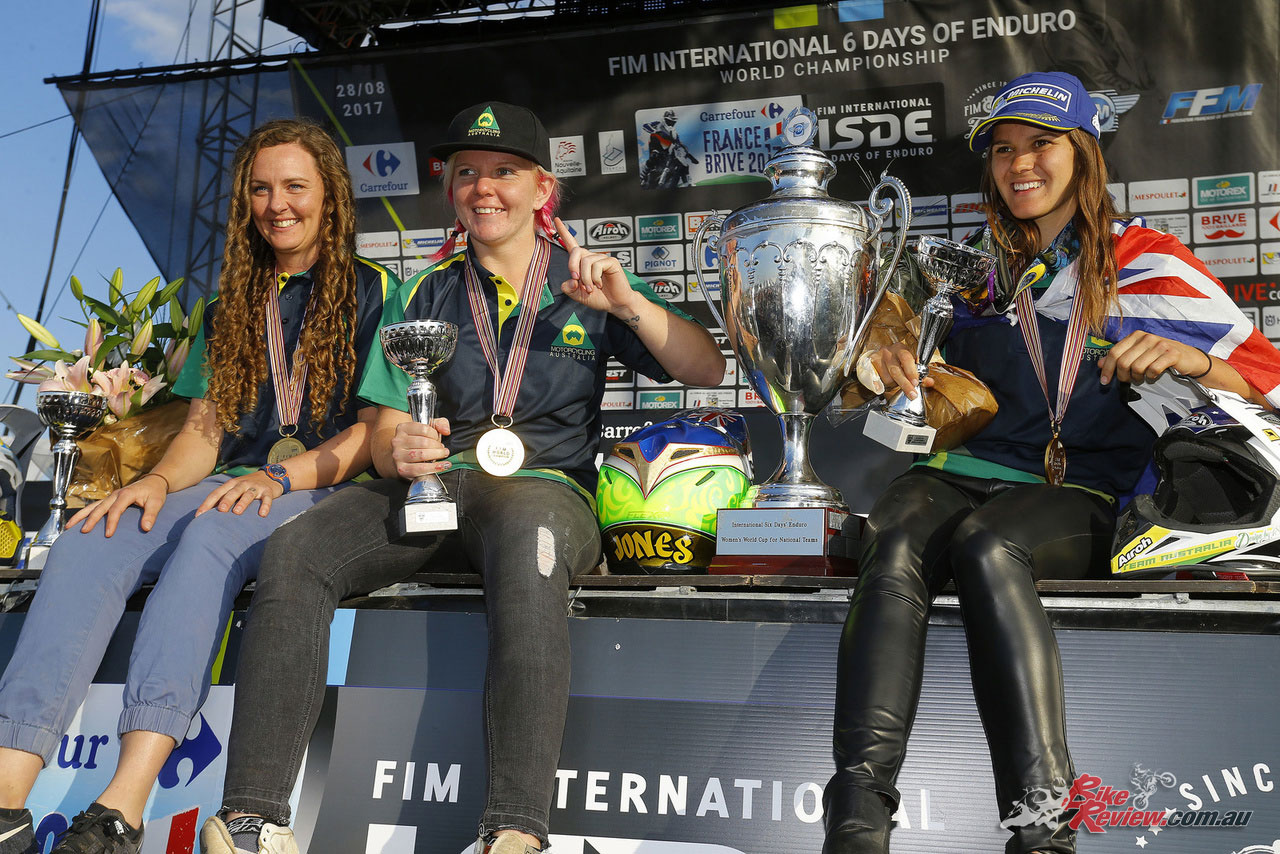 Once again, Tayla Jones was engaged in a battle with Spain’s Laia Sanz to be the fastest Womens Enduro Rider in the world. However, it would be Laia to get the hole shot and lead the way, relegating Jones to third, Gardiner in fifth, followed very closely by Wilson in sixth for the day. Jones would still lead her team to an incredible fifth consecutive title, despite coming second overall.

This will be Jemma Wilson’s final year representing her country as she goes out on a high note as an historic five time World Champion. As a result, 2017 will sadly mark the last time we see this unbelievable trio competing together again. 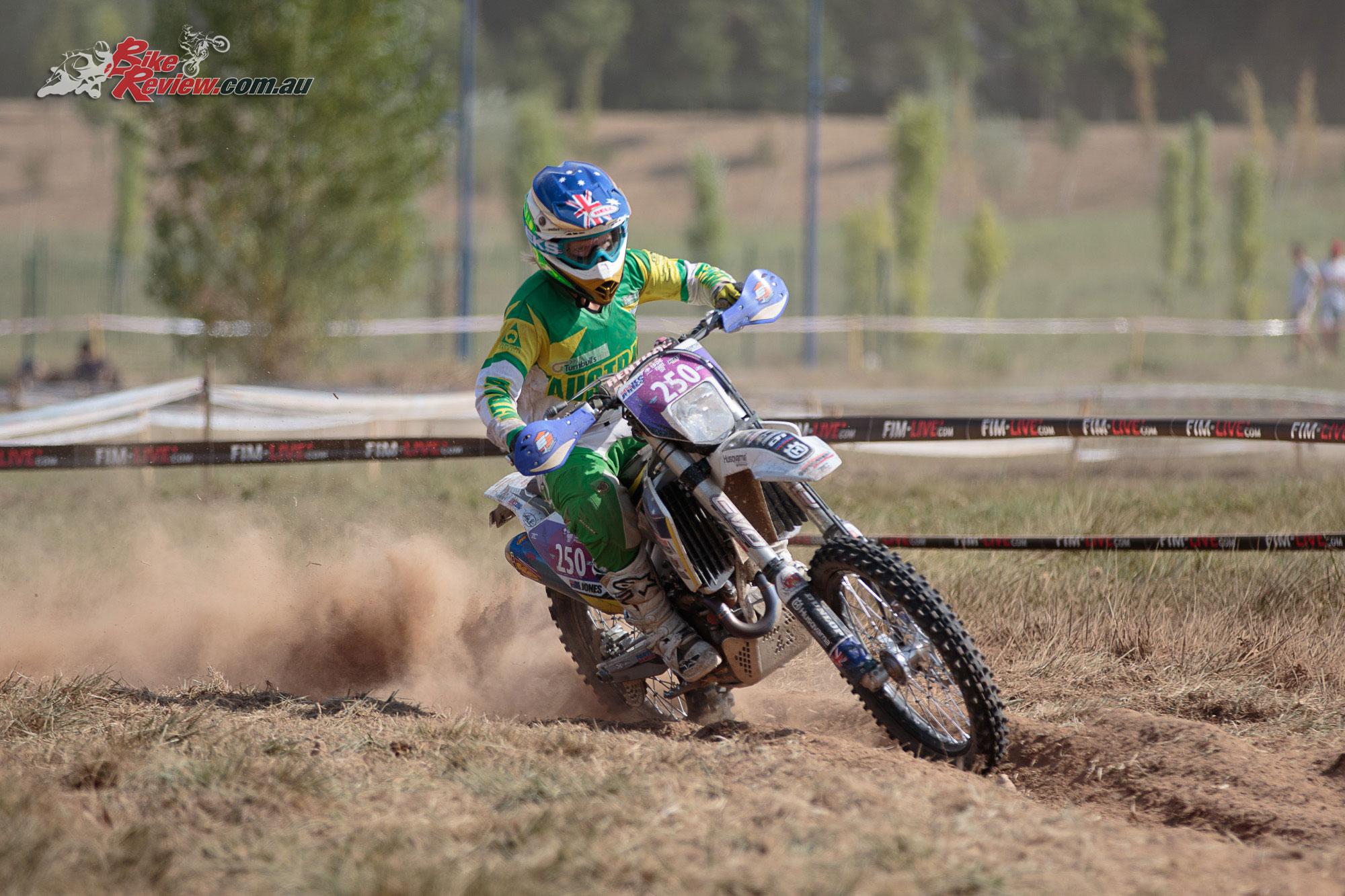 Tayla Jones saying, “We had a good day for Day Six on the Final Moto and I had a lot of fun. We came out on top once again for our fifth title in a row! It’s an awesome feeling to be Champions once again. It’s been a great time over here with all the success we have had together. I want to thank the entire Australian Team, who have been there to support us throughout the event. I also want to thank mechanics for coming over and helping out this year.” 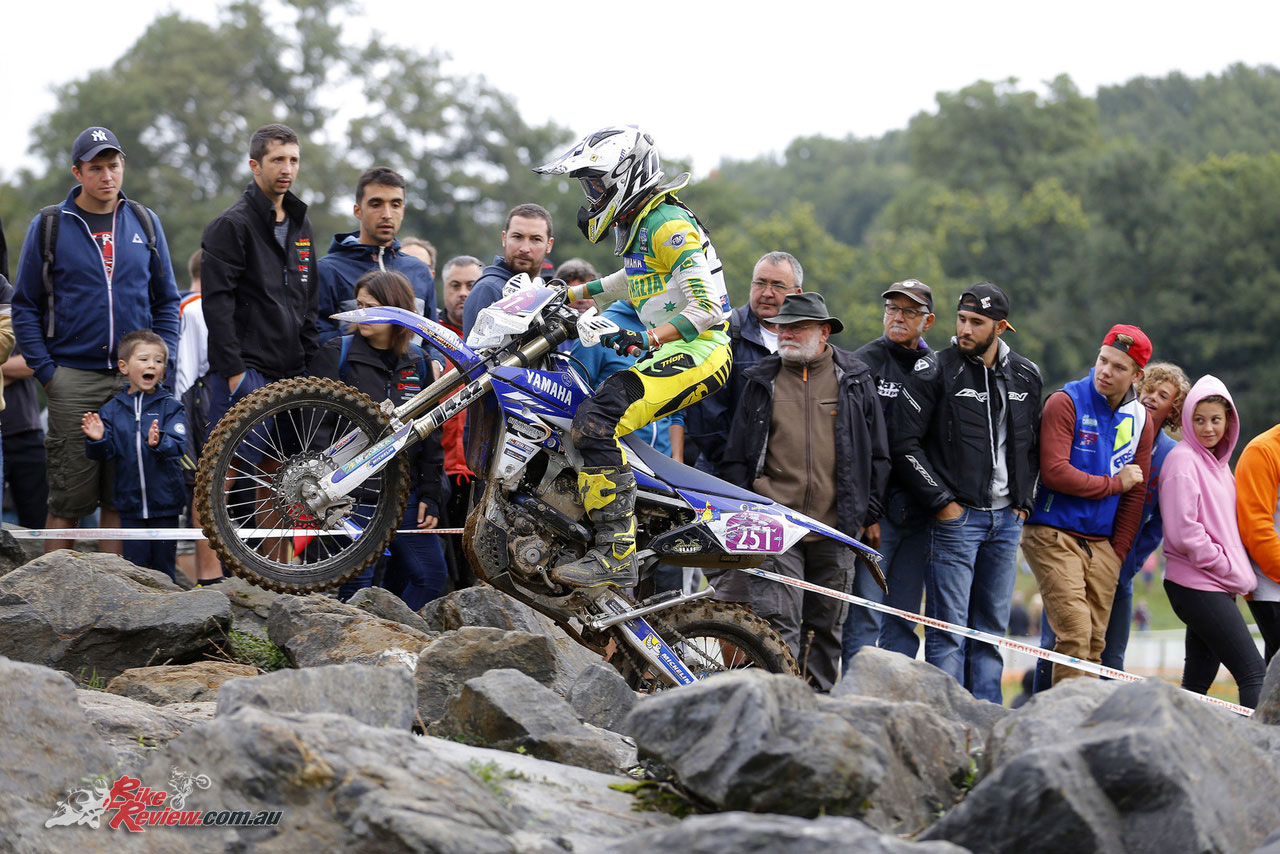 Jess Gardiner adding, “I’m very happy to see that finish line after the injury to my hand! Its been a tough week with the pain. I am really stoked to be five times World Champions with Tayla and Jemma. Its been us as a team the whole way through. It wasn’t a bad Final Moto, I didn’t have the best start and unfortunately I went down at one point. I’m just happy to be a part of it all and I would personally like to than Team Australia for all their assistance. We have supporters and volunteers left right and centre. From helping us at the controls, to packing up the bikes, it’s a large effort. The locals have also been very kind and me throughout the tests. I would also like the medical crew for all their help. Finally, I would like to thank my boyfriend, Mathias Bellino. 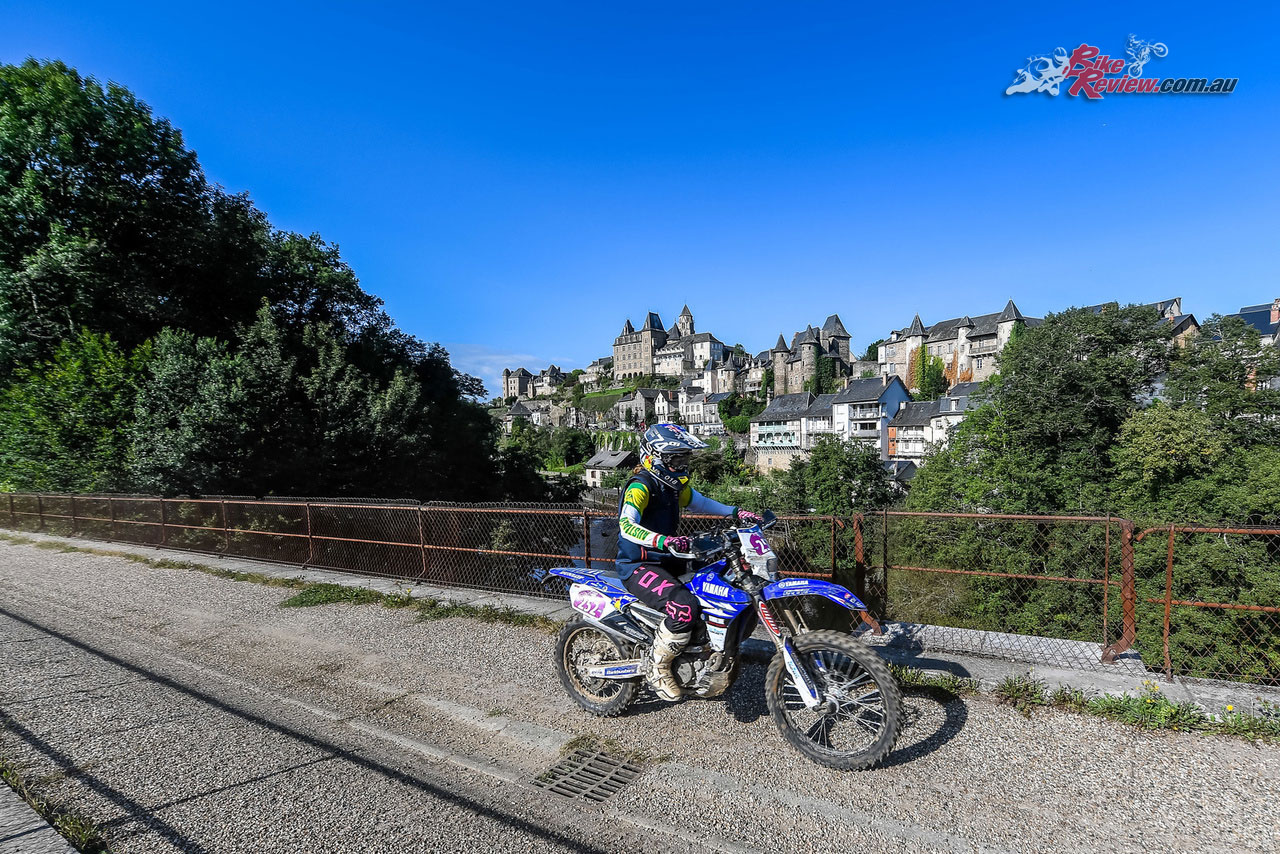 Jemma Wilson concluding, “Another Six Days done, that’s seven for me and now a five-time Champion! My week started off pretty steady and I got better as the event went on. I ended up seventh for the ISDE, Jones and Tayla were both incredible. The Final Moto was awesome and its great to finish the even on a Yamaha. I decided throughout the week that this will be my final ISDE, in a way it’s sad but also exciting to see who will be the new team member and write their own story.”

Motorcycling Australia congratulated the Australian ISDE competitors on their efforts this year. They thanked everyone involved but in particular Team Manager, Don Atinks for his efforts as well as Jury Member, Chris Gray and Mechanics Trent Lean, AJ Roberts and Alex Bolton. Physio, Jess Smith was also a significant contributor to the success of the team.