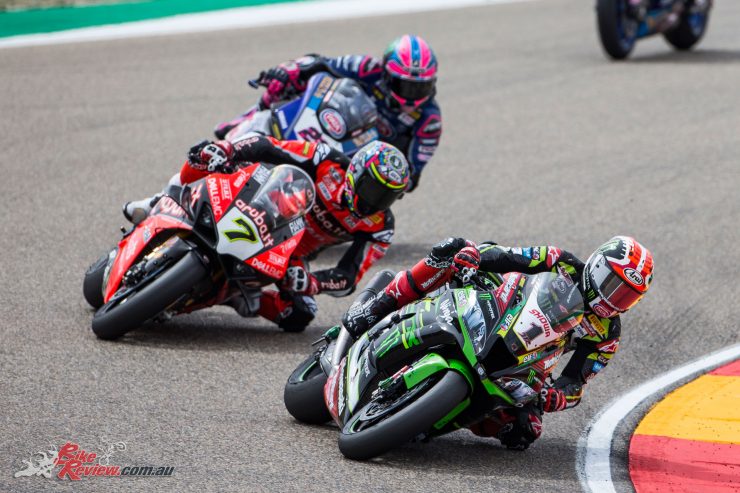 Bautista has taken his seventh win of the season at the opening race in Aragon, as his dominant form continues, with Jonathan Rea claiming second, and Ducati team mate Chaz Davies claiming the final spot on the podium.

Bautista got a dream start, blasting clear into the lead by Turn 1. However, there was drama behind as Jonathan Rea and Markus Reiterberger collided on the line, leaving the German rider on the floor in the middle of the pack. He was able to get up, but his race was certainly over. 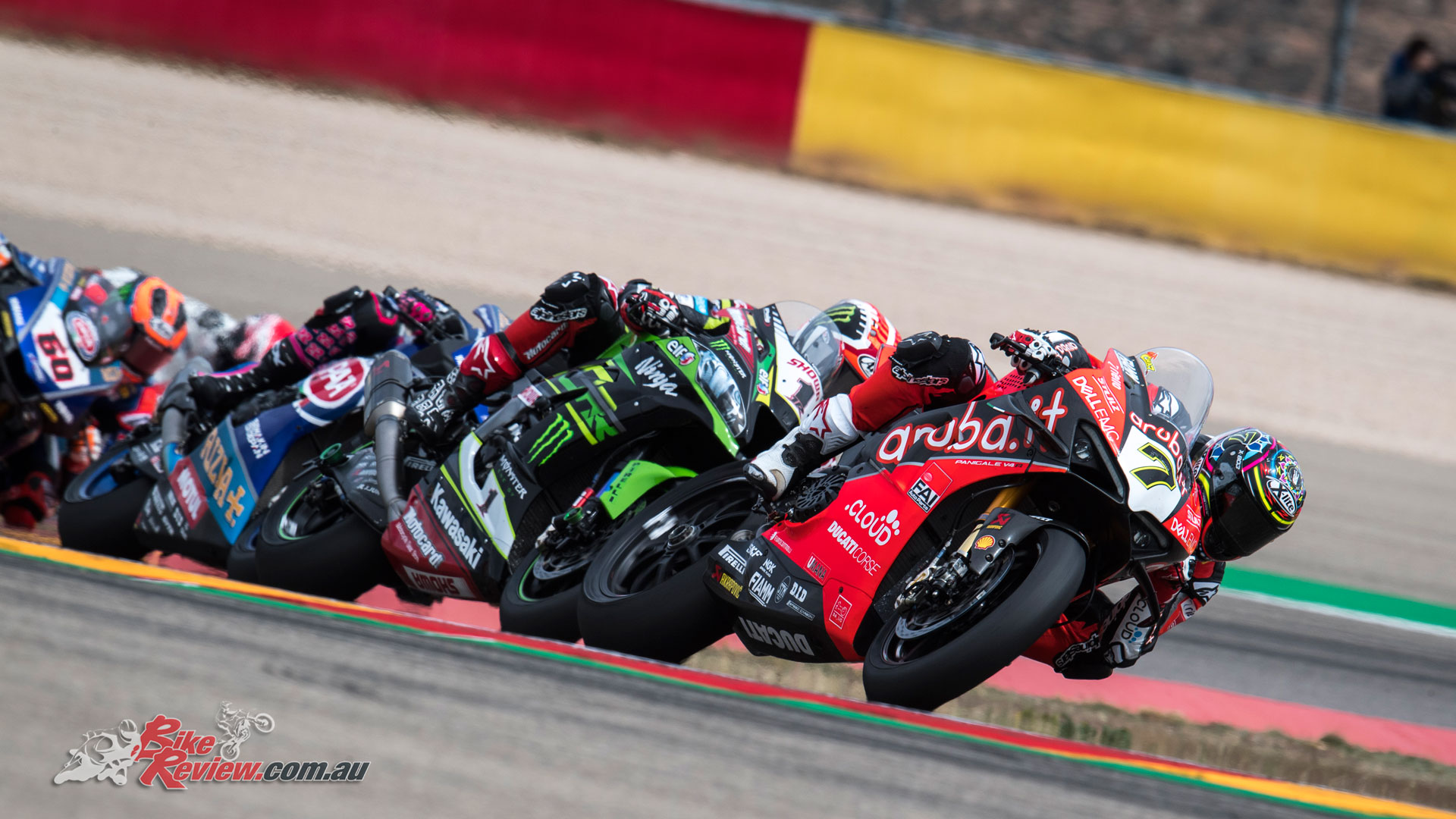 Tom Sykes was able to give some positivity to the German manufacturer, as he got into second position, ahead of Alex Lowes. There was more carnage on the opening lap, as Leandro ‘Tati’ Mercado and Alessandro Delbianco crashed at Turn 12.

Chaz Davies was moving up the order very quickly, into fourth by Lap 2, racing up from eighth on the grid. Jonathan Rea had also made a great start, up to fifth position, whilst the rider who had suffered the most in the opening laps was German, Sandro Cortese, who was now down to seventh as Michael van der Mark moved through on his Yamaha compatriot. 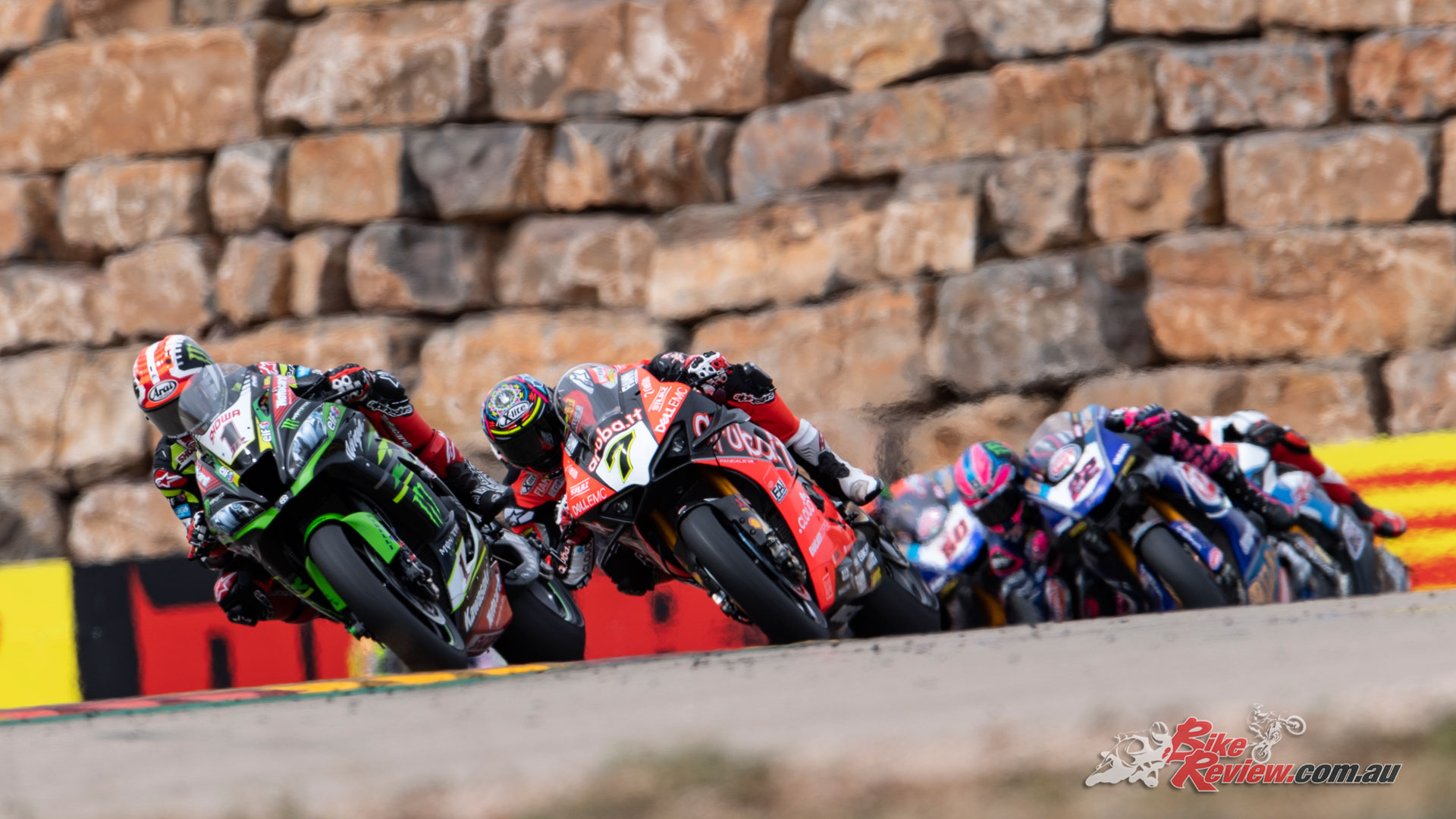 As the race progressed, a mistake from Alex Lowes at the final corner allowed Jonathan Rea and Tom Sykes to come through, whilst Chaz Davies also got in on the action. Four riders, representing four manufacturers, side-by-side down the straight for second position. Meanwhile, way out in the lead, Bautista achieved a new lap record, with 1’49.755 cementing his position as the rider to beat in WorldSBK.

Tom Sykes soon dropped back behind the main protagonists but Eugene Laverty was right in the mix, picking up places and soon, was amongst the leading group. The Irishman made it into fifth position in the final third of the race, before also making a bold move with three laps to go on Lowes at Turn 12. The Irishman was now fourth and looking good for a podium.

Jonathan Rea was looking good for second place and continuously hounded Chaz Davies through Turns 3, 4 and 5. Rea led the battle going on to the final lap, with Davies all over the rear-end of the reigning four-time champion. 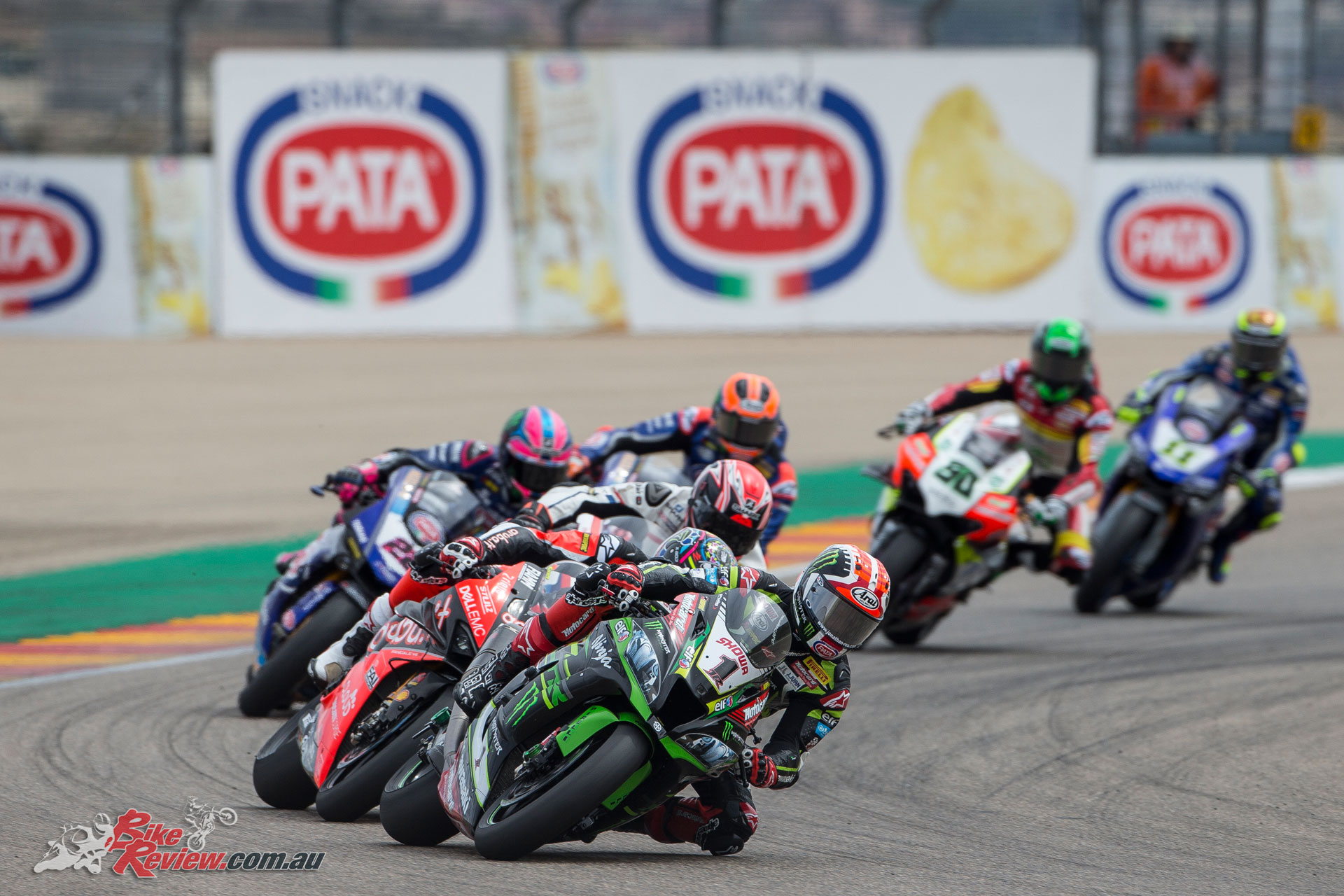 Eugene Laverty was able to make his way to the back of the duo, looking hard for a way ahead of Davies. Into Turn 14, Davies was lining Rea up for a move down the back straight before Eugene Laverty clipped him and crashed out. Davies stayed aboard but the damage had been done.

Completing the race without any such drama, Alvaro Bautista took a seventh win, whilst Jonathan Rea took a seventh second position and Chaz Davies in third place – his first podium of the 2019 season. 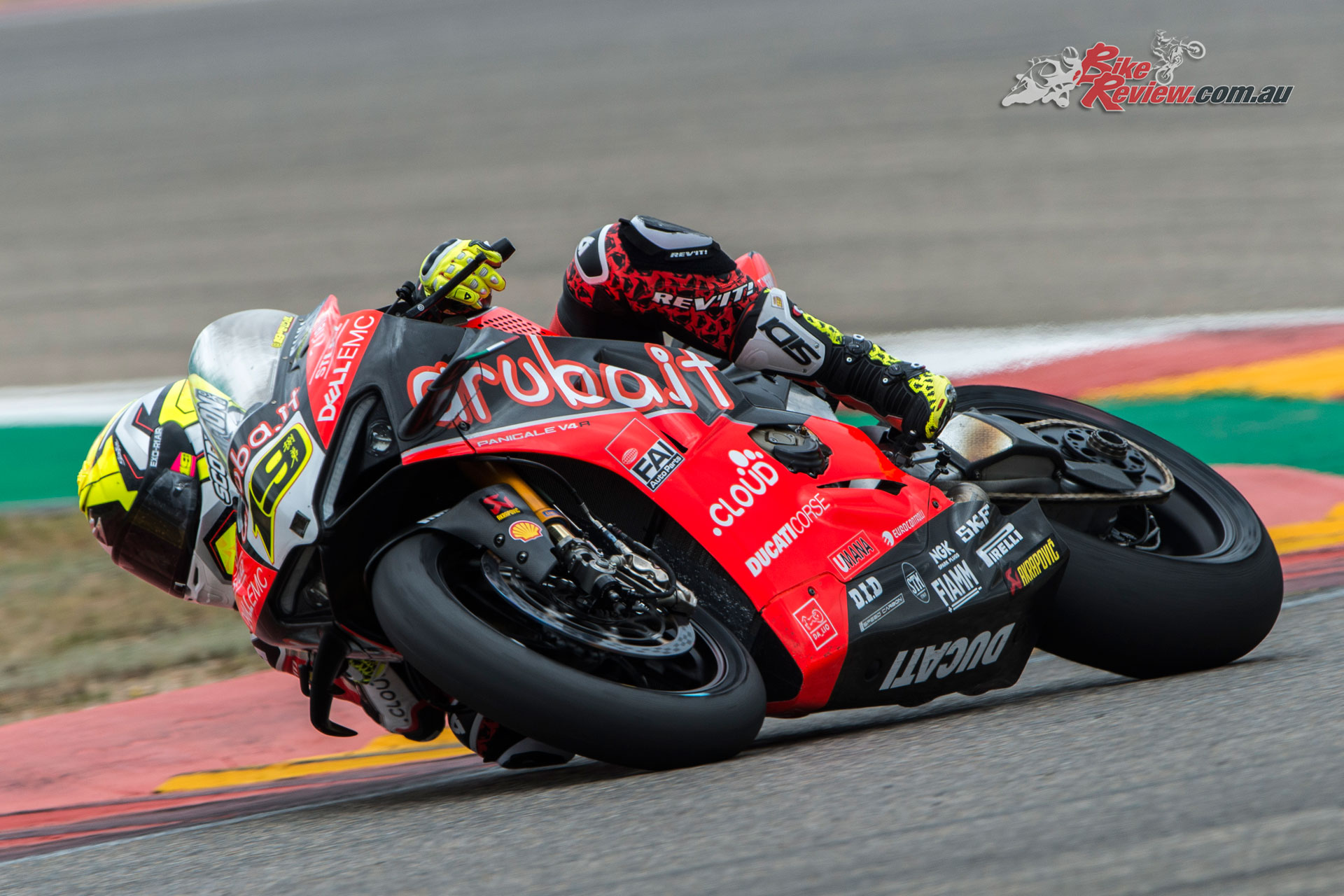 Álvaro Bautista saying, “It’s a fantastic feeling to win a race but to do it in your home race is even more special, and I’m so happy for all the Spanish fans. I tried from the beginning to set my pace and get some advantage from lap 1, trying not to lose concentration. Although I had a comfortable lead on the others, I really enjoyed myself a lot with the bike today, sliding into and exiting the corners but I was always focussed on my riding. At the end to win the race and become the first Spanish rider to win in Aragón is truly a dream, especially with all my family and friends here!” 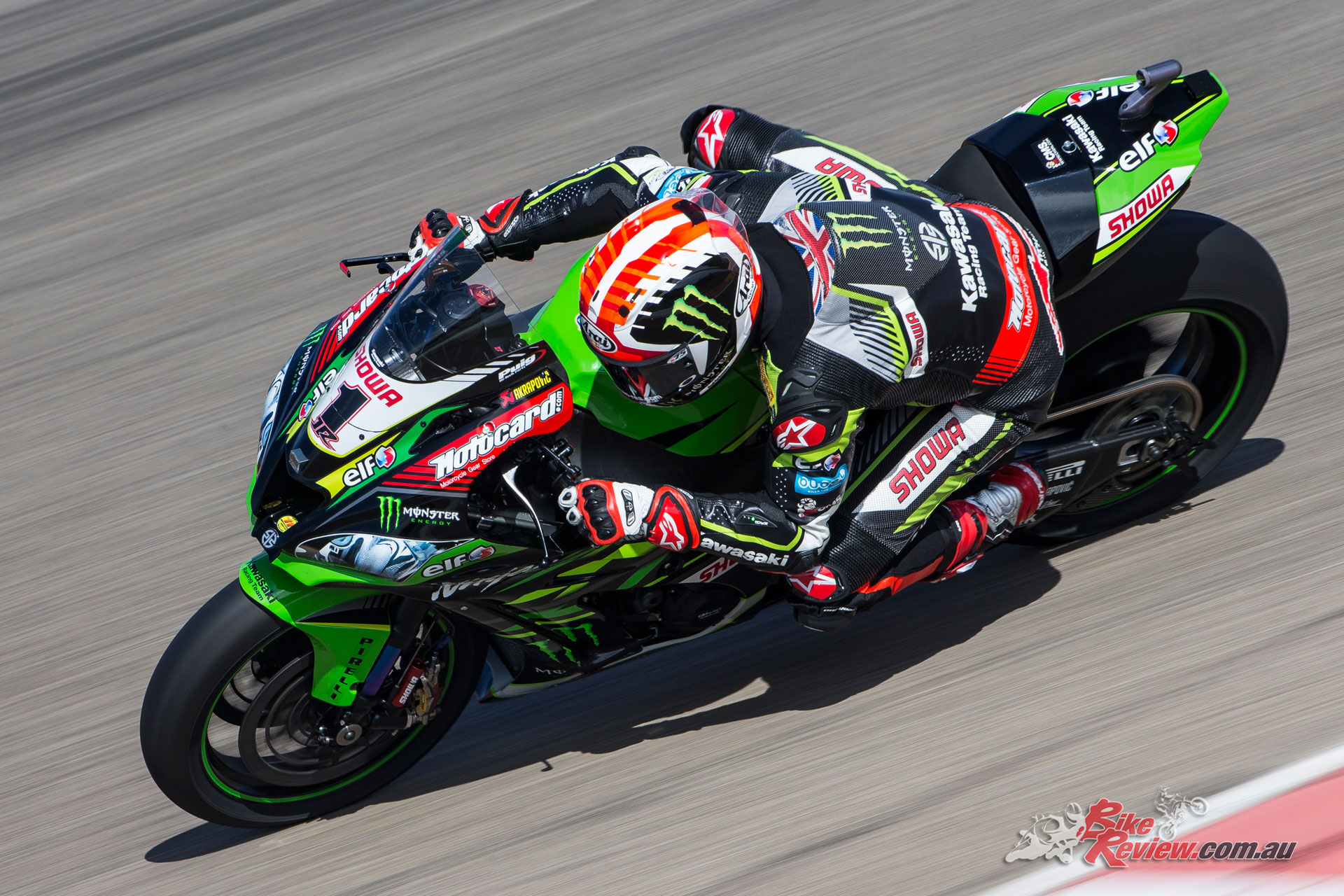 Jonathan Rea also sharing, “The race position today could not be any better and we achieved the maximum, even from tenth place on the grid. It was an eventful race for me and very exciting, with a lot of passes. All in all, we are very happy with the points and being on the podium, but still a little bit disappointed and bemused by the gap to the front, which is too big. In Superpole we made some mistakes as a team, both myself and the guys, from a time management side. We planned for two laps on the qualifying tyre but I was released a little bit too late then I made a mistake on my first lap and sat up in sector one, thinking to conserve the tyre for one last effort. But, when I came across the line, I realised my Superpole lap time was from the race tyre in the earlier laps.” 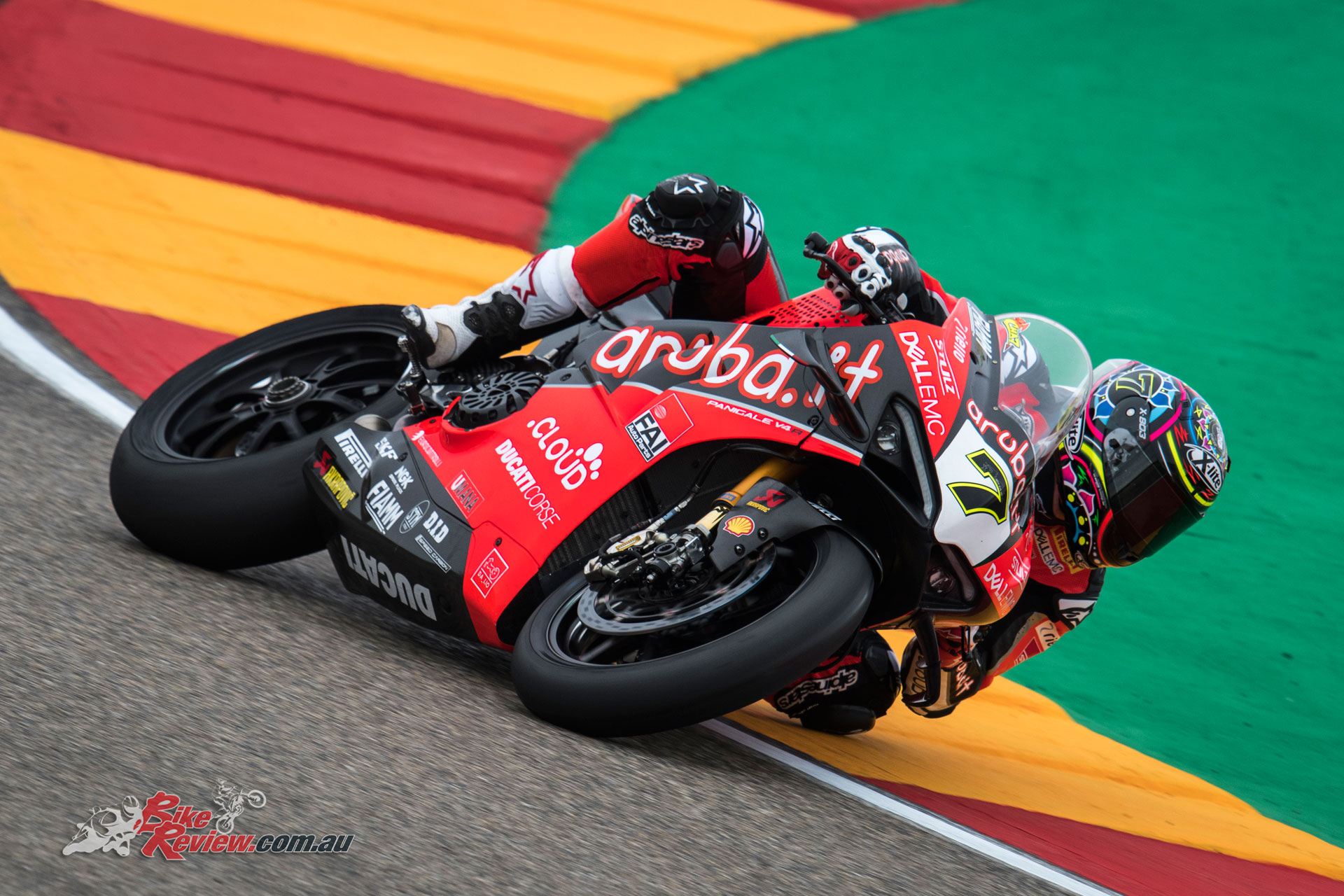 Chaz Davies adding, “I’m really satisfied with today’s result, more so for my team and my side of the garage than me, because they’ve been working so hard all through the winter. It’s not easy when things are not going so well, but we’re always working hard looking for answers and trying our best whether its tenth or here on the podium. I had a nice battle with Johnny and Alex, I really enjoyed it. It felt like I probably had better pace but I wasn’t able to get out of the group. I had a couple of issues at the end of the race that kept me out of the fight for second otherwise things were quite solid with the guys running for the podium this season.”

Laverty’s crash promoted Alex Lowes to fourth and a resurgent Tom Sykes, who picked off Cortese and van der Mark in the closing laps. 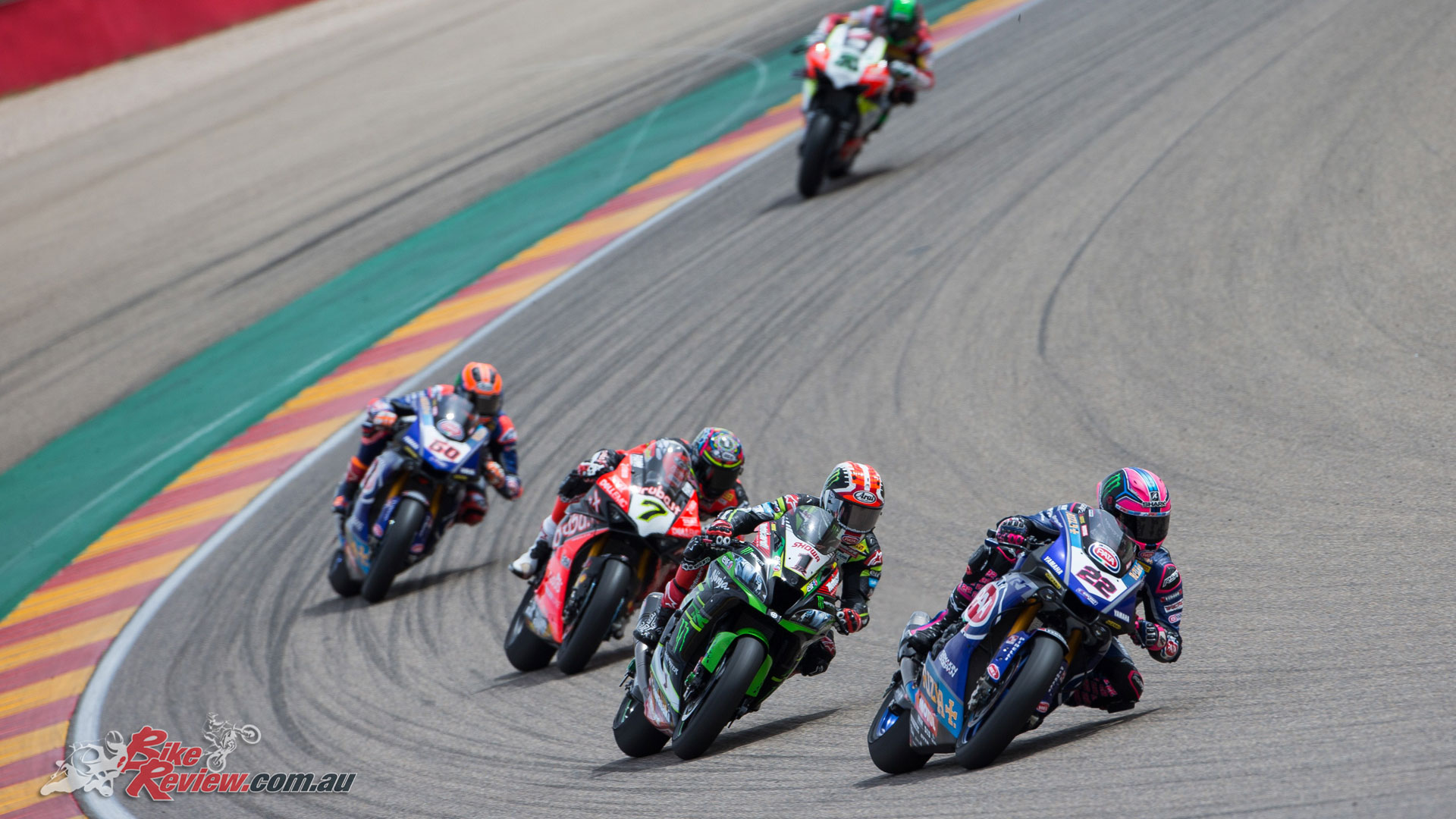 Alex Lowes saying, “It was a good battle today. It’s a shame it wasn’t at the front; there was someone a bit too far up the road, but I felt with six or seven laps to go I could hold on to second place. Even when Johnny Rea came past me, I still felt like I had the pace to fight back but then, with just three laps to go, there was a big drop in rear grip and I couldn’t keep the same pace. It was a little disappointing at the end of the race but, apart from that, I enjoyed it and it was good to get a strong race under our belt to give the guys some information, because with the cooler weather this morning we’ve not had too much consistent track conditions  this weekend. Now I’m looking forward to trying to improve the R1 a little bit more, ready for tomorrow.” 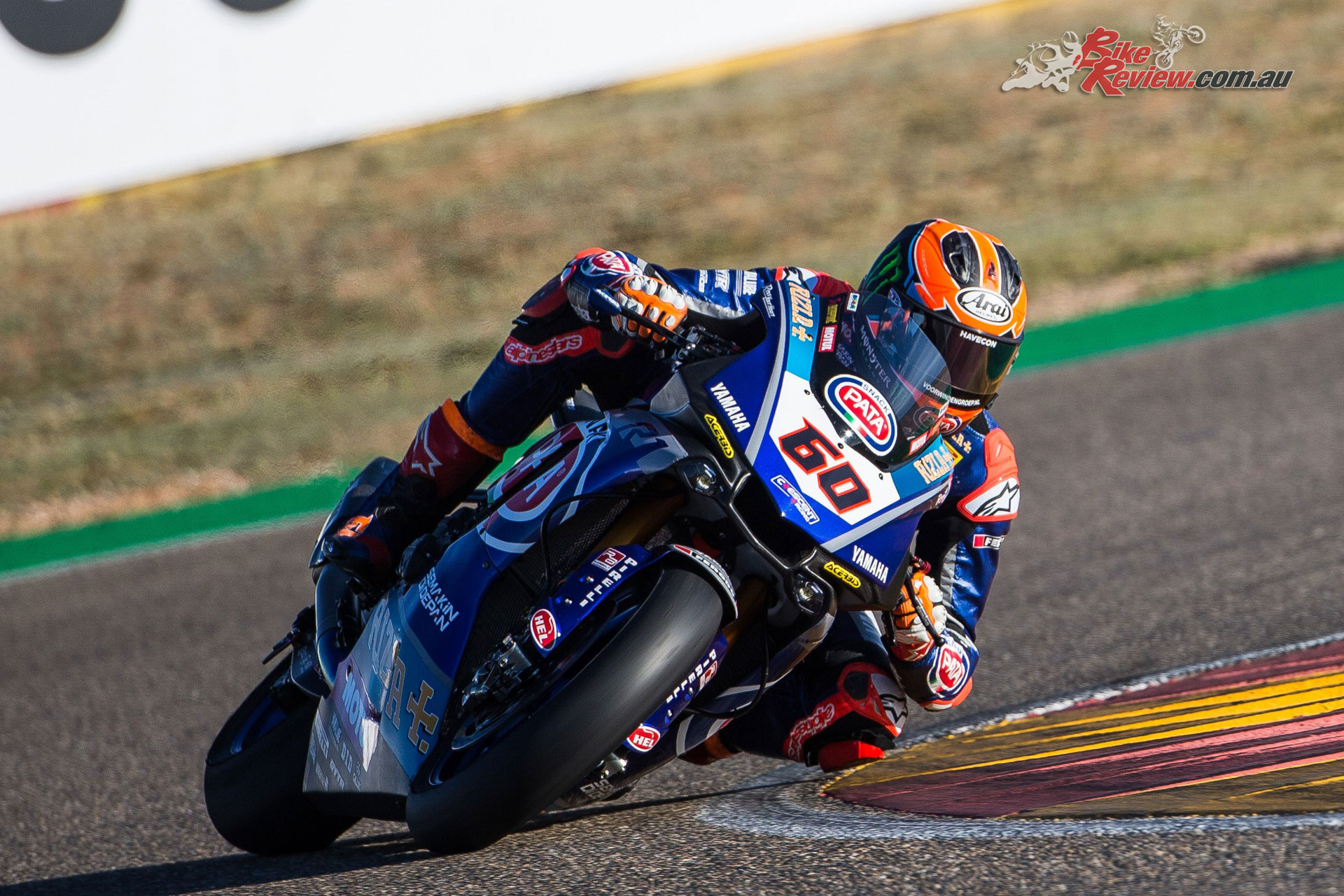 Michael van der Mark adding, “We made some changes to the bike this morning, but we still didn’t find the right setting for me and that impacted on my Superpole performance. For the race we decided to take a bit of a gamble with the set-up and, even on the way to the grid, I knew it was one that would pay off. I got a good start, but then Reiterberger crashed right in front of me and I hit something, so I lost a bit of time there. Right from the start I had a better feeling with the bike and my pace was much better, but I was struggling on corner entry, with the rear locking and sliding a bit too much. It meant I could stay with the guys battling for second in front of me, but it was difficult to find somewhere to put in a pass. I tried a few times, but as soon as the grip dropped then I was struggling even more on corner entry and couldn’t maintain the pace. I lost a position at the end, which is a shame, but the positive is that we made a massive step with the bike and we’re in a much better position now for the two races tomorrow.”

With Sykes fifth with the Dutch and German stars behind, eighth place was taken by Toprak Razgatlioglu (Turkish Puccetti Racing), ahead of a disappointing Leon Haslam (Kawasaki Racing Team WorldSBK) in ninth and top Kawasaki after Tissot Superpole, Jordi Torres (Team Pedercini Racing); the 31-year-old Spaniard taking his first back-to-back top tens of the season. 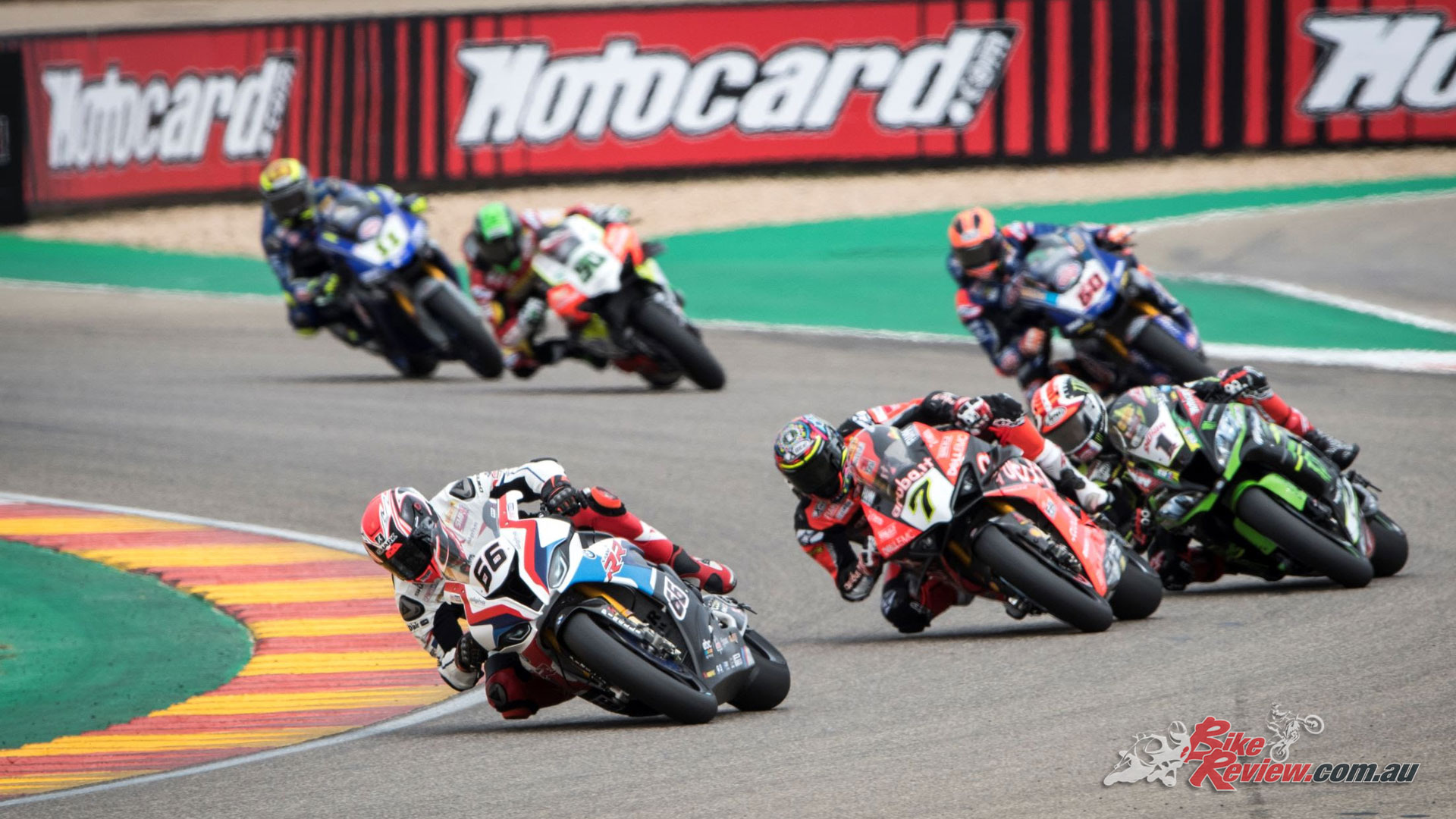 Tom Sykes saying, “I think for how early we are in the project, the programme has just started a few months ago, it is really impressive what the whole BMW Motorrad WorldSBK Team has achieved so far. We’ve made small changes to the bike, of course now we are playing a bit with the electronics, but I think the biggest difference to the previous rounds is that we have a lot more corners here, I think it’s clear to see that we are consistent in the first sectors and we are only losing out in the last sector. I am enjoying riding the BMW S 1000 RR and I’m quite satisfied. It was my decision on the tyre and I just got caught out a bit with the rising temperature. But we definitely got some good information for tomorrow. I’m really excited what’s to come during the season and for now I still think we can make a better race tomorrow.”

Bautista’s win makes it 348 for Ducati, meaning an iconic 350 at Aragon this weekend can still happen. It is his seventh consecutive win and Spain’s first at a Spanish circuit since Ruben Xaus in Race 1, at Valencia in 2007 – also riding a Ducati. Chaz Davies’ podium means it is the first time two Ducati riders have been on the same podium in almost an entire year: MotorLand Aragon Race 2.