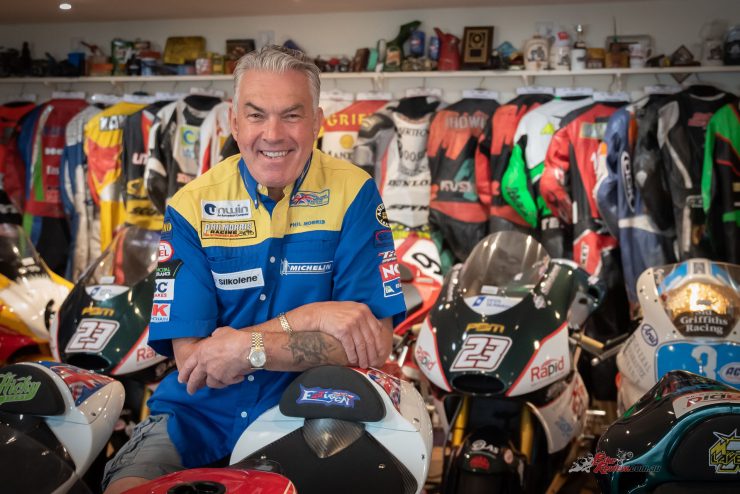 A collection of rare racing motorcycles, campaigned at the highest levels of motorcycle racing from the TT to MotoGP and amassed by a leading figure of the paddock, is to be offered at Bonhams Autumn Stafford Sale on Sunday October 10. 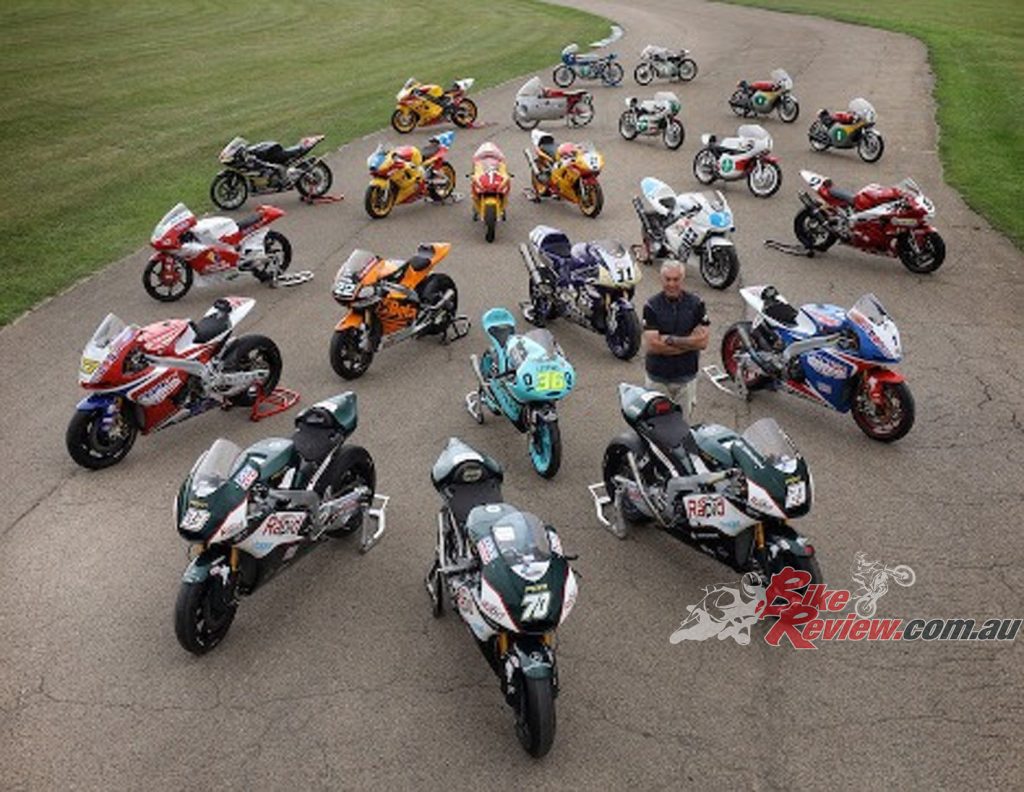 Phil Morris is an avid motorcycle collector and he has decided its time to sell off some of his amazing collection.

The Phil Morris Road Racing Collection of 24 machines are offered direct from the collection in Oswestry: a treasure trove – and one of the world’s largest collections – of motorcycles, leathers and trophies raced, worn and won by some of the most famous names on two wheels and dubbed ‘The Church’ by TT rider Rob Barber.

This landmark collection is led by no fewer than five MotoGP motorcycles, the entire fleet from the Paul Bird Motorsport team, which campaigned in the top-flight series from 2012 to 2014. All Aprilia machines, three are to full MotoGP specification and include the number 1 and number 2 motorcycles from the 2014 season which, according to Phil Morris, “Would have cost 1.6M per bike when new.” 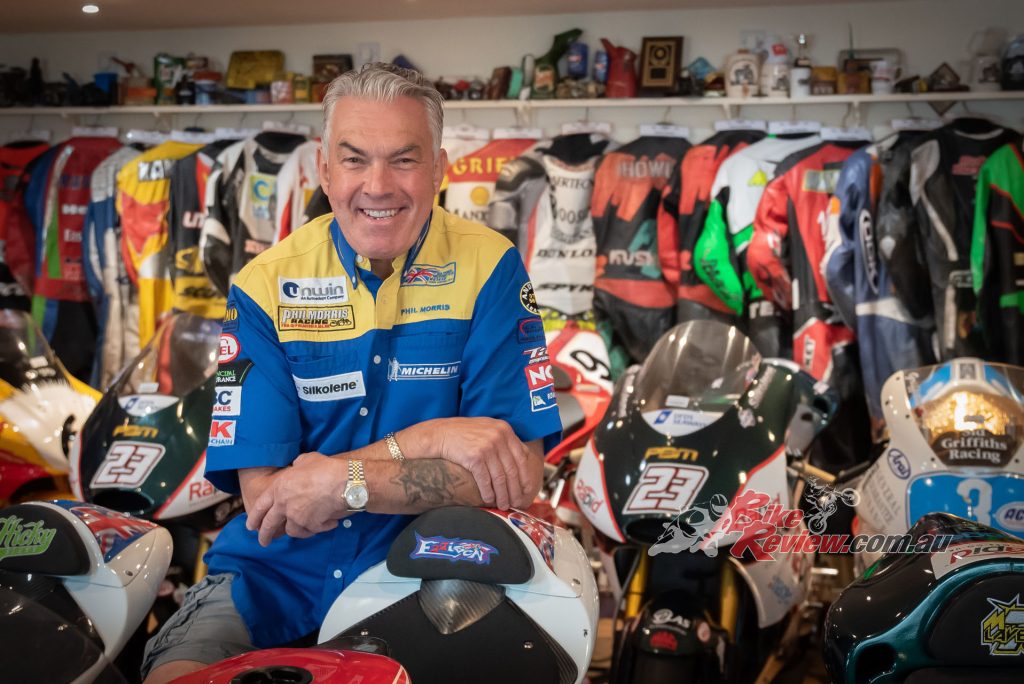 “This landmark collection is led by no fewer than five MotoGP motorcycles, the entire fleet from the Paul Bird Motorsport team, which campaigned in the top-flight series from 2012 to 2014.” Photo: Tim Mitchell

The remainder of the extraordinary collection, including rare sets of spares – wheels, fairings – as well as matching helmets and leathers for the GP bikes, Moto2 and Moto3 motorcycles featuring in the Autumn Stafford Sale, is to be offered in a dedicated online auction later in the year.

Phil, a schoolboy trials racer who graduated to four-wheels competing in the RAC Rally, is well-known in racing circles as a sponsor and team owner. He started collecting motorcycle memorabilia in the 1970s and in 2001 added machines to the mix when he bought back his first Ariel. 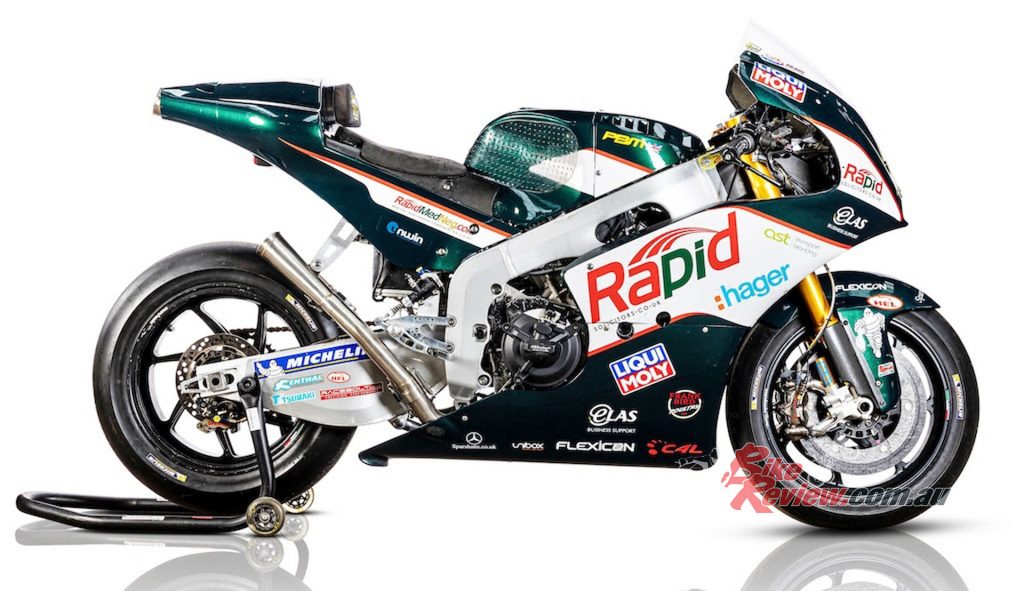 Phil set up a dedicated space for the collection in 2007 when it had outgrown his home and his then wife’s patience. Forty to sixty people would visit every Thursday until the doors closed with the first lockdown last year. 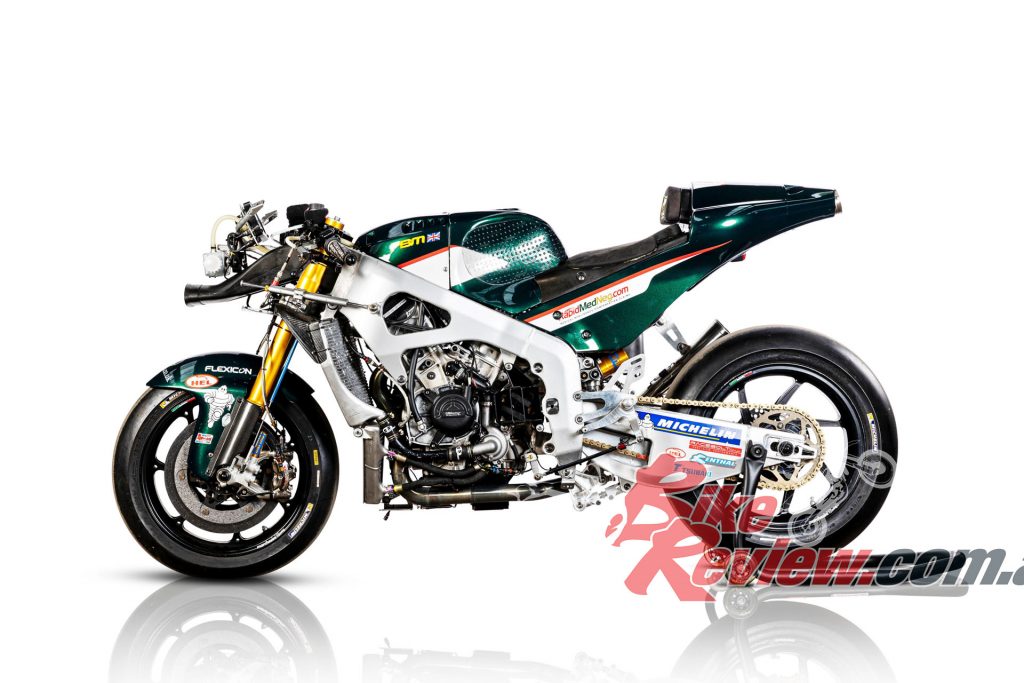 The motorcycles were run by the eponymous team of British businessman Paul Bird during MotoGP’s so-called Claiming Rule Teams (CRT) era between 2012 and 2014. This short-lived lower-cost category, allowed privateers to race alongside factory teams, running production-based engines in prototype chassis. Since coming into Phil’s collection, the motorcycles have been ridden on display laps at circuits such as Mallory Park by the likes of John McGuiness and Steve Plater.

The MotoGP machines offered are:  Ex-Broc Parkes, Paul Bird Motorsport, 2014 PBM-ART 1,000cc Grand Prix Racing Motorcycle, estimate $75,000 – 4110,000. 2014 rider Broc Parks’ number two bike. Powered by a factory-built Aprilia RSV4 engine, with a MotoGP output of 230bhp, it is accompanied by its Magneti Marelli electronics, including the ECU which was re-programmed with data from the end of the 2014 season. The motorcycle also features original FGR fork yokes, Öhlins forks, Brembo brakes and PBM’s own exhaust and carbon-fibre bodywork. 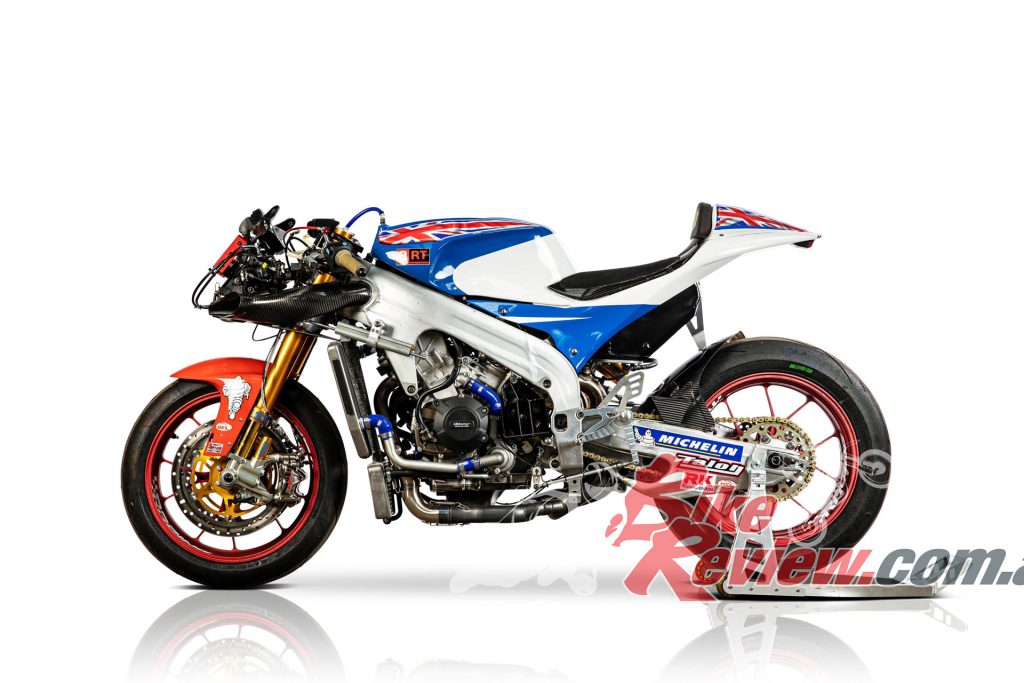 Ex-Michael Laverty, Paul Bird Motorsport, 2014 PBM-ART 1,000cc Grand Prix Racing Motorcycle, estimate $75,000 – $110,000. One of two bikes for Parkes’ teammate Michael Laverty, who scored nine points that season. It is also to MotoGP-specification accompanied by its original ECU with 2014 season data and retaining its race carbon brake discs, Öhlins forks etc. Like its stablemate, it is offered in running condition.

Ex-James Ellison, Yonny Hernandez, Paul Bird Motorsport, 2012 Aprilia Art 1, 1,000cc Grand Prix Racing Motorcycle, estimate $75,000 – $110,000. First campaigned by PBM’s sole rider James Ellison in 2012, in the team’s MotoGP debut, the motorcycle was then assigned to Columbian Yonny Hernandez the year after. Since coming into the Phil Morris Collection it has been fitted with a stock 1,000cc Aprilia RSV4 road bike engine and associated ECU and electronics for practicality. However, it is accompanied by its original factory engine, ECU, parts and bodywork, enabling the machine to be returned to MotoGP specification. 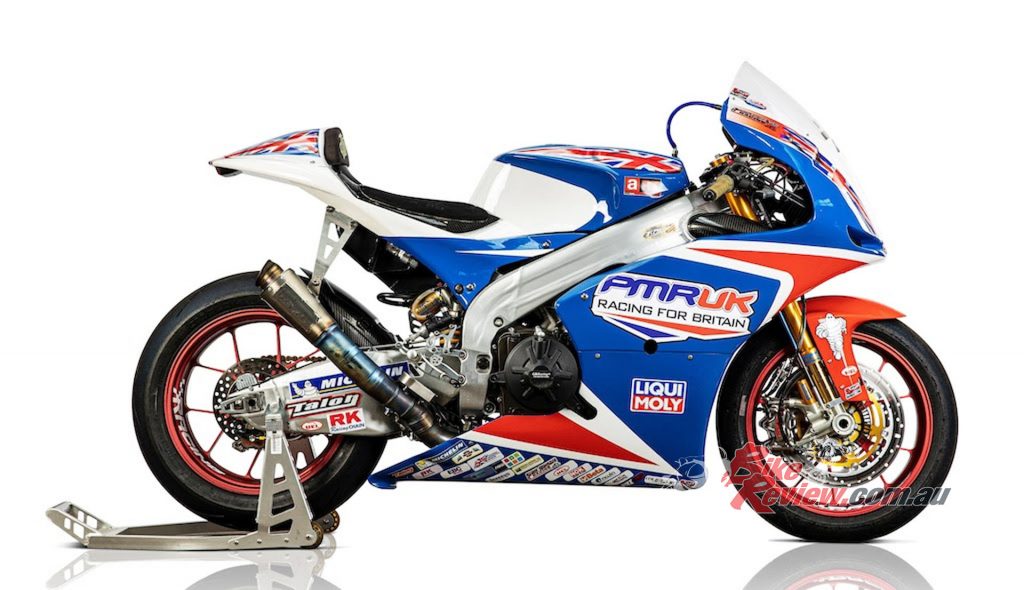 “Since coming into the Phil Morris Collection it has been fitted with a stock 1,000cc Aprilia RSV4 road bike engine and associated ECU and electronics for practicality.”

Ex-James Ellison, Yonny Hernandez, Michael Laverty, Paul Bird Motorsport, 2012 Aprilia Art 1,000cc Grand Prix Racing Motorcycle, estimate $75,000 – $95,000. Like its pair, this motorcycle was ridden by James Ellison for one season before his return to British Superbikes. New signing Hernandez inherited this ex-Ellison motorcycle in 2013 and it was also used by teammate Michael Laverty that year. Its condition and specification are both as it was ‘last raced’ in 2012.

“This is such a unique opportunity for an individual to buy one or even all five MotoGP machines. You cannot buy a privateer MotoGP bike dating from 2015 onwards.” Said Phil.

In 2015, FIM, the governing body for the MotoGP championship, decreed that privateer teams would lease their machines from the motorcycle manufacturers – the frame, swingarm and engine – and would return them at the end of the season.

“Six years ago, petrol scooters were banned from the GP paddock, and I was given this for paddock use by Yamaha. I had it for bombing around. It was sponsored by the Liquid Paint Factory, who took all the plastics off and dipped them. It’s fantastic. Everyone who sees it loves it.” 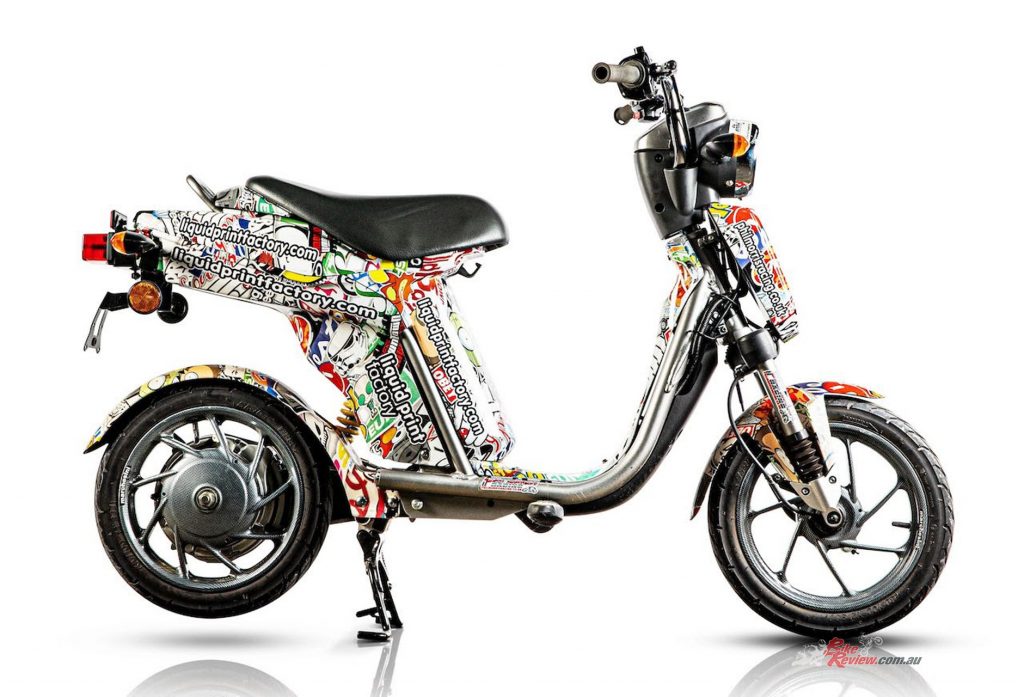 Phil said that although the MotoGP machines are the highlights of the collection, his personal favourite is the 2018 Yamaha EC03. electric scooter (estimate $2000 – $3000).

The Autumn Stafford Sale will be a two-day live auction at its traditional venue, the Staffordshire County Showground, in conjunction with The Classic Motorcycle Mechanics Show. It will offer more than 300 motorcycles and 140 lots of motorcycles spares and memorabilia on Saturday 9 and Sunday 10 October. Click here to check out the full collection!