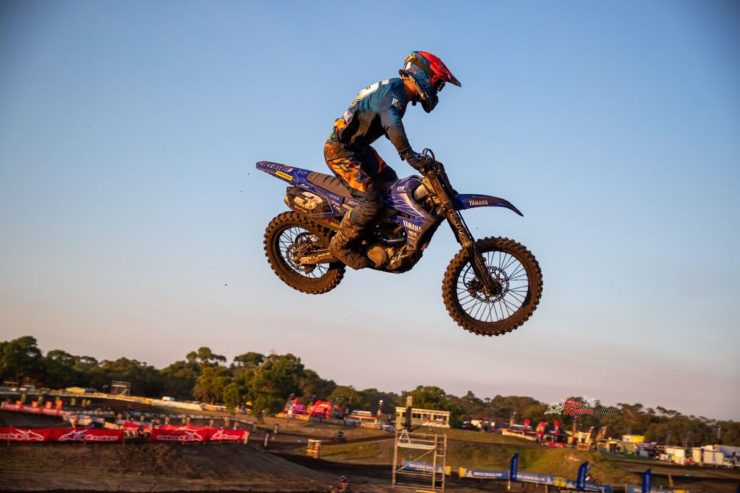 Wonthaggi in Gippsland Victoria hosted the season starter for 2022 and a good crowd gathered on hand to watch the countries best motocross racers do battle on a tough and demanding track that always exposes any weakness.

Yamaha entered a team supported female into the Women’s competition and 16 year old Charli Cannon did not disappoint. A clearly nervous Cannon quickly shook off any jitters and went about asserting herself as the fastest female in the country in the two, fifteen-minute races contested in warm and sunny conditions. 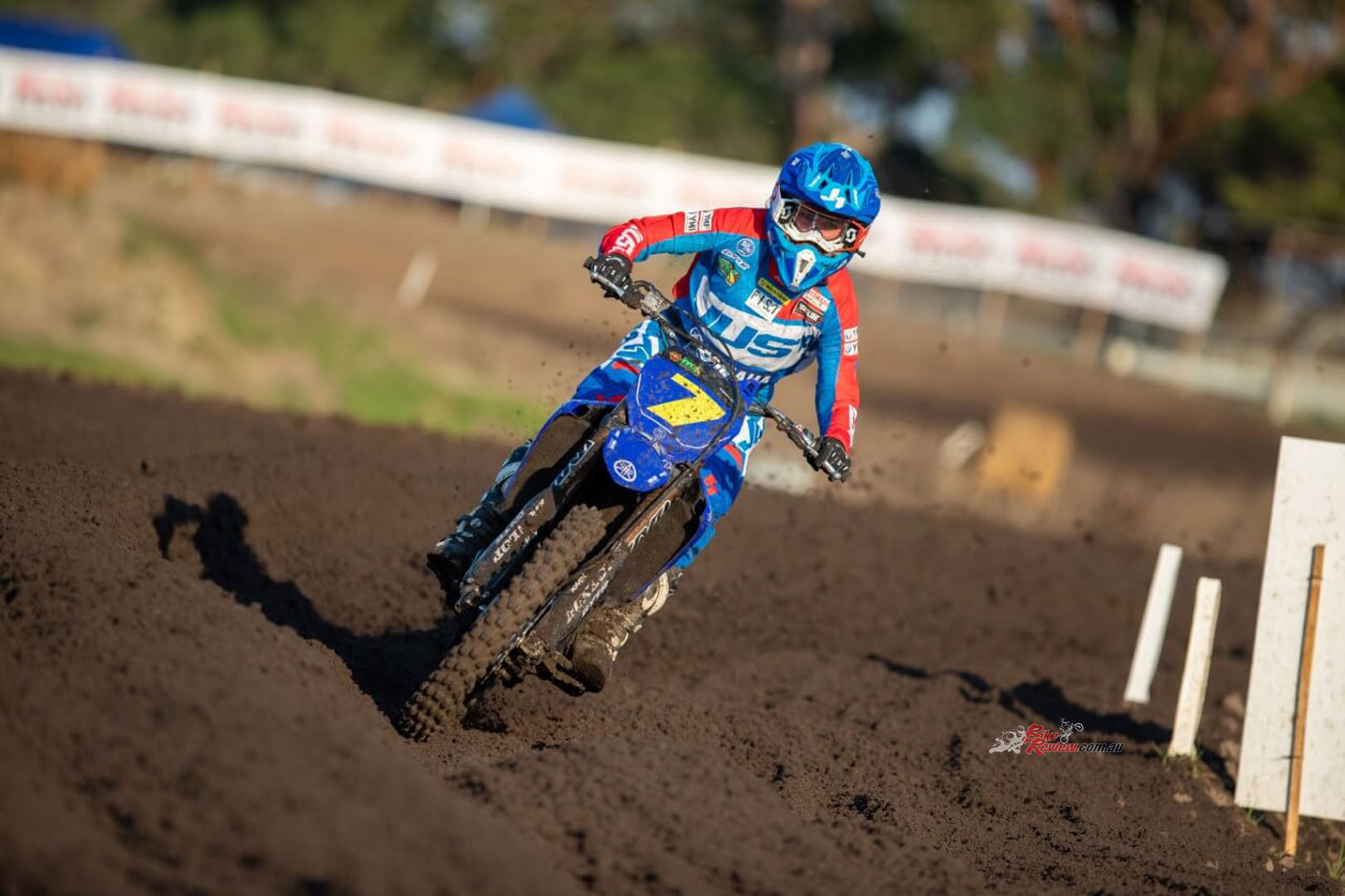 Race one saw Charli’s winning margin at 32 seconds and race two the gap was 28 seconds, but she remains humble and determine to keep improving as the season progresses.

Right from the drop of gate in race one, Cannon was in a league of her own. She quickly raced to the lead and began to stretch her lead over her rivals in both motos and go on to take the perfect 1-1 start. Race one saw her winning margin at 32 seconds and race two the gap was 28 seconds, but she remains humble and determine to keep improving as the season progresses.

“I’m so glad to just get that race out of the way as I was so nervous all day yesterday and today,” she says. “I have raced a lot of the girls but never all at once and never in an event as big as this, so it was a bit overwhelming this morning and I’m glad I got through the day. The track was hard and really physical, but my bike worked great the team were awesome. Everyone helps, even Rhys and Alex were helping me with where to go and what to do. It’s a few more rounds before we get to the next Women’s round so, I might do some of the MX3 races to stay sharp. Thanks to the Yamalube Yamaha Team, their support has been amazing and all our team sponsors.” 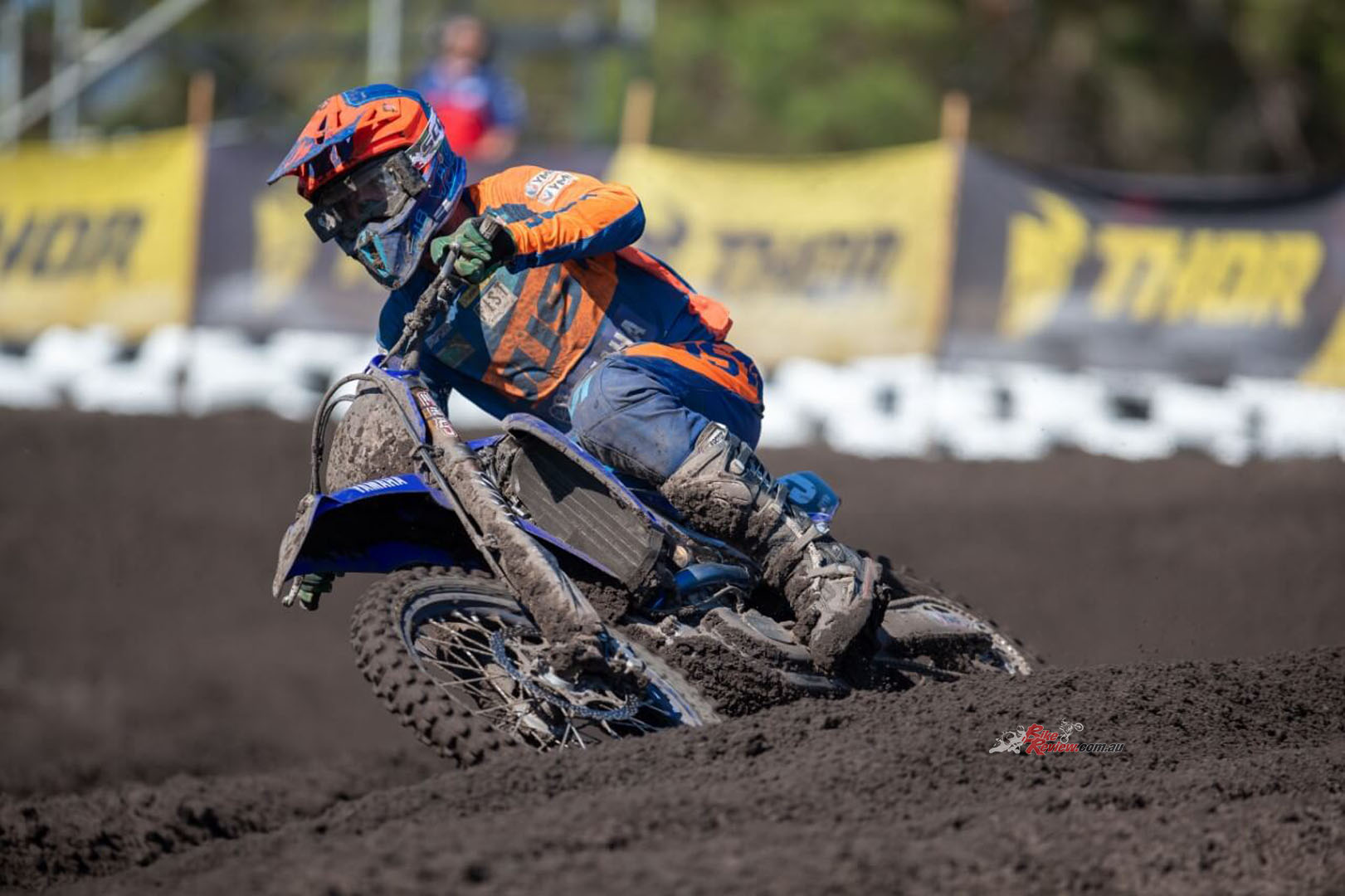 Alex Larwood made a welcome return to racing after an injury lay off last year and instantly hit the podium.

Alex Larwood made a welcome return to racing after an injury lay off last year and instantly hit the podium. Larwood likes the Wonthaggi circuit and was confident in getting a good result with lots of friends and family their in support.

He started his weekend strong with P2 in qualifying, just a few tenths from pole. Race one fired from the gates and Larwood was comfortably inside the top five. He moved his way forward before settling into second and in pursuit of race leader Wilson Todd. For the next 20 minutes, Larwood shadowed Todd and was never further than two seconds apart, but at the same time, couldn’t draw close enough to make a passing attempt. He crossed the line one second behind Todd to finish second for the race. 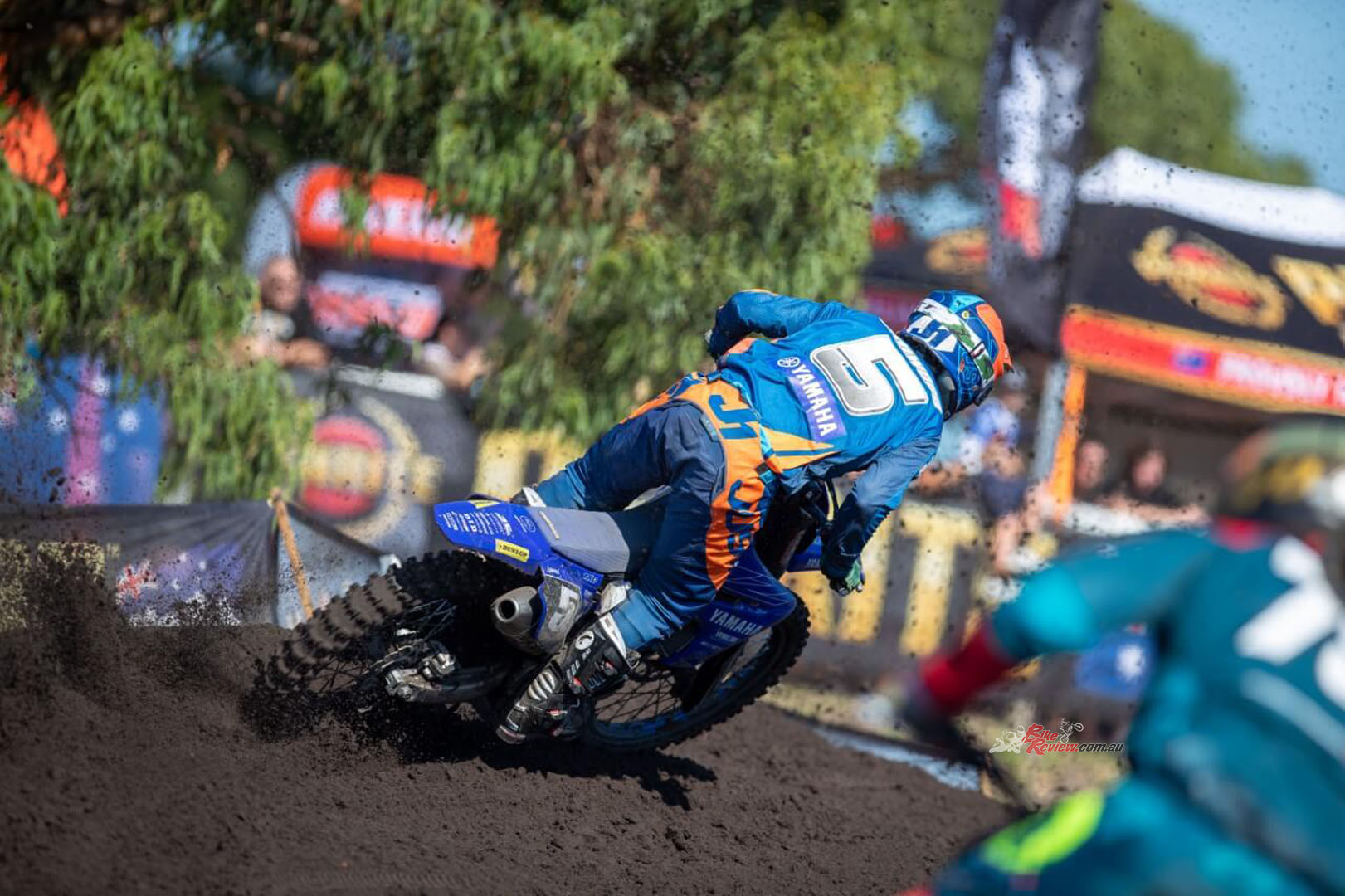 The second moto presented more challenges as Larwood mis-timed his jump from the gate and was mired mid pack as the 40-rider field charged through the first turn.

The second moto presented more challenges as Larwood mis-timed his jump from the gate and was mired mid pack as the 40-rider field charged through the first turn. He got to work and began picking off riders at will and again made his way to second place with ten minutes remaining. He closed the gap on Todd, who was again out front, and began to apply the pressure. And again, Todd resisted and Larwood was unable to make a way past and had to settle for another second place, giving him second for the round.

“Today was a good day and I’m happy with how things went. I rode two strong and consistent races all the way to the end and felt I was in the battle and making Wilson earn it. I couldn’t get close enough to try and make a pass, so congrats to Wilson as he didn’t make a mistake that I could capitalise on in either moto. Thanks to Nash and Mike on the team for getting everything ready and the work they put in as well as my family that came over from South Australia to watch me. It’s great to get the first round out of the way and start on a positive note,” Larwood offers. 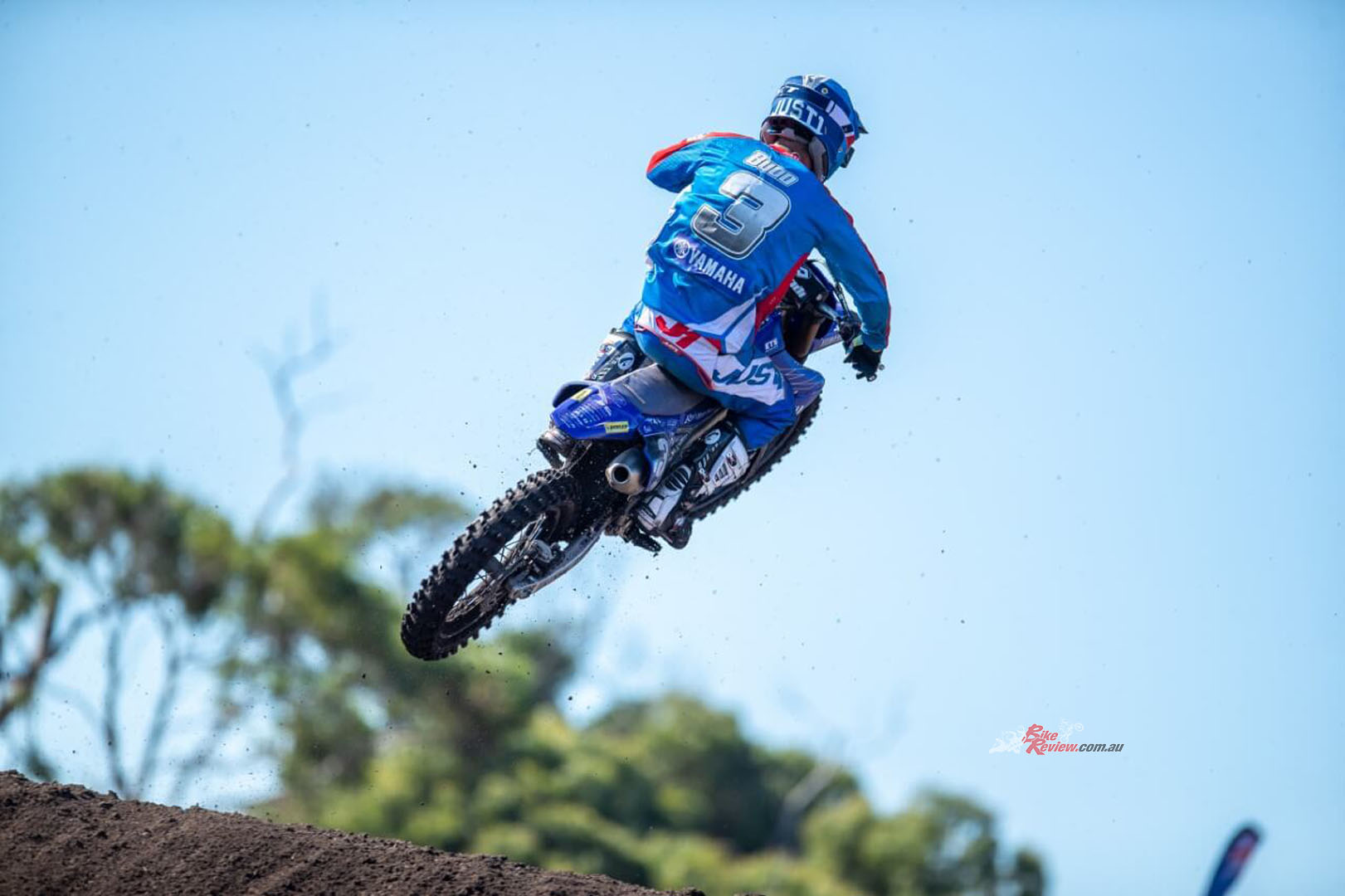 Rhys Budd didn’t have the day he was wanting but the hardworking rider is determined to redeem himself at the next round in Mackay. Budd finished ninth for the round with 13-6 moto results.

The opening race saw Rhys Budd move into the top ten after an average start and close in on a pack of four riders fighting over position. Just as he was ready to pounce and continue his charge forward, he fell from his bike and remounted back in 20th place. He got back into his flow and was able to get to 13th by race end.

He got a much better start in race two and was inside the top five in the opening laps. He quickly burst into the top three and held that position for several laps before coming into the clutches of some fast-moving riders behind him. He battled on but could only manage a sixth-place finish but vows there are better days ahead. 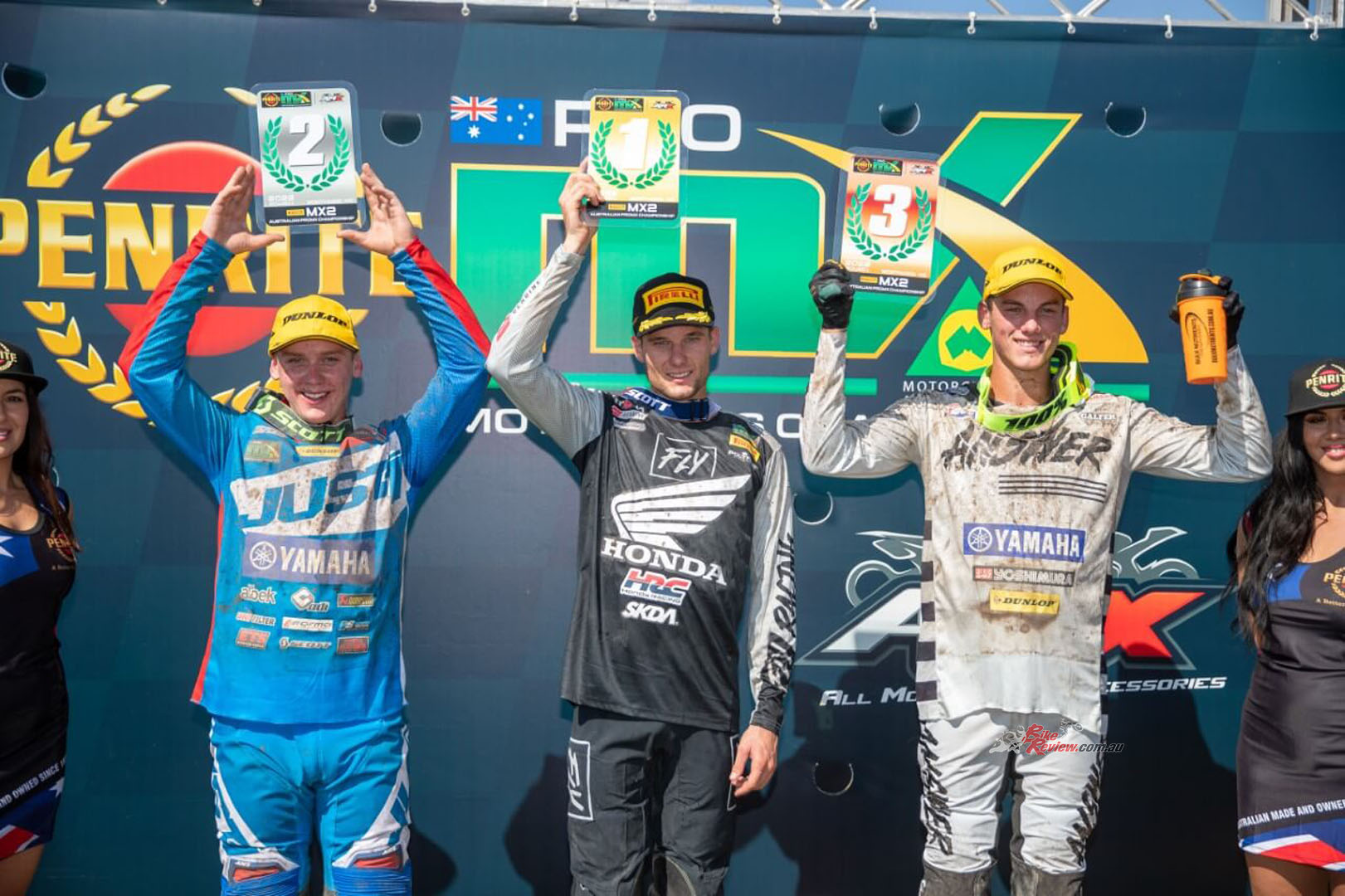 Overall, a very successful opening round of the ProMX for Yamaha as a whole…

“Today wasn’t great and I know I can and will do better,” he laments. “The first race I got a terrible start and was dodging crashes and pile ups everywhere on the first lap. I made my way through and was doing ok before I made a mistake and went down over the back.”

“Race two was a step in the right direction as my start was better and I was able to hustle a bit in the early stages. Still some work to do, but I will take some positives from that, put my head down and come back at Mackay with a much better performance,” Budd said.