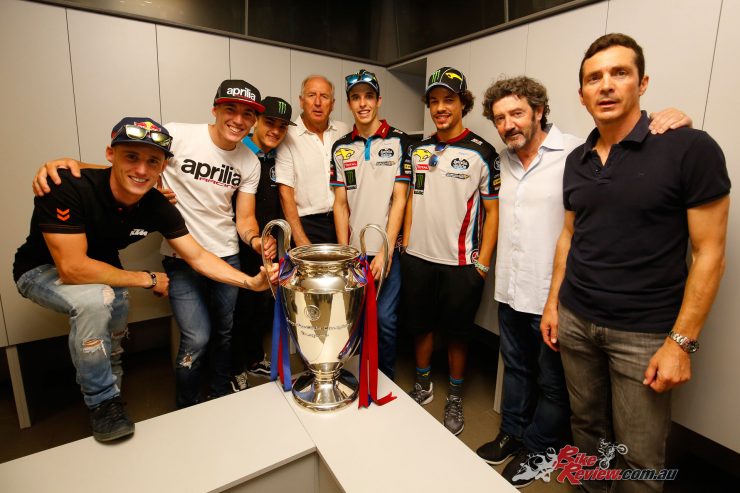 It’s soon time for the Gran Premi Monster Energy de Catalunya at the Circuit de Barcelona-Catalunya, but ahead of race talk it was time for a little more tourism, with Aleix Espargaró (Aprilia Racing Team Gresini), Pol Espargaró (Red Bull KTM Factory Racing), EG 0,0 Marc VDS riders Alex Marquez and Franco Morbidelli and EG 0,0 rider Aron Canet heading to FC Barcelona Stadium Camp Nou for a tour to celebrate 25 years since the squad won their first European Cup at Wembley – as well as a quick kickaround on the pitch with some legendary players such as Jose Mari Bakero, Carles Rexach, Julio Alberto and Guillermo Amor. 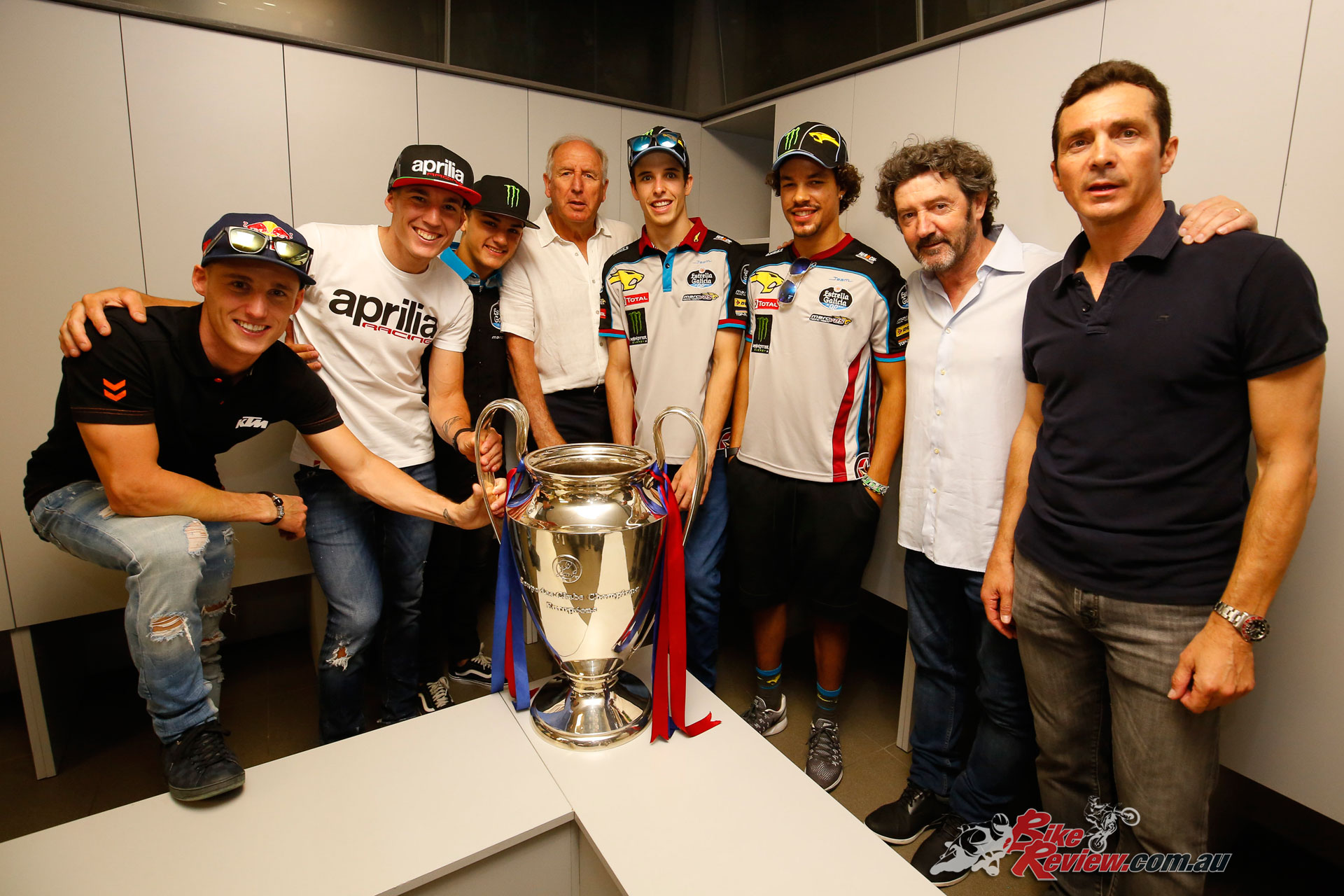 Back at the track, this weekend there is a photo exhibit dedicated to Luis Salom, who tragically lost his life in an accident at the Catalan GP last year. Featuring contributions from many of the MotoGP paddock’s permanently accredited photographers, the shots remembering the ‘Mexicano’ are placed along the corridor outside the Media Centre, and have been visited by many – including Dorna CEO Carmelo Ezpeleta, Joan Fontseré, General Manager of the Barcelona – Catalunya Circuit, Pedro Mas, President of the Balearinc Motorcycle Federation, Marco Rodrigo, Luis Salom’s manager, Angel Vialadoms, President of the Managing Commission of the Spanish Motorcycling Federation. Also, riders as Julito Simón, Jorge Lorenzo, and Tito Rabat. 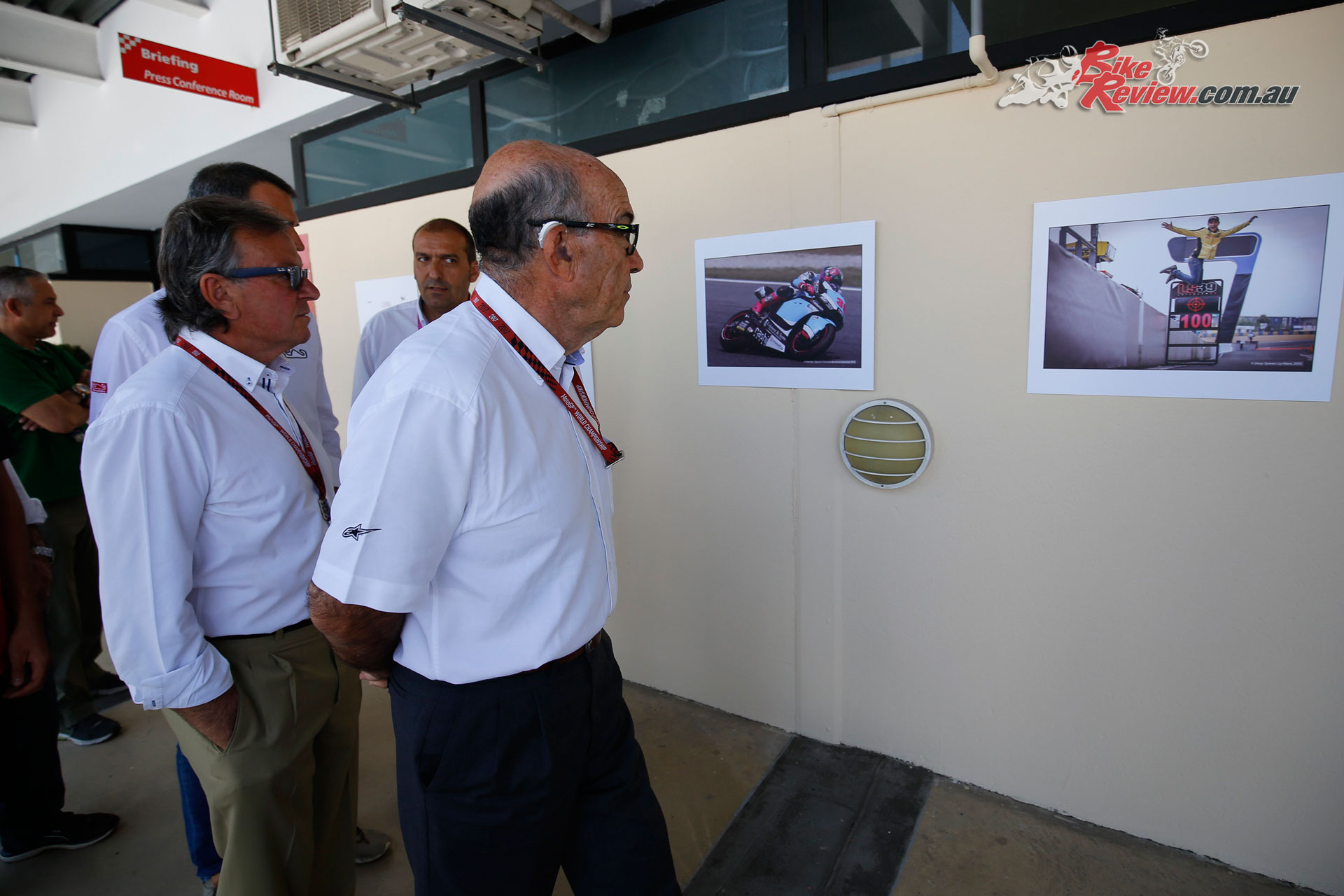 Tribute to Luis Salom, a photo exhibit by the photographers who cover MotoGP

In addition, as part of KiSS Barcelona, reigning Champion Marc Marquez (Repsol Honda Team) has planted a symbolic tree at the Circuit de Barcelona-Catalunya in his role as FIM Ride Green Ambassador, accompanied by young representatives of the “Climate Justice Ambassadors Network”, who have planted millions of trees around the world in collaboration with private and public institutions.

On to the business of racing, Valentino Rossi (Movistar Yamaha MotoGP), Danilo Petrucci (Octo Pramac Racing), Andrea Dovizioso (Ducati Team), Maverick Viñales (Movistar Yamaha MotoGP), Alvaro Bautista (Pull&Bear Aspar Team) and Marc Marquez (Repsol Honda Team) were on duty for the Pre-Event Press Conference, with talk centering on tyres – as always – as well as the hot temperatures of Barcelona, and the new layout in the final sector of the track.

Championship leader Viñales was first to speak, assessing his feelings now we’re a third of the way into the season – and seeing the positives of the new chicane added towards the end of the lap at his home race: “I’ve become stronger every time I get on the track, my bike and my team. In this part of the season I have good communication with my team and I feel great, the bike is there so we just need to do a lot of laps with the new layout. With the tyres, we need to work hard, especially in the hot conditions. It’s difficult to believe I’m leading the Championship. I’ve always been fast here, I love the track and the fans, and it’s great that I also feel good with the bike. But the new layout will make a difference. Let’s see with the setup, but I think with my riding style it will be a good part of the track.”

Dovizioso first looked back at Mugello – his first win in the dry at both his and Ducati’s home race – before a more measured outlook for the next GP: “The race in Mugello was unreal for us. I really didn’t expect it during the race. My pace was really good – I was a bit surprised and really happy. I could keep the same laptime until the end and the feeling with the bike was great.

There were positives and negatives, but a lot of positives. But here is a completely different track and the test wasn’t so good. So I have a big question mark about this weekend. It will be important to see our speed, and if we can confirm it here it will be important. But we know this track is difficult for everyone. The grip isn’t so good, the tyre drops…it’s not so easy to manage, and it’s very hot in the afternoon. It’ll be very difficult for everyone, but for sure we arrive here confident!”

Feeling a little more confident – although not at 100% – is Valentino Rossi, who arrives to Montmelo more hopeful than Mugello after a motocross crash before the Italian GP, and won the race here last year: “My condition could be better, to be at 100% I would have needed another week, but unfortunately these races are in a row – it’s a shame, also for the Championship because they’re two of the best races in the Championship so it’s so busy! But fortunately for me I had a good race in Mugello and rode in front of all the fans, I didn’t have pain, but I knew I had to suffer a bit more over race distance because I was struggling more to ride the bike. So I hope here can be better. We need to understand the lines, the right way to ride the new layout, and the potential of the bike. We just need to be more competitive – the target is to be on the podium and have a good race.”

Reigning Champion Marquez was less conservative, saying his aim is the win this weekend – and that tyres will be the key: “Every race is important but a home race it’s always a special feeling with friends, family and my fan club here, so I’ll try and give 100% but also something more, and try and fight for the victory on Sunday. We know we need to work hard because it will be very warm, and we need to choose the right tyres. In Mugello I didn’t feel so bad during the weekend, but on Sunday we spoke a little bit and we realised we couldn’t finish the race with the tyre I liked best.

“So I chose the tyre with no feeling but to be able to get to the end. Here we hope to have a different feeling with the front. It’s a bit different here now, it’s like it has two parts – it’s only two corners changed but it’s quite a big change. In the test it was hard to find the right line, but I don’t think it will be much different in terms of the overall lap.”

Then it was time to give the mic to Petrucci – Mugello podium hero at Pramac’s home race – who spoke more of his own increased consistency, and had a request for Andrea Dovizioso: “‪From Saturday in Mugello we knew I could be fast, but maybe top five or close to the top five – I didn’t expect to fight for the race or the podium. It was good, I think it’s part of my process to be faster in the dry. Here the tyre choice will be crucial, and trying to set up the bike to save the tyre. This year I’ve made a big step in consistency in the races. In Austin I was two seconds behind Dovi, in Jerez the same – and in Mugello the same. So maybe Dovi can wait two seconds for me on Sunday?”

Consistency is also the key for Alvaro Bautista, who got some of it back in the Italian GP and wants to keep that ball rolling – with finishing the race at the Circuit de Barcelona-Catalunya with some good points the target, rather than any concrete goal: “In other races we were fast and consistent in practice, but I crashed when we’d been quite competitive. In Mugello we improved qualifying a bit and I could start further forward, and then for me it was important to finish.

“So I just got my rhythm and was in the top five. It was important for me and the team, for motivation and confidence. From the beginning I felt really good on this bike, and in the races and in race pace. Austin was more difficult, but in the rest I felt good. We can finish in good positions, but then crashes are also part of the game. So I’ll try to keep this line we got in Mugello and try and be more consistent, finishing and taking points.”

25 of those points are on offer this weekend for the winner of the Gran Premi Monster Energy de Catalunya – what remains to be seen is who can navigate the low grip, tyres and setup the best, and all underneath the boiling sun of Barcelona. ‪At 13:00 (GMT +2) on Sunday, we’ll find out.