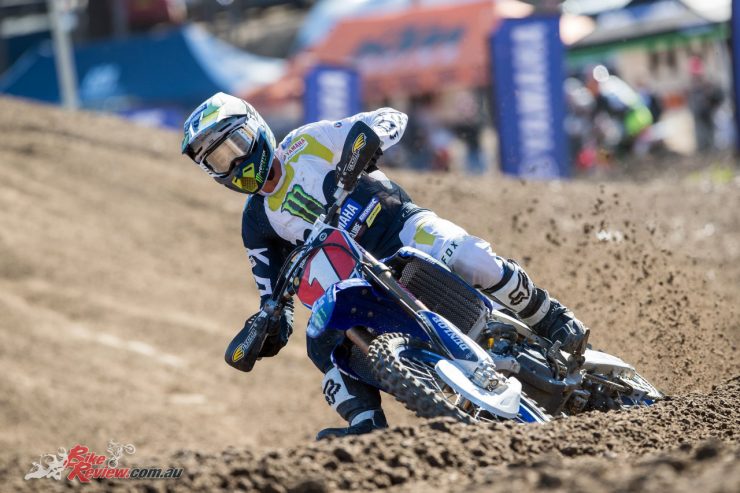 A reformatted rounds seven and eight saw both rounds decided on Sunday, as Ferris relied on consistency to maintain his perfect Thor MX1 round streak for season 2018. 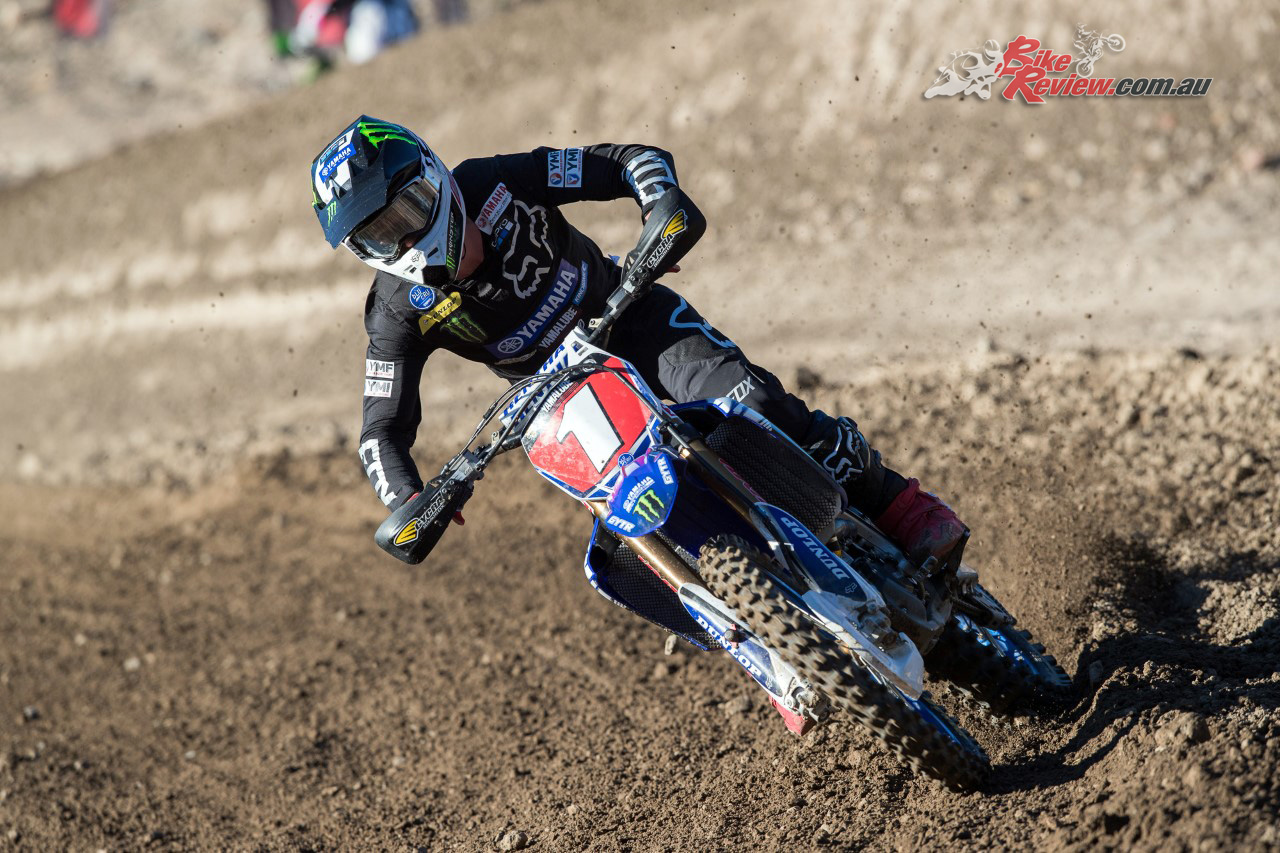 The opening moto of the weekend saw Ferris jump to the front from the opening lap and controlled the race on his way to a 1.8-second victory over Metcalfe. Raceline Pirelli KTM rookie Mitch Evans finished third after relinquishing second to Metcalfe with just three laps to go. Clout and Complete Parts Kawasaki Racing’s Rhys Carter rounded out the top five. 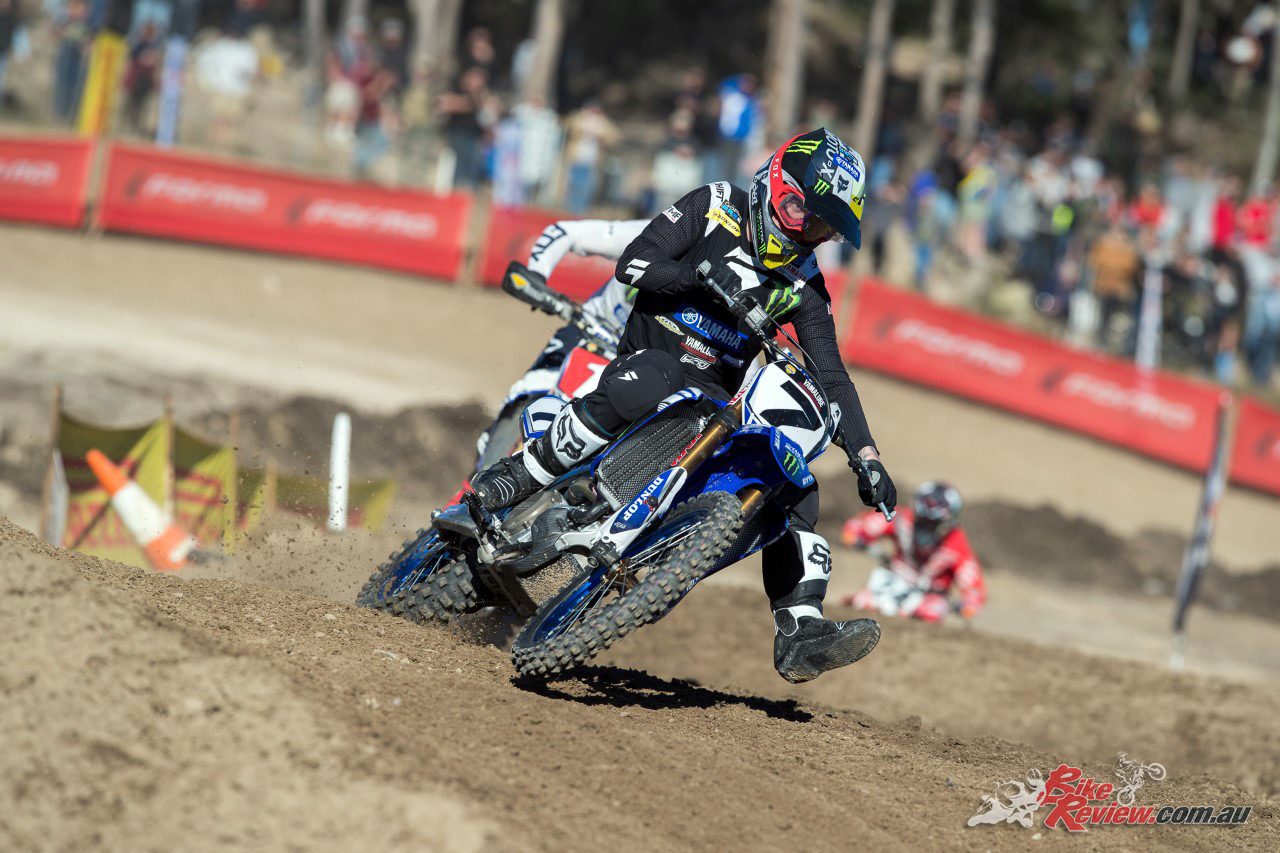 In the second moto for round seven, Long broke through for his first race victory of the year with a wire-to-wire win. Long led runaway points-leader Ferris across the finish line by 4.5 seconds, who in turn finished ahead of Clout, Metcalfe and Carter.

Round eight this afternoon ran as back-to-back eight-lap sprint races, emphasising the need for perfect starts. Ferris rode to a consistent 2-2 result to claim his eighth overall of the year, just one point ahead of Clout, with Long rounding out the podium. 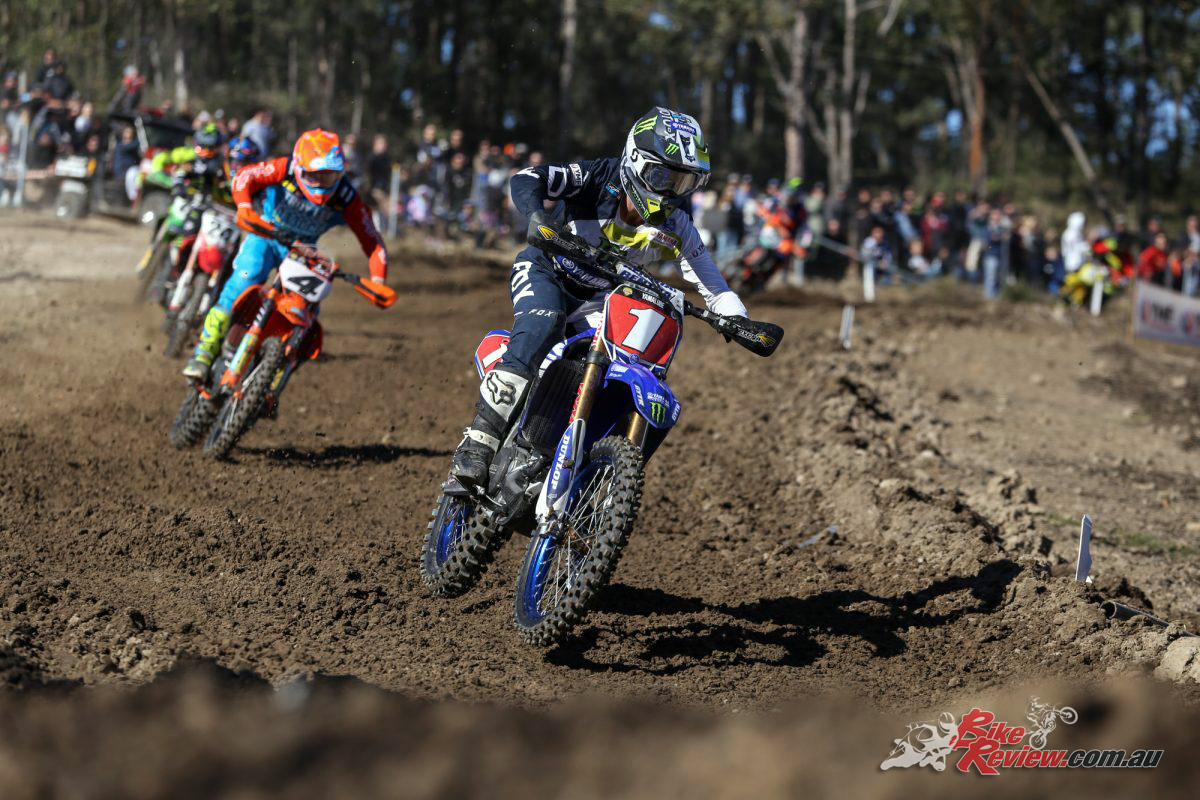 In the opening moto Long stormed to the front of the pack and led every lap on his way his second win of the day. Ferris placed second, ahead of Metcalfe, Clout and Evans.

In the second race Clout timed his gate-jump perfectly to lead every lap and keep Ferris at bay by just one second at the chequered flag, who in turn finished just in front of Evans. Carter finished fourth, with Long letting an overall victory slip through his fingers after dropping from second to fifth over the course of the race. 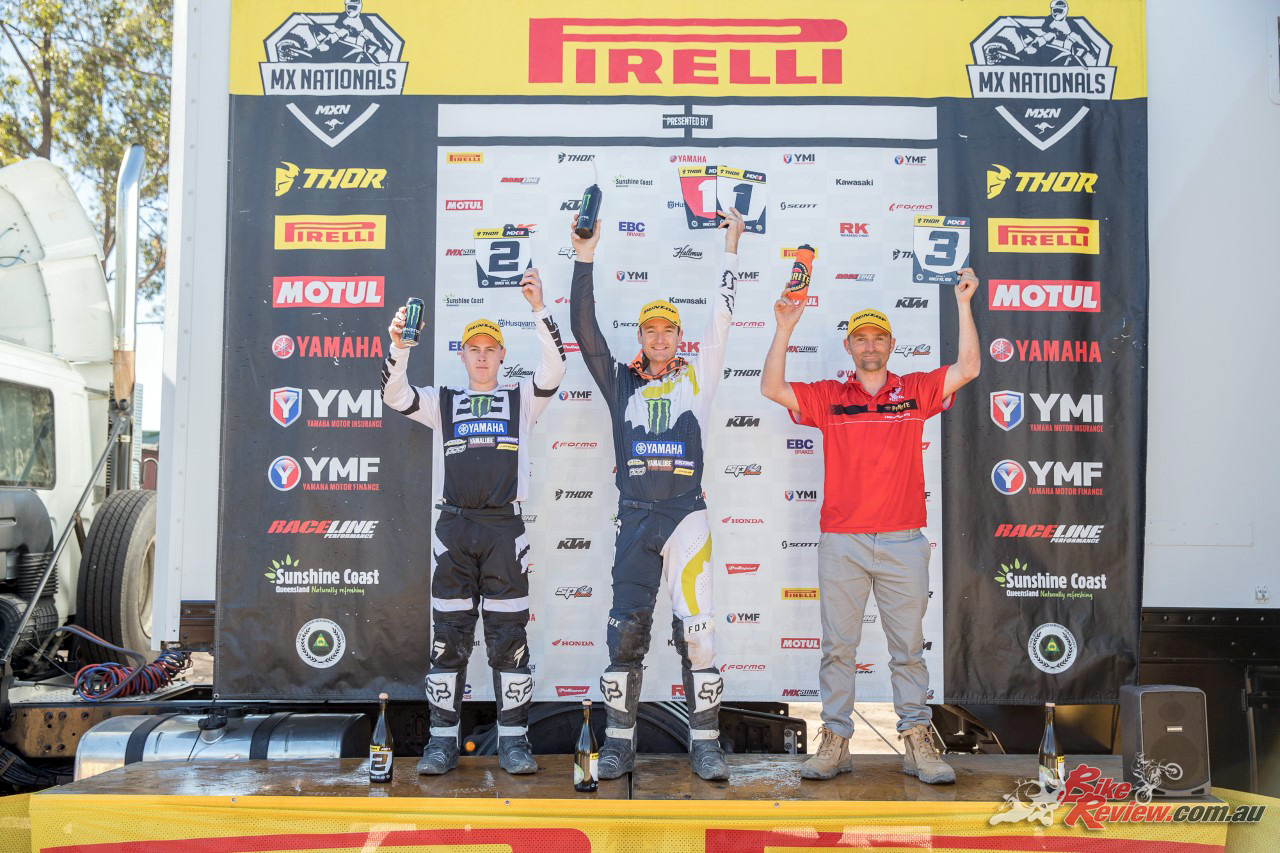 Complete Parts Kawasaki Racing’s Aaron Tanti and DPH Husqvarna’s Dylan Wills made the most of an unpredictable weekend of racing in the Pirelli MX2 class to both claim round victories at the Ranch MX circuit. 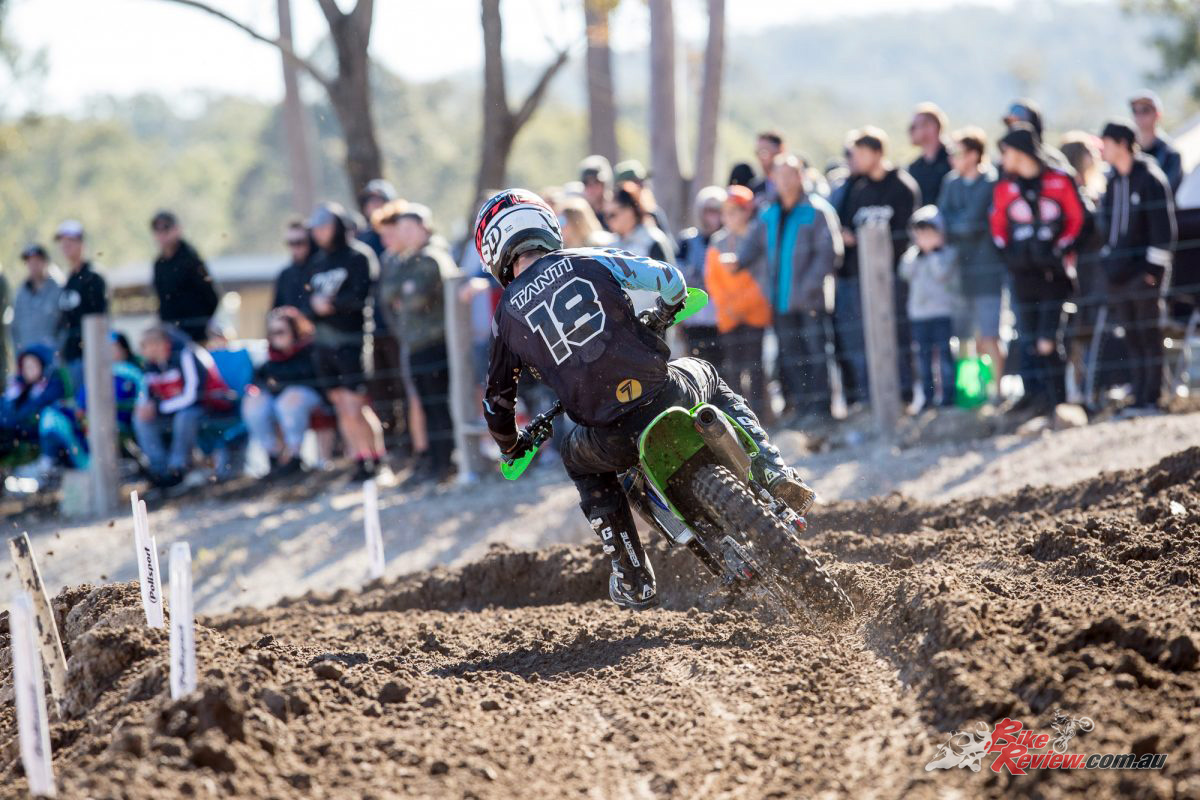 For round seven, early 2018 championship leader Tanti used consistency to take him to the top of the box with a 3-2 result card, with a one-point win over moto two winner Hamish Harwood (Davey Motorsports KTM) and series leader Wilson Todd (Serco Yamaha). 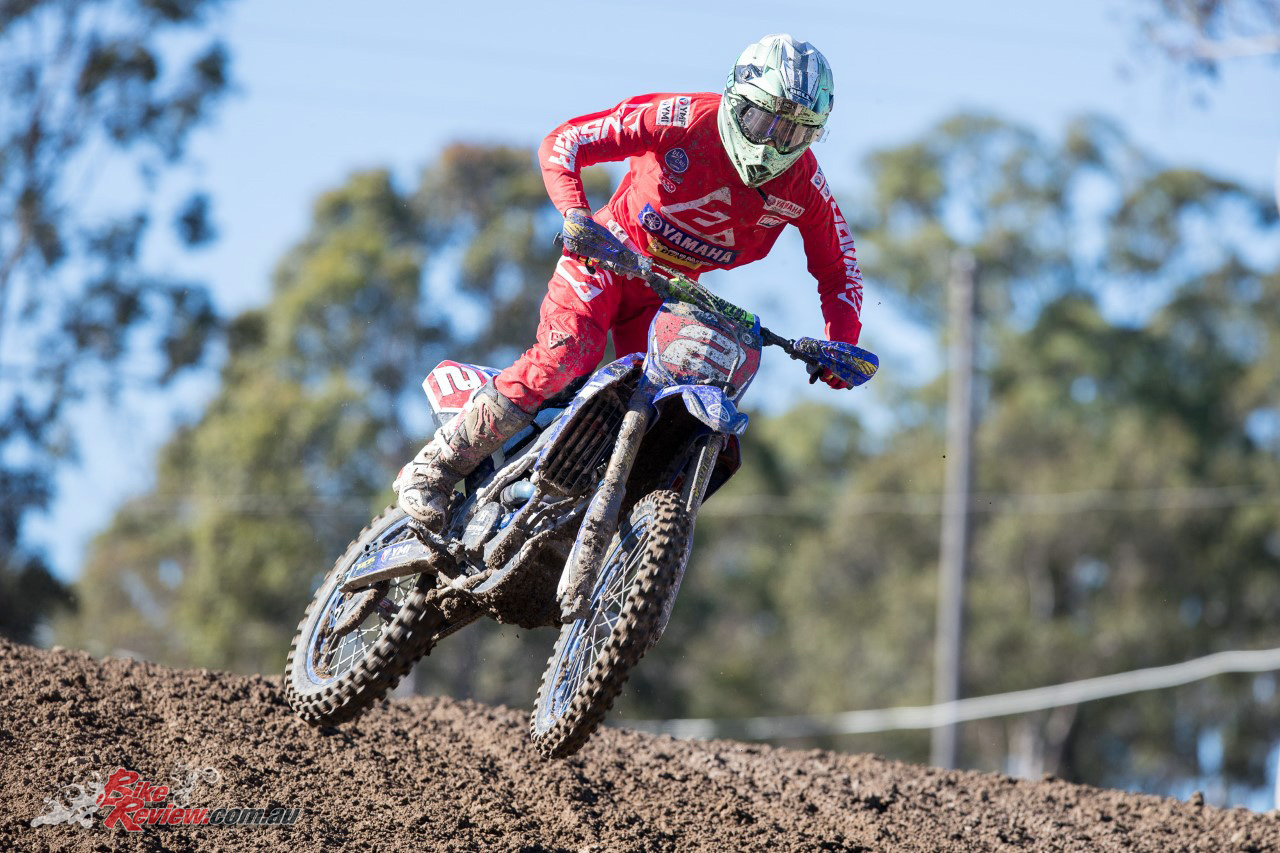 The second moto saw Harwood take control early on to eventually win the race, but was kept honest throughout by Tanti and Jay Wilson (Yamalube Yamaha Racing). Wills clawed his way to fourth place, ahead of Todd.

For round eight, Wills broke through for his first round victory of the championship with a 2-1 result, beating Todd’s 1-2 result on countback. Tanti rounded out a positive weekend with hard-fought third overall.

The first of the two back-to-back sprint races saw Todd quickly take control and stretch out a relatively commanding 5.2-second lead over Wills, who snuck by Harwood in the closing corners to snatch second. Tanti and Wilson followed close behind to round out the top five. 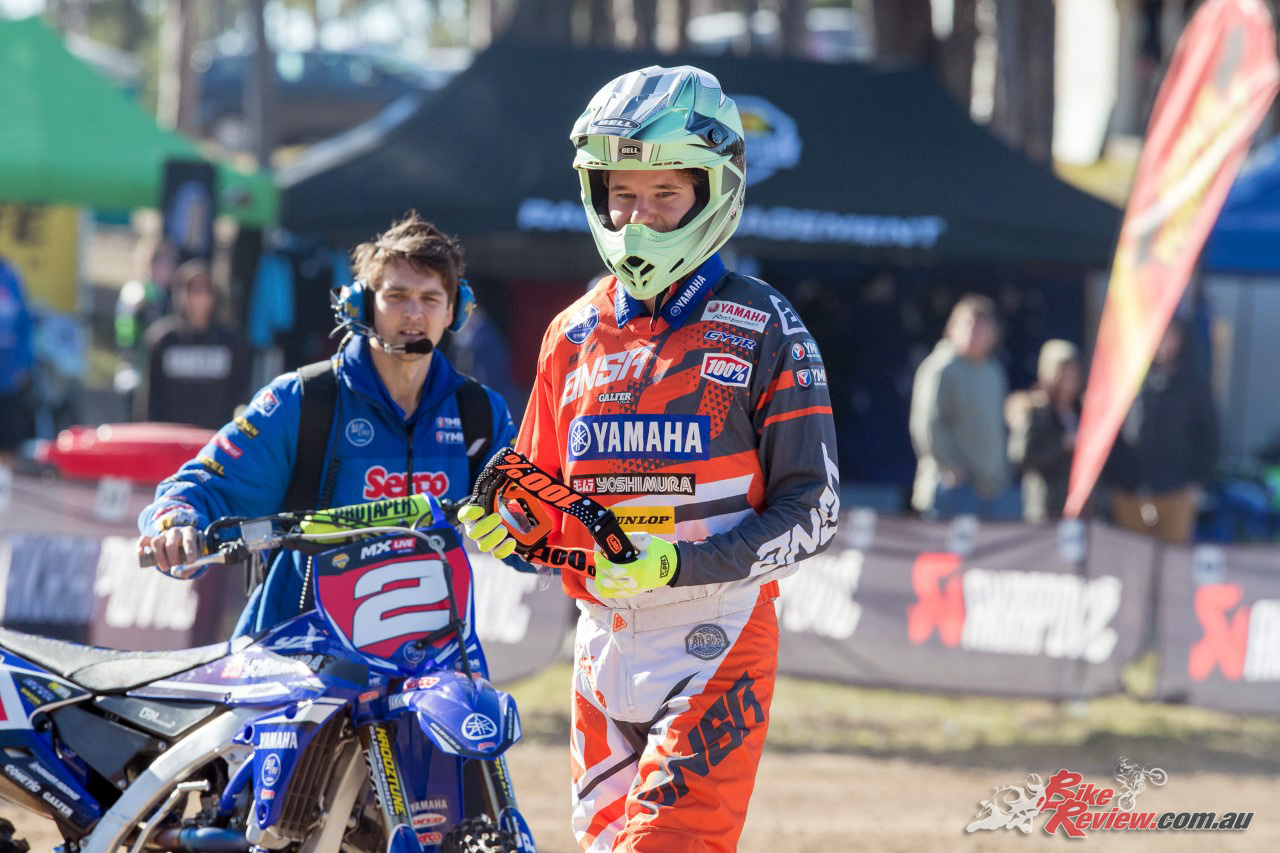 In the second seven-lap race Wills was quick off the gate to establish himself as the leader and was never headed. Todd rode a controlled race to second, ahead of Tanti and Wilson. Wilson’s Yamalube Yamaha Racing teammate Richie Evans claimed a weekend-high fifth place. 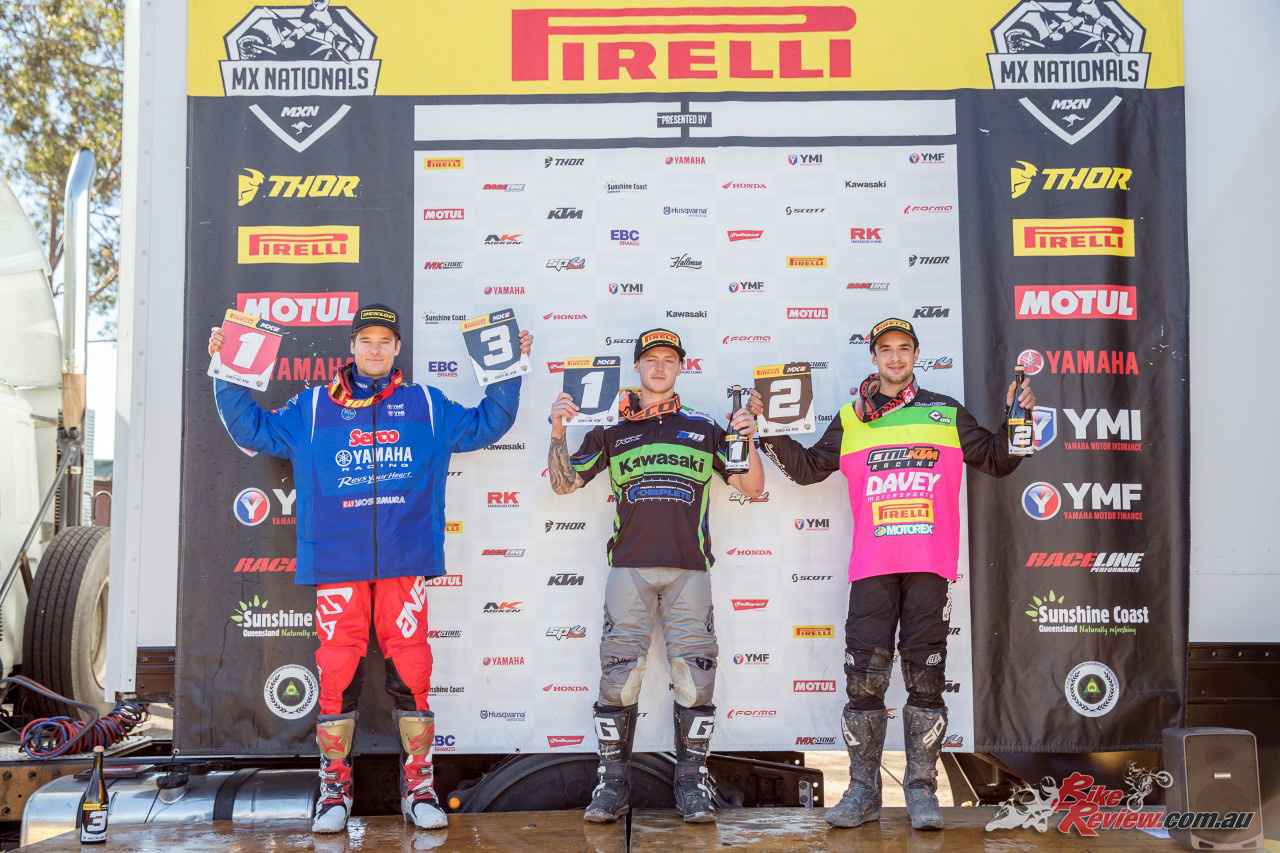 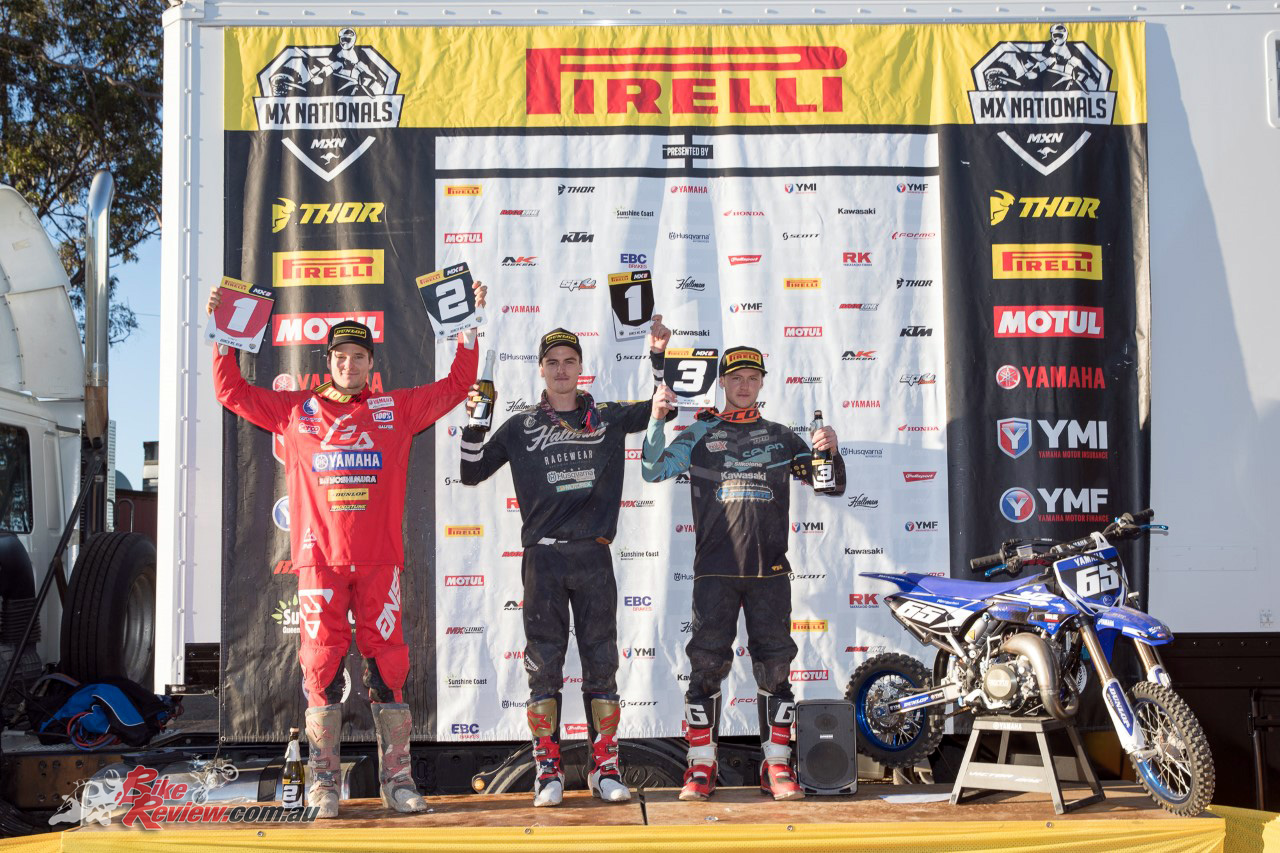 For round seven, Malkiewicz chalked up back-to-back wins to strike a commanding 22-point victory over Dukes and Honda pilot Rhys Budd and take over the championship red plate in the process. 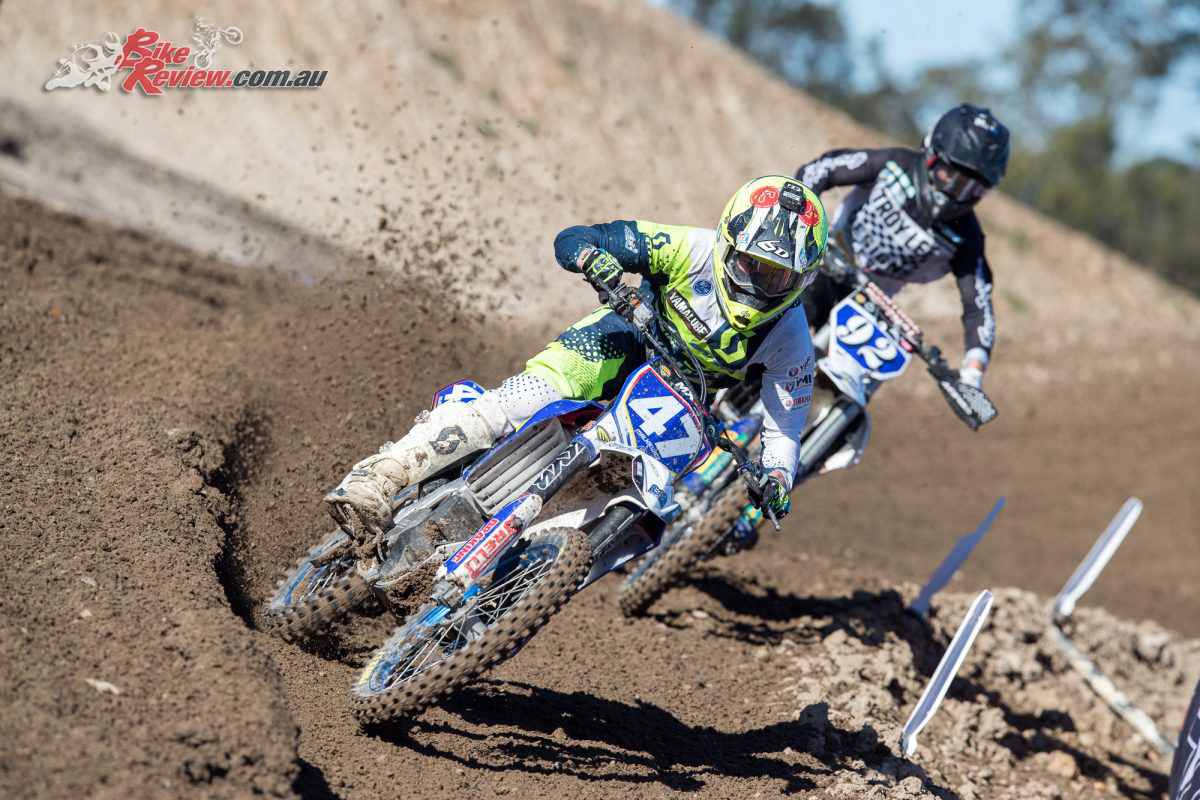 In the opening race Malkiewicz passed Jye Dickson (KTM) for the lead on the third lap and tore away to a 7.1-second lead. Budd crossed the line third ahead of Riley Dukes (Husqvarna) and Kiwi Maximus Purvis (JCR Altherm Yamaha). 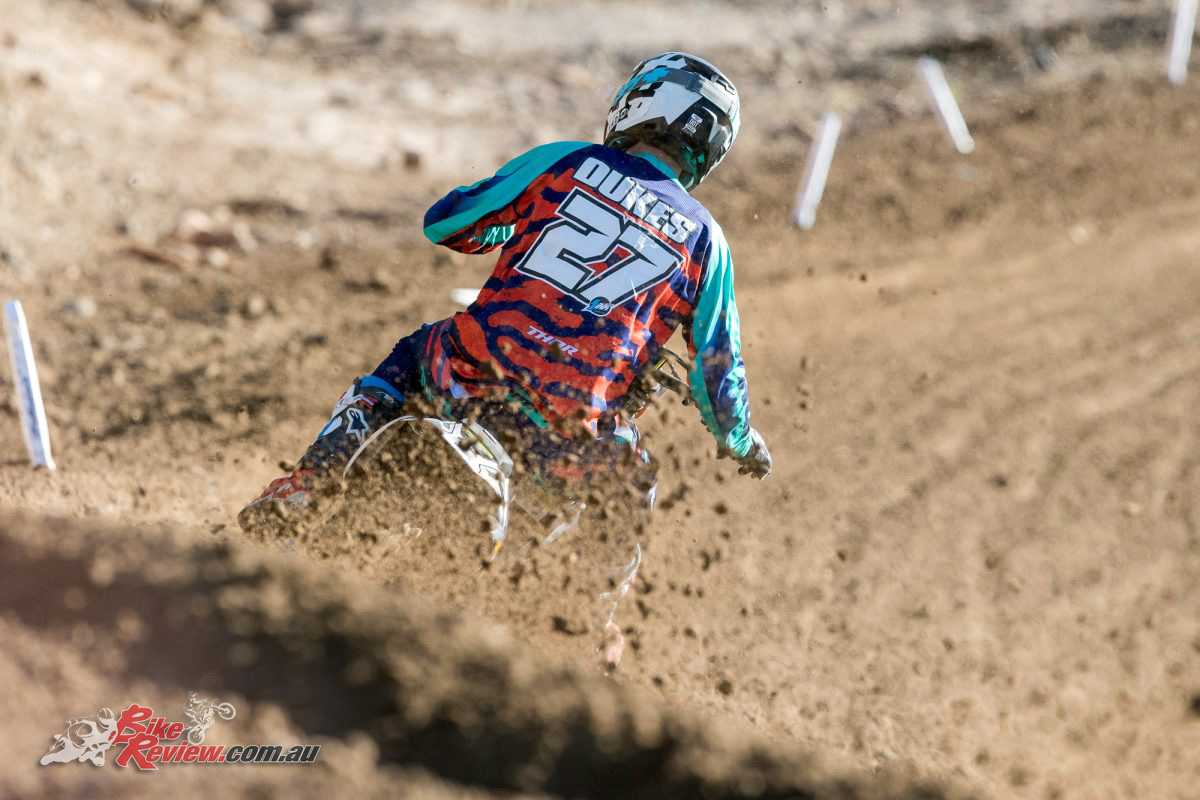 In the opening moto Cosford surprised everyone with a wire-to-wire victory, despite a desperate last-lap charge from Dukes. Dickson crossed the line in third, ahead of Ellis and Purvis.

The second race saw Malkiewicz claim his third win from the weekend’s four motos, enjoying a 3.1-second margin over the round victor Dukes and Dickson in third. McKay and Ellis rounded out the top five.