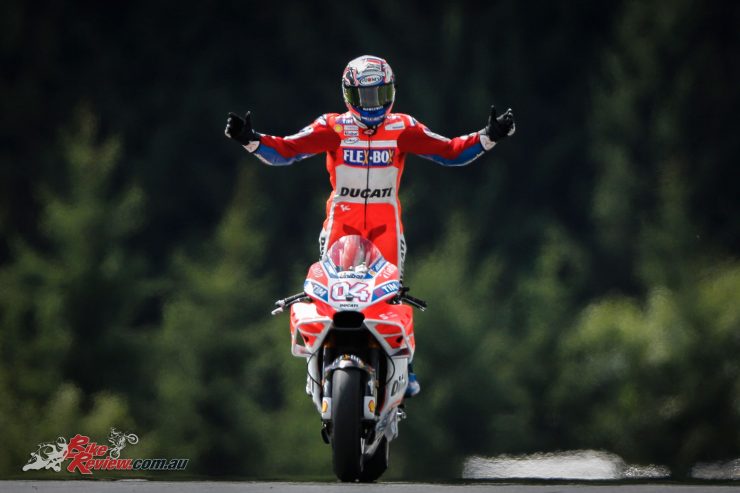 Dovizioso reigns at the Ring as Marquez second

Some races immediately enter the history books as the flag falls. The 2017 Austrian GP proves one such example, as Andrea Dovizioso (Ducati Team) and Marc Marquez (Repsol Honda Team) staged a showcase of the best of the sport, right down to the wire. 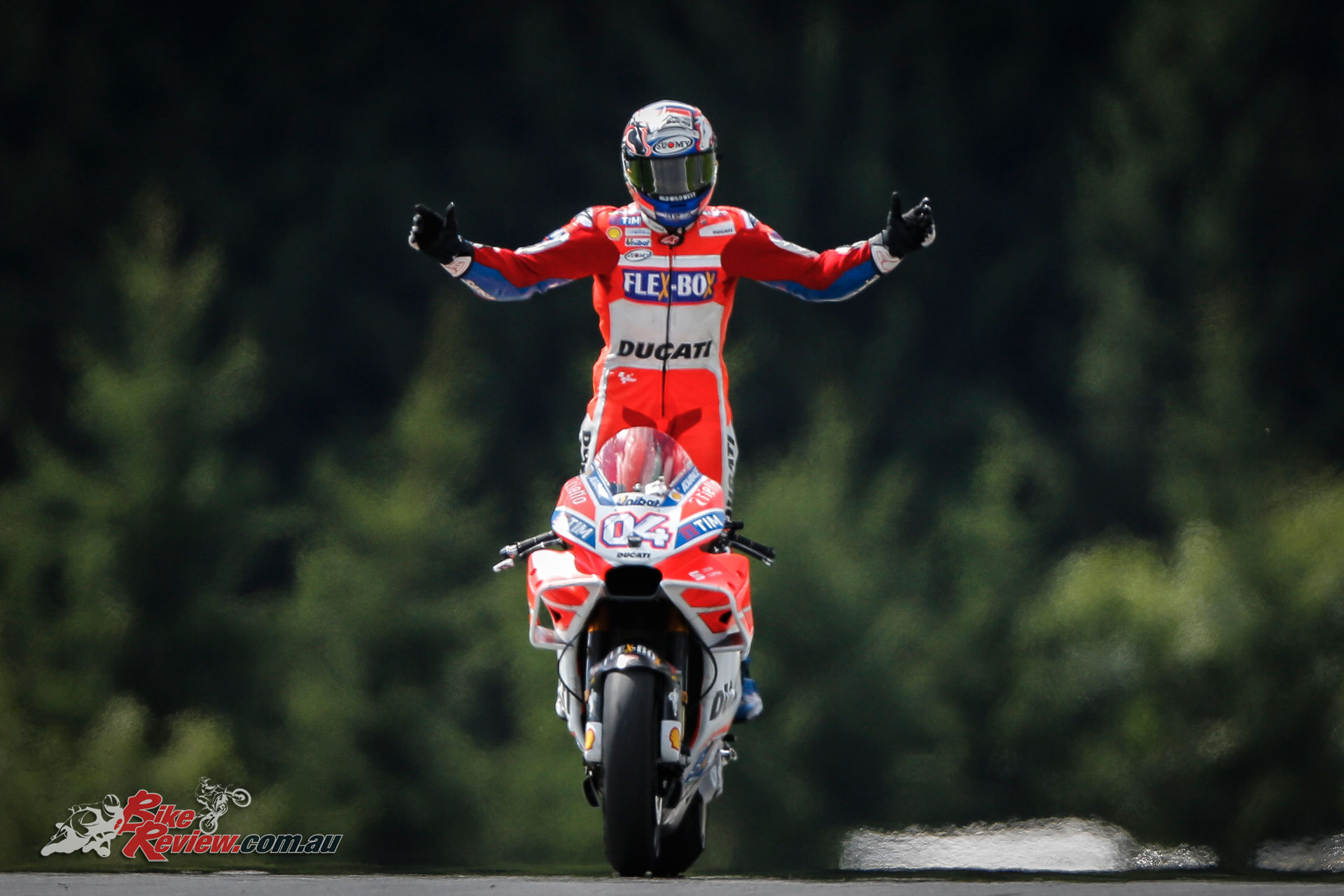 Almost side-by-side over the line, it was ‘DesmoDovi’ who took his third win of the year – with Marquez just keeping it on track for second in signature style. Dani Pedrosa (Repsol Honda Team) completed the podium, coming back from a Q1 hurdle on Saturday to make big points gains in the standings.

Polesitter Marquez took the holeshot, before a stunning move from Jorge Lorenzo (Ducati Team) saw him cut inside second-placed Dovizioso and then take Marquez on the exit – an incredible second ahead over the line at the end of Lap 1. 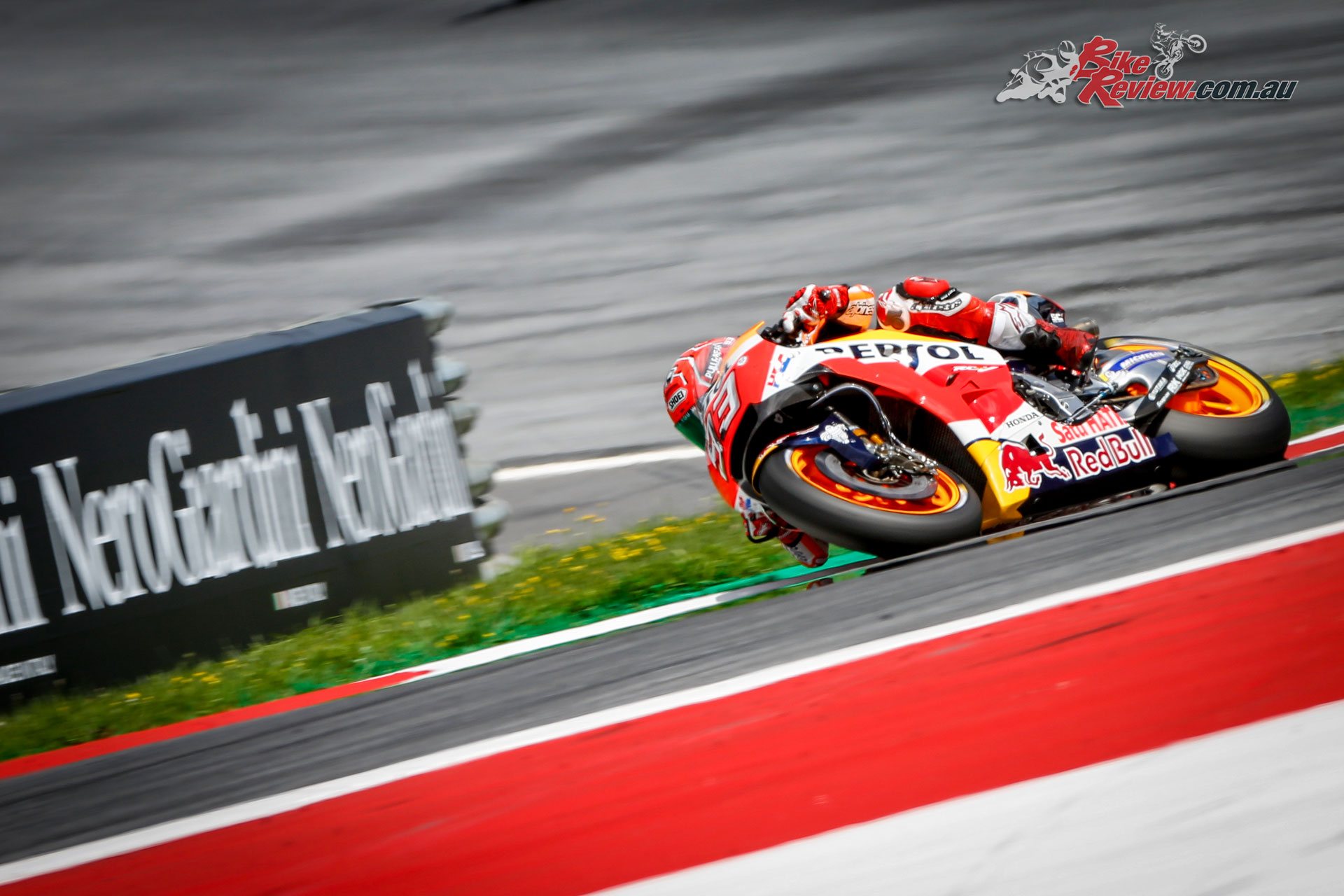 There was early heartbreak for Pol Espargaro (Red Bull KTM Factory Racing), who was forced to retire as his rear brake was damaged in an early incident – before Jonas Folger (Monster Yamaha Tech 3) was then also forced in. Danilo Petrucci (Octo Pramac Racing), who suffered a big wheelie off the line, was next to enter pitlane after a warning light on the dash.

Back in the battle, Viñales had run wide into Turn 1 to lose some ground and come back on track from the run off, with Lorenzo at the head of the race then being reeled in by Marquez. Soon, Marquez was the man to misjudge an apex – Turn 3 – with Dovizioso quickly pouncing to take over in second. 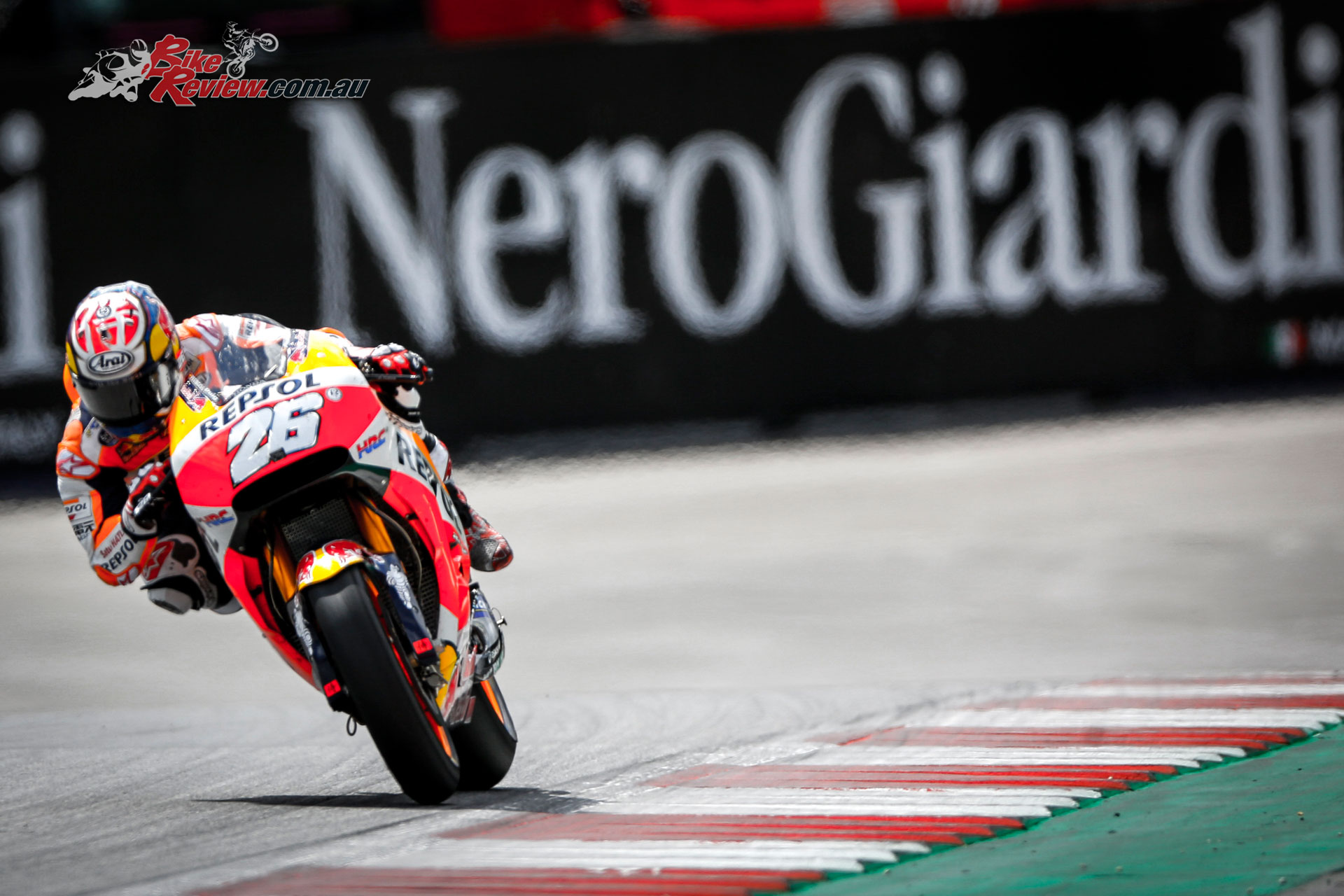 Meanwhile, Johann Zarco (Monster Yamaha Tech 3) had moved up to tag onto the front four, with Pedrosa the next man to join the party – making a train of five behind Lorenzo in the lead. Marquez then struck back against Dovizioso, with 18 laps to go and everything still in the air.

Some stunning action then shook up the lead as Lorenzo headed deep, Marquez cut inside – and Dovizioso then blasted past both as the three machines were almost neck-and-neck. But Marquez struck back, before an almost replica replay of the earlier trio saw Zarco run deep, Rossi pounce – and Pedrosa take both. Then it was Rossi’s time to run wide – off at Turn 1 and dropping back into seventh as he made his way back on track.

At the front, Marquez and Dovizioso had begun to pull away, and everything settled into what felt increasingly like the calm before the storm – and was proved exactly that.

Swapping places whilst keeping the pace searing, the two men fought it out until the end. Dovizioso, ahead as they crossed the line for the final lap, kept everything inch perfect as he waited for the move he knew would come. Marquez, for his part, couldn’t make a much-used Turn 7 move this time around, and the corners were counting down. 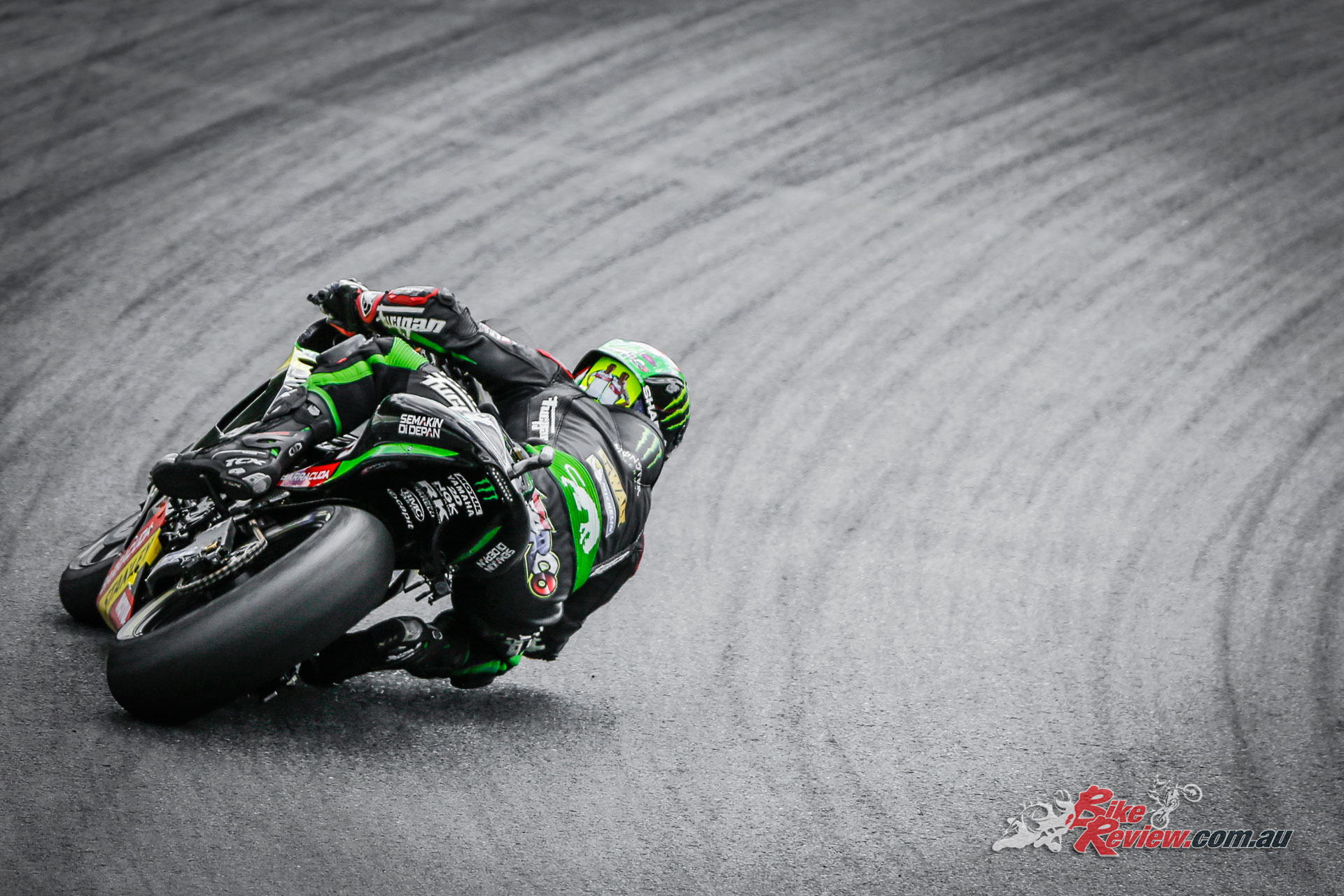 Almost a flash of unified colour around the penultimate corner, breath was held as the moment arrived – and so did Marquez. Lunging for the inside on the final corner and then sliding out just wide, the reigning Champion was spectacular – but it wasn’t quite enough, with his Italian rival cutting back inside to cross the line for his third win of the year.

Pedrosa completed the podium after some solid pace, taking Lorenzo and at one point in striking distance of the lead. The number 26 also moved to within only two points of Rossi in the standings. Zarco took fifth after holding off Viñales and coming home top Yamaha, with Rossi crossing the line in P7.

Alvaro Bautista (Pull&Bear Aspar Team) had a stunning Sunday comeback to take eighth, able to pull clear of another impressive performance from Loris Baz (Reale Avintia Racing) in ninth after the Frenchman also made it through directly into Q2.

Despite early heartbreak for Pol Espargaro, there remained something impressive to cheer for Red Bull KTM Factory Racing at their first home GP – with wildcard test rider Mika Kallio riding a superb race into tenth. The second consecutive top ten finish for the Austrian marque, the Finn was also only a tenth off Baz in ninth. 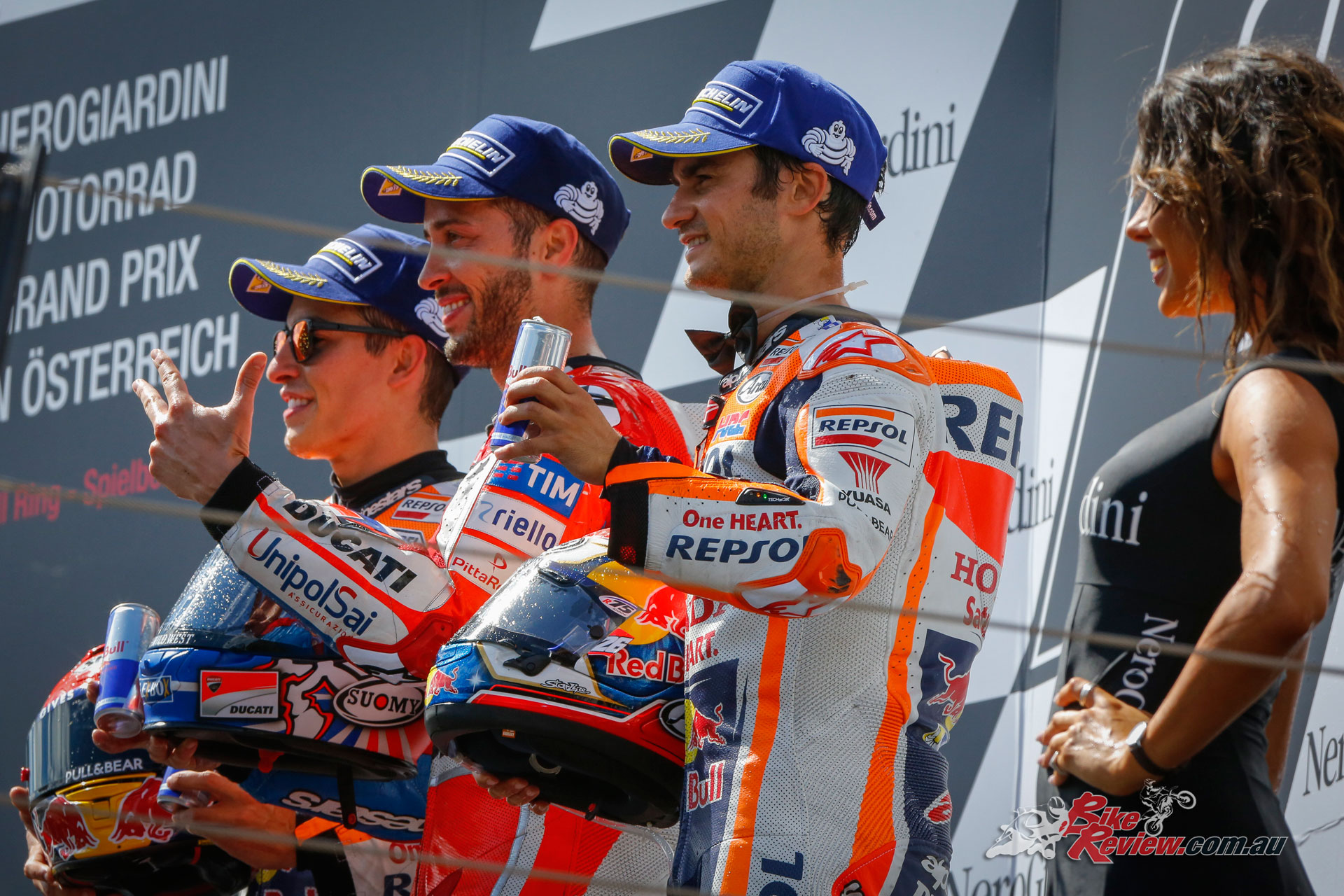 After the NeroGiardini Motorrad Grand Prix von Österreich, Marquez remains ahead on the road to Silverstone, but it’s now Dovizioso hot on his tail – 16 points adrift. Viñales, after Austria, moves out the top two in the Championship for the first time this season – and Pedrosa is now within two points of Rossi. The British GP will not disappoint.

Seven out of 11: ‘Fast Franco’ did it again in Spielberg

Franco Morbidelli (EG 0,0 Marc VDS) took his seventh win of the season at the Red Bull Ring, staying calm under pressure and fending off teammate Alex Marquez and key Championship rival Tom Lüthi (CarXpert Interwetten) to then pull away before the flag. Marquez and Lüthi had a dogfight for the podium, with the rider from Cervera taking P2 after some seriously close racing. 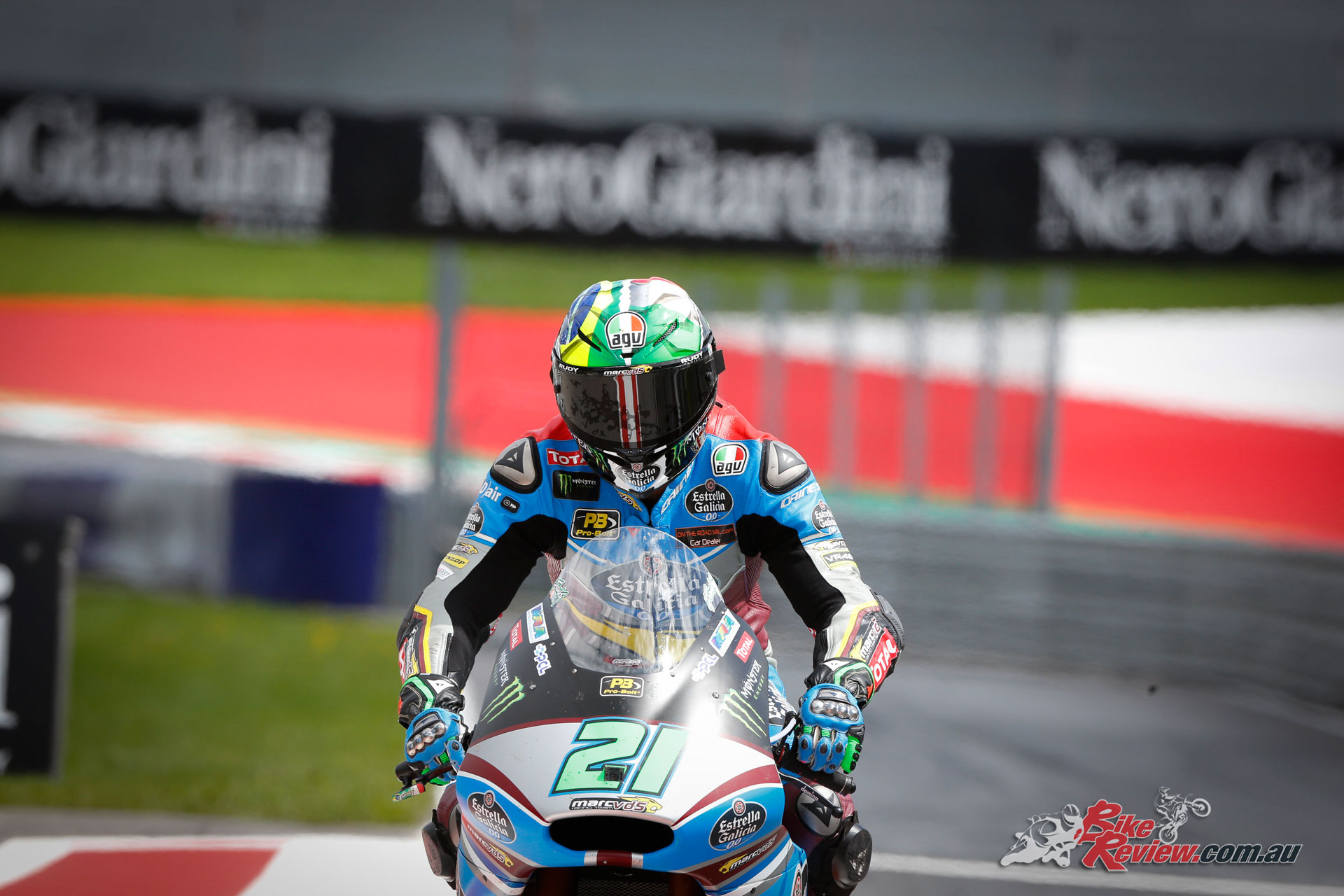 The best start from the front row saw Morbidelli head away in the lead, before drama hit the pack further back and two separate incidents saw nine riders sliding out of the race. Ahead of the melee, Lüthi moved through into second and then set about catching the Championship leader – moving through, heading wide and the front four, including Marquez and polesitter Mattia Pasini (Italtrans Racing Team), already pulling away in a lead group.

Morbidelli held firm ahead of teammate Marquez in the early stages, as Lüthi looked for a way through on the Spaniard from third. Pasini then dropped back from the lead trio after heading wide, but held fourth as Miguel Oliveira (Red Bull KTM Ajo) pounced on Francesco Bagnaia (Sky Racing Team VR46) at Turn 3 just behind.

There was more movement in the top ten as Takaaki Nakagami (Idemitsu Honda Team Asia) closed in on Brad Binder and Isaac Viñales (BE-A-VIP SAG Team) for seventh, before the Spaniard then crashed out of contention.

Lüthi and Marquez continued their battle royale, swapping some paint and closing in on Morbidelli to within three tenths as Marquez kept cool under immense pressure from behind – but then the tables began to turn as the Italian in the lead began to pull away.

An incredible charge from Oliveira into potential podium contention then came to a high-speed end as the Portuguese rider suddenly highsided out – rider ok but leaving the fight for the win as a trio.Three soon became two, however, as Lüthi ran too deep at Turn 3 – leaving the EG 0,0 Marc VDS riders as a duo out front.

Morbidelli was able to cross the line in clear air for win number seven of the season after pulling the plug, as Marquez took a comfortable P2 behind him and Lüthi followed them home.

Bagnaia came home ahead of Pasini in P4 after a late charge, with Nakagami and Binder fighting it out for sixth and the Japanese rider just ahead over the line. Jorge Navarro (Federal Oil Gresini Moto2) took an impressive P8 as another rookie in the top ten, with Dominique Aegerter (CarXpert Interwetten) in ninth and an impressive comeback from Hafizh Syahrin (Petronas Raceline Malaysian) seeing him complete the top ten. 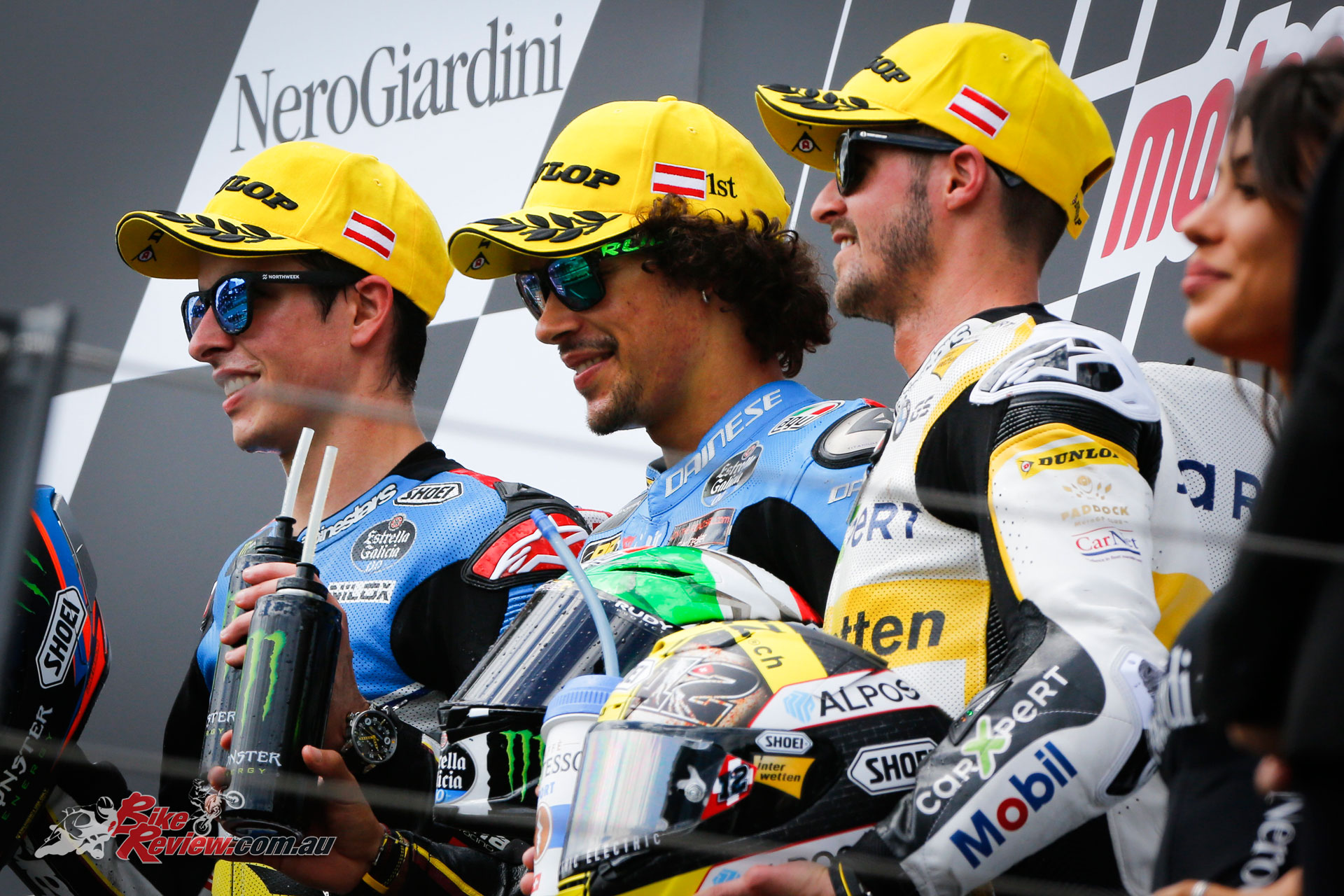 After some incredible overtakes in Austria, it’s now time for Silverstone – with Morbidelli a handful of points further ahead as the rounds begin to count down.

Moto3: A Mir masterclass, a Martin comeback and a stunning debut for Masia

Joan Mir (Leopard Racing) took a supreme victory at the Red Bull Ring from P10 on the grid, fighting his way through to the front and then uncatchable for his second consecutive victory at the venue – becoming the first rider in the lightweight class since Valentino Rossi in 1997 to win seven or more races from the first eleven. 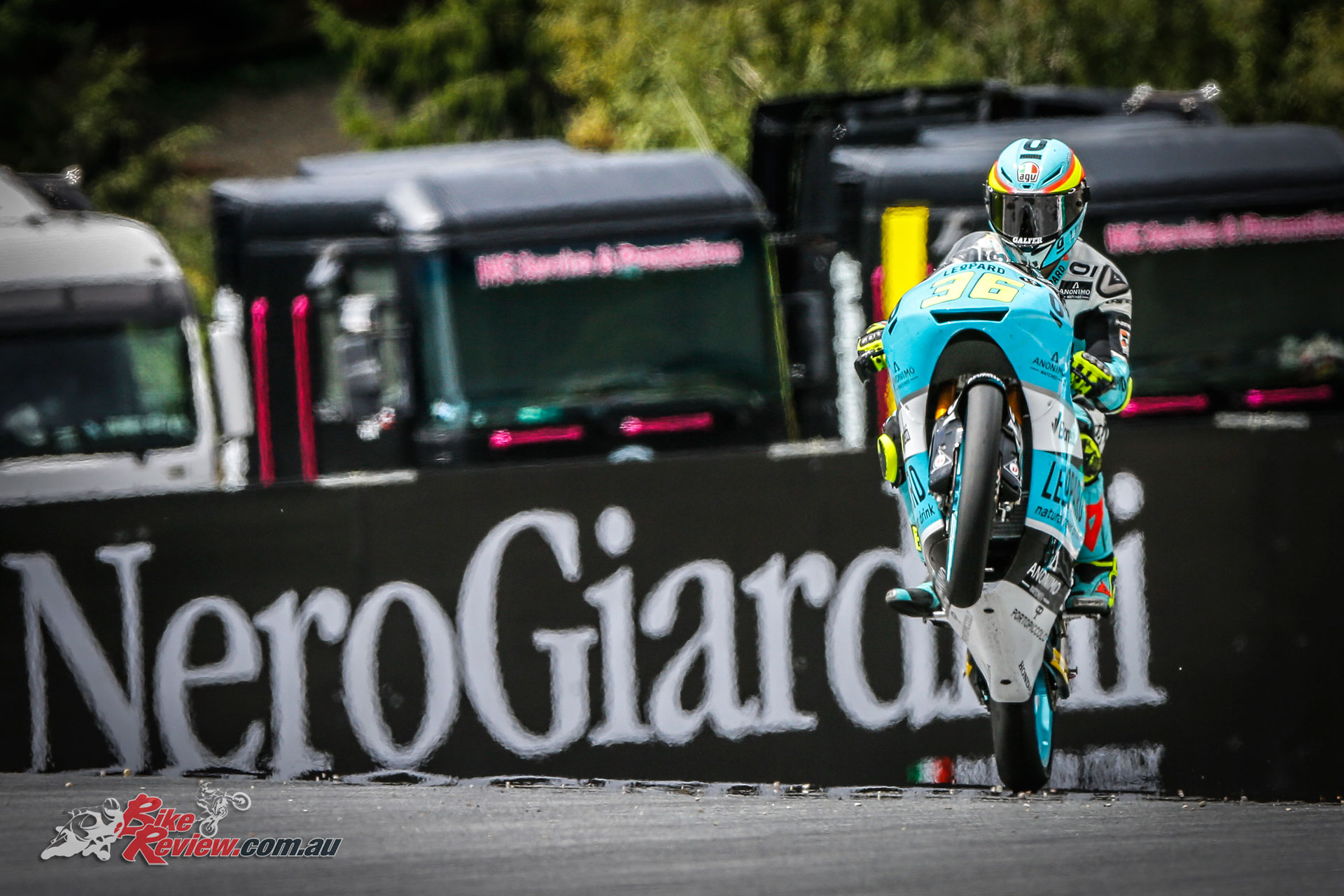 Philipp Oettl (Südmetall Schedl GP Racing) took an impressive second at a track he considers akin to a home venue, with Jorge Martin (Del Conca Gresini Moto3) pushing through the pain barrier to stage a stunning comeback from injury in P3.

At lights out, RBA BOE Racing duo Gabriel Rodrigo and Juanfran Guevara both got good starts at the head of the grid, with Guevara into the lead before John McPhee (British Talent Team) took over by Turn 3. Then initial superstar Bo Bendsneyder (Red Bull KTM Ajo) moved through, and the early scuffle saw points leader Mir unable to move up far from P10 on the grid – a good omen for the rest of the grid.

Soon, however, the Majorcan began to claw his way back through the field, joining McPhee, Martin, Bendsneyder and Rodrigo at the front – but Oettl had other plans, starting to pull the gap back and creating a classic Moto3 freight train at the front as he brought some company along for the ride.

Mir then began to pull a gap as the front group behind him began to fight, allowing him to escape – with an incredible battle for the podium raging behind. Two men then exiting the battle were Bendsneyder and McPhee, as the Dutchman went into Turn 1 too hot and collected the Scot.

With Mir clear in P1, Oettl began to pull the pin, with the same pace that saw him bridge the gap to the group allowing him to get some clean air. The German was able to stay ahead in the last few laps and keep himself in a safe second over the line for his first dry weather podium, as Martin dueled Livio Loi (Leopard Racing) and Aron Canet (Estrella Galicia 0,0) for the final rostrum place.

Incredibly, Martin completed the hard-fought fairytale through the pain barrier, taking third and then holding it over the line for an incredible return to the grid and the podium – hobbling in parc ferme afterwards; his healing leg far from 100% after a crash during the German GP.

Loi took fourth after some impressive pace, with Canet not quite able to repeat his Brno heroics and completing the top five. Fabio Di Giannantonio (Del Conca Gresini Moto3) took sixth, with polesitter Rodrigo bringing it home in seventh for a good haul of hard-earned points to add to his impressive qualifying pace of late. Adam Norrodin (SIC Racing Team) was another to convert promising pace into a great result; the Malaysian taking eighth at the flag.

One of the other headline performances of the day came from rookie Jaume Masia (Platinum Bay Real Estate), replacing injured Darryn Binder, who got up in the battle at the front and as high as second at one point – even setting a new lap record.

A true arrival onto the world stage, the Spaniard crossed the line in P9 at the flag for an awesome debut brought home in the top ten. Enea Bastianini (Estrella Galicia 0,0) completed that top ten for some good points, after also fighting a little further forward during the first few laps. 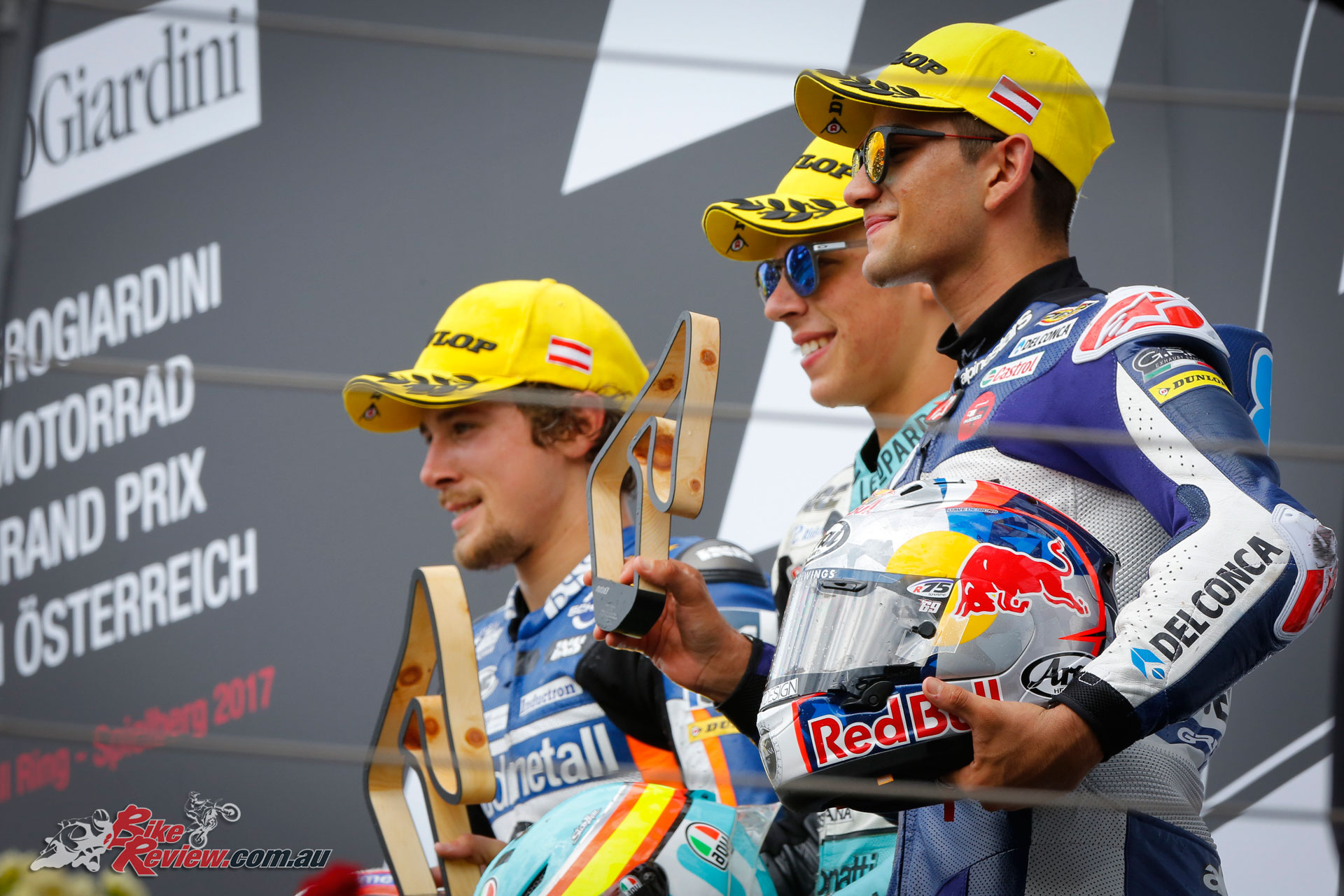 Nicolo Bulega (Sky Racing Team VR46) was 11th, ahead of a good comeback from outside the top twenty from Marcos Ramirez (Platinum Bay Real Estate). Romano Fenati (Marinelli Rivacold Snipers) crossed the line in P13 after running wide earlier in the race, making some progress but not able to crack the top ten. Juanfran Guevara was another early frontrunner to lose ground in fourteenth, with Japanese rookie Kaito Toba (Honda Team Asia) taking the final points position in P15.

Next it’s the expansive classic venue of Silverstone for the British GP, and another different challenge in two weeks.