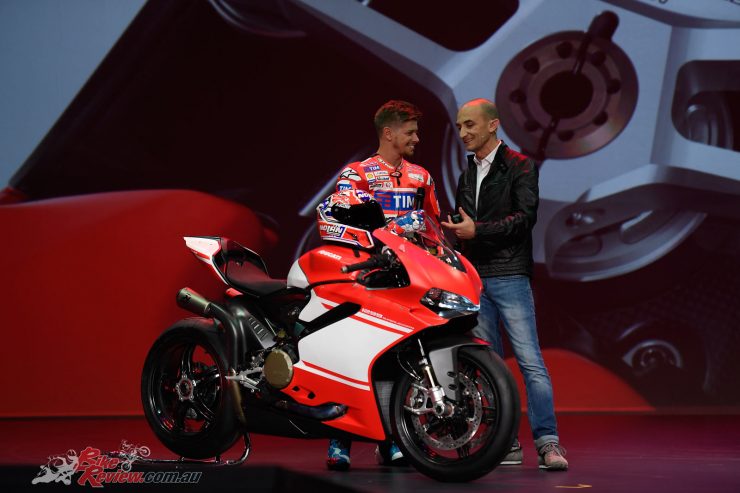 “More than Red: Evolution never stops” is the title of the Ducati World Première 2017. This key event has allowed Ducati to present – to both the press and thousands of fans – the six new motorcycles to be showcased at EICMA 2016. 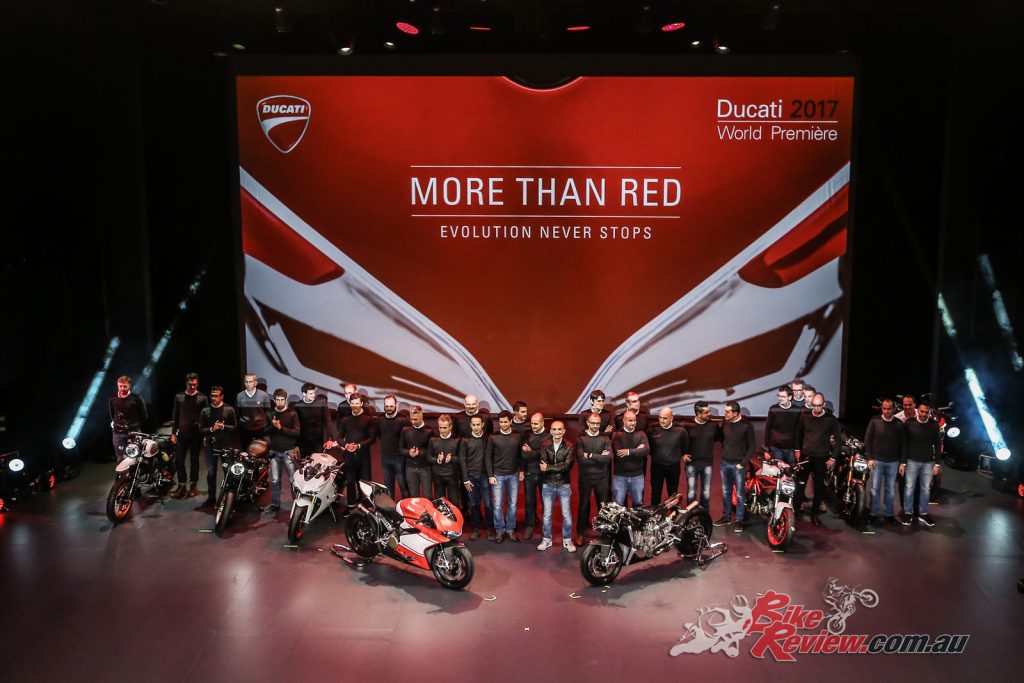 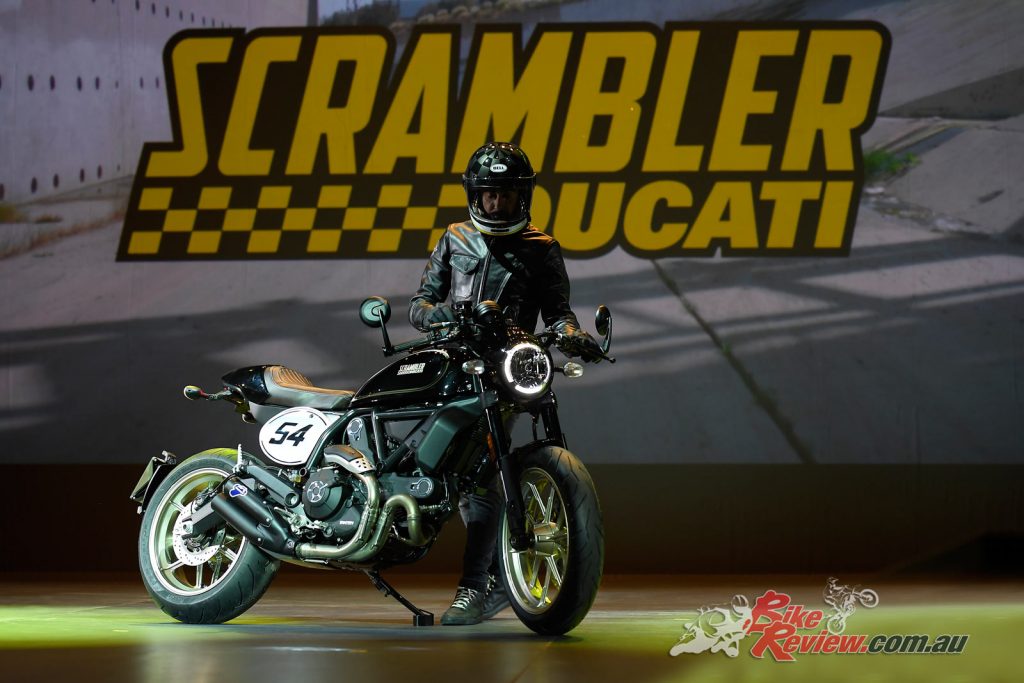 Buoyed by a record-breaking performance in 2016 which saw motorcycle sales break the 50,000 barrier – thanks to new products, innovative technology and future-oriented planning – it’s a solid, confident Ducati that heads to Milan.

“More than Red: Evolution never stops represents the very essence of Ducati 2017 as presented this evening”, stated Claudio Domenicali, CEO of Ducati Motor Holding. “RED for passion, performance, racing, and MORE to indicate a product range that continues to grow, including not only more accessible, differentiated models, but also unprecedented levels of service.” 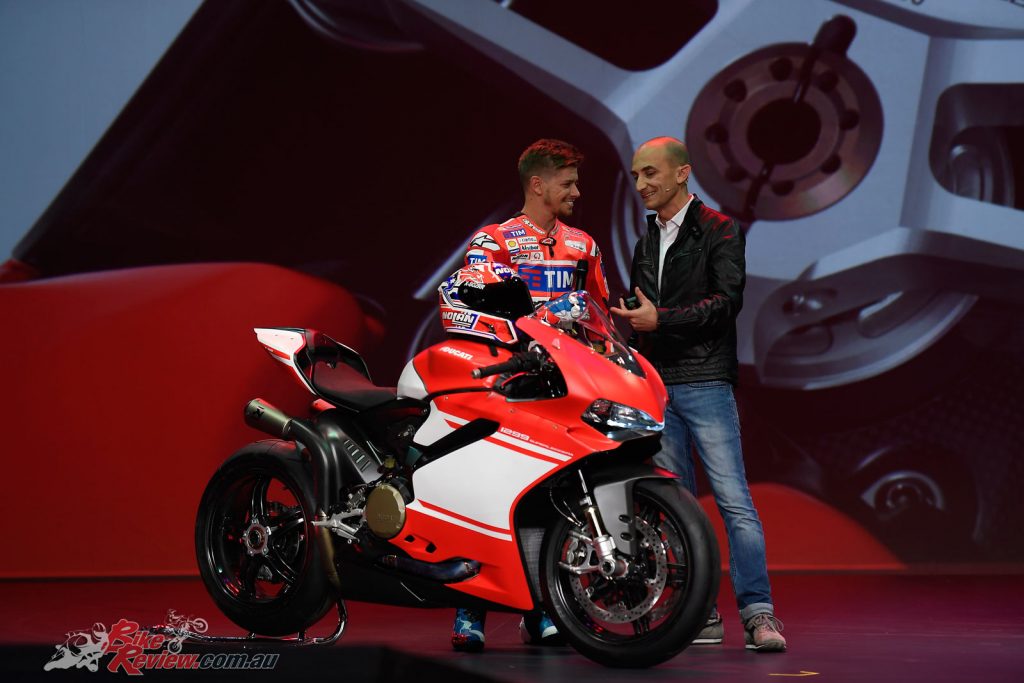 “A key example of this is the new used Ducati certification and warranty scheme, called Ducati Approved, which makes access to the Ducati world even easier by offering all the economic advantages of a used product but with assurance and guarantees on a par with those of new ones. To close what was a fantastic evening we also had Chaz, DesmoDovi and Casey, together with the most incredible bike ever built by Ducati, the 1299 Superleggera”. 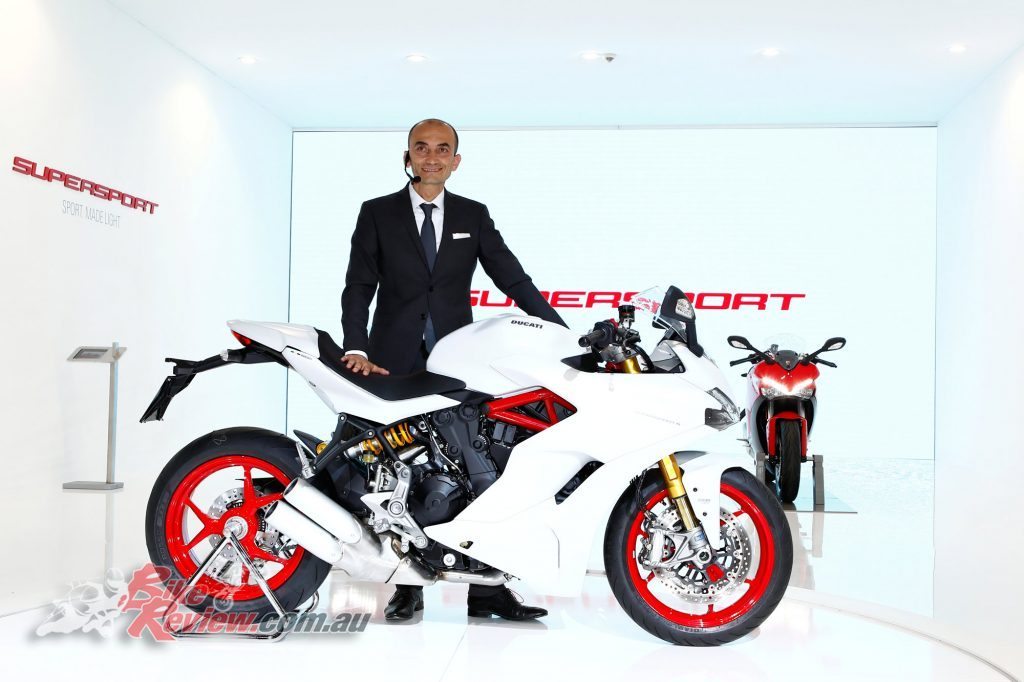 Taking centre-stage at the Ducati World Première 2017 were the new motorcycles that complete and extend the Ducati range for 2017. Of the eight new motorcycles set to join Model Year 2017, no less than six were unveiled on the eve of EICMA (preceded by the SuperSport, already successfully presented at INTERMOT 2016).

The eighth and last new bike, instead, will arrive in January 2017. During the Ducati World Première Claudio Domenicali announced a new deal with renowned clothing brand Diesel which – following the success of the Monster Diesel presented in 2013 – will see the arrival of a Diavel Diesel, a new, unique interpretation of this mutually rewarding partnership. 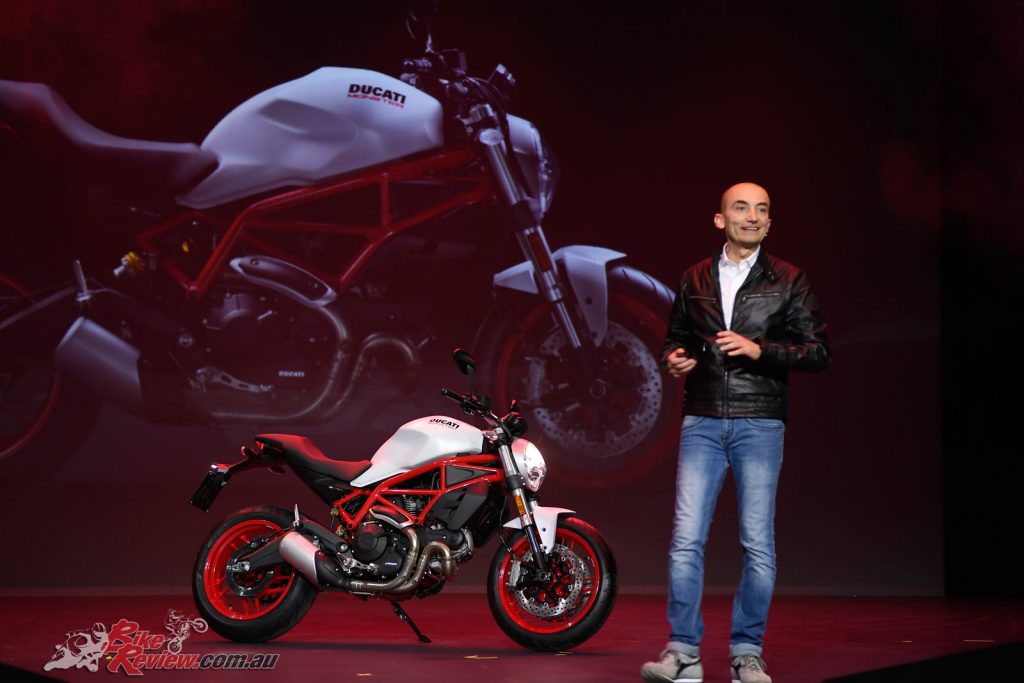 There’s only one motorcyle that’s instantly recognisable without having to check what’s written on the tank: the Monster. Much more than a bike, it’s an icon that, for an incredible twenty-four years, has defined both a segment and an original “made in Ducati” motorcycling philosophy.

For 2017 the Monster family is being renewed and extended with the arrival of the new 1200 and a fresh 797. The Monster 1200 is packed with new design and content, but retains that pure Monster essence. Shaping, silhouettes, fuel tank and headlight are faithful to the lines of the motorcycle that came out in 1993. 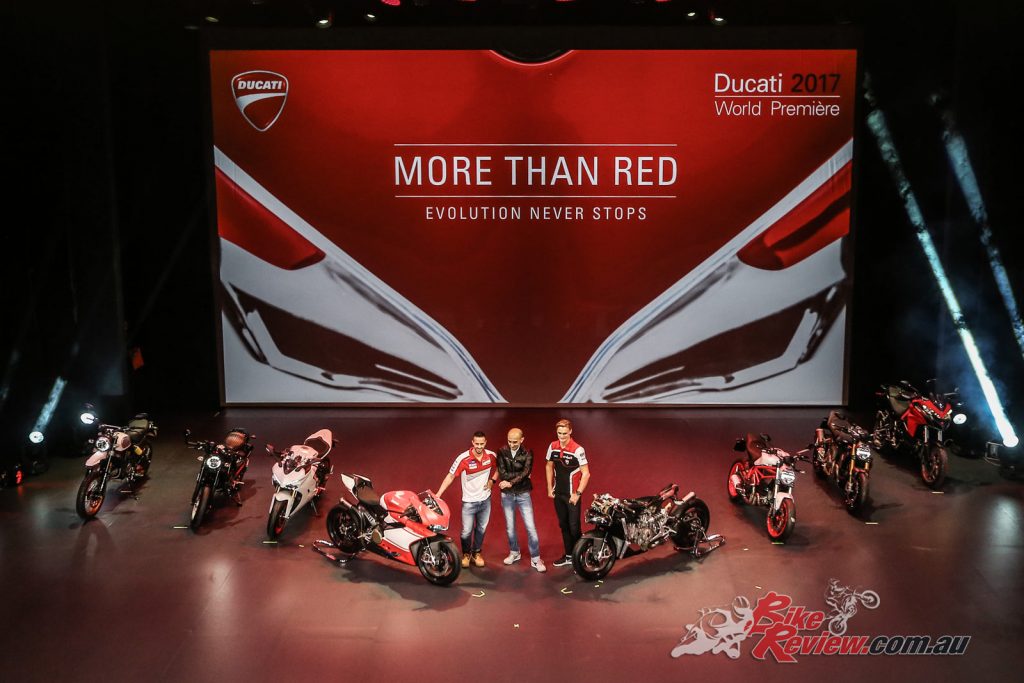 Available also as a higher-performance S version, the Monster 1200 has a sleeker tank, a fully redesigned sports-style tail, an all-new, technologically advanced headlight and a first-rate electronics package derived from the one on the 1299 Panigale.

Sporty, compact, essential yet incredibly stylish and up to date, the Monster 797 embodies all the allure of the Monster and represents the gateway to the Ducati world. Everything on the Monster 797 recalls the iconic ’90s bike but with cutting-edge modernity: from tank to Trellis frame, from air-cooled L-twin engine to the round headlight. 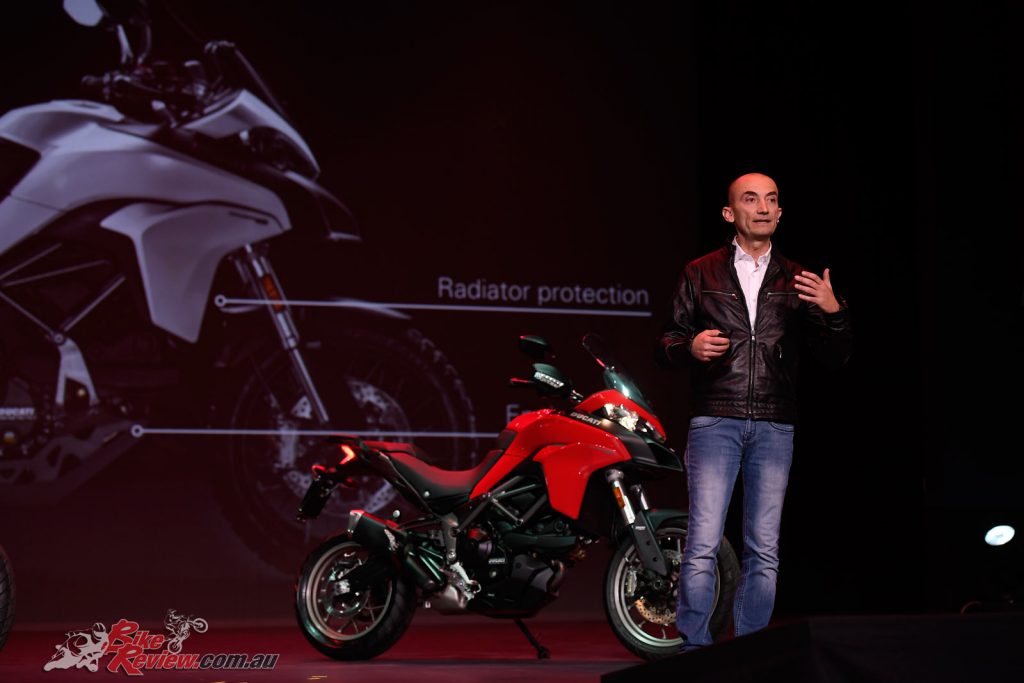 Another major new unveiling at the Ducati World Première 2017 regards the new Multistrada 950, the Bologna-based bike manufacturer’s smallest “multibike”, designed to provide all the excitement of the Multistrada in a more accessible, versatile way.

Designed to put great performance within everyone’s grasp, the Multistrada 950 is for those who want to get in some touring (and perhaps enjoy the company of a passenger) and those who want an agile fun bike that’s ideal for everyday use. 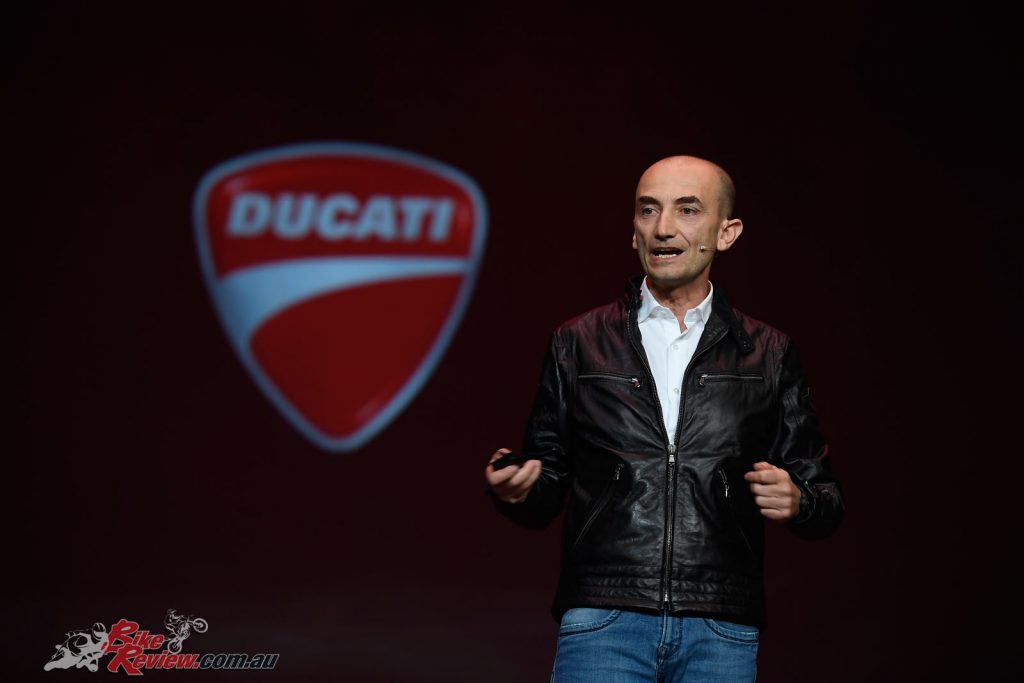 Ducati Scrambler will be at EICMA with two great new bikes, further extending the range of the new Ducati brand. The first is the Ducati Scrambler Cafe Racer, an interpretation of the legendary ’60s bikes that triggered a motorcycling revolution.

Free spirit and style: with its “Black Coffee” colour scheme, the Ducati Scrambler Cafe Racer takes us from the 1960s all the way to today’s Land of Joy. With 17’’ wheels and “racer” handlebars, the bike has also been given a complete rear-end re-design in pure Cafe Racer style.

The second exciting addition to the 2017 range is the Ducati Scrambler Desert Sled. A bike that evokes the spirit of the off-road American bikes of the ’70s and ’80s and extends the Scrambler range even further.

Thanks to the modified frame and suspension, the spoked wheels (19″ at the front) and alluring, ground-breaking lines, this bike is simply perfect for those who want to be able to get off the asphalt and take a less-beaten track – but always in that unique “Land of Joy” spirit.

The off-road capability of the Ducati Scrambler Desert Sled is also evident in the type-approved headlight mesh guard, the off-road style footpegs with removable rubber pads, the high mudguards (specially designed for this version) and, of course, the engine skid plate. 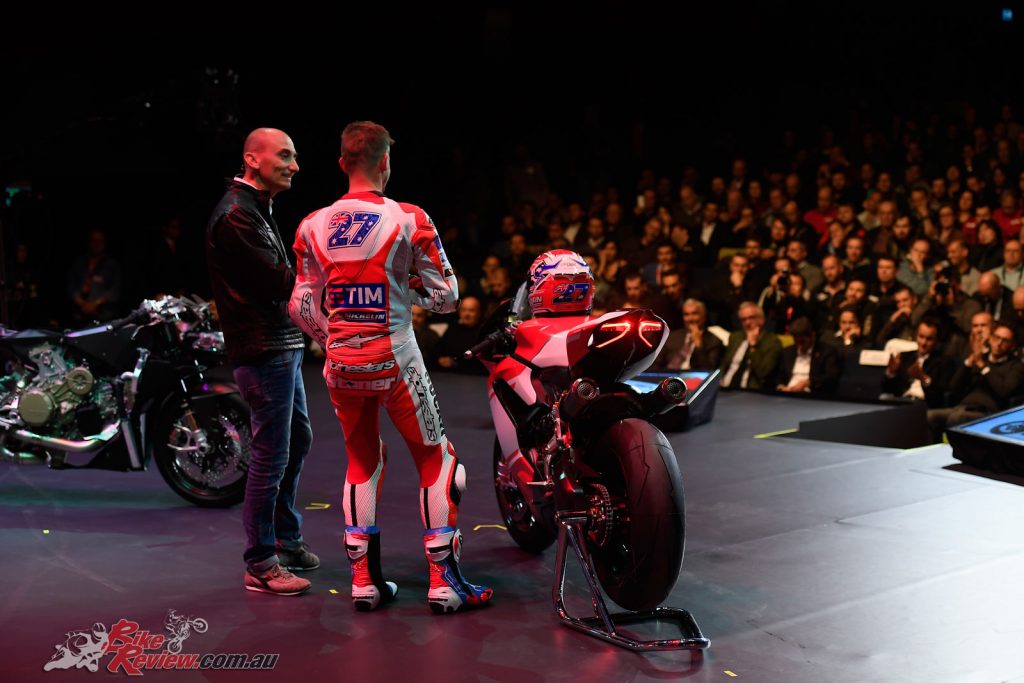 Casey Stoner with the 2017 Ducati Superleggera

The “grand finale” of the Ducati World Première 2017 came with the arrival on stage of the 1299 Superleggera, ridden by Casey Stoner, esteemed ambassador of this gem of design and technology. With the 1299 Superleggera, Ducati takes road sport bikes to unprecedented levels: it’s the first road bike to feature carbon fibre frame, swingarm, subframe and wheels.

It’s a concentrate of engineering, technology and performance – something which until now has never been implemented on a factory-produced model by a motorcycle manufacturer – in a limited edition of just 500 bikes. 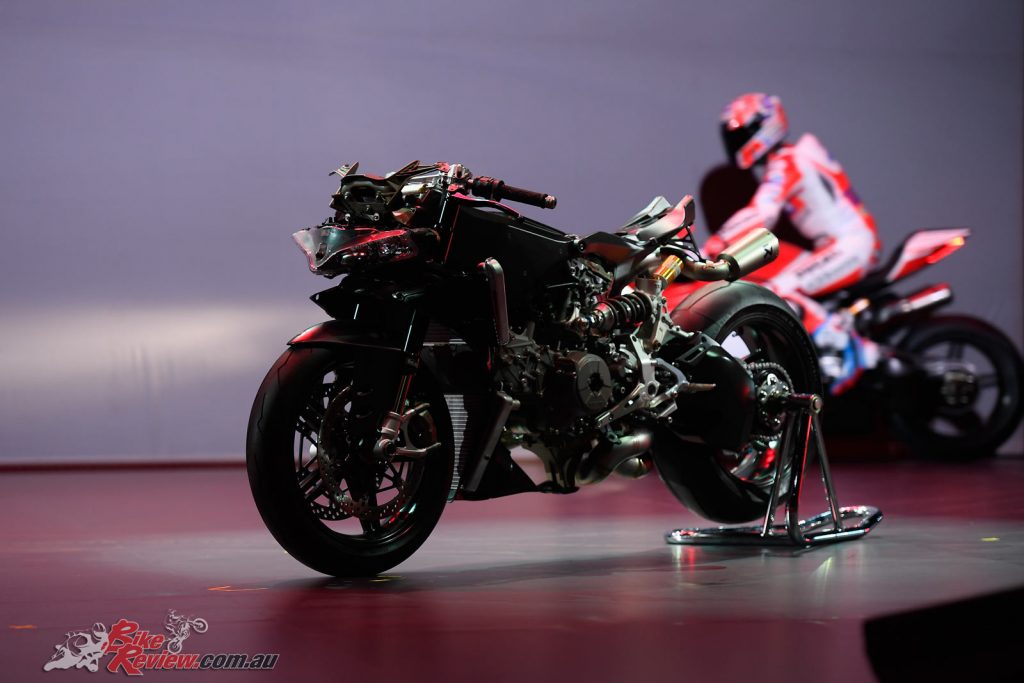 And underneath that carbon fibre skin lies the highest-performing version of the Superquadro. Thanks to its 215 hp (EURO 4 compliant), the desmodromic engine on the 1299 Superleggera is the most powerful factory twin-cylinder ever built; it incorporates the very highest levels of Ducati technology and is set to steal the limelight at EICMA 2016. 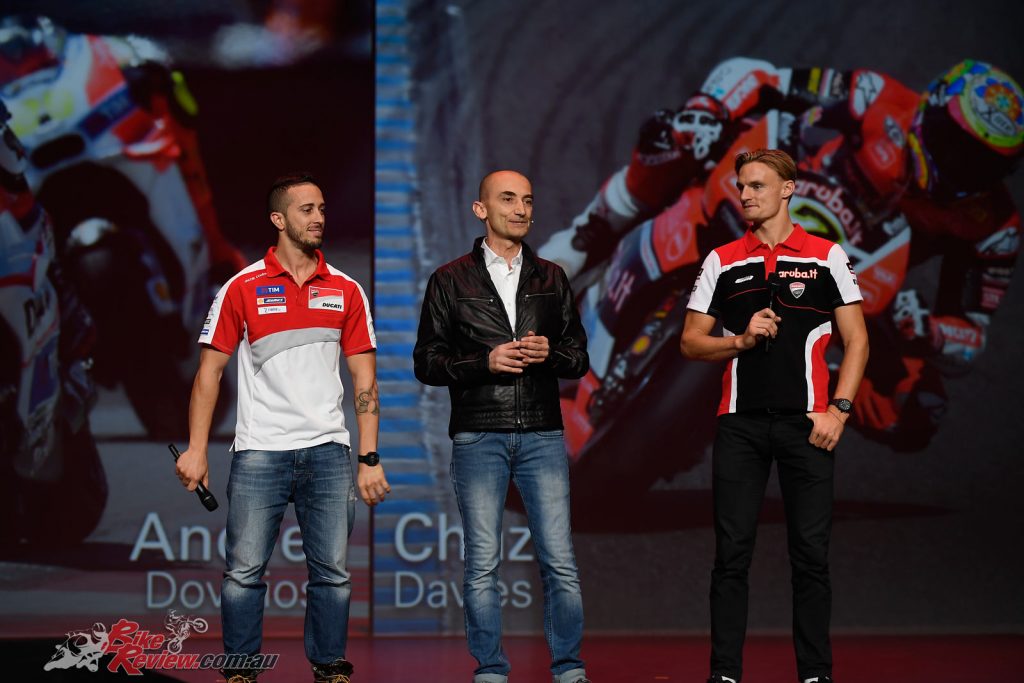