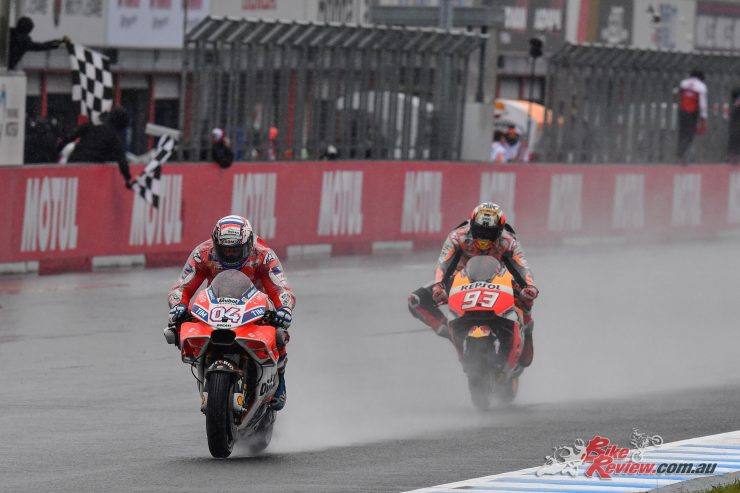 Dovizioso beats Marquez to the line

Duel of Champions: Dovizioso vs Marquez at Motegi

In pouring rain at the Twin Ring Motegi, Andrea Dovizioso (Ducati Team) and Marc Marquez (Repsol Honda Team) staged one of the greatest MotoGP duels of all time, putting everything on the line down to the final lap, and the final corner.

Despite the best efforts of the reigning Champion, it was Andrea Dovizioso who emerged victorious from ‘Victory’ corner in Japan – taking his fifth win of the season, the seventh of his career, and one of the most spectacular in history. Marquez was an incredibly close second, with Danilo Petrucci (Octo Pramac Racing) completing the podium. 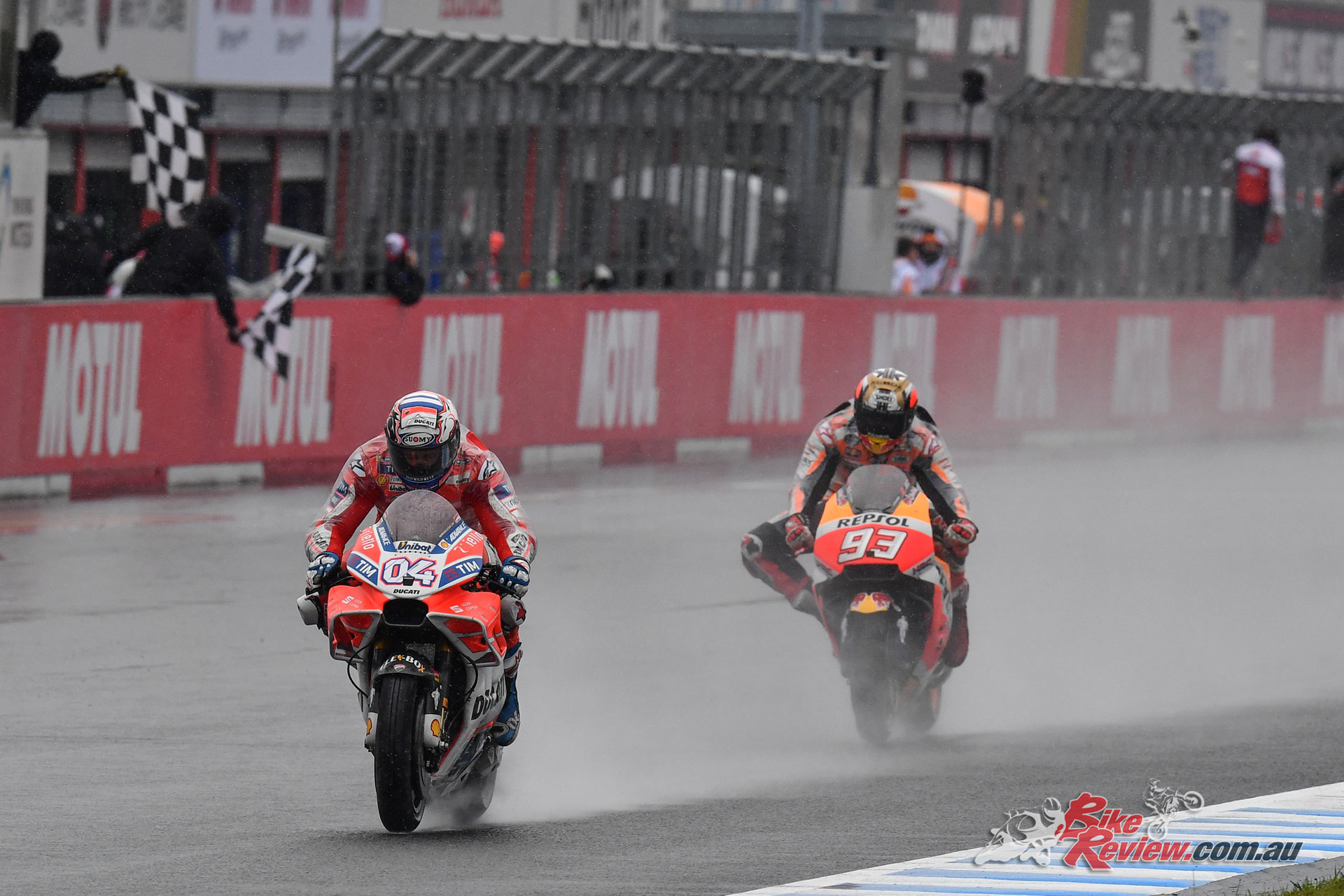 Dovizioso beats Marquez to the line

It was Marquez took the lead off the front row, with Jorge Lorenzo (Ducati Team) soon pouncing on the first lap to take second and then take over in the lead. Marquez was followed by Petrucci and Johann Zarco (Monster Yamaha Tech 3), with Dovizioso staging a stunning start to tag on the back. Marquez then fought back as Lorenzo moved back slightly, before Petrucci struck at the front and the trio who would head the remaining laps was decided: Petrucci, Marquez, and Dovizioso.

As the laps ticked down, the two title contenders remained locked together and Petrucci found some clear air in the lead. But with 12 laps to go Marquez made his first move to take over, with ‘DesmoDovi’ then through on his compatriot to keep close company with the Championship leader. They pulled away, and the stage was set. 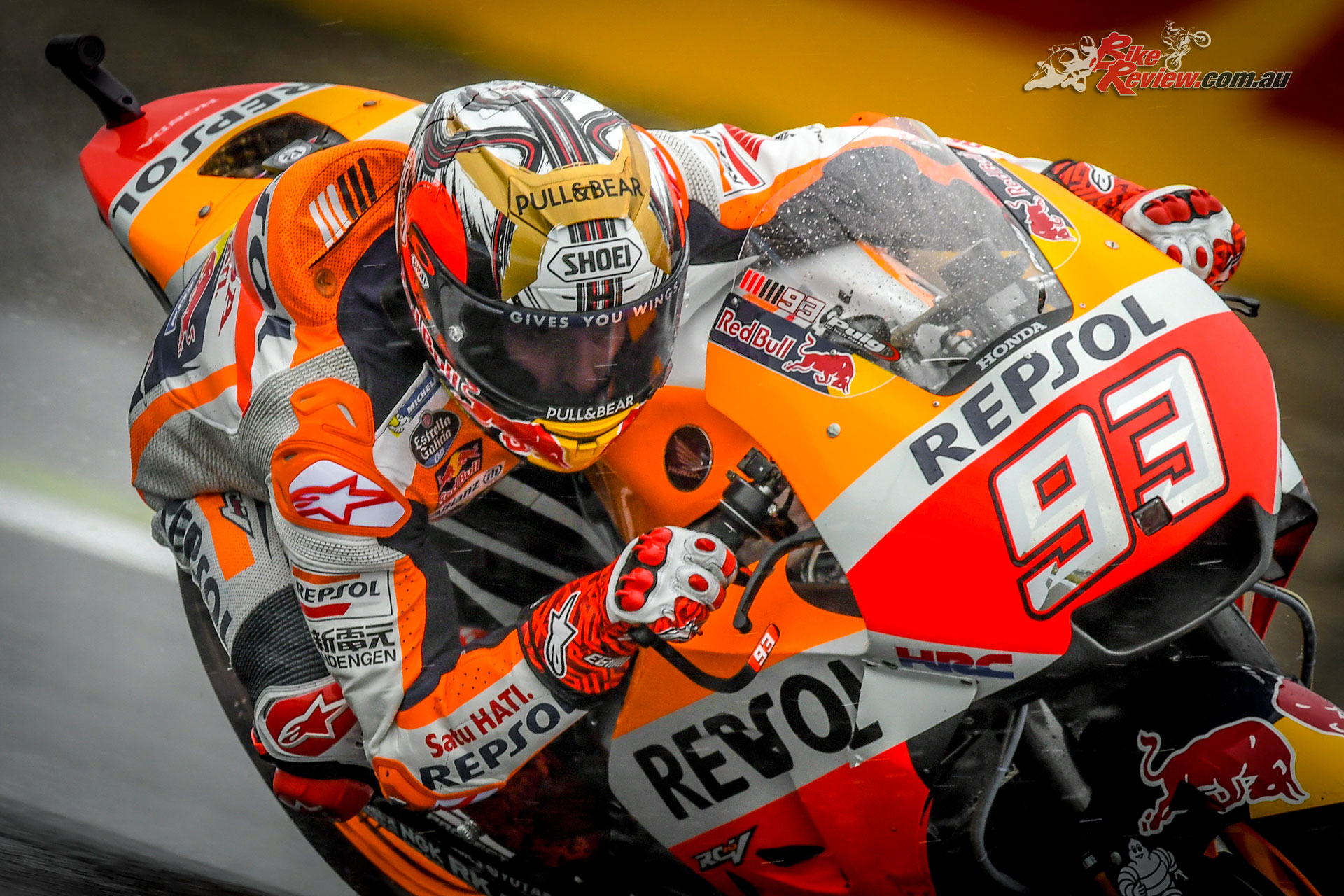 With six laps to go, Dovizioso attacked at Turn 6, and the cat and mouse continued. Marquez then hit back with a brutal pass in Turn 3 with three laps to go, and the fuse was lit. Dueling it out with some of the most spectacular racing of the season – and in the pouring rain – it seemed Marquez was holding the cards as the final lap approached.

Pushing hard to catch the race and Championship leader, the gap was hovering just over half a second for Dovizioso, until Marquez suddenly suffered a moment at Turn 8 and the Ducati was back on him. The Italian struck to take the lead soon after and prepared himself for the aptly-named victory corner – knowing the number 93 was close behind and undoubtedly with Austria on his mind.

The door didn’t prove closed for Marquez as he shot up the inside, but Dovizioso was prepared for the move and kept it together as the Repsol Honda headed wide. Almost neck and neck over the line, it was ‘DesmoDovi’ who took the victory in a duel that will go down in history – and he cuts the gap to 11 points at the top. 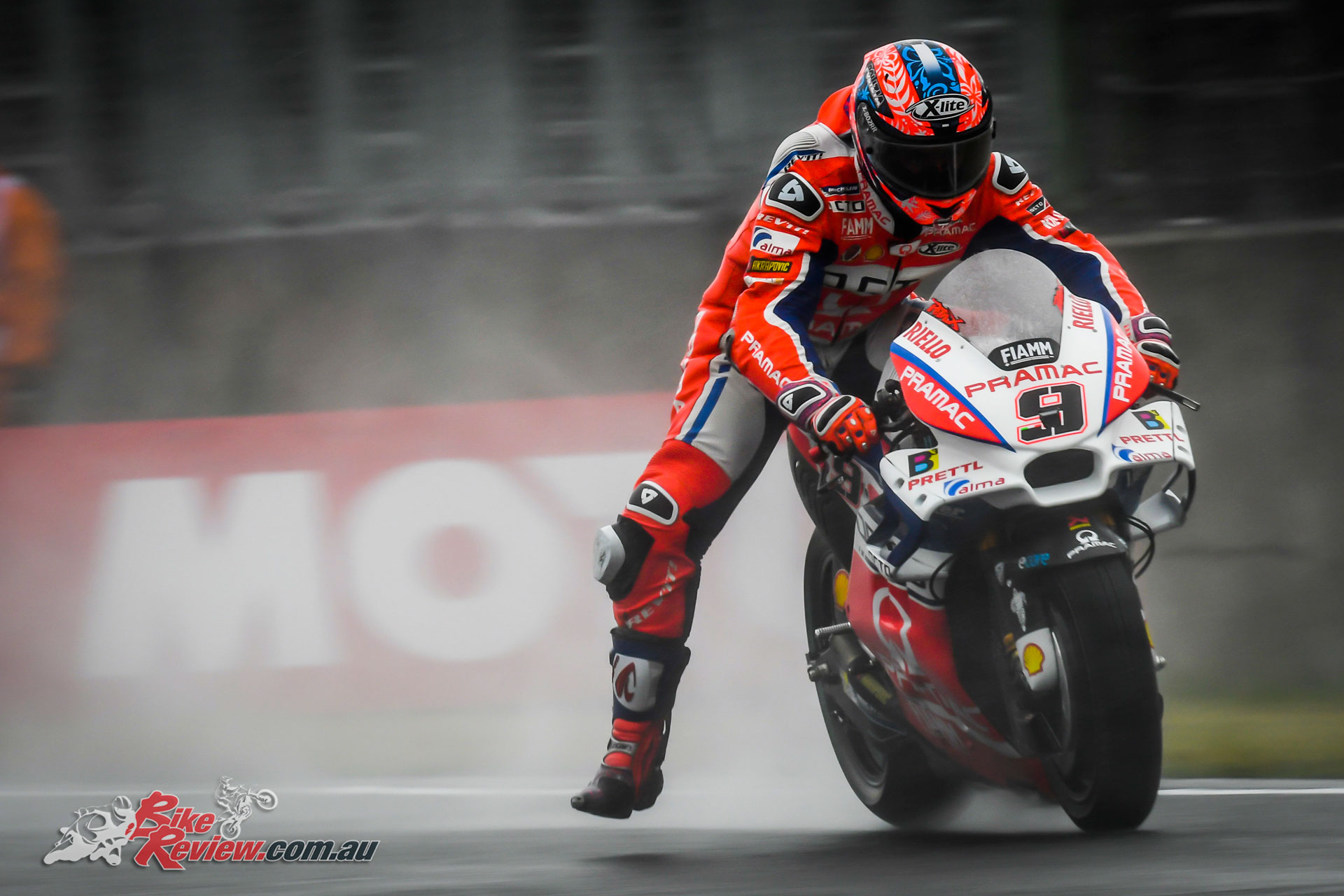 Behind the trio on the rostrum it was a stunning ride for Andrea Iannone (Team Suzuki Ecstar) into fourth, as the Italian picked his way through from P12 on the grid as was able to close in on his teammate Alex Rins, then getting past him in the latter stages. Rins was top rookie after his own display of brilliance, however, earlier shadowing Zarco and then moving through as the Frenchman faded.

After dropping back after a stunning start, Jorge Lorenzo was able to move back past those ahead of him to cross the line in sixth for another good haul of points – getting back Aleix Espargaro (Aprilia Racing Team Gresini) as his final victim, with the Spaniard coming seventh. Zarco faded in the latter stages to head home in P8, ahead of a difficult day for Maverick Viñales (Movistar Yamaha MotoGP). Viñales is now 41 points off Marquez at the top of the table.

Loris Baz (Reale Avintia Racing) completed the top ten as he sliced through in the rain, with Pol Espargaro (Red Bull KTM Factory Racing) taking another top result for the Austrian factory in P11. In twelfth, it was wildcard Yamalube Factory Racing rider Katsuyuki Nakasuga – 2017 Suzuka 8H winner and former MotoGP™ podium finisher – as the Japanese veteran impressed as ever. 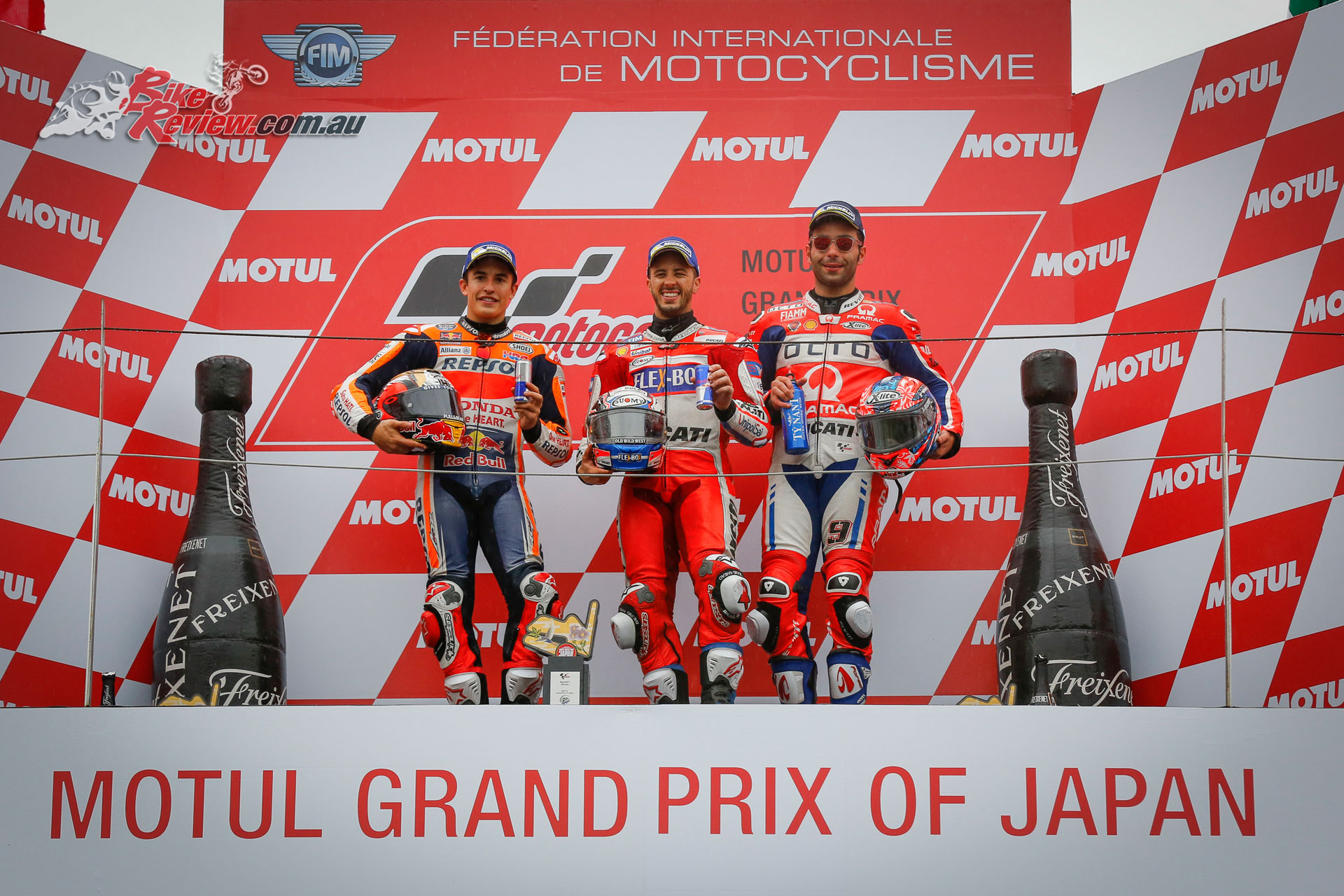 Now the Championship heads for the legendary Phillip Island, with the gap at the top now cut down to 11 points and three rounds remaining. Motegi was a duel that will go down in history, as will 2017. But with whose name engraved on the trophy?

Alex Marquez (EG 0,0 Marc VDS) put in a wet weather masterclass at the Twin Ring Motegi, taking his third Moto2 win at the track where he took his first World Championship victory back in 2013. Pulling away over the latter laps, Marquez was followed home by Xavi Vierge (Tech 3 Racing), who took his first podium, and Hafizh Syahrin (Petronas Raceline Malaysia) as the Malaysian took his second podium in three races. 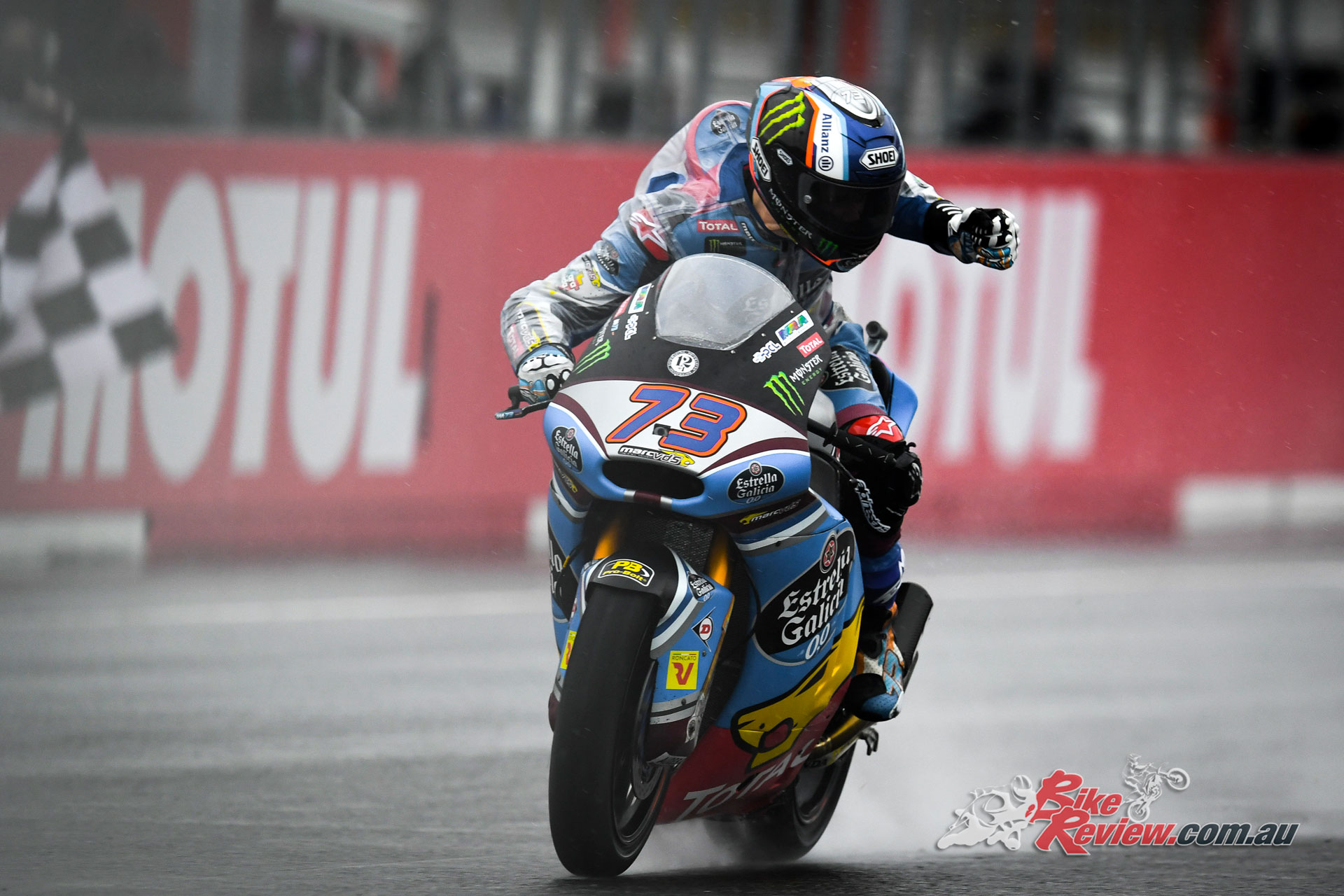 Polesitter and home hero Takaaki Nakagami (Idemitsu Honda Team Asia) got the best start from pole, and the Japanese rider was holding firm at the front as the pack shuffled slightly behind him – with Marquez for close company as the two were gradually able to pull away.

Marquez chose his moment to pounce to perfection, then pulling the pin once past Nakagami and beginning to disappear. He crossed the line a second and a half clear as the Japanese rider slipped backwards, with Vierge the leader of the chasing pack and able to hold off the incredible charge of Hafizh Syahrin.

With so much at stake for Morbidelli and key rival Tom Lüthi in the difficult conditions, the Championship remains largely unchanged as the Italian took P8 and the Swiss rider P11. Lüthi, initially off to a lightning start, then encountered visibility problems and a run off, regrouping to take some points and limit the damage.

Compatriot Dominique Aegerter (Kiefer Racing) dueled Morbidelli on the final lap but couldn’t quite get through, taking ninth, with Lorenzo Baldassarri (Forward Racing Team) completing the top ten – moving up an astounding twenty places from P30 on the grid. 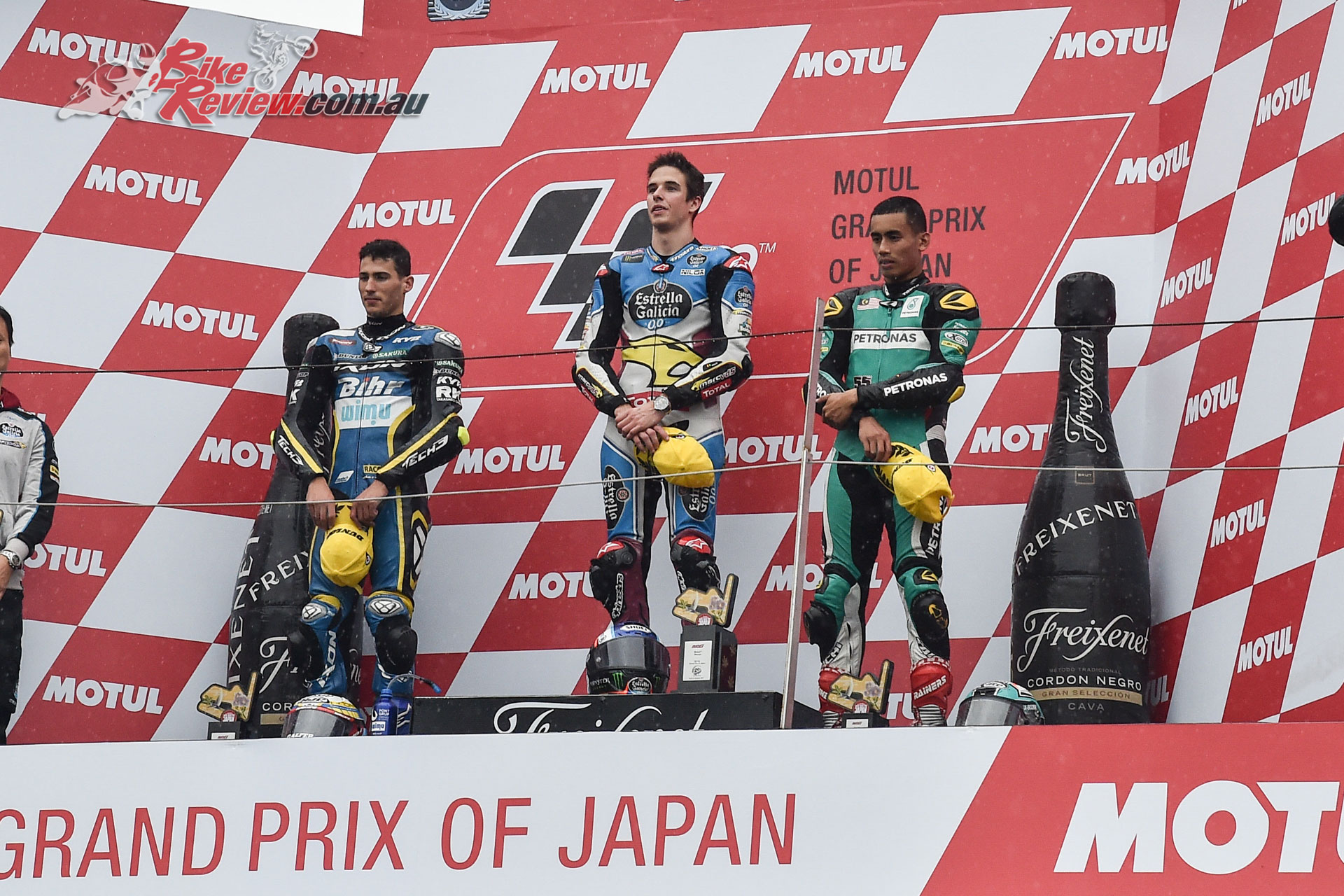 After the race there was a further shake up in the standings, however – with news coming through that Aegerter had been disqualified from his race result at Misano. That moves Tom Lüthi to within 19 points of Morbidelli instead of 24, as Phillip Island awaits.

Romano Fenati (Marinelli Rivacold Snipers) is now the Moto3 rider with the most wins since the class was introduced in 2012, taking his perfect tenth victory in incredible style at the Twin Ring Motegi. With wet weather all weekend, the race was no exception and Fenati once again showed his supremacy in the rain. 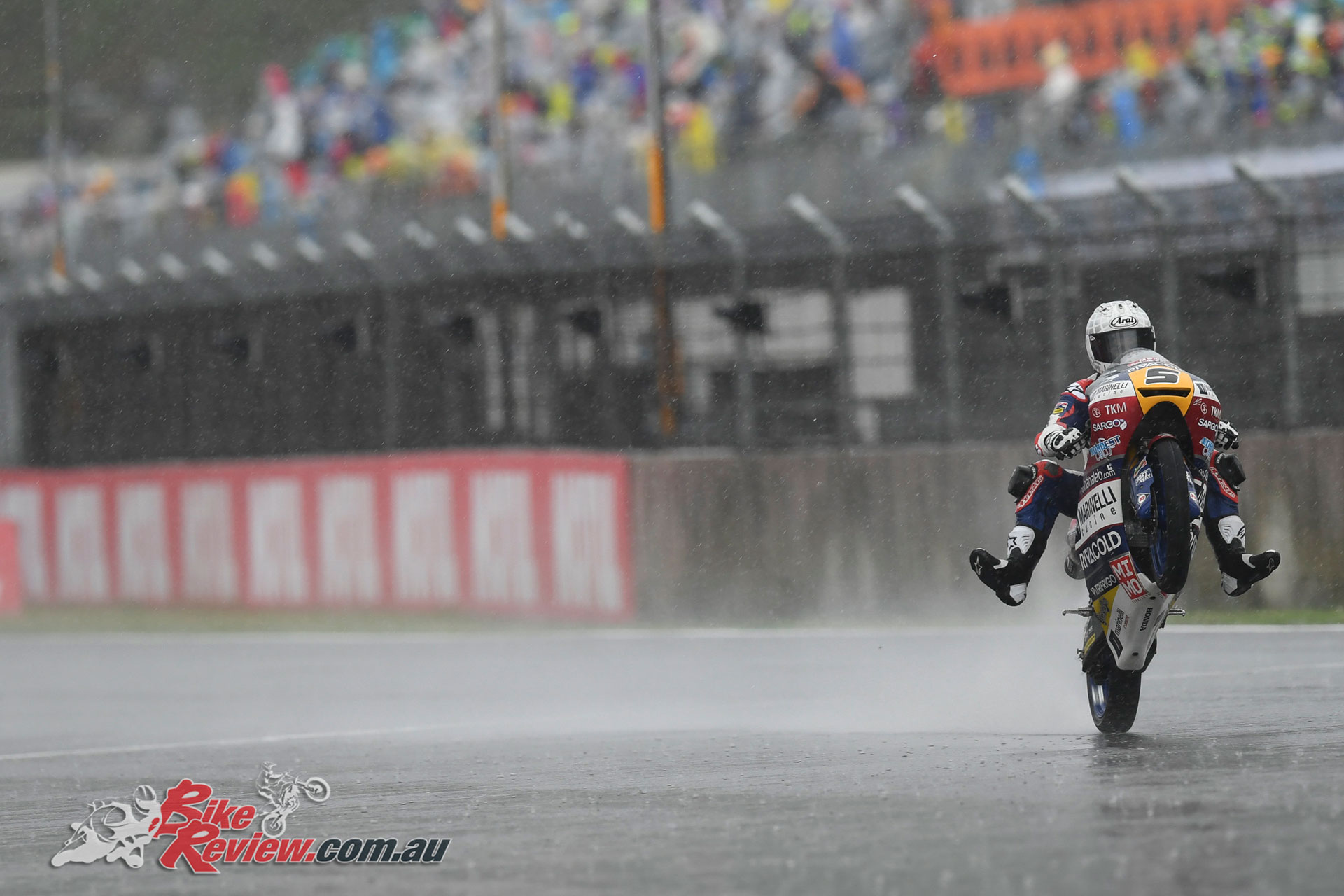 Niccolo Antonelli (Red Bull KTM Ajo) converted solid pace and a front row start into his first podium since the beginning of 2016 after an impressive ride to second, with Marco Bezzecchi (CIP) taking his first rostrum finish in third and making it three manufacturers on the podium: Honda, KTM and Mahindra.

It was Nicolo Bulega (Sky Racing Team VR46) who got the best start from pole, just getting into and through Turn 1 ahead of Antonelli, but the Ajo rider would soon strike back. Streaming through the rain on the first lap was a tough start to the day’s racing for the field, but two men would soon emerge from the spray: Fenati and Antonelli. After shadowing his compatriot and rival, Fenati was quick to strike and sliced through to take the lead – then able to disappear and cross the line four seconds clear.

Tatsuki Suzuki (SIC58 Squadra Corse) was in podium contention for some time in the initial stages before Bezzecchi began his charge, but the Japanese rider took P4 and his best ever Grand Prix finish – with home soil the perfect place to do it. Aron Canet (Estrella Galicia 0,0) was another initially heading for the podium, before fading slightly but crossing the line in a solid fifth in such tough conditions.

Philipp Oettl (Südmetall Schedl GP Racing) had a stunning ride through the field after a tough qualifying outside the top twenty, rounding out the top six just ahead of Fabio Di Giannantonio (Del Conca Gresini) and another man to slice back through the pack – Jakub Kornfeil (Peugeot MC Saxoprint). Bo Bendsneyder was ninth, with John McPhee (British Talent Team) putting in an impressive comeback from P17 on the grid to complete the top ten.

Nakarin Atiratphuvapat (Honda Team Asia) dropped back slightly on the penultimate lap to take eleventh, ahead of polesitter Nicolo Bulega – who crossed the line in P12 after recovering from a run off. Marcos Ramirez (Platinum Bay Real Estate), Andrea Migno (Sky Racing Team VR46) and Jorge Martin (Del Conca Gresini Moto3), who also suffered a run off, rounded out the points in the treacherous conditions. 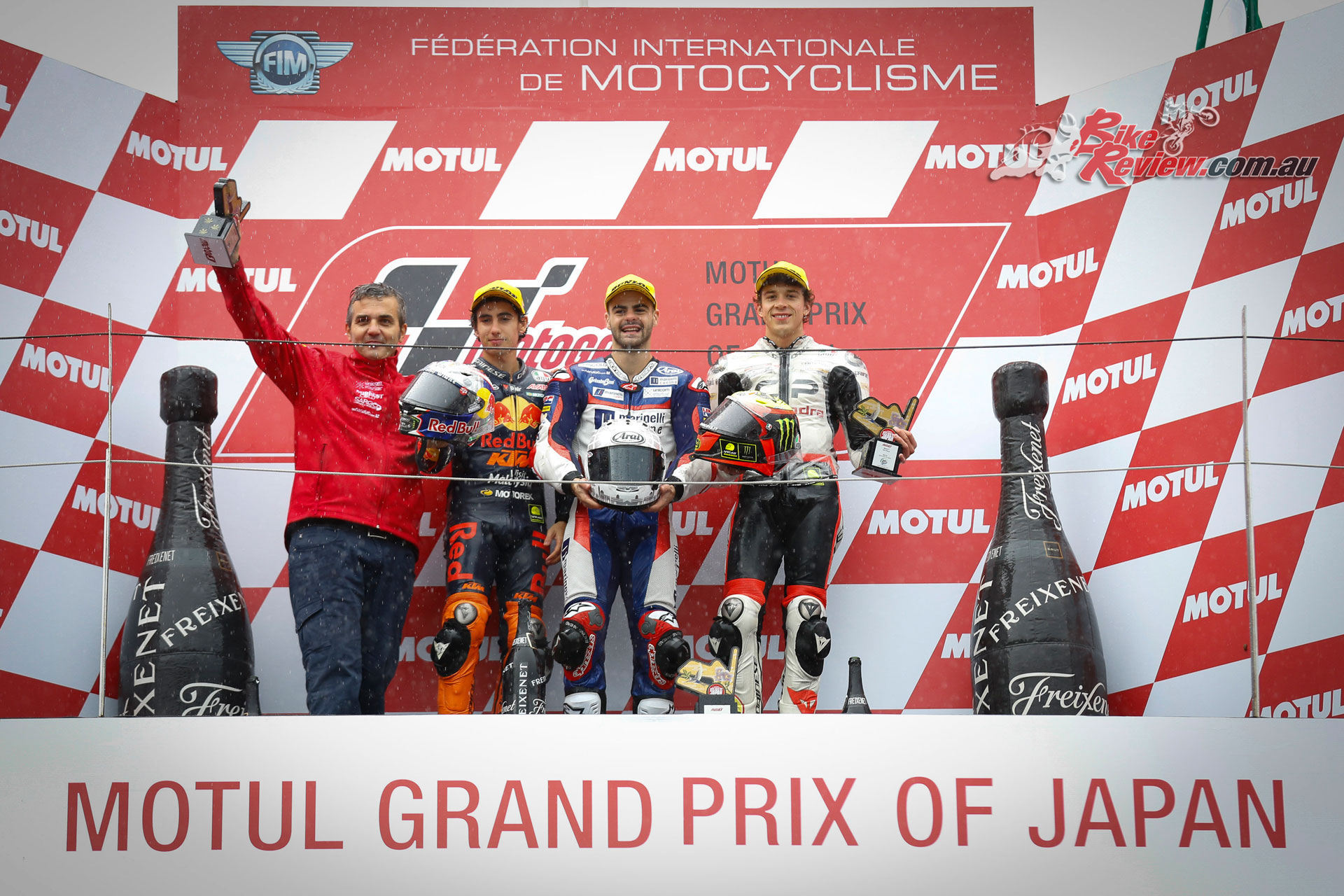 Now it’s Phillip Island time, and Fenati’s comeback remains a long shot in the Championship – 55 points behind now, and 75 remaining on the table.