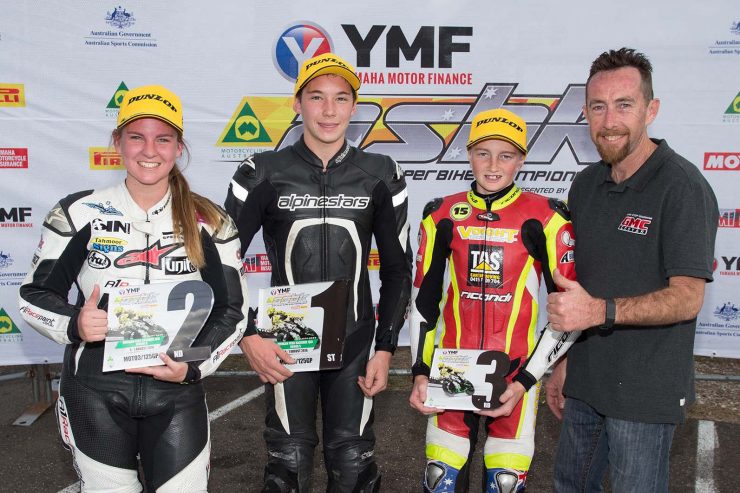 Edwards, Toparis unstoppable at ASBK Round 5

The Akrapovic Production class, Honda Moto 3/125 GP and Club Challenge categories provided plenty of excitement at Morgan Park today with another handful of riders rewarded with race wins at Round 5 of the Yamaha Motor Finance Australian Superbike Championship presented by Motul Pirelli.

With the Akrapovic Production class being the first competitors to hit the track this morning, riders were treated to cool circuit conditions for their second nine-lap race of the weekend, and with newcomer Tom Toparis (Up to 300cc) starting from Pole position, all eyes were once again on his Kawasaki machine. 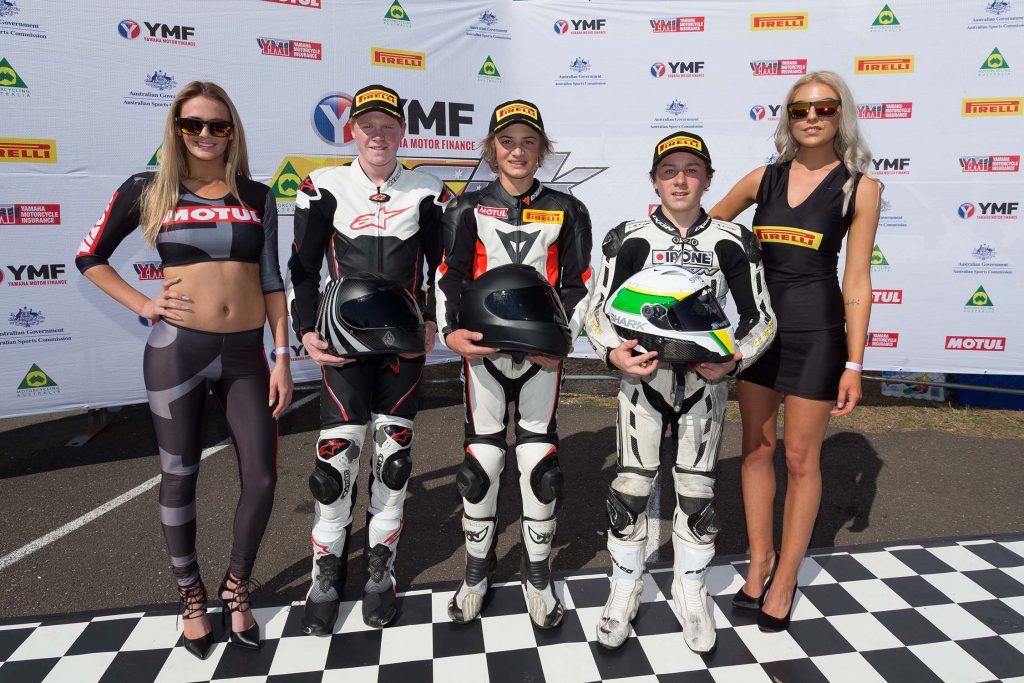 When bikes launched off the grid it was Toparis who led the pack in to the first turn, and after only a single lap had stretched out his lead on YRD’s Callum Alderson and Race Centre’s Drew Sells to more than half a second. Just behind Sells was Jack Dawes in fourth place, followed by Kawasaki mounted Reid Battye in fifth.

With Toparis stretching out his gap on second place to more than two seconds by lap three, the battle for second position kept spectator’s eyes glued to the track, with Alderson holding off a hard charging Sells by the smallest of margins. And by the time bikes headed in to lap four, Sells had executed a pass on Alderson and made his way in to second position.

However, on that very same lap, a crash involving Lee Cheetham in turn ten, forced race two for the Production class to be red-flagged.

After a quick break for riders to make adjustments and warm tyres, race two was resumed with four laps to run, and once again it was Toparis who got the jump off the grid and moved in to the race lead.

Three seconds behind Toparis was a three-way battle for second position, Sells, Alderson and Battye all within striking distance of each other, keeping spectators guessing as to who could edge out the other.

However, a crash in turn four involving Jim Condon forced the race to be red-flagged for a second time – race two then declared at the six lap mark, meaning Up to 300cc rider Toparis was awarded with the win, followed by Sells (Up to 300cc) in second, and Over 300cc YRD rider Alderson in third, who also collected the Over 300cc win.

When the third and final race for the Akrapovic Production class kicked off, once again it was Toparis who got the jump and was on fire out in front, followed by 2 Thugs Custom’s Brandon Demmery and Bikebiz’s Sam Condon.

After only two laps, Condon made his way past Demmery in to second position, and began to eye off Toparis’ rear wheel, while behind the lead pair, Demmery, Alderson and Sells were locked in to their own battle for third position.

And it wasn’t long before Alderson was able to make his way around Demmery and in to third, leaving Demmery and Sells to go to battle behind him.

Despite Condon’s every effort to challenge Toparis for the race lead, and getting very close on the final lap, Toparis was determined to remain undefeated, and when the chequered flag flew for the final time, it was rookie Up to 300cc rider Toparis who had plenty of reason to celebrate taking the race two victory. Coming a close second was fellow Up to 300cc rider Condon, followed by Over 300cc competitor Alderson who wrapped up race three in third and with the Over 300cc victory.

Demmery (Over 300cc) concluded the final race for the Production class in fourth, followed by Race Centre’s Sells (Up to 300cc) in fifth.

At the conclusion of the round, in the Up to 300cc category it was Toparis who was awarded the Round 5 victory, followed by Sells in second and Justin Hall in third.

In the Over 300cc category, Alderson wrapped up the round with the top spot on the podium, followed by Dawes and Demmery in second and third respectively.

Keegan Pickering flew the flag solo for the Women’s production class this weekend, concluding the round with the overall Women’s victory. 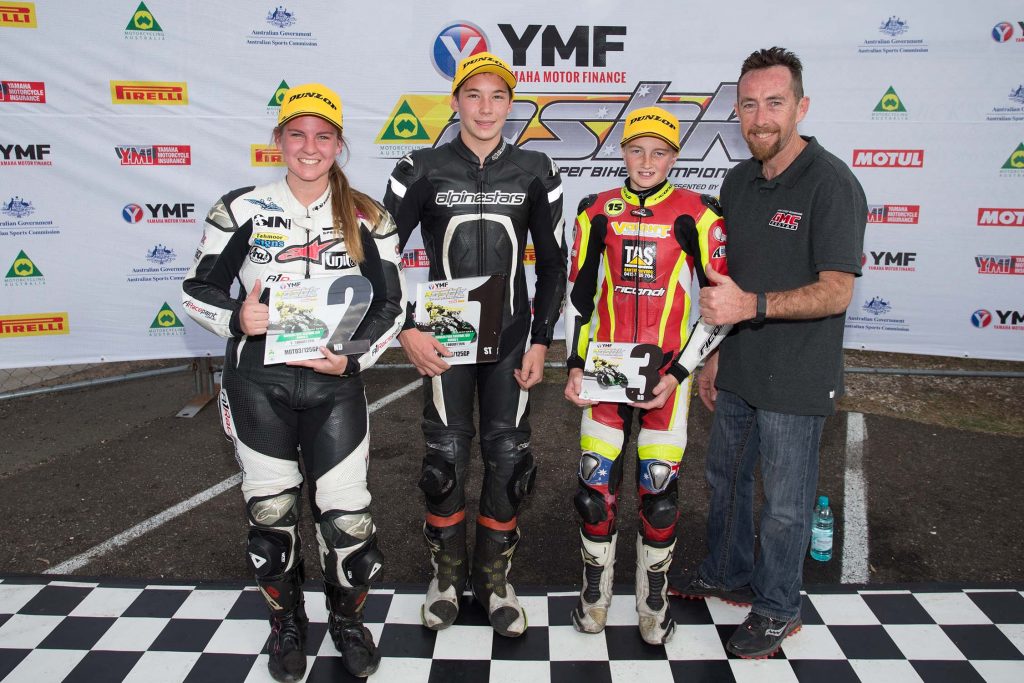 When the second race for the Honda Moto3/125GP class kicked off this morning, once again Championship points leader Brian Houghton looked unstoppable, getting to the early race lead, followed by Graeme Boyd Motorcycle’s Tommy Edwards and Tayla Relph.

And after only three laps, Houghton had stretched out his lead to almost two seconds, putting plenty of space between himself and closest competitor Edwards, while Relph and youngster Locky Taylor were back in third and fourth places, followed by Sarah Fairbrother.

As race two progressed, Edwards began to close in on Houghton’s lead, and by lap eight, the pressure had mounted and not long after Houghton went down, handing the lead to Edwards.

Despite getting to his feet, Houghton was unable to re-join the race, so when the chequered flag flew, it was Edwards who collected the race two victory from Relph, who crossed the line in second, while Taylor and Fairbrother wrapped up race two in third and fourth places respectively.

When the final race of the day kicked off for the Moto3/125 GP class, with a race win up his sleeve, Edwards was high on confidence, immediately moving in to the race lead ahead of Relph and Houghton.

But after a tough morning for the championship points leader, Houghton was determined to turn things around, and after less than one lap on track, had managed to get by Relph and move in to second position behind Edwards.

From there Edwards checked out by more than five seconds, and the attention then shifted to the battle for second, with Houghton, Relph and Taylor all eyeing positions on the podium.

With only three laps to go, Edwards was untouchable out in front, and despite every effort from Relph to make a pass for second, she continued to circulate in third position behind Houghton.

And when bikes crossed the finish line for the final time, it was Edwards who collected his third race win for the weekend ahead of Houghton and Relph in second and third, while Taylor and Fairbrother wrapped up race three in fourth and fifth places respectively.

With three from three race wins, Edwards was awarded the round five victory, followed by Relph who was awarded second place on the Honda Moto 3/125 GP podium, while Taylor secured third position with 4,3,4 race results.

Race two for the Ricondi Club Challenge competitors kicked off just as the sun came out at Morgan Park today, and it was a familiar sight once again with Honda rider Anthony Carroll once again snatching up the race lead from Simon Dickson and Leigh Holmes.

After only two laps, Carroll had once again stretched out the gap on second place to an incredible four seconds, allowing the battles for positions to happen behind him. And battle they did – by lap three, both Dickson and Holmes went down whilst fighting for second place in turn one, shaking the standings up once again.

And from there riders completely spread out, race leader Carroll pulling eight seconds on second placed Chris Dunster, while Glenn Chandler and Matt Edwards slotted in to third and fourth places respectively.

And it was in those positions that they stayed until the chequered flag flew. Carroll securing his second race win of the weekend, ahead of Dunster in second, followed by Chandler who concluded race two in third.

Matt Edwards crossed the finish line in in fourth, followed by Ashley Robinson who completed the top five.

In the final Ricondi Club Challenge Formula 3 & 4 race this afternoon, once again it was Carroll who launched off in to the early race lead, but this time Dickson was not letting the Honda rider out of his sights – the pair putting on one final performance for spectators at the Morgan Park venue throughout eight laps.

Directly behind Dickson, was Kawasaki rider Holmes in third, followed by Edwards and Robinson who continued to circulate in fourth and fifth places respectively at the five lap mark.

And despite brief challenges throughout the the final three laps, there was no change to the order of positions, meaning Carroll collected yet another race victory, from Dickson in second, and Holmes in third.

At the conclusion of the round, Carroll was awarded the top position on the Club Challenge podium, while Edwards took second for the round followed by Robinson in third.

The sixth and final round of the 2016 Yamaha Motor Finance Australian Superbike Championship presented by Motul Pirelli (ASBK)will be held at Winton in Victoria on September 30, to October 2, 2016.

For more information on the ASBK, head to www.asbk.com.au, or for a full list of results from today, head to www.computime.com.au.