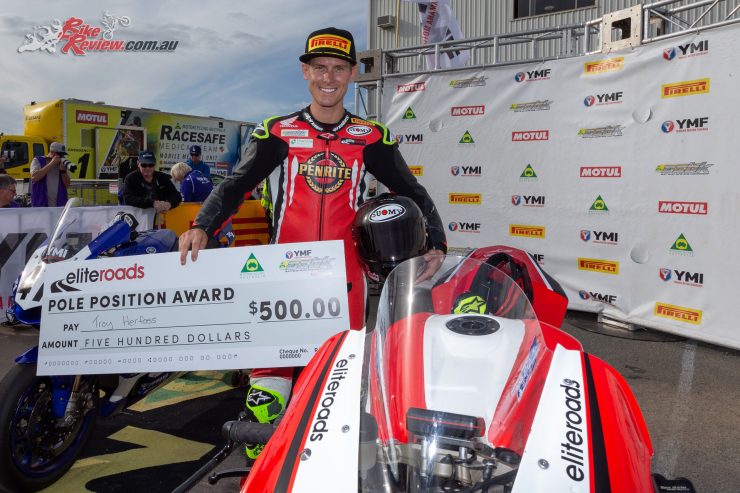 The pole position gives him a chance to secure the title tomorrow, should results fall his way in the Yamaha Motor Finance Australian Superbike Championship presented by Motul Pirelli (ASBK).

Herfoss was devastatingly quick in the final stages of Qualifying Two on his Honda machine and secured his third pole position of the season. As a result, he was awarded with the Elite Roads Superbike Pole Position award and cheque. 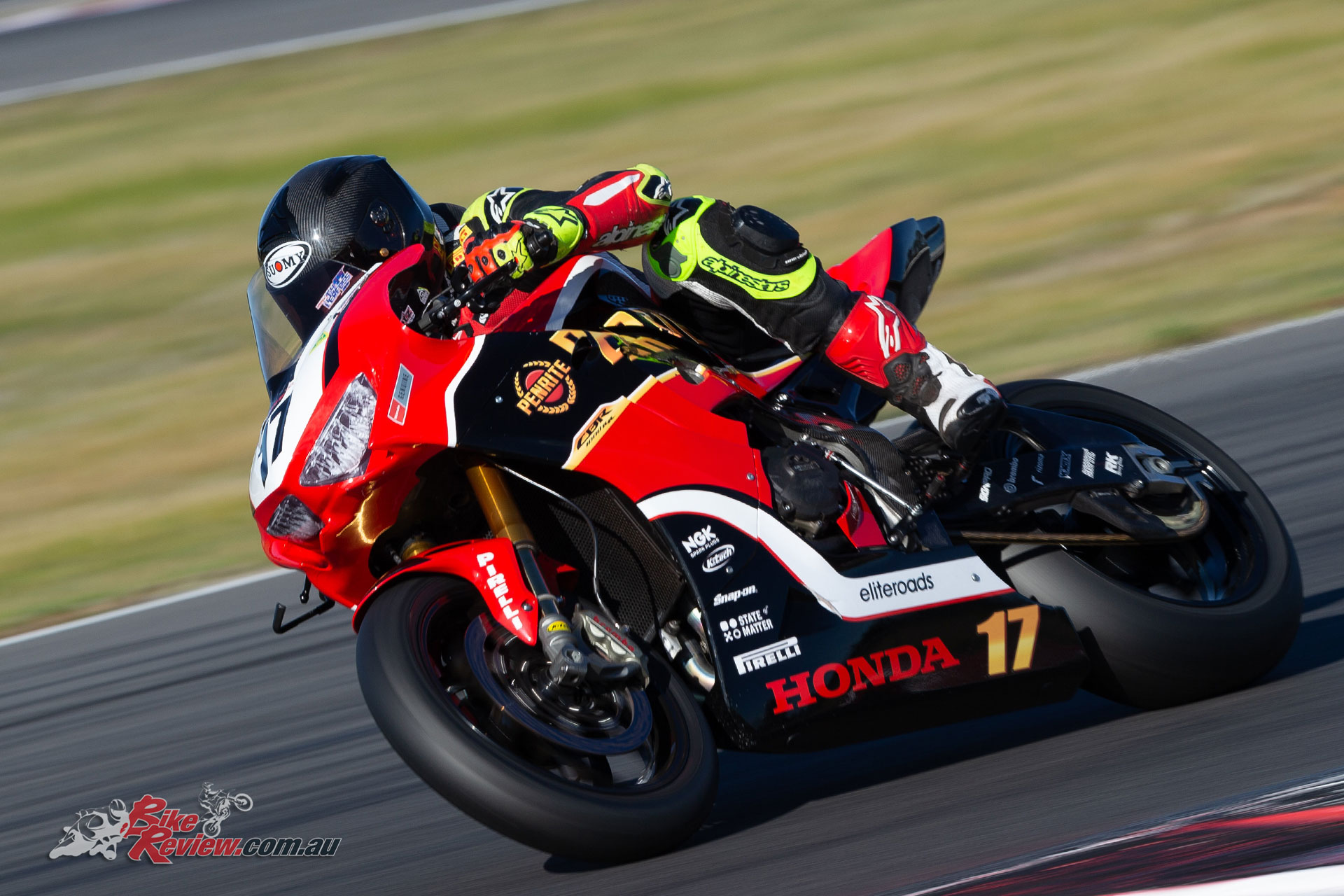 “It’s been an incredible day,” Herfoss exclaimed. “You typically know if you’ve got a shot at pole position in the lead up, but to be honest, I was surprised with the lap time that we put in. I’m just so over the moon, because it was unexpected given Wayne’s pace around this track.”

Starting P2 on the grid will be Wayne Maxwell (Yamaha Racing Team, YZF-R1) who appeared to be the favorite for pole heading into qualifying. He led for the majority of Qualifying Two but a late dash by Herfoss meant he had to settle for second fastest. It will be fascinating to see if his long run pace can make the difference tomorrow. 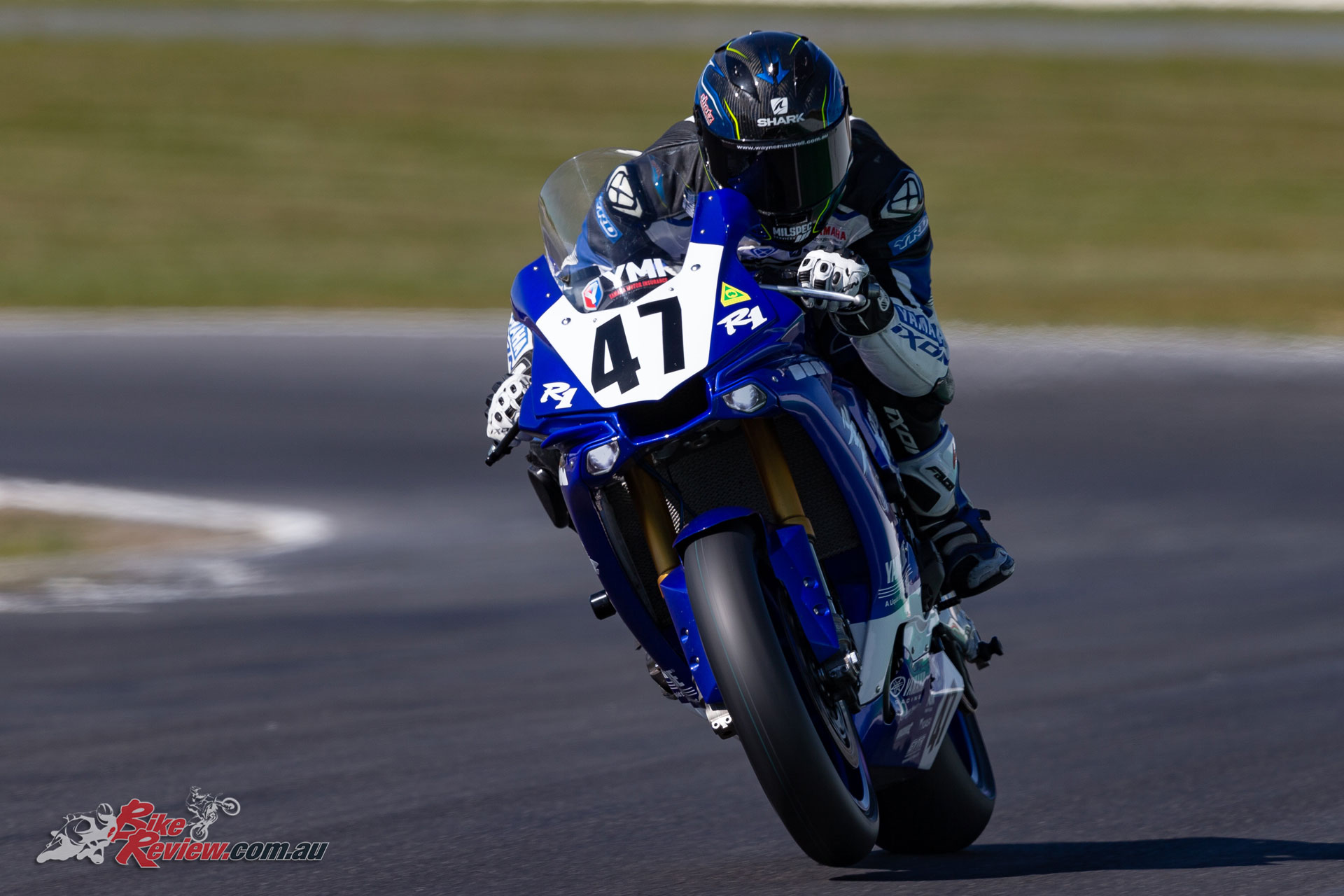 Troy Bayliss (Desmosport Ducati, 1299 Final Edition) will start third tomorrow, completing the front row. The Ducati rider has been a constant podium threat this year, so expect him to be challenging up the front tomorrow.

Josh Waters (Team Suzuki ECSTAR, GSX-R1000R) starts from fourth and looks comfortable around the Winton track. He was only .188 off pole, it just shows the level of competitiveness in this class.

Bryan Staring (Kawasaki BCperformance, ZX-10R) has been strong in all of the practice sessions. After a difficult Morgan Park round, he could be right back in contention for a podium with fifth in qualifying.

Will Herfoss claim the YMI Superbike Championship tomorrow or will Maxwell take the title fight to the final round? Make sure to tune in on SBS, pay TV (1pm AEST) and Livestream (All Day) to find out! 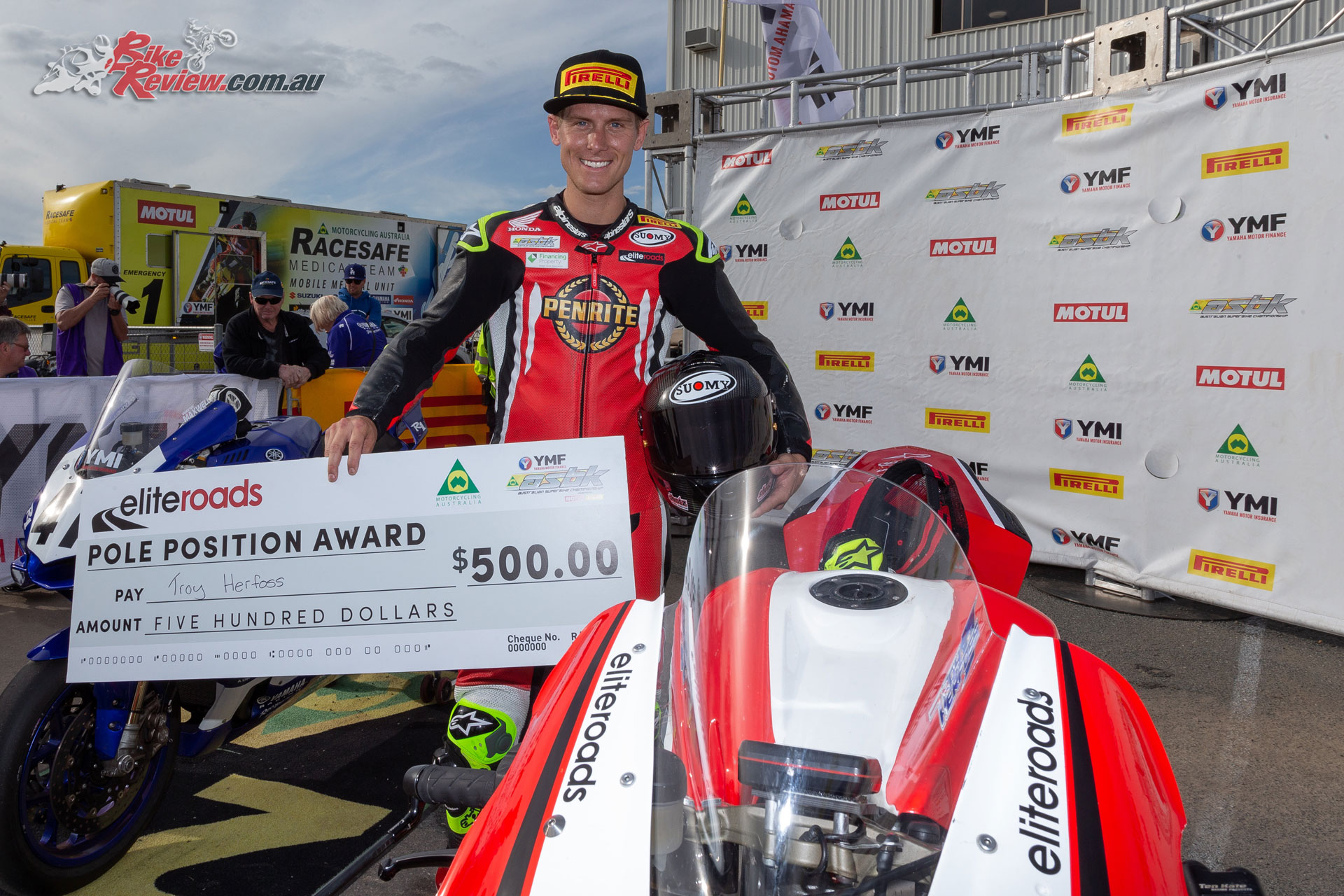 It will be the #23 leading the pack in the Yamaha Motor Finance Australian Superbike Championship presented by Motul Pirelli (ASBK) Kawasaki Supersport class for the fifth time in a row, after Cru Halliday (Yamaha Factory Racing, YZF-R6) registered the quickest time here at the Spokes.com.au presents Round 6 Winton Motor Raceway. 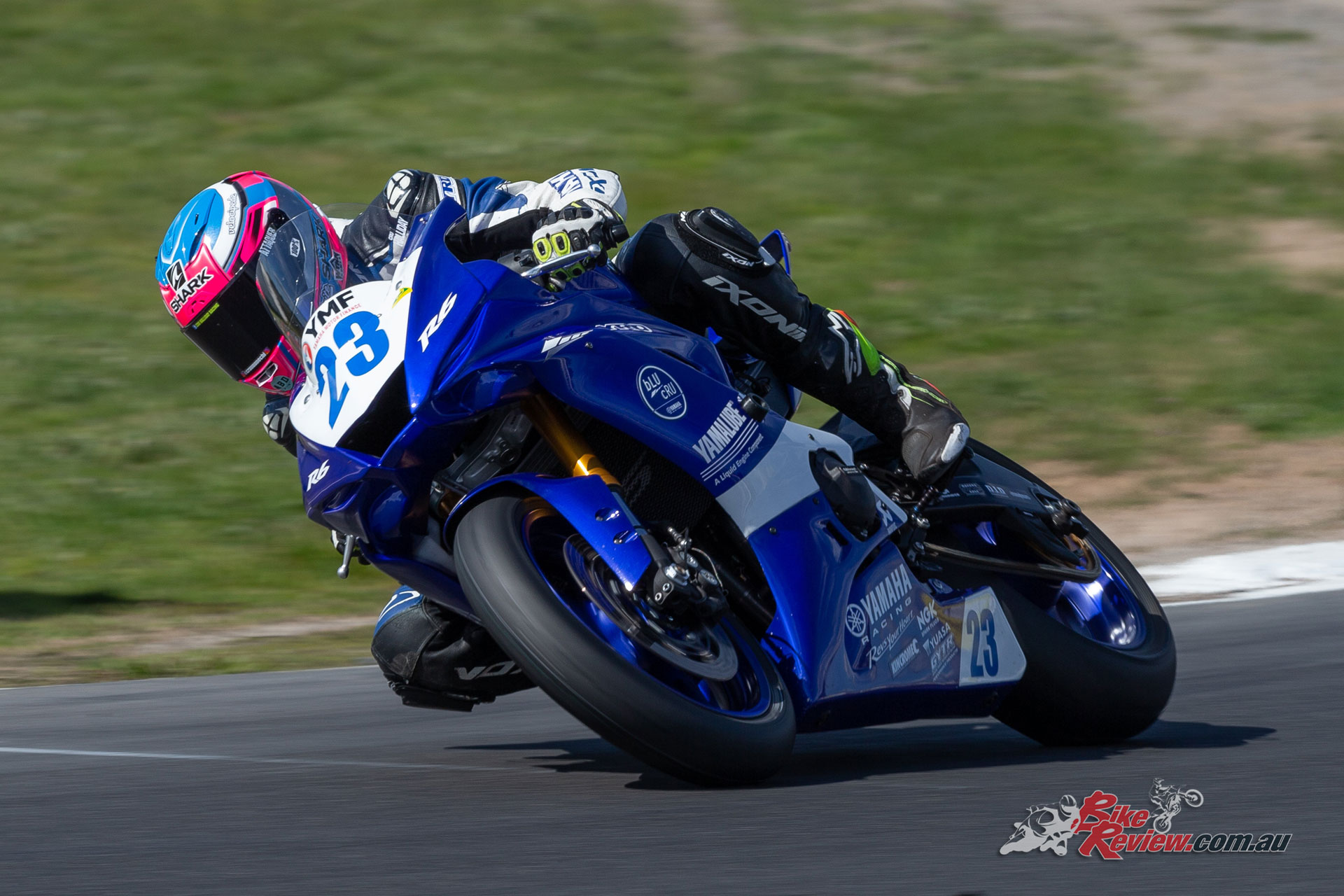 Halliday wheeled his YZF-R6 around the circuit in a time of 1:23.384 to once again put the field on notice. The Yamaha rider is not likely to play for points and go all out for wins tomorrow.

Tom Toparis (Cube Racing, Kawasaki ZX-6R) will be looking to take it up to Halliday and the Kawasaki rider will start alongside him at the front of the gird. Toparis put in a best lap of 1:23.471 to end qualifying in second, but he is definitely within striking distance in both of tomorrow’s races. 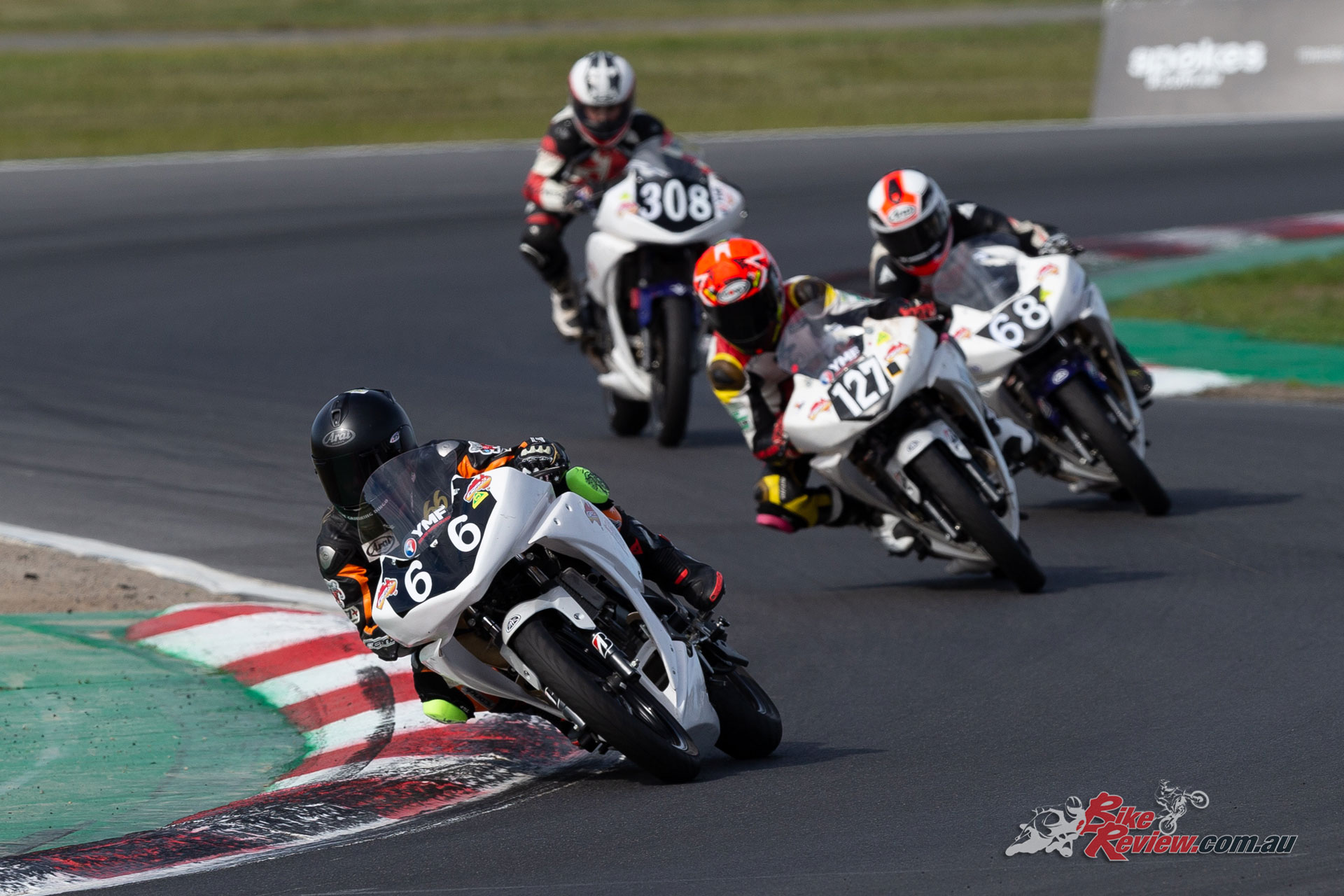 In his return to ASBK, Nic Liminton (Yamaha YZF-R6) has definitely made the seamless transition back into the Kawasaki Supersport field, registering a fastest lap of 1:23.734 to end qualifying in third. Liminton could be the rider to break Halliday’s streak tomorrow here at Winton.

Becoming one of the most consistent riders in the Kawasaki Supersport class this season has been Damon Rees (Carl Cox M-Sport, Honda CBR 600) who finished qualifying in fourth with his time of 1:23.951. Rees had his best round of the season last time out at Morgan Park and he looks to have the speed to replicate that effort here at Winton.

Rounding out the top five after making his return at Morgan Park is Broc Pearson (Yamaha Australia, YZF-R6) who is starting to find the form he had before his injury at ‘The Bend’. The Yamaha mounted rider collected a fastest lap of 1:24.239 and will be looking to get back on the podium.

Just outside the top five was Max Croker (Mat Mladin Racing, Suzuki GSX-R600) who collected the sixth fastest time during qualifying with a 1:24.393.

Zac Johnson (Rebuilder, Yamaha YZF-R6) is comfortably inside the top ten and will start from seventh position after his best lap of qualifying, a 1:24.872.

It all starts again tomorrow as the Kawasaki Supersport put it all on the line in two races, kicking off with the first race at 10:10am and then race two at 1:10pm.

Young Max Stauffer (Rock Oil, Yamaha YZF-R3) has put together the perfect race here in the Australian Supersport 300 class at the Spokes.com.au presents Round 6 at Winton Motorway. Stauffer started from pole position and didn’t look back leading from start to finish, showing a real liking for the Winton circuit here at the Yamaha Motor Finance Australian Superbike Championship presented by Motul Pirelli (ASBK). 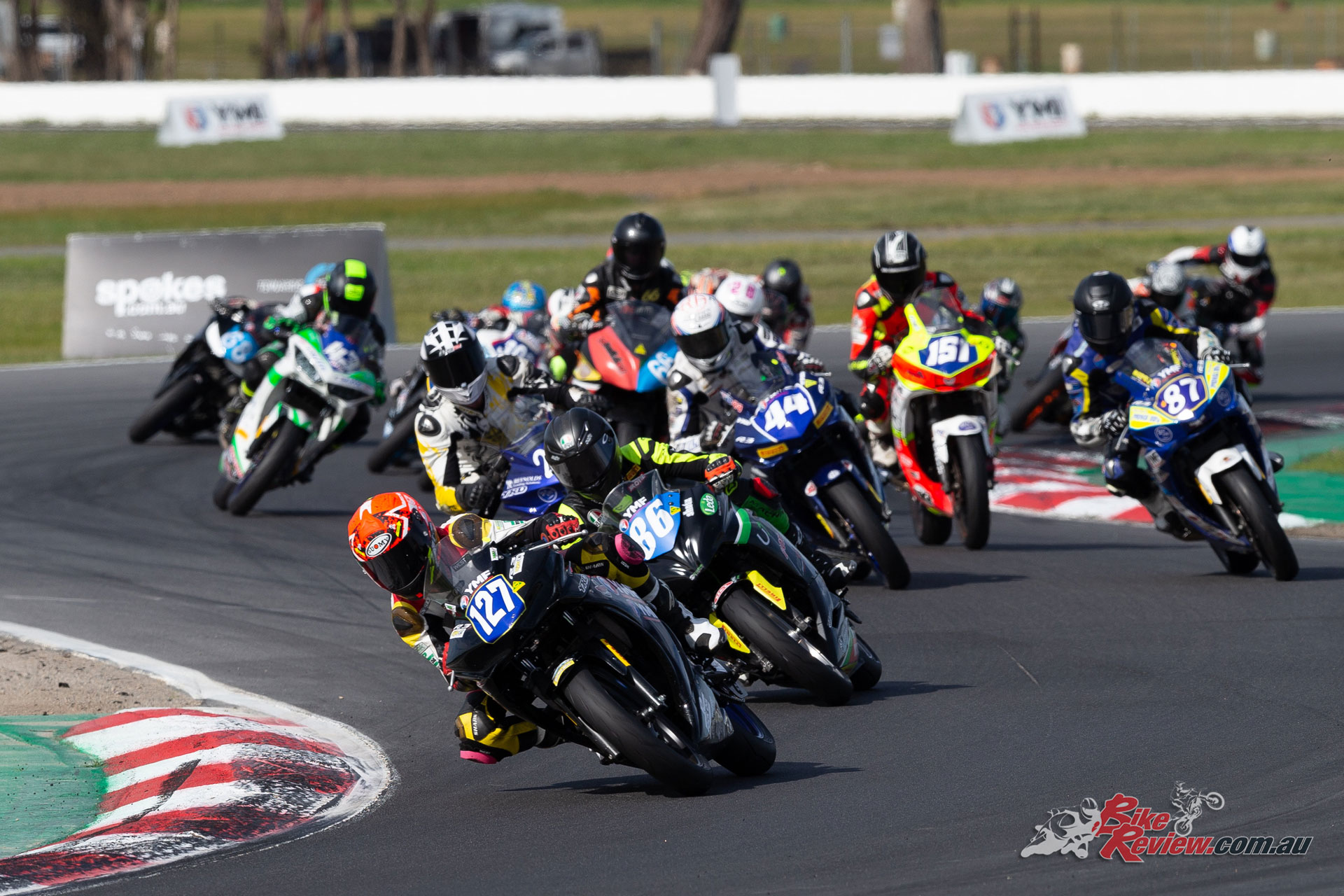 Stauffer has been building throughout the season and in race one it was a break out performance. The #127 was challenged midway through the race by Hunter Ford (YRD, Yamaha YZF-R3) but he saw that off to take his first 300 class victory by just over three seconds.

The feeling of taking out the win is something Stauffer wouldn’t have dreamed of; “It’s indescribable to get my first win on a 300! I’ve just wanted to win so bad and I’m so proud of myself to take the steps towards a race victory,” finished Stauffer.

Ford would once again be on the podium here in the Supersport 300 class, this time in second position as he just couldn’t find consistent race speed of Stauffer. Ford has the quickest lap of the race but would have to settle for second. 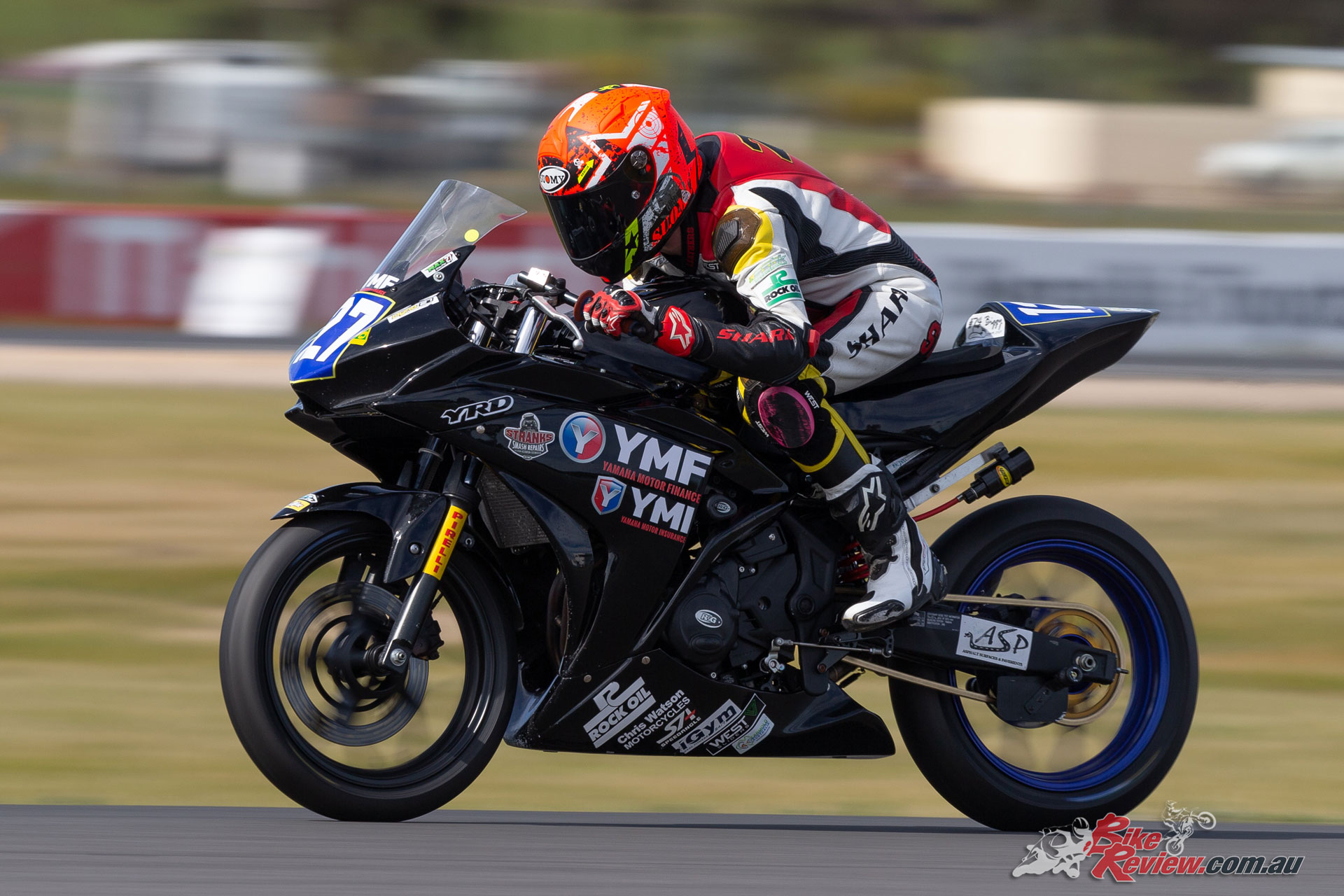 In third position is current championship leader Tom Bramich (JLT, Yamaha YZF-R3) who was consistent throughout the race but would be disappointed to not battle out the front with Stauffer and Ford. In saying that, his third position gives him handy points in the race for the championship.

Oli Bayliss (Cube Racing, Kawasaki Ninja 300) just missed out on the podium and enjoyed a good battle with Bramich, collecting fourth position in the first race of the weekend.

Rounding out the top five was Zac Levy (Puma RV’S, Yamaha YZF-R3) who continues his consistent season in the Supersport 300 class.

The Australian Supersport 300 field will be back on track for two more race tomorrow, the first of the two races kicks off at 9:40am and then race three at 2:35pm. 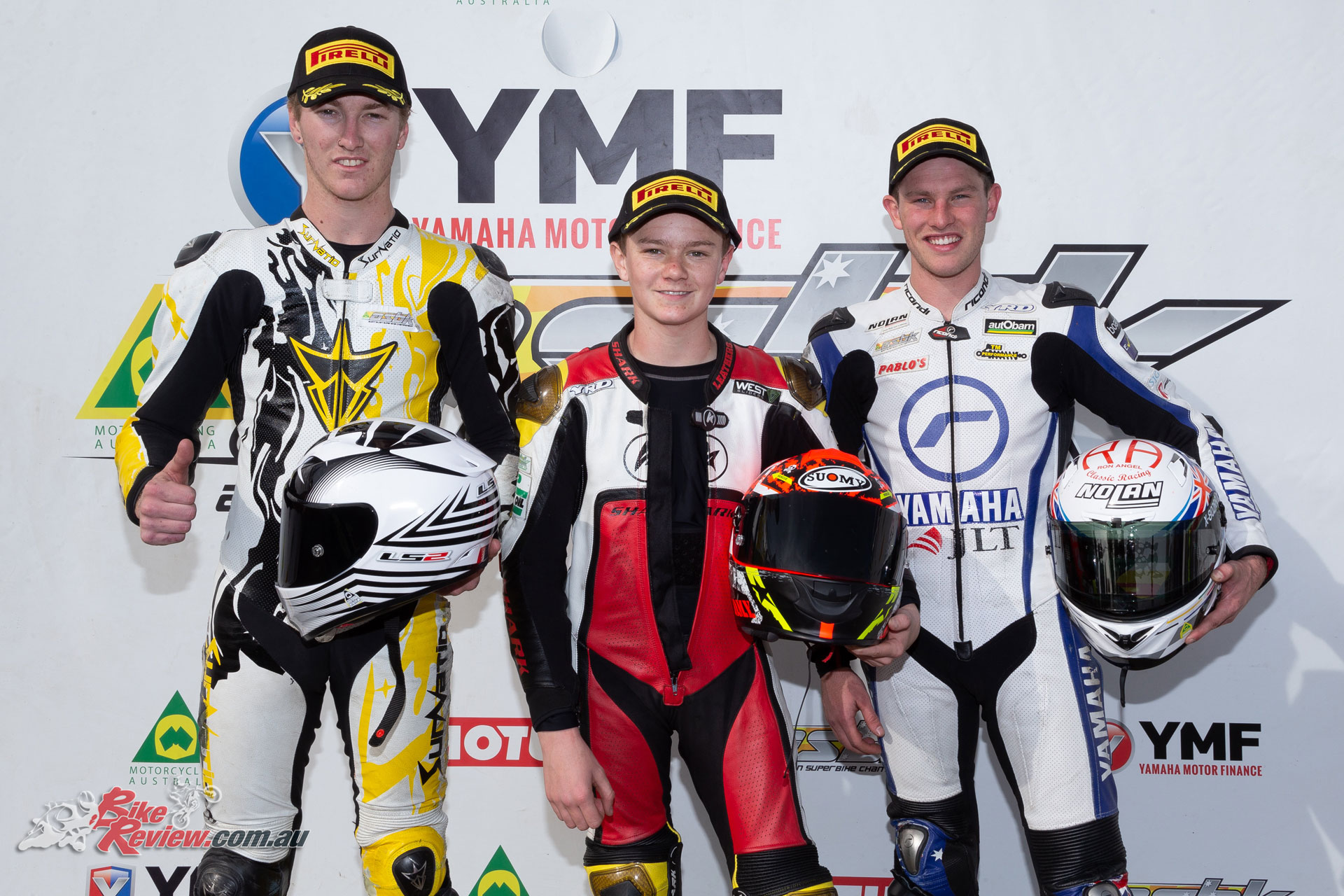 After today’s racing Max Stauffer (Rock Oil, Yamaha YZF-R3) will be now thought of as a Winton specialist, taking out race one of the YMF R3 Cup at the Spokes.com.au presents Round 6 at Winton Motor Raceway. Stauffer also took out the Australian Supersport 300 class earlier in the day at the Yamaha Motor Finance Australian Superbike Championship presented by Motul Pirelli (ASBK). 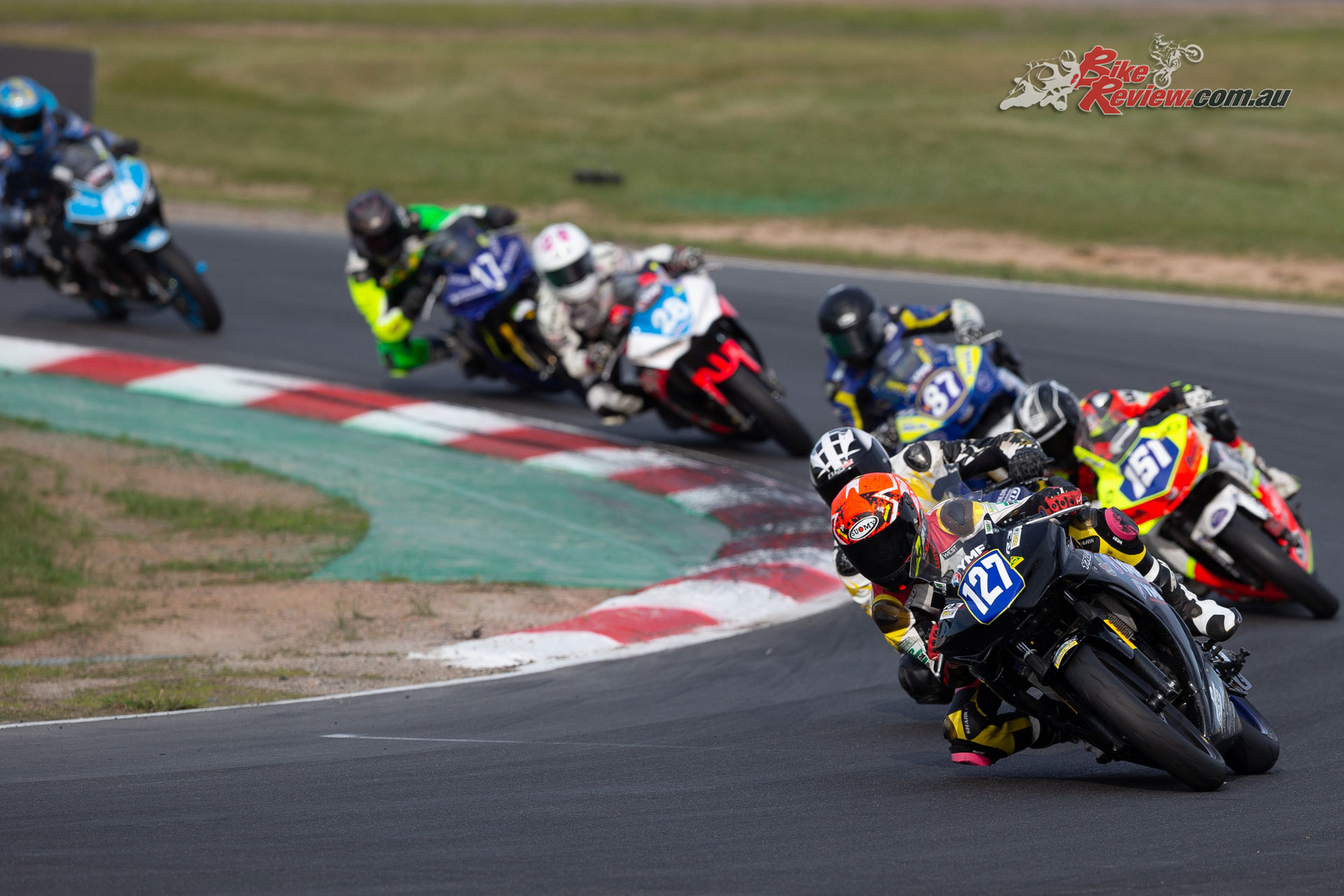 Starting from pole position, Stauffer led from start to finish, but it was a dash to the line between the #127 and Hunter Ford (Yamaha, Yamaha YZF-R3) as the pair were only split by just .186s. The YMF R3 Cup has been known for its tight finishes throughout this season and today it was a spectacle again.

Ford who had to settle for second behind Stauffer in the Supersport 300 class, once again took second place as the pair were involved in another enthralling battle.

The last spot on the podium went to Locky Taylor (Shark Leathers, Yamaha YZF-R3) who finished just over two and half second off the pace of the front pair.

A battle just outside the last spot on the podium went down to the final lap as Tom Bramich (JTL, Yamaha YZF-R3) and Tayla Relph (Earmold Australia, Yamaha YZF-R3) battled it out for fourth position. It would be Bramich who got the better of the battle. Relph would cross the line in fifth after a consistent ride here at Winton.

The YMF R3 Cup will be back on track tomorrow for two more races with the riders doing battle at 12pm for race two, and then race three at 3:20pm. 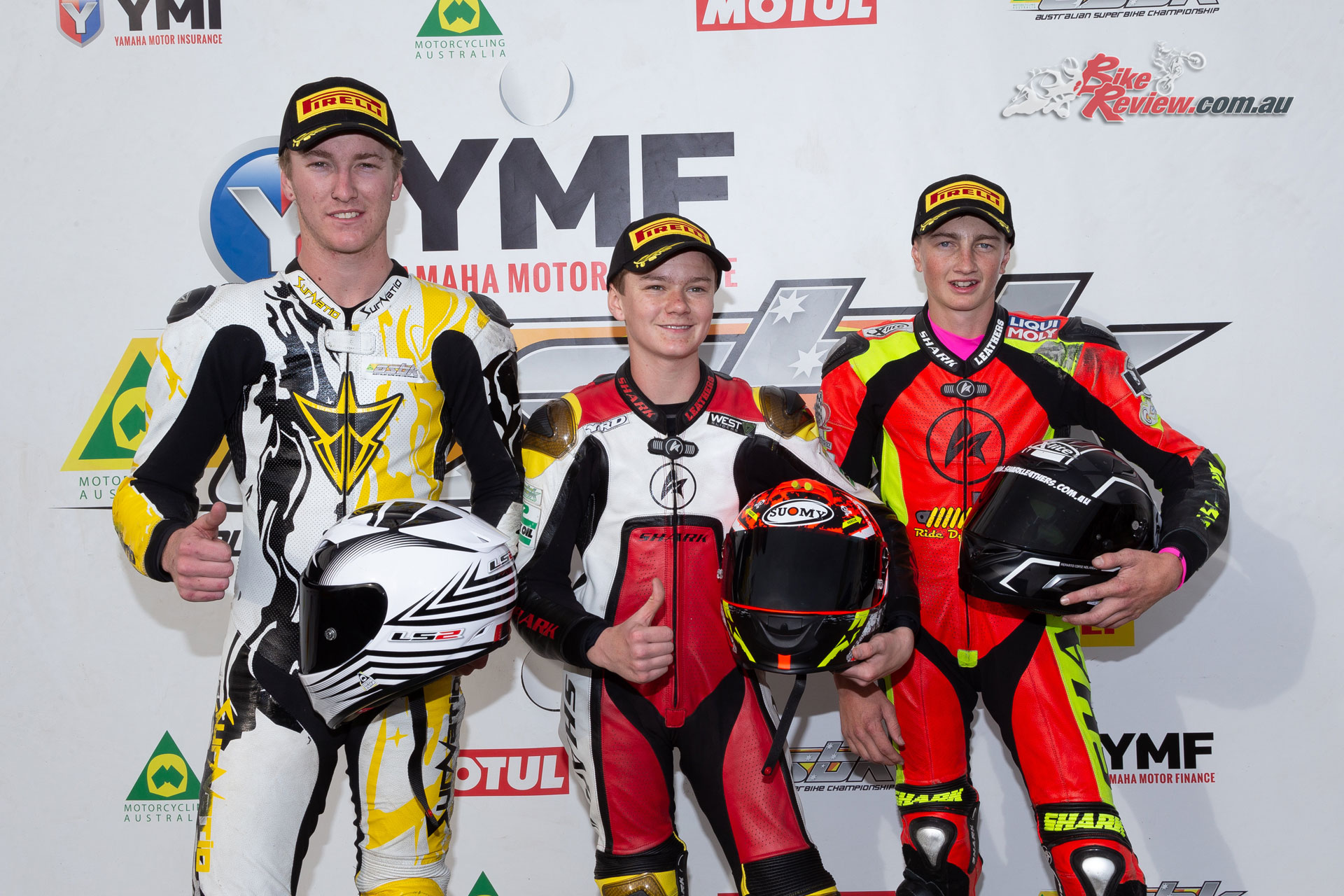