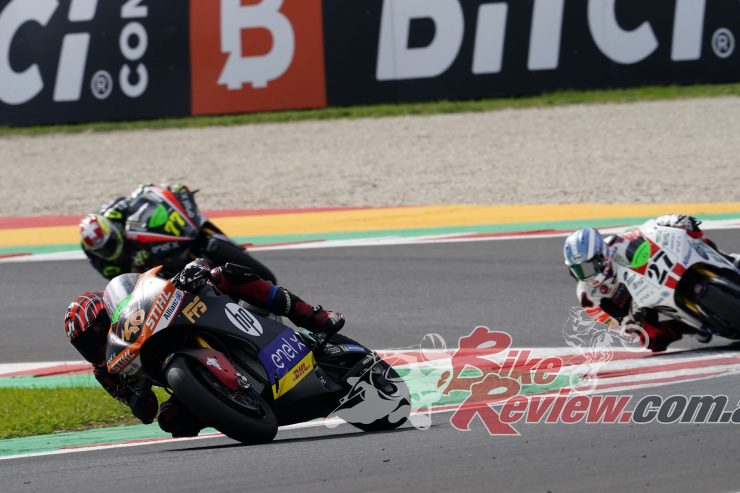 Race 1 at Misano was a big one for the 2021 FIM Enel MotoE™ World Cup, with the crown at stake already – and certainly a hotseat in the standings for the final race of the season. Jordi Torres fought hard all year and it seems that hard work has finally paid off. 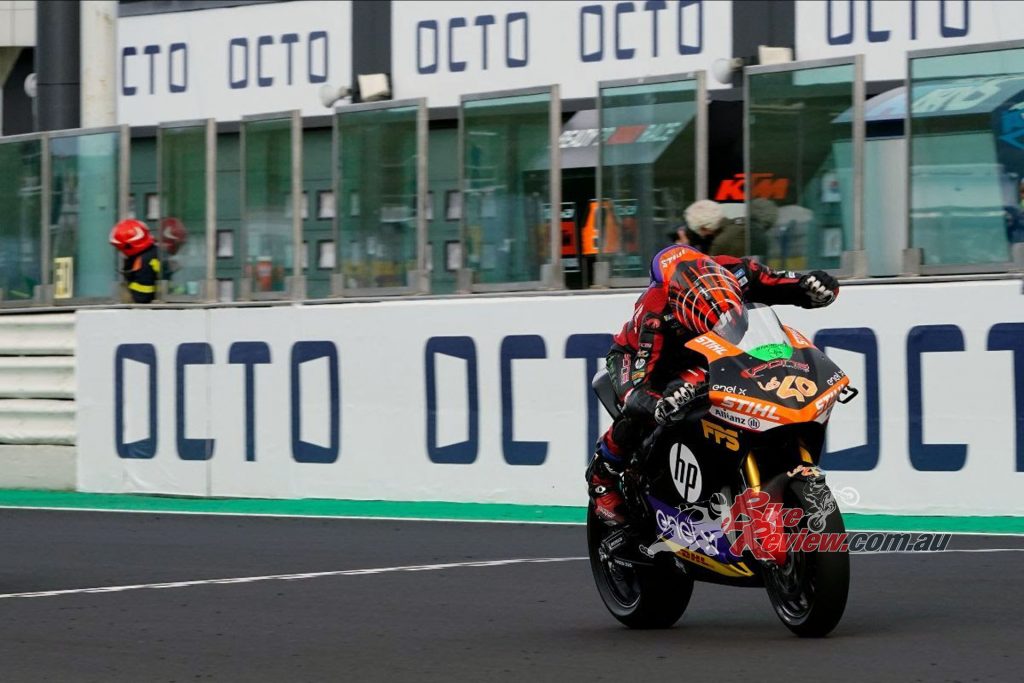 As the dust settles, it’s Jordi Torres (HP Pons 40) who emerges as the winner and the new points leader, with the Spaniard playing it to perfection in a wily last corner. Dominique Aegerter (Dynvolt Intact GP) was just pipped to it and was forced to settle for second after seeing off a late lunge from Eric Granado (ONE Energy Racing), with the Brazilian going in too hot and sliding out. Mattia Casadei (Ongetta SIC58 Squadra Corse), meanwhile, rounded out the podium after an impressive return.

Stay up to date with all the latest MotoE news here…

There was drama from the off as points leader going in, Alessandro Zaccone (Octo Pramac MotoE), crashed early on Lap 1, out of contention and also taken to the medical centre after the Italian suffered post-crash contact from Hikari Okubo (Avant Ajo MotoE). Zaccone was then transferred to hospital for further checks and was found to have an iliac wing fracture in his pelvis. He’s unfit, so will sit out Race 2, and everyone at the FIM Enel MotoE™ World Cup wishes him a quick recovery. 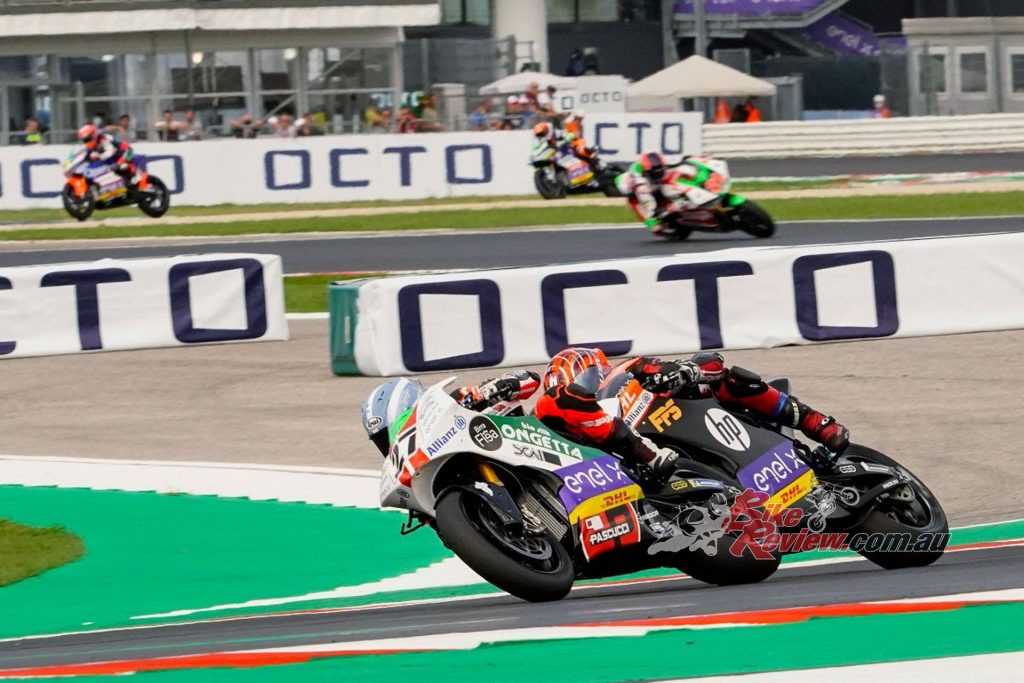 As Zaccone sadly lost his chance to fight for the crown, that battle raged on at the front and was getting tight. Torres had made a great start, joined in a breakaway group by Casadei, Aegerter and Granado, the latter making up some ground, as the four bolted just over a second free of Matteo Ferrari (Indonesian E-Racing Gresini MotoE). The pace was hot and the elbows out, with some stunning moves and certainly a scare for Torres as the Spaniard just clipped the rear wheel of Aegerter. But no harm done, and he slotted back in.

As the final sector of the final lap dawned, Aegerter was holding on in the lead as he put on another masterclass in door-closing, but Granado was close and Torres too. And Granado went for it right at the final corner, all-in and briefly edging ahead. But then hit the heartbreak as the Brazilian slid out, losing a key chance to gain big in the standings. 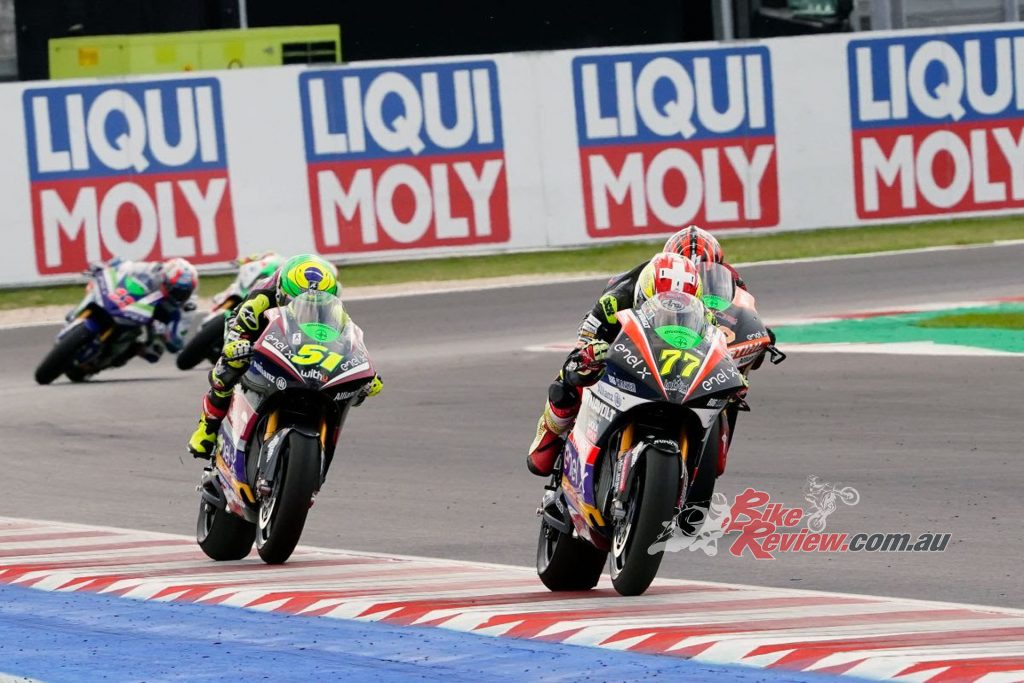 The attack left Aegerter slightly on the back foot and Torres capitalised to perfection, sweeping past and just able to beat the Swiss rider to the line. For the reigning Cup winner it’s the first victory of the season and it couldn’t have come at a better time, seeing him head into Sunday eight points clear of Aegerter at the top.

Casadei completed the podium after an impressive return for the final round, with Ferrari then classified fourth as he found his podium record at Misano take a dent. He was followed by rookie Miquel Pons (LCR E-Team). The final positions in the top 10 went to Kevin Zannoni (LCR E-Team); an impressive best yet, Fermín Aldeguer (OpenBank Aspar Team), Lukas Tulovic (Tech3 E-Racing), Yonny Hernández (Octo Pramac MotoE) and Xavi Cardelús (Avintia Esponsorama Racing). 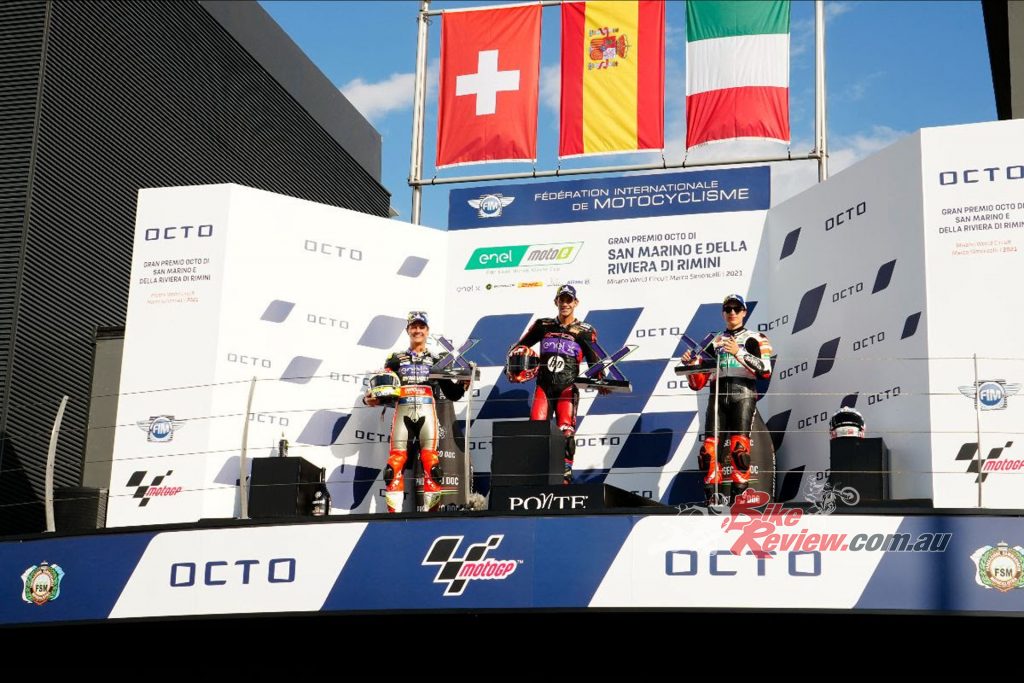 It’s now eight points in it between Torres and Aegerter, with Zaccone a further nine behind the Swiss rider and sidelined too. Granado remains in contention, just, but now 24 off the top. Race 2 will see the grid do battle for the final time in 2021, and that could all shuffle.

Race Two
The final race of the 2021 FIM Enel MotoE™ World Cup had everything on the line. On the way in, Jordi Torres (HP Pons 40) had eight points in hand over Dominique Aegerter (Dynavolt Intact GP), and the two at the top in the standings would also prove the key protagonists in the drama. 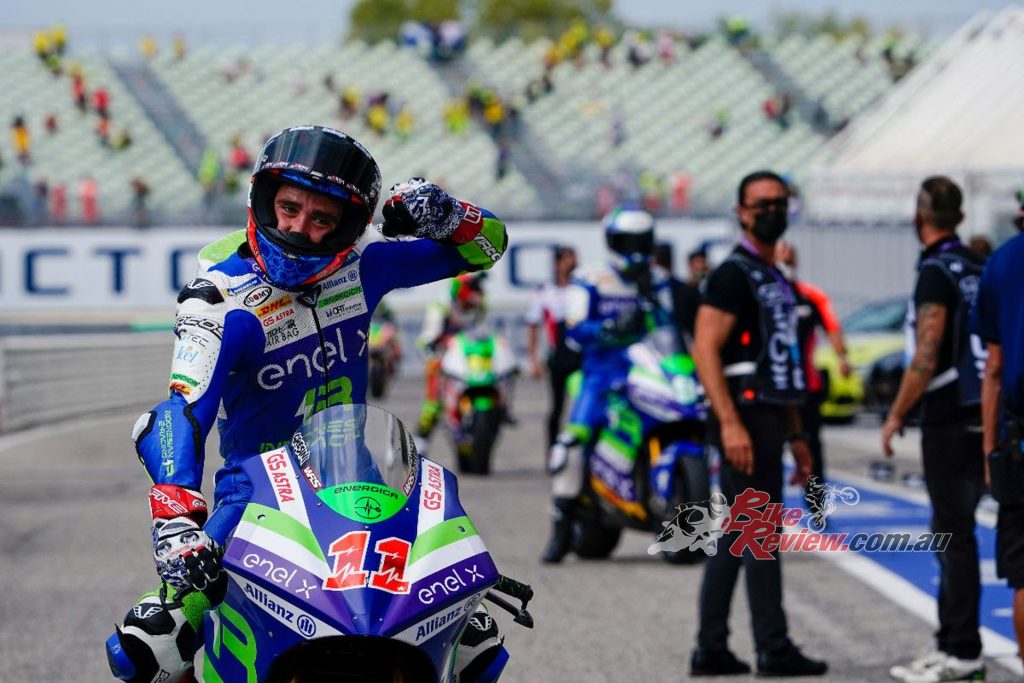 After an almighty duel between the duo, with the crown on the line, the contest ended in contact as Aegerter dived up the inside. Torres fell, although he remounted, and in parc ferme the verdict from the Stewards was in: Aegerter was given a Ride Through penalty, or the equivalent time, which was 38 seconds. That put him just ahead of Torres after the Spaniard made it to the line.. which wasn’t enough for the Swiss rider. So it’s #TwoTimeTorres at Misano.

That drama also decided the podium, with what had been a fight for third becoming the fight for victory. And it was King of Misano Matteo Ferrari (Indonesian E-Racing Gresini MotoE) who came out on top, winning the last race of the season to get back on the podium for the first time in 2021 – and extending his record at Misano to 5 wins from 7 races. Mattia Casadei (Ongetta SIC58 Squadra Corse) took second after more impressive speed, the only rider on the rostrum in both races at the season finale, with Miquel Pons (LCR E-Team) rounding out the year in third. 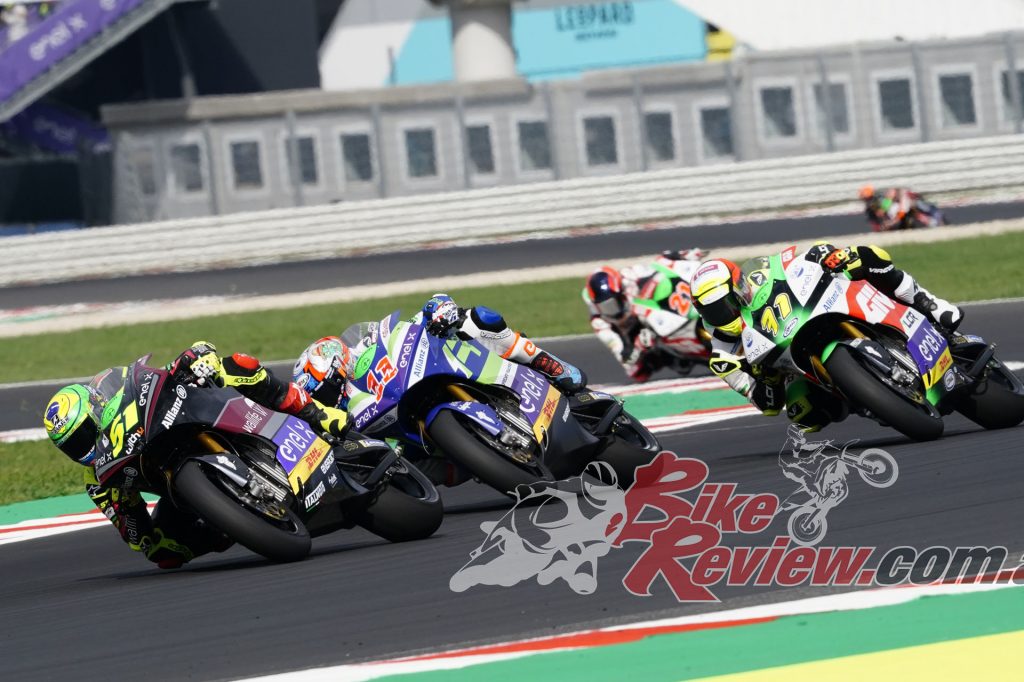 It was Casadei who got the holeshot going into the first corner, with Aegerter attacking Eric Granado (ONE Energy Racing) and Ferrari taking the long way around the outside to jump both and slot into third. He duelled Aegerter briefly, with Granado just behind, as Torres took the lead and then took off in the lead too.

On the second lap, the race leader had begun to open up a considerable gap, jolting Aegerter into action and the Swiss rider moving past Ferrari into P2. He then got the hammer down, and was able to close back up on his race-leading rival. 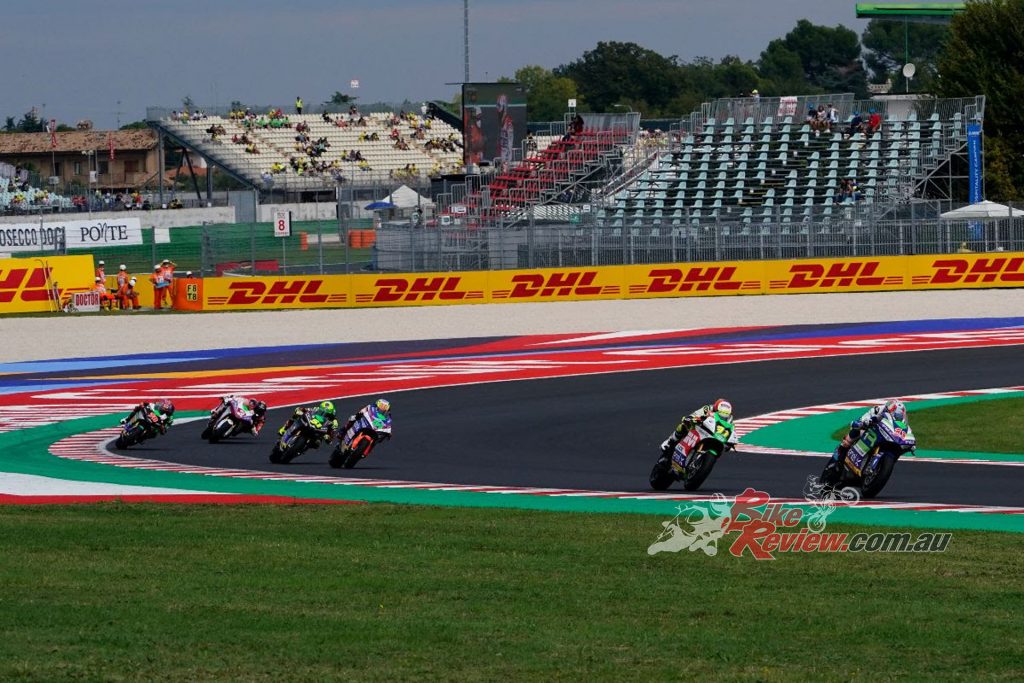 From there, a duel for the ages erupted as Aegerter threw the kitchen sink at trying to take over at the front, and it was spectacular as the two exchanged the lead. Torres wasn’t backing down and Aegerter was putting it all on the line. But with just a handful of corners to go, it hit boiling point. Aegerter lunged for it, the two made contact, and Torres found himself on the floor… leaving Aegerter free in the lead to cross the line first. The Spaniard managed to remount and finish in P13, but it seemed the Cup was decided.

The incident was immediately put under investigation, however. After a tense wait in parc ferme, a penalty was announced and 38 seconds were added to Aegerter’s race time for irresponsible riding. That’s the equivalent of a ride through penalty in MotoE™ as Misano as per the regulations, and it dropped him to 12th – just ahead of Torres. The Spaniard had, therefore, taken the crown after all. 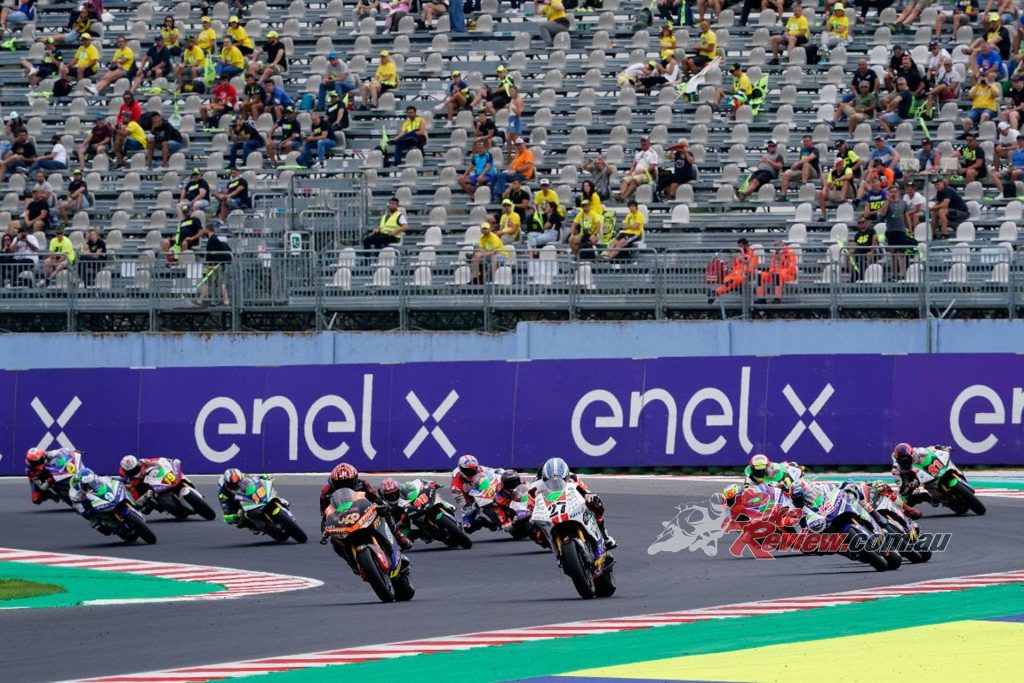 Behind all that drama for the overall Cup, there was a race to be decided too. The trio who’d been locked in their own battle for much of the race; Ferrari, Casadei and Pons, were on the podium. The Gresini rider was back on top, just ahead of Casadei, with Pons a few more tenths back but the rookie fast once again. 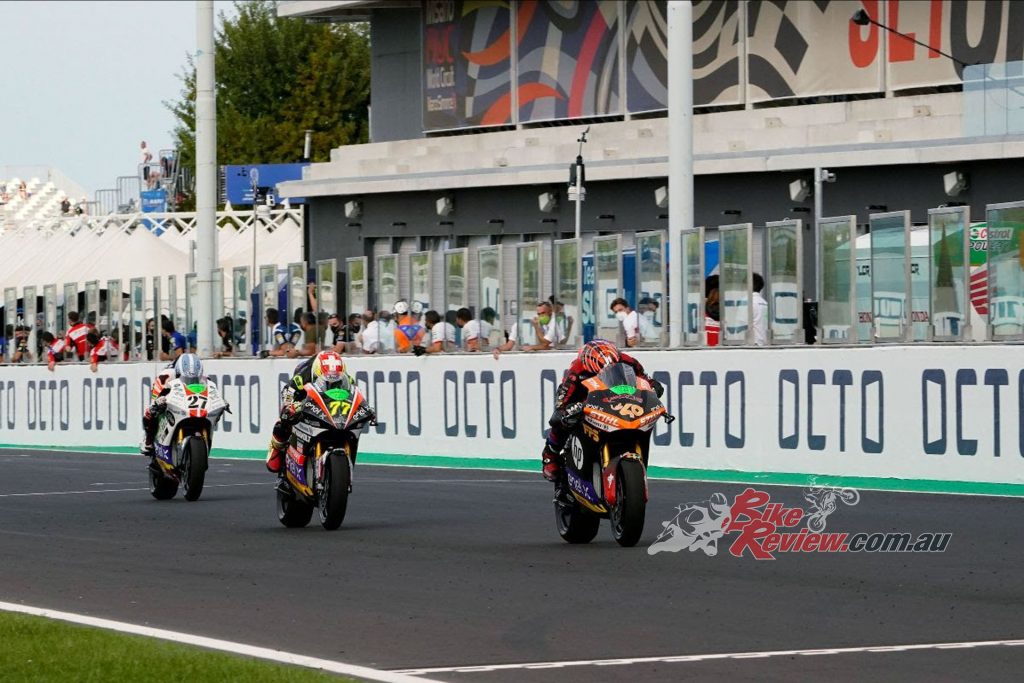 Aegerter was P12 and Torres P13, and with a helping hand from his teammate. Jasper Iwema saw the Spaniard had crashed, waited for him, and followed him home. Every point can count. 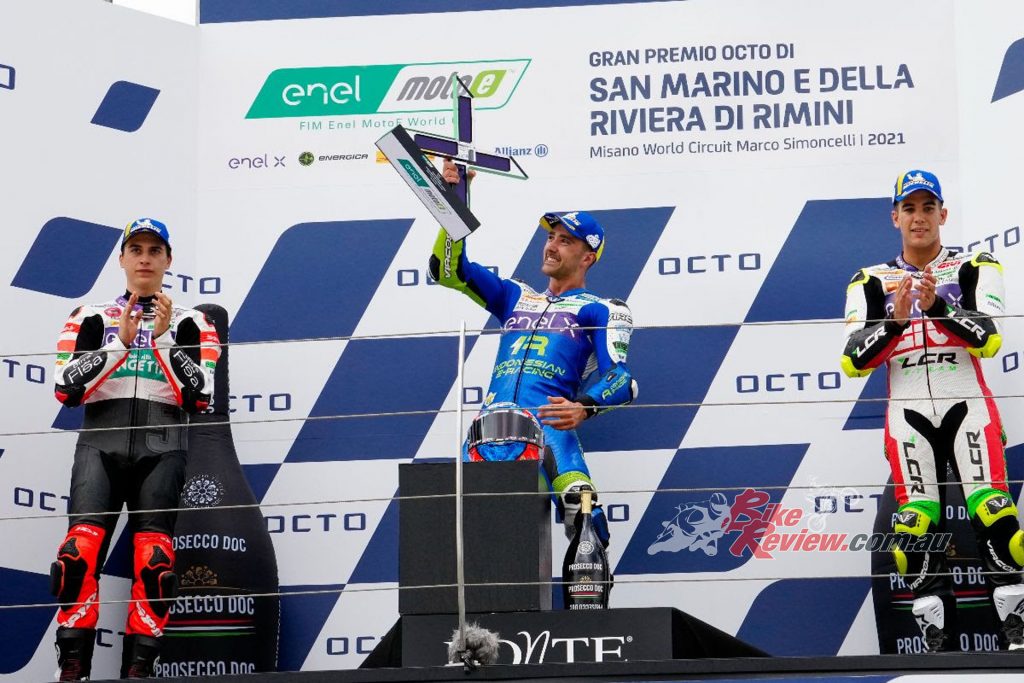 In the end, it was a one-point swing as the dust settles, with Torres ending the season seven clear of Aegerter. Ferrari leapfrogged Granado by just two points to take third overall, with Alessandro Zaccone (Octo Pramac MotoE) ending the year in fifth overall after his Race 1 crash and sitting Sunday out. And that’s a wrap on a dramatic, thrilling and truly electric season. We hope you enjoyed it… now recharge for 2022!

He’s won in Moto2™, he’s won in WorldSBK, and last season he took on a new challenge in the FIM Enel MotoE™ World Cup. And it went pretty well as Jordi Torres took the crown despite being a rookie, putting together a consistent season and a fast one too. The Spaniard returned to the field in 2021, and he’s now become the first rider to win the Cup twice. 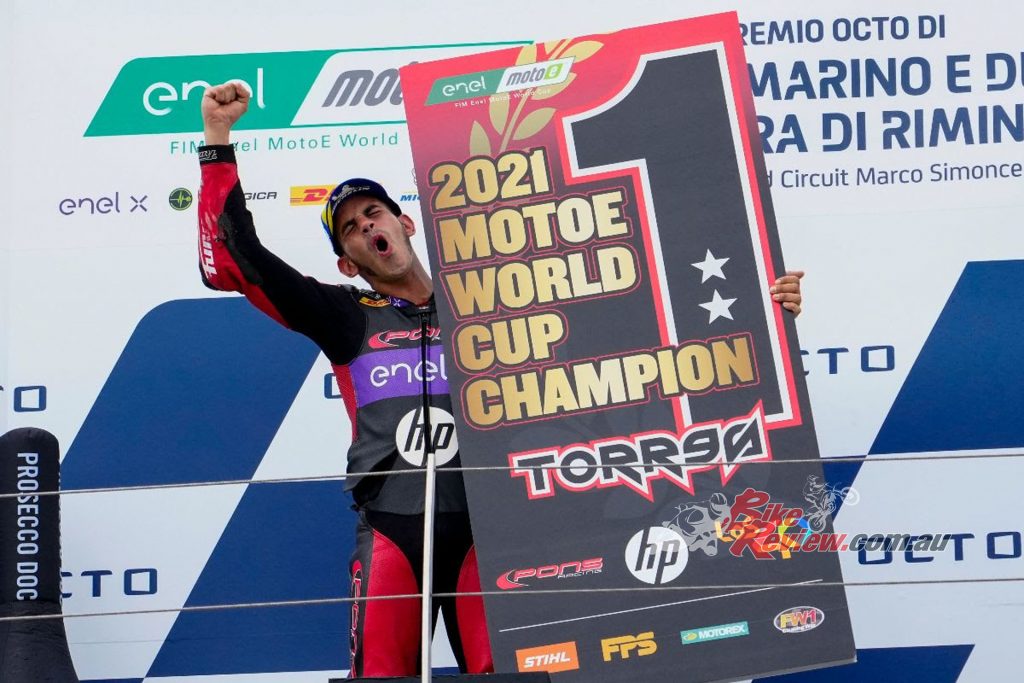 Torres’ ascent to the Grand Prix paddock was preceded by two titles in the Moto2™ class in the CEV, and he became a popular face in the intermediate class of Grand Prix racing thereafter. He took his maiden Grand Prix win at the Sachsenring in 2013, and that season took two more podiums too.

From Moto2™ he moved to WorldSBK for 2015 and added another feather to his cap with a race win at the end of the season in Qatar, impressing once again. 2018 then saw ‘Spanish Elvis’ make five appearances in MotoGP™ as a replacement rider, and he scored a point in the season finale – no mean feat in one of the closest eras in Grand Prix history. 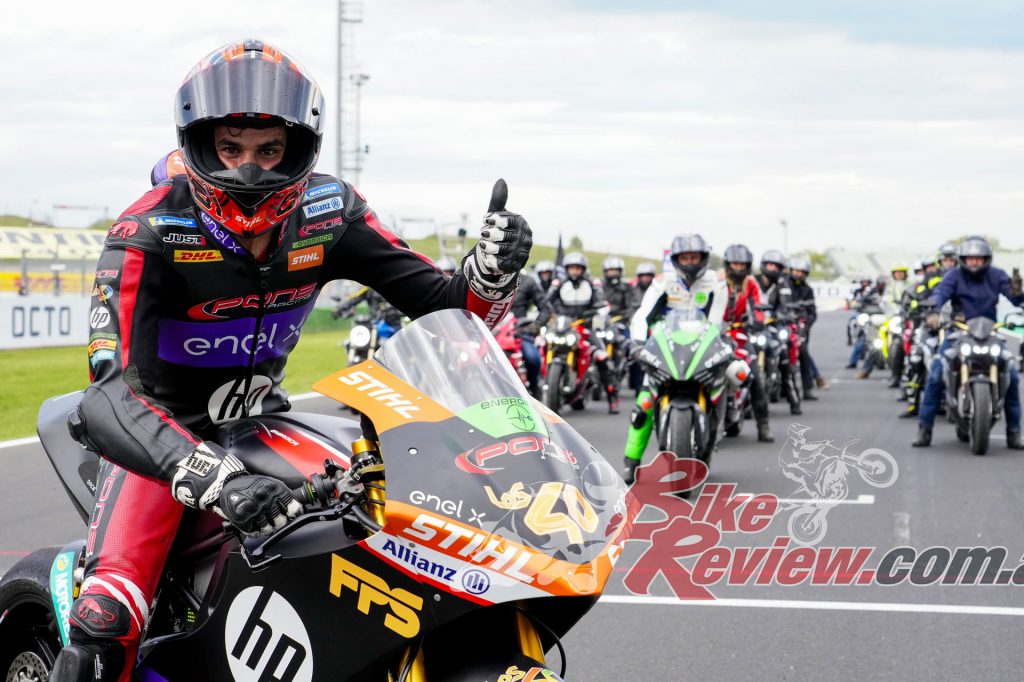 2020 saw Torres take on MotoE™ for the first time, and the Spaniard got first podium on home turf in the second race of the season at Jerez. He took two more podiums at Misano and then, in France, tasted the top step for the first time in the electric series. He wrapped up the crown the next day.

This year, the rookie had become the reigning Cup winner and Torres had a target on his back. But he kept it calm – and fast – and started the season with a podium in Jerez. Another came at Catalunya, and Assen, and the Spaniard arrived at the double-header finale with a very real shot at the crown. In Race 1 the gloves came off and he battled for the win, able to sneak through at the final corner amid some drama, and that saw him heading into the last showdown of the season ahead. 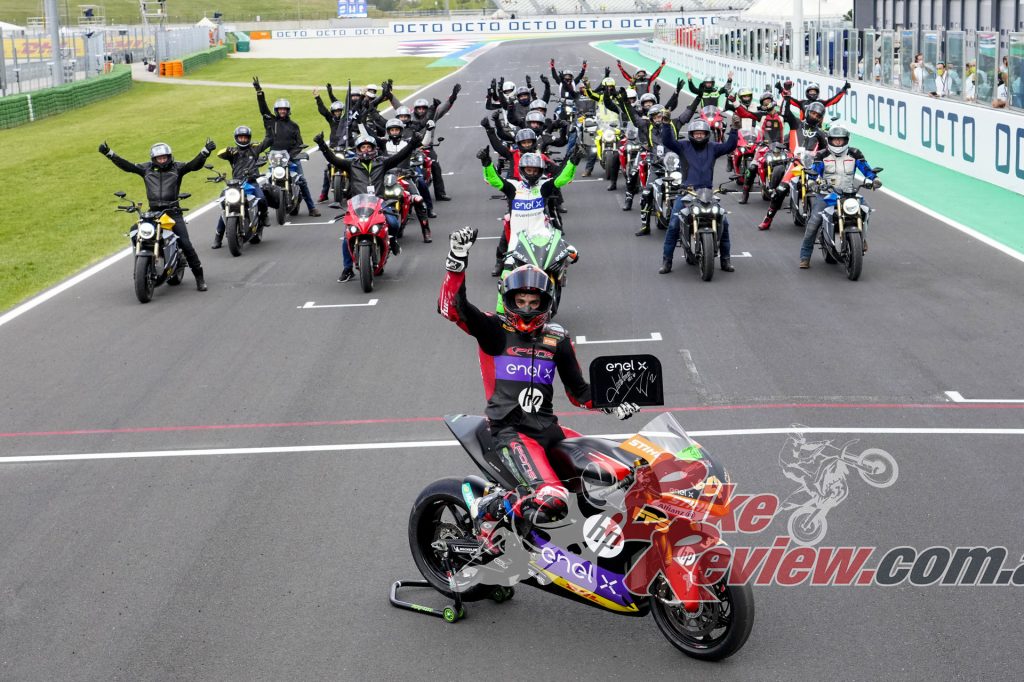 After an incredible duel against closest rival Dominique Aegerter, Torres had contact from the Dynavolt Intact GP rider and slid out – remounting for P13. And in the end that was just enough for the crown, with the Swiss rider receiving the equivalent of a ride-through penalty to drop him to P12.

Jordi Torres: “When I saw the result and the flag I started to cry, I felt down, I felt like I was a loser and lost the title. I tried to squeeze the maximum in this race and focus 100% to do my pace, and when Domi tried to overtake me I tried to be calm to not make a mistake and manage well the situation. But all this work I did, and the work my team did all this year to arrive here, it’s like well.. all this in the rubbish and start again! I cried and arrived to my people, when I entered the pits they all said ‘ok take a break, don’t worry, we’ll see what happens’. I was still crying, and then when I saw the result from Race Direction it became happy tears, a rollercoaster of emotion, and I’m tired now after that!”