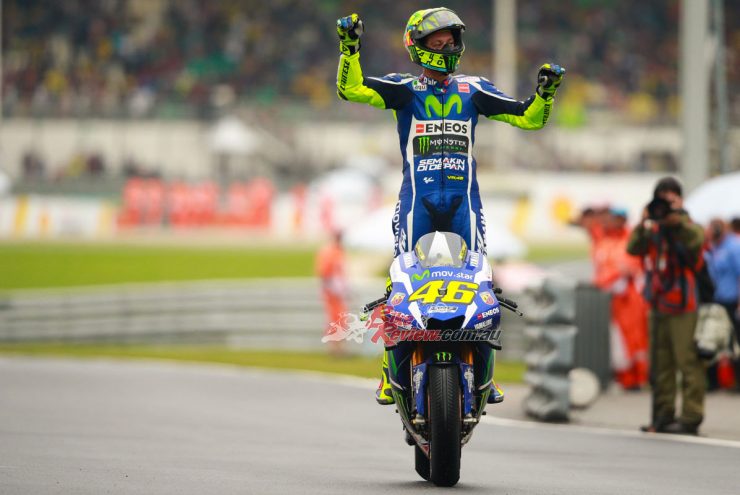 After another stunning year of racing, it’s time to bring the curtain down on 2021. But it’s not just any season finale this time around, it’s one that will stay long in the memory by default as the paddock bids farewell to one of the all-time greats, Valentino Rossi… 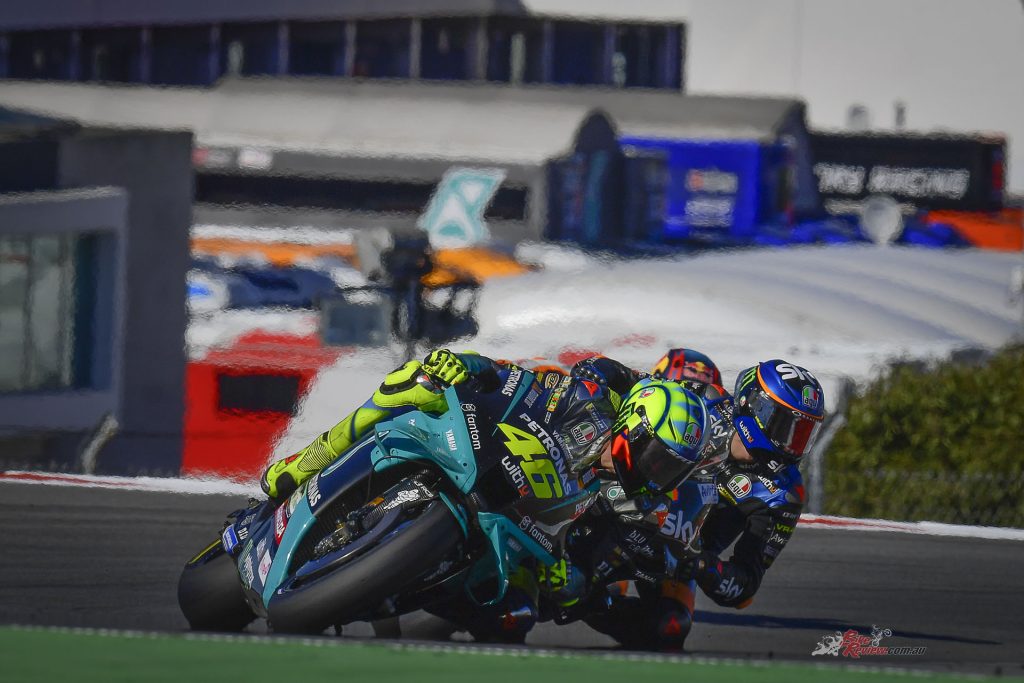 26 seasons later, after over 44% of all Grands Prix staged after 70-year history of the sport, Valentino Rossi bows out.

As the sea of yellow fans enjoy their final appointment with the ‘Doctor’, part of his legacy will already be lining up alongside him on the grid, including most recent winner Francesco Bagnaia (Ducati Lenovo Team). Pecco was – according to the review of 2020 Champion Joan Mir (Team Suzuki Ecstar) – almost perfect in Portugal, with his metronomic pace and incredibly consistent laptimes compounding that feeling even further for everyone looking on. But Valencia is somewhere the Italian says he’s sometimes struggled, so it could be an interesting one to watch him take it on as a breakthrough season comes to a close.

Read our farewell to the legend here…

Last year though, there was already some good Ducati form at the venue – and more good form from the first VR46 Academy rider to take to the top step in MotoGP™. That duel between Franco Morbidelli (Monster Energy Yamaha MotoGP) and Jack Miller (Ducati Lenovo Team) was an instant classic, showing more Borgo Panigale pace at a track not traditionally a hunting ground for them. But as Miller says, the days of X strengths and Y weaknesses in the bike are largely a thing of the past, so he and Pecco can be expected at the front. 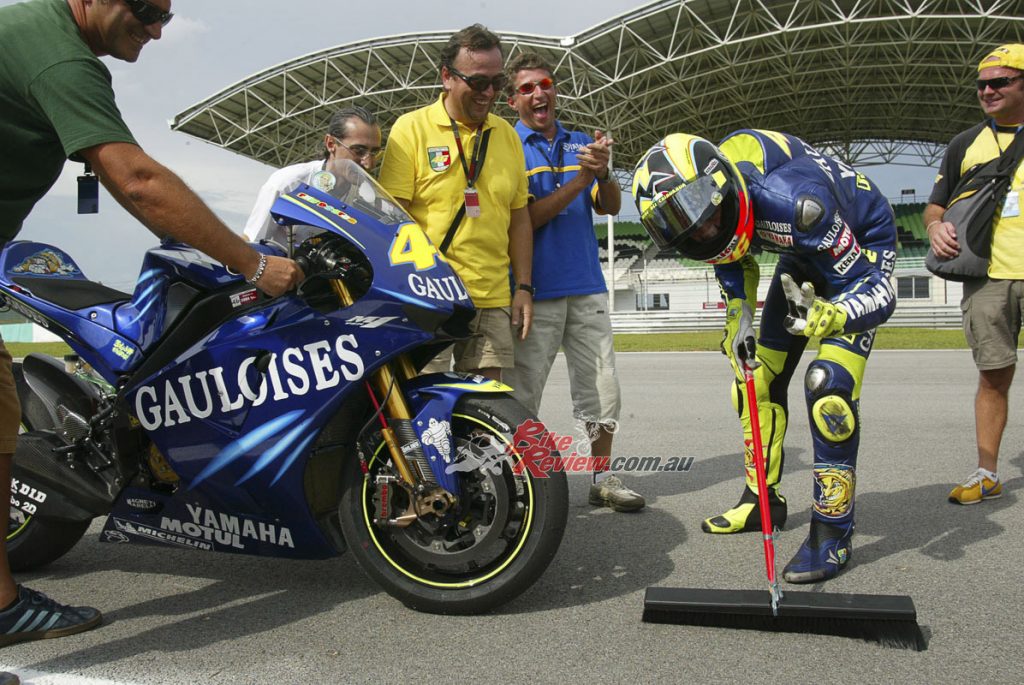 Morbidelli will want to use his good memories as a springboard to move forward once again, and Andrea Dovizioso (Petronas Yamaha SRT) will want to end the season on a useful note ahead of taking on the new spec machine for next season. Valentino Rossi will, of course, be guaranteed most of the limelight, but Fabio Quartararo (Monster Energy Yamaha MotoGP) will try and wrestle some back. For a venue that’s treated Yamaha pretty well – the Iwata marque has eight wins here, only two off Honda’s haul of 10 – the reigning Champion hasn’t got the best record, so he’ll be looking to put that right and bounce back in style from a crash at Portimão and his only DNF of the season so far. With Ducati now in the hot seat in the fight for the teams’ title – and having already wrapped up the Constructors’ crown, there’s still plenty on the line.

As that Morbidelli-Miller duel rounded out the season in 2020 though, Mir was arriving into a race weekend not only as a man on the edge of glory but also as a first time premier class winner. Consistency and podium pace was his calling card last year but that win finally came – although Styria looked like it could have been close – at the Circuit Ricardo Tormo. This time around Mir’s third overall and the title fight is over, but he arrives from some serious form on the Algarve, including his first ever MotoGP™ top three in qualifying. Mir was Bagnaia’s main challenger and Valencia swings the form book in the Suzuki rider’s favour. Alex Rins (Team Suzuki Ecstar) also took a front row at the European GP last year and followed Mir home for a Suzuki 1-2, and the number 42 also sliced through to fourth in the season finale. Can the Hamamatsu factory take that first win of the season? 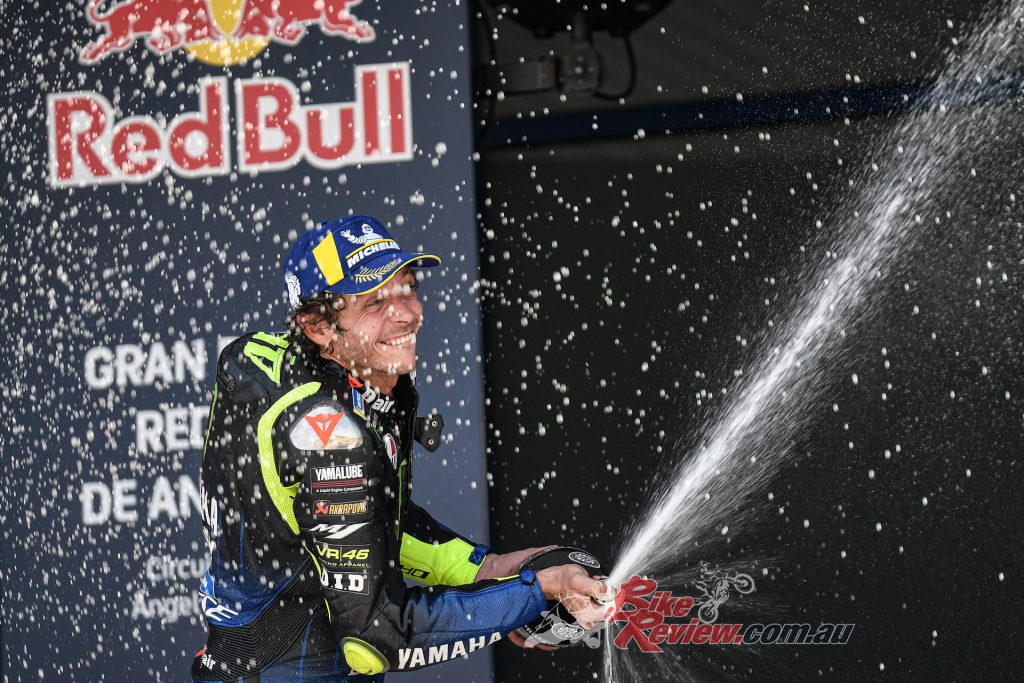 There’s also the fight for Rookie of the Year that will be decided. Incredibly, it’s now only three points between Enea Bastianini (Avintia Esponsorama) and Jorge Martin (Pramac Racing), with the Italian just ahead. Martin has arguably the better record at Valencia though – having taken his maiden win at the track in Moto3™ – and it’s home turf too…

Valencia is also home turf for Alex Marquez (LCR Honda Castrol) and the number 73 arrives from a great duel with Miller in Portugal, taking top Independent Team honours in the race and nearly taking another premier class podium. To repeat the feat he’ll have to fight off Johann Zarco (Pramac Racing), who wrapped up top Independent of the season, as well as the Rookie of the Year duellers and the likes of LCR teammate Takaaki Nakagami (LCR Honda Idemitsu), who has a great record at Valencia. Aleix Espargaro (Aprilia Racing Team Gresini) will want to go better than his Valencia form so far too as Aprilia keep making progress. 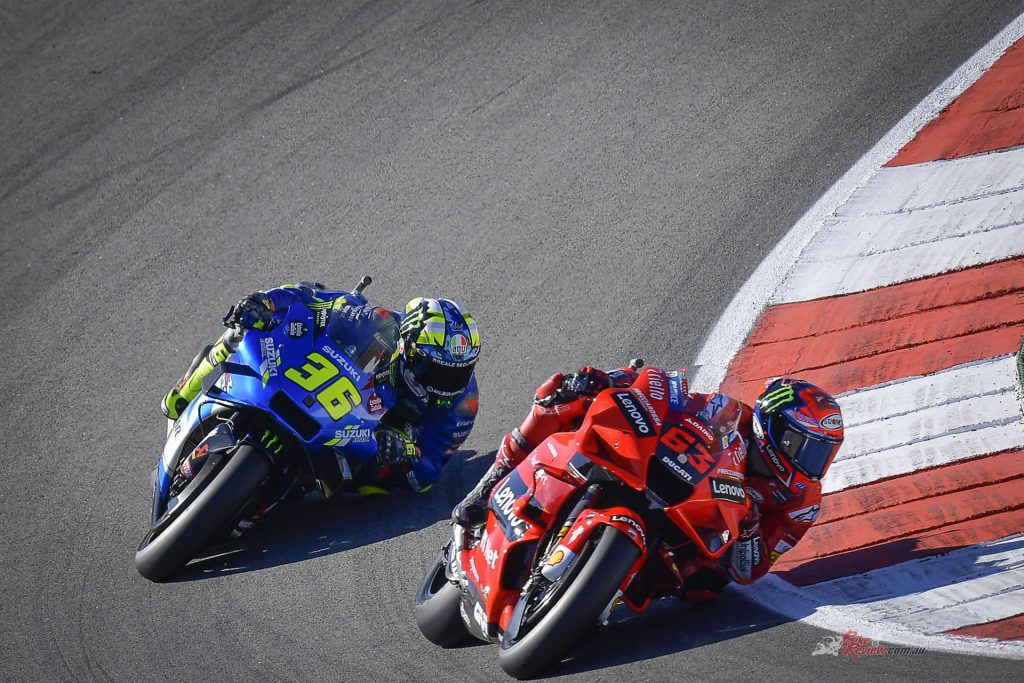 Despite Marc Marquez being on the sidelines, Honda’s record at the track – those ten wins – make for good reading, and that’s something both Alex Marquez and Nakagami will take more motivation from too. As will Pol Espargaro, who’s had three MotoGP™ podiums at Valencia before arriving at the Japanese factory, and he’ll want another one with Honda to end the season well.

Those aforementioned rostrum finishes for Polyccio were with KTM, for whom Valencia has hosted some history: their first podium in the premier class back in 2018 and then two more last year too. Brad Binder (Red Bull KTM Factory Racing) and teammate Miguel Oliveira also have some serious form at the Circuit Ricardo Tormo in the lower classes, and will be looking to end the year with some bigger finishes. For Tech3 KTM Factory Racing it’s also an emotional one, as both Danilo Petrucci and Iker Lecuona bid farewell to MotoGP™. Can they go out swinging? 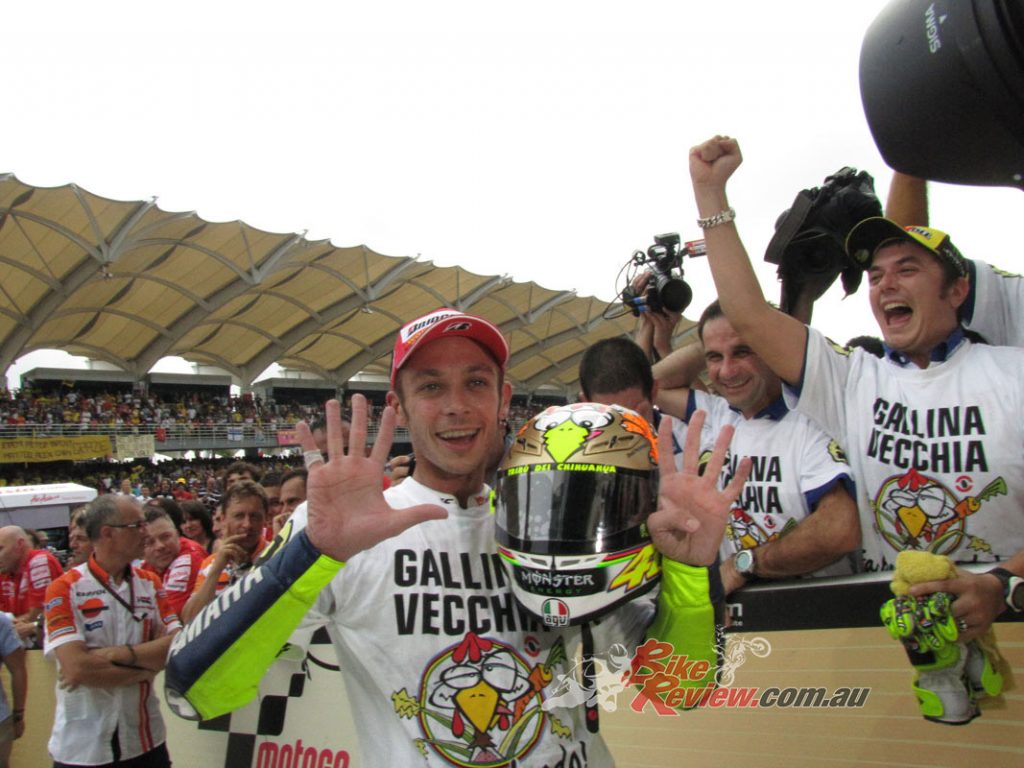 Arrivederci, farewell, ciao, but not goodbye. VR46 will remain a presence in the paddock; a legend for millions of people and the sport itself. Petrucci and Lecuona take on new challenges… and everyone takes on the Circuit Ricardo Tormo for one more time in 2021. Tune in at 14:00 (GMT +1) on Sunday for the Doctor’s last dance and final fiesta!

Moto2
There have been a number of key moments throughout the 2021 Moto2™ season, but none as big as the last two races. A crash for Raul Fernandez (Red Bull KTM Ajo) out the lead in Emilia-Romagna and then a win for Remy Gardner (Red Bull KTM Ajo) on the Algarve, despite a crash for the Australian earlier in the weekend that left him bruised, have set up a final showdown that sees Gardner arrive with a huge 23-point lead. 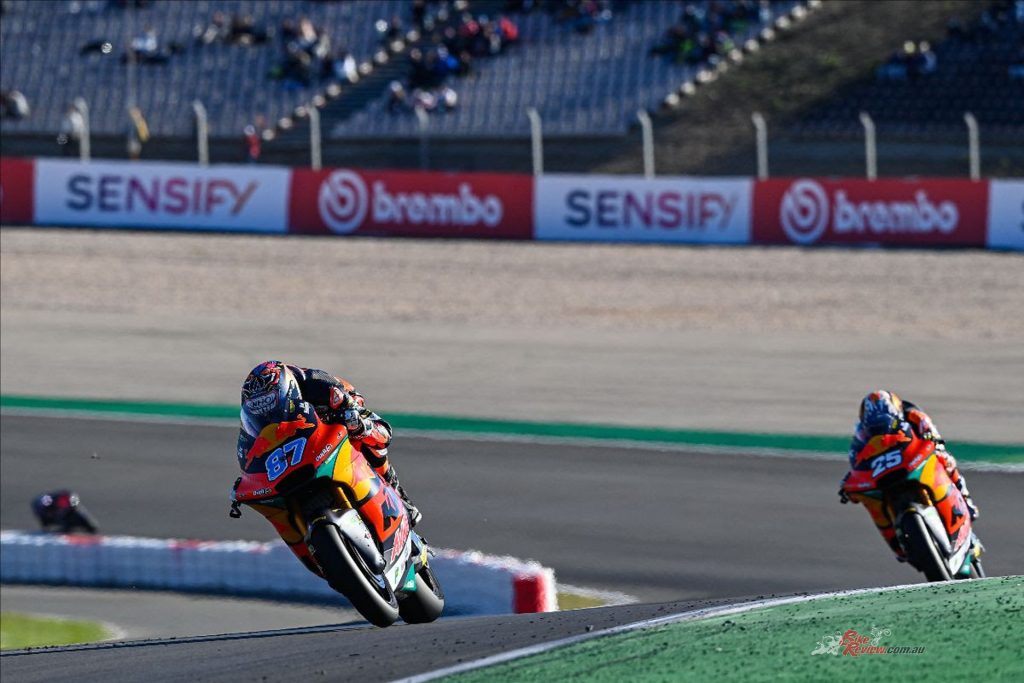 With Sam Lowes (Elf Marc VDS Racing Team) so close to taking on Raul Fernandez on the final lap in Portugal, the Brit could have decided the title for those ahead of him then and there as well. But he didn’t, and instead we take on the Circuit Ricardo Tormo, with Gardner arriving with a big lead and on the back of a serious statement win last time out.

In pain and having not taken to the top step since Silverstone – during which time his teammate took three wins – if there was a moment for Gardner to crumble, that was it. But instead, the Australian dug deep and came out swinging to add another five points to his advantage and set himself up with a simple job to do in Valencia: even if Raul Fernandez wins, Gardner needs just 13th to wrap up the crown. Can he do it? 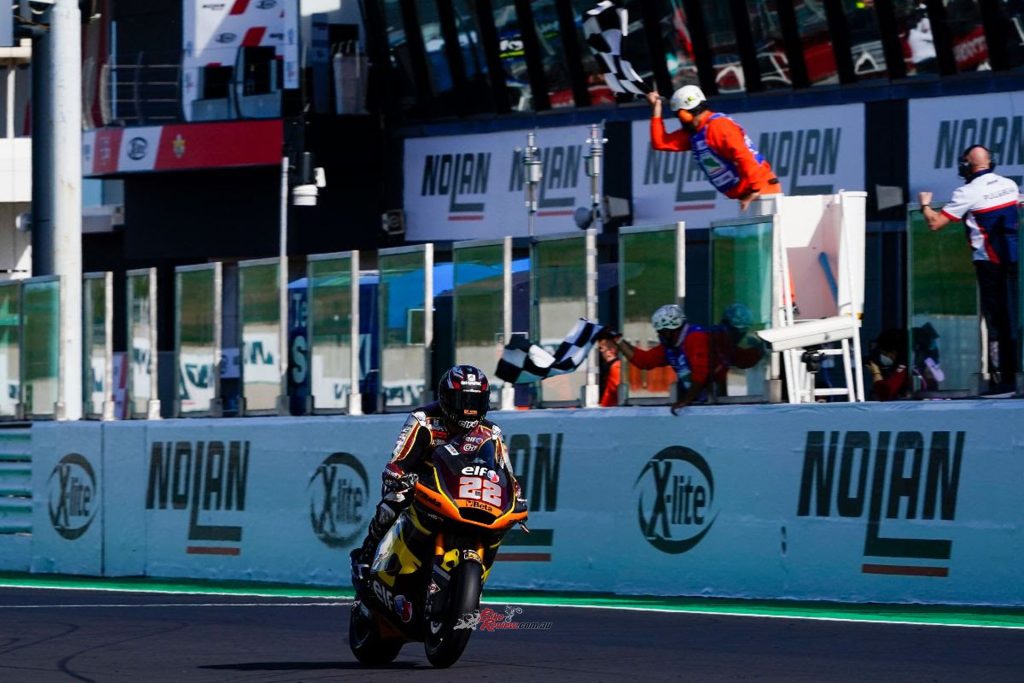 The good news for Raul Fernandez is that the Circuit Ricardo Tormo holds good memories, and was the scene of his first Grand Prix win in Moto3™. He won’t go out without a fight and he has a good chance at victory on paper, then left to see how the cards fall in the title fight. And there are more than just two riders on the grid…

Lowes arrives from a win and a third in good form, and his teammate Augusto Fernandez can’t be counted out. Marco Bezzecchi (Sky Racing Team VR46) is having some trouble with his knee but will want to leave Moto2™ on a high, although official confirmation of his move to MotoGP™ remains pending. Fabio Di Giannantonio (Federal Oil Gresini Moto2) is also premier class bound and will want a big weekend, but two hometown heroes in particular will want to get in absolutely everyone’s way: Aron Canet (Inde Aspar Team) and Jorge Navarro (Termozeta Speed Up). 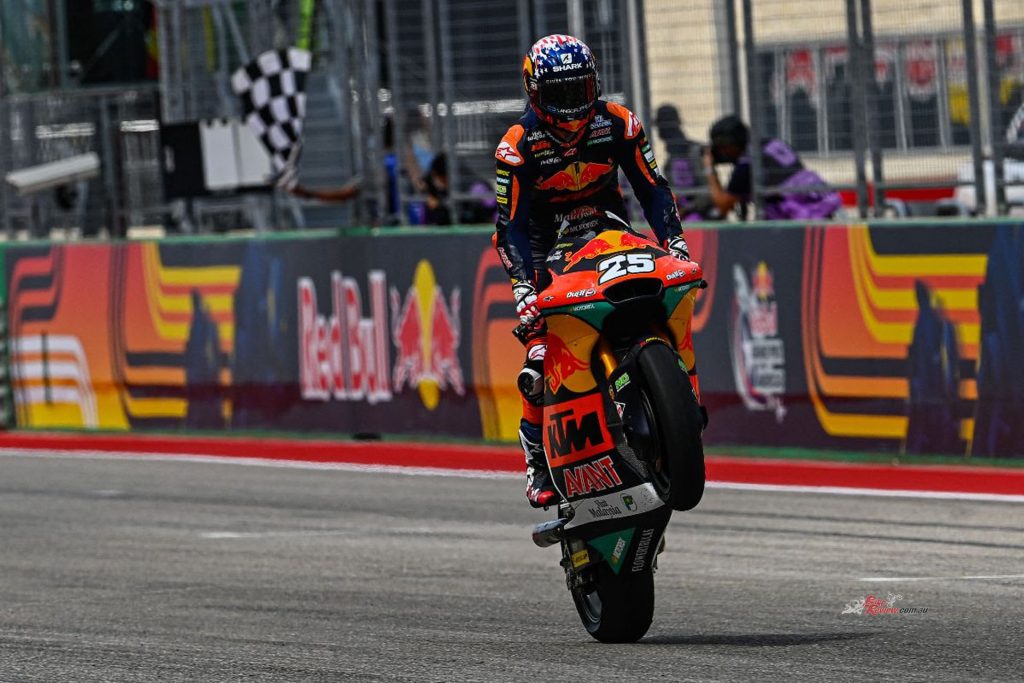 Canet has had some impressive podiums this season and was fourth in Portugal too, and he’ll want to leave his fellow home heroes the Aspar Team with a few more good memories. Fellow Valencian Navarro has some hometown pedigree too and will be aiming high. They have a lot less on the line than many as well, racing solely for the podium or victory…

Can Gardner keep his cool and make sure he takes those valuable few points? Will Raul Fernandez come out swinging and take that final win to force the Australian’s hand? We’ll find out on Sunday as Moto2™ go racing from 12:20 (GMT +1)… and a new World Champion will be crowned!

Moto3
After a dramatic finale to the Moto3™ race on the Algarve, the title is decided and the pressure is off as the paddock heads north for Valencia and the final showdown of the season. Newly-crowned Champion Pedro Acosta (Red Bull KTM Ajo) can now get the gloves off, and Dennis Foggia (Leopard Racing) has chance to end the season on a high with a win. But looking at track records, it could actually be Sergio García (Valresa GASGAS Aspar Team) calling the shots at Ricardo Tormo. 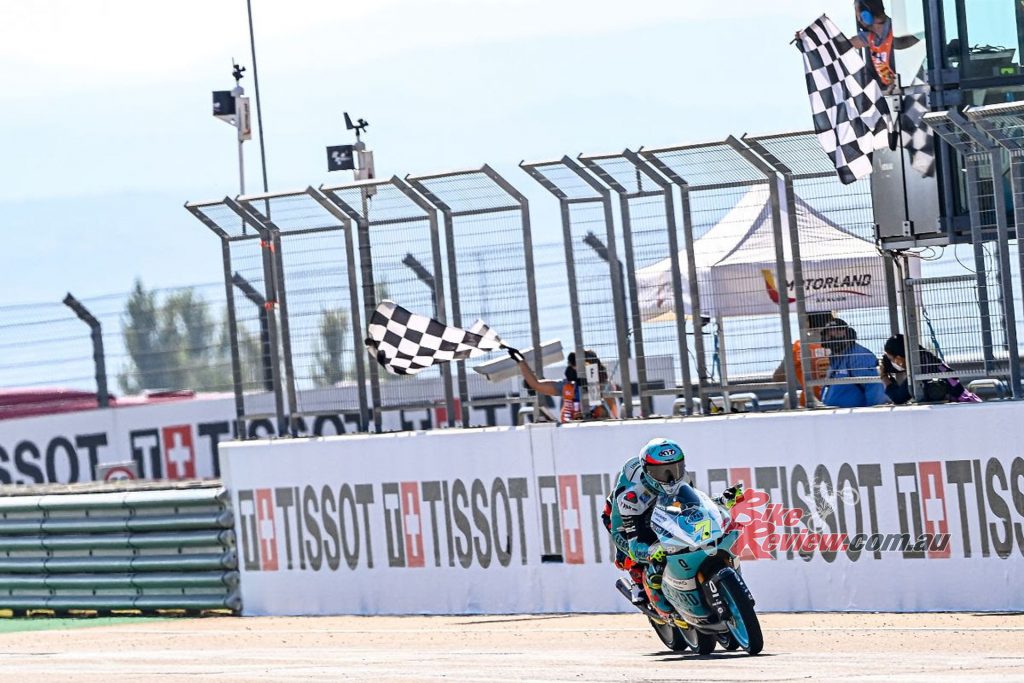 Garcia made a stunning return at the Algarve GP, bouncing back from his injury struggles to take his first ever pole position. He said he’s 100% fit and seemed it on Sunday, fighting for the podium throughout before getting caught up in the incident that also took down Foggia. Could he have taken on the Italian and Acosta on the final lap? We’ll never know, but we do know he’d likely try.

We’ve seen García grow into a fast, reliable frontrunner this season, with some well-judged aggression when needed, and now it’s time to take on his home track – where he took his first Grand Prix win, and where he was the rider to beat in the FIM CEV Repsol too… can he get back on the top step to round out the season in style? 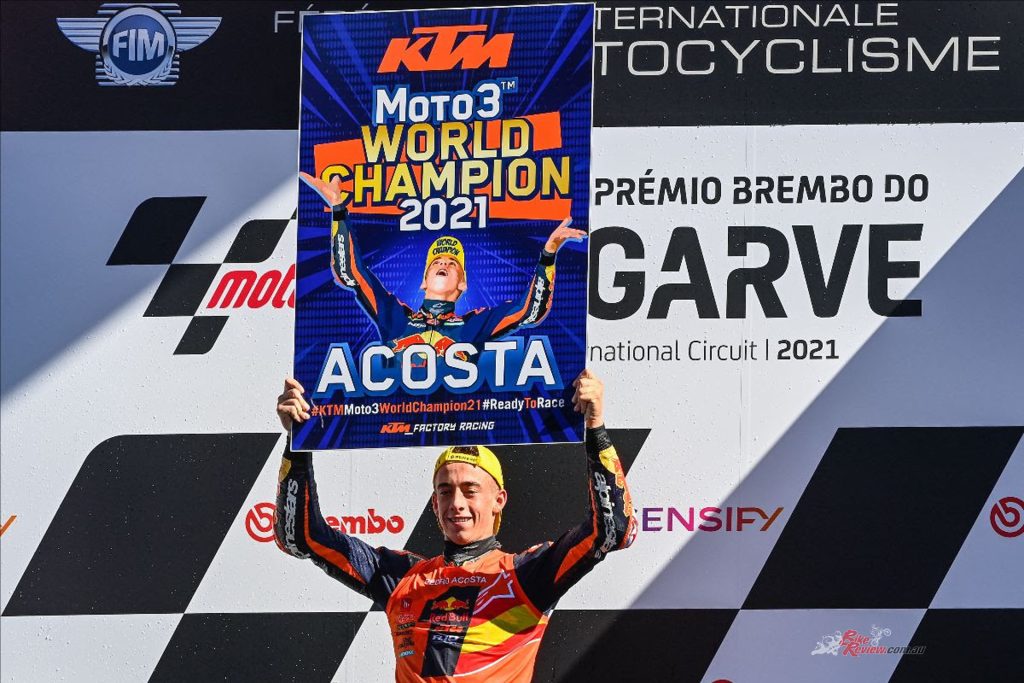 Acosta and Foggia will definitely put up a fight, as will the likes of Andrea Migno (Rivacold Snipers Team) and Niccolo Antonelli (Avintia VR46 Academy) fresh from the podium. Ayumu Sasaki (Red Bull KTM Tech3) had a solid run to sixth despite a Long Lap too, and had Izan Guevara (Valresa GASGAS Aspar Team) for company after a more under the radar weekend for the rookie – but another good haul of points. Darryn Binder (Petronas Sprinta Racing) will also want to atone for the crash that took down García and Foggia, and sign off from Moto3™ on a high ahead of his jump to the premier class.

The Championship is wrapped up but there’s plenty still at stake in the final round of the season, with the gloves now able to come off. Can Acosta take another win on his way to Moto2™? Will Foggia get straight back to his race leading ways? Or has García returned to ruin the party? Find out on Sunday 14th November at 11:00 (GMT +1) as the class of 2021 saddle up together for the final time.