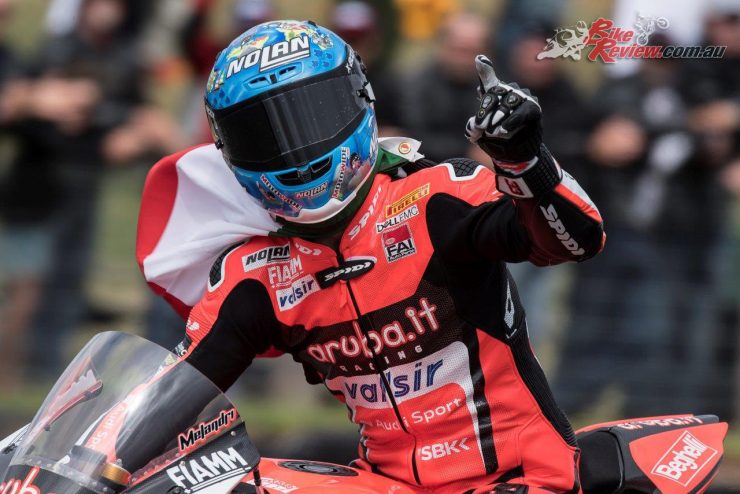 Italian veteran Marco Melandri has scored a resounding win in the opening race of the 2018 MOTUL FIM Superbike World Championship at Phillip Island.

The oldest rider in the field at 35, Melandri (Ducati) passed long-time leader and polesitter Tom Sykes (Kawasaki) on lap 19 and then remained in control for the balance of the 22-lap race. 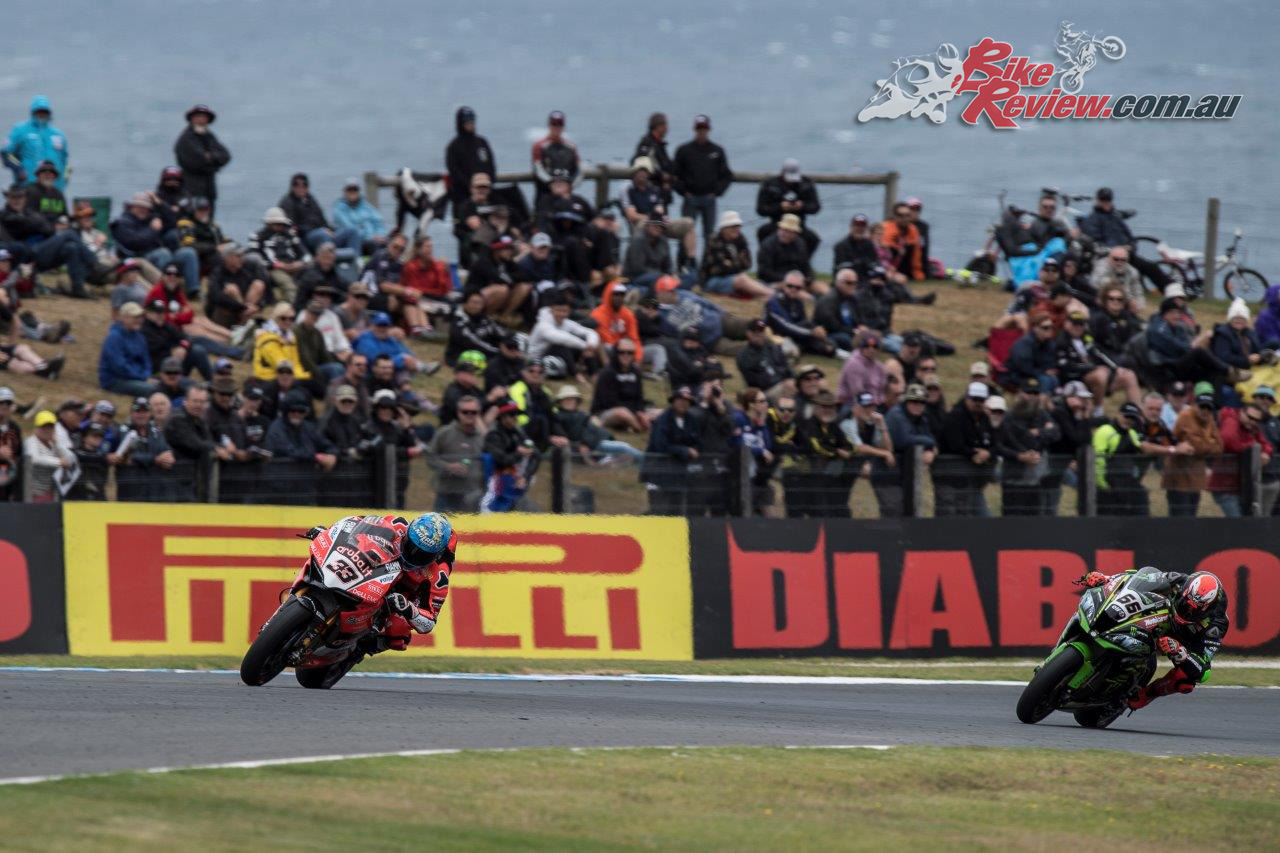 Melandri beat Sykes to the finish line by a narrow margin

In a fast-paced battle from the get-go – an incongruity at Phillip Island where it’s often a game of cat and mouse until the last few laps – he won by 1.180 seconds ahead of Sykes, with Chaz Davies (Ducati) a further eight seconds back in third position.

It was Melandri’s 21st victory in WorldSBK competition and his first at Phillip Island. His affinity with the seaside circuit is now bordering on legendary, as he’s also won grand prix races at the venue in the 125cc (1999), 250cc (2002) and MotoGP (2006) classes. 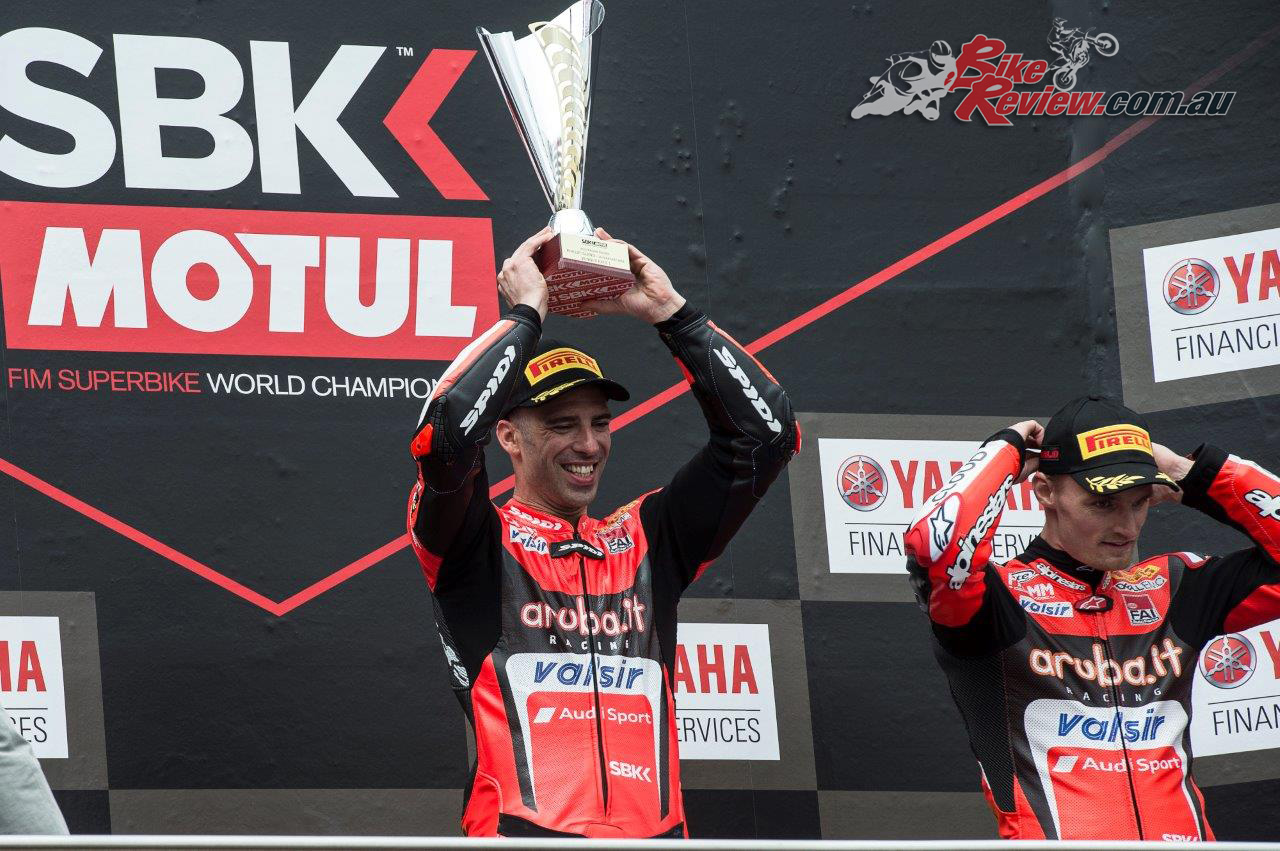 “To win the first race of the season is amazing,” said Melandri. “It was a very difficult race. Tom set an amazing speed during the first part of the race, but after a year back with Ducati I am much more aware of my potential. For sure the other riders will be stronger tomorrow, and a lot will depend on the weather.”

Ducati’s last WorldSBK win at Phillip Island was in 2013 with Spaniard Carlos Checa. Overall, Ducati now has 23 wins at Phillip Island, with Aussie legend Troy Bayliss a major part of that success.

Meanwhile, Sykes’ rear tyre called it a day with five laps to go, but he was still delighted with his performance. 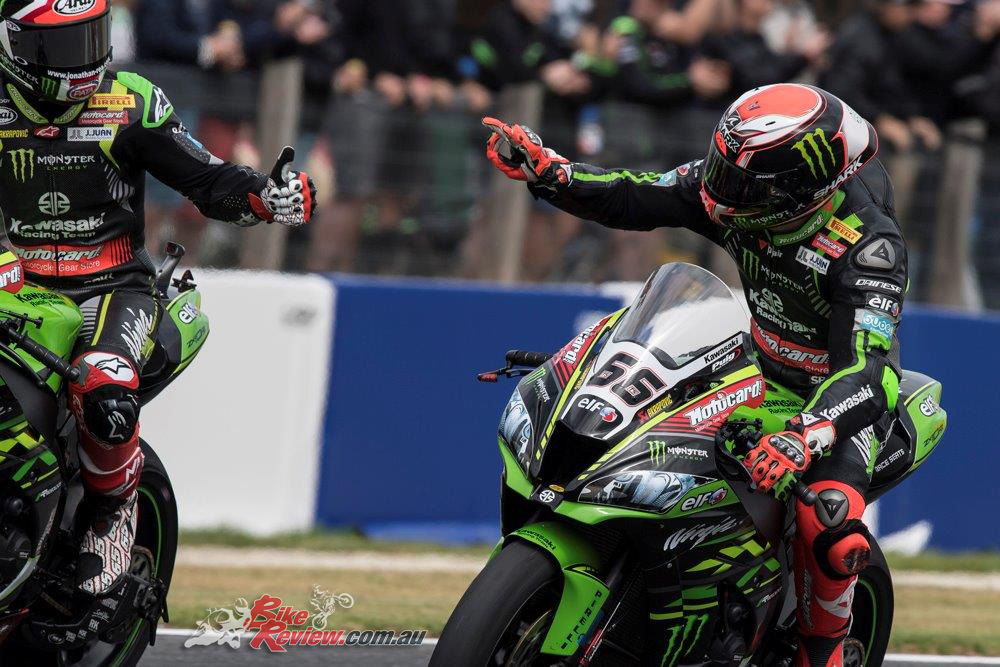 “This is the strongest start to any season in my career,” said Sykes. “Marco put in a strong race, and I knew he would be there at the end. Still, I tried to break him about two-thirds distance in but he just had a little bit better tyre and road it home.”

Spaniard Xavi Fores (Ducati) finished in fourth position ahead of world champion Jonathan Rea (Kawasaki), who circulated in second position for over half the race before his pace dropped away alarmingly in the last few laps – so much so that he was easily swallowed up by Davies and Fores on the penultimate circuit. 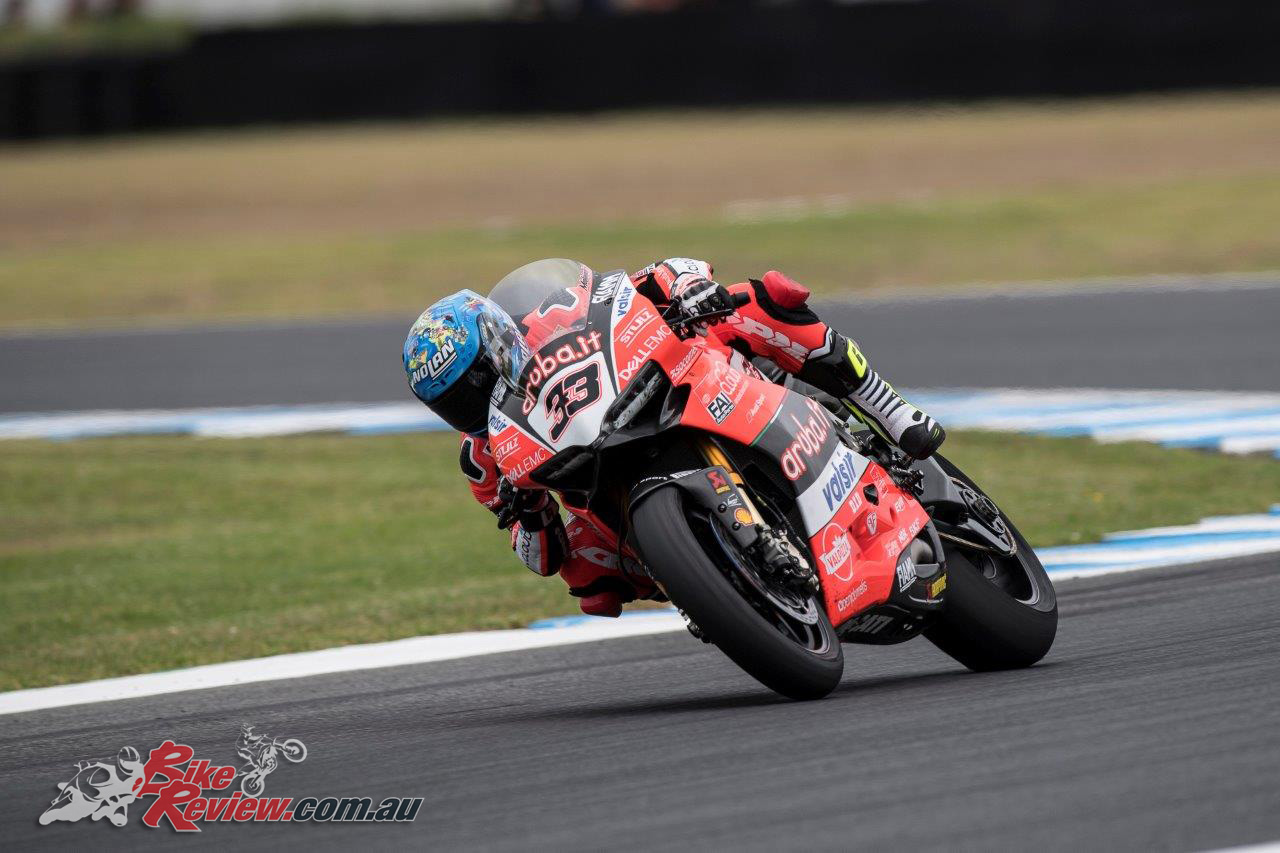 There were 16 finishers and five retirements – including Jordi Torres (MV Agusta) and the Aussies Wayne Maxwell (Yamaha), Troy Herfoss (Honda) and Daniel Falzon (Yamaha). Maxwell crashed on lap two, while his compatriots were forced out by technical problems.

The award for the biggest exit went to Columbian Yonny Hernandez, who was spat off hard at turn six. 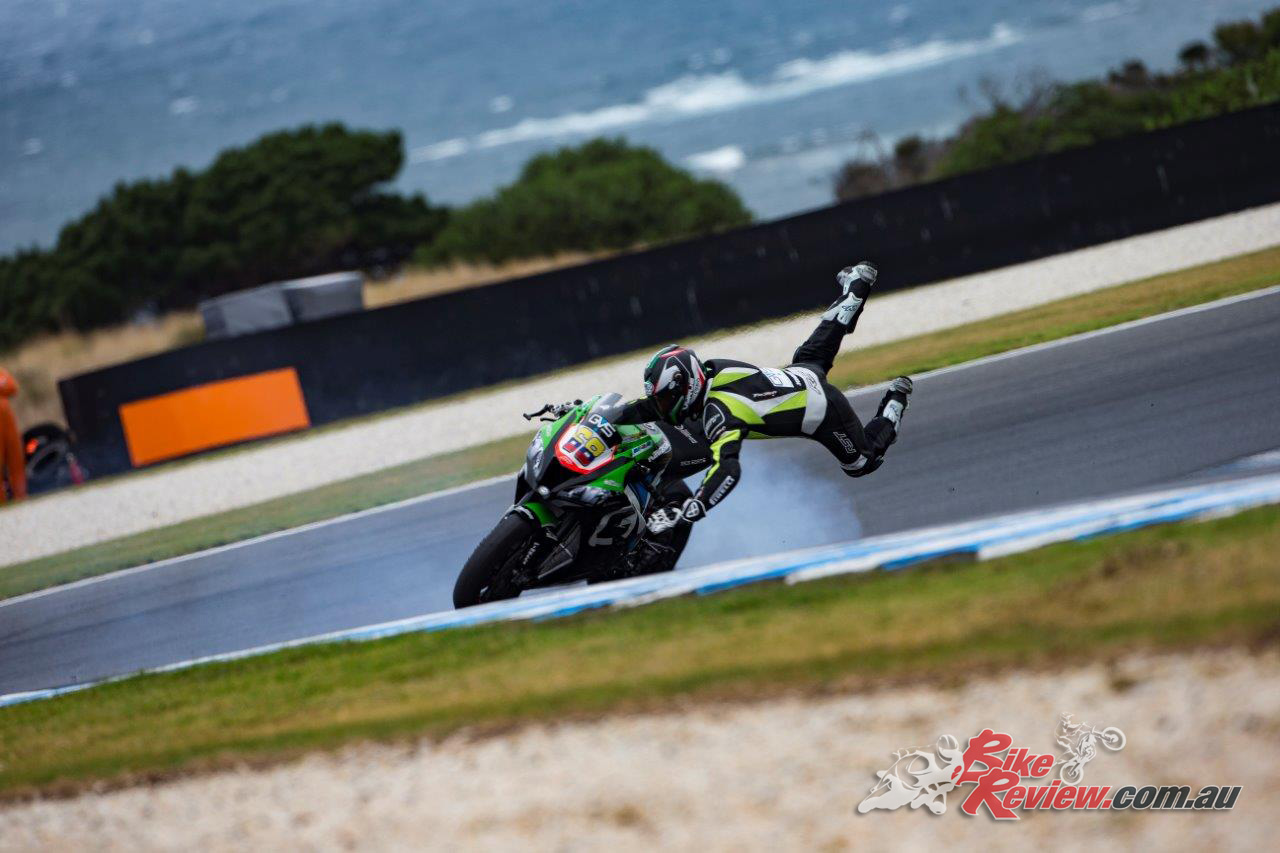 Italian Lorenzo Savadori (Aprilia), who was the fastest man on track yesterday, didn’t start after breaking his collarbone in Superpole qualifying early this afternoon.

Race 2 for the world superbike Yamaha Finance round at Phillip Island is scheduled for 3pm Sunday.

HUGE WSBK WEEKEND AHEAD FOR FANS!

The opening round of the 2018 MOTUL FIM Superbike World Championship Yamaha Finance round will feature the 22-lap WorldSBK races on Saturday and Sunday, the 18-lap WorldSSP race on Sunday, and 12 national support races during the weekend across superbike, supersport, supersport 300 and YMF R3 Cup. Aussie WorldSBK icon Troy Bayliss will make his racing comeback in superbike.

It’s not too late to grab your tickets for Sunday either! And as always with World Superbikes, kids 15 and under are free^, as is your bike.